Between the Ordinary and the Extraordinary

I visited Naegok-dong at the beginning of spring following a long winter. Although it was my first visit, I found the N House with ease because of its distinctive character within the village. The heavy-looking exterior of the building stands out amidst the sea of detached houses, multi-family houses, and apartment complexes in the village. Finished with black clay brick, the mass of simple curvature with few windows appears solid and heavy.

The curved wall that tracks the site’s boundary protrudes slightly as it ascends, like the overlapping of fine feathers. This gravity-defying design renders the appearance of the heavy brick building as relatively light. In this way, traces of the more elaborate finish applied strategically by the architect to the exterior can be found everywhere; sharp edges through carved brick, entrances emphasised by a curved surface with high curvature unlike the other section, the arrangement of deep windows on the second and third floor, and the pattern of a perforated brick wall at the centre of the house.

Casting deep shadows, the balcony window in the living room (reminiscent of Bae Bien-U’s photograph of pine trees) blocks the sightline from outside, and is more active in drawing the pine landscape into the house. The ceiling lighting in the living room, made of ordinary glued laminated wood, presents a delicate atmosphere. The curved staircase is lit by the sunlight that filters in through the perforated brick wall. The density of gaps between bricks was controlled by turning them slightly based on the calculation of a visual opening. Instead of ready-made bricks with three holes, customised bricks have been used to raise the degree of completion in masonry and to prevent awkwardness. However, the one-directional staircase leading along this wall from the first floor up to attic seems a little risky, particularly in terms of the visual aspect. 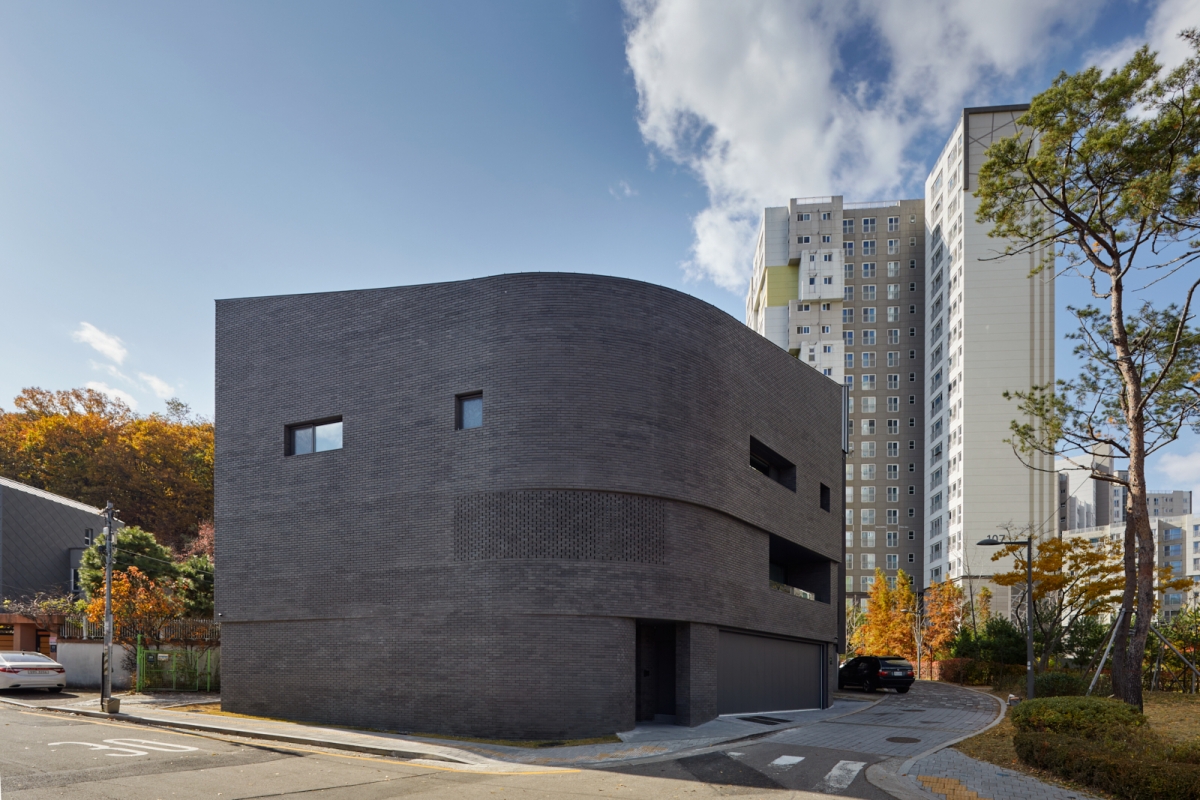 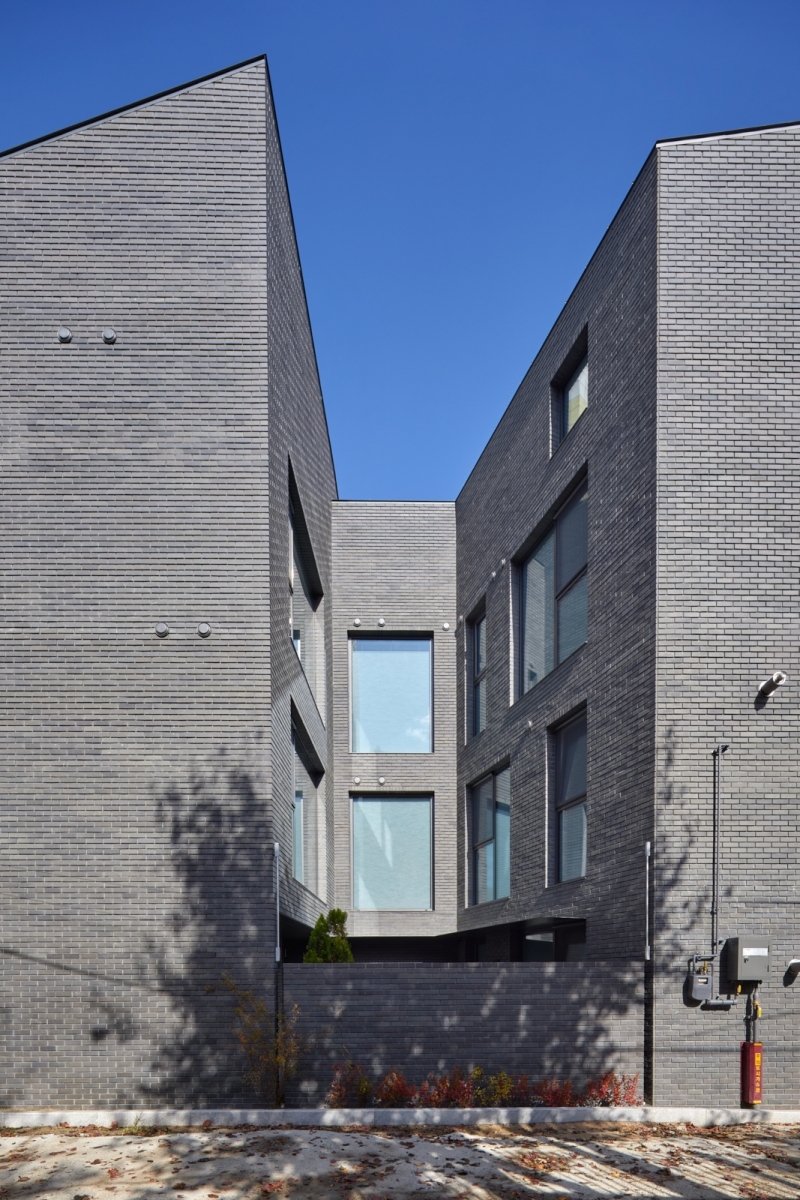 How were these sophisticated architectural devices realised? It may have begun with the simple concept of securing natural light by minimising windows in the north façade and increasing their number on the south-facing façade. N House is located at the corner of the entrance to a residential area in a public housing site among a handful of them in Gangnam, Seoul. The site meets a road to the north and east, a neighbouring wall to the west, and an alley extending into the residential area to the south. The architect planned a less conspicuous curved wall along the road as if filling it in with the village as background. A small yard has been created to the south towards the alleyway to secure better light and views, and a fence was placed on ground level to reduce external interference and to protect privacy. This resulted in a C-shaped mass. This design process, in order to determine layout and the configuration of the house, is plain and easy to predict. Bricks, the main material of this building, are popular among clients these days, and a familiar material often used by SOSU ARCHITECTS (hereinafter SOSU) in their projects.

So far, one may expect that SOSU carried out an relatively ordinary, predictable design process to decide upon the layout, design, and materials. However, the detailed process behind determining the concept for the façade and the realization of this structure is on another level entirely. Frequently, detached houses on housing developments directly reflect the desires of architects or clients before considering their urban context. This is a pattern that recurs in many New Towns, such as Pangyo, Ilsan, Gwanggyo, and Wirye, known as housing fairgrounds for those planning to build detached houses. All the houses there focus on a unique formal language and distinctive use of materials. Although all of these developments have achieved architectural completeness, it is no exaggeration to say that a very limited contextual understanding or harmony can be found among them. 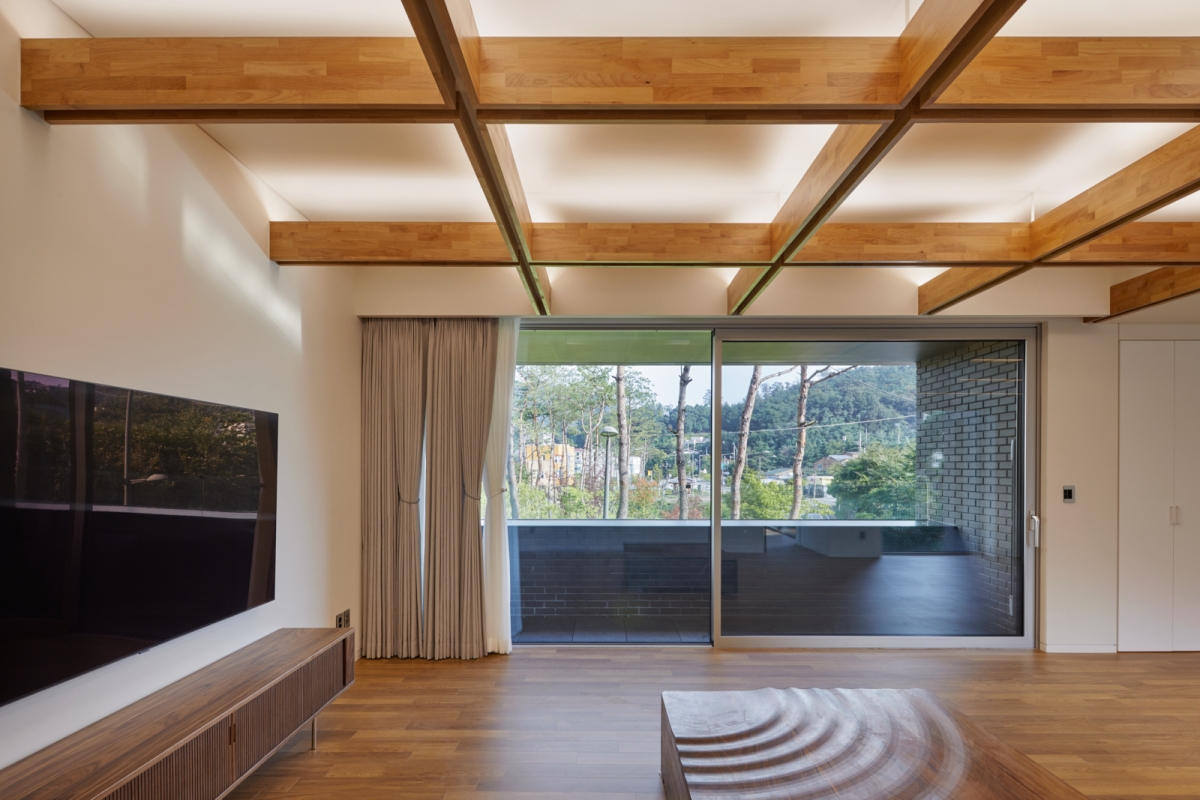 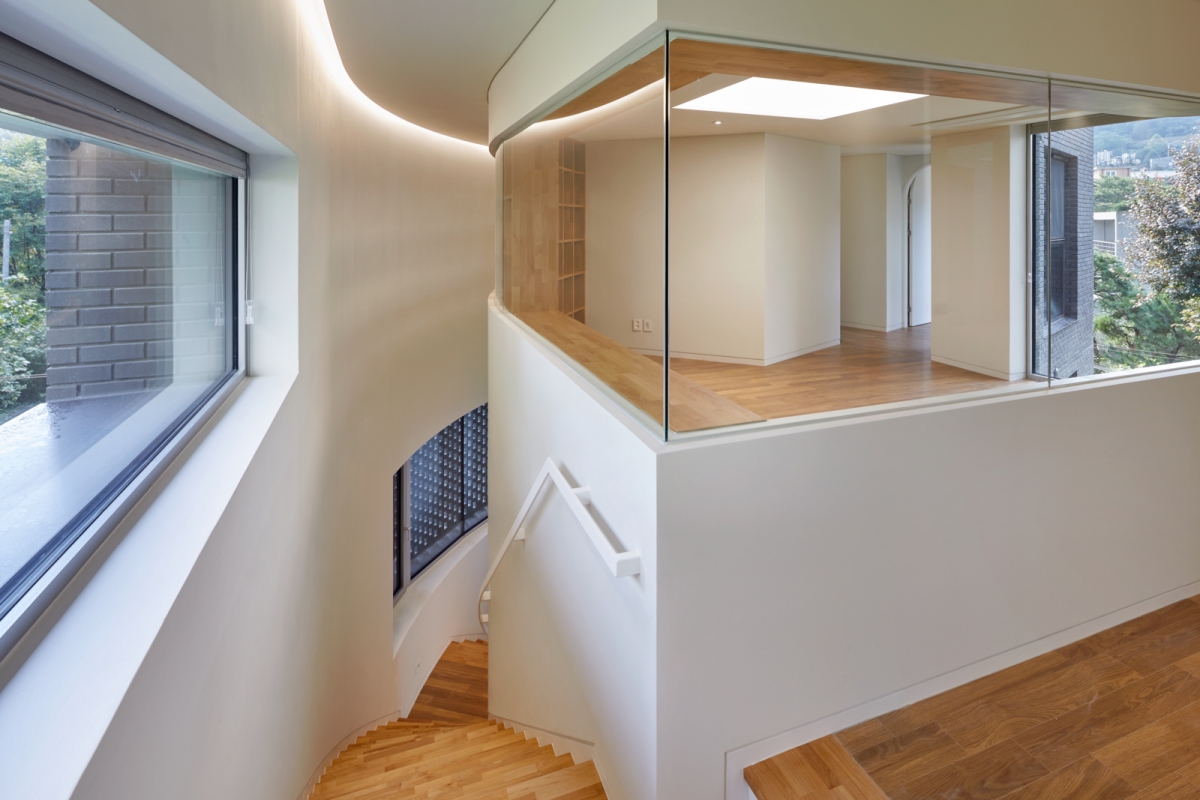 Between Houses and Real Estate, a Work and a Masterpiece

What kind of position must an architect adopt in a housing market that privileges private desires in the public space of a city? This would have been a difficult and important challenge acknowledged by SOSU. They explained their position convincingly, ‘It was a difficult issue, concerning how far one should consider its public facing nature while also protecting the characteristics of a detached home in the urban context of a strong public site. I couldn’t put aside this issue at any point, from the beginning to the end of the project’.

SOSU has responded to the needs of contemporary villages and cities by creating a backdrop of plain and calm expression through black brick. They have revealed their individuality through variations in space, scale, and materials. This work of elaborately matching interiors and exteriors, and parts and whole, must have been a difficult process. What I notice is that all of the architectural devices have been implemented only with black clay brick of standard size (190x90x57mm), rather than with nonstandard bricks or long bricks. Their attitude to this material is shrewd as they lay and coordinate small units in order to complete the whole. They used bricks in various ways in the right places, and adopt customised orders and cuts if necessary.

Hidden Behind a Wall

Each room is arranged by reinterpreting the areas typically considered private or open in N House. At this point, the architect took a more passive attitude. First, the garden, which involves a lot of contact with the outside, plays a shrinking role. Here, the garden is just a device that draws light into the interior, maintaining distance from the surroundings for privacy. Unlike that of a typical house where a living room, kitchen, and dining room surround a garden, there are not many spaces that try to connect directly or indirectly to the garden. It can be accessed only from a guest room and a playroom on the first floor. Residential space emerges in earnest on the second floor, but it functions only as a private area with scrupulous division of the inside and outside spaces. Since the garden is not the central living space, the view toward the outside from vertical circulation has also been minimised. Windows are hardly visible even from the curved stairway or elevator. A cross-section of the house reveals that the first floor with the guest room, which is the most public space, the second floor shared by family members, and the third floor of the most private spaces, which includes the bedrooms, is vertically stacked. This is, of course, the result of reflecting the client’s requirements, but also consides the area and scale of the house with sensitivity. However, it seems that it lacks vertical linkage between spaces so residents can visually communicate. A large ceiling to floor window on the south side is the only connector of rooms in the house whose floors function separately, but even the window is closed with a blind leaving few opportunities to visually communicate.

In her book Privacy and Publicity: Modern Architecture as Mass Media, Beatriz Colomina notes ‘The most characteristic quality of modern man lies in the remarkable antithesis between an interior which fails to correspond to any exterior and an exterior which fails to correspond to any Interior’. SOSU’s N House demonstrates both sides of modern house; the purpose of detached homes on large-scale public housing sites tends to reinforce the dichotomy of ‘an exterior that completely hides its interior and an interior that hardly reacts to its exterior environment’.

Some questions keep running through my head. What makes the interior space look a little awkward compared to the well-organised exterior? Is it due to a desire to gain public attention? What kind of role does a garden play in a house? In what ways must a detached house be different from an apartment? The attitude towards the interior boundary between public and private in a house is inevitably in line with questions of attitude and a way of life. It remains to be seen how the N House will function in a city, as one part of a complex mechanism that organises and expresses the lived experiences of its residents.

SOSU ARCHITECTS
Go Seokhong and Kim Mihee began their collaboration when they installed ‘Memory Box’, the winning project of the Gwangju Folly Ⅱ competition. They established SOSU ARCHITECTS in 2016 and carried out various works such as Dongshimwon, 3/1 Building, Shinsun-gil, and Yangpyeong Apricot Village. They are pursuing architecture of individuality and universality often finding form as small units within an urban fabric. Dongshimwon, their major work, won the grand prize in the emerging architecture practice track of the Korean Architecture Awards 2018, while Jipumpangpang Playground won the grand prize in the Heartwarming Space Award 2018.
Kim Changgyun
Kim Changgyun received bachelors and masters degrees in architectural engineering from the University of Seoul. He has participated in various architectural projects works as well as in architectural design, and has accumulated a wide range of practical experiences. He opened the office UTAA COMPANY Architects in 2009 and won the Korea Young Architect Award in 2011, the grand prize of 2019 Gyeongsangnamdo Architecture Award, and the first prize in the 2020 Korea Wood Design Awards. He is interested in urban regeneration based on small and medium-sized buildings purposed for everyday life and tries to express this through architecture.