​Exploring the Identity of the Arctic City 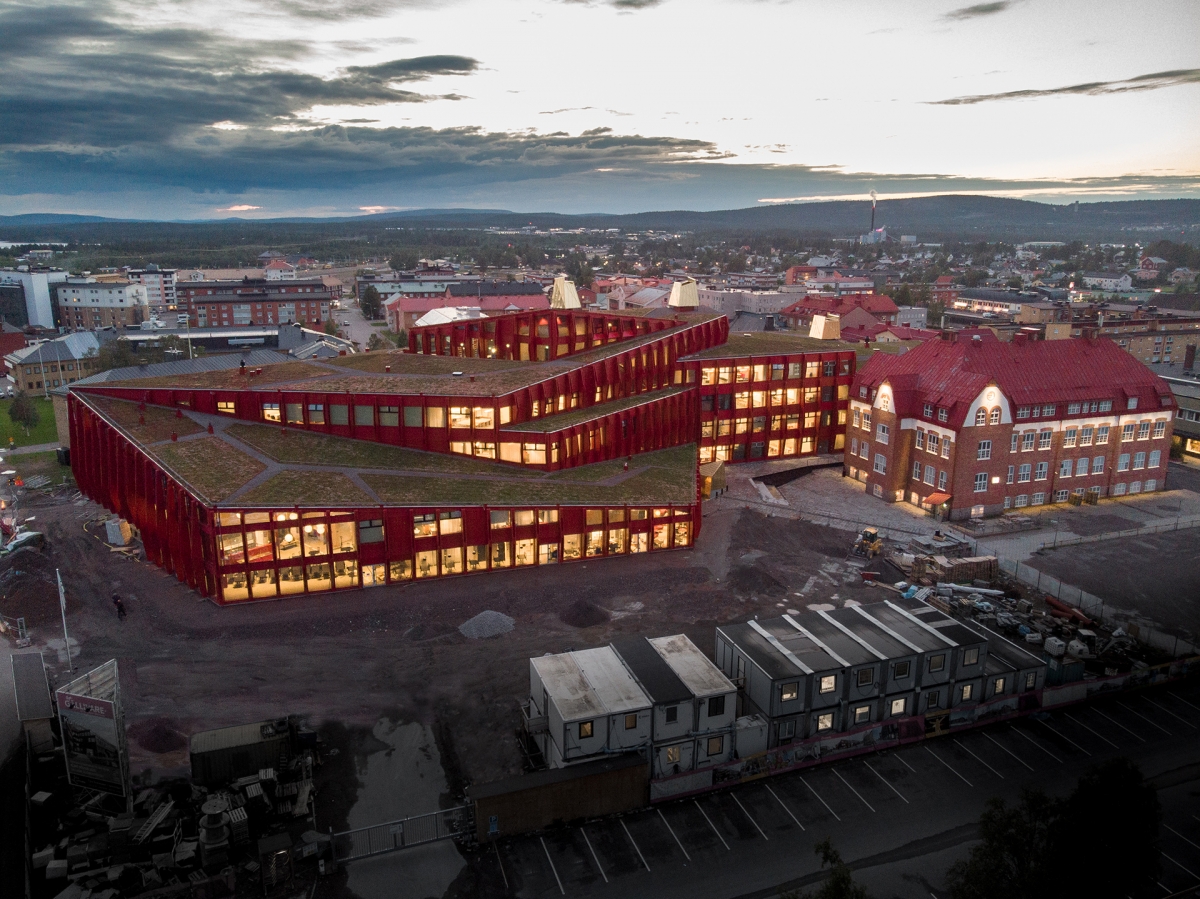 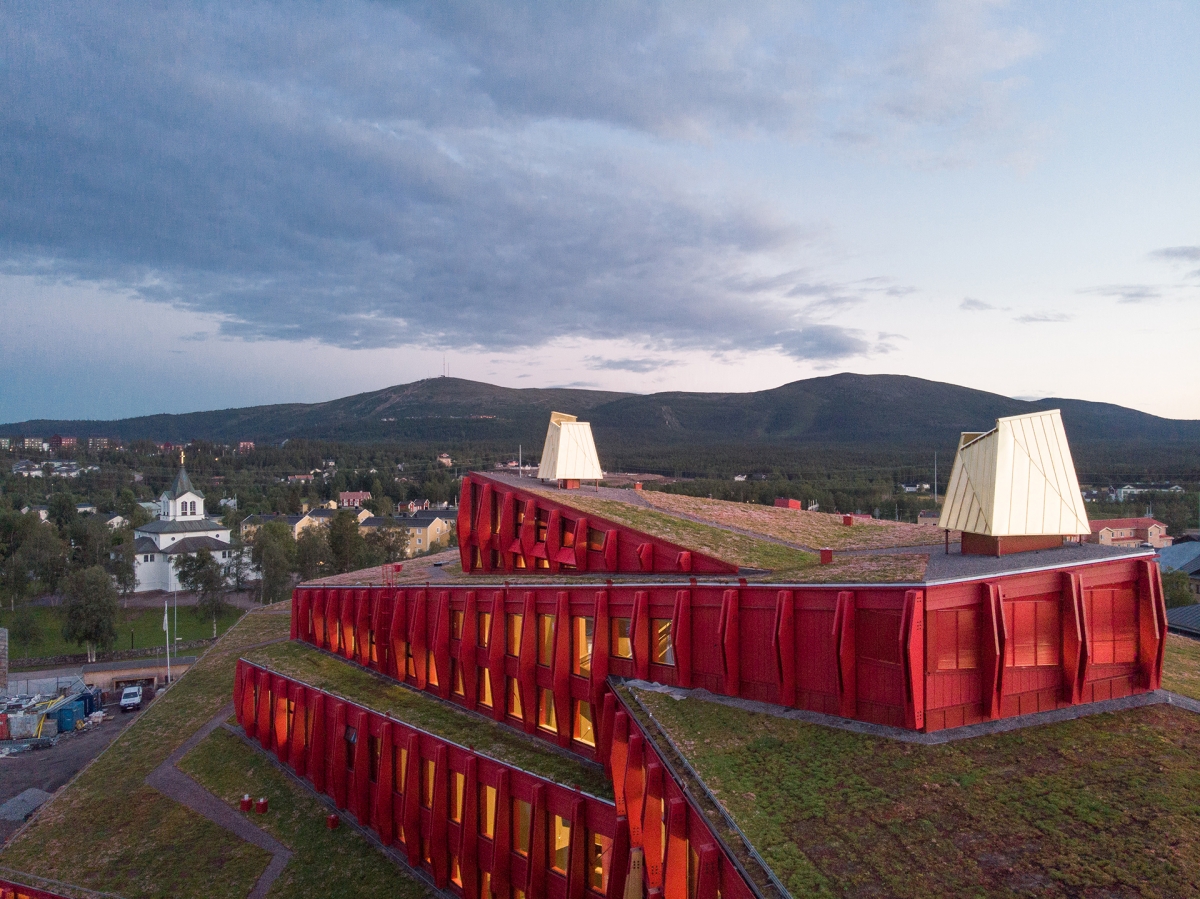 Bang Yukyung (Bang): The House of Knowledge (Kunskapshuset) is an educational centre built as the city of Malmberget was relocated to Gällivare as a consequence of mining development. Please tell us about the background to and procedures informing this project.

Lars Olausson (Olausson): It was decided that the iron ore held within the local mountains was of far greater economic value than the mining town of Malmberget. As a result, all of its residents and a lot of the old timber buildings housing them had to be moved to another site. The larger-scale facilities such as the high school, the swimming stadium and housing developments had to be replaced, as they were too substantial to simply relocate. Accordingly, the Gällivare Municipality devised a plan to phase two-thirds of Mamberguet out to Gällivare over a 20-year period. Housing and public buildings will now be replaced and built in Gällivare. We became involved in the project at its earliest stages in 2015. Beginning with the development of the new school’s layout, Liljewall Architects worked in collaboration with the council of Gällivare, the school staff and the project manager from MAF Architects.

Bang: The process of two cities joining as one accompanies radical changes in the urban environment. What expectations emerged when the location and programme of Kunskapshuset was decided upon?

Olausson: Gällivare’s ambition is to be an arctic city of a ‘world class’ standard. They want to dynamise this city by adding new buildings and attracting people. The strategy is to place new public buildings at the very centre of the town. The school is a great example of this planning aim as it is located alongside the city square, Vassara square. The students, which add up to around a thousand, along with the teaching body, will add a certain liveliness to this area during the day. We believe that the building, due to its location, will be a widely appreciated and positive addition to the cityscape, connecting local residents and contributing to the sense of a bustling city on the rise.

Bang: The building possesses an atypical appearance as it rises gradually in level according with the incline of of site. What kind of relationship between thebuilding and the surrounding urban context did you intend to cultivate here?

Olausson: The building is a quite big building, about 18,500㎥, and this had to be slotted into a relatively small plot shared with one of the most important buildings in Gällivare. The Gällivare museum is very nice brick building from 1910 with a red painted roof. It is tall in relation to its architectural context. Since we had to build close to the old building it meant adapting our height and elevation so as to be as respectful as possible. The volume also needed to be low and inviting on the side that faces Vassara square. Maintaining a sense of the balance so that Kunskapshuset can meet its surroundings on equal terms also meant a different approach to the façade that faces the church. The shopping street on another side has very low buildings, and we could continue to detail the particulars of this central zone. 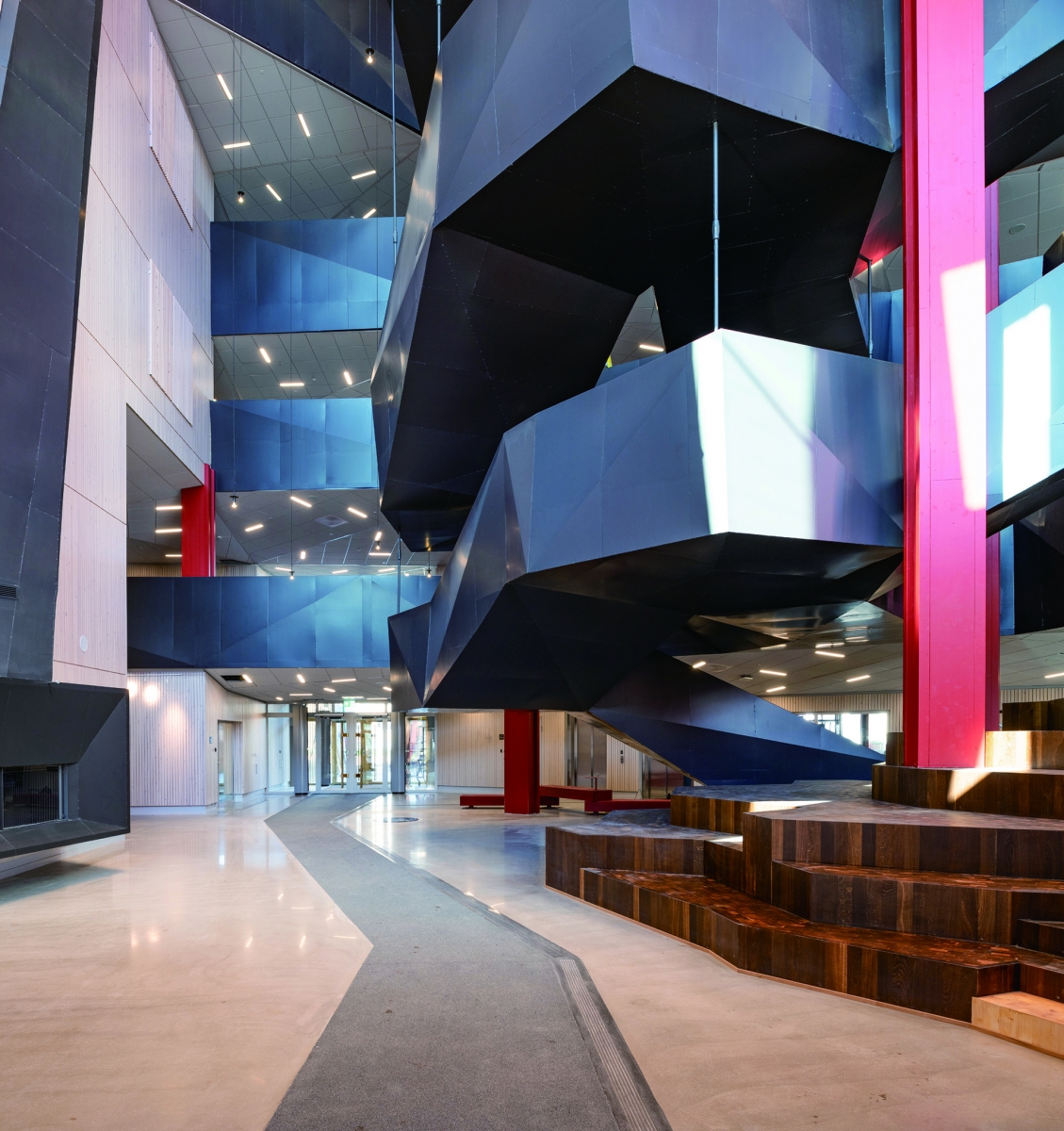 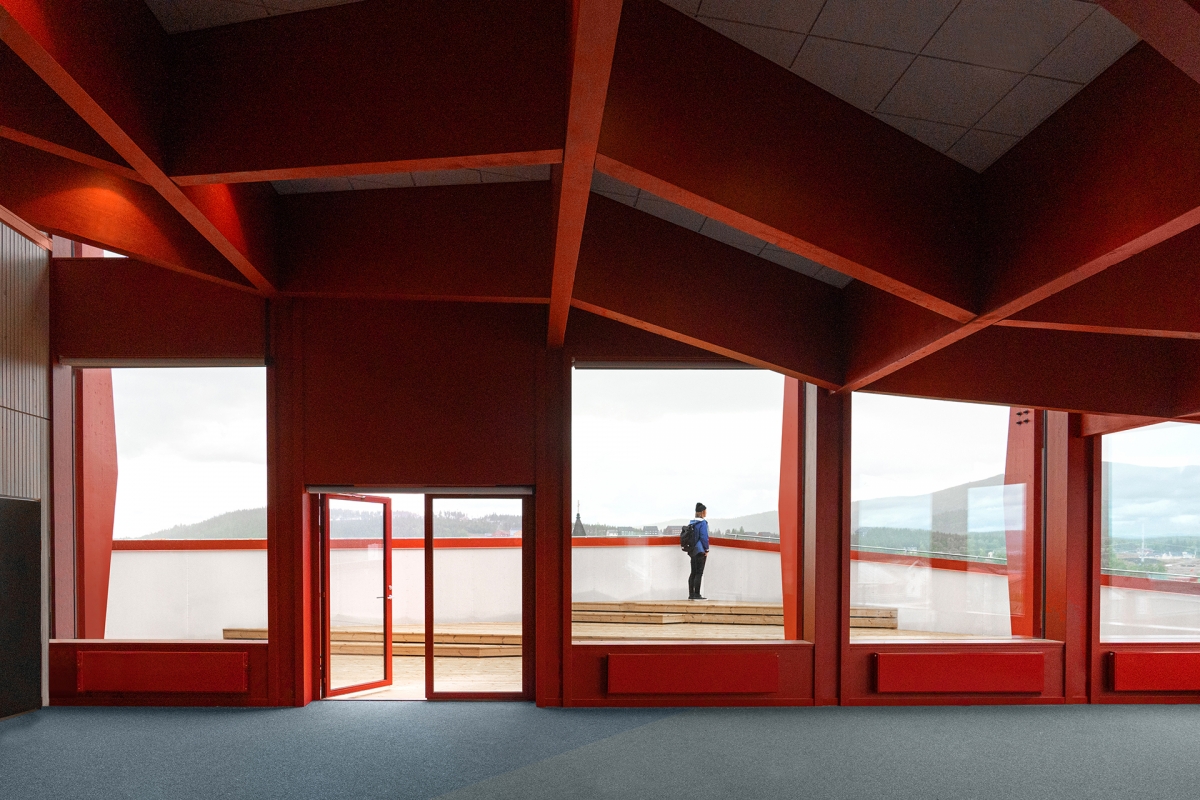 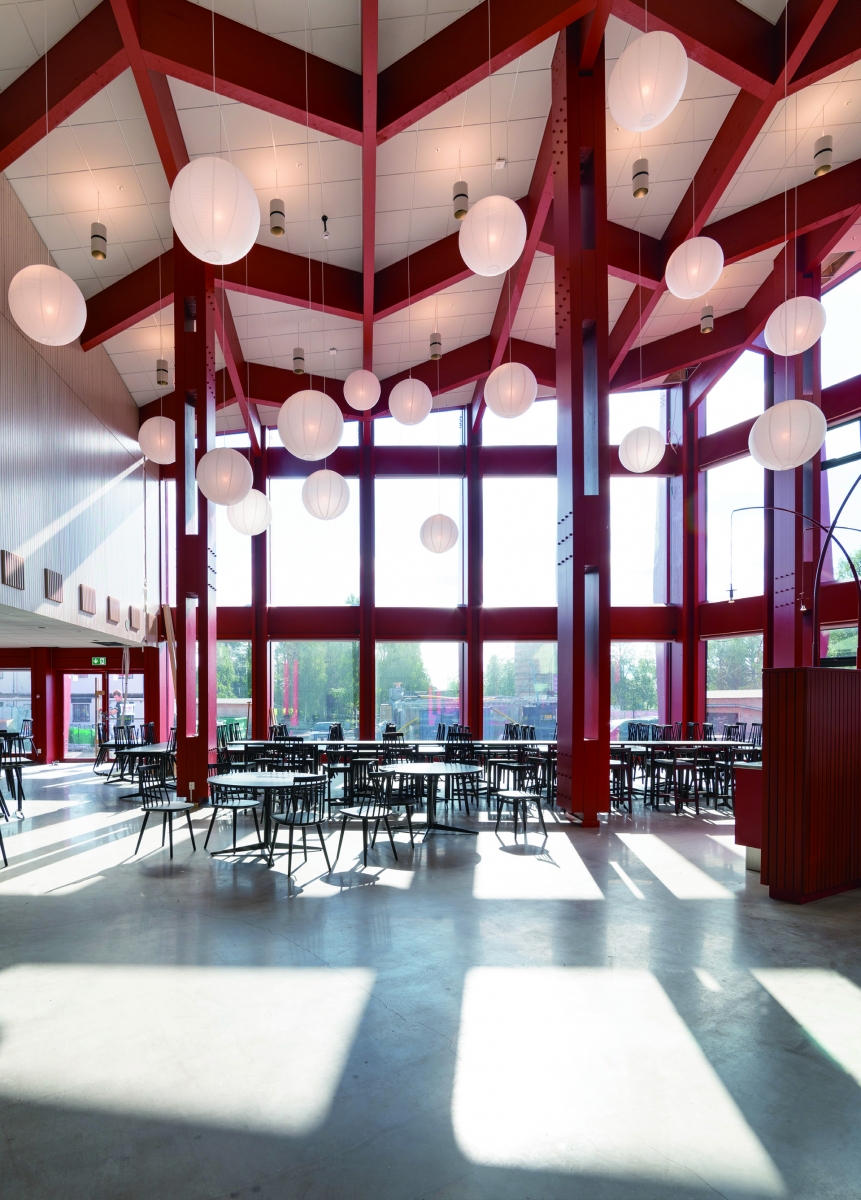 Bang: The red wooden column used in the façade is the main design feature. How did you come up with this form, along with its colour and material? What role does this column play in the building?

Olausson: Wood is both a traditional and modern but also simple material. The red colour is derived from the reddest elements found the natural landscape of the Arctic. Inspiration for the shapes came from the traditions of the Sápmi; the cultural heritage of Swedenʼs indigenous people has been central to the design. Decorative patterns found on traditional artefacts have been scaled up to become constituent parts of the building. The pillars, or columns, protrude from the facade to form a shield against the low arctic sun as well as repetition creating a rhythmic flow. As you walk along the façade, the pillars standing in pairs have been cut in different angles create a variation that pursues the different layers and levels.

Bang: I am curious to know more about the spatial composition in terms of distinguishing and connecting the circulation routes according to the respective functions of the building.

Olausson: Kunskapshuset is divided into two parts through the main stairwell, the open-pit, expressed as mining paths placed at the centre of the school. On the first and second floors, there are rooms for practical education, music, and art, together with the entrance hall, food court and café. The third and fourth floors accommodate the more theoretical aspects of study. As the volume of the building sets the size of the floor plan it slowly decreases in size as one reaches the higher floors. We explored ways of splitting the plans into smaller units with classrooms of three different sizes and smaller rooms connecting the informal rest areas for students. Other school programmes have their own corners of the building, but all the students meet in the main stairway.

Bang: You collaborated with three Sápmi artists (painter, glass artist, and textile artist) to engage with local traditions. What is unique about Sápmi culture, and in what ways does their work blend into your architecture?

Olausson: The Sápmi people are the only indigenous group in Sweden. There has been and continues to be significant disputes between the Sápmi people and the Swedish state concerning the use of land and the cultural ownership of the Sápmi. The artists we asked to join the project are politically minded and their art reveals their struggle to gain rights over their land and culture. In my view that makes the art strong and meaningful. This also mean that they accept us and our endeavour, and appreciate the aims of our project to draw inspiration from their culture. They decided to display two art works together as a team. The Cold Well is displayed in the entrance hall and is a glass work of painted ornaments. The other is a 40m-long concrete wall of three-dimensional cast hand drawings. The story depicted across the wall is of the Sápmi history and religious reflection. This concrete project will be finished in May 2021.

Bang: How did environmental factors unique to the polar region, such as the cold and the limited amount of sunlight, affect the project?

Olausson: There are the vast distances between homes and the open ranges of Gällivare. It’s for leaving just enough room for citizens to move around town avoid snow piles. The arctic environment has informed the design in many ways: there is a 2.5m-wide area left free for snow shoveling vehicles round the entrance floor on the outside. The glass of the façade in the cafeteria has a heated surface to prevent condensation and ice. On the roof, we introduced a special blend of sedum to endure the arctic environment and steel bars preventing the snow from covering the windows. The mechanical room has a special snow chamber so that the snow does not get into the fans. The exterior protection from the low-leveled sun is a part of the overall façade concept; the glulam pillars and façade panel have a longer life in the dry arctic atmosphere compared to in the south of Sweden. 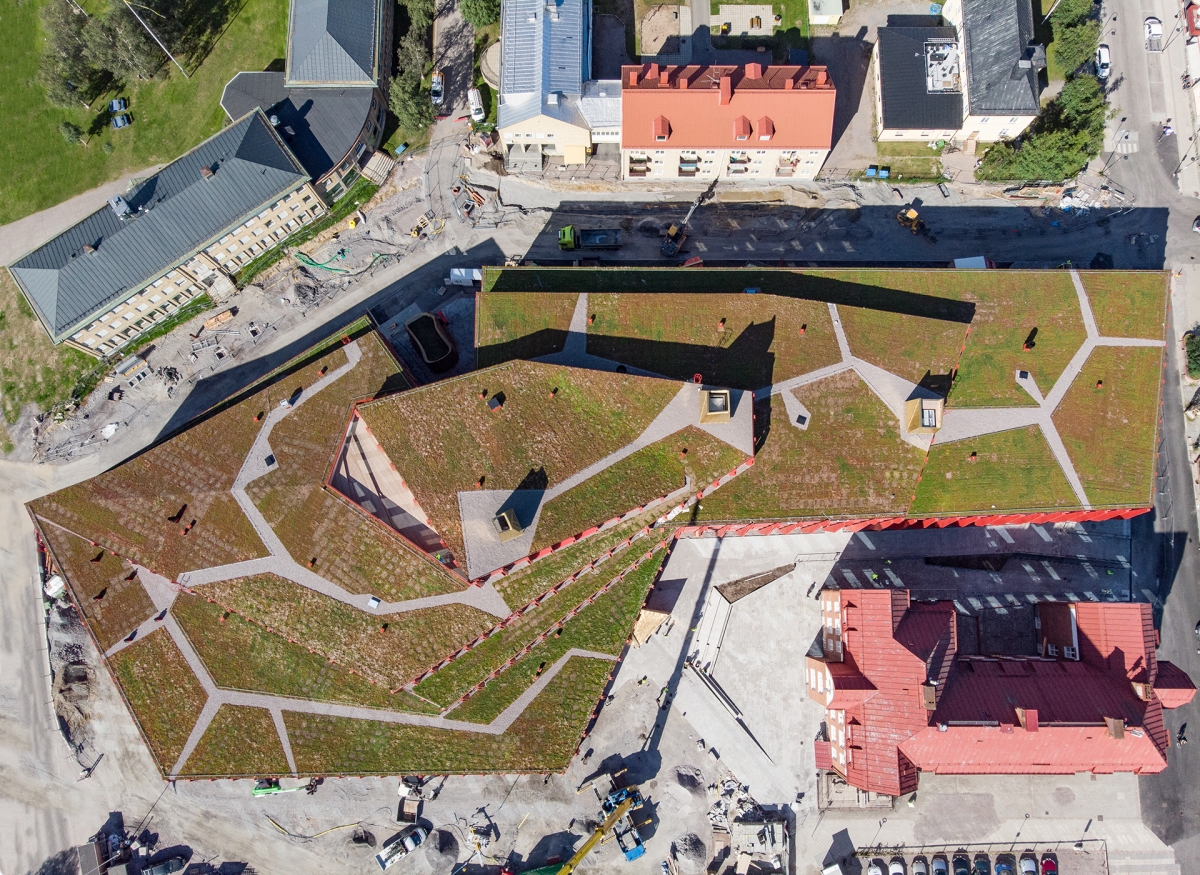