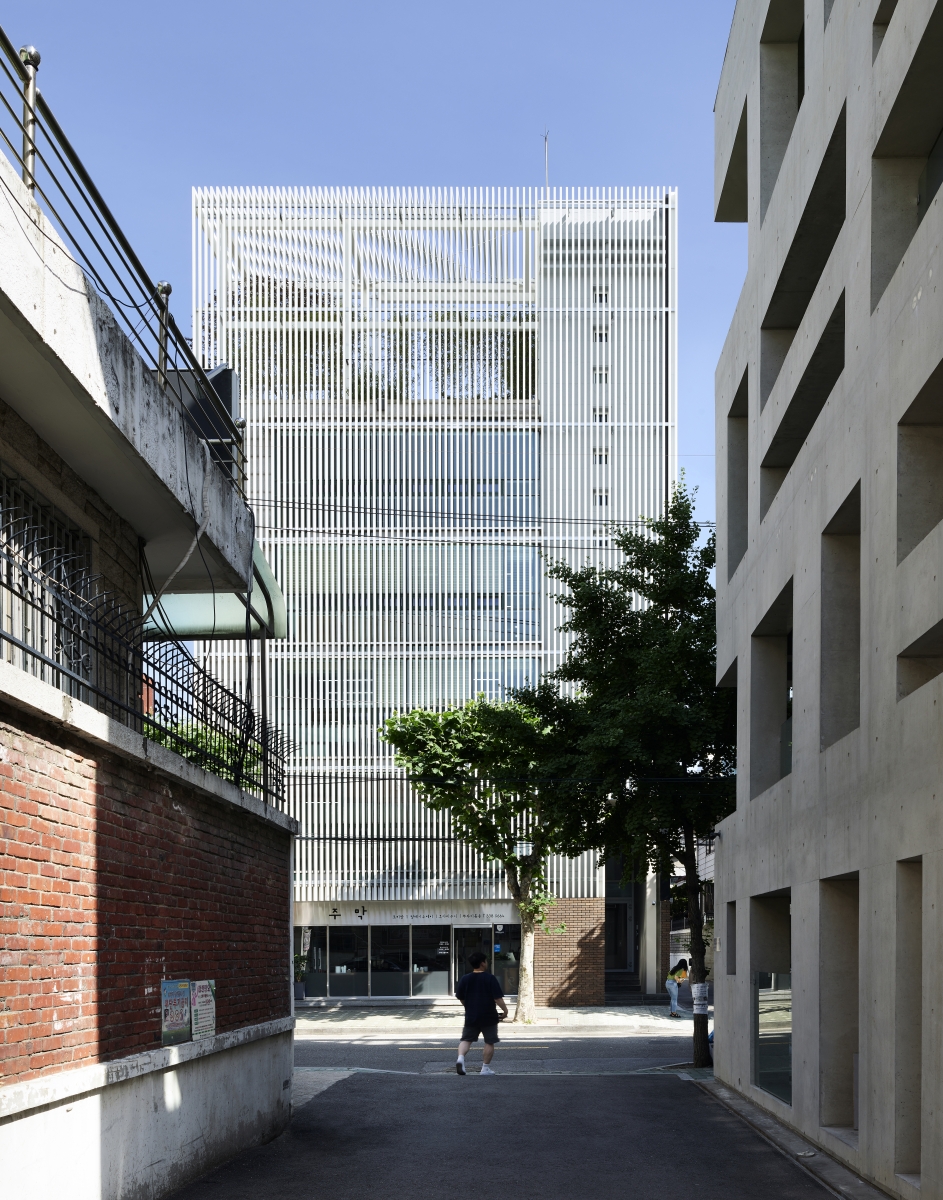 What makes remodeling difficult rests with the double standard often directing the course of decision-making in the design process. One good example is that while we demolished the existing staircase that climbed to the third floor so as to elevate the main entrance and install steel steps in a different dimension, the installation of the courtyard adjacent to the meeting room (by tearing down a part of the roof slab between the beams on the top floor) was never implemented. Although one side of the facade of the main body remains unaltered, the walls of the piloti-parking lot in the vicinity have been stuffed with clay bricks. Each element required more specific evaluation standards to construct a new building. Remodeling needs the double standard. Different to creating something out from scratch, the architect needs to maintain a collected mind.

The original intention was to completely renovate the existing exterior, to update the outmoded postmodern decoration of colored polycarbonate, punched metal, expanded metal, and the exterior of a unique fabrication unit. Although this was not done to a high standard, similar examples were explored with the client. Various exterior materials and design plans were also proposed. Like the smallest weapon given to a master, it was finally decided to solve this through the use of ‘lines’. When it comes to moulding, I felt like I was allowed to use the basic ‘line’ to an infinite degree. These lines functioned as louvers but also became threads for new clothes. Various ‘lines’ were used, such as aluminum square bars, thin panels with thick wires, C-type zinc studs, and thin flat iron bars. The outline of a new mass was formed through numerous repetitions of independent lines. Since the waterproofing was excluded in the exterior material added this time, the design was performed in a thorough separation and gaping method, contrary to the construction method of the existing exterior material. The masonry’s decorative joints were not constructed, the linear bar surface and the brick surface were slightly separated, and the new ceiling net of the parking lot was also hung to remain separate from the existing surfaces. No silicone was used, and no capping brick of the upper part of the exterior was required. These basic ‘lines’ that do not touch each other seem to be neatly extended. Remodeling is not a process of creating something from nothing, but a process of going to even nothing. (written by Lim Dokyun / edited by Bang Yukyung) 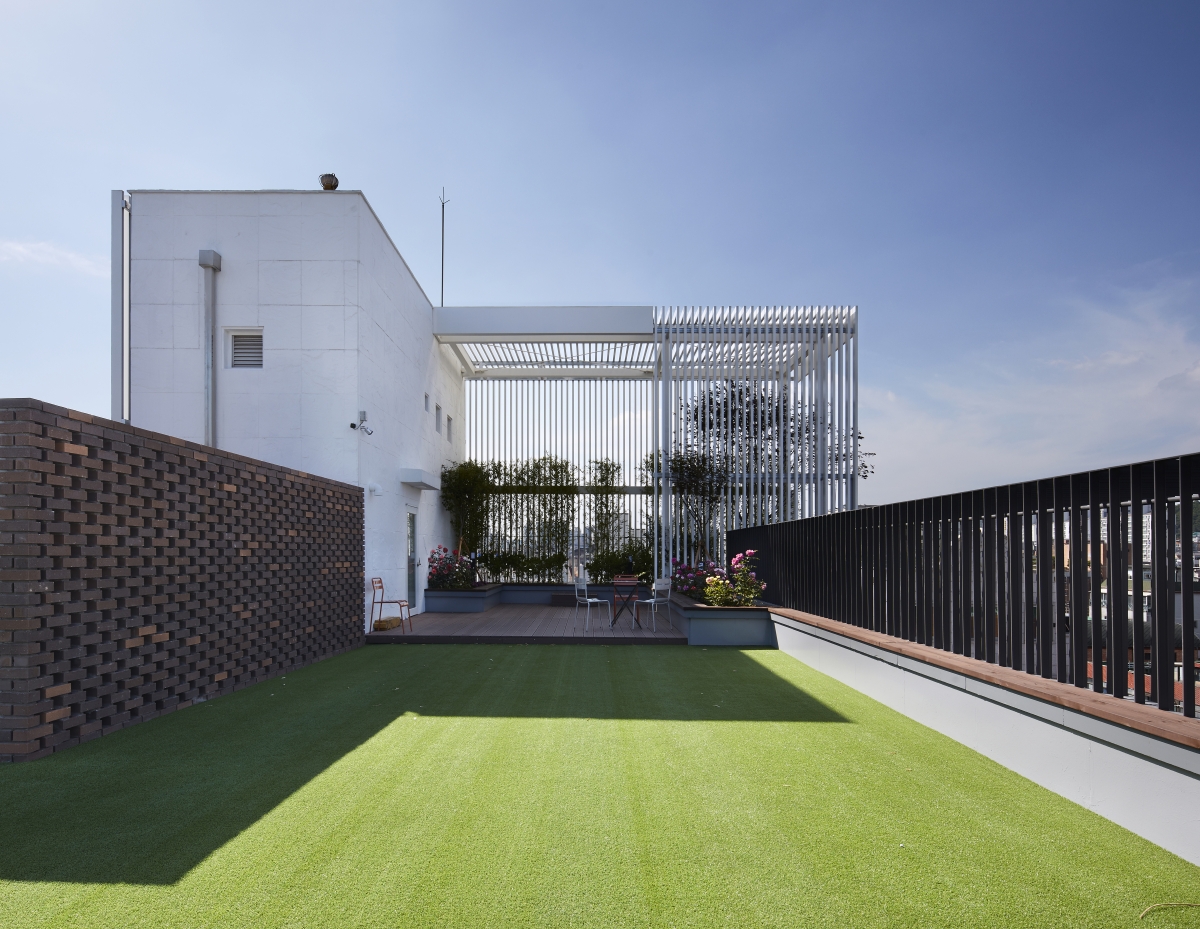 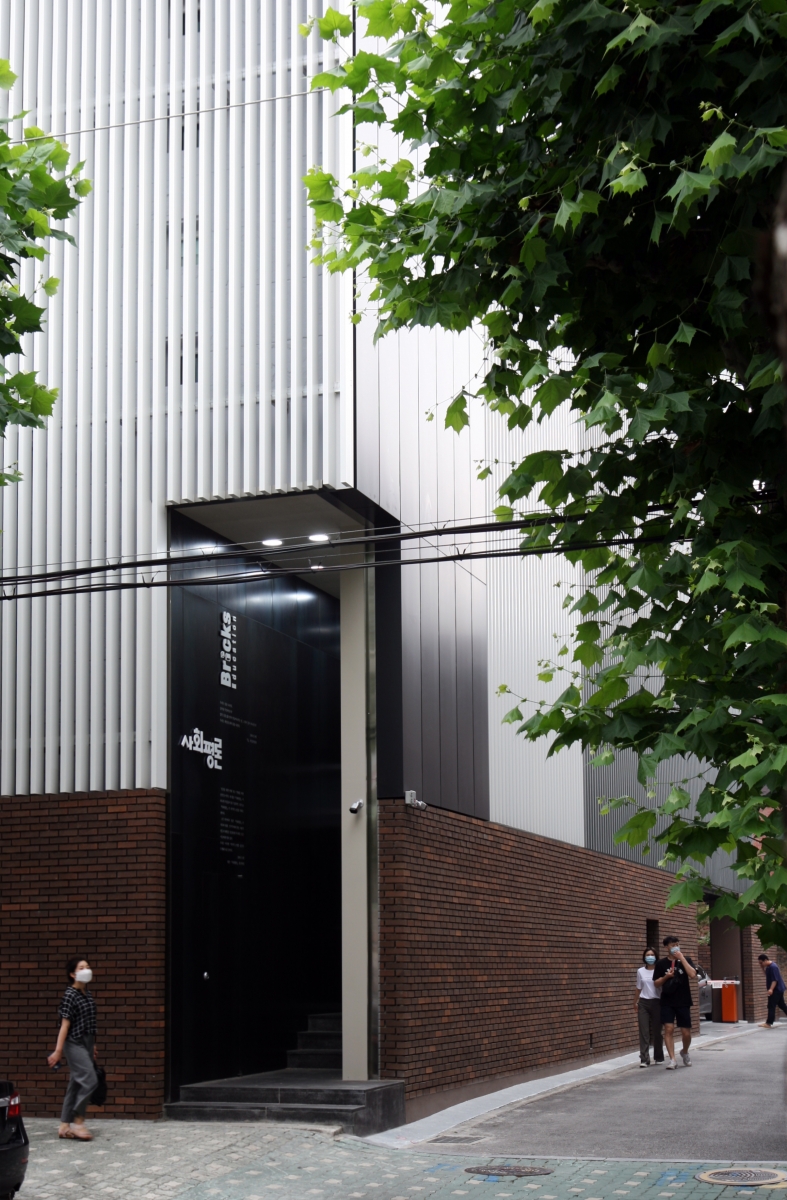 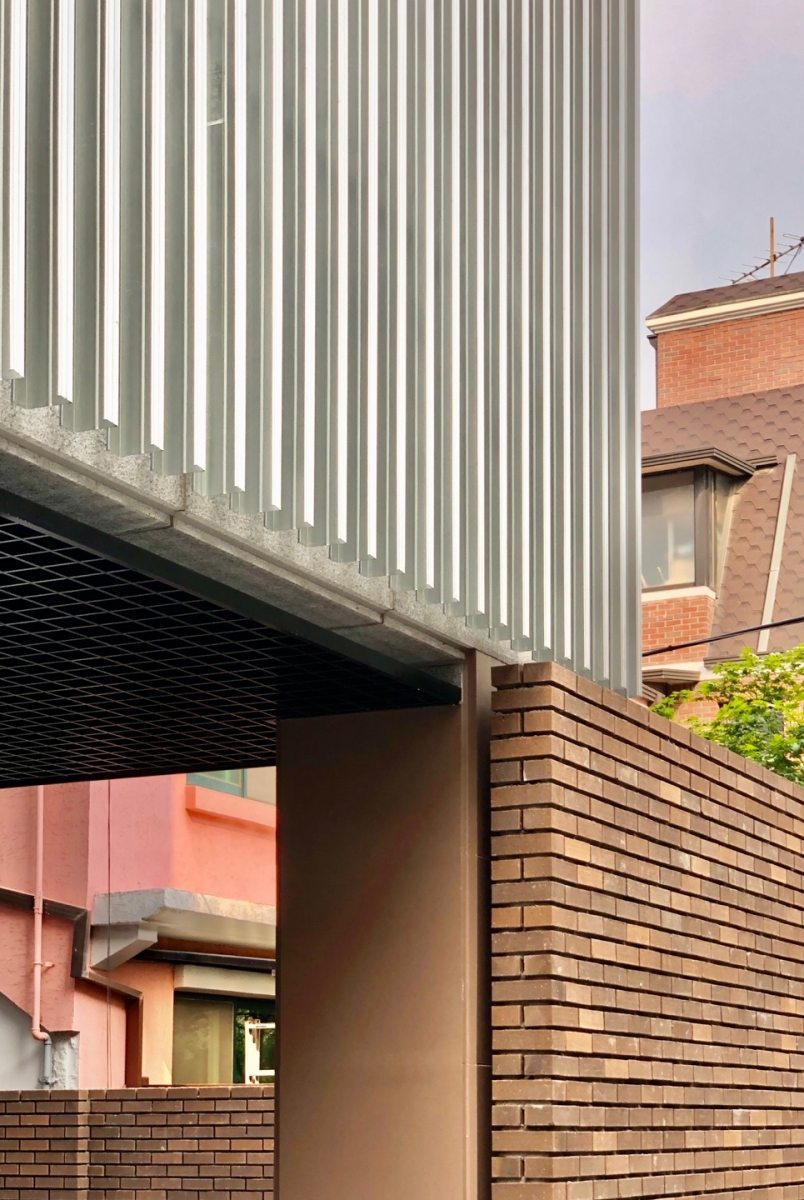 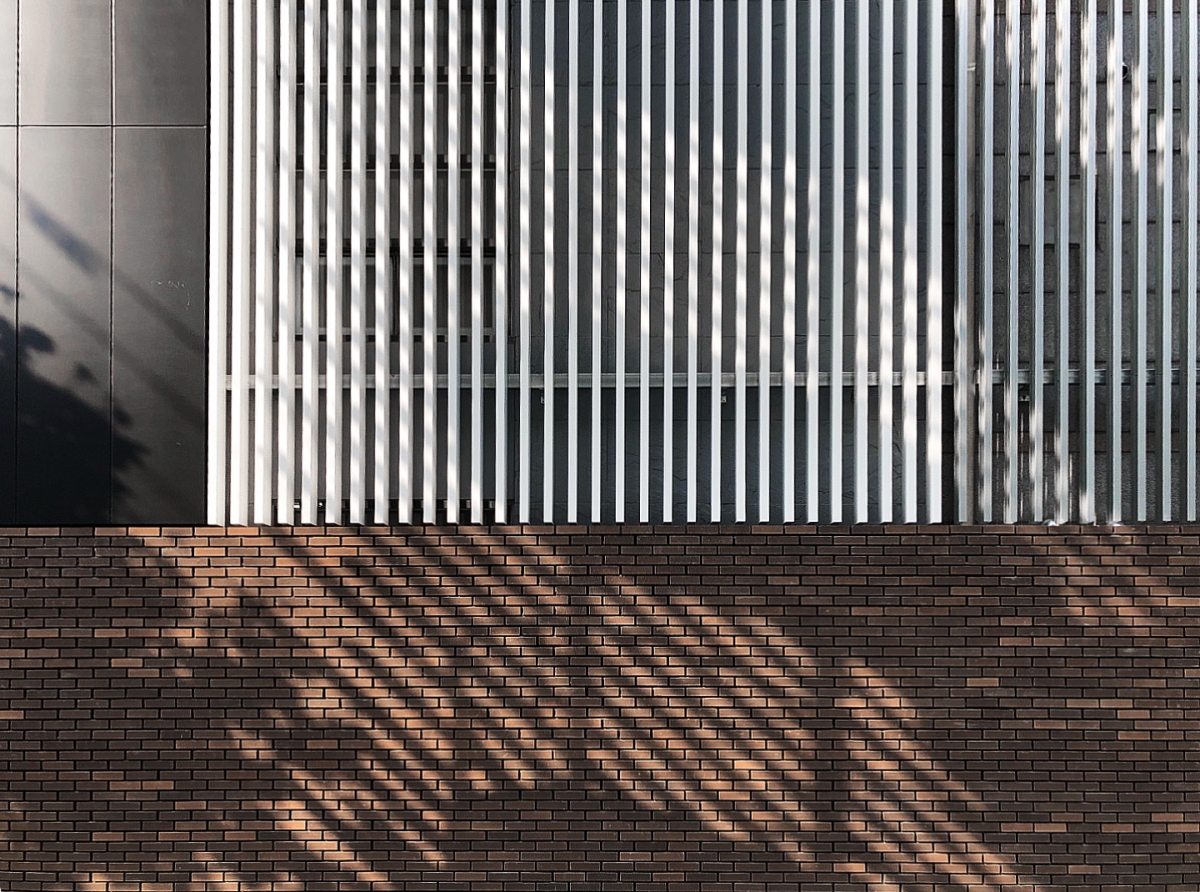 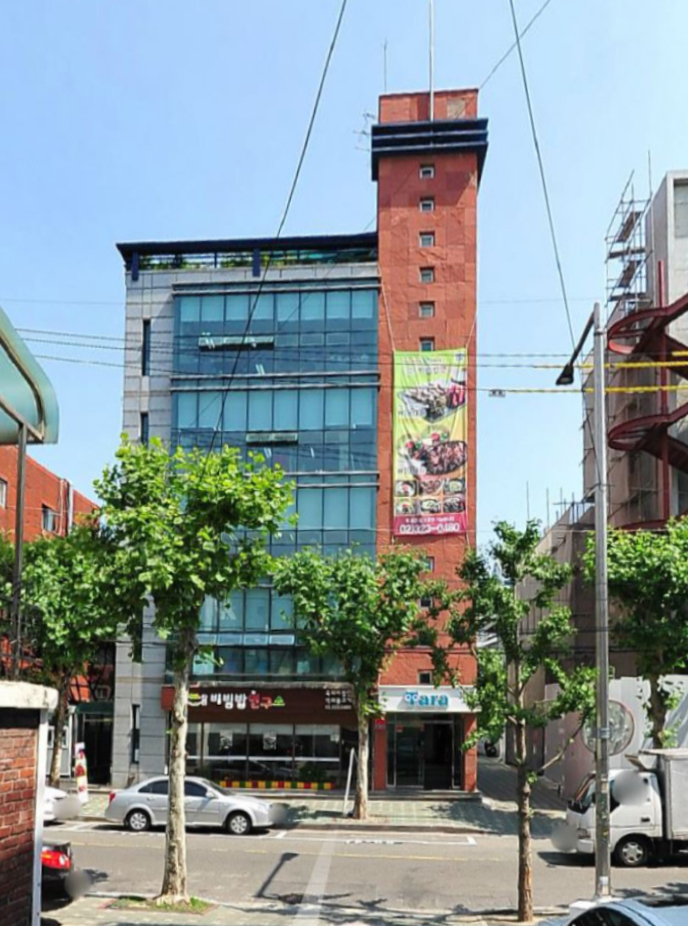 Facade of an existing building / Image courtesy of Luyoun Architects 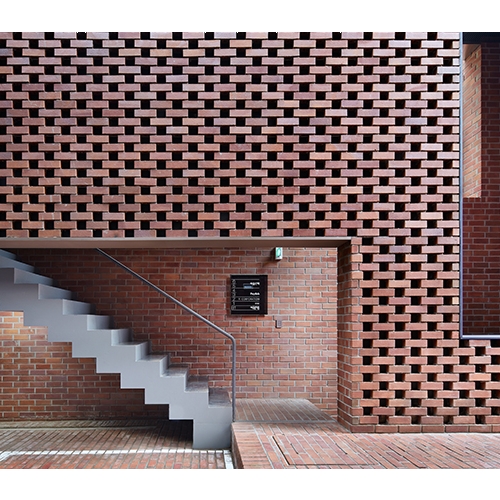