The Factory Fabricating a Forest

Jonathan Garnett (Garnett): The site is zoned for manufacturing and light industrial use with the goal of encouraging design and the production of goods in New York

City. Our client, Crye Precision, a designer and manufacturer of specialist protective equipment for military use, is a model tenant in the Navy Yard. Because of its history, and the particular history and architectural significance of Building 128 — the building in which Crye Precision located their headquarters — we have to follow stringent guidelines and requirements that honour the building’s history. Employing several hundred team members, hosts, and guests, we not only accommodate daily use requirements, but also important visitors and even events, within the necessary conditions of the site.

Bang: There are many renovation buildings in the Navy Yard. What kind of impact did you hope this building would have on the surrounding area?

Garnett: The existing building is a large-scale steel structure (153m in length and 26m in height) originally built in 1902 as a navy ship￾building factory. The old structure features a stunning vastness of space and a power of scale that is reminiscent of a different era in the history of New York City. It was our goal to ensure we did not mismanage this quality, which cannot be easily replaced or replicated. While it is often impulse to fill spaces and produce strong gestures as validation of one’s design prowess, this project required the

opposite, if it was to remain unique. Although the scale of the interior of our project is impressive, we like that this massiveness is not imposed on the surrounding area. The building’s exterior remains humble. By opening the front of our building to the public way — and by landscaping a living forest that would welcome both employees and the public — we hoped to share the impression of the monumental and the gentle with passersby and occupants alike.

Garnett: The existing steel structure gives the project its unique character. Decommissioned gantry cranes and a huge entry door remain in the space as indications of the building’s past. These historical remnants have been relocated and repurposed, when it was deemed practical for our purposes. The structure itself remains intact and has been coated in a matte black paint to combat corrosion. In terms of the design, we made the decision to learn from the formal and constructional qualities of the existing building. In making careful observations of how the existing building was assembled, we began to understand the logic behind how new juxtapositions might relate. Whereas welding may have sufficed in certain instances to connect steel elements, the bolted and fastened connections found in the original building informed the design syntax as we conceived of new details. While in some instances we copied existing details, such as railings and stairs, in other instances, such as in the glass conference room, we were more playful in our references. Specifically, the conference room is a steel assembly that owes a great debt to Modernism. We learned from the clear steel assemblies in Mies van der Rohe’s Crown Hall. The ability to hang the ceiling structure, rather than offer support by means of columns, meant that our glazing system could be perceived as more delicate, thus in qualitative contrast to the heft of the original steel structure. 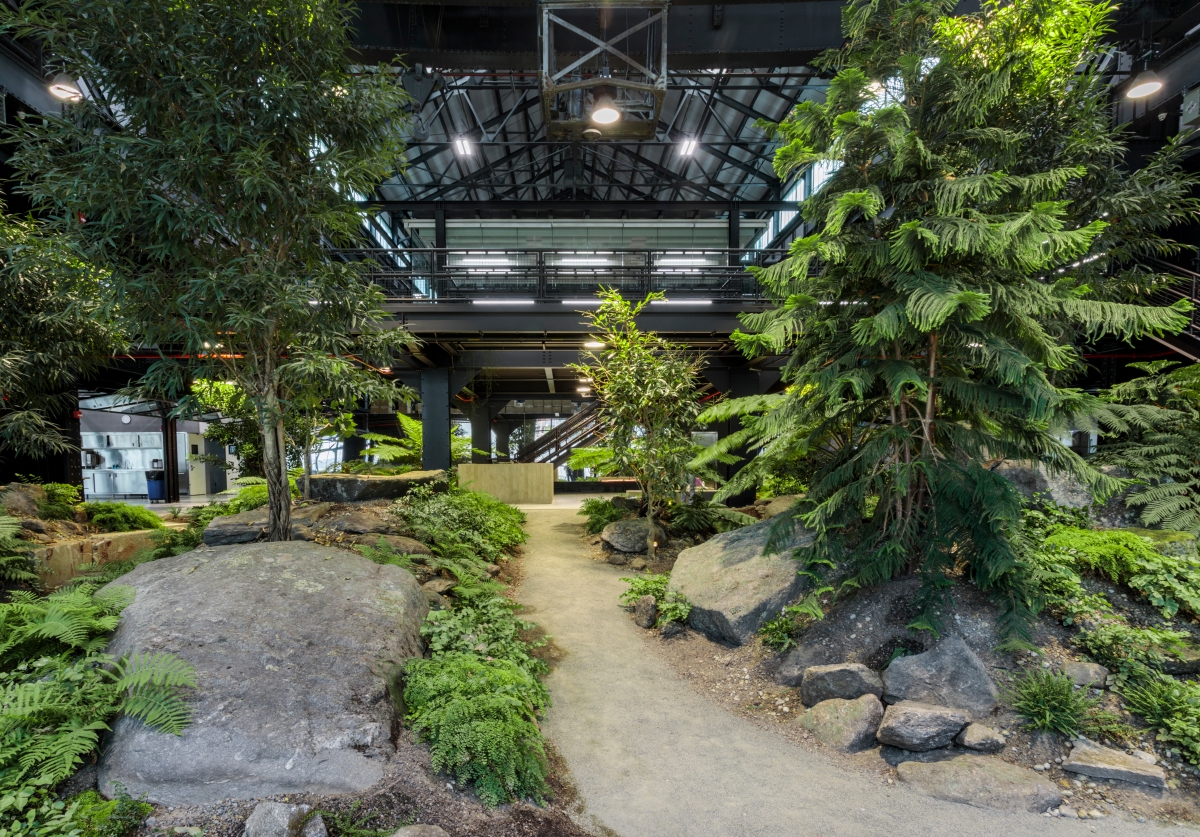 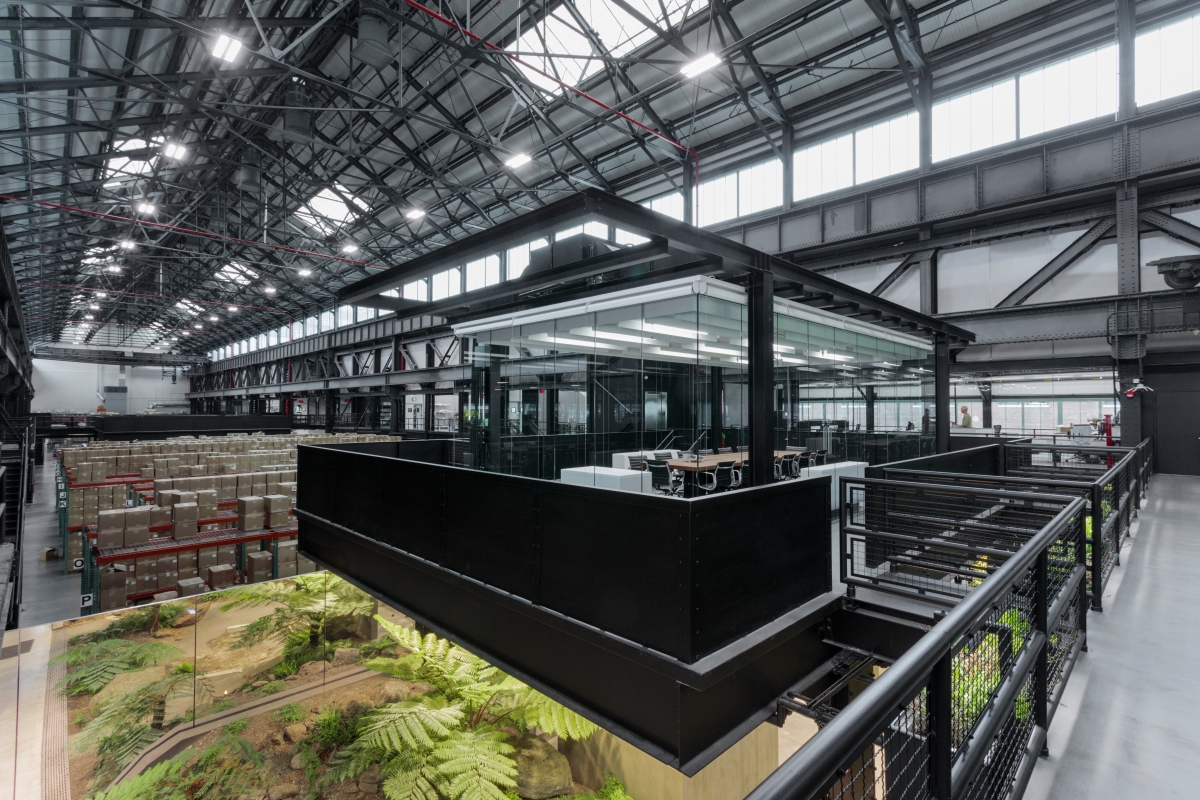 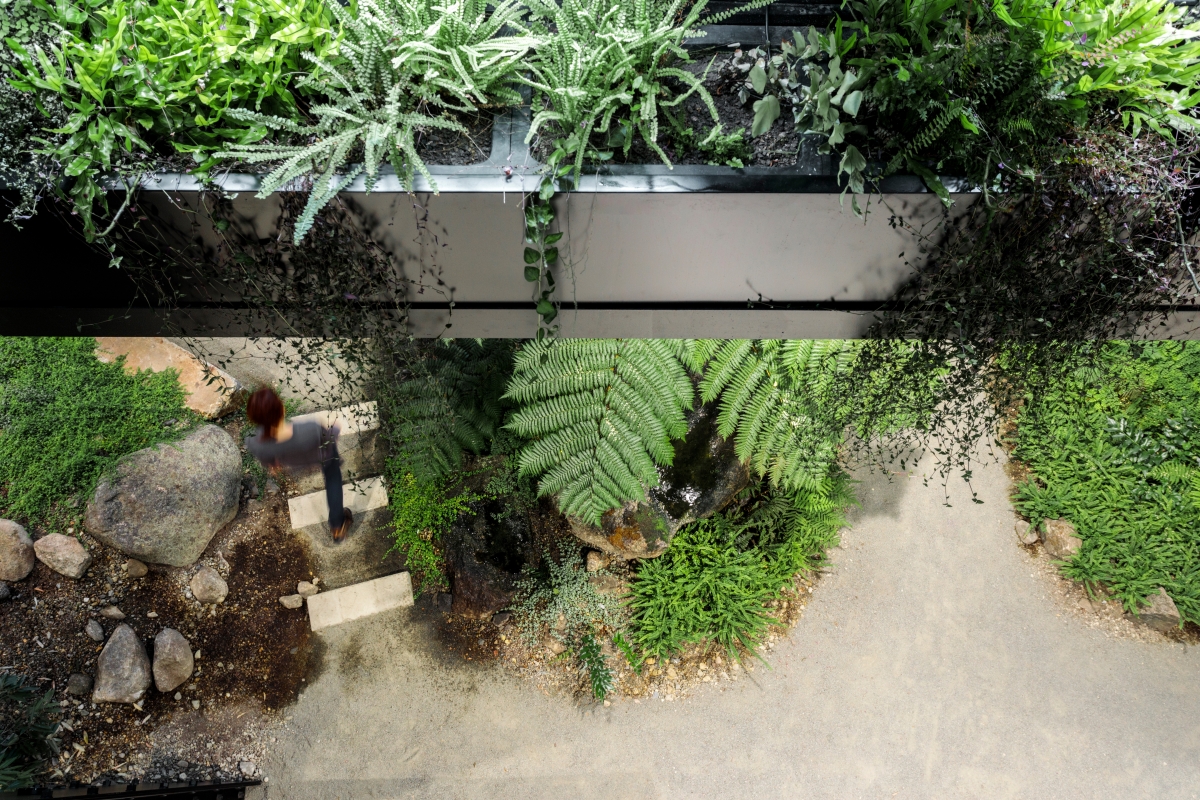 Bang: The building has united the company’s once-dispersed offices, research, and manufacturing facilities in one place.

Garnett: The client’s requirements were straightforward and highly pragmatic: we were able to accommodate design studios, prototyping and testing facilities, administrative offices, manufacturing areas, storage spaces, accommodations for shipping and receiving, employee, event, and meeting spaces. While all of the programmes are conventional, the scale at which they happen is unique. There is choreography between the parts of the project that form the identity of the company itself. Bringing clarity to this choreography was the focus of our design.The building is divided into a very simple organisational structure. The tall central space, known as the high bay, handles large scale material preparation, loading, shipping and receiving, and storage. Flanking the high bay are ground floor and mezzanine spaces, which more easily accommodate smaller scale programmes that require greater control of light, temperature, privacy, and comfort.

Bang: The landscaping at the entrance, on which you collaborated with Verdant, is very impressive. Here, curved artificial ground has been formed to create a forest in which plants can grow.

Garnett: We approached Verdant to collaborate on the design of this ‘Enclosed Forest’ because of their intuitive ability to create landscapes that seem both natural and relaxed. From our previous experiences, and our professional dialogue, we knew that their unique sensibility would lend the

project a quality that was not concerned with the formal qualities of the architecture at hand. As a result of the hyper-efficiency of this architectural project, we felt it necessary to offer a counterpoint to the design in order to relieve the project of its legibility as a manufacturing facility. The living forest may even be argued that the landscape rivaled the power of the building itself, not through its scale or might, but in its delicate and changing nature. The landscape serves as visual and experiential relief from both office and manufacturing tasks.

Bang: Why did you decide upon the concept of vegetation as a prehistoric forest? How has the environment, by which vegetation grows inside the factory building, been managed?

Garnett: The high bay, where the forest is located, is kept at a median temperature that is neither cold nor warm — there is no ‘freeze’ or ‘thaw’. Without these extremes, local flora could not survive. There were only a limited number of families of species that could survive in the temperatures our space maintains for operations. These families of species were cousins of prehistoric ferns and trees. We liked the fact that they suggested a different time in history, much older than the historic building itself. We installed a complex lighting system of powerful LED fixtures which provide the intensity and wavelength of light required for floral proliferation. Watering is integrated into the landscape, hidden between some of the 10,000 lbs (about 450kg) boulders installed throughout the undulating landscape. Conventional irrigation keeps the soil moist, while periodic showers of mist provide humidity to the leaves. 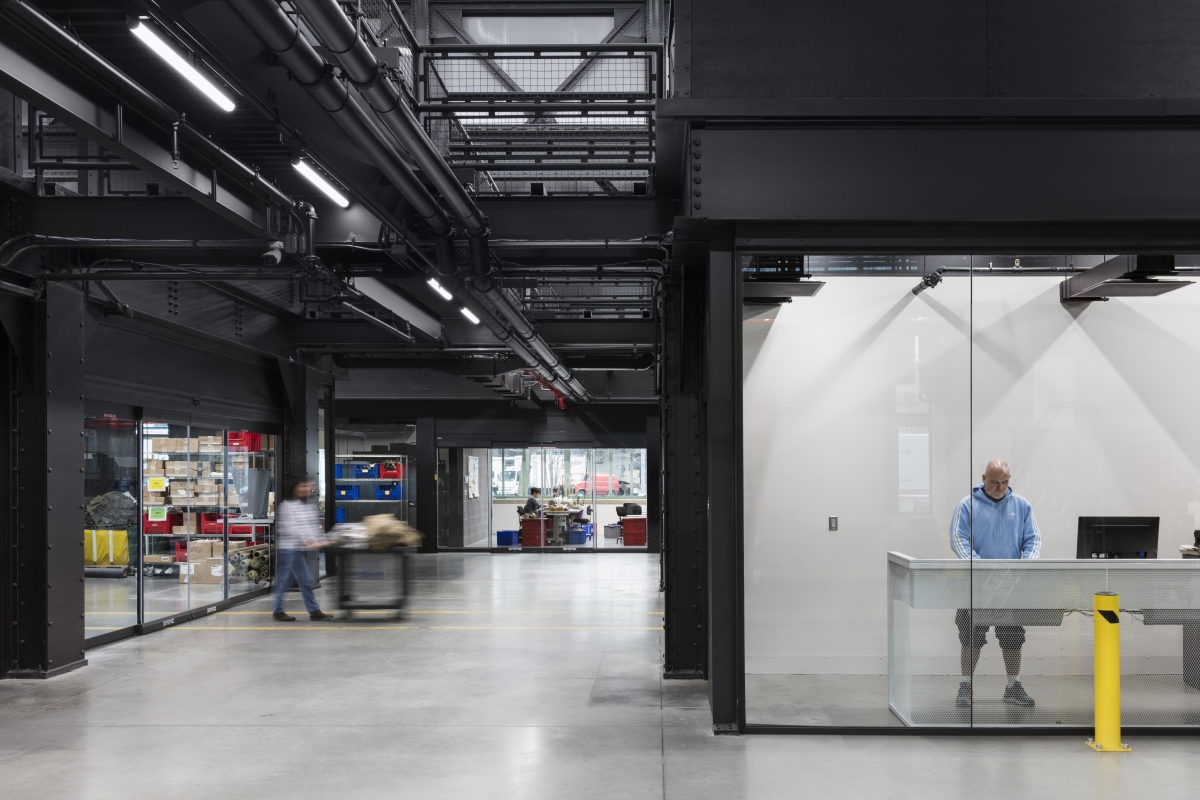 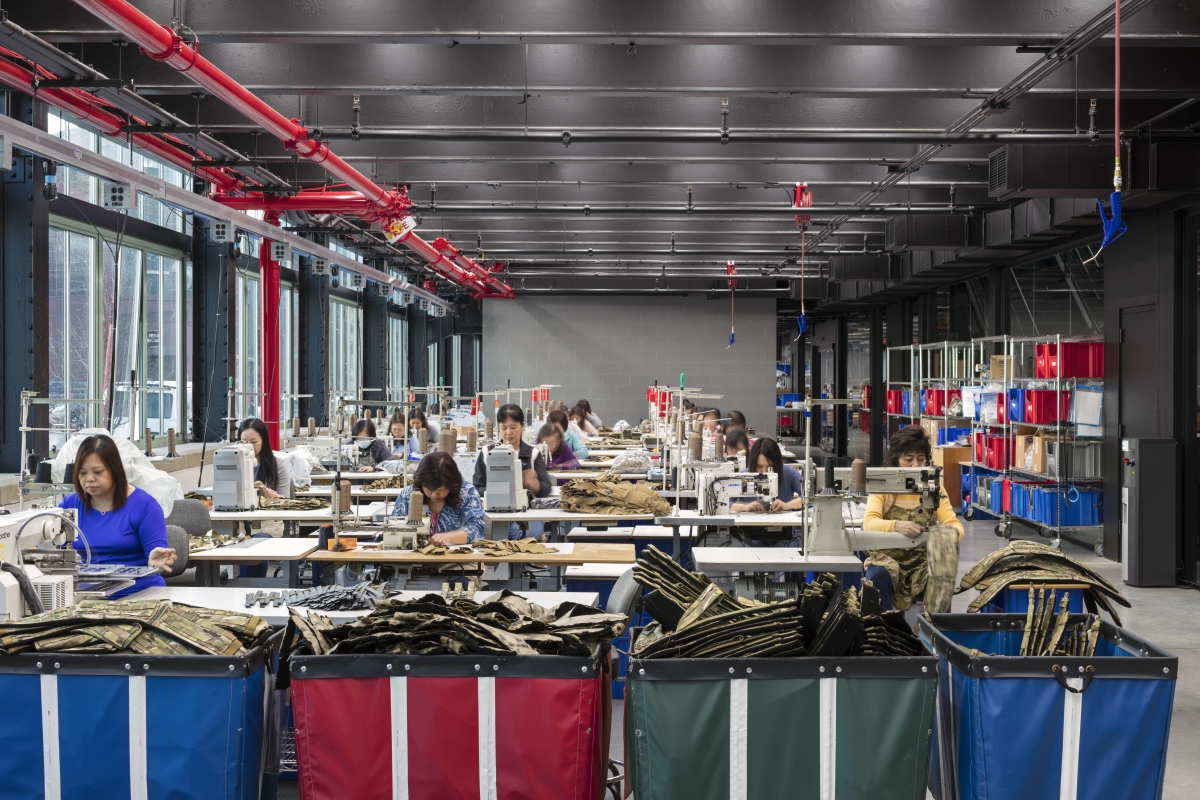 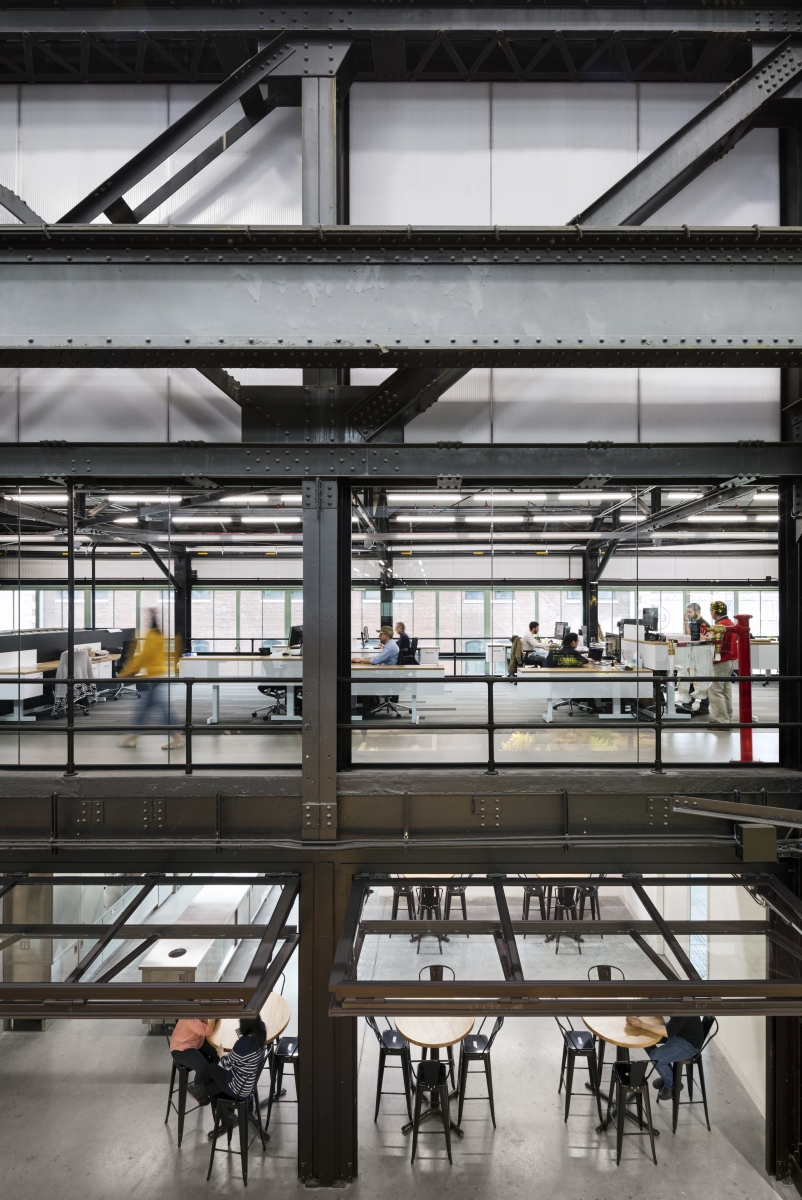 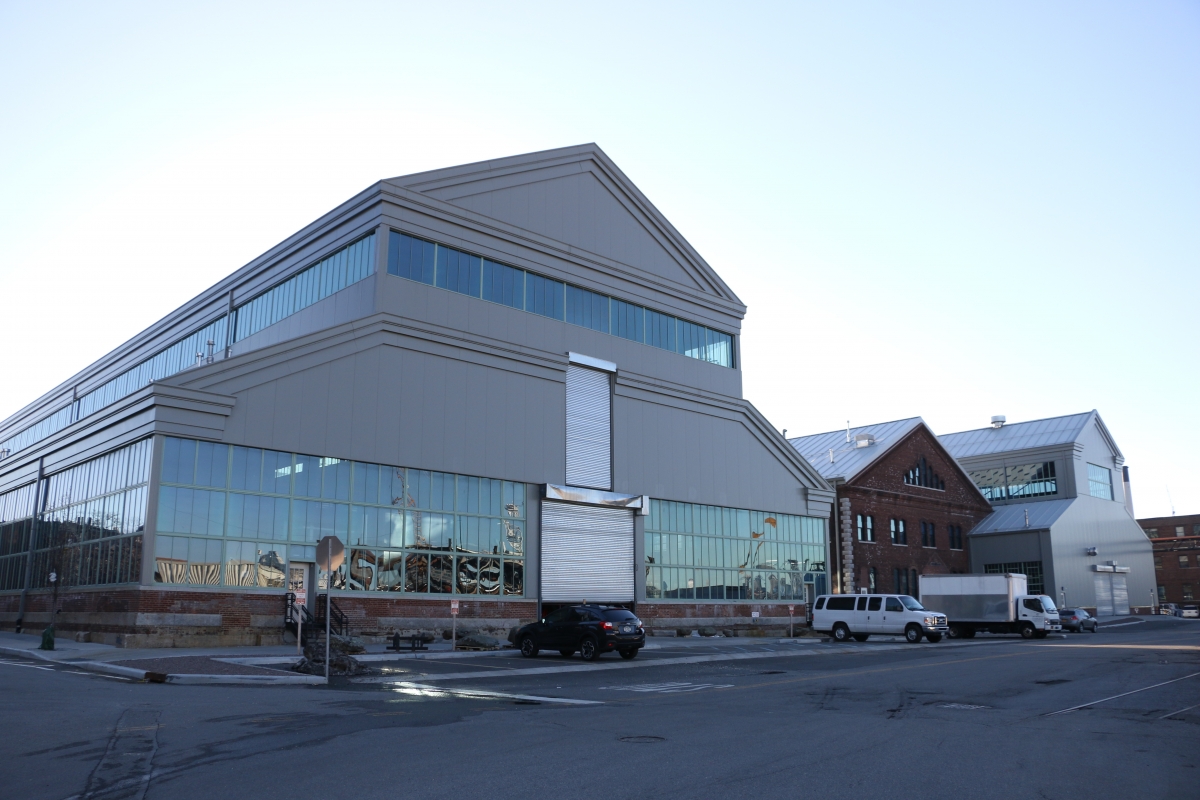 Jonathan Garnett
Jonathan Garnett earned his Bachelor of Arts in Industrial Design and Graphic Design from the University of Michigan and received his Master of Architecture from the Southern California Institute of Architecture. Along with participating in the MN Design Professional Corporation’s operations and development, he provides creative direction and oversight for the company’s projects. MN Design Professional Corporation is an architecture company with its headquarters in Manhattan, New York City. The company was founded by partners Jonathan Garnett (creative director), Steven Harper (operating director) and Preeti Sriratana (managing director) in 2015. Their representative projects include the US headquarters for HYPEBEAST, headquarters for Brooklyn Nets, Cote Korean Steakhouse in NYC and Miami, and Crown Shy, etc.