A Faç​ade That Captures The City’s Light And Landscape

Bang Yukyung (Bang): This is the third building in the Museum of Fine Arts, Houston (MFAH) complex, built as a part of the redevelopment project of the institution’s Susan and Fayez S. Sarofim Campus. Can you describe how you began the project?

Steven Holl (Holl): We were invited to participate in the design competition for the 2011 Redevelopment Project. Our two projects won awards at the competition: one was for the Glassell School of Art (completed in 2018) and the second was for the Nancy and Rich Kinder Building (completed in 2020, hereinafter Kinder Building). At the initial competition phase, we envisioned the expansions at the MFAH as part of an integrated campus. A key element in our master plan was the concept of moving all parking below ground, freeing up space on the campus not only for the new buildings but also for outdoor gathering spaces that would allow the campus to become more pedestrian friendly as a whole.

Bang: It is located adjacent to major architectural landmarks such as the Caroline Wiess Law Building renovated by Mies van der Rohe in 1958 and 1974, Rafael Moneo’s Audrey Jones Beck Building in 2000, and a Cullen Sculpture Garden designed by sculptor Isamu Noguchi in the 1986. What kind of influence did this layout have on the design? The Glassell School of Art is also on the same site. How do they relate to each other?

Holl: Across the campus, all of the buildings are in conversation with each other, and the lush natural spaces throughout the Houston landscape serve as the connecting syntax. The L-shaped Glassell School of Art building, which we completed in 2018, was a key feature in our overall space-shaping strategy. The Kinder Building was designed to be complementary while also contrasting with the other structures on the Museum campus. Within the horizontal collection of stone (1924), steel and glass (1958, 1974), and stone (2000) buildings, the Kinder Building adds a horizontal aspect to the architectural context in translucent glass. The curved glass elements have a soft texture, alabaster-like; the Kinder Building appears opaque by day and translucent at night, presenting a glowing presence at night. 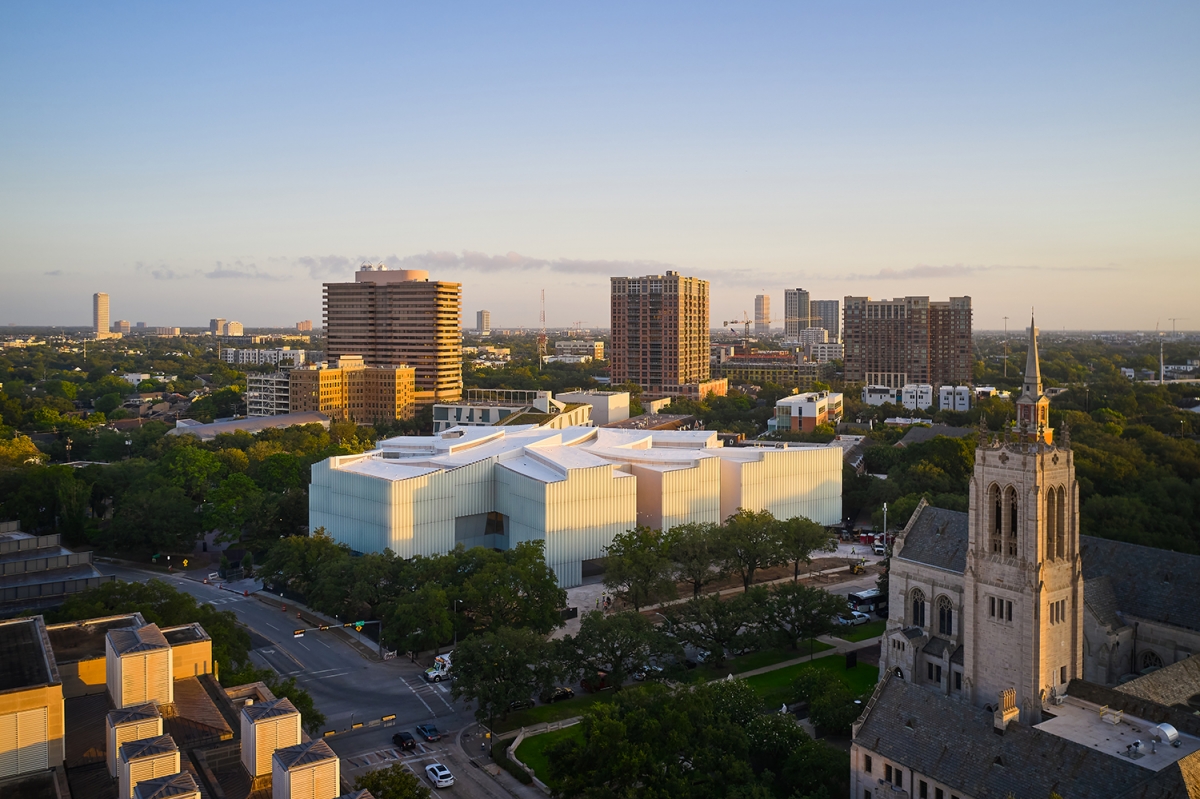 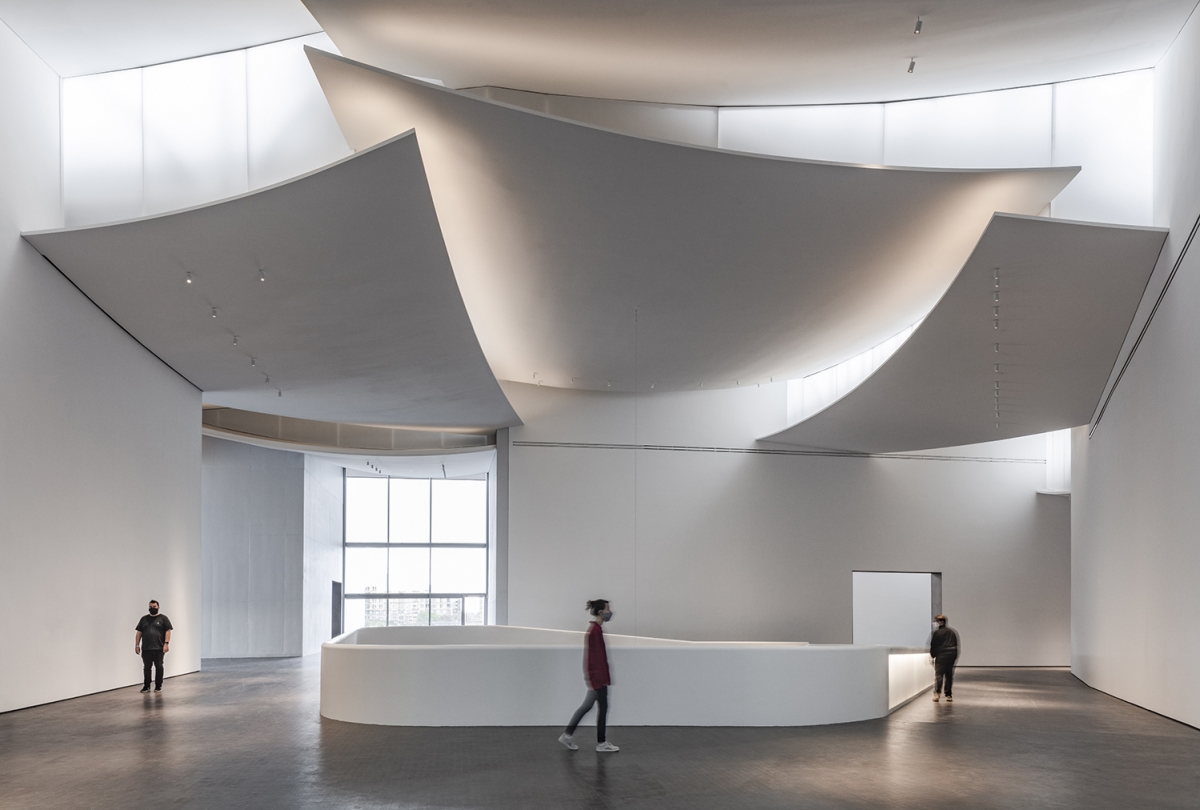 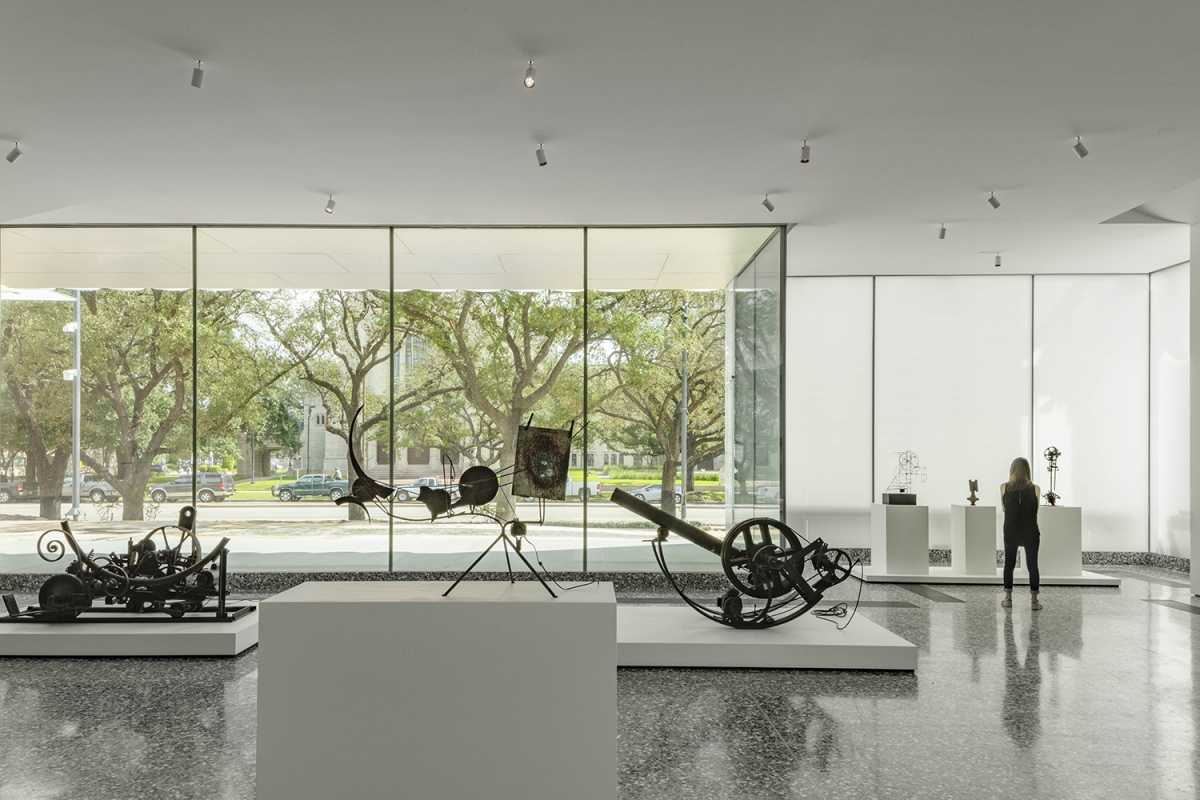 Bang: I am curious about the way the entrance and viewing deck flows and how the programmes were arranged in connection with the campus. What roles do the seven gardens scattered throughout the Kinder building play in terms of their aesthetic character and function?

Holl: The interior of the building centres around a full height forum, and a circulatory path. Through the galleries, we developed continuous circulation for visitors. The circulation feels intuitive; regardless of how you enter the building, you are drawn into the central atrium, where a monumental curving stairway wraps around and up the triple-height space, the museum’s centre of gravity. To realise campus unity along a horizontal plane, all parking will be below ground. Visitors arriving by car begin their museum experience in the lower arrival hall and sculpture court, connected to the new lobby. Those who start their visit in other museum buildings, enter through two new subterranean tunnels, with light installations by Olafur Eliasson, James Turrell and Carlos Cruz-Diez. The gardens instill a porosity throughout the building, connecting the interior and exterior, the old buildings and the new buildings horizontally. Punctuated by seven gardens, the new gallery building with its transparent ground level has spectacular views into Noguchi’s sculpture garden.

Bang: In the design description, you mentioned that ‘it was designed under the influence of the “big Texan sky” and the billowing clouds’. How was this implemented throughout the building, in terms of form, space, and material?

Holl: Concave curves, imagined from cloud circles, push down on the roof’s geometry, allowing natural light to slip in of a precise measure and quality—optimised for galleries. The undersides of the curved ceiling have been turned into light reflectors, catching and directing the light across each unique gallery zone. These curved slices of light shape the gallery spaces organically in a unique way, informed by the the lush vegetation and water features that characterise the new campus. Rather than a mechanical and repetitive space, the light is organic and flows to echo the movement of the galleries.

Bang: I would like to know about the design strategy behind your treatment of light in accordance with the museum space. Also, how was the luminous canopy manufactured, and how is it supported?

Holl: We collaborated with international expert teams to realise our concept. The third￾floor galleries are naturally lit—with 16-20% natural light falling across the walls in the art zone. We worked with Transsolar on the daylit calibrations, and with L’Observatoire International on all of the electric lighting and the integration of electric and natural light. The structural engineer Guy Nordenson & Associates devised a system of curved, custom I-beams, milled from lightweight steel, to create a paneled roof system able to admit and diffuse just enough light throughout the space for the safe display of art. 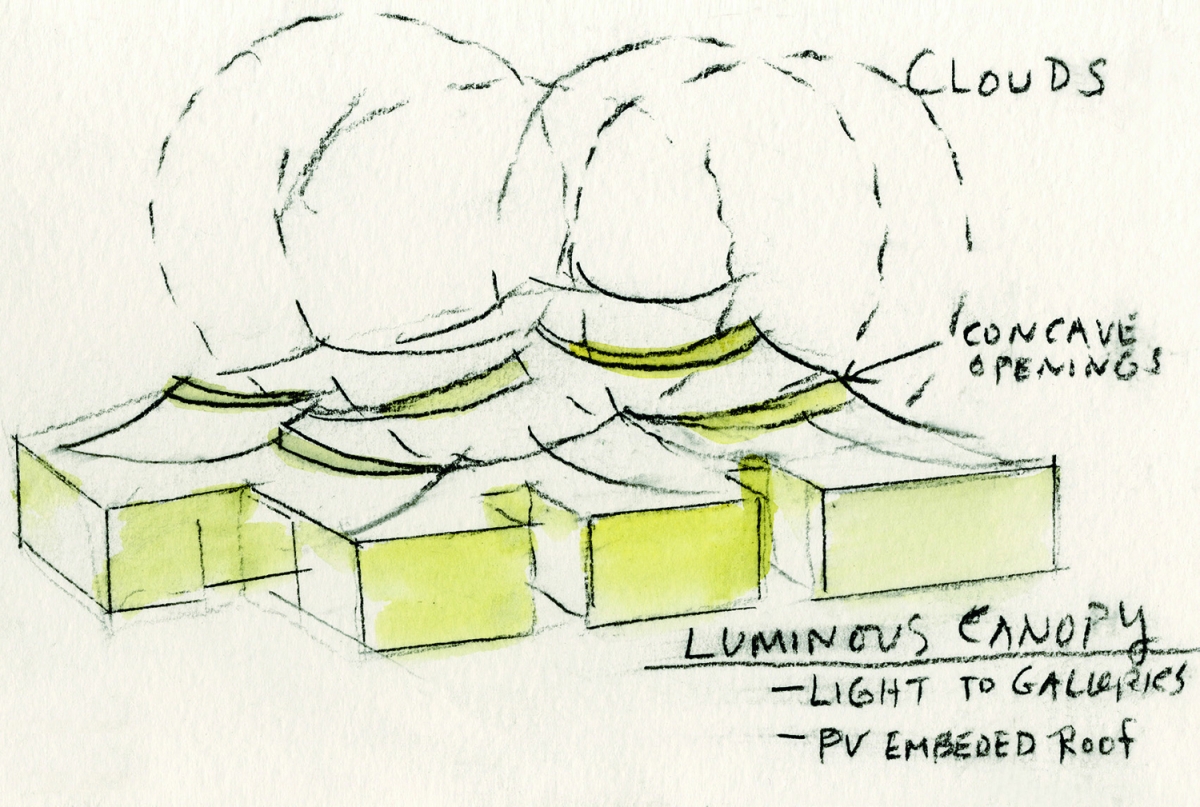 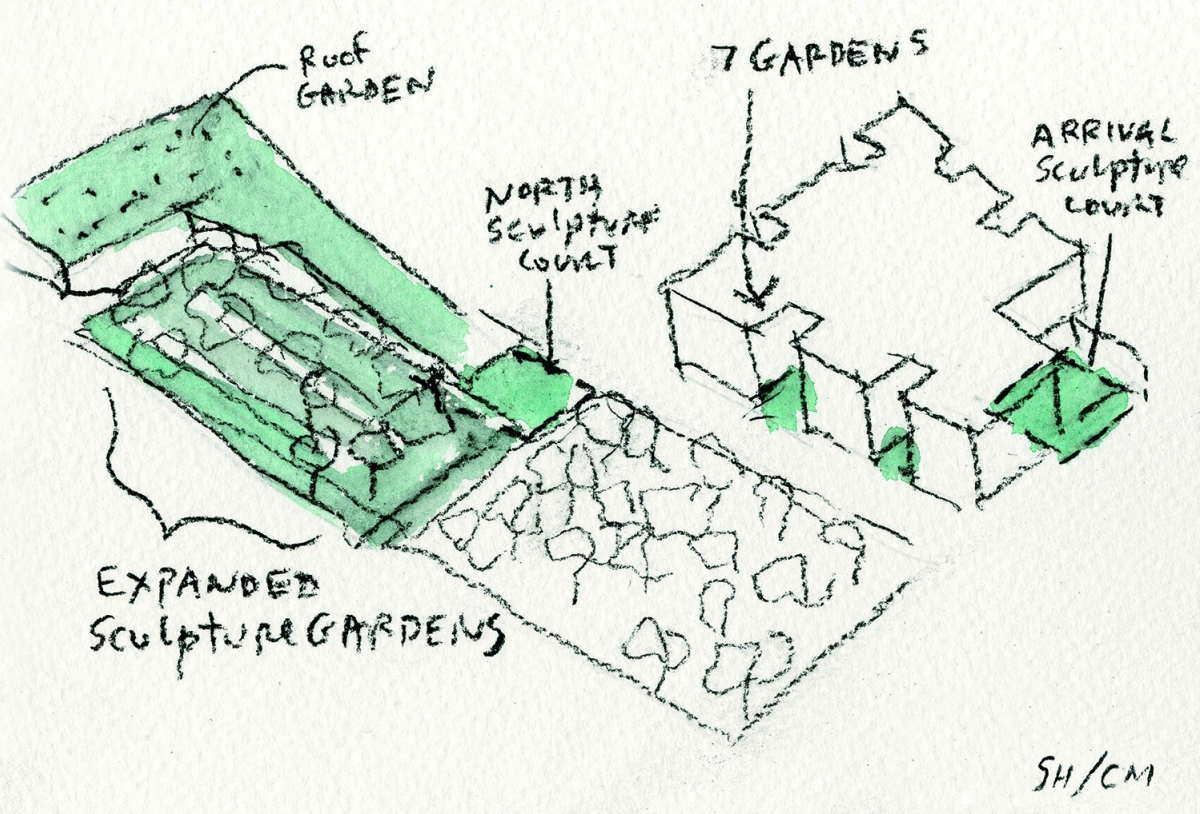 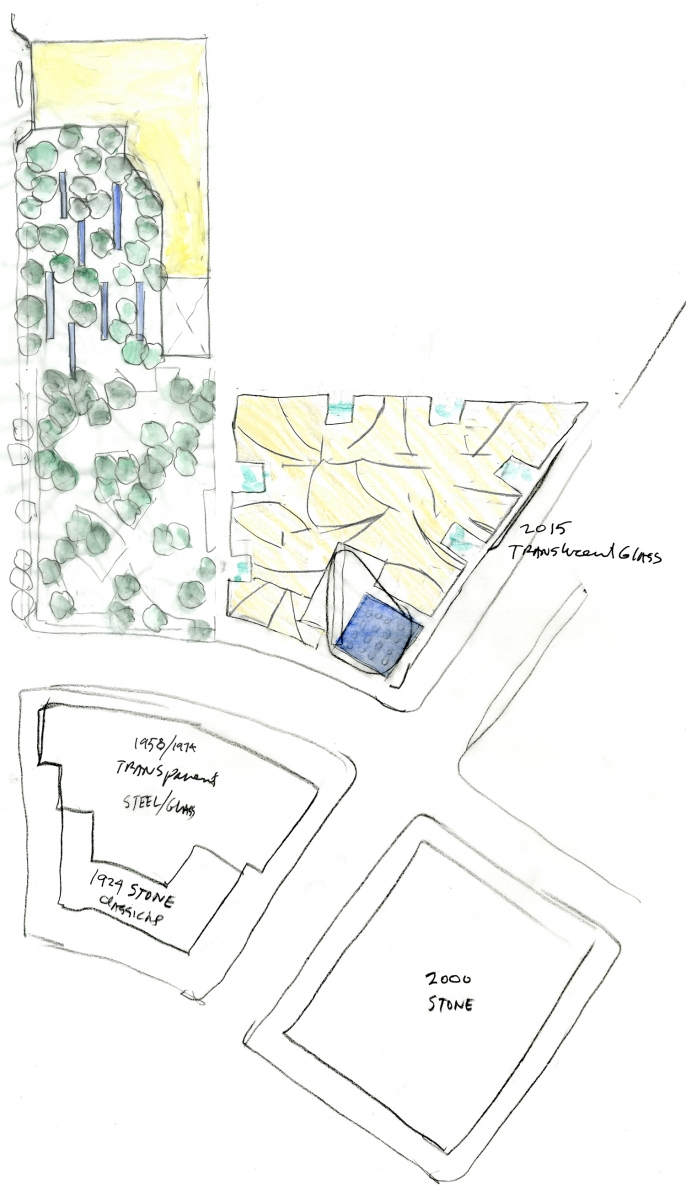 Holl: The thick translucent glass façade creates the perception of trapped light, diffusing it internally and giving off a luminescent glow. One of our original five concepts for the Kinder Building, which were presented as guiding principles in the design competition, was to create a thick translucent exterior that would stand in complimentary contrast to the adjacent transparent glass and steel building by Mies van der Rohe and the opaque stone building by Rafael Moneo. To achieve a thicker translucency in a new way, we experimented in our workshop with semi-opaque shapes and textures in light. Using acrylic rods, which we cut in half and laminated on acrylic sheets, we discovered the internal glow and arcing variation of light and reflection across the curved surfaces that are now visible in the building. The curved white surface of the façade acts as a screen against the trees’shadows in direct light and provides a satin reflection of the green landscape and blue sky in indirect light. We investigated the ecological potential of this façade system with climate engineers Transsolar, setting the tubes along the exterior wall to create a 90cm-wide cavity open at the top and bottom. The ventilated façade allows hot air to passively rise up and out of the cavity between the glass tubes and the structural cast-in-place-concrete walls. The heat gain is funnelled out at top at the roof, creating a ‘cold jacket’ around the building. 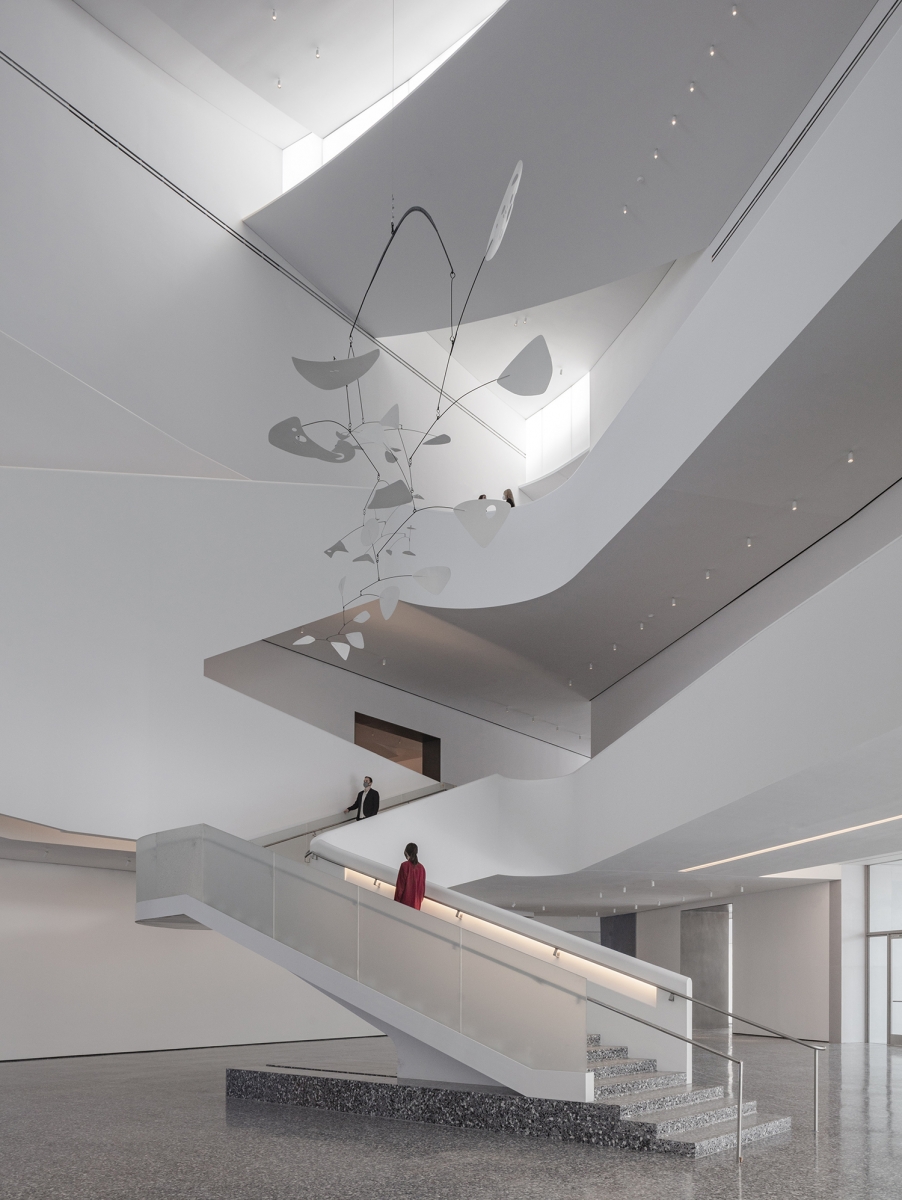 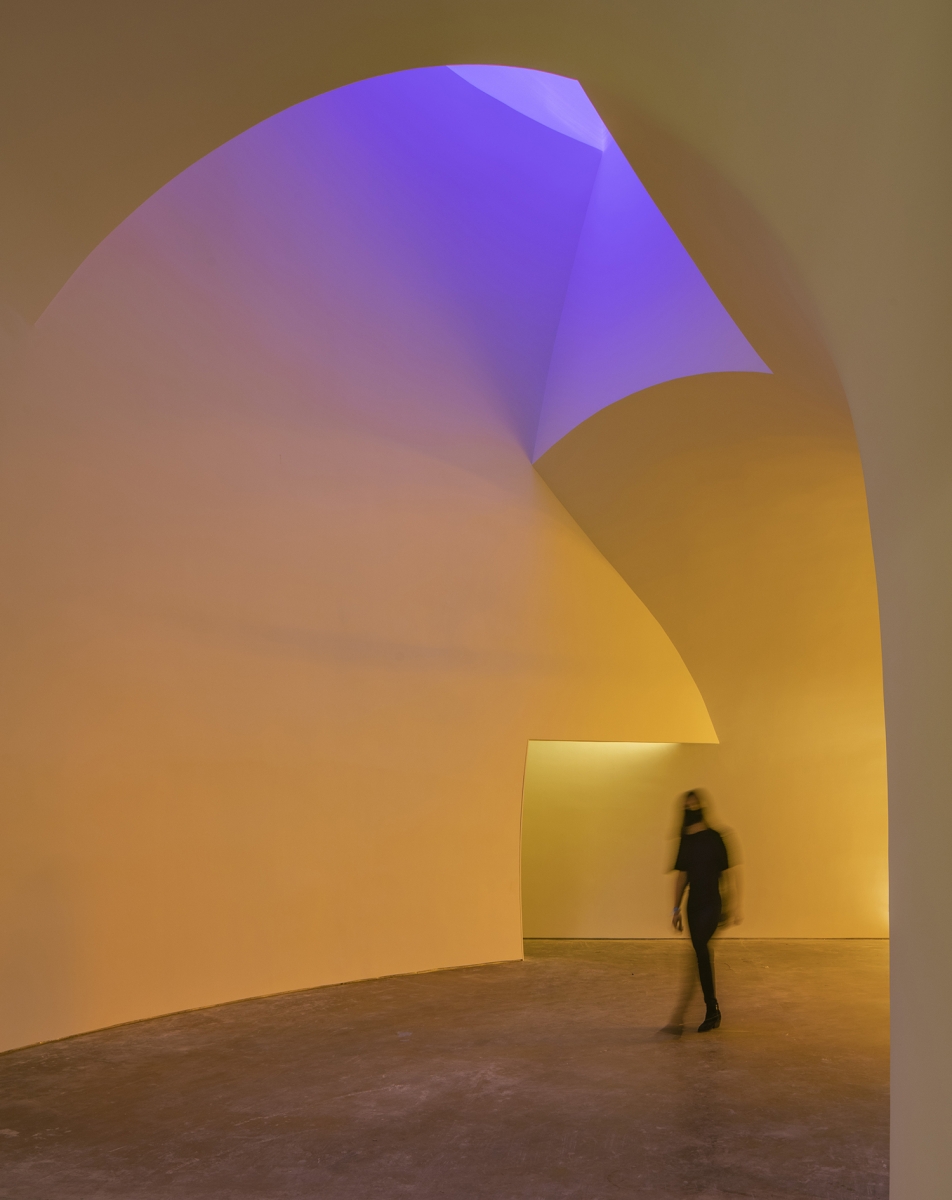 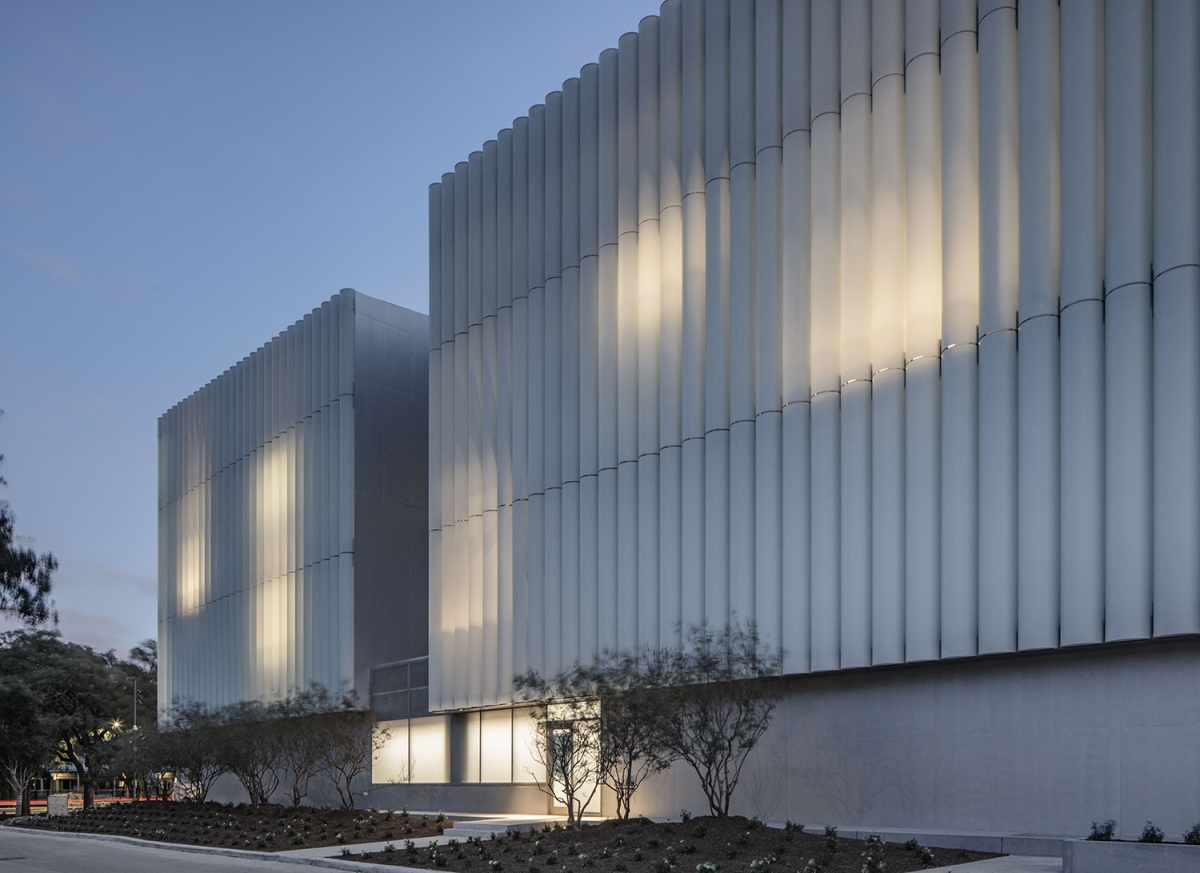 The Museum of Fine Arts, Houston

Steven Holl
Steven Holl graduated from the University of Washington and pursued architecture studies in Rome in 1970, and in 1977 established Steven Holl Architects in New York. He tries to blend space and light with great contextual sensitivity and to utilize the unique qualities of each project to create a concept-driven design. He specializes in seamlessly integrating new projects into contexts with particular cultural and historic importance. He has been recognized with architectureʼs most prestigious awards and prizes. In 1998 he was awarded the prestigious Alvar Aalto Medal, and in 2001 France bestowed the Grande Médaille dʼOr upon him, for Best Architect of the Academy of Architecture. He is a tenured professor at Columbia Universityʼs Graduate School of Architecture and Planning. He has worked in various fields including publishing, exhibition, and lecture. Steven Holl Architects is a innovative architecture and urban design office working globally as one office from two locations: New York and Beijing. Steven Holl leads the office with partners Chris McVoy, Noah Yaffe and Roberto Bannura.
No. 639 February 2021 Steven Holl Nancy and Rich Kinder Building The Museum of Fine Arts Houston redevelopment The Glassell School of Art Texas Light glass tube tunnel
LIST
bookmark_border
favorite_border
14