A Tight or Loose Fit

Small public architecture projects are difficult. Construction budgets are a defining factor for every aspect of the project, often cutting both design fees and timelines short. In spite of embracing the unprofitable nature of the project from the onset, a lot more time and hard work ends up being poured into these projects. Nevertheless, this can be a rewarding experience. Architects can engage in both design and auditing, and once the client recognises the good intentions of the architect, projects are generally completed and considered successful.

Doksan Library Remodeling is an example of this kind of project. Early last year, we received a call asking us to take on the project, and we visited the site with the simple intention to avoid turning them down straight away. However, that visit changed our minds. The barebones of the Doksan Library turned out to form the perfect candidate for a remodeling project. The small library was in possession of a spacious central atrium, with sixteen skylights piercing the ceiling above. A wide-set staircase continued from the lobby to the second floor, with neighboring forests dipping into view through the large surrounding windows. Regrettably, at the time, this description was more fitting for the potential of the project perceived by the architect, or even as an estimate of the original design intended by its original architect. The reality on-site was completely different. Two decades following its construction, the atrium had become full of books, with the garden beyond obstructed by yet another storage space turned shipping container. The lack of light indoors led to a pervasive sense of gloom, not to mention the palpable absence of views of the forest. A connecting bridge impeded the intended line of sight from the main entrance, while a disorderly circulation complicated fluidity between the book storage spaces and reading rooms. 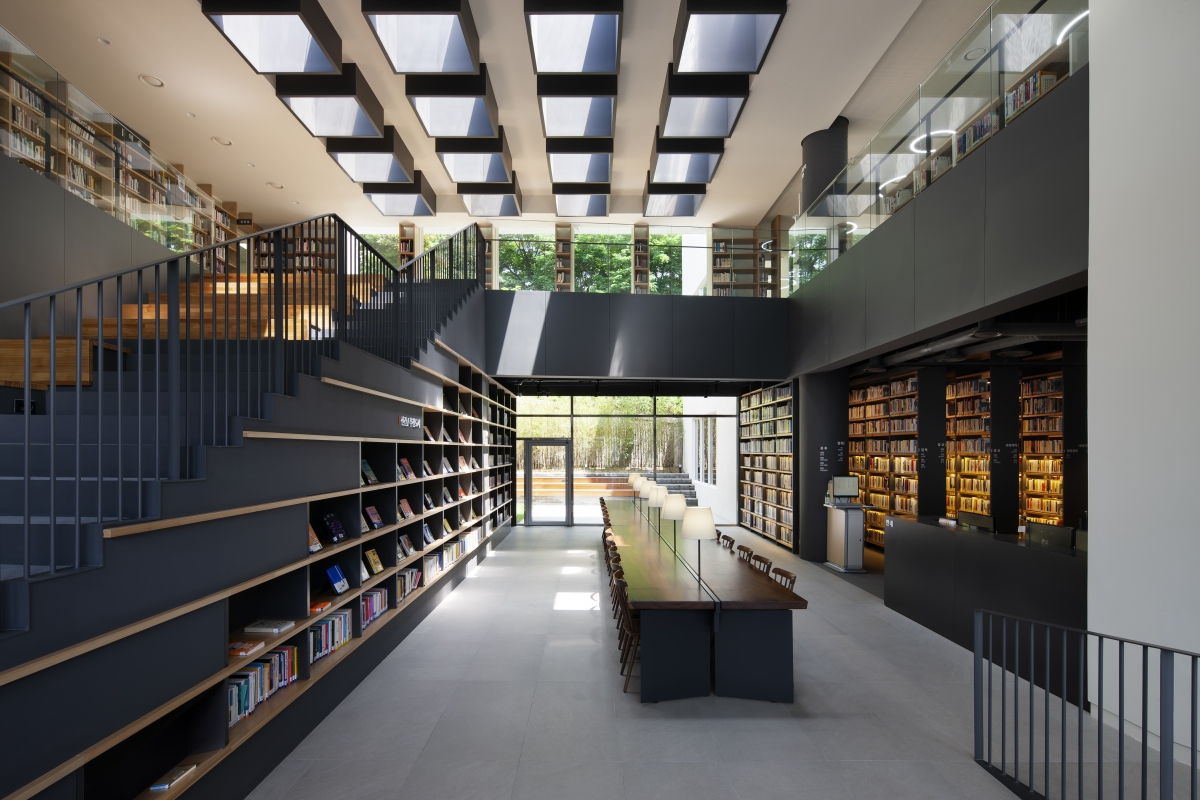 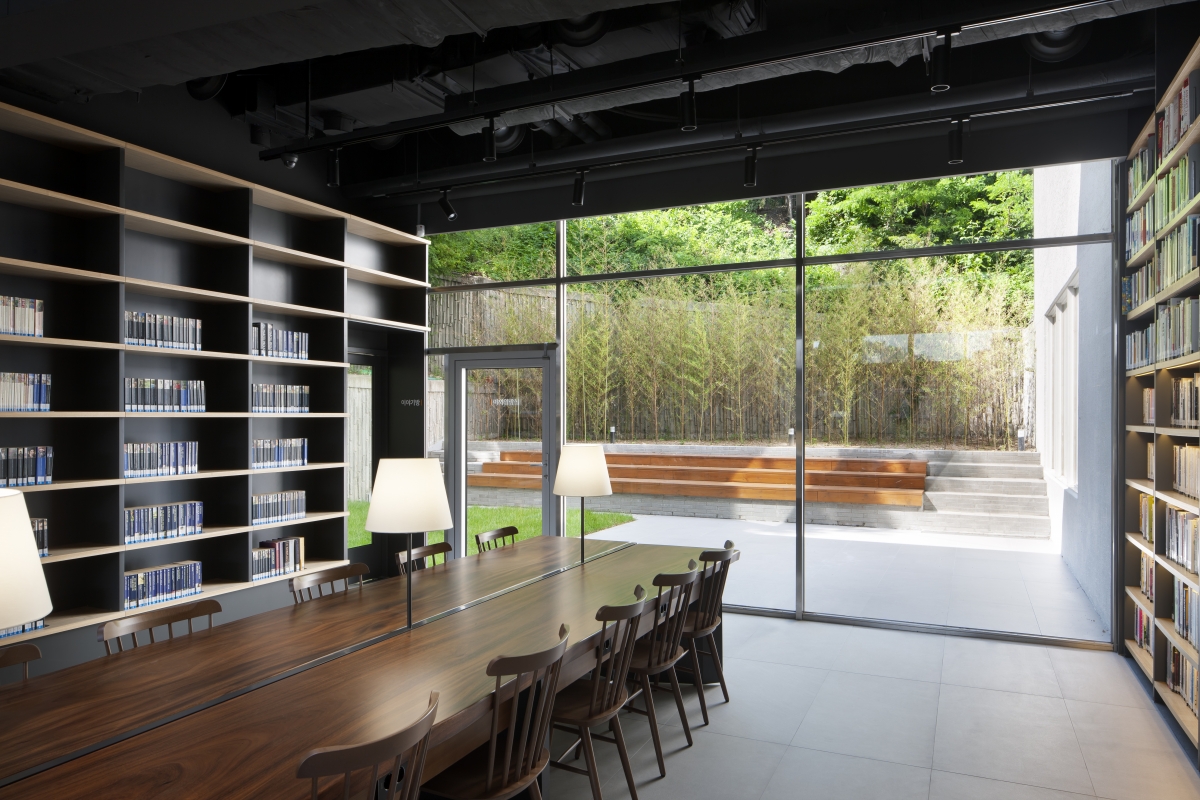 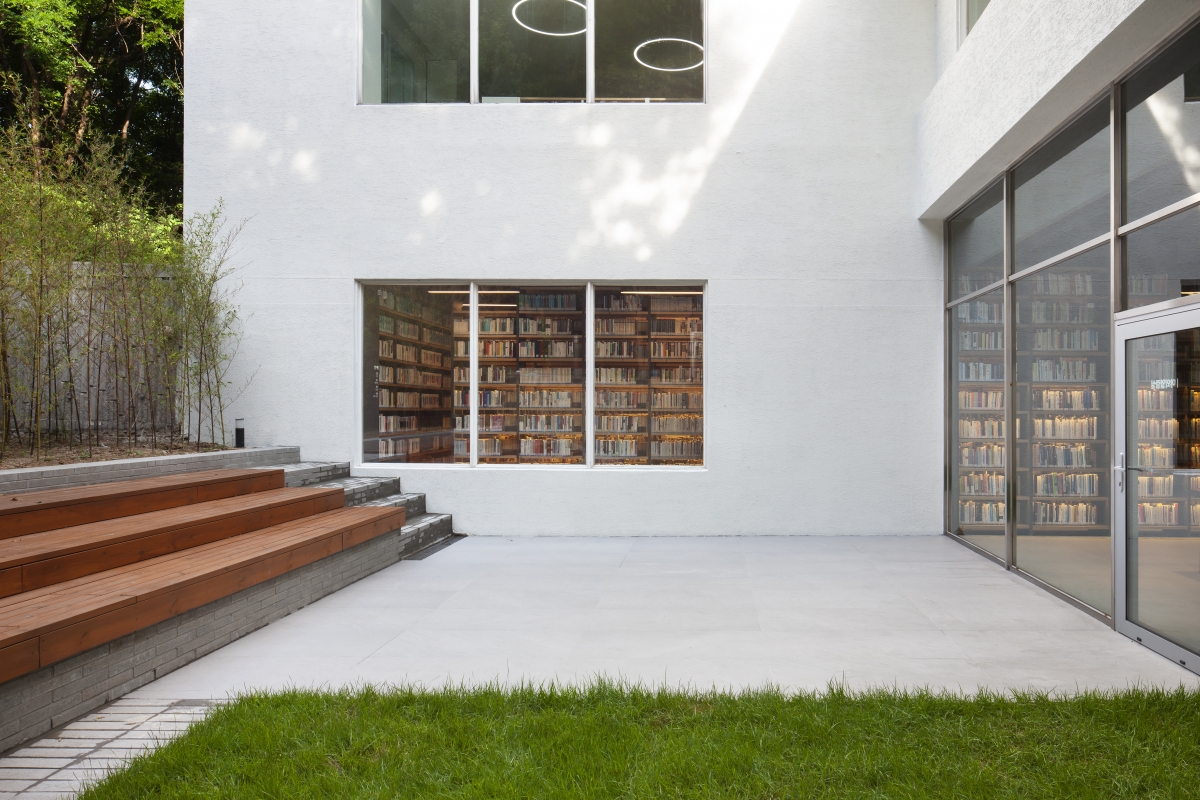 The remodeling process was extremely simple. We recovered the original design concept behind the library and wiped away any of the dingier traces of aging. First, everything that obstructed the line of sight from the main entrance to the garden was removed. The lower ceiling of the connecting bridge – an impediment to the view upon entering the library – was dismantled, and the utilities and piping were relocated elsewhere. The once stuffy entrance was now equipped with an approximately 1m-tall vertical void. We cleared away the bookshelves crowding the atrium and dismantled the shipping containers in the garden. At long last, a single clear space connected the main entrance to the hill backing the site, and scenes of the forest begun to emerge into direct view. The next step was to relocate the books removed from this emptied-out space. This desperately called for a strategy that would maximise the efficiency of the space using the same surface area. Adopting a particularly languorous axis defined from the front to back of the library moving through the central atrium, ten-shelf high bookcases were installed for book storage on the inner chamber of first floor composing an extremely compact and tight fitting space. Then, a more loosely established vertical space was inserted to connect the first and second floors, with the latter housing a relatively more relaxed space than the former.

Re-establishing the spatial hierarchy through contrasting densities allowed us to restore the original function of the small library as a convivial meeting place for locals, as well as to open up the space through a more fluid circulation. The once dark and stuffy second floor reading rooms now featured broad window views of the forests, resuscitating a once obstructed space, as the library began to resonate with its surroundings. Two 6m-long wooden tables were placed lengthwise in the now bookcase-free atrium. Our hope was that this small neighbourhood library would have at least one open space for leisure activities. The sixteen skylights above the tables were accentuated by a series of prominent square frames, with indirect lighting installed to softly illuminate the tables in the evening. A bookcase was placed to the side of the wide staircase leading to the second floor, transforming the space as a place to read, and small personal spaces were installed alongside each of the windows on the second floor. These spaces – both dark and bright, full and empty, compact and open, each finished in tones of dark grey or luminous white – partition this library into a composition of binary oppositions. However, just like the dichotomy of life and death, these binaries amplify the impact of each of these spaces in this small library. 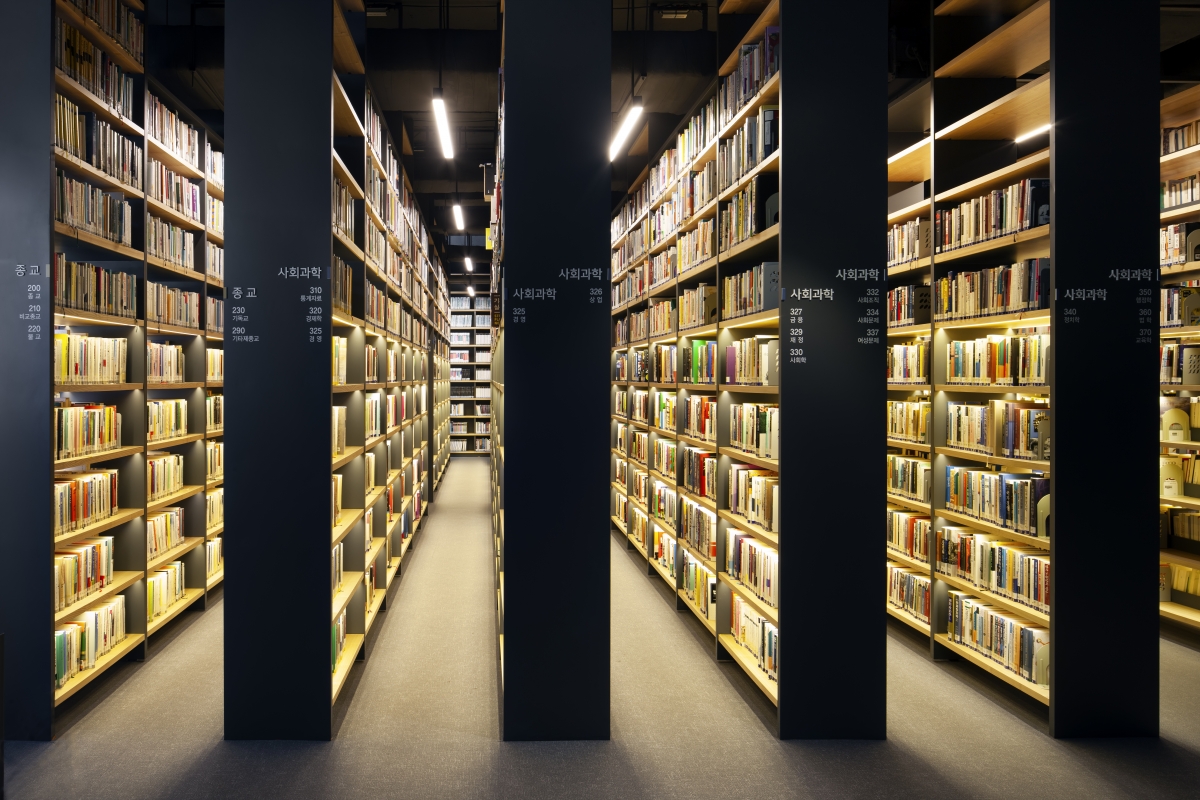 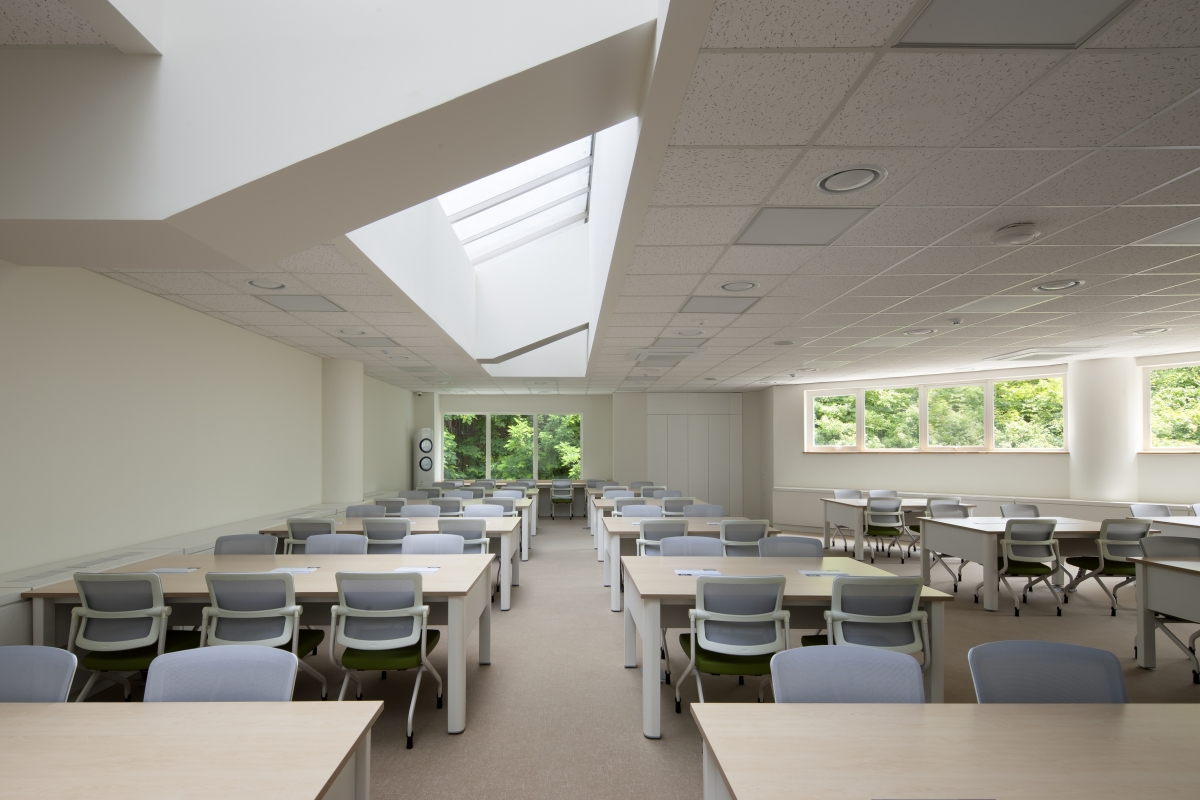 Beginning with the remodeling of a crumbling warehouse in the cattle market of Doksandong, our acquaintance with Geumcheon-gu district then led on to a small kindergarten project. It was, perhaps, this friendly feeling of familiarity that had left us feeling connected to this non-urban like setting. Yet, looking back, there was something more. The local official strived to understand the architect’s design intentions and was exceedingly courteous towards any of the inevitable modification requests. The district mayor openly expressed gratitude for the passion and hard work of the architect, and this instilled within us a sense of gratified responsibility. Working in architecture for the past twenty years has taught me one thing: architecture is a virtuous circle. The architect must be fully dedicated to what he is assigned to, and when a client who recognises this is thankful, the architect will try even harder. A contractor who testifies to such a relationship of trust will join this effort too. Such a virtuous circle is what makes great architecture. It is neither an issue of budget nor of time.​ 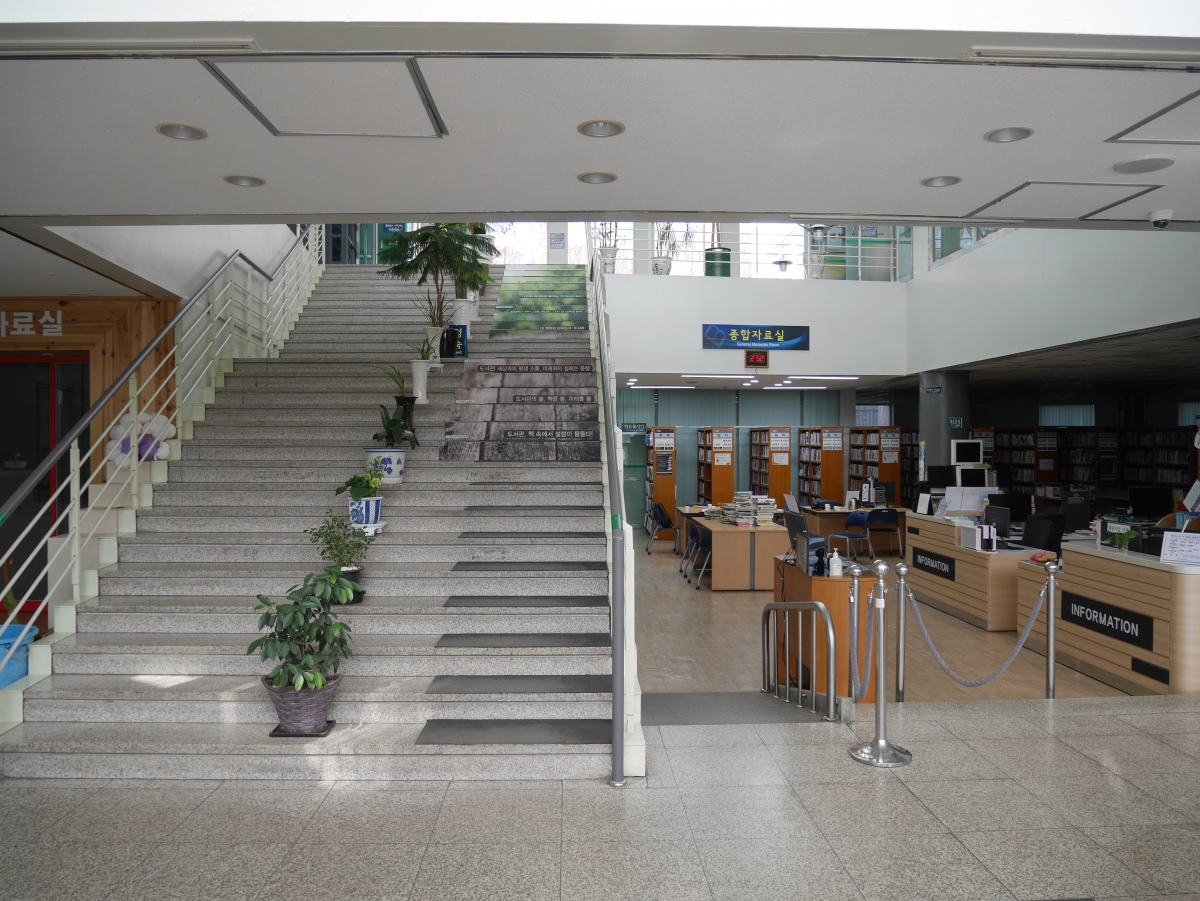 Lim Yeonghwan
Lim Yeonghwan received his bachelor’s degree from Hongik University, a master’s degree from University of Pennsylvania, and a Ph.D degree in architecture from Seoul National University. He is presently a Professor of Architecture at Hongik University while also serving as a partner at D.LIM architects. His major projects include the Ahn Jung-geun Memorial, CJ Nine Bridges The Forum, Stardom Entertainment Office, She’sMedi Hospital, Naver Nursery School, and Three Yard House. He has received fourteen architectural awards, such as the Seoul Architectural Awards, the Korean Architectural Awards, the ‘Best 7’ Award from KIA, and the Young Architect Award.
Kim Sunhyun
Kim Sunhyun received her bachelor’s degree in architecture from Hongik University and a master’s degree in Project Management from Harvard University. She worked as a senior project manager in the global firms Jones Lang LaSalle and Skylan, Inc. She has been a co-partner at D.LIM architects since 2007 along with Lim Yeonghwan.
No.635 October 2020 Doksan Library Remodeling Doksan Library Seoul Geumcheon-gu Public Renovation Remodeling Density Courtyard Lim Yeonghwan D.LIM architects
LIST
bookmark_border
favorite_border
31