Suum Urban was the name given to the project by the client couple at the time of the commission. It was chosen to be the downtown version of Suum, a café run by the client’s parents in the outskirts of Cheonan. The project site, the venue for our first meeting, is located by the side of a large freeway with lots of traffic, unlike its predecessor which is surrounded by mountains and a reservoir. In an area without much foot traffic, the site felt a little isolated amidst its jumbled context of small houses and shops. We felt lightly in awe of the courage of the client couple who wished, surprisingly, to open a bakery café on such a site. Perhaps it was due to this courage that we made the audacious promise to build them a project never before seen in Cheonan.

First, we considered how to best organise the complex environment surrounding the site, and how to best combat the issue presented by traffic congestion in the area. From these two points, we found a way of turning the given circumstances to our advantage by increasing visibility from the street. The surrounding shops were already asserting their presence with their large flashy signage, and so we decided to confront this situation directly by doing nothing. To put this more precisely, we decided to reduce the amount of external ornamentation and more simply to emphasise a single part of the front façade of the project. A straight rectangular building with an exposed concrete finish was devised, and dual polycarbonate sheets were installed on the façade facing the road. This façade allowed the glow of sunlight to pass into the building during the day, and for the light inside to radiate beyond its walls at night, making the project seem like an enormous light fixture. The polycarbonate panels added with such intentions disperse the direct light while adding an unexpectedly mysterious atmosphere to the internal spaces. Underneath this opaque façade, a window at knee level was inserted allowing people to peer into the café through this small outlet. 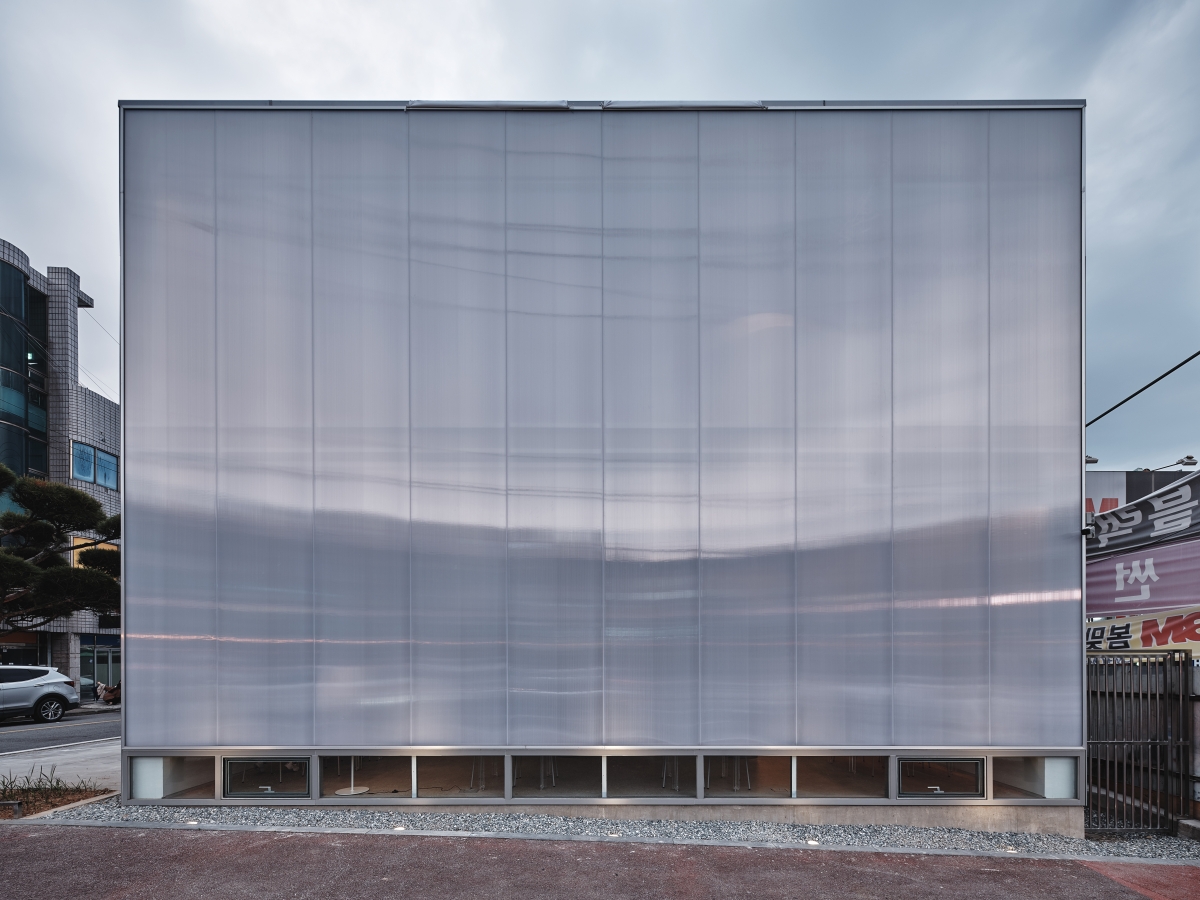 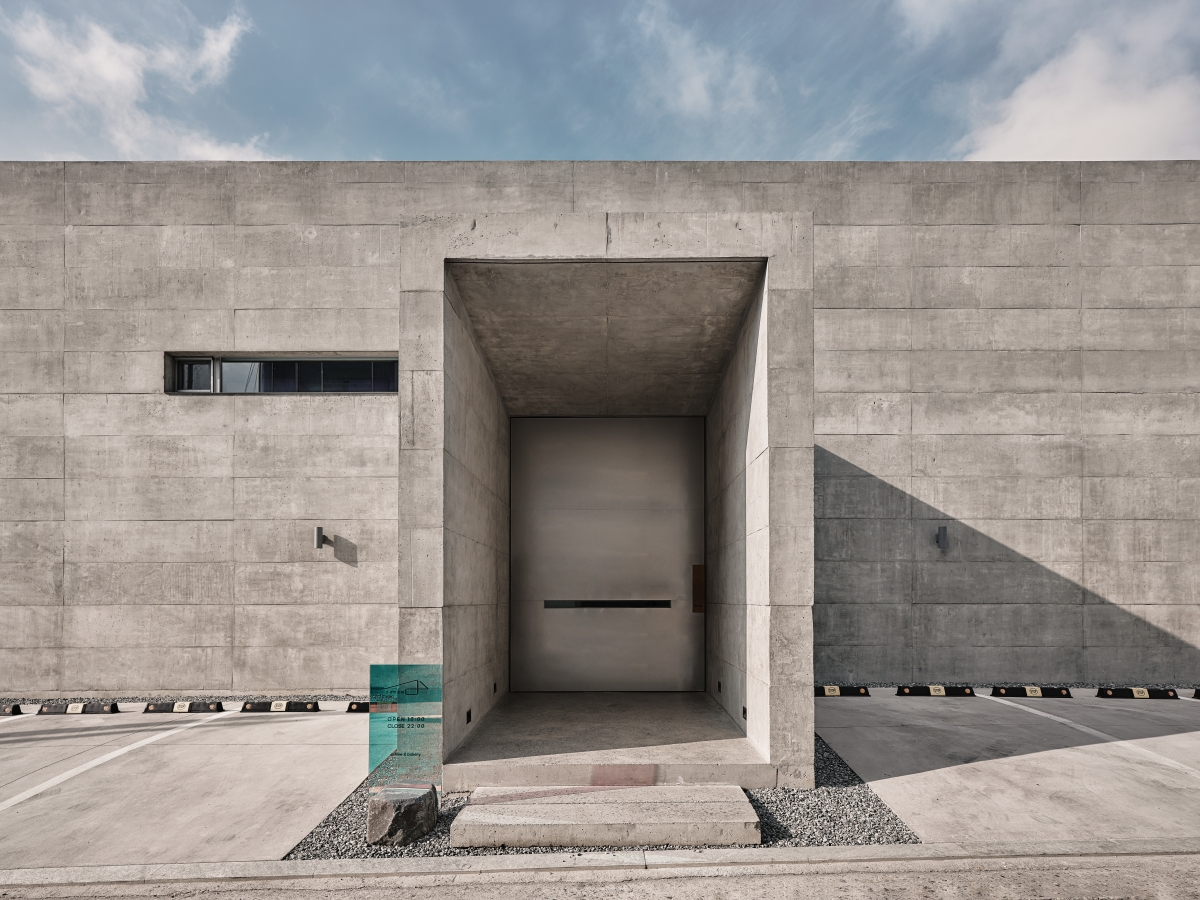 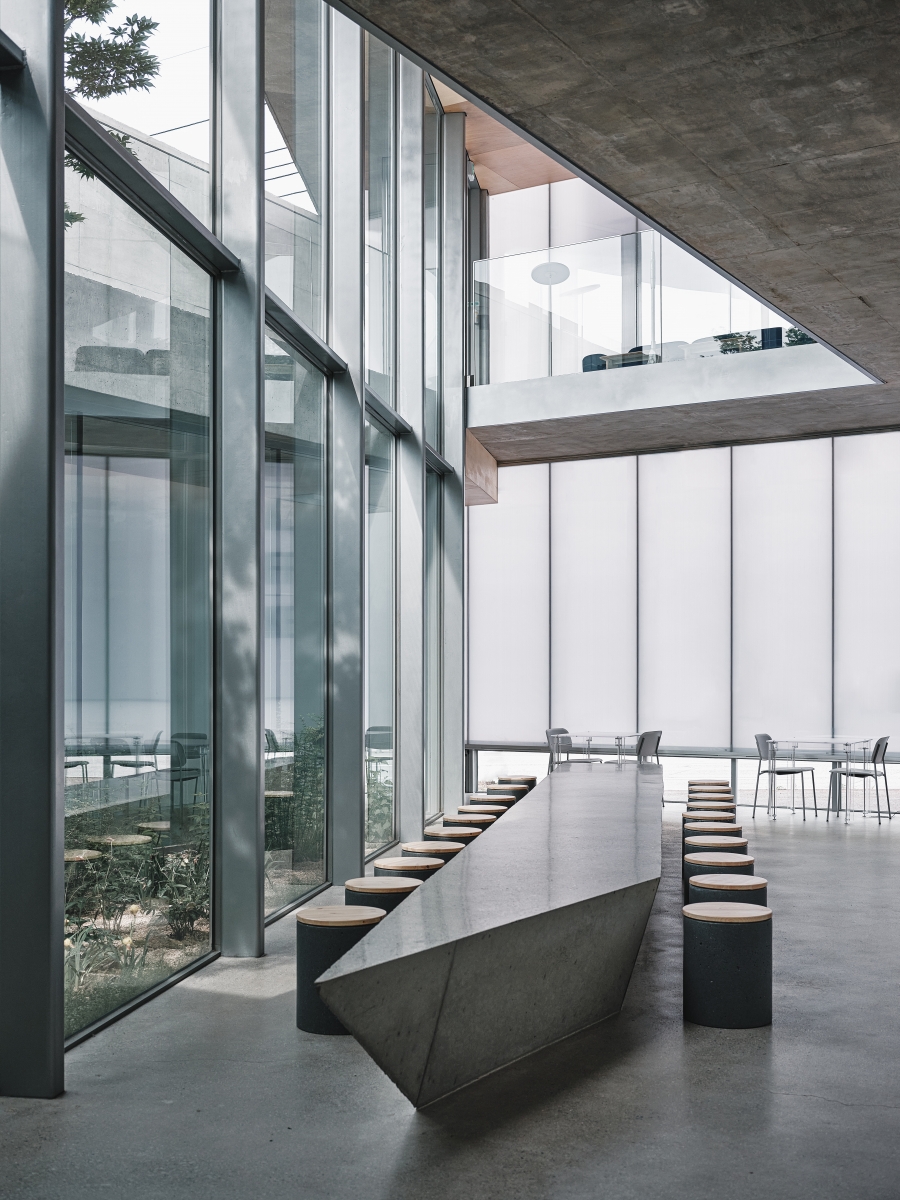 We hoped that the place would become a serene and private space. We hoped the project would possess an exterior that appeared to conceal itself, yet it would open up access to a new world once one pushed the large and heavy door open. Unlike the façade of the building, the side of the project was finished with concrete, and the iron door was installed in the middle of this long grey wall, which at times surprises visitors with its height and width. Nevertheless, upon pushing open the door and entering the confines of the café, people find themselves surprised by a green garden. The garden of this café is situated within a triangular courtyard, planted with tall maple trees, rocks and flowers. We conceived of this courtyard as the starting point and conclusion of our design for Suum Urban. The space not only signals a point of departure and an arrival point in the circulation within the café, it also introduces the climate of forests and wind, however minimal, to this desolate neighbourhood. Suum Urban is a café designed so that visitors feel a sense of serenity within the city. As such, we wanted to ensure the tone of the interior and the viewpoints from within towards the courtyard permitted sufficient experience of its overall ambiance. The central void means that visitors can look into the courtyard from anywhere inside, and we have controlled, to the fullest extent, the use of ornamentation in the spaces, to allow customers to focus on deriving pleasure from the courtyard and taking in the gentle sunlight. For such an experience, it is better to have minimal elements liable to distract, and so low set tables and chairs were also made to match. For the same reasons, the blueprint excluded any robust columns in the courtyard and the void space, and therefore the second floor slab was attached to the roof using steel wire to resolve the structural load. A frame was also designed to stabilise the two floor high window. By planning a gravel terrace and a stair deck on the second floor, visitors can go outside for fresh air, leading them to appreciate the court downstairs and the beauty of the sunset at twilight. We hope that scenes of the courtyard will change from moment to moment and from season to season, introducing a sense of plenty to the place, and, as if to affirm our expectations, the place attracts not only people but little birds.
From the outside, Suum Urban looks like a huge immobile rock mass. However, upon peering inside, one imagines that it is a place of more liveliness and movement than in any of those surrounding. We hope that within such a space visitors will momentarily feel a sense of peace, and notice small but meaningful experiences in their busy lives. ​​ 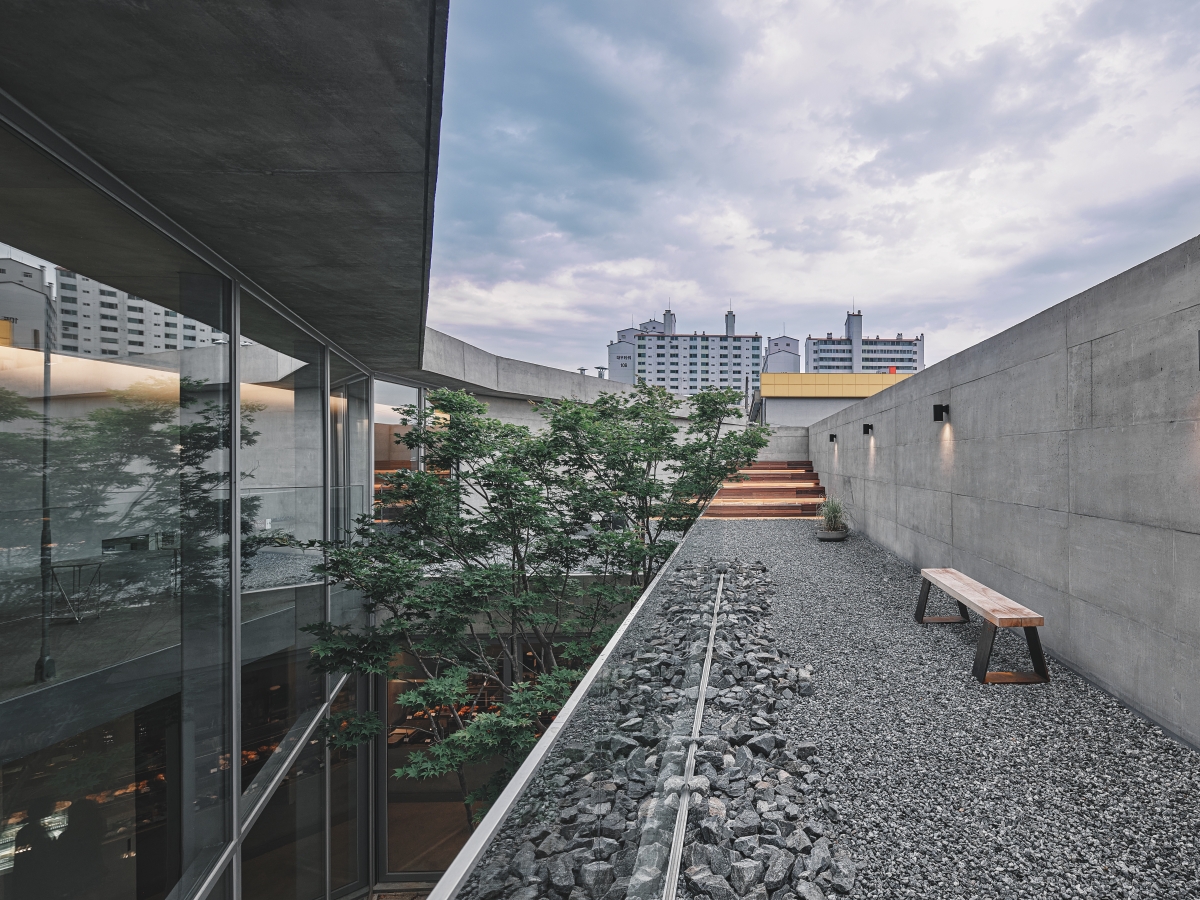 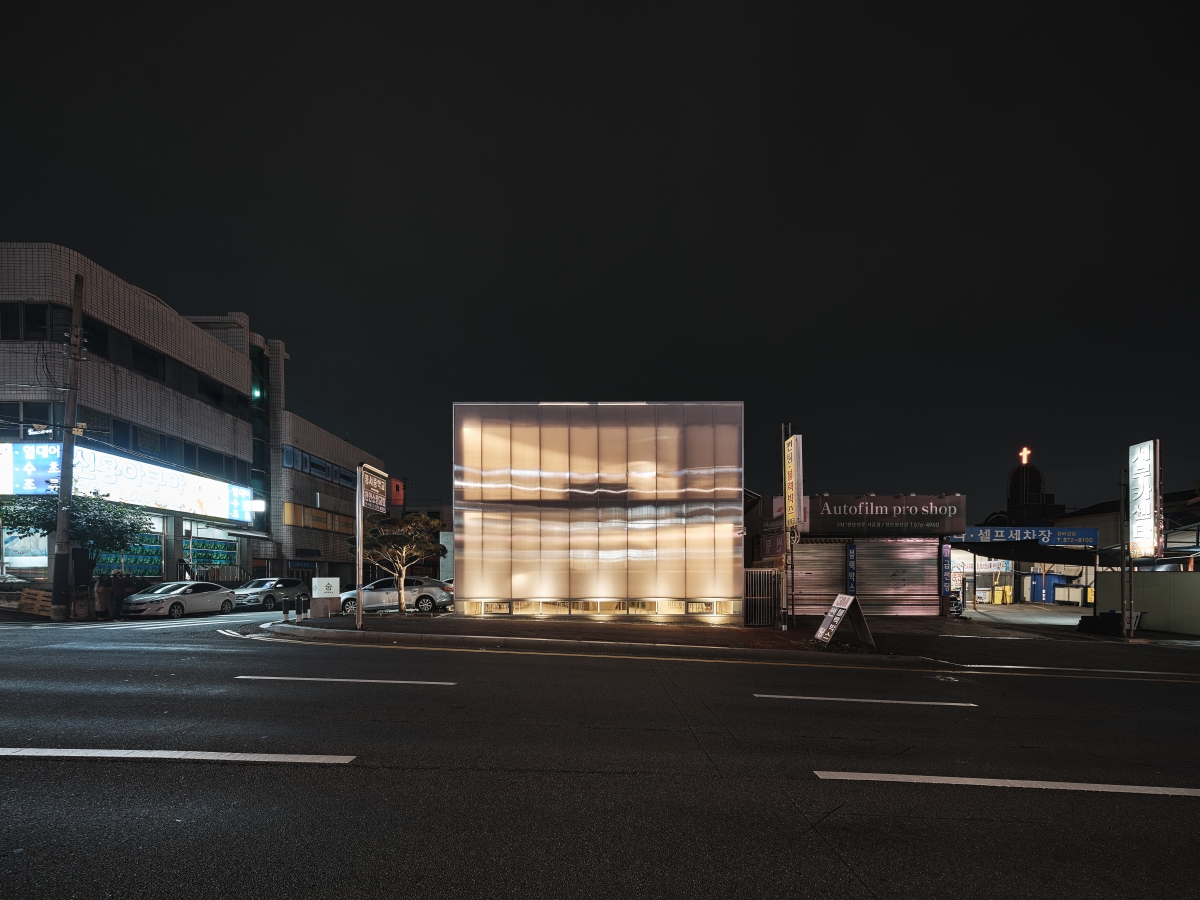 Archihood W×Y is located in Seoul, Korea and was founded in 2013 by Kang Woohyun and Kang Youngjin. Its design philosophy is to provide a good and friendly design for everyone like to meet their friendly neighbour. Archihood W×Y design work is focused on ‘gaps and boundaries’ and ‘familiarity and novelty’. Its recent works include Seorimyeonga and Doo Jip. They also received the 2018 Korean Architecture Award and the Korea Rising Architect Award.