Park Semi (Park): Describe the conditions of the site on which North Perth House is located, and the client’s background.

Nic Brunsdon (Brunsdon): The North Perth House is an urban-infill project in inner-city Perth, Australia. Located on a small residential street, the design was responsive by providing a diverse range of spaces determined within a simple structural arrangement.

The efficiency of construction and the economic use of labour were key considerations when managing the tight budget and a difficult site with restricted access.

The clients are a young design-oriented family who deliberately purchased this compact site, closer to the city for its amenities and conveniences. Their former homes were small-lot Japanese houses and they wanted a more efficient and mindful house. 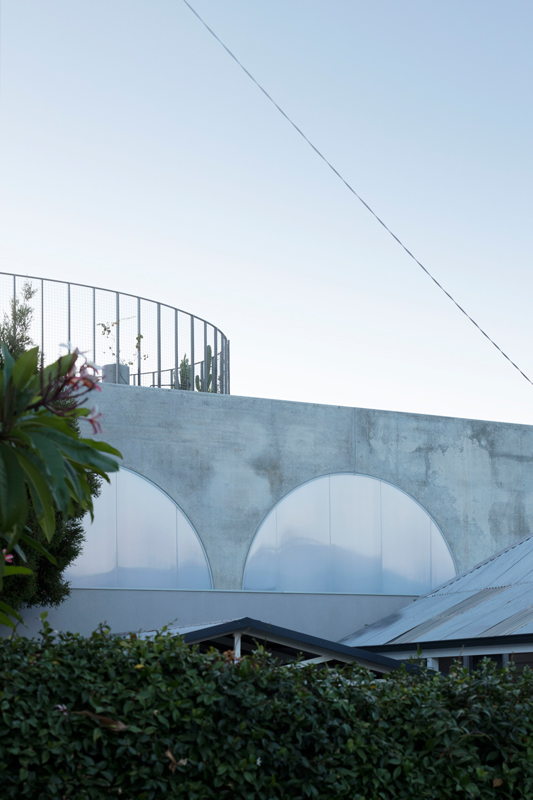 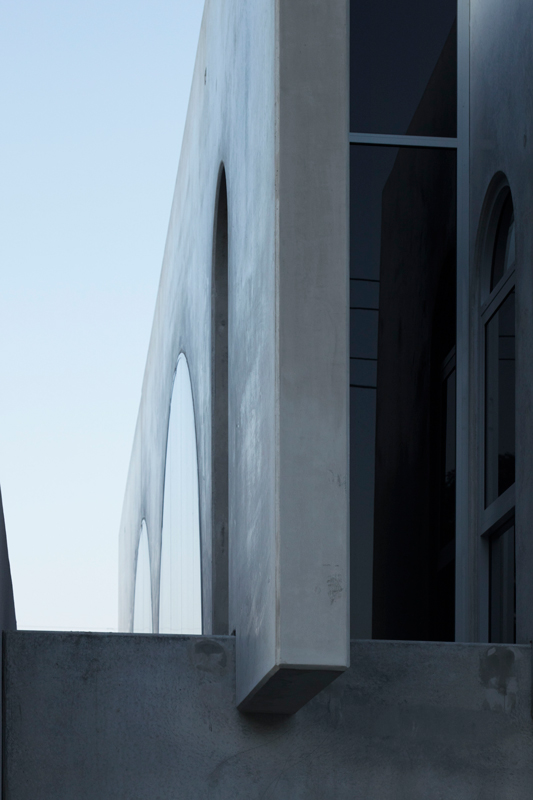 Park: A distinct feature of this house is that it was designed using arched precast concrete. It is well known that precast concrete is a construction method distinguished by its time saving and budget reducing properties. Aside from this, I would like to know any additional advantages or disadvantages you found when using this material and method, as well as any anecdotes you may have of the construction process of the North Perth House.

Brunsdon: It is an innovative process, in that there was a critical need to understand and incorporate knowledge of the adjacent building into the design and construction. As the design was entirely dependent on a commercial pre-cast concrete system, feasibility and technical proficiency had to be explored with rigour and sensitivity early in the process.

Although the primary conceptual system is based on a well-understood commercial building method, the project nonetheless gave rise to a series of innovative assembly and construction outcomes, such as hidden insulation layers in the concrete and polycarbonate infill sheets to the east and west panels in order to meet the sustainability performance criteria; increased structural panel capacity which resulted in a reduction of framing and supports required; and the erection of the entire building in only 48 hours.

Park: An arched concrete panel seems to satisfy all of its possible roles in terms of structural, functional, and aesthetic aspects...

Brunsdon: Concrete pre-cast panels are employed as both the finishing material and the structure of the building. By using this commercial construction system as the main conceptual organising principle, the project was able to save time and to gain significant budgeting advantages , while maintaining a legible design integrity and innovative practice in house design and construction. 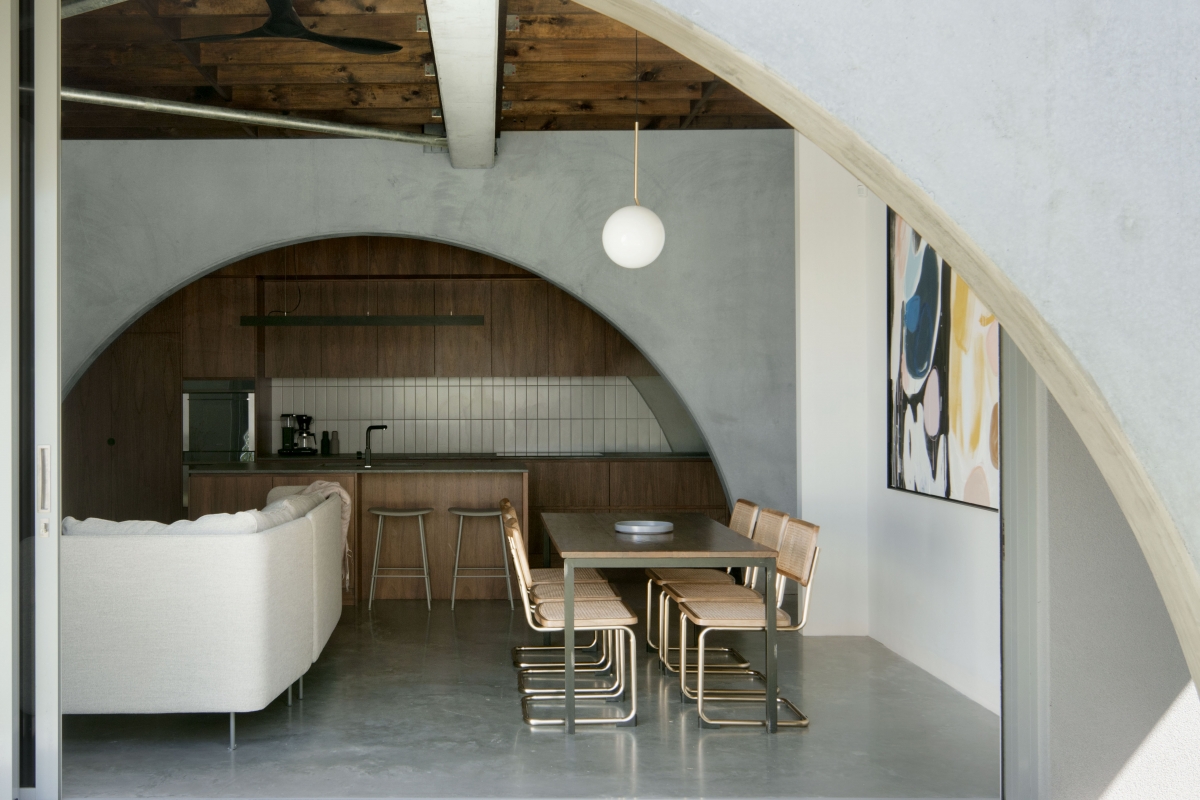 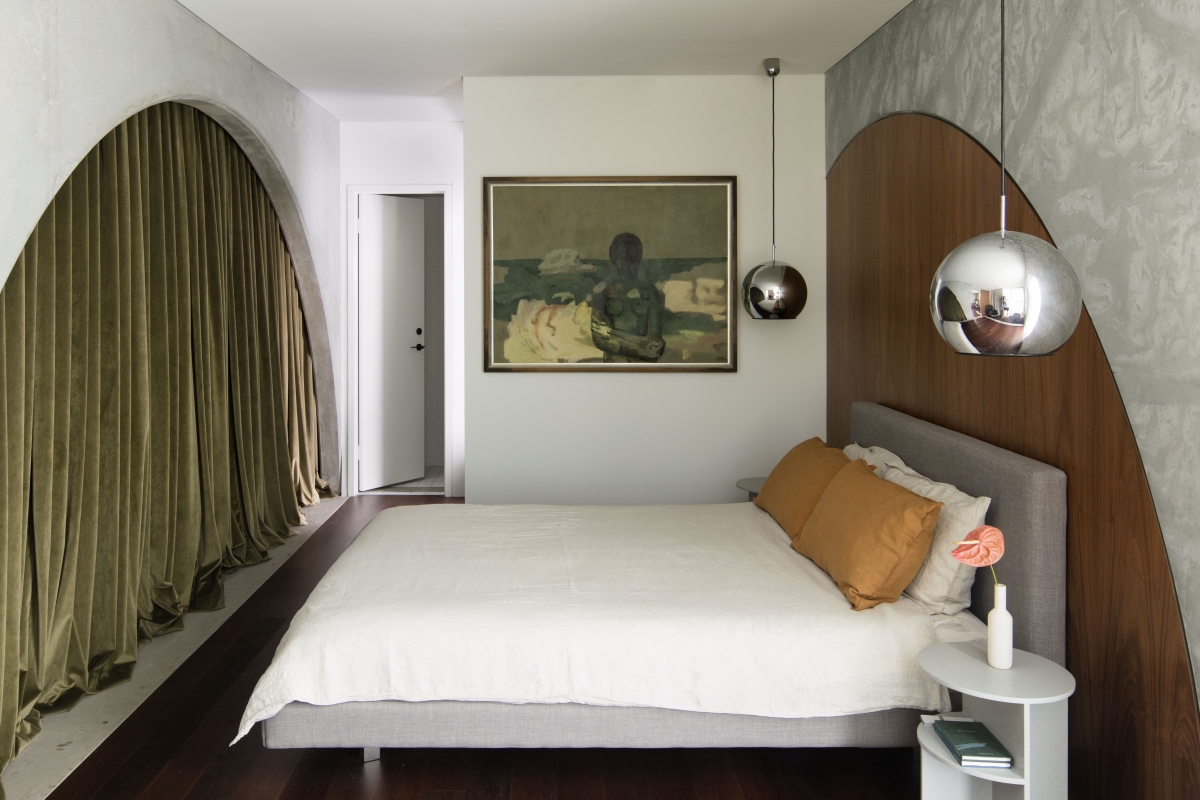 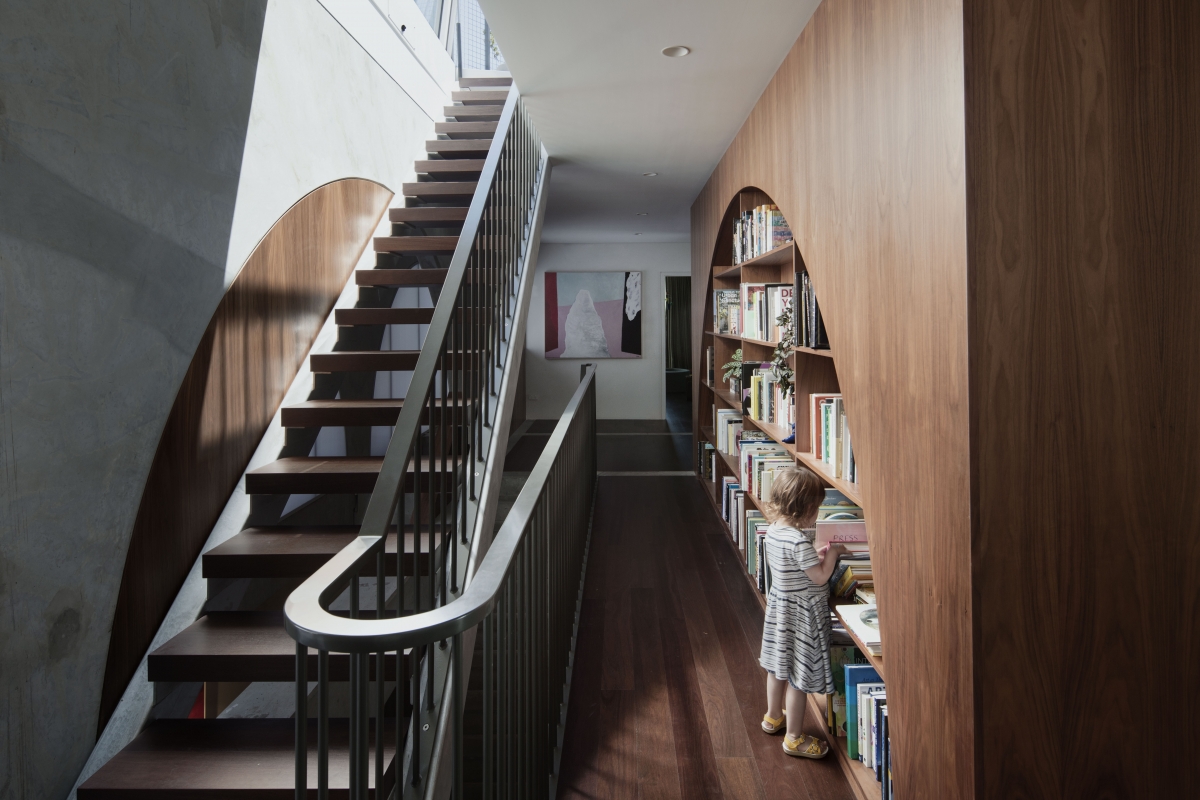 Park: In North Perth House, eight precast concrete panels are arranged in a grid shape to form the interior and exterior spaces of the house. It is easy for a grid-shaped composition to be thought of as simple and dull, but in the North Perth House the living spaces have been divided and connected by blending narrow-arched and large-arched openings. Therefore, the house achieves a rich sense of space by accommodating these adjustments between its sections. I would like to hear the reasons behind this spatial plan and section composition.

Brunsdon: On the ground floor these panels demarcate sheltered zones set back from the street towards the rear of the property, each signifying a threshold that goes deeper into the private life of the house. This is true for the garage, gallery, vestibule, kitchen, then living room and Garden.

On the first floor, the panels rotate 90 degrees, introducing long views back to Perth city on the south side and welcoming northern light into bedrooms. Moments of overlap allow for interesting spatial dynamics and vertical and oblique views through and out of the house.

Each panel is punctuated with one of two kinds of arch, a grand arch and a pedestrian arch. The grand arch is used to make the more significant gestures in the house – the prospect from the kitchen, a sun-shade to the rear, a hidden robe and a gallery window. The pedestrian arch is for clear circulation.

The panels and arches are never covered, always treated with respect by the other project elements. When the openings are not required, the timber and polycarbonate sit inside the arches and trace the curvature, always keeping the circumference as read. Floor coverings sit flush so that on the first level you are walking on the tops of the ground floor panels below, always oriented to where you are within the entirety of the building and its arrangement. 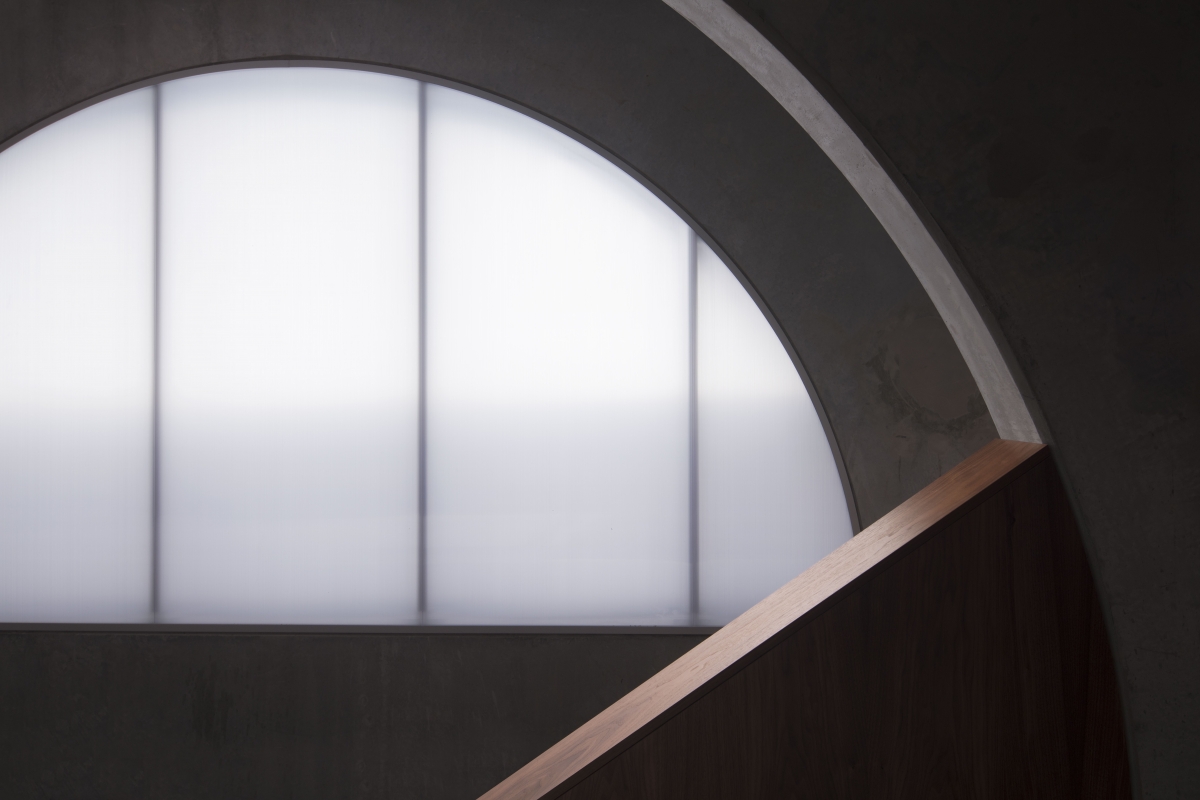 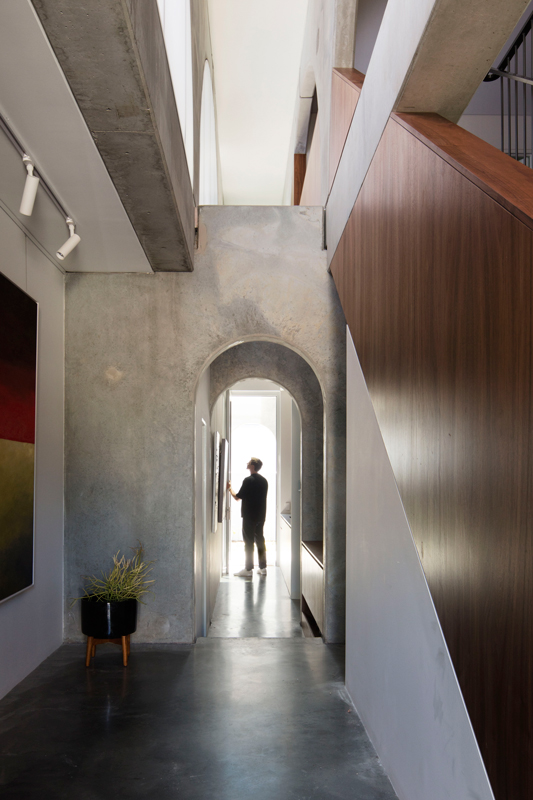 Park: The combination of interior materials also appear daring. In what ways were concrete, wood, metal, and so on used? I also here assume that you must have paid careful and special attention to luminescence and the use of colour.

Brunsdon: The material palette is deliberately restriced to these three treatments: raw concrete for the heavy and hard-working elements like the structural panels and the floor, timber for the intimate moments such as in the furniture, kitchen joinery, balustrades and bedheads, and translucent sheeting to arbitrate between the hard east and west sun and to provide a softer light throughout the full height of the interior spaces.

Serendipitously, when the initial design proposal was made to the clients, detailing a house with an arch motif, it triggered childhood memories for them of ‘Nonna’s house’, a ubiquitous Australian brown-brick 70’s middle-ring suburban home with arches throughout. To maintain that spatial history and to bolster the emotional familial connection to the arch, original light fittings from that house were also salvaged and incorporated into our design at key moments.

Park: What architectural achievements do you consider yourself to have made in the North Perth House project?

Brunsdon: North Perth, where this project is located, is a suburb undergoing a period of transition, with few defining features or historic character. It is on the fringes of the city at the furthest reaches of the city’s suburbs. The project doesn’t deliberately try to distinguish itself from its immediate context, nor does it resolve to fit in. It is distinct in its presentation and the arches to the east and west first floor façades hover somewhat strangely over the traditional rooflines of neighbouring houses.

It proposes a different form of inner-urban occupation: one that is guided by the acts of living and internal amenities over a street-facing propriety or deference.

The project demonstrates that lateral thinking and borrowing judiciously from other industry sectors can be a valuable tool in delivering innovative, high-amenity and high-quality outcomes.