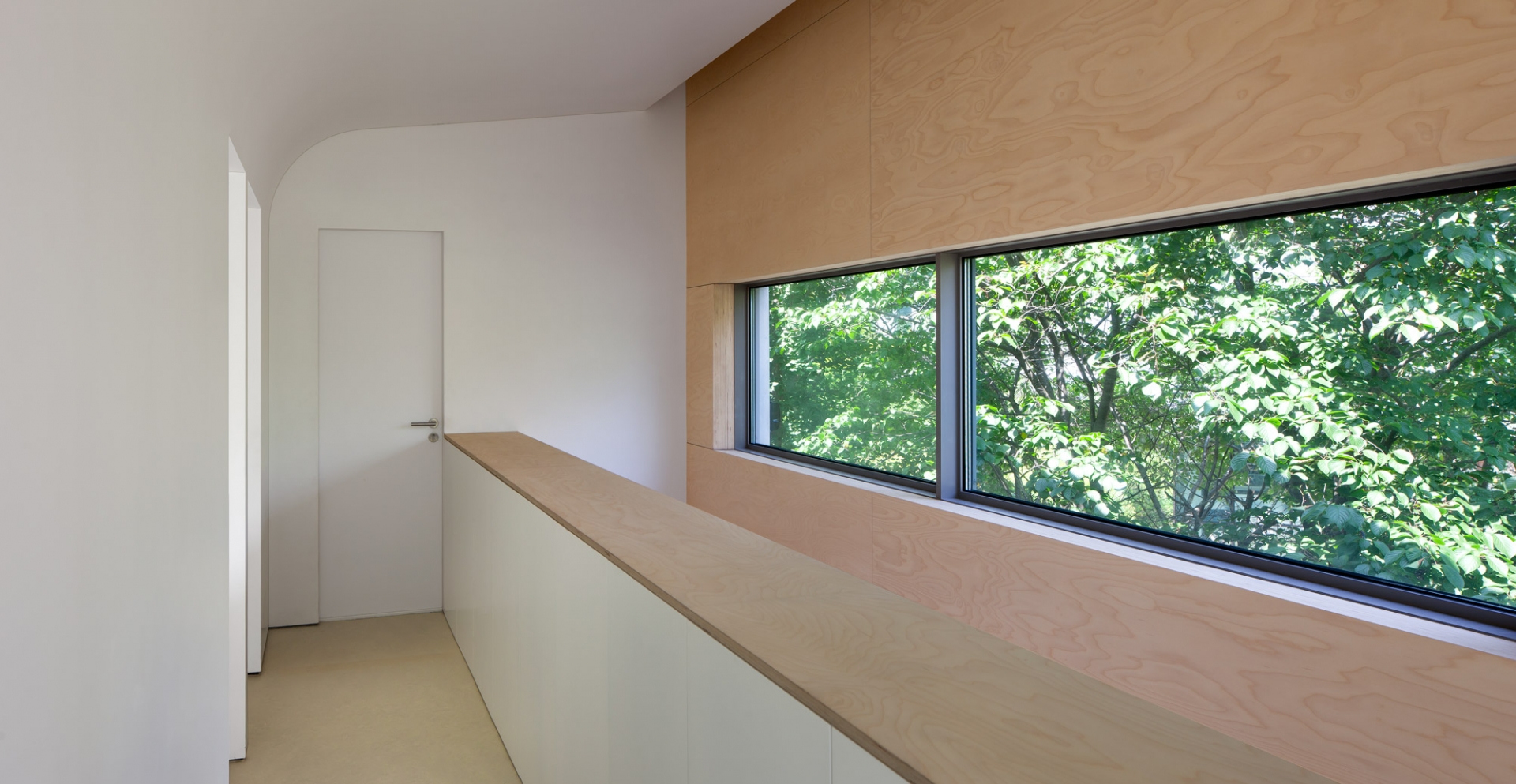 The Scenes that Flood our Lived Experience

DEEP SCAPE is located in Dowon-dong, Dalseogu, Daegu. The neighbourhood is situated in the Daegok district on the outskirts of the city, repurposed for housing in the 2000s. The district unit planning zone has given rise to an area that is well serviced by infrastructure, unlike other neighbourhoods in the city. Daegok neighbourhood is populated primarily by apartment blocks and partially occupied by an area of dense three-floor mixed commerce-residential facilities.

The site lies adjacent to a 8m-wide road to the south and faces the Korea Land and Housing Corporation (LH) to the north. The client, who had closely followed the work of our firm, procured this long unoccupied site and invited us to undertake the design of a housing and commerce mixed-use project. They wanted to generate revenue by renting out a 26m2 commercial space, and also required a residential space for a family composed of a couple and their children, currently at university. They also mentioned that the client’s mother would come to live with them at some point in the future. 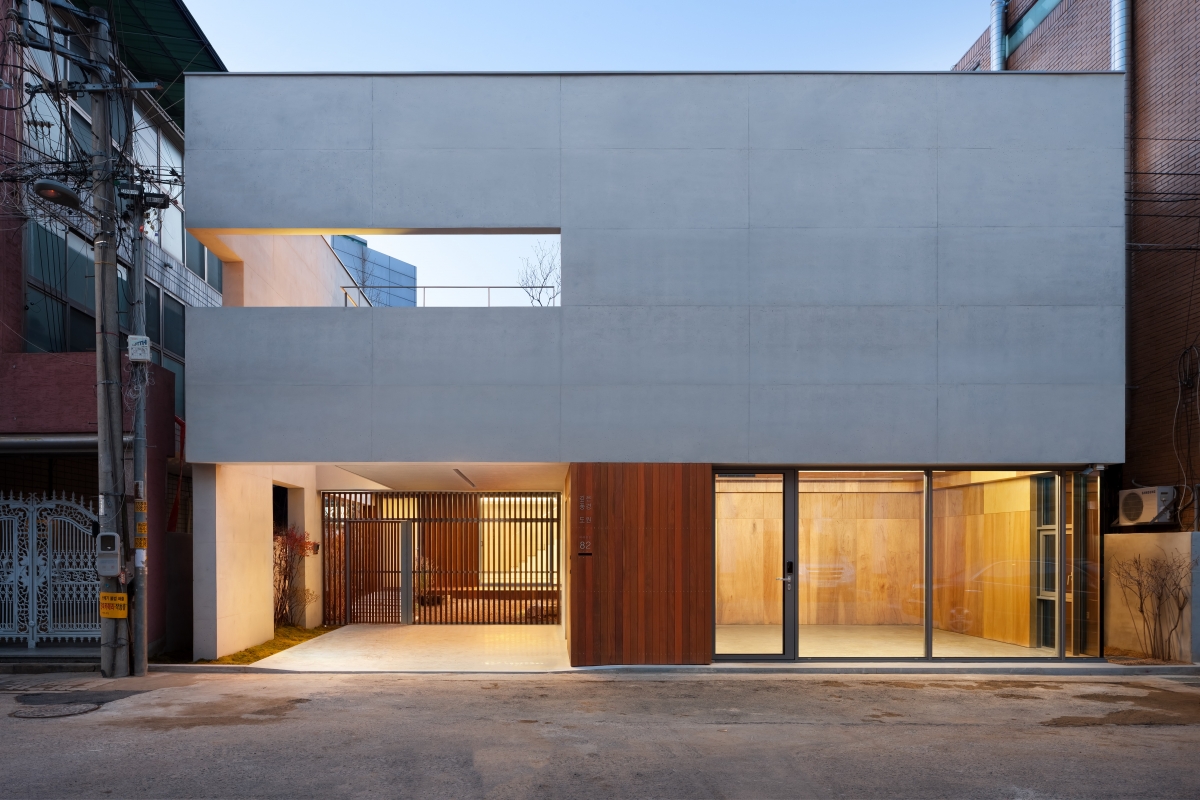 A Controlled yet Expansive Space

The site is encased with a wall at its borders, while its centre has been emptied in response to the prominence of the surroundings. This external boundary was intended as a means of protecting the residential quarters, rather than a defining feature or first impression of the project, and as such it was designed to adopt an unassuming look. The first-floor store, assigned according to the client’s wishes, was equipped with large, open windows, illuminating the surrounding neighbourhood after dusk as a built-in deterrent to burglers.

I hoped that the house would be replete with diverse scenes. Scenery in this context denotes the spatial experience formed through intuitive responses to views of the garden, circulation within spaces and the lines of sight or individual perspectives of the residents, rather than the simple appreciation of a well-kept garden. I also wished to offer the sense that when entering the living quarters and with each step one could become an integral part of these domestic scenes. This was elaborated by establishing immersive spaces and sceneries, by removing the more overt points within the house at which one’s movements and looks were destined to land and by extending these points into areas that lay outside the house.

To realise these aims, I first exhaustively eliminated whatever felt superfluous to everyday life or use and simplified or set aside any complex ornamentation. Careful control of the extent of detailing or types of finishing materials introduced an uninterrupted spatial and scenic experience. The overall approach to materiality in the project was based on a choice to prioritise natural rather than artificially manufactured materials, and the decision to use exposed concrete and decking would encourage traces of its history to emerge over time. 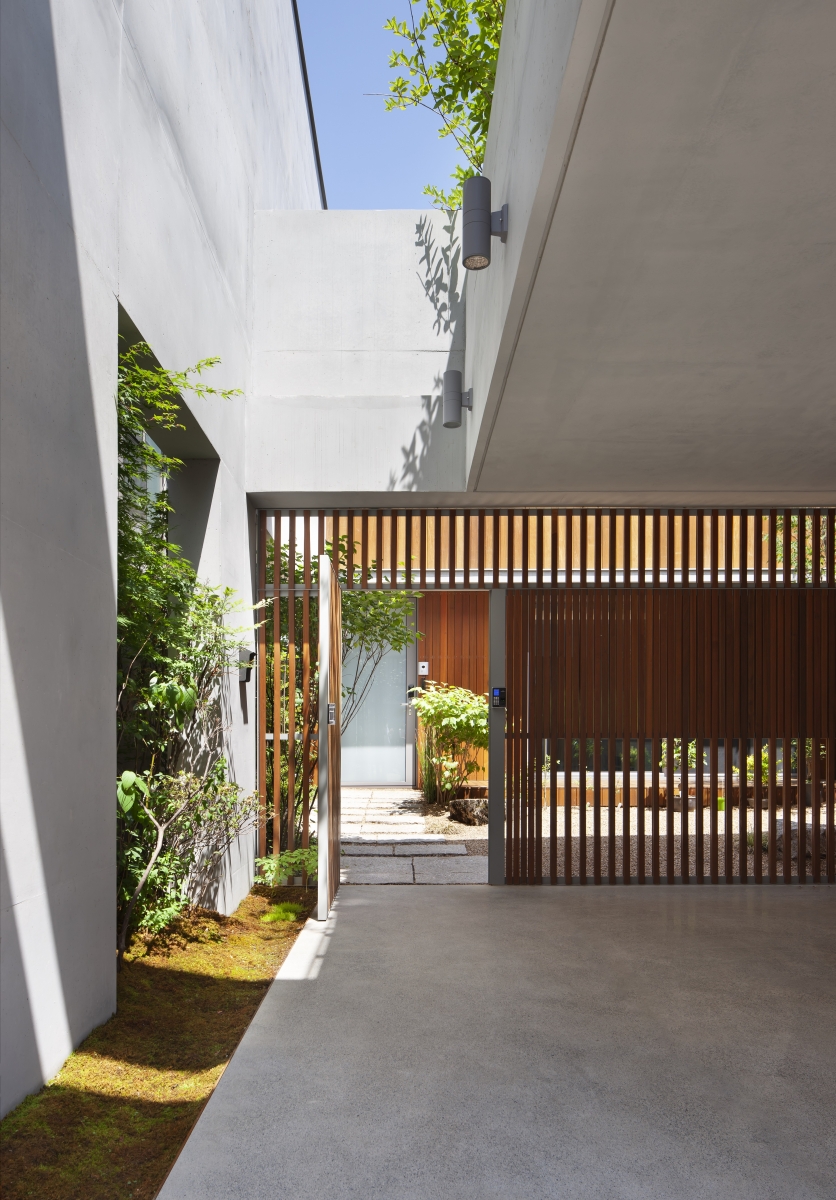 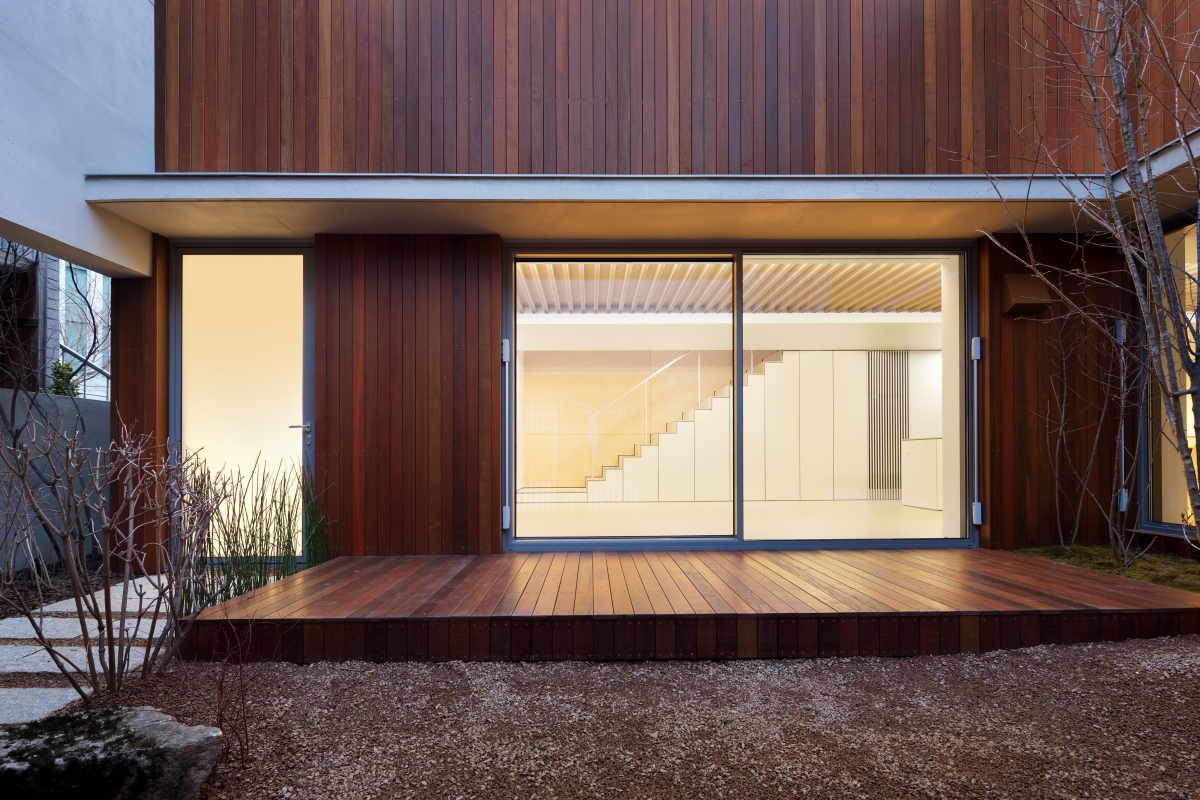 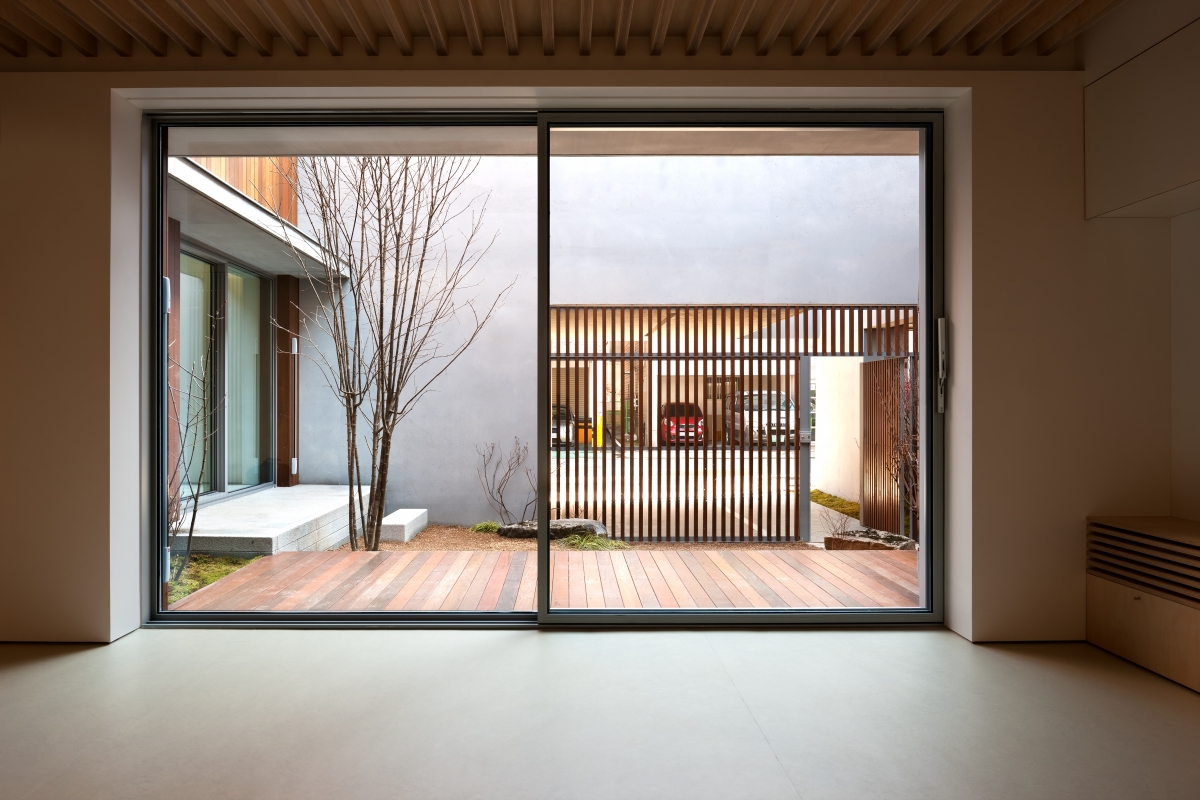 Emptying Out the Interior and Replenishing the Exterior

Shared living spaces for the family, such as the living room and dining room were arranged to the north, surrounding a central first-floor courtyard. Slightly elevating the ground from the southern frontal road helped to offer a sense of security to the residents. The first-floor bathroom and study were arranged adjacent to the dining room, with the study elevated by approximately 20cm from the ground level in the living and dining room to emphasise the independence of this space. A terrace with a wood and stone finish was installed on the boundary between the study and inner courtyard, to connect the inside and the outside (the inner courtyard) in a more intimate manner. This study will eventually accommodate the client’s mother.

The second floor is made up of three bedrooms for the clients and their children and a utility space. The line of movement from the bedroom extends along a view into the inner courtyard, with a further two smaller gardens positioned according to the line of sight and circulation of the residents. First, a garden was introduced at the bottom of the stairs leading to the second floor. Located at the end of the corridor, connecting the stairs and the two bedrooms, this garden intends to create a sense of protected expansiveness, encouraging residents to absorb the scenes of the garden outdoors when mounting the stairs or strolling down the corridor. The other external garden was inserted close to the clients’ bedroom as a space composed just for clients.

The project’s controlled and emptied out interior and exterior spaces are replenished in accordance with the outdoor spaces and landscaping. Therefore, the idea was to empty the interior and to replenish exterior spaces. The external spaces of DEEP SCAPE are not limited to the site boundaries, but rather continue and extend outwards towards the open spaces of the adjacent LH office, and further yet into the forests that surround Daegok district. As a result of the collaboration with a landscape architect, seemingly wild, curling and twisted trees have been chosen over the straighter, more upright trees typical of a nursery. I am reminded of the words of the landscape architect, who empathised with all of our intentions: ‘I filled the outdoor spaces hoping they would resemble a forest colonised by trees growing in the spirit of free competition’. ​ 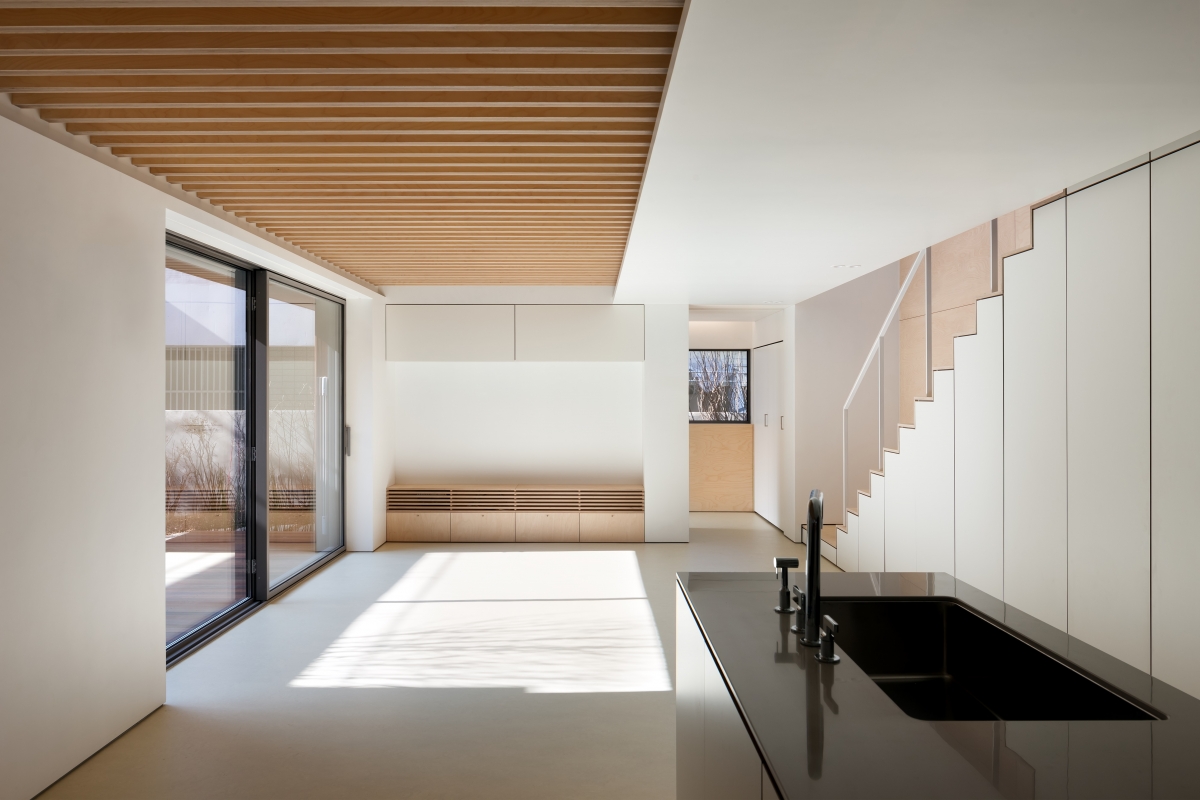 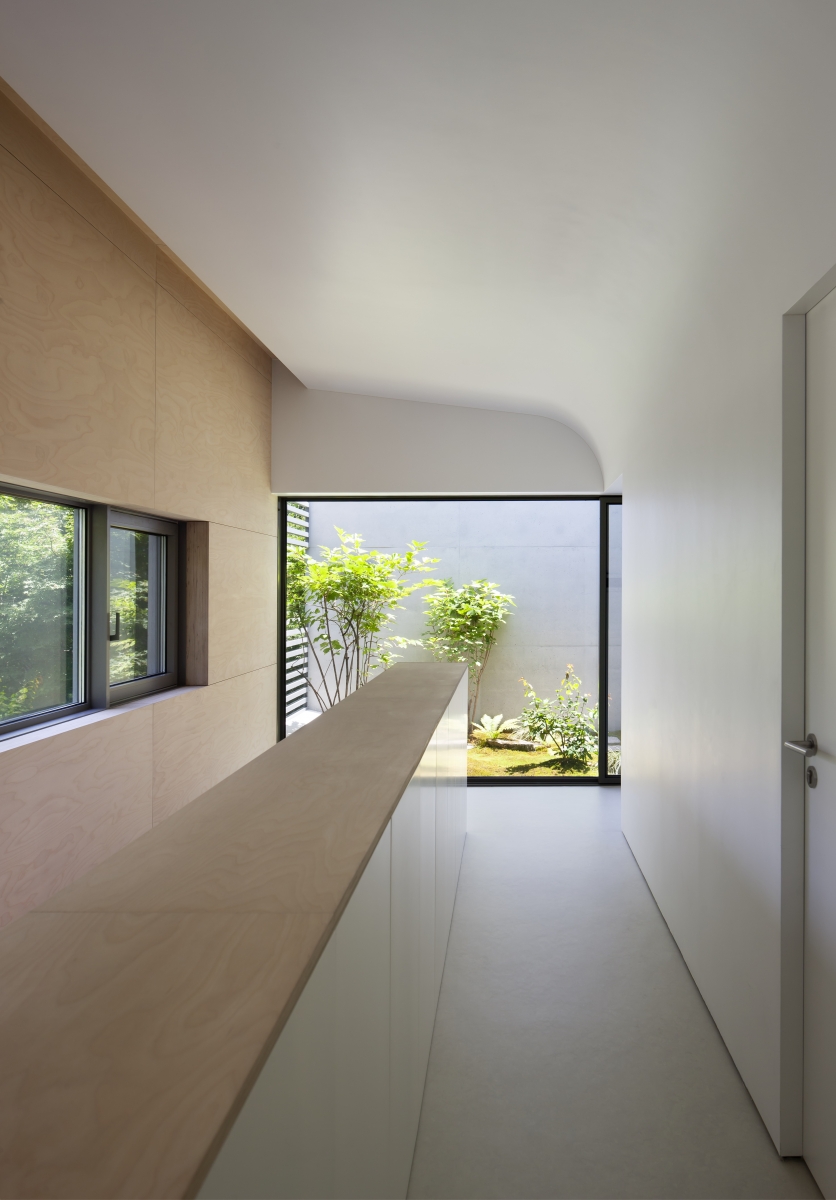 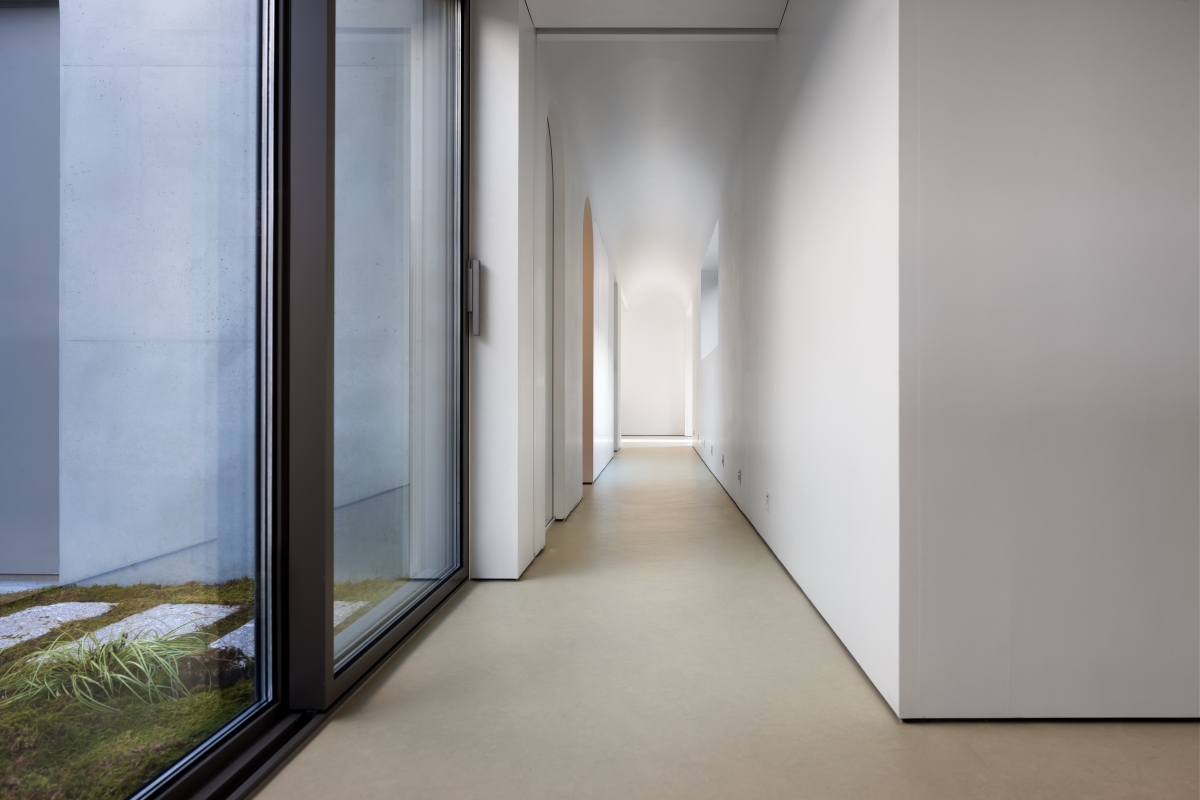 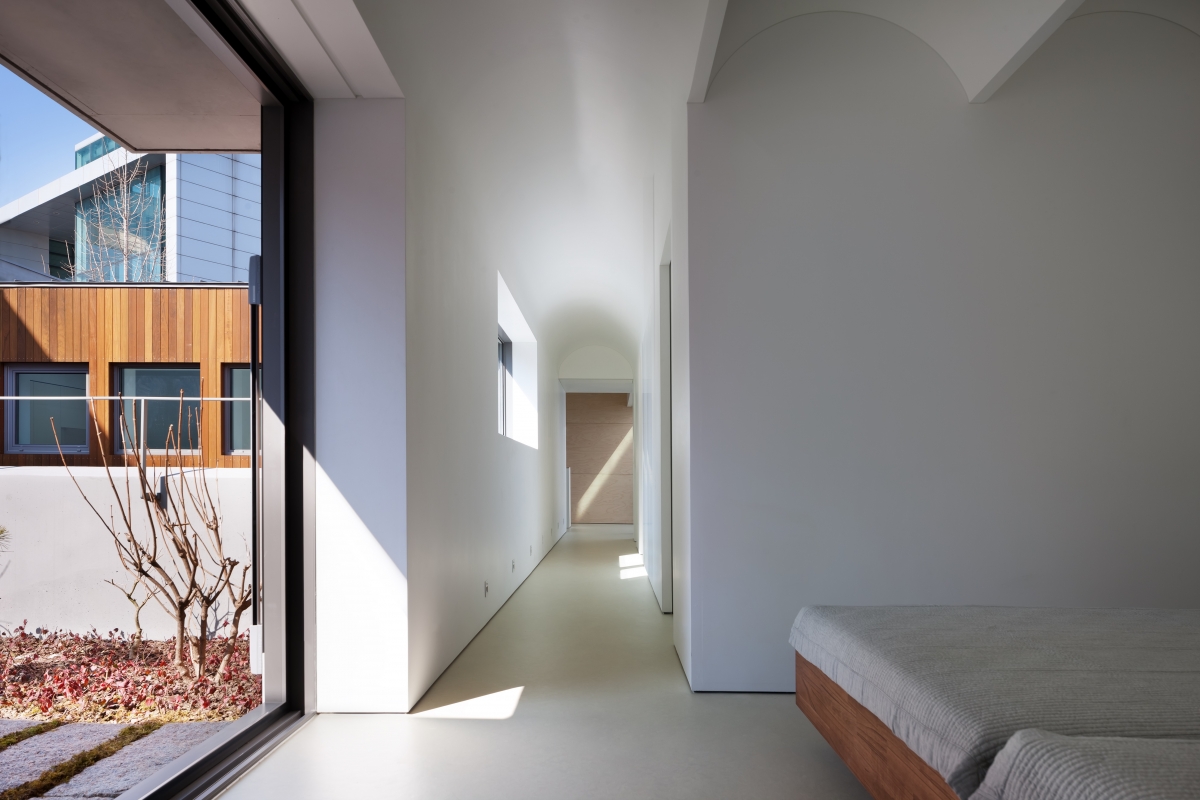 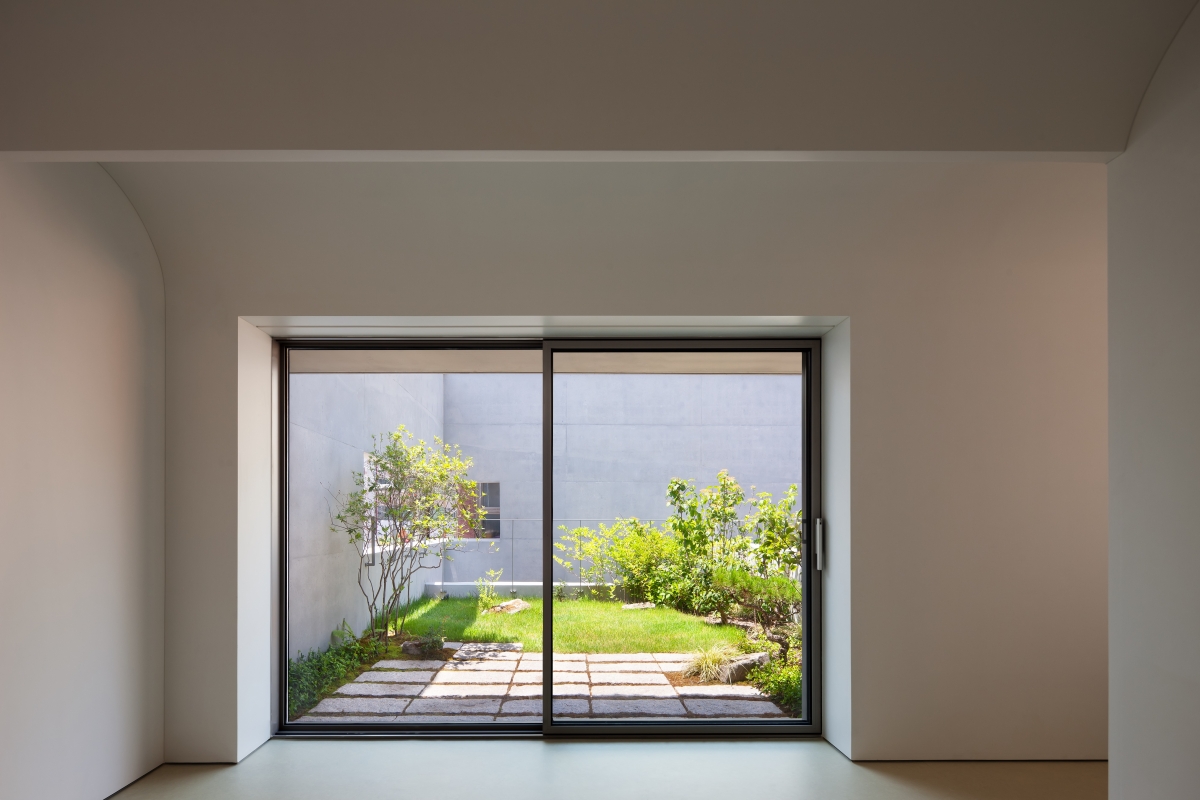