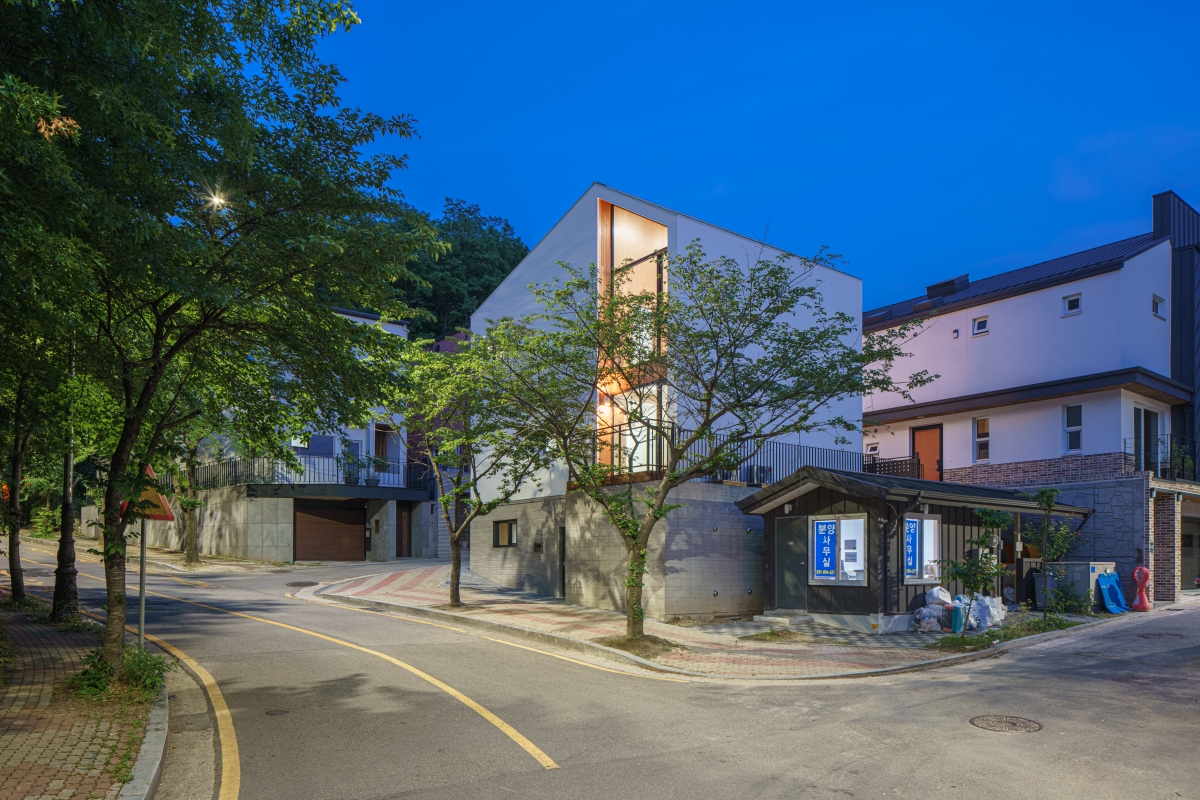 Yongin Jukjeon House is located on a housing estate in Jukjeon-dong, Suji-gu, Yongin-si, Gyeonggi-do. It is located at the entrance to the residential district. The plot, apart from the access route to the south, runs adjacent to roads and pedestrian pathways, and there is a gentle incline from the entrance towards the inner part of the complex. Compared to the other plots the strip of land is relatively narrow, and use of the lower floor is limited as it runs alongside pedestrian thoroughfares and a real estate office.

When it came to ascertaining the building mass, a simple form that would also meet with the district requirements of a sloped roof was proposed and pursued. In addition, due to the characteristics of the plot, an efficient and compact plan was required along with a more innovative approach to space. After a process of configuration, it was decided that the two-story mass should be divided vertically, and each floor should have a common space on one side and a private space on the other. In terms of the common space, an emphasis was placed upon a sense of openness and expandability by inserting a completely open space in the north-south direction. At the same time, light was encouraged to penetrate the space from the south as much as possible and the greenery to the north was intended to blend in as a scene. As it is a small house on a small plot, the design was intended to be diminutive and yet diverse in terms of its spatial experience.

The Yongin Jukjeon House constitutes a basement floor for warehousing and a study, a first floor used by the couple to welcome guests, and a second floor for their children. At the north of the house there is a separate entrance to the basement floor, while the main entrance at the south is connected to the yard outside. When you enter through the main entrance, you face the common space on the first floor, which is a space for family dining and relaxation, as well as a space for communication with guests, where the client seeks a new lifestyle that deviates from their existing one. There is a staircase between the public space on the first floor and the private space that penetrates the house vertically and exposes the natural birch-finish. Occupants use it to ascend to the second floor.

The children wanted their own space, but also wanted to be able to spend time together as a family. The eldest son has his own room, while the middle and the youngest share. There is however, two doors in the middle so that each child could devise an independent space by setting up a wall later. The common space on the second floor is the place in which the children gather and spend time together, which is separate from the common space on the first floor where the adults gather, establishing a buffer zone to minimise mutual interference. It also serves as a living room and as a family room when the whole family comes together. An attic was placed under the sloping roof to function as an independent playroom and as storage space for the children. In addition, a window has been inserted so that this interior space can be seen from the common space on the second floor, allowing the parents to observe and communicate with their children.

The basement wall buried under the slope was divided from the upper reaches by using grey concrete brick as the exterior finishing material. On the first floor, white stucco was used to pursue the visual expansion and simplicity of the building. The large opening to the public space has been finished with red cedar, offering a point in the building that stands in contrast to the simple mass of white and emphasising the dualities between the common space and the private space, which is the main concept behind the design of this house. The interior has been finished with white paint in due consideration of the minimal size of the building and birch wood was again used to finish the walls and ceiling, marking a transition from the outside to the interior. This enhances the unity of the materials used and creates a warm, welcoming atmosphere. 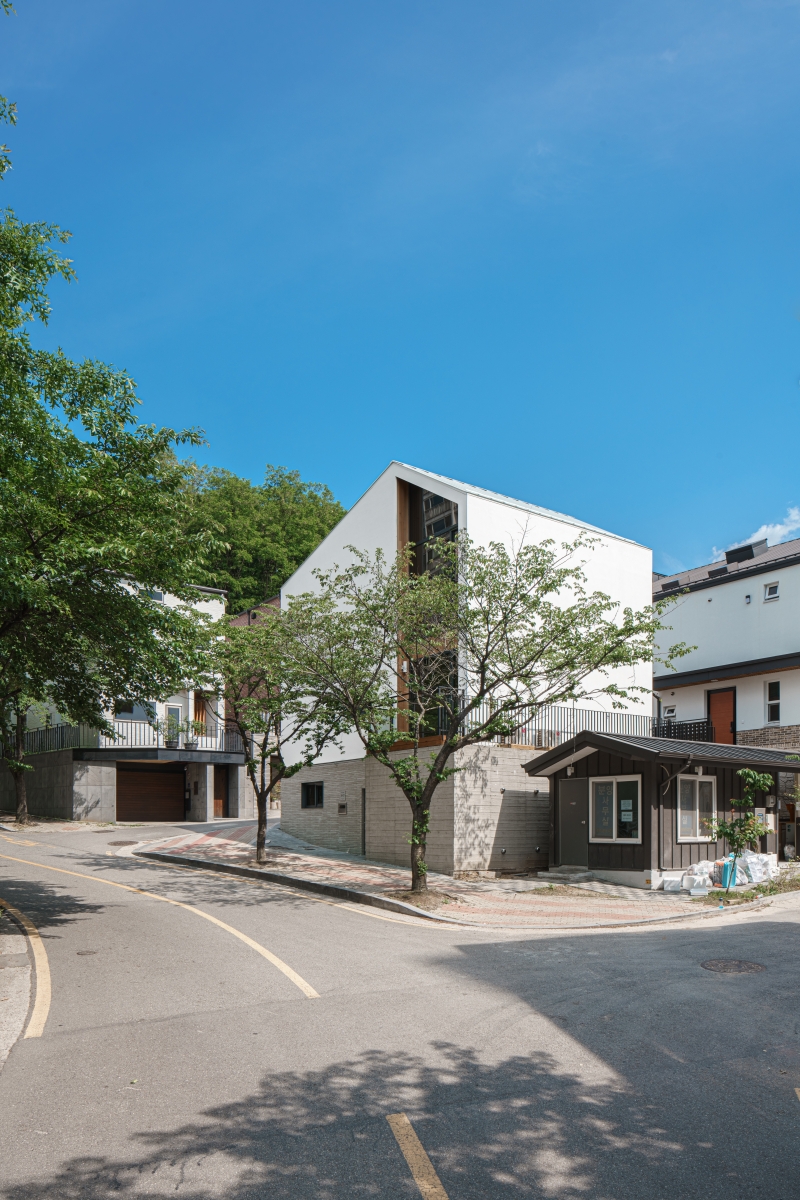 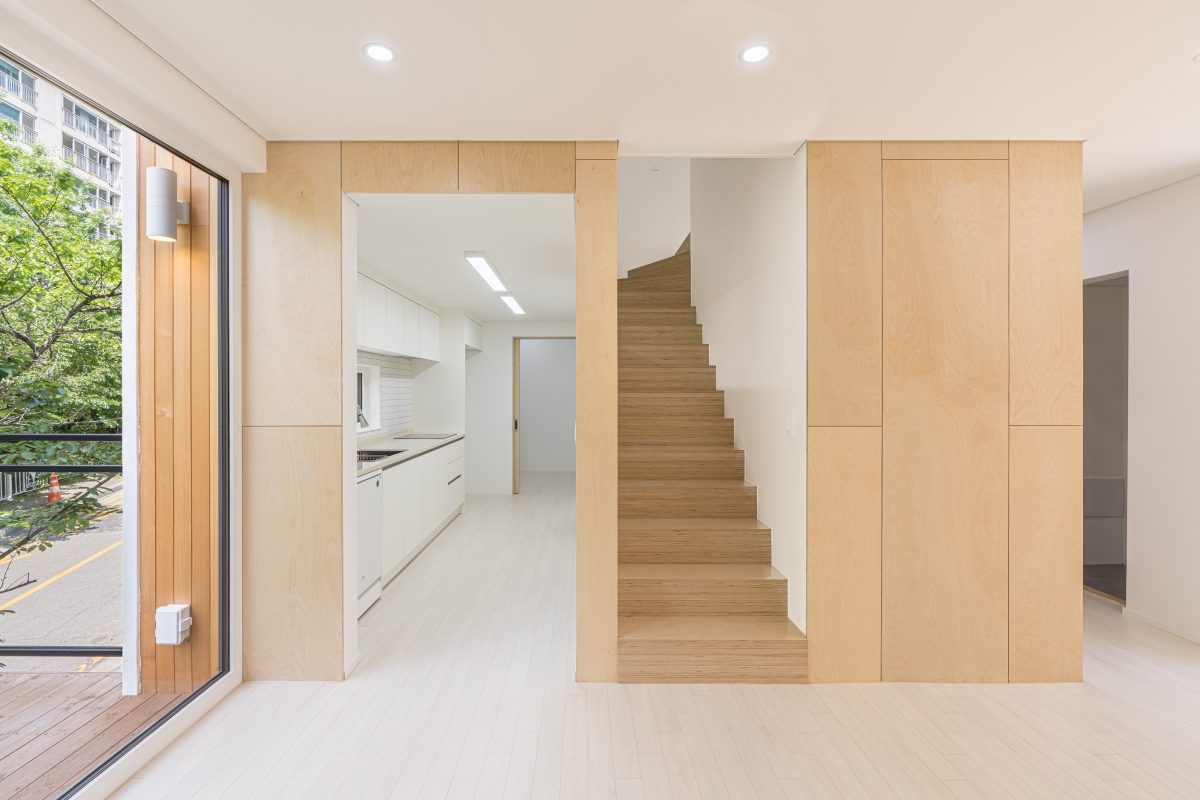 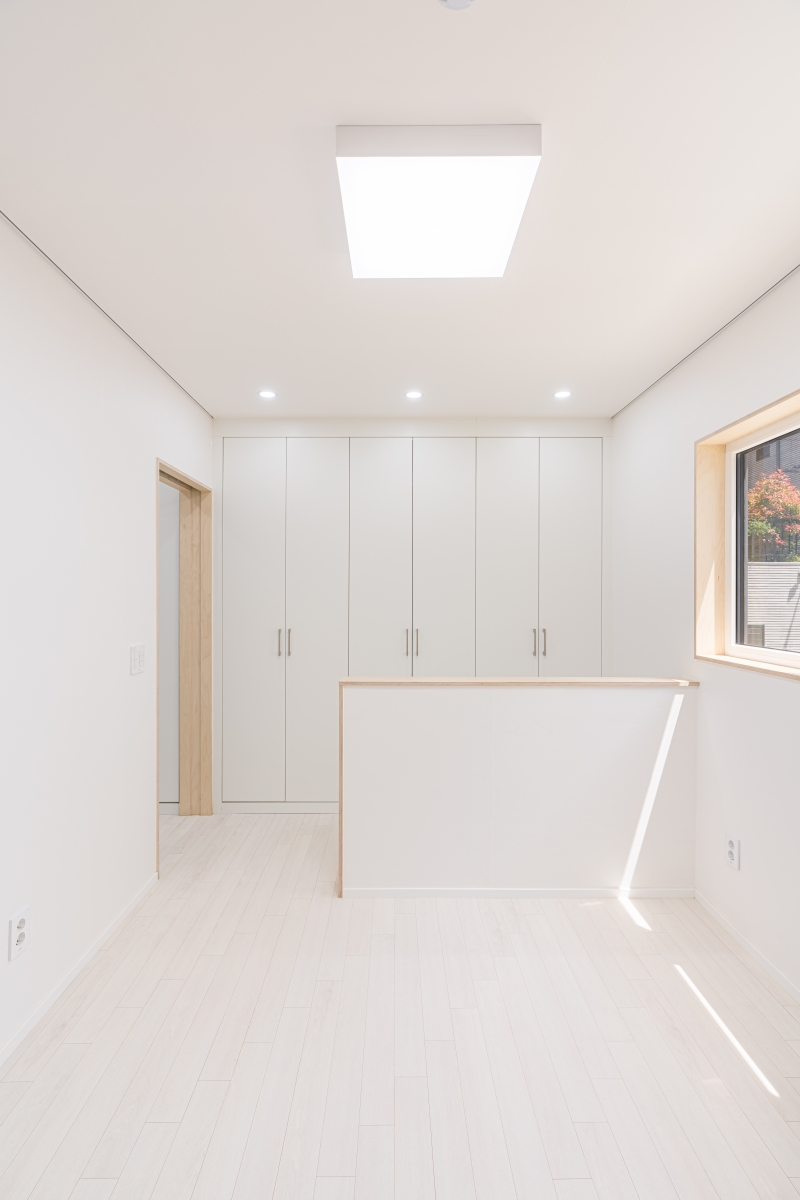 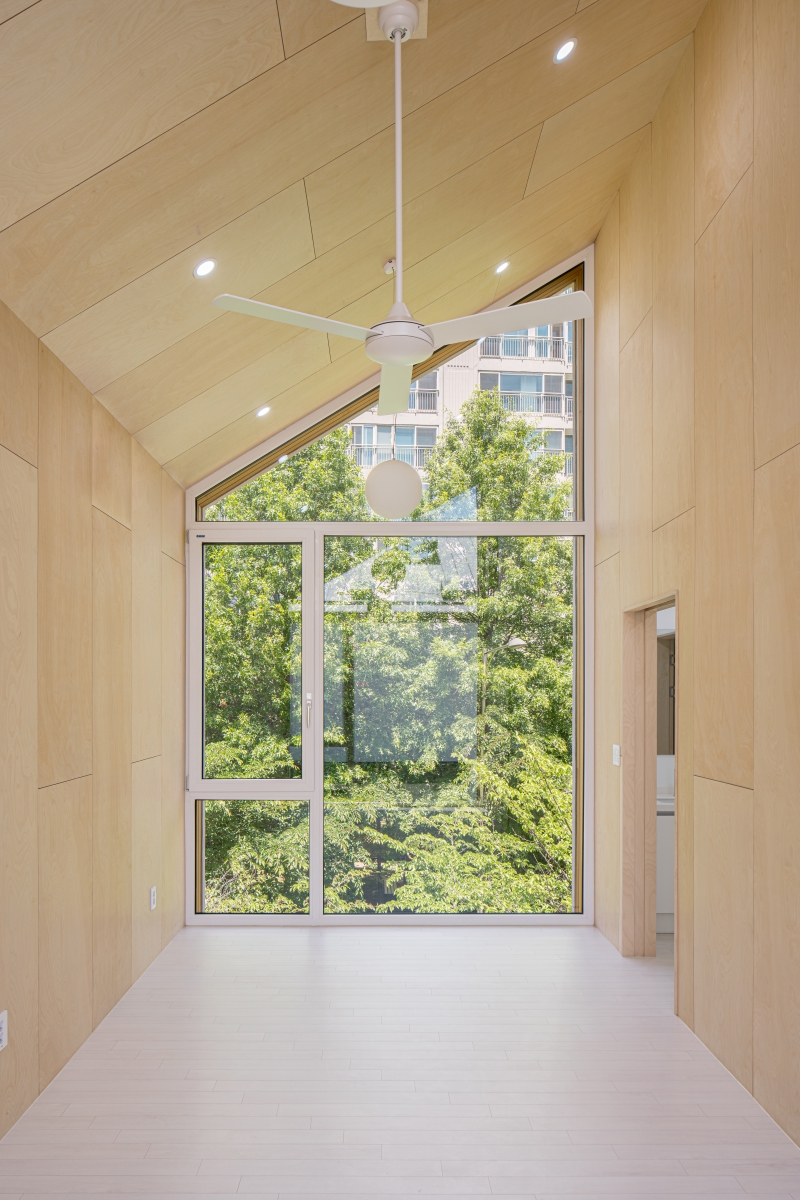 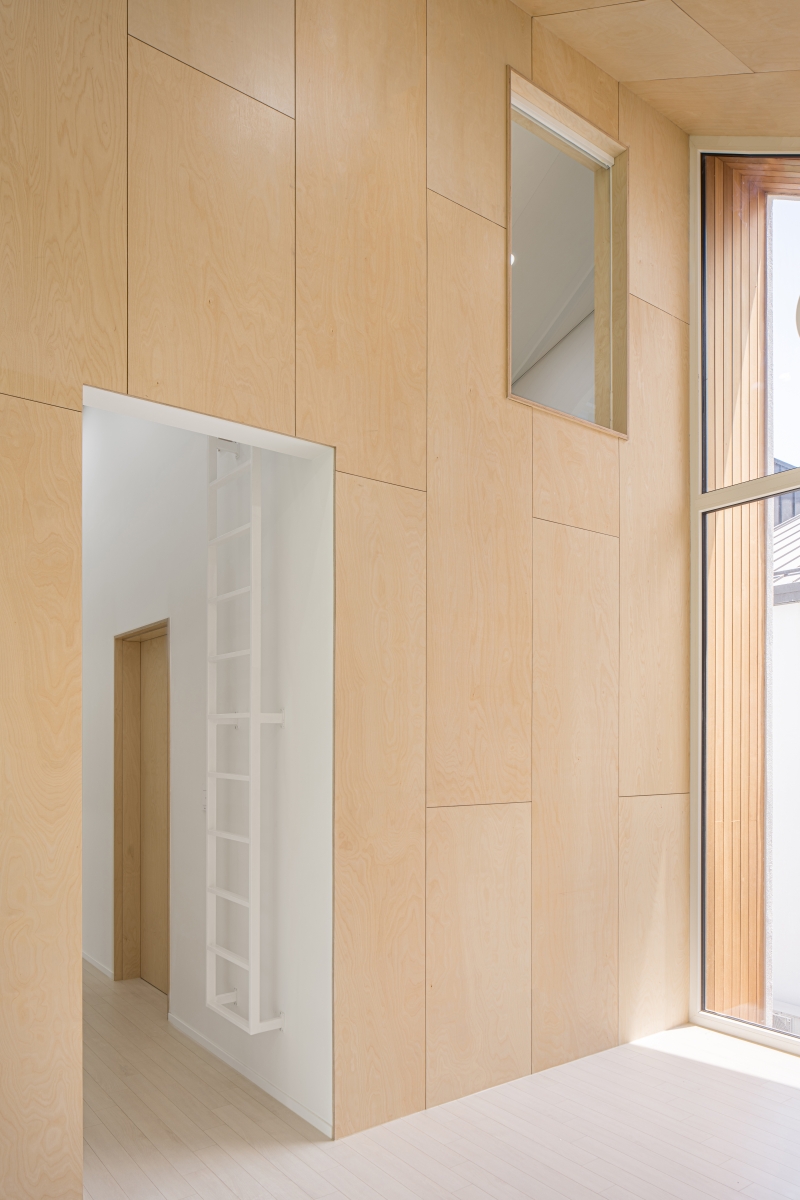 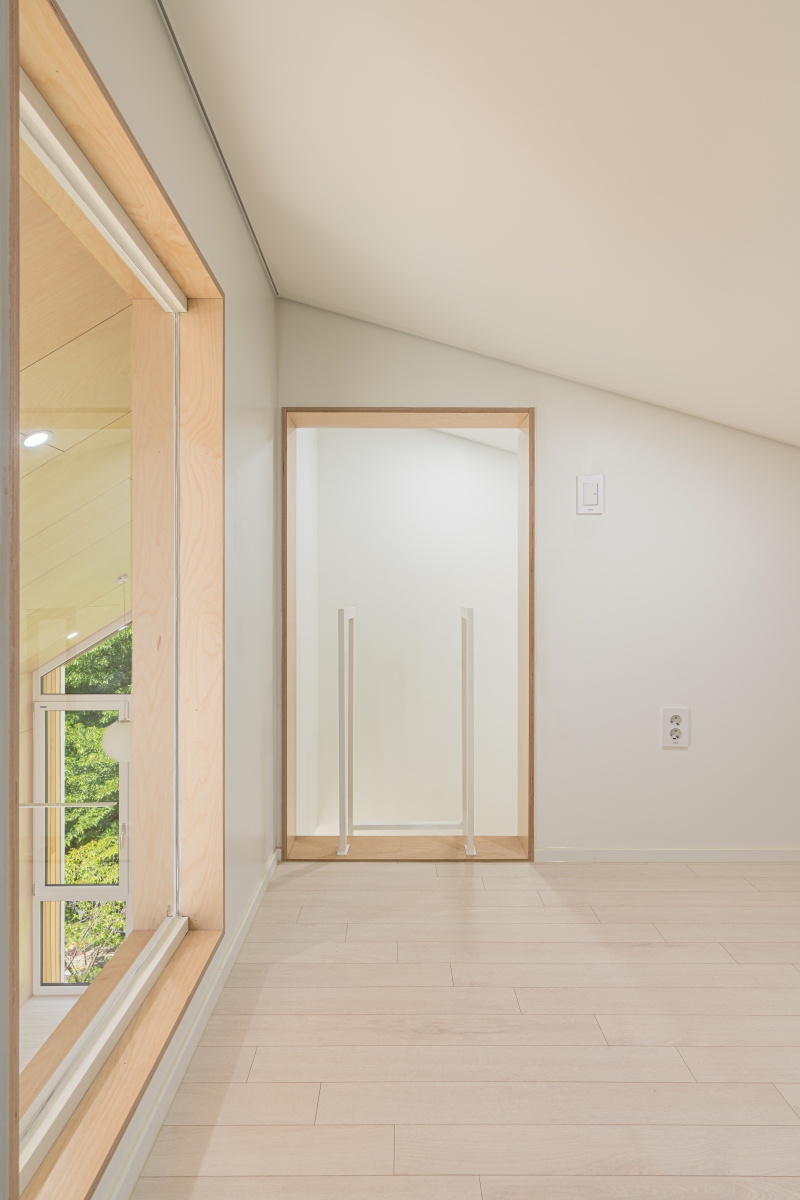 Park Chungwhan, Song Sanghun
Park Chungwhan is a co-principal at Simplex Architecture and a professor at Hongik University. He received his Masters in Architecture from Harvard University in 2011 and holds a Bachelor of Science in Architectural Engineering from Seoul National University. He began his professional career working at Mass Studies in Seoul, where he gained experience through a wide range of projects. He continued his career at Richard Meier & Partners and Asymptote Architecture, leading the design effort on Seamarq Hotel, Vitrvm Residential Towers, and ZIL Tower as a Project Architect. He is a registered architect in New York and a member of the American Institute of Architects as well as a LEED accredited professional, and Public Architect of Seoul Metropolitan Government.

Song Sanghun is a co-principal at Simplex Architecture. He received his Bachelor of Architecture from University of Seoul. He has held primary roles in a wide range of projects including the Pangyo Nature Center, Crystal County Club House and in various firms in Seoul, Korea, as a Project Architect. He is interested in many aspects that form the design field including Urban Design, Architecture, and Landscape Architecture. He is a registered architect in Korea, and a member of the Korea Institute of Registered Architects.