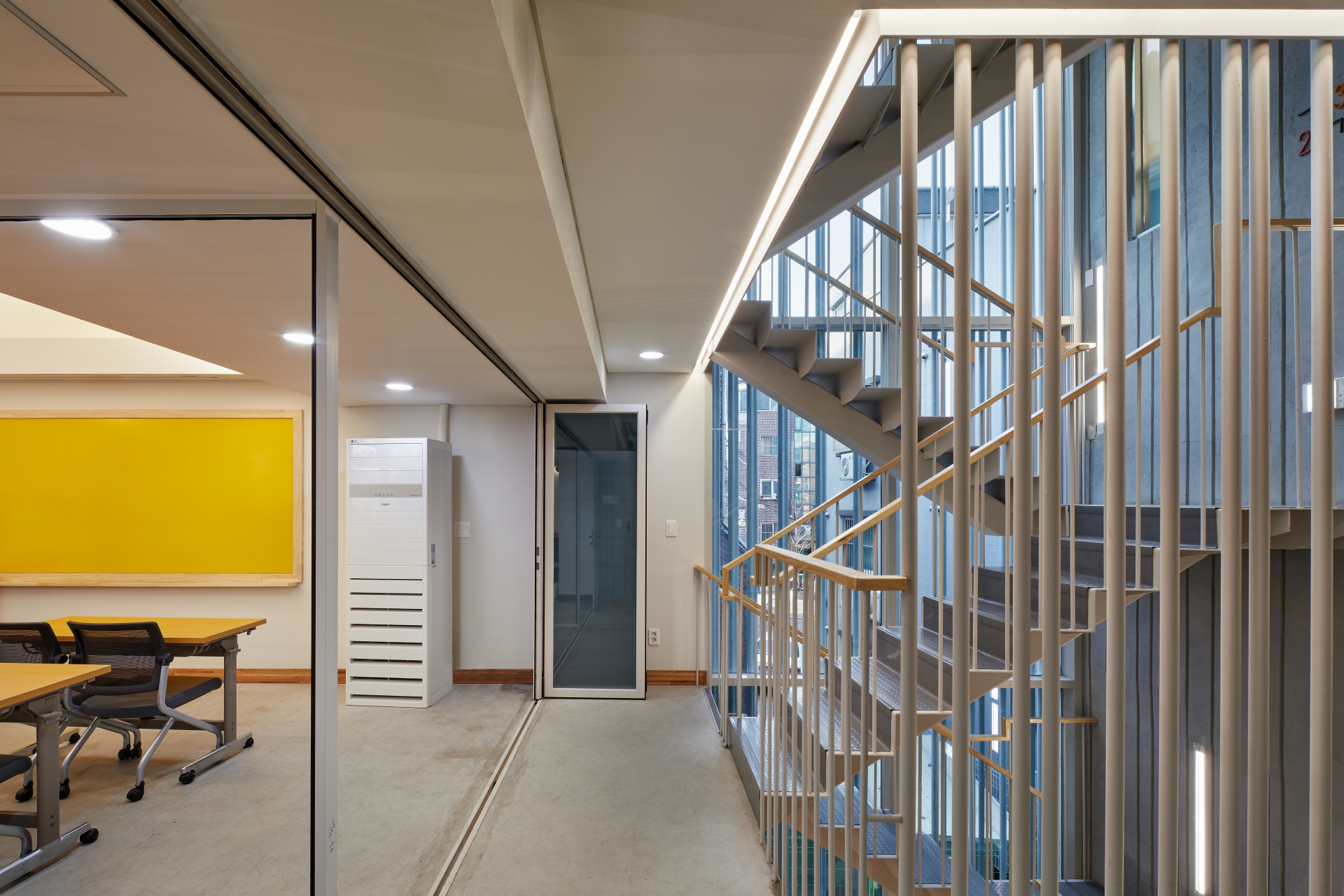 From a Disused Space to a Women’s Shelter

A Confined and Narrow Site

The site was located near the crossroads of Sanggye Elementary School in Nowon-gu. To the south, there is a bustling commercial area facing Sanggye-ro road, whereas to the north there is a residential area in which multi-family houses are concentrated. The area was only 211m2, and an L-shape, where an approximately 4m-wide expanse followed the road to turn inward lengthways for about 13m. The zone that turned inward was surrounded on all sides by five different buildings. In many respects, the site conditions were unfavourable.

When I first visited the site, one that seemed to have been vacant for a long time, there was a temporary building dedicated to sanitation workers to allow to take short breaks. Nowon-gu Office wanted to establish a women’s education centre here, which would focus on enhancing women’s literacy and accommodating various activities for the higher educational community. In order to make this disused space a welcoming shelter for women, it is needed an architectural proposal.

A Diversity of Space Achieved Through Coordination

In many examples of public architecture, projects begin not only by responding to the surrounding environment but also by coordinating with the opinions of residents. This process also guides the design. When the first residents’ briefing session was held on-site, the level of opposition from the neighbouring residents was surprisingly high. This was due to the antipathy felt towards the construction of a new building, on top of prejudice directed towards building facilities for women. To resolve conflict with the residents the project team cooperated closely from the very beginning with the department in charge of the project, and also undertook a process of coordination by remaining in constant communication with the residents. In particular, by maintaining privacy and control of noise levels became crucial requirements, and as a result, the building was planned as inwardly-oriented. Nevertheless, numerous windows have been carefully placed in consideration of the lines of sight and heights of the adjacent buildings to secure sufficient light and views. Furthermore, vertical louvers were installed at the main entrance and the staircase, to not only control the light and block the sightlines but also to create a layered sense of space. In this way, diversity and depth of space were added during the process of coordination with the wider surroundings.

An Elevated Mass with a Plain but Delicate Exterior

On the site, the narrow and long entrance became a threshold in which to form a transitional space from the outside to the inside. First, the building’s mass was lifted upward to protrude towards the road, highlighting the building’s sense of presence. The entry space below the floating volume was planned as a semi-outdoor space surrounded by circular louvers. This design, throughout, prioritises various spaces that can be used flexibly for meetings and exhibitions, welcoming visitors and freeing up access. The elevated mass is supported by slender, circular steel pipes (50mm, 75mm, 115mm) that are placed by 300mm apart. Moreover, the patterns formed by the circular steel pipes were also placed on the concrete exterior walls so that the building expresses its own structural character on a crowded site, one that is unpretentious rather than glamorous, not dull but delicate.

The Expansion of Space, a Spatial Sequence

Nowon Women’s Education Center has a total floor area of 398m2. It has lecture rooms and rest areas for sanitation workers on the first basement floor, book cafés and offices on the first floor, lecture rooms on the second and third floors, lunchbox cafés on the fourth floor, and a roof garden. Considering the nature of the rest of the site, it became necessary to insert a number of programmes. It was difficult to achieve an increase in floor height due to the restrictions placed on the architectural slant line for optimal levels of daylight, so if the floor plan was simply designed by placing a core at the centre the interior space may feel closed and constrained. To resolve this issue, the idea of three-dimensional and vertical expansion of space was proposed. First, the location and width of the stairs were changed to provide a three-dimensional and varied various sense of space, and the staircase was designed in a way so that it could be flexibly used for various purposes. Programmes including book cafés, large lecture rooms, and the lunchbox café are not positioned in spaces divided by hallways or partitioned into rooms, but they are connected to the outside, spatially and visually expanding. Circular steel pipes were also actively used. They were used to coordinate the sightline toward the outside and surrounded the stairs, stratifying the space. Moreover, the diameters of the steel pipes were changed to be used throughout the structures, louvers, walls, and lighting fixtures, making them architectural devices that integrate the interior and exterior of the building. The users enter the building through the entrance below the lifted mass, move through the three-dimensional staircase surrounded by louvers, and experience a visual expansion from the hallway, staircase, and to the exterior space beyond. Throughout this spatial sequence, the overall design intends for its occupants to experience an affluent space, so that women will find this place the best possible place for learning, communication, and repose. 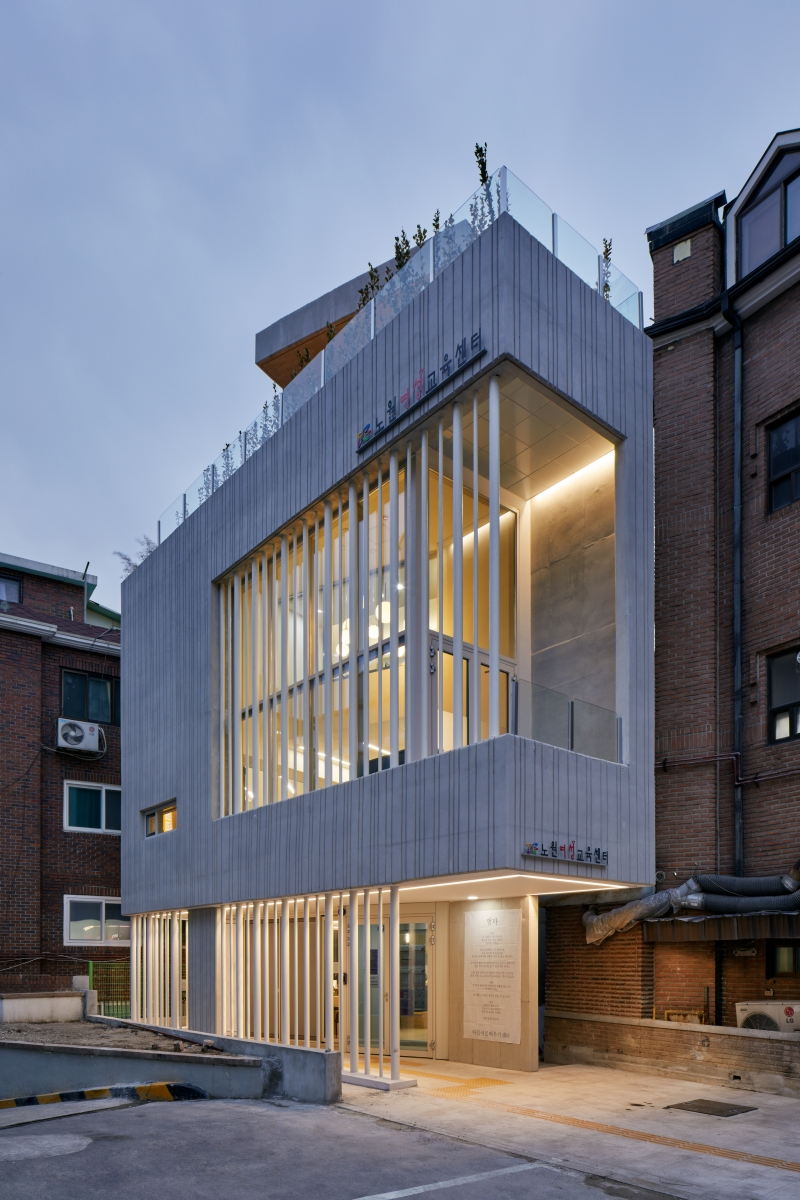 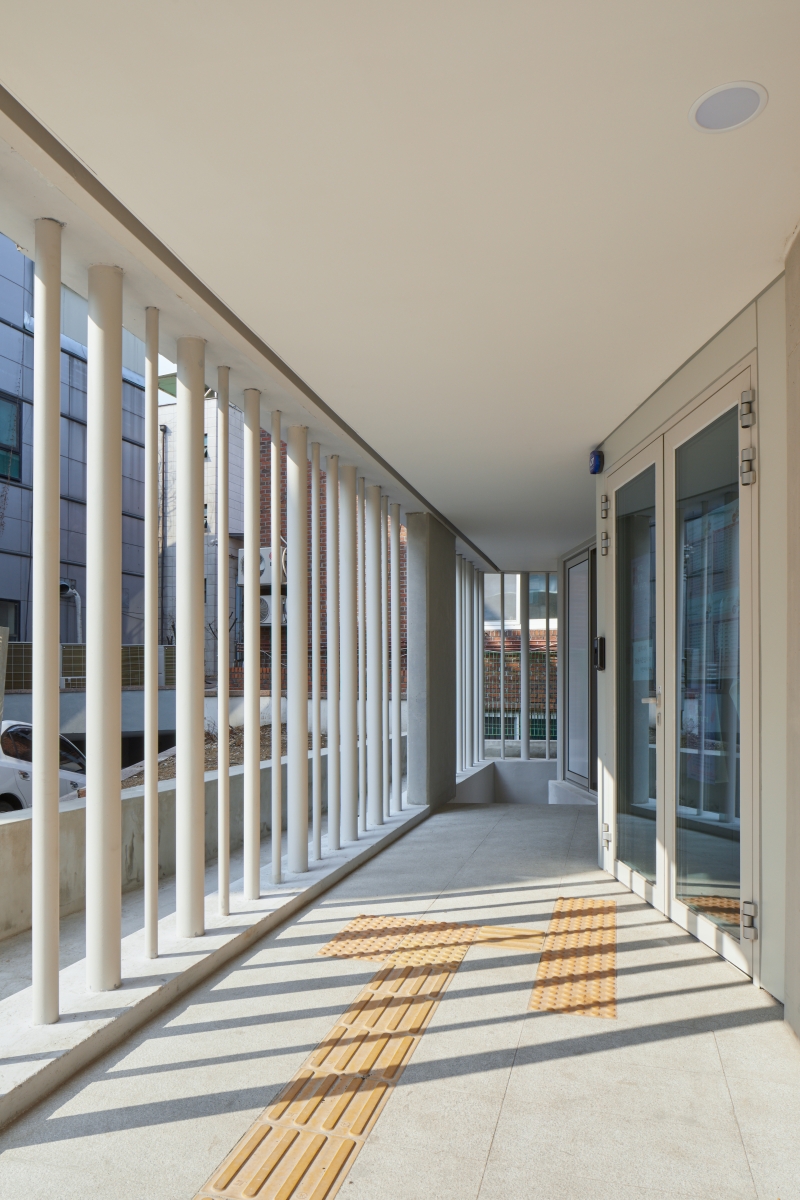 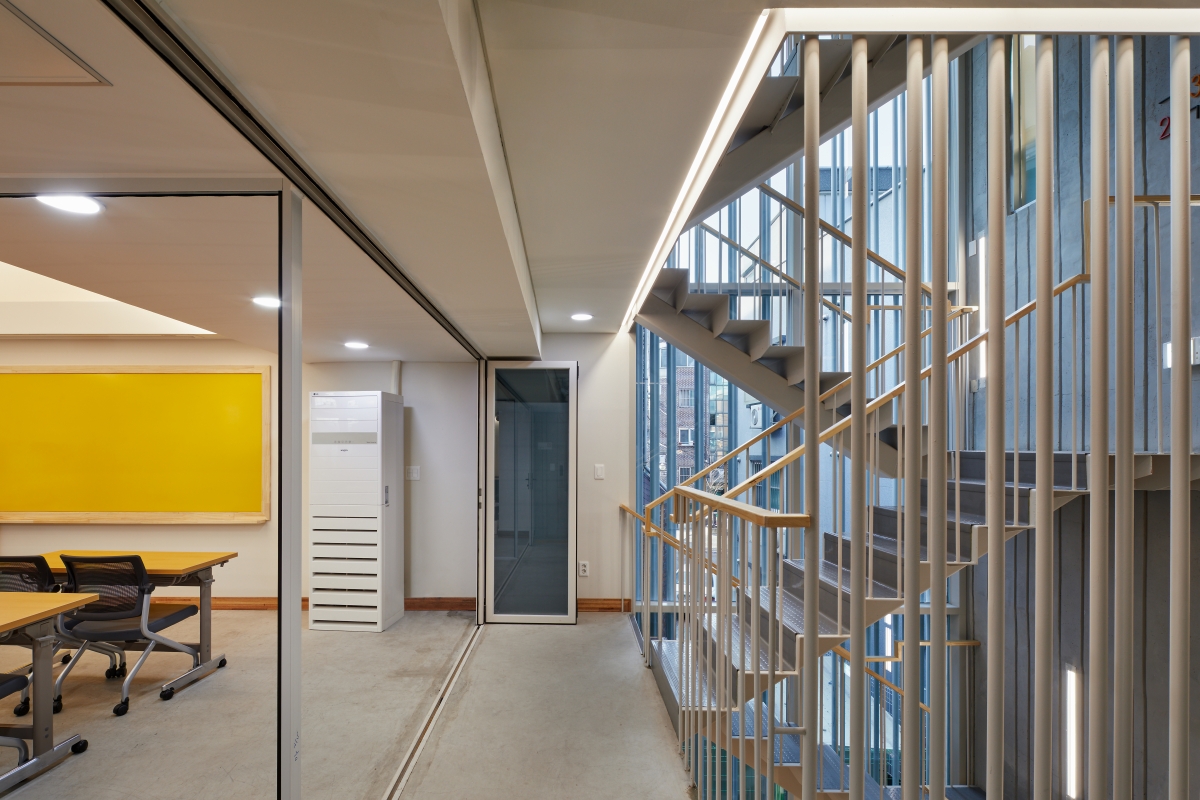 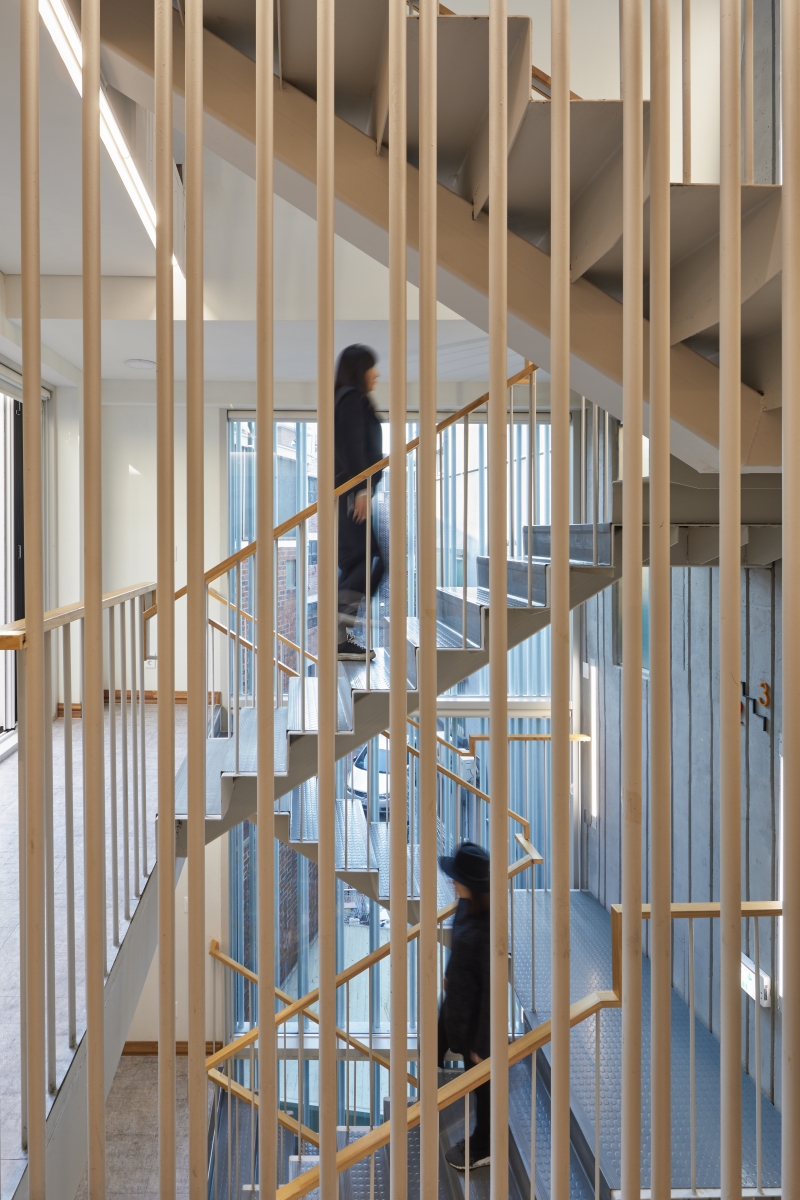 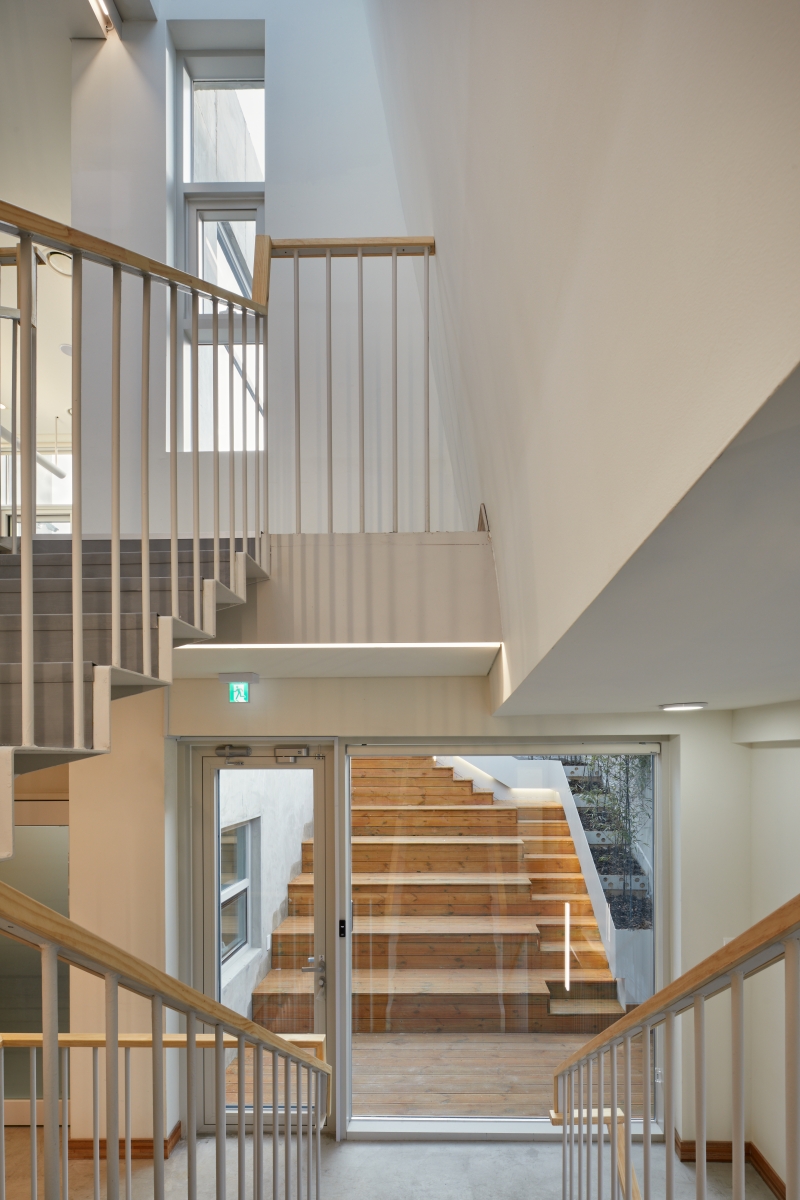 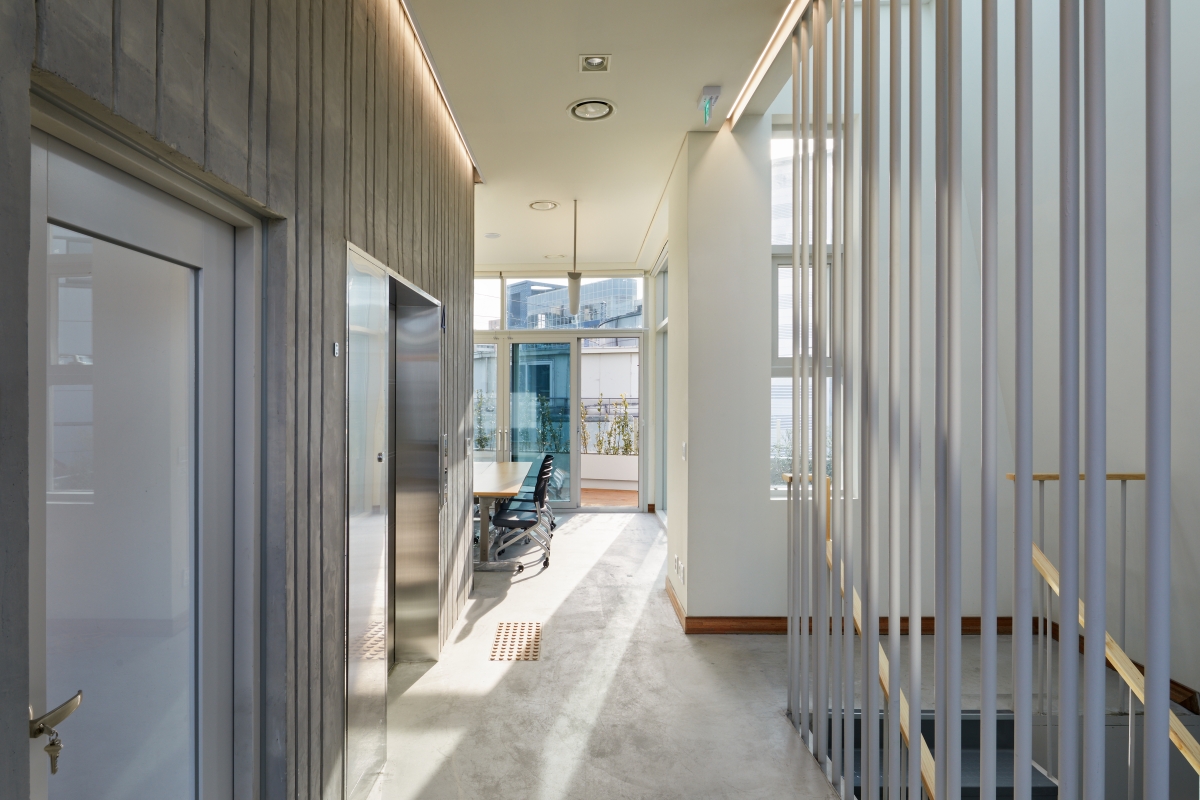 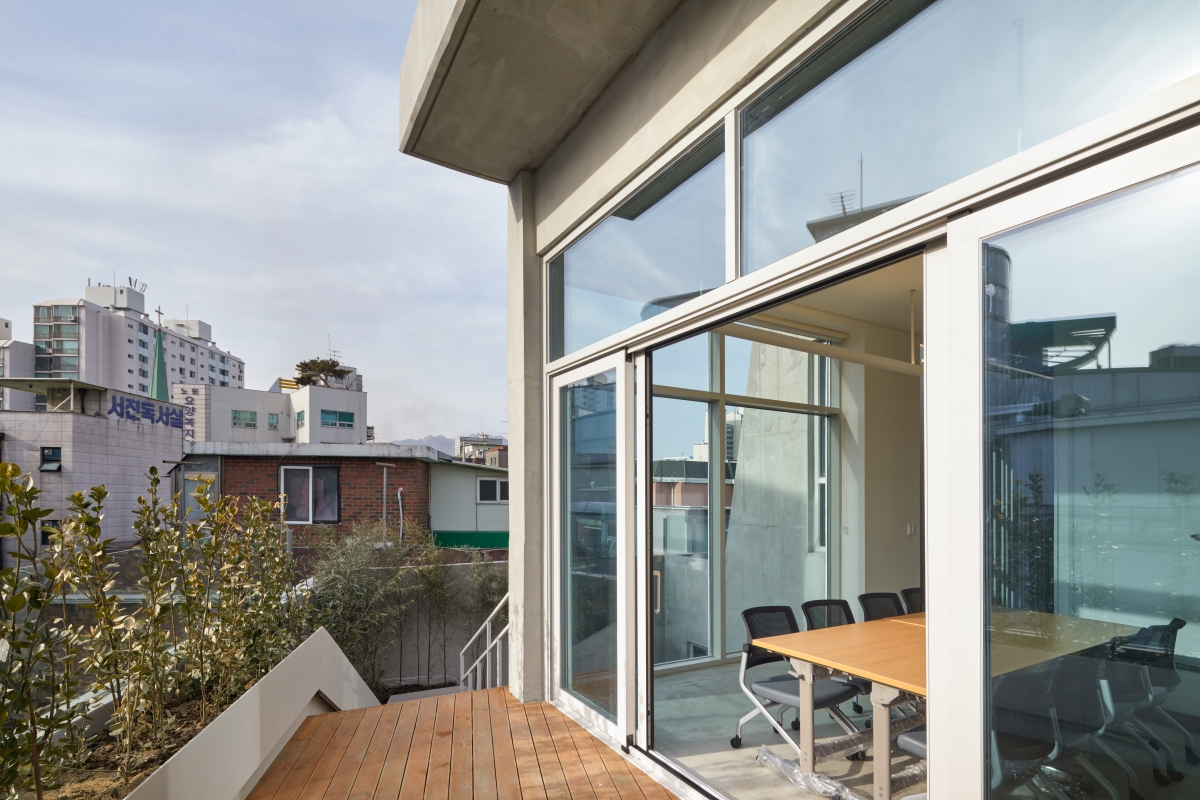 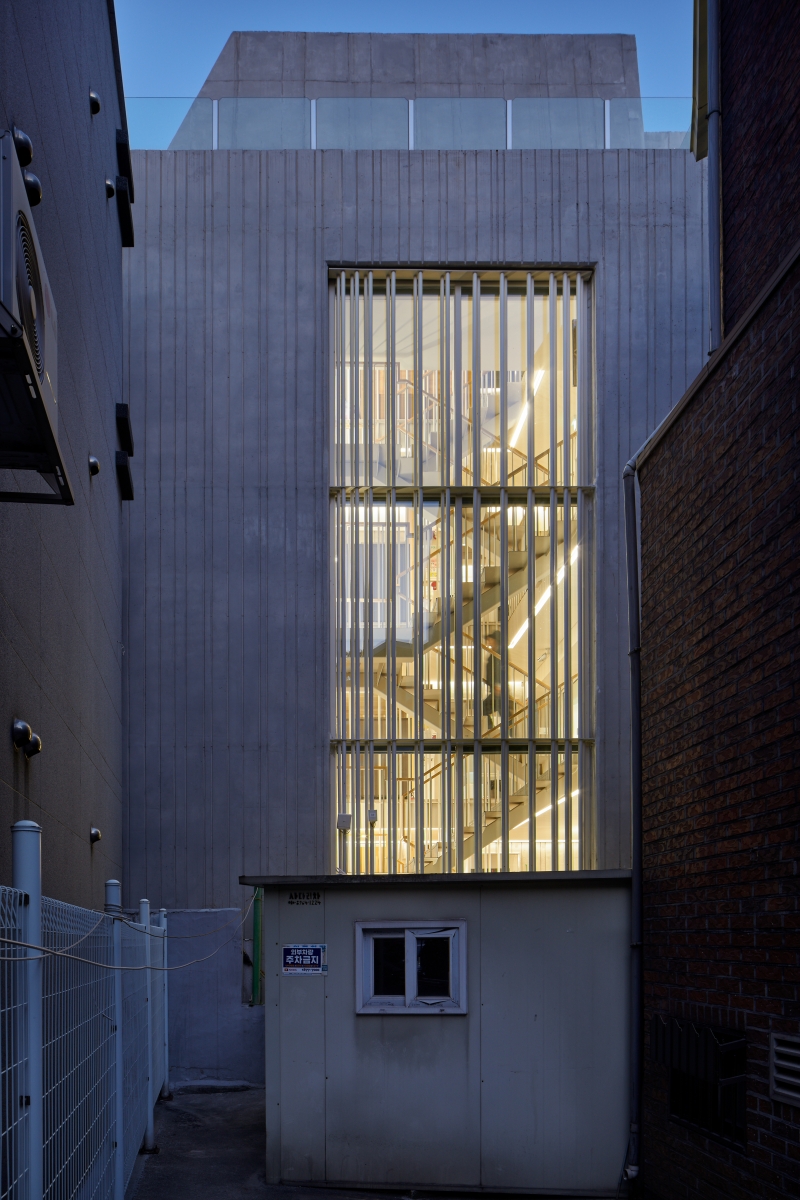 Ko Youngsun
Ko Youngsun is a design principal of TPL Architects and a professor at Hongik University, and is working in diverse fields, architecture, urban, interior, product design, etc. She graduated from Korea University and Yale School of Architecture, and practiced in Polshek Partnership Architects and Michael Fieldman Architects in New York. She is a registered architect in Republic of Korea and in New York State.
No.630 May 2020 architecture Ko Youngsun Nowon-gu women’s education centre disused space circular steel pipe stair staircase sequence
LIST
bookmark_border
favorite_border
9