Dawn of a New Morning 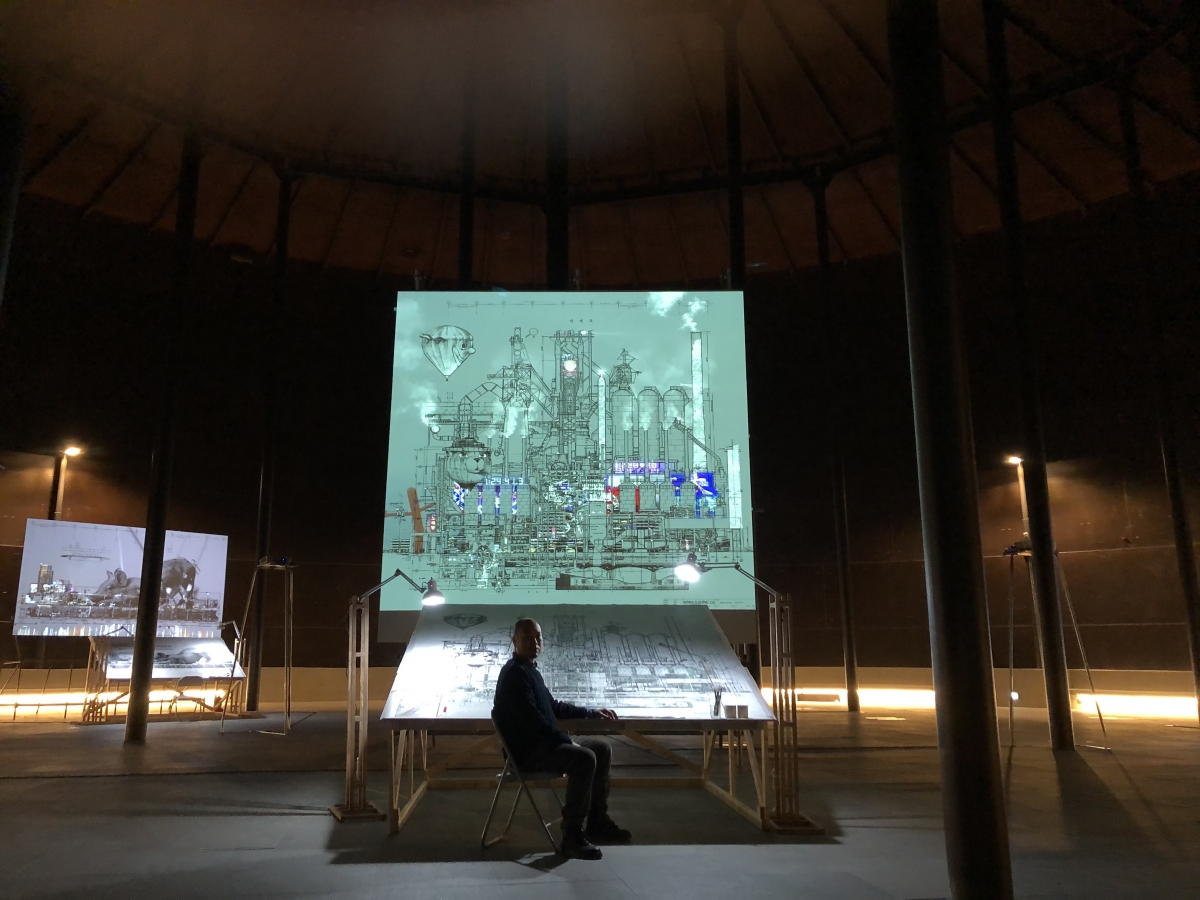 Kwon Minho’s private exhibition titled “The dawn bell rang and the new morning came too” is taking place at the Mapo Oil Tank Culture Park’s T4 Complex Culture Space. Kwon is an artist whose work condenses Korean society into architectural images that revolve around the form and floorplan of industrial facilities built in the 1970~80s. This exhibit is the first of Kwon’s being hosted in two years since his last show, titled “steel. cement. plastic” (2017), took place at the Seoul NPO Center. This time around, his work features various elements that symbolize Korea’s era of industrialization, in addition to buildings.

Five large drawings included in the exhibit illustrate key images that mark important turning points in the history of Korea’s various industries. Some notable ones include the “Atlantic Baron,” which signified the booming of the shipbuilding industry, the “Hyundai Pony,” which was the product of an initiative to create the first domestically produced automobile in the country, and “Pohang Steelworks,” a steel mill whose name is synonymous with the heavy chemicals industry itself. Kwon creates alien landscapes through the juxtaposition of familiar symbols of economic growth with pictures of animals such as a piglet or a hen. This clash of imagery is part an effort to shed light on the political propaganda at the time that emphasized the importance of diligence and capital. This is also apparent in the title of the exhibition, which borrows from the lyrics of the “Saemaeul Song,” the anthem for the political project launched in the 1970s to that end. Unlike his previous shows that called attention to elaborate drawings displayed as single installations, this time his artworks are provided as three-dimensional experiences that amalgamate drawing, lighting, interactive sounds, and new media animations. Media artist Kim Ingeun and interactive designer Lee Jaeok collaborated to transform each drawing into moving images and supplement them with lighting and sound effects that change in response to audience movements.

“The dawn bell rang and the new morning came too” prods at our collective memories of the 1970~80s, a period of great economic growth and industrial reconstruction. It also asks if the same values that proved useful in the past are still relevant to today’s society. This is a question that speaks to the show’s location, the Mapo Oil Tank Culture Park, as well. Once an oil storage facility, the place was closed down for 16 years before the societal movement to remodel industrial heritage sites and reclaim them in the name of citizens prompted its transformation into its current form. There is a certain amount of irony in the fact that a show which harkens back to the golden age of industry is being held in a facility that owes its origins in no small part to the loss of an industrial function. The exhibit, which fuses together its artworks and location’s sense of place, will continue until its closing date, the 16th of February.