Discussing the Prototypinge and Conservation of Ancient Architectural Sites

The Cultural Heritage Administration in the National Research Institute of Cultural Heritage and the Korea Association for Architectural History organised a joint academic seminar under the theme of ‘Directives for Archaeological Research and its Maintenance and Utilisation for Conservation of Ancient Architectural Sites’ at Seoul Museum of History on 25 October. Using the Gyeongju Hwangnyongsa Temple and Iksan Mireuksa Temple as research examples, the seminar aimed at sharing research results and information on the current situation regarding the restoration and maintenance of ancient architectural sites.

Four topic presentations opened the proceedings, regarding restoration and the maintenance of ancient architectural sites. Kim Wangjik (Professor at Myongji University) introduced increased perception towards formless values in recent cultural trends and compared it with the current academic climate, which is still too focused on the evaluation of physical forms. He argued that architectural sites must be expanded in their interpretation of a wider view that encompass various values in order to allow for more productive discussions. Kwon Heungsoon (Researcher at National Research Institute of Cultural Heritage) demonstrated the process involved in realising the inner gate of Gyeongju Hwangnyongsa Temple as an augmented reality experience. By stabilising the compatibility of modeling data, the National Research Institute of Cultural Heritage is preparing the foundations for the inner gate of Hwangnyongsa Temple to be used in various contexts. This was followed by a presentation on current maintenance research for the Mireuksa Temple. In order to secure the time and funds for an in-depth research of the Mireuksa Temple, Jung Jiwon (Researcher at National Research Institute of Cultural Heritage) revealed that he was currently in the process of developing an ‘Open-Air Museum’ that would be reclassified in our era of conservation. Lastly, Lho Kyung-Min (Professor at Korea National University of Cultural Heritage) explained the four historical research themes that have derived from approaching the historical study of Mireuksa’s corridors from multiple angles.

After the presentation, a general discussion led by Jeon Bonghee followed. The discussion was conducted between Goh Juhwan (Principle at Saehan TMC), Kim Sangtae (Professor of Korea National University of Cultural Heritage), Lee Woojong (Professor of Yeungnam University), and Hyun Seungwook (Professor of Kangwon National University) as panelists. The discussion of prototypes is a theme that often appears whenever the conservation of ancient architectural sites is addressed. Hyun Seungwook expressed his concerns about the conservation methods used on the corridors of Mireuksa Temple and criticised the methods as composed of techniques that were selectively chosen from an old historical record ‘youngjobeobshik’ (building method) and applied to respective historical research ideas. In response to this, Loh Kyung-Min contended that these techniques were the most appropriate when considering the currently available foundations and the user’s perspective.

All panelists agreed respectively on the kind of attitude should one have towards conservation and prototyping. Kim Wangjik pointed out that it is impossible to demand a prototype from all architectural sites, and as such one should seek the significance of each example and reflect them in the conservation process. Lee Woojong said that there is also a need to direct the principles that cater specifically to the masses, as the number of visitors has become an important index for the successful conservation of ancient architectural sites. 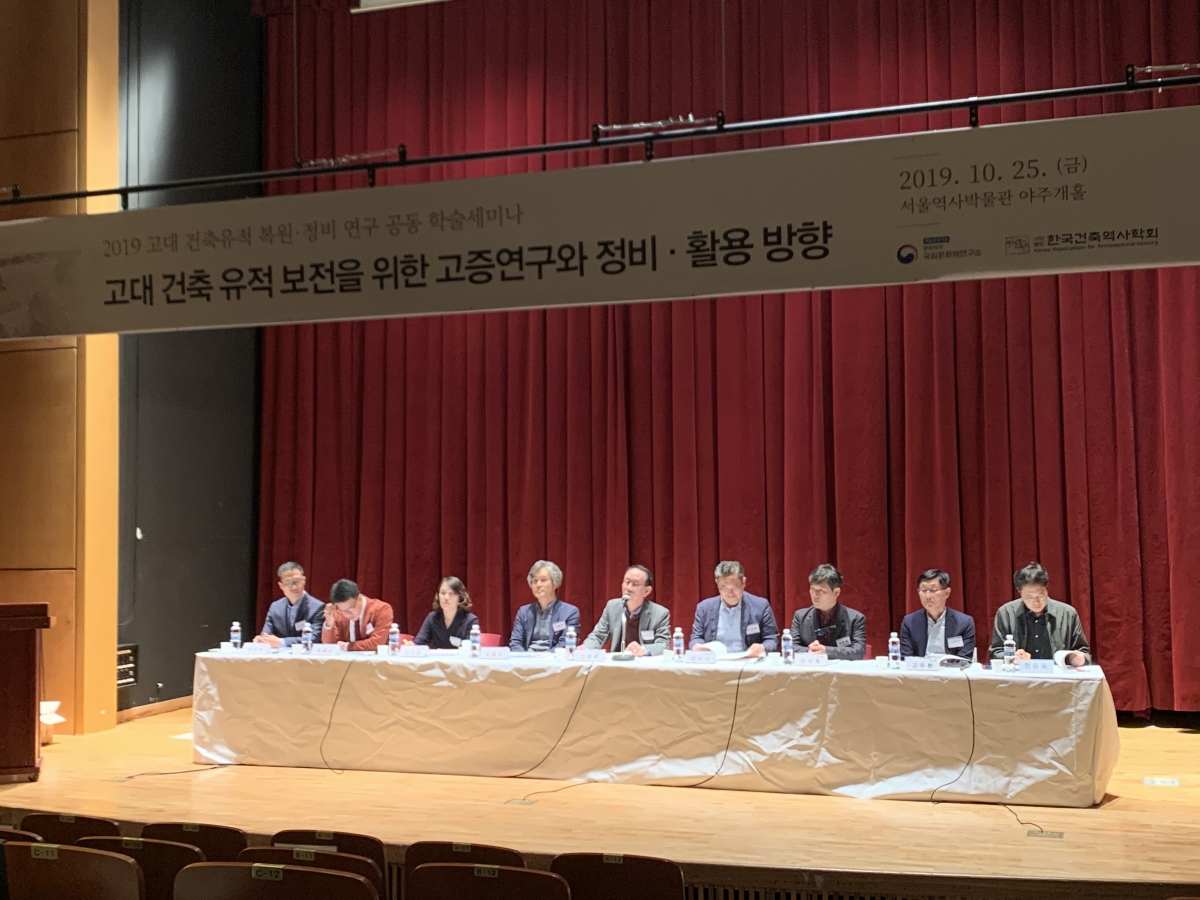