The competition was to turn 1BL and 5BL in the Godeok-Gangil Residential District in Gangdong-gu, Seoul into a ‘Social Smart City’, where advanced smart technologies wil be integrated with an eco-friendly residential complex, diverse urban landscapes, and welfare facilities. After registration in February, SH formed a jury consisting of seven architects to review the project, focusing on specialisation plans, including the complex plan, the architectural planning, and ideas for creating Social Smart City.

‘Five Small Village Community’, the winner for 1BL, divided the complex into five small unit blocks and made the interior and outdoor of the block into a space and path for community activities while respecting the local context. It was planned as "a village where the life of sharing unfolds, with local residents and residents releasing panoramic stories of different lives through contact and encounter’.

‘A Place for Living: the Common Room’, the winner for 5BL, attracted attention for its detailed proposal to create a brand new type of community. It has created a common space for all residents to ease access and expand use with open streets, through various yards and the elevated ground floor, breaking off of the conventional type of collective housing as in the uniform complex which disregards the individuality of each person. By inserting programmes such as smart farms, greenhouses, and family garden, they also plan to initiate a new programme named the ‘Coup Market, the market for sharing’, where residents can share the produce grown in their gardens.

The winning projects were highly acclaimed for showcasing new kinds of future urban villages. ‘They are a mixture of low and high rise buildings, which disclose new possibilities for the traditional residential prototypes established over past years of development’, said Kim Incheurl (principal, archium), the director of the jury board, adding that ‘if it proceeds with delicacy, it will be a pioneering work’. Commenting on the Block 5 project, he added that ‘the project has established a brand-new type of building by combining horizontal and vertical models. It is such a visionary work in that they not only secured the openness on the ground level with sufficient height of Pilotti, but they also imbued the court with various characteristics while connecting with the underground spaces’. 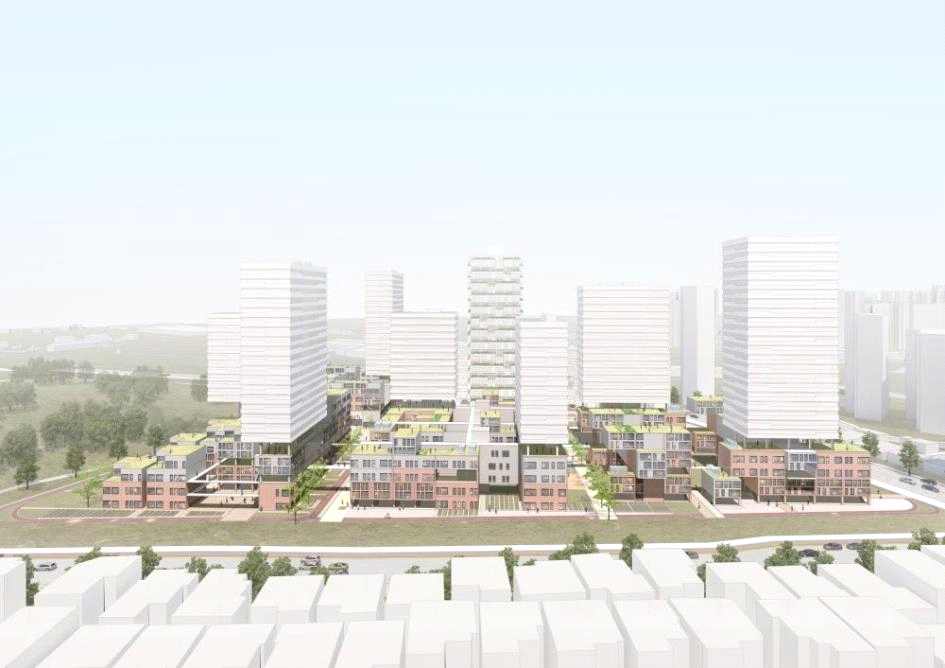 ‘A Place for Living: the Common Room’, the winner for 5BL, Images courtesy of SH​