The newly renovated Gwanghwamun Square, which has doubled in size, opened to the public on Aug. 6. Considering criticism that the previous Gwanghwamun Square was cut off by the road and difficult to function as a square, the Seoul Metropolitan Government expanded the square in the direction of the Sejong Center to promote the revitalization of the area. In addition, history was emphasized through storytelling. The boulevard in front of Gwanghwamun Gate has historical significance as a symbol of the capital of the Joseon Dynasty. It is recorded in ‘Stream of History’ in front of Sejongno Park. If one follows the stream, where the founding of the Joseon Dynasty is engraved year by year to the present day, one passes through the main spaces of the square. Historical remains excavated during the construction are traces of the long history of Yukjo Street, where key government offices were located during the Joseon Dynasty, and which has now become an on-site exhibition space. The ‘Site of Saheonbu Gate (the then Board of Audit and Inspection)’  is displayed as it was at the time of excavation; the remains of Samgunbu Site (the then Joint Chiefs of Staff, in front of the current Integrated Government Building), Byeongjo Site (the then Ministry of National Defense, in front of the existing Sejongno Park), and Hyeongjo Site (the then Ministry of Justice, in front of current Sejong Center for the Performing Arts) were re-covered and the description of the site was recorded on them. In other words, they are open-air museums where one can experience the place firsthand. In addition, the ‘Hangeul Fountain’ was designed in the form of Korean consonants and vowels to harmonise with the statue of King Sejong, and the ‘Myeongnyang Fountain’ next to it was planned in front of the Statue of Admiral Yi Sunshin, as a floor fountain with monuments that record the admiral’s significant victories and known sayings. Moreover, the media wall has been used to consider the connection with the square. Video is transmitted from the media façade, installed in the screen of the Sejong Center and the KT Building. In the square, these face each other across the media wall of ‘Haechi Madang’, intended to introduce Korean culture and nature to onlookers. Cultural events for citizens will be held in ‘Yukjo Madang’ in the north and ‘Nori Madang’ in the south. Meanwhile, the restoration of Woldae (the stylobate of the Gwanghwamun Gate) and statues of Haechi (a mythical guardian unicorn-lion) is expected to be completed in collaboration with the Cultural Heritage Administration in 2023. 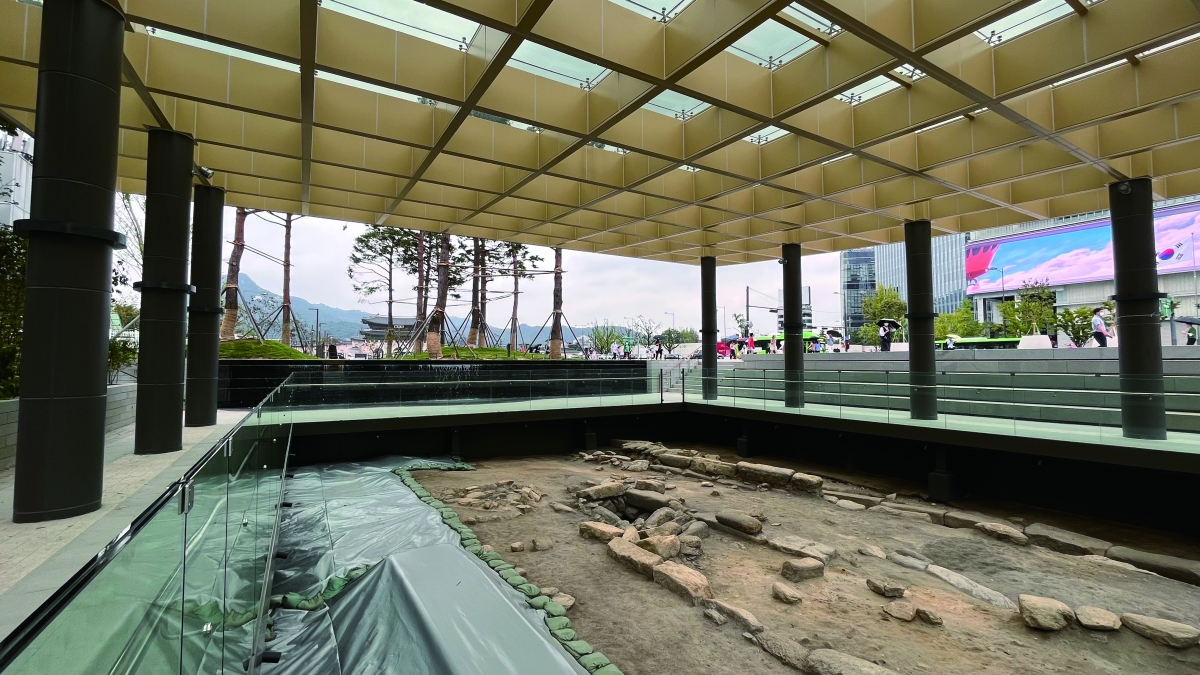