In Suwon City, there is land that is restricted and denies public access, and this is none other than Suwon Air Base (military airfield no. 10). There have been constant debates regarding its relocation due to problems regarding security and deterioration. But if the plan does go through, will it be possible for this area to remain empty and out of the sight of the forces of capitalism? Or, this prompts the question—why do we need empty spaces in a city? The answer to this question was found in curator Sim Somi’s lecture ‘Empty Space Struggle: Why do cities need empty spaces?’
In a lecture hosted by the 2022 Suwon Public Art Project on Sep. 22, Sim Somi introduced examples from Europe where empty places were kept intact against the forces of development. The first example was Flughafen Tempelhof. This airport was first built in 1927 in Berlin, but it was expanded during the Nazi regime and was finished in 1941. It was used for military purposes but after the Second World War, it was repurposed into a city airport. It was closed in 2008 due to problems with management, but post-development plans were met with resistance movements. Currently, this place is a free space for citizens. It is usually used as a park, but occasionally it is used to hold motorsport races or exhibitions. The airport building was turned into a temporary stay for refugees. This was possible only because this place was left undefined in terms of its purpose and kept empty for flexible adaptations according to public need. Flughafen Tempelhof and Suwon Air Base share similarities in that they both reside in the middle of the city and that they both embody the painful history of war. To compare their sizes, Suwon Air Base is at about 5,250,000m2 and Flughafen Tempelhof at about 3,800,000m2. In terms of the area, Suwon Air Base possesses the site conditions to become a bigger public place. However, one should also be aware that public developments can privatise an urban space. Sim Somi said, ‘because it is common in Korea to have public development projects funded by the private sector, there is a strong influence over public land as a privately-owned asset’. France’s TEP Ménilmontant is an example case where development plans under the name of public interests such as public rental apartments and rehabilitation centres were withdrawn to keep the place empty. This place became a popular spot as in 2019 an autonomous civil coop organised a health training programme for free or at reduced cost. There is also a instance where an empty building was transformed into a new model to serve wider society. Les Grands Voisins (2015 ‒ 2020) is a welfare facility created by Aurore Association for vulnerable social groups. There were various experiments with welfare services such as the recruitment of jobless people and the use of alternative currency, aside from providing amenities. Through these examples, Sim Somi ended her lecture by saying that ‘empty space in city has the potential to create various forms of social encounter and physical activities that go beyond chatting over coffeeʼ. 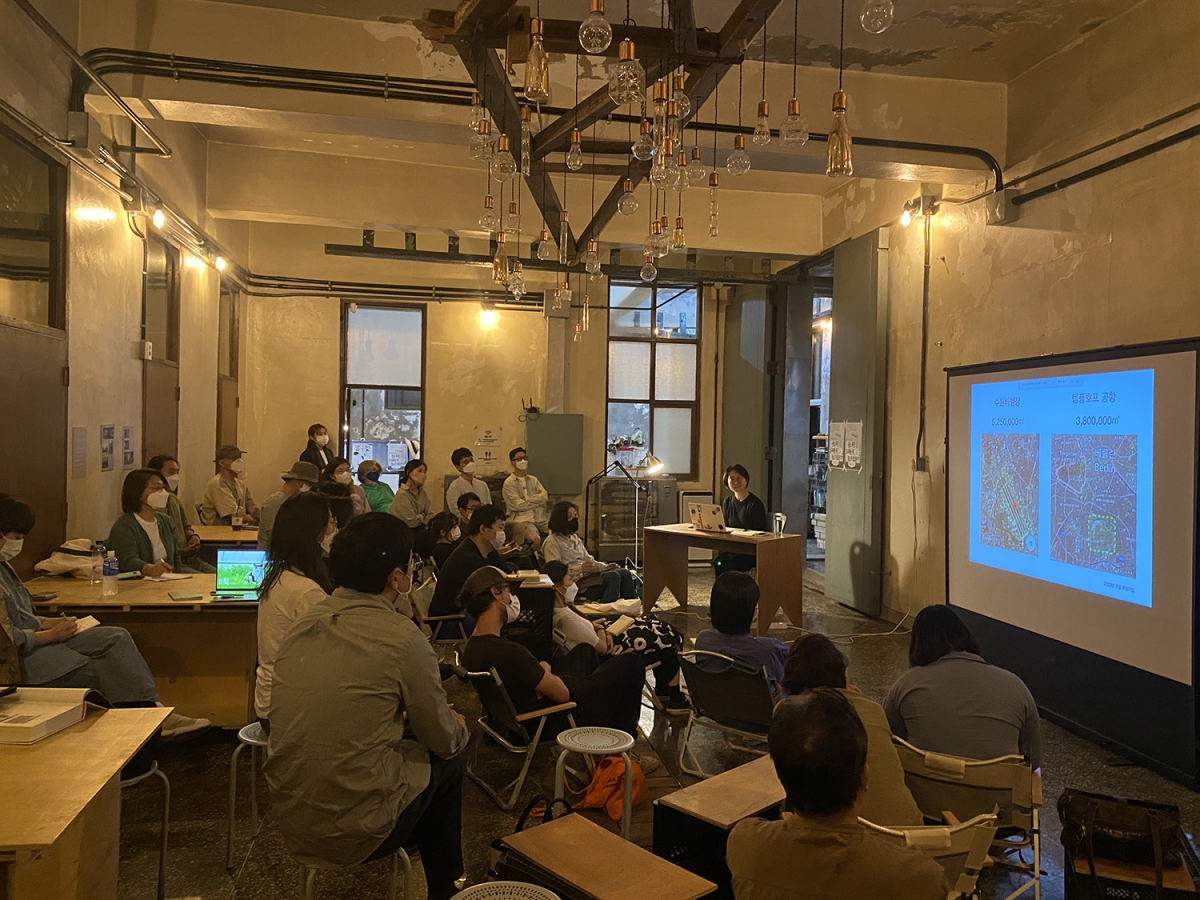