Digging into the Errors of Media: Hito Steyerl’s A Sea of Data 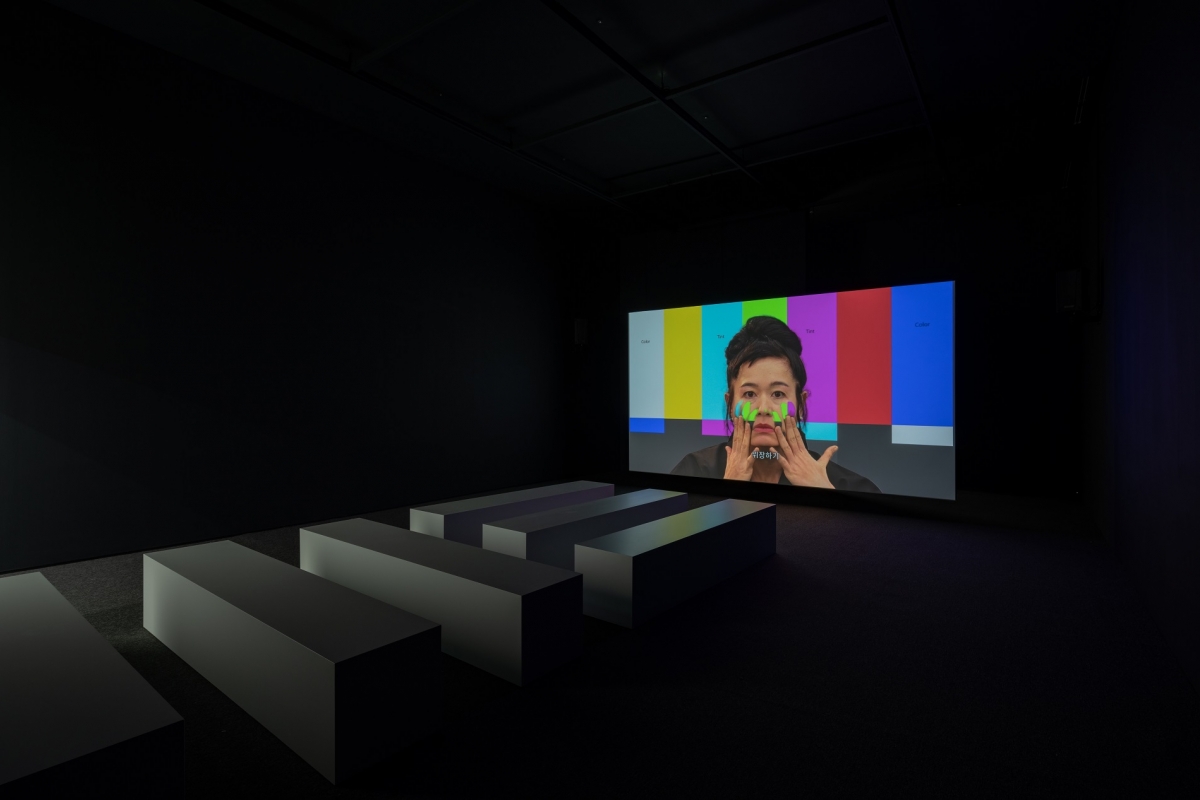 Exhibition view of How Not to Be Seen: A Fucking Didactic Educational .MOV File(2013)

Theorist and media artist Hito Steyerl has exposed points of intrigue and contestation in media, image, and technology across text and video art. As a video goes through processes such as video production and media transmission before it reaches the public, Steyerl focuses on the errors or issues that can arise in such processes. In a book titled Die Farbe der Wahrheit, Steyerl argues that even documentaries are fictional works composed of arrangement and data, virtuality and reality, and myth and creation.

In this exhibition, a total of 23 works ranging from her early documentary-styled video works to her ‘Animal Spirits’ (2022), that was newly commissioned by the National Museum of Modern and Contemporary Art, have been arranged to provide an overall look around Steyerl’s worldview. ‘Mission Accomplished: BELANCIEGE’ (2019) is a lecture performance video work that explicates the way how products exceed their origins and identities by being created, uploaded, and shared on social media. The word ‘BELANCIEGE’ that Steyerl uses here refers to the method of the fashion brand Balenciaga and the unique influence exercised by fashion data over politics, mass media, and economics. One of its key arguments is that the product image shared across social media turns users into unpaid laborers.
‘Animal Spirits’ (2022) takes a shepherd living in the wild as the protagonist to expose how our environment is exposed on media. Steyerl states that someone who is fond of wolves has never gotten off from one’s vehicle, and she suggests that the ecosystem differs from the world shown on media. The reason why the shepherd goes about wearing a wolf’s skin is because the shepherd—like a wolf—wants to find easy food from the tourists that live as ‘aristocrats’. There is also a reason why the shepherd puts on face painting. It helps to hide one’s personal identity by blocking out facial recognition algorithms, and thus it allows one to evade taxes. ‘How Not to Be Seen: A Fucking Didactic Educational .MOV File’ (2013) also delivers a critical message about our digitized society. This work explains the following five ways to stay hidden from digital surveillance: the way to avoid being seen on camera, the way to avoid staying in sight, the way to turn into an image, the way to become invisible by disappearing, and the way to become invisible by annexing oneself into the world turned into an image. Combining acute insights and humour, as for specific ways to disappear and become invisible, Steyerl proposes methods such as becoming a defective pixel or becoming a missing person by turning into an enemy of the state, and for specific ways to stay hidden from sight, she suggests entering a military zone or becoming a woman in her fifties as examples. The exhibition will be held at Museum of Modern and Contemporary Art, Seoul until 18 September.
No.656 June 2022 Hito Steyerl video art MMCA
LIST
bookmark_border
favorite_border
0