As President Yoon Seok-yeol, who took office on May 10, declared the new ‘era of the Yongsan Presidential Office’, the development plan of the Yongsan area and the plan to draw on the existing Cheong Wa Dae emerged as a primary concern within various circles. On Apr. 21, the Federation of Institutes of Korea Architects (FIKA) held a discussion forum to explore the ideas of architectural experts as an address to the Presidential Transition Committee.

Seok Jeonghoon (president, FIKA) opened the discussion by noting, ‘for a historic decision that will instigate major changes not only in the Yongsan area but also throughout the entire urban spatial structure of Seoul, in order for this to become a stepping stone to national growth, a change in associated plans must follow’. Lee Huijeong (professor, University of Seoul) and Lee Hyeongjae (advisor, Junglim Architecture) presented their thoughts. Lee Huijeong argued that planned and systematic development should be carried out, overcoming a process of trial and error as the presidential office was moved to the Yongsan area, where discussions on development and conservation had been ongoing for a long period. To avoid excessive expectations and development pressures becoming obstacles to the future, ‘integrated governance’ between the public and the private sector, architecture and cities, and transportation and environment, is more and more crucial. Lee Hyeongjae explained his experience as a responsible architect in constructing the new facilities of Cheong Wa Dae in the late 1980s. The decrepit facilities of the old Cheong Wa Dae main building and the change in national status in the community of nations, due to accelerated democratisation and economic growth, required a new office facility. He explained the historical narrative contained in the architecture of Cheong Wa Dae, revealing that he borrowed the hanok style to render it symbolic as a representative facility of the nation. He suggested that areas open to the public should be selected based on a sufficient understanding of the history and uses of existing facilities while also seeking preservation measures that could continue the symbolism of Cheong Wa Dae.

After the presentations, Kim Gwanghyeon (honorary professor, Seoul National University) facilitated the discussion. Debaters’ comments on the use of Cheong Wa Dae were in the same vein as Lee Hyeongjae’s earlier presentation. They also agreed on the need to manage an area that encompasses the surrounding areas from Sejongno Square to Seochon and Bukchon. Regarding the development plan of the Yongsan area, there was no disagreement in the discussion between a range of panellists that a new master plan from a macro perspective is needed. The underground construction of the Gyeongbu Expressway and KTX has emerged as an urgent task. In addition, Kim said that the Ministry of National Defense, where the Office of the President is located, is limited when it comes to realising effective communication with the public. Kim concluded the discussion and urged everyone to consider a commitment to organising towards practical communication to reflect the opinions of experts in future national decisions. 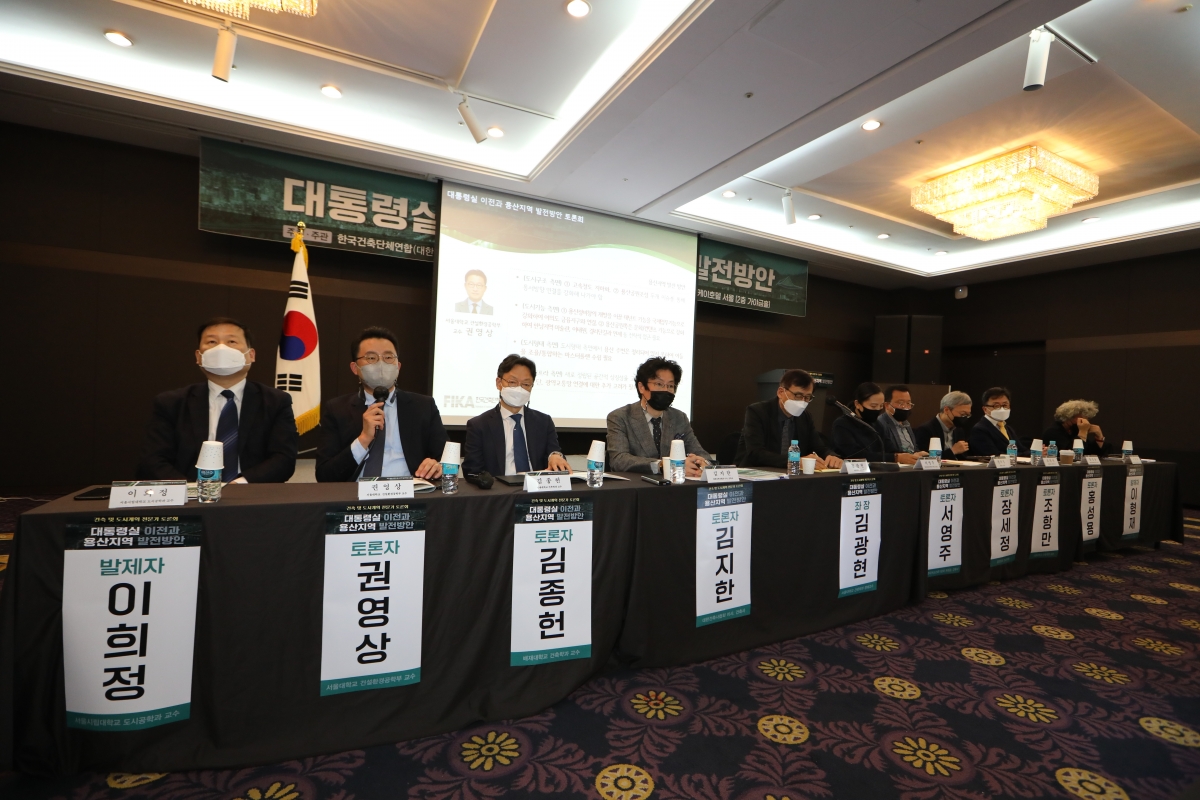