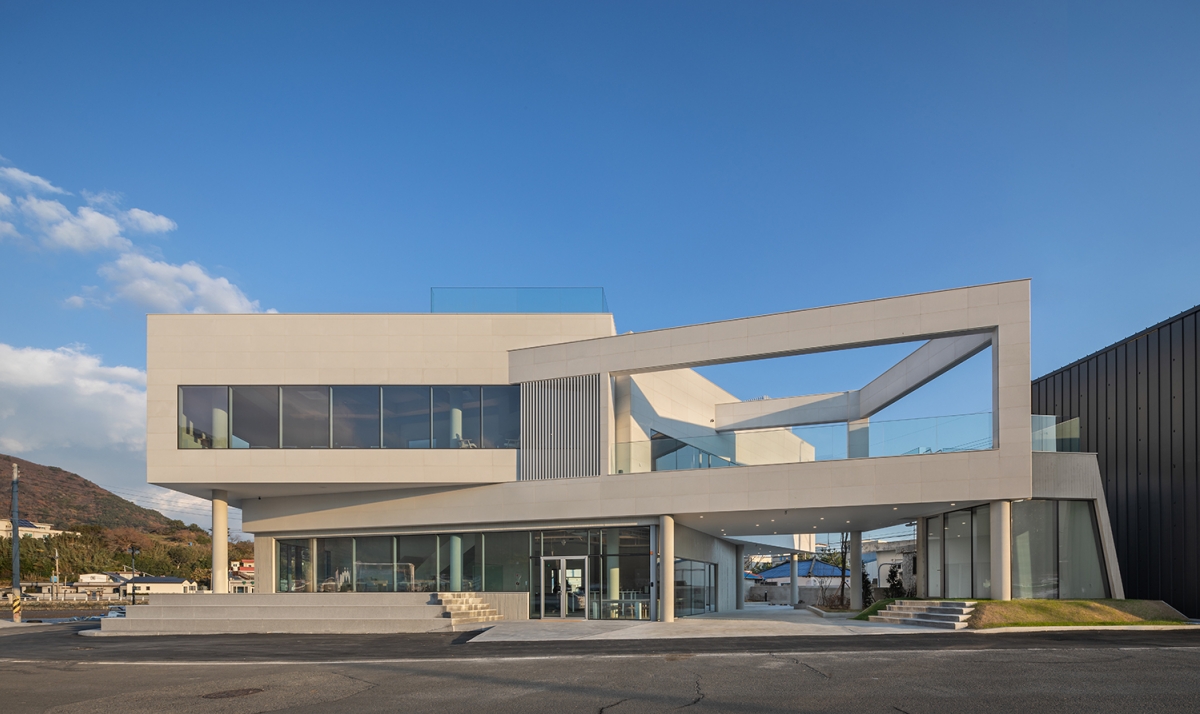 Sinki Industry Company (hereinafter Sinki Industry) is a manufacturing company that has produced steel office supplies for three decades, and currently operates five merchandise and food and beverage stores in Youngdo of Busan. These spaces are places where individuals recuperate and turn to the existing buildings, and yet it is not easy to recognise their architectural value at only a glance. Nevertheless, Oh Sinwook (principal, Architects Group RAUM) has rediscovered architectural elements from the established spaces of the Sinki Industry, reinterpreting them through a new work of architecture. Let’s follow the journey undertaken by Sinkihaero and come to understand how this site was reconceived and built.

Han Garam (Han): Last winter, the café of Sinki Industry, Sinkihaero, opened. Could you briefly introduce this company and their spaces to us?
Oh Sinwook (Oh): It has been four to five years since a café culture settled in Busan, and since then independent cafés have become better known that branded outlets . In particular, as admired cafés like Waveon and Rosso emerged in the Gijang, this area became an arena of café competition. One region that unexpectedly rose to the fore in Busan is Youngdo. They say that the energy in Youngdo island is so strong that ‘if you go to live there once, you’ll either come out dead, or never at all’. The island became famous for its cafés as in 2018 Sinki Industry opened a café.
Sinki Industry is a manufacturing firm which started out making steel bells. The young brothers who inherited the firm sought to overcome the prevalent threats to the manufacturing industry by seeking out new industries and products, and reformed part of its headquarters as a café. The building, which sits upon a hill overlooking Youngdo, with stacked white container boxes with an emptied-out ground floor received a lot of attention on social media. With this project as a based, currently Sinki Industry has renovated and revived surrounding buildings and runs other cafés, restaurants and stationary stores. It is in a form as if it has become a ‘Sinki Town’.
Han: Sinkihaero is the first project made together with an architect for Sinki Industry, and is the first space to be made in Geojedo instead of Busan.
Oh: One day, the head of Sinki Industry was driving by the Dadaeri road of Geojedo and saw a sushi restaurant being demolished, and so in its place decided to create a space in which people could rest and look out at the sea. When they first contacted me, they said that they had purchased land to build a café, but that the site was an irregular form, and they wanted to create a good space with me, after seeing the cafés I had designed. Until that point, Sinki Industry had only dealt with space in terms of interior design without an architects, and wished to build the new café in Geojedo by modifying houses like before. I felt that while regenerating old city centres in big cities was appropriate, it would not be so to do the same thing in Geojedo. I persuaded the client that a new space should be created anew, and well, to suit the site, and the project was carried out after they accepted this.
Han: The building is located in a seaside village around 10 minutes by car from the Hill of Wind, the central tourist attraction in Geojedo. Could you explain to us how your interpretation of the site is reflected in the project?
Oh: Regarding the mass, I sought out the directions offered by the sea, the surrounding hills and wind, and considered how they might meet the architecture. By calculating how nature might be observed within a mounted three-dimensional mass, it was emptied out and filled. Then, using stairways and circulations, the mass was connected to complete a two-dimensional floor plan. While most design processes evolve from two to three- dimensional, the three-dimensional form was first considered to complete the two-dimensional design.
I was also inspired by the name Sinkihaero, created by the clients, when reinterpreting the site. Sinkihaero suggests that Sinki Industry would establish stores in Geojaedo from Youngdo, to reach out into the world through a ‘sea route (haero)’. The entrance was determined by imagining how to come here from Youngdo. A water feature and pavilion was established in the rooftop to demonstrate the power of the winds and the high and low tides. Impressions of the Hill of Wind were also applied to different points throughout in the building. While it may be slightly crude to imitate a hill, as an architect, we wished to provide a simpler allusion as it was a facility to be used by the general public. 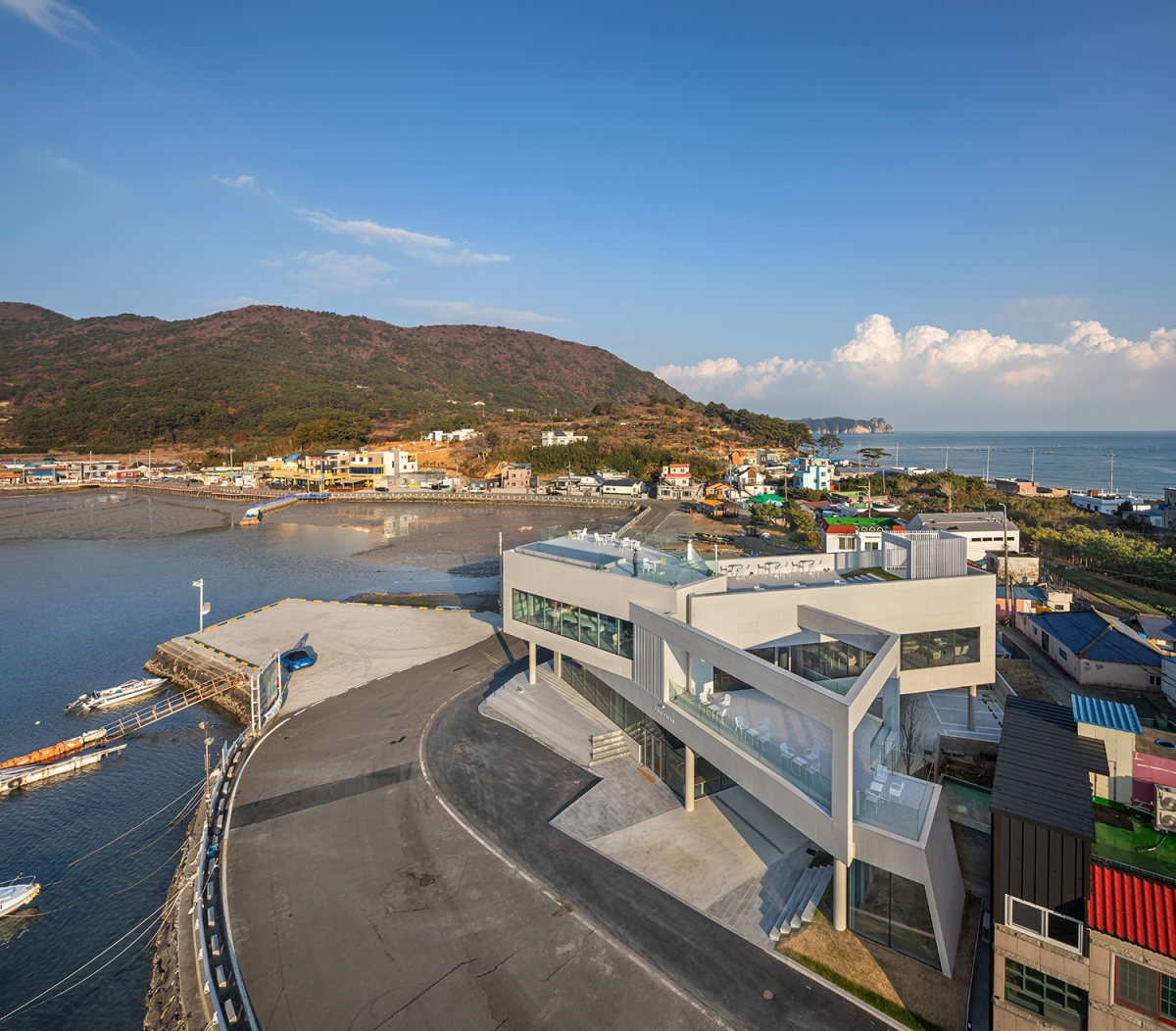 Han: How are the Sinki Industry brands and their spaces connected to the Sinkihaero?
Oh: First, we concentrated on how it would look if Sinki Industry were to build a café in Geojedo. Actually, Sinki Industry did not really understand the full potential of the identity of their spaces, so I proposed a guiding identity after the fact. To this end, I toured the diverse spaces of Sinki Industry and analsyed the characteristics of each of the spaces. Here, an important point was to discover the signature image behind Sinki Industry through the eyes of the general public rather than the eyes of an architect. The stacked containers of Sinki Café, the large opening towards the sea, are representative examples. These images were reinterpreted by stacking and distorting masses similar to the shipping containers, and inserting piloti on the first floor.
The café Sinki Forest, managed by the Sinki Industry, provides selectively captured scenes through a big window facing the woods at the rear. While people like this view, I felt that the view from within the interior was more valuable. In Sinkihaero, outside views change according to the angle, selectively framing nature from the inside. The direction was also modified to avoid the glare of the sun when observing the sea.  Finally, the original image was rediscovered by tracing the history of Sinki Industry. Sinki Industry, which was once used to manufacture steel bells, possessed a machine to make them. It also struck me that this was part of the brand’s value, and so I created a separate volume as a machine exhibition space on the first floor. Creating the pavilion using aluminum on the rooftop is also connected to this aim. As the wind passes through the louvers, it creates the sound of bubbles, and this allows a multisensory experience of nature while simultaneously featuring the characteristics unique to Sinki Industry.
Han: It’s like you were both architect and director. I guess you may have learned something from this process.
Oh: It is not an easy task to apply the values of a brand to a space and its form. While it may be abstract or quite crude, the attempt was made to apply the characteristics of Sinki Industry to the architecture. This spatial identity maintains a sense of continuity for the brand, proposing reasons why people should come here as a marketing element.
Sinki Industry is ambitious about creating a ‘the second Sinki Town’ reminiscent of the village in Youngdo. The client was satisfied with the project, and so also requested the design for a nearby restaurant. At present, the project has been authorised for construction, and will begin on-site in the autumn. A slightly different brand identity will be achieved through the exploration of a different concept from Sinkihaero, so please look out for it! (laugh) 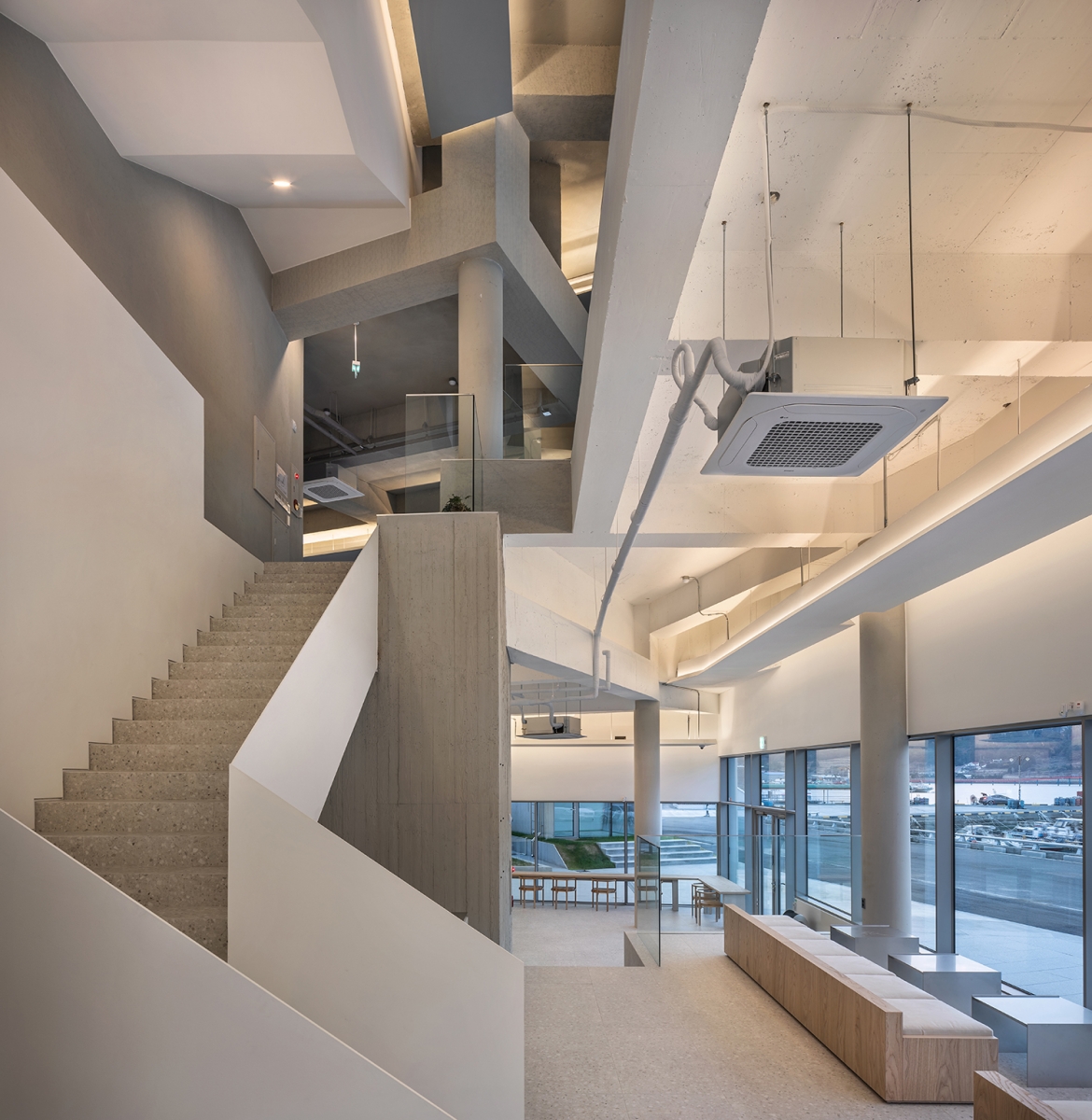 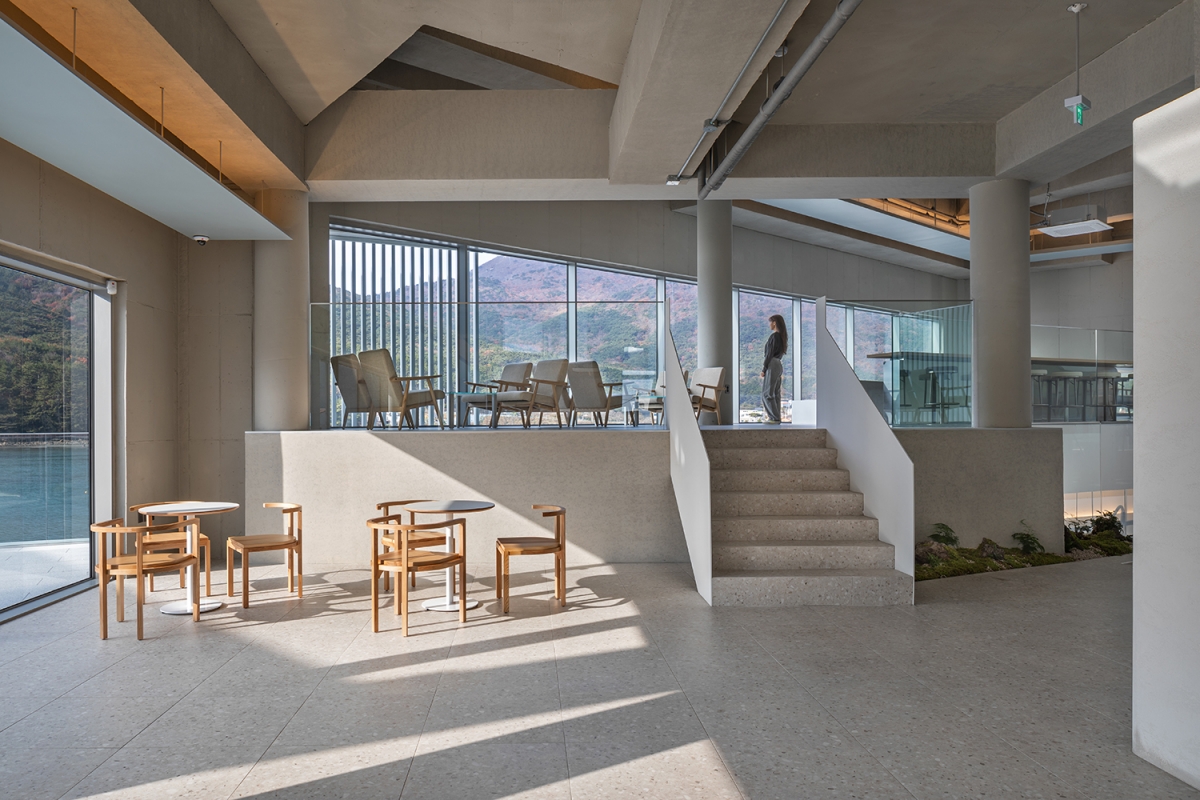 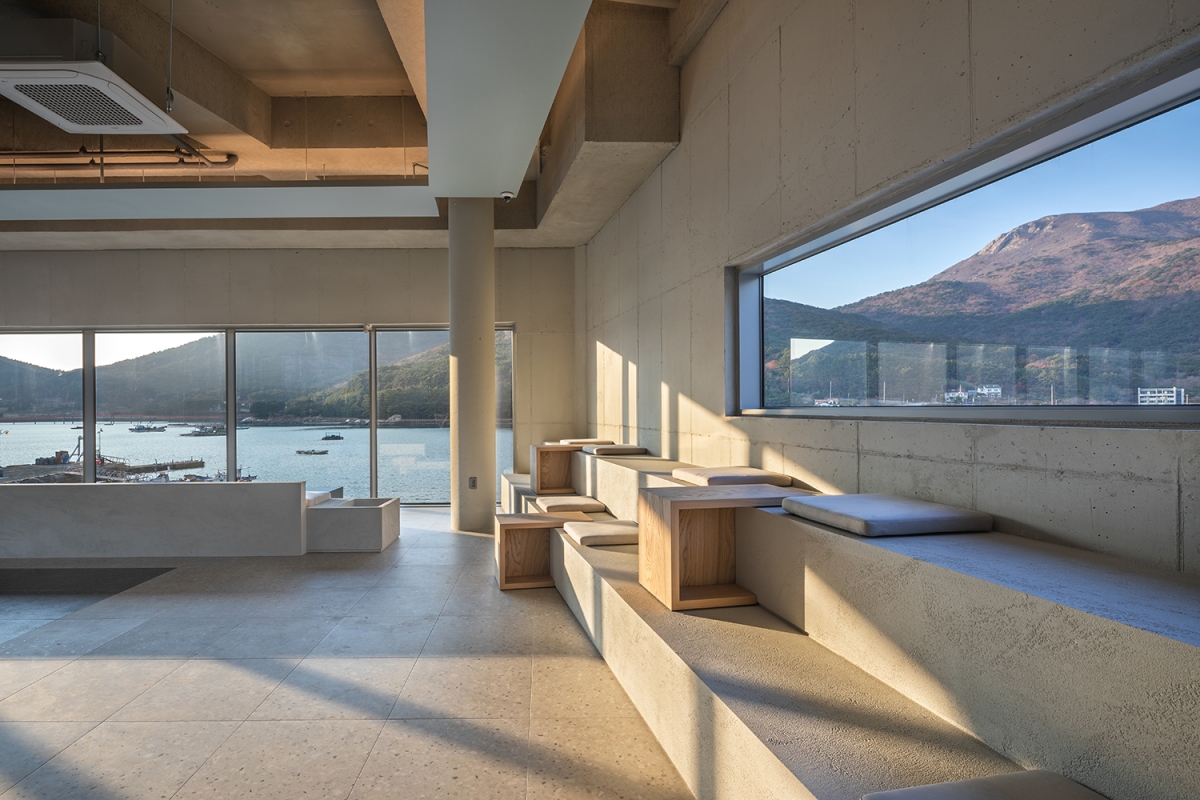 Han: Recently, a greater proportion of architects’ projects are cafés, and you yourself have worked on four café projects, including Sinkihaero in the past year. What are the most vital considerationse or architectural approaches to keep in mind when working on café projects as an architect?
Oh: When designing cafés in recent months, I often asked myself the question ‘how should café architecture in order to encourage customers to visit often, rather than just once?’ The solution is to create diverse interior spaces. Sinkihaero has different floor levels according to the zone, and each level possesses a visually and spatially different ambiance. The entire outline of the interior is not apparent when standing somewhere inside. This invokes a sense of curiosity when registering diverse changes in the space. One cannot experience the project in full on one occasion, it would take at least five visits.
I also believe there is an appropriate size for such spaces; an appropriate number of seats, appropriate width of passageways and bathrooms, and so on— it would be a waste to go beyond a certain size. In particular, it has become important to modify the number of tables so that no more than 20 visitors will come into view when sitting in a certain place. This would mean that however large the café, one would be able to instinctively avoid the feeling that the café was a bustling and frustrating wedding hall.
Café architecture is a good tool for the public to cultivate their individual taste when observing architecture. Most of the cafés I have designed either have no wall, or have an extremely low wall, allowing easy entry. I believe that this accessibility is a public value that café architecture must maintain. Moreover, café architecture is a field in which can observe whatever idea the architect might have, as the concept can be determined more flexibly than other programs. In this sense, the café can become a new architectural typology in the future with unlimited potential. ​ 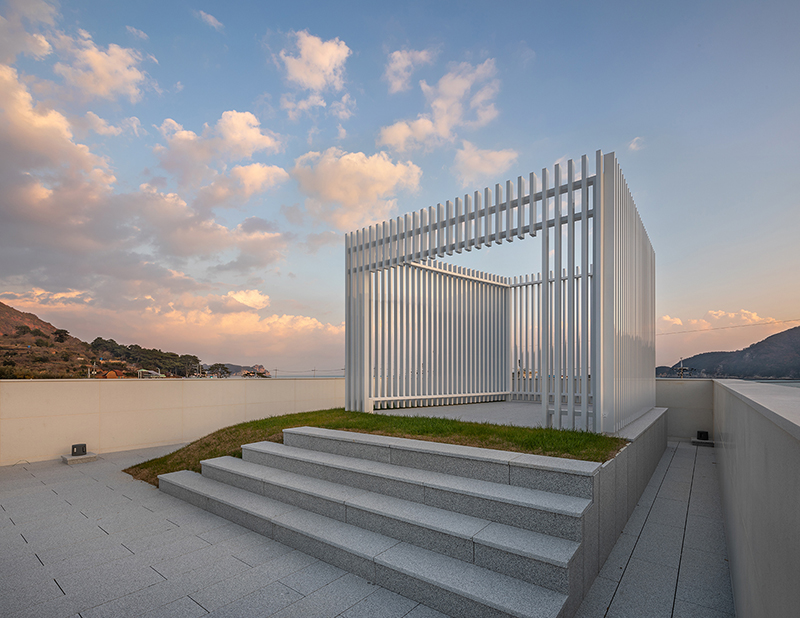 Han: Architects Group RAUM has, until now, been most active in Busan. Busan has also gone through a lot of change, as, like in any city, certain areas gain popularity or fall into disrepute, and buildings follow suit. We would like to hear your thoughts on architectural trends.
Oh: Until ten years ago, Busan architecture had no perceived identity, and architects based in Busan struggled to cultivate individuality. What was considered good architecture was massive public architecture projects or those built by foreign architects, with one-off projects designed by famous architects from Seoul. The buildings that emerged at this time were more focused on economic value rather than architectural value, and were often worse in quality than other buildings that were demolished.
Somehow, a decade has passed, and now there are many more good colleagues and ateliers, with talented younger architects settling in the region. Of course, while we are still short in members, architects in Busan have been forging relationships to remain in existence. Moreover, this has given rise to better conditions for the appearance of construction firms who wish to create good quality buildings, and for clients to change their perception of what good architecture might be. Compared to the metropolitan area of Seoul, we still lag behind in terms of specialist technicians and scales of investment, but the potential of Busan architecture is huge. The architectural culture of Busan is bound to develop even further if the local architects of Busan recognise what must be attended to and carry on working on our unique projects with the same sense of conviction as today.​ 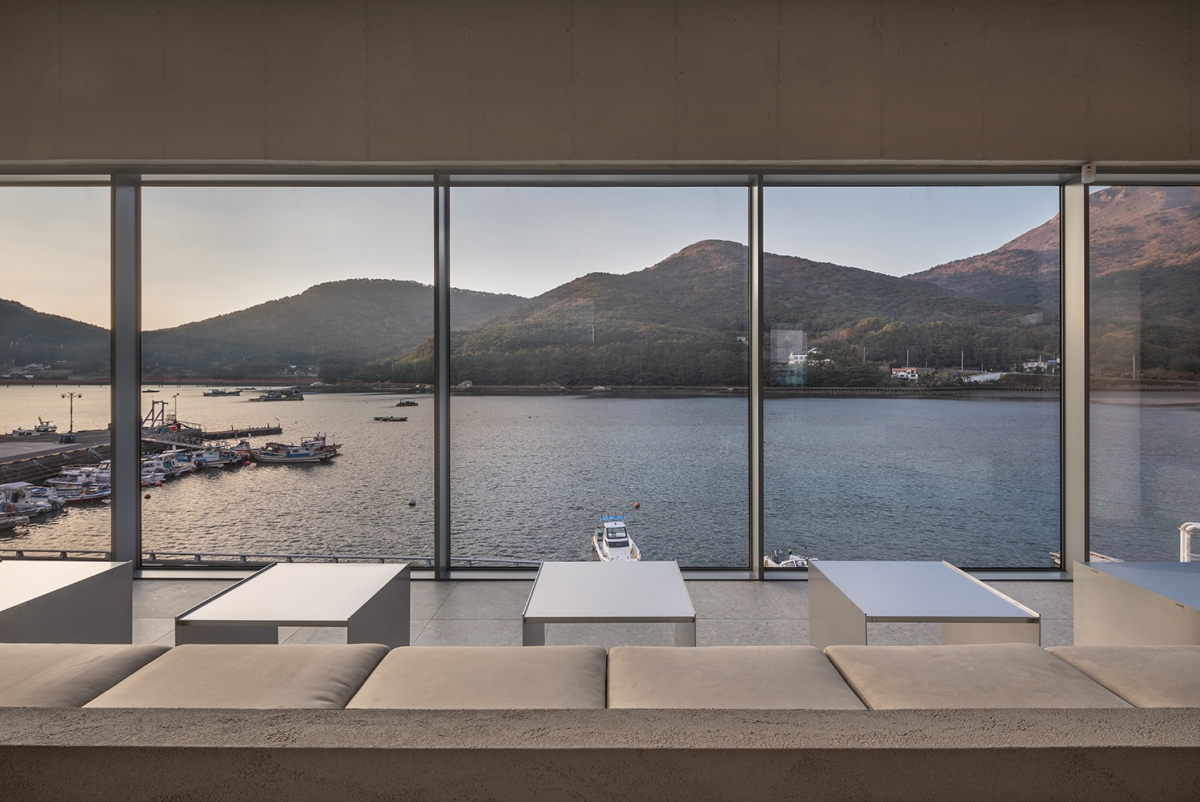 Oh Sinwook
Oh Sinwook is principal of Architects Group RAUM and works as adjunct professor at Dong-A University and a public architect in Busan. He graduated from Dong-A University in the Department of Architecture and earned a doctorate in his thesis, Study on the Meaning and Effect of Schema in Architectural Design Process. He has been working on a variety of projects under the theme of ‘spacery and the future ahead, the new spectrum of white’, and have been awarded 2015 Rising Architecture Award, 2017 Korea Architecture and Culture Awards, and the grand prize of 2019 Korea Architecture and Culture Awards. Representavie works are Half House, Inter White, Morning Dew, MoYeoGa and he recently published Architecture of Self-esteem.
No.654 May 2022 SINKI INDUSTRY Sinkihaero Geojedo cafe
LIST
bookmark_border
favorite_border
0