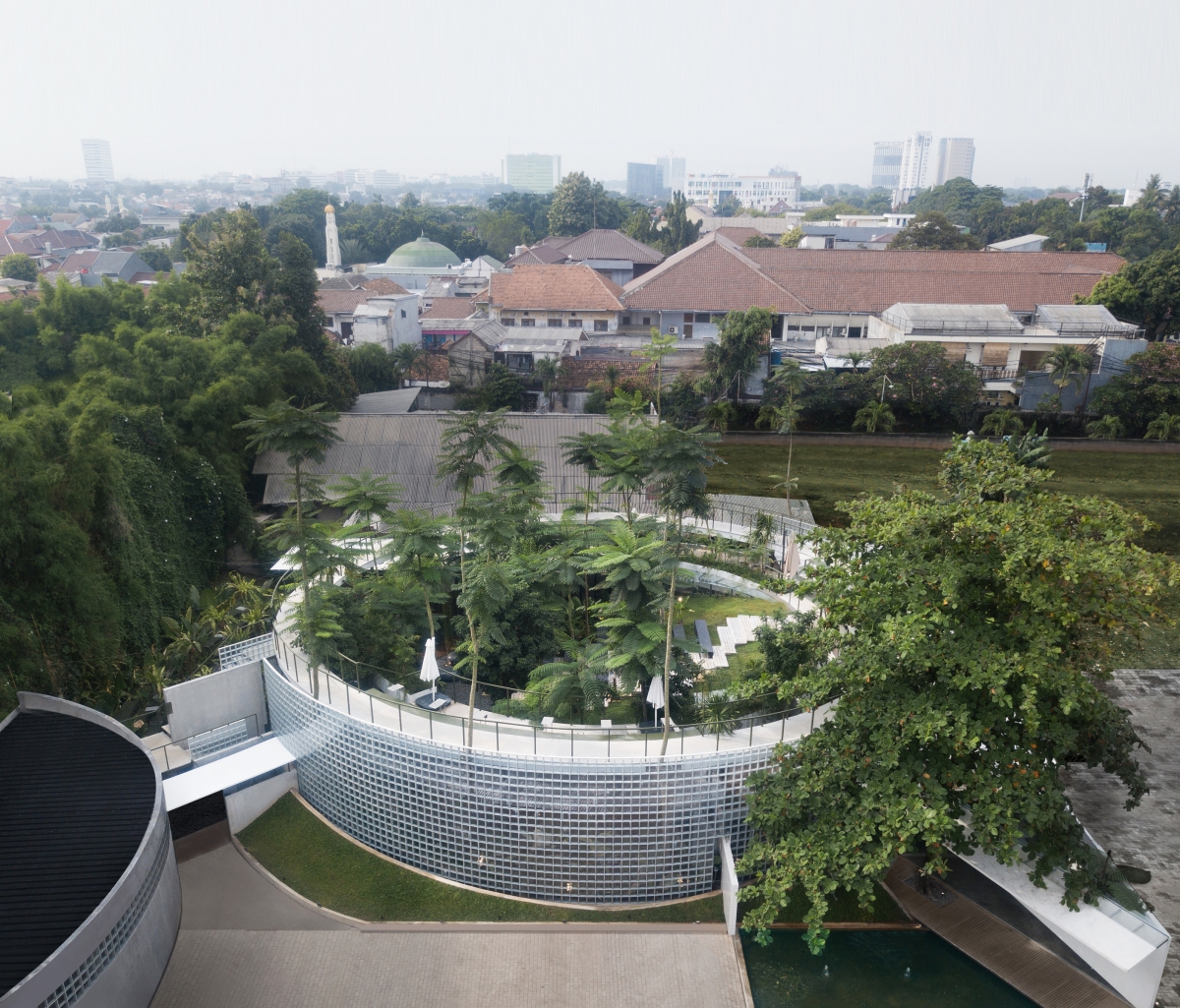 ​There are various ways in which a café can gain more publicity. Tanatap Ring Garden, which is a café located in Jakarta, Indonesia, began with the local architect’s understanding of the lack of good public architecture in that area. They explore the possibility of an architecture that benefits both humans and nature, citizens and developers, by providing gardens to citizens and realising profitability through commercial spaces that also seeks a togetherness with nature.

Park Jiyoun (Park): Tanatap Ring Garden, a café in Jakarta, Indonesia, is the second branch of the Tanatap coffee shops. What makes Tanatap brand different from all others?

Antonius Richard Rusli (Richard): Quality open space is the single most important thing that architecture can pursue right now for developing cities and in a developing country such as Indonesia, where the government lacks capital and the capability to ensure its citizens a good, safe, healthy and well maintained public space, let alone a proper one. Tanatap Ring Garden, is actually not a coffee shop, it is a coffee garden. The idea of RAD+ar to invent the Tanatap brand as a means of education for developers to encourage work on nuanced and sustainable designs and to suggest that such designs can also be the most profitable. So far it has succeeded, and it has certainly helped the course direction of many developers to using their land by applying similar approaches. As for the benefits to the wider public, they have more options of quality public space – it just a win for everybody.

Park: You began the project with the question, what if a building was to act as an envelope for a garden? The idea seems closer to a sense of togetherness which means living in harmony with nature rather than preserving and protecting nature. What is the starting point of this idea, and how was it implemented in terms of architecture?

Richard: All I dream, is one step closer to creating more sustainable commercial spaces and less malls as those so often cropping up in tropical cities like Jakarta. Living in harmony with nature is only one example of how we can achieve that. In this Tanatap Ring Garden, we wanted to demonstrate to the visitor that sometimes they are not always the protagonist in the story, and that all of the spaces they encounter are consequences of a spatial experience. This means visitors get be the secondary character through their spatial journey in order to meet up with the real hero of the space, the nature. 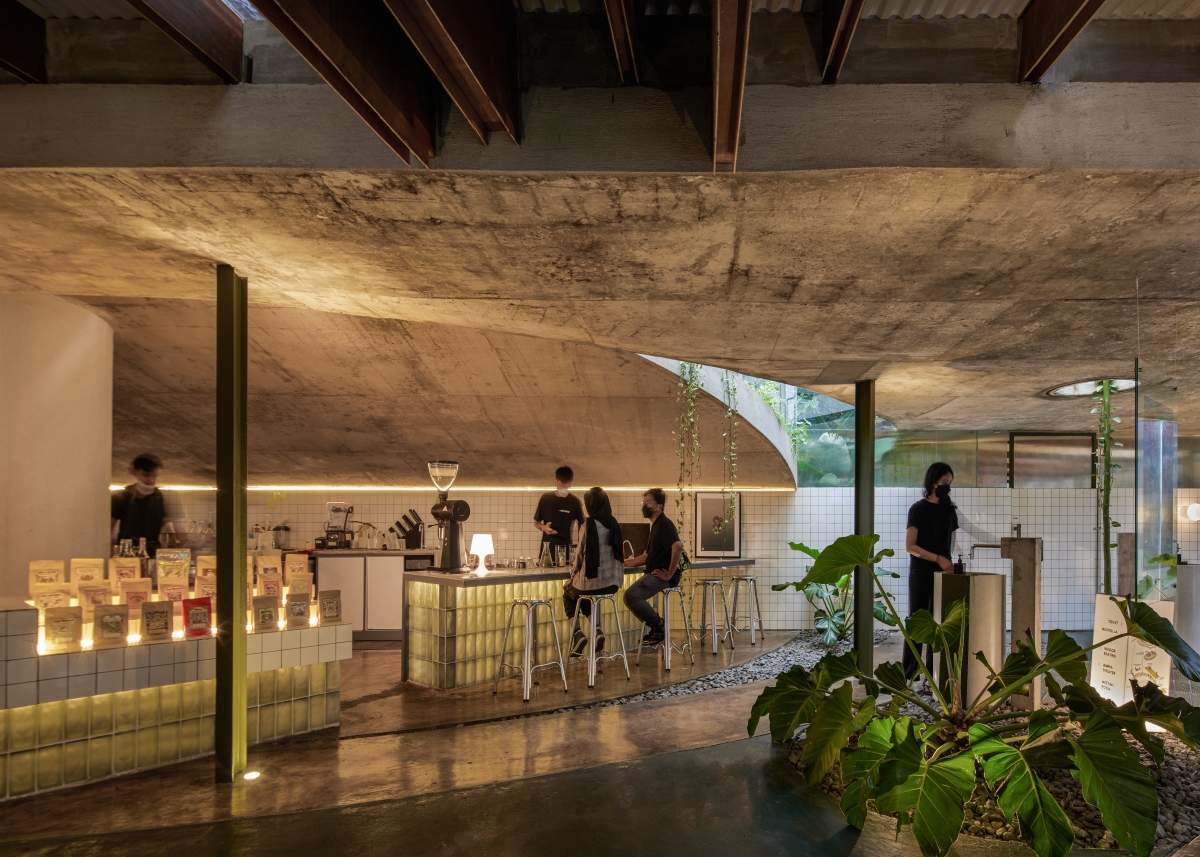 Café​ bar on the first floor 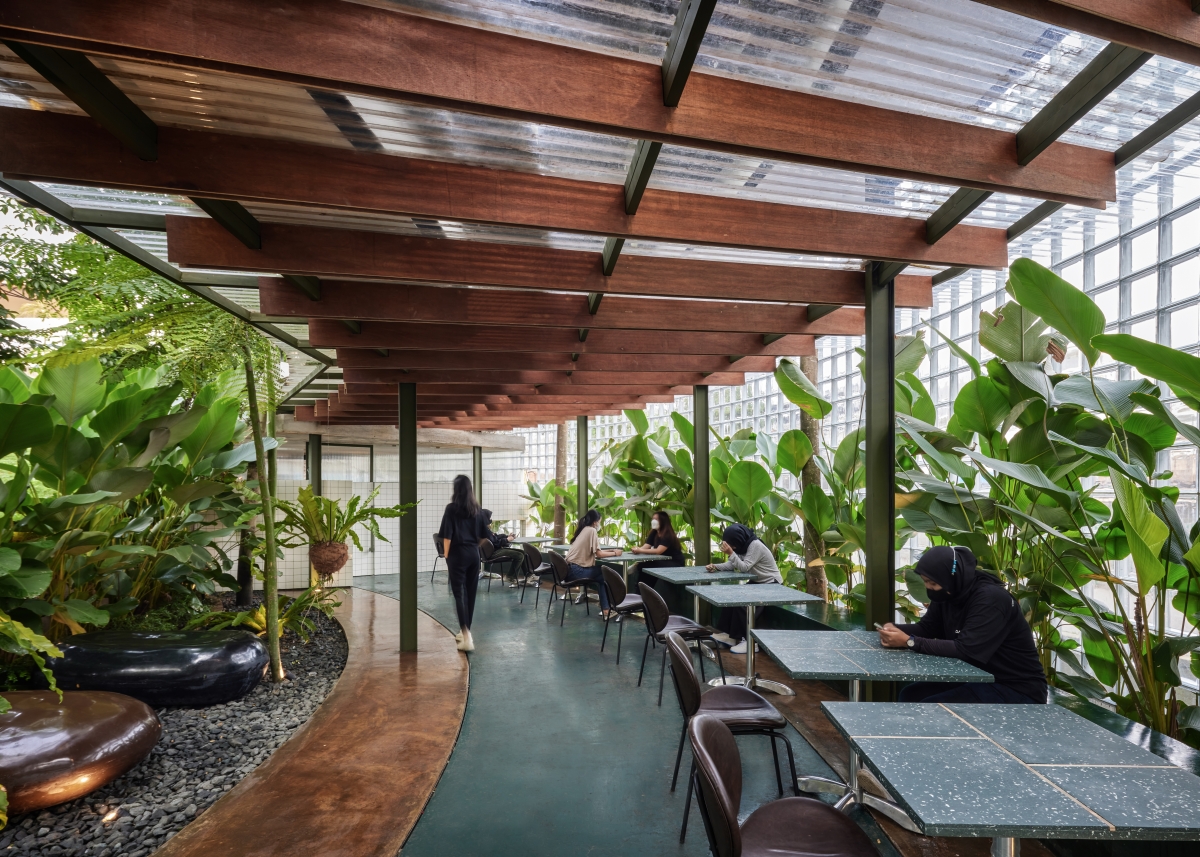 The surrounded pathway on the first floor

Park: You integrated interior and exterior by omitting walls and ceilings and by making use of existing trees. Please explain specifically what points you considered to in order to implement this.

Richard: As the market grows with our more educated society, the better architecture experiences introduced to its citizens, and they will be exposed to many variations of three elements in particular that constrain space: the floor, wall, and ceiling. In order to create a provocative narrative to a visitor, the design was trying to create the absence of such a dominant element. A gesture as simple as abstaining from exerting a particular force by which people should notice things that are uncommon, means that they might come to understand and comprehend the intersection of space and nature along with the space. There is no end, and so the design intended for the space to be a loop, guided by an idea to create a three-dimensional park. It was originally planned as a satire on our poor public spaces designed and run by the government.

Richard: I believe you do not have to tick all the boxes, as architecture doesn’t necessarily set out to establish a set of dogmatic orders to be completed. The white and transparent façade that differs from the environment outside was required, both as a statement and as invitation to raise the quality of the built environment. Park: In Refraction House (2021), you used a glass block to draw light deep into the building along an east-west direction. What kind of function does the glass block play in this project? Richard: Glass block as a façade is a translucent physical and metaphorical border installed to stress the idea that Tanatap Ring Garden is not a building, but a garden with amenities, wrapped within a structural glass façade that creates a real time silhouette of the activities happening both inside and outside.

Park: The first floor was designed to be dark even during daytime, which contrasts with the bright outdoor spaces on the second floor. I would like to know more about your illumination plan and your intention behind this project regarding light?

Richard: The open park of the tropics has the association of an abundance of light, which many take it for granted. Therefore, the entrance experience was designed so that the visitor would enter this semi basement experience on an intimate scale and the absence of an abundance of natural light. They would recognise that the view intersects at points through the skylight penetrating the space on a more intense scale, all with a gradual illumination increment until they reach a full open sky in the garden. 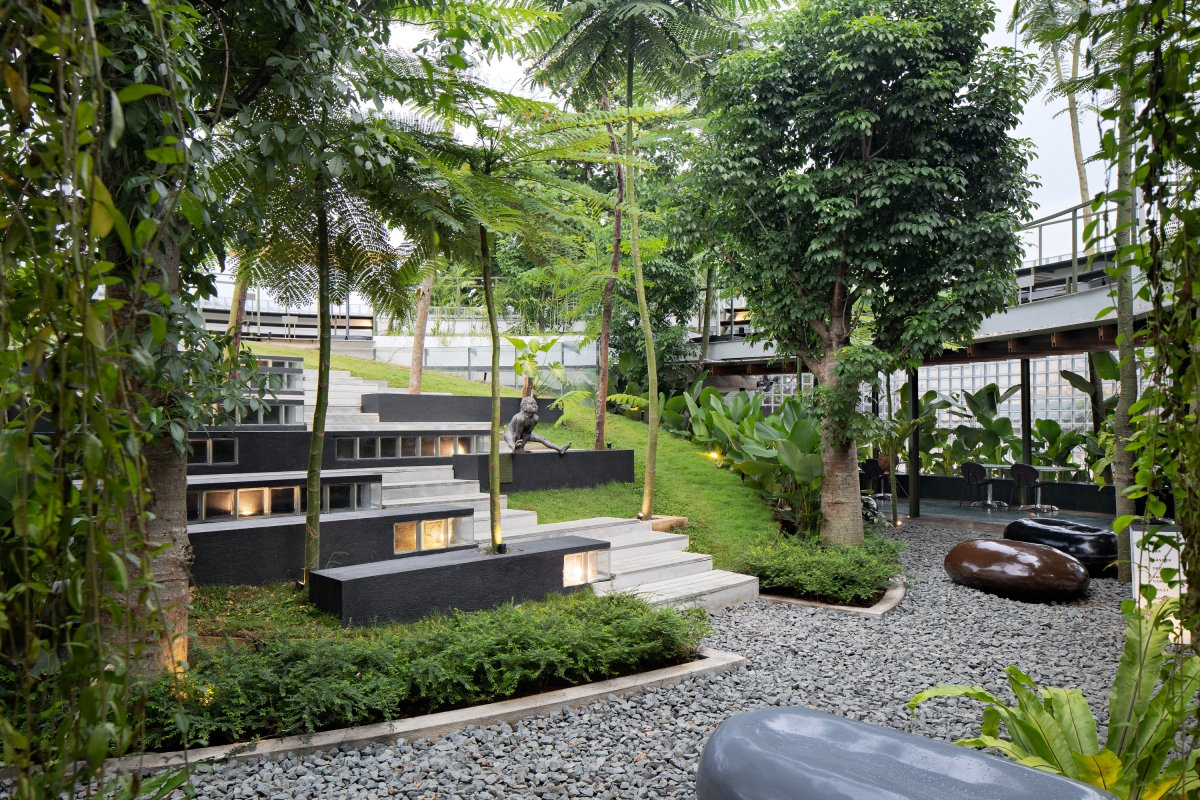 Park: According to your official website, RAD+ar explores and experiments to redefine the value of architecture in terms of both globalisation and localisation.

Richard: Living in the tropics is easy, for the majority it only consists of two seasons, the rainy and the dry season. Neither exhibit extreme temperature differences nor extreme water scarcity issues. Plenty of sunlight for natural lighting is also a common feature with this radiation. That means to achieve sustainability in the tropics is really the extent to which we can achieve comfort exerting as small an amount of energy as possible, that could be achieved in only a few steps such as ensuring we optimise all the passive strategy, blocking sunlight radiation, optimising wind velocity technique to reduce humidity, and so on. RAD+ar has come to the realisation that the tropical and subtropic country is the future. In 2050, it was projected that more than 5 billion and even half of the world’s citizens would occupy mega cities that are located in said area. I realised that if sustainability is the goal, it could never be achieved by a few groups of people, it has to be done sporadically and inspire many. A very simple statement, that is very hard to grasp for some people is this: It is very easy to achieve sustainability in a tropical belt environment, more and more people are concentrated in the tropics. Therefore: to ensure collectivity most people could make a bigger change, so we should seek to inform the tropic’s inhabitants of the various ways that architecture can be more sustainable and do less harm to society. Our practices can be focused into creating as many applications of said technique across various building functions as well as prototypes to inspire and to learn from, in order to apply such principles on their own terms. 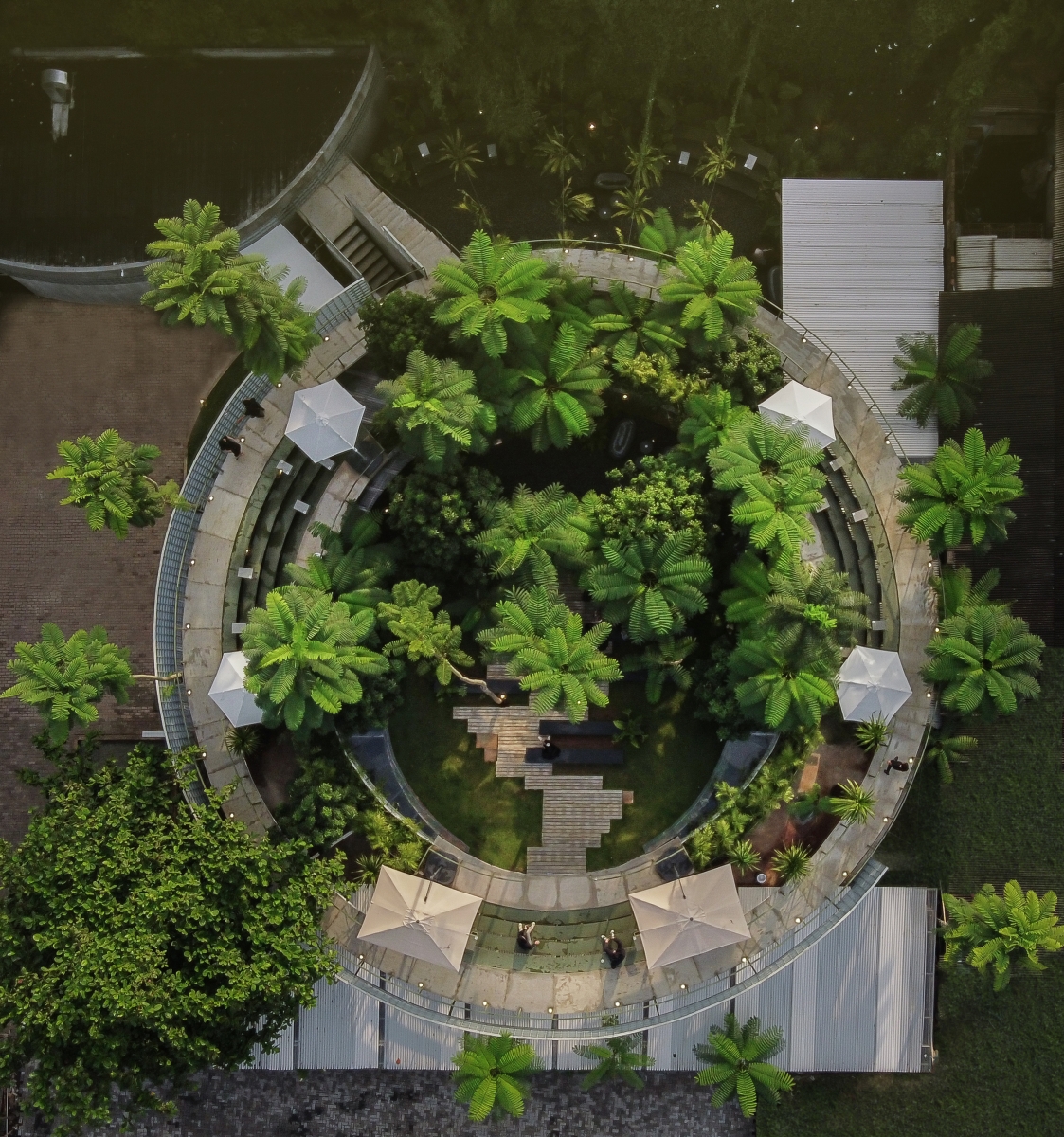 Antonius Richard Rusli
Antonius Richard Rusli formed RAD+ar which is a Jakarta based group in 2017. The name means Research, Artistic and Design plus Architecture. Opting for spaces that reach their maximum profit level and potential to create a provocative and emotive space is RAD+ar’s main approach to ensuring sustainability as a priority in design. RAD+ar is planning to contribute more to Indonesian architecture.