Why Do We Need an Association?: Preparing to Establish the (provisionally named) Korean Architects Association 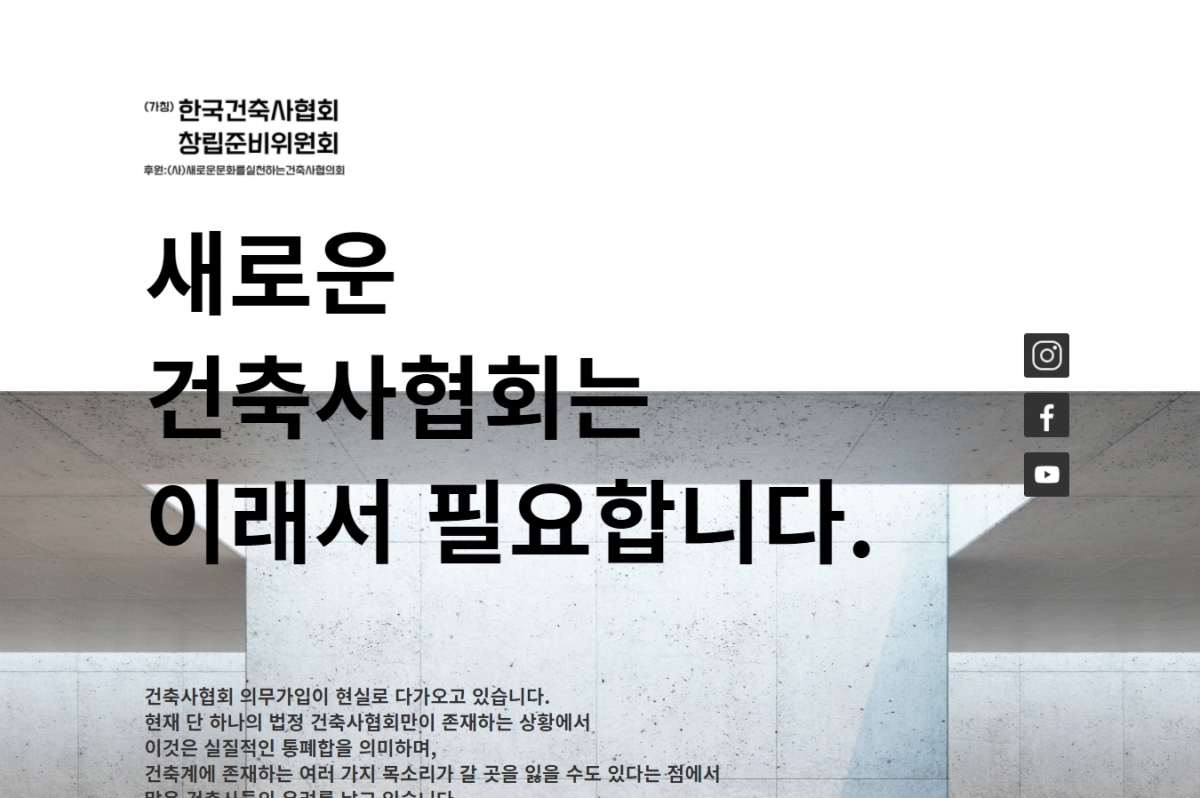 When the agreement between Ministry of Land, Infrastructure and Transport (MOLIT) and Korea Institute of Registered Architects (KIRA) was announced on the 24th of September, 2020, it sent shockwaves across the architectural scene. Several pending issues were immediately taken up as targets of criticism: mandatory membership of the association, the return of licensing system, and the reduced frequency of the architects qualifying examination. What is the role and reasons behind an association that presides over the Korean architectural ecosystem? SPACE interviewed Park Insoo, a member of the Preparatory Committee for the Establishment of the (provisionally named) Korean Architects Association, discussing the issues and topics that have arisen following the recent announcement.

Bang Yukyung (Bang): The (provisionally named) Korean Architects Association (KAA) began recruiting members from the 10th of January, 2021. I would like to hear about the background to your preparations for this foundation.

Park Insoo (Park): The Preparatory Committee for the Establishment of KAA (hereinafter Preparatory Committee) was assembled in mid-December, 2020. Mandatory membership announced by KIRA in September, 2020 was the catalyst; with the most members of all Korean architectural organisations, KIRA is the only Korean architects association authorised by the Certified Architects Act. Despite the rising calls for the examination of its role, KIRA has not changed in any significant way for over 60 years. They have enforced the revision of a bill to reduce the status of architects, and the voices of design-oriented architects have not been properly recognised under the shadow of being outnumbered by this group. Accordingly, we realised that we needed an organisation of equal legal status to collect various architects’ opinions and that would be able to speak out across the community.

Bang: The Korea Architects Institute (KAI), established in 2004, is considered an organisation of identical purpose. What is the primary reason for creating another?

Park: Strictly speaking, KAI is not an official association. A formal legal association must be established through participation of at least 10% of registered architects according to Certified Architects Act, but KAI failed to satisfy this condition and was set up as a corporation under Civil Law. As a result, even in policy making, KAI is not on an equal footing with KIRA. KIRA has continued to criticise KAI as ‘an elite group’ and in ‘a league of their own’ since its establishment, but I think it is so-called ‘frame’ in order to strengthen their union. Nonetheless, some changes are emerging in the architectural circle. Architects have been produced within the recognised framework of the ‘5-year curriculum – practical training – architect qualifying examination’. The mandatory membership of KIRA was abolished in 1998 and Korea Architects Registration Board (KARB) was established in 2012, which allowed many registered architects to work without an association membership. However, if the amendment proposed by KIRA is passed this year, about 6,000 registered architects without memberships will have to join one association. In that sense, I believed that young architects would need a new bottle to guarantee their independent activity. KAI is already 20 years old! I thought we need a new organisation that is different at birth.

Bang: Although it ended in failure, there was an attempt to integrate the three organizations—KIRA, Korean Institute of Architects (KIA), and KAI. What do you think were the major differences of opinion between the organisations as a practitioner who participated in the campaign?

Park: The big difference was the association’s identity. In 2014, while preparing for the unification of the three organisations, I served as an editorial board member and a legal committee member at KIRA for two years. KIRA gives priority to the survival of existing members. The mainstream approach is an establishment that gives priority to private interests. An ‘association’ is a group of experts with qualifications granted by our society. The discussion of the association should focus on the contribution made by architecture to society and the condition of good architecture, but driving forces based on the interests of the vested members could not narrow the differences of opinions on the pending issue, which resulted in the failure to integrate the organisations. The ‘designated supervision system by permission holders’ is a representative example. I do not think this is a law for architects who want to realise the value of architecture. Some advised us not to create another institute but to fight ‘within it’, and yet it is impossible when I think of the experience of being disregarded when deciding upon main pending issues.

Bang: You also pointed out the issues related to KIRA’s practices, such as membership fees that vary by region and interventions in project orders.

Park: What I still don’t understand is the issue of the membership fee. I don’t know why it varies from millions to tens of millions KRW by region, and the details of these expenditures. In some region, if you are not a member of KIRA chapter (branch), you rarely win a project in that region, and even if it is possible you have to bear significant disadvantages throughout the process of construction and supervision. It is regrettable that a cartel centered on KIRA is openly performing corrupt practices in taking care of one’s own family. This is the reason why we judged that the establishment of a new legal association led by architects is the only way to restore the architectural design market in a transparent and healthy way.

Bang: Of the amendments announced in September, 2020 through consultation of the MOLIT and KIRA, which issue was the most controversial?

Park: The contents of the current proposal include controversial issues regarding mandatory membership, the license system, and the architect candidates. In fact, these systems were already implemented 20 years ago. Most particularly, the claim to increase the number of architect candidates and revitalise the licensing system is contradictory. According to the current law, one can be qualified as an architect after completing designated education (5-year curriculumgraduate school of architecture, and so on), practical training (three years), and architect qualifying examination, and after obtaining the license, one can open an office feely (registration system). As a system such as this is established, architecture offices are finding it difficult to recruit staff members. This happens because the candidates (assistant architects) who completed 5-year curriculum tend to select offices for practical training when they apply. In order to solve the manpower shortage, they needed a reason for graduates from the 3 to 4-year curriculum course work in the architectural firm, and they have a plan to make them eligible for the architect qualifying examination. However, this is an act of denying the Canberra Accord (2008). This logic has no occasion to adhere to the 5-year curriculum that meets international standards. As KIRA argues, the increasing the number of the candidates will lead to the increase of the number of architects, that is, opponents to compete with them in the market. The measures devised to prevent this are to reduce the architect qualifying examination and return to the licensing system. Under this system, those who passed the qualifying examination (qualified as an architect) have to go through a certain period of education and interviews in order to obtain a license (licensed as an architect) to open their own office. Officially, they claim to prevent a surplus of architects and substandard qualifications, but the real intention of this amendment is to enable them to increase their office employees while reducing the number of practicing architects. I think KIRA’s attitude of raising the barriers to entry of young architects and adjusting the supply and demand of manpower to suit their tastes will eventually involve an architectural circle in a turf war.

Bang: Who is in charge of managing the affairs of architects?

Park: The mandatory membership system of KIRA was abolished in 1998 to prevent mandatory membership due to complaints about rampant corruption. Since then, the need for the management of registered architects emerged and KARB was established in 2012. Previously, architects could open their architectural firm by reporting to the authorities, but this has changed to a registration system. Of course, the intention was to properly manage assistant architects according to international standards. Then, this means that that the government (MOLIT) must strictly manage KARB—which is in charge of architects’ registration, license renewal, professional development such as continuing education and internship, and certification examination. However, it is KIRA that is currently in charge of the services. I think KARB, a public government-affiliated organisation that should present opinions on the same level as KIRA is not able to take a neutral attitude, because it is subordinate to KIRA.

Bang: How is the actual structure of KAA organised? What is the difference to that of existing organisations?

Park: Basically, our targeting group is much wider. Most members of KIRA are architects who are running their own firms, and non￾practicing architects are not interested in the institute. On the other hand, KAA consists of four groups: in addition to registered architects, experts such as overseas architects and professors, assistant architects, and students. We are planning to manage and communicate with all of the players that form the architectural ecosystem. In terms of an organisational structure, it is a completely different system from the existing national organisation. Now, KIRA has a hierarchical tree structure extending from Seoul (centre) to the branches (region). A branch is established in each local government, and it can be regarded that the association is under control of the authorities. In particular, local branches act as a proxy for the authorities on the basis of long-standing relationships. This would play the role of prompting unfair practices in the field of supervision, contract, evaluation, and ordering in the region. We conceive of a horizontal structure that encompasses urban areas around five metropolitan cities. We will give equal status to the centre and peripheral area without distinction, and the committees will be combined so that local members can participate in various committees. We will improve and equalise the quality and standard of architecture through this structure. A problem in a region will be discussed and solved through meetings involving members from all over the country.

Bang: What are your specific plans as a member of Preparatory Committee?

Park: The final goal of KAA is to ‘restore fair relations’. A healthy ecosystem will be established by securing transparency in ordering, construction, supervision, and evaluation of architecture. Currently, KAI is participating in the form of sponsorship of KAA. Some see this as a power structure, but the Preparatory Committee’s members who are working for the foundation will not take on positions in the future. The role of Preparatory Committee is only to provide directions for making the articles of association, electing the president, and the organisation. So, we haven’t established any specific plan as yet. The task remains for the working group who will decide and carry out activities. The primary goal is to establish a legal association by recruiting at least 1,800, 10% of the total 18,000 registered architects (Preparatory Committee statistics), in two years. Personally I wish to produce good results when structuring KAA and organising KAI.

The conceptual organisation of the (provisionally named) Korean Architects Association