DRAW THE WAY OF LIFE THE FILTERS OUT INTO STREETS: VILLA SASH

Walking around this neighbourhood, one easily finds examples of villas with a sash. The architect Kwon Taehoon drew the façades of the villas that have long evaded our attention because they are such a common sight in these surroundings, and compiled these careful drawings into a book. SPACE asks the reasons and processes behind recording these ordinary, familiar dwellings. 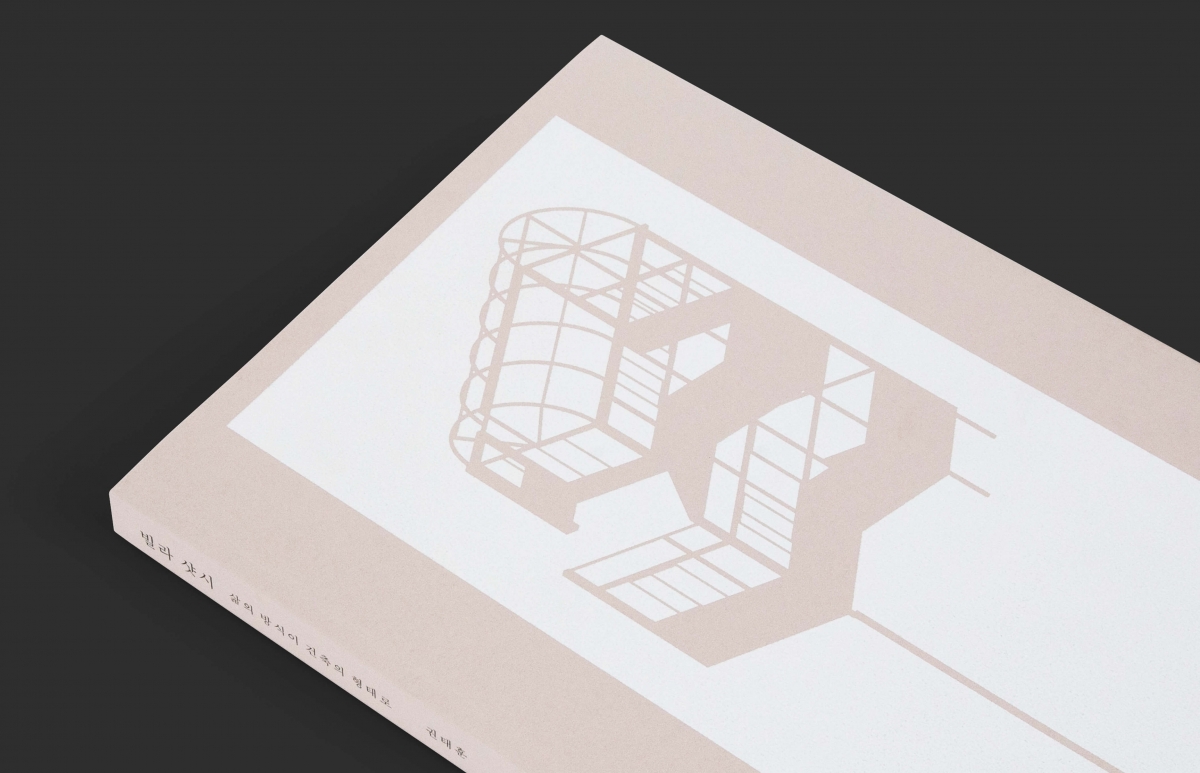 Kim Yeram (Kim): You’ve worked at JINA Architects, Beacon Architects, and Design Camp Moonpark DMP Partners, and have worked in ‘drawing research’ since 2014. How did you begin your work in publishing?

Kwon Taehoon (Kwon): While working at the design office, I often had to research examples suitable for projects, but it seemed to me that those cases held me back by repeating case studies. There was a strong feeling of becoming a consumer of reference points. Learning from good references is essential as an architect, but I have decided to commit my time to becoming a producer of references rather than simply an editor of overseas references. I wanted to adduce and interpret the many reference points to be found all around us, if we observe our surroundings with thought and care, rather than travelling abroad to glean new inspiration. In comparison, it seems that I wanted to find a well that would not dry up. At first, I performed both office work and draughtsmanship, but the time I had to work on both was limited and so I decided to leave the firm to concentrate on setting up a publishing company.

Kim: Kim: Villa Sash, your latest publication, focuses on villas that can be found in our local surroundings. What motivated you to observe this type of housing, and how did you assemble your impressions into a book?

Kwon: I lived in a villa for about 12 years. There was a boom in reconstruction in the town in which I lived, and I had the opportunity to visit various construction sites. Of the newly built houses, there was one place I really admired; I went there twice a day, so I saw it more often than the supervisor. (laugh) One morning, when the building was completed, I saw an illegal extension on the step-shaped balcony. I was very disappointed, because it was a building that I observed every day with such affection. Seeing the fate of villa, which had been blighted by this illegal extension, I became interested in surveying the building process and stipulations behind Korean villas.

Kim: You have collected examples and extracted keywords from them. This seems to be conducted from the point of view of critical observation as a typical method of inquiry.

Kwon: I think there is a difference between what I observe and the result of my interpretation. I dig into a building that has not been much discussed until now, other than its status as built by a famous architect. I also paid attention to the possibilities offered by drawing, which allows one to express the nature of the object in a completely different way, in terms of the instrumental aspect of expressing it, and to conduct experiments. I spent a lot of time unifying the thickness of the lines and the way in which they are expressed so that the dozens or hundreds of drawings in the book do not give off a different impression. Especially in the case of analysis diagrams, countless simple processes are undertaken to prepare as much information as possible so that even architects can easily understand them.

Kim: Several names are used to describe domestic multi-family/multi-unit houses such as villas, row houses, villages, and mansions. Why did you select ʻvillaʼ as your title?

Kwon: There was a time when I looked at the sash attached to the villa and thought about how I might chose to name this feature. It was difficult to explain it in simple sentences, so I thought I should name it. At that time, the compound word ‘Villa Sash’ came to mind. In Korea, the villa has two meanings. One refers to a type of classic western architecture, such as Villa la Rotonda, the other refers to an ordinary multi-family or multi-unit house in which many people live under one roof. It was appealing that this one word could conjure up the images of two conflicting buildings. Because of the ambivalent nature of this word, the compound word ‘Villa Sash’ means ʻvilla with the name “sash”’ and so ‘sash attached to the villa’ at the same time. (laugh)

Kim: Why did you concentrate on ‘sash’, not focusing on other attachments of villa?

Kwon: People living in these villas have expanded their living space with the aluminium sash, as well as acrylic and sandwich panels. Strictly speaking, the part made in this way is an illegal extension, but thanks to its easy construction, it has become a common element in these city dwellings. Although a specific vocabulary was required to salute all of its illegally extended structures at once, the aluminium sash was actually used not only for window frames but also for many other elements. The word ‘sash’ also has a number of different pronunciations and spoken conventions such as /shatssi/, /shassi/, and /sassi/, which is also interesting. In the end, I chose ‘sash’, with the pronunciation that best matches to my tongue. 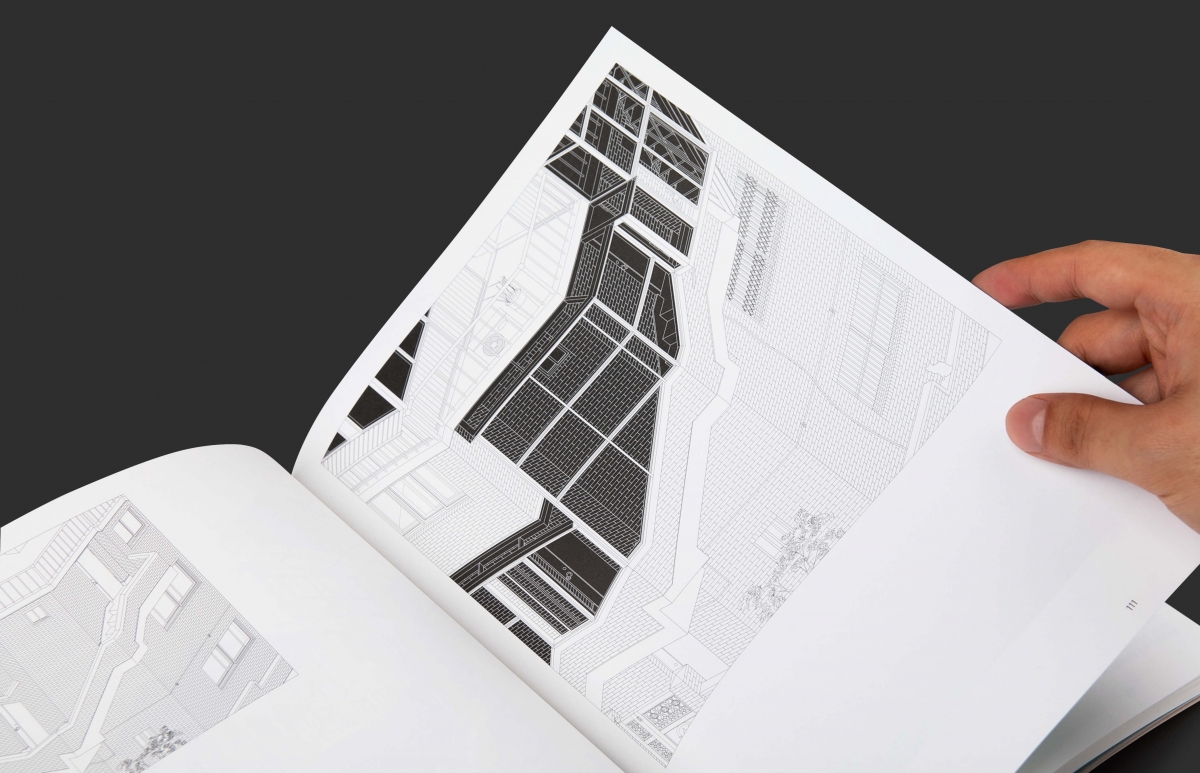 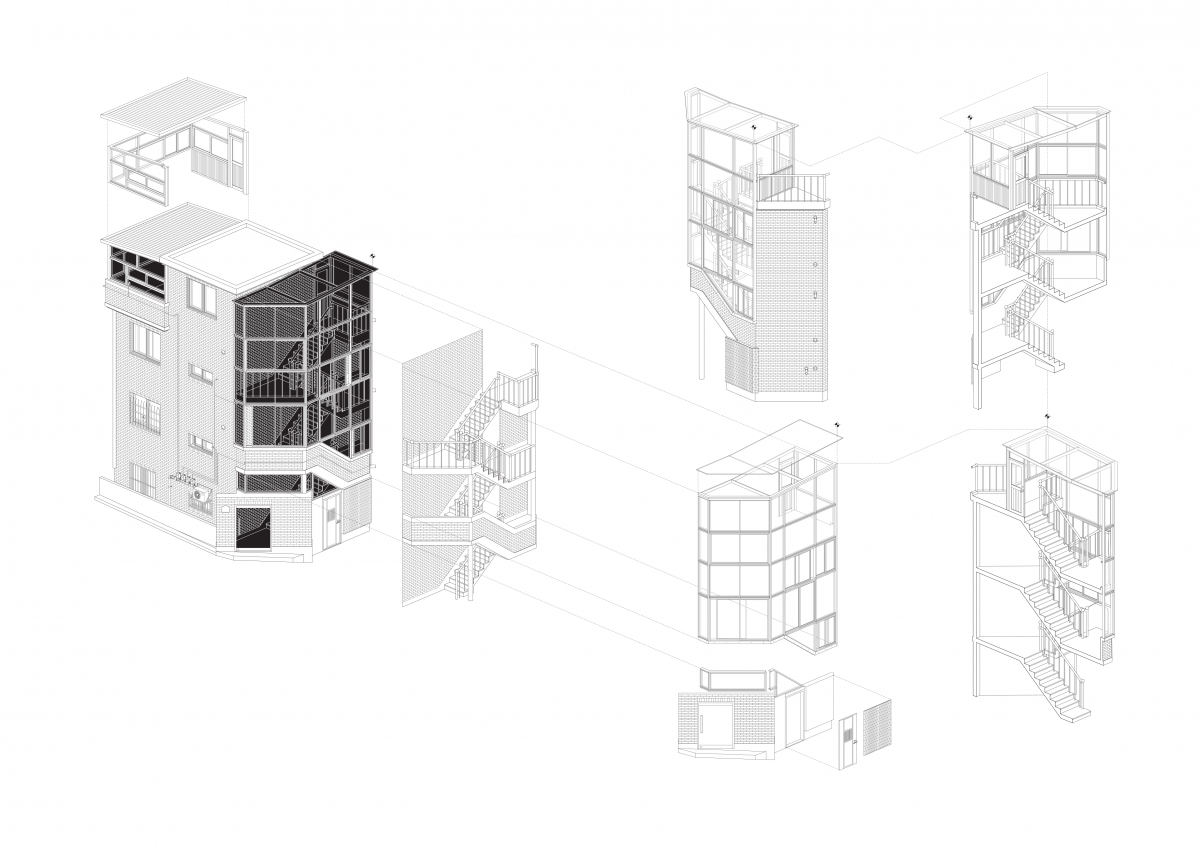 Kim: To describe these buildings in detail, it seems that they must be measured. Since the villa is a house in which several people live, is it not really challenging to measure it?

Kwon: Since privacy is essential in any home, it is difficult to really see inside. If I was to check the dimensions of the sash with a tape measure without alerting those inside, I’m sure the residents would call the police! (laugh) Unfortunately, I cannot convey much information about the floor plan when drawing the building’s elevation, but I try not to be depressed what I cannot see. The elements that can be assessed with my own eyes, such as the number of bricks, are carefully recorded, and the proportions and shape are adjusted based on these details.

Kim: Even if you know the exact dimensions, there is a minute margin of error when drawing. How do you solve that?

Kwon: No matter how objectively you record your information there will be some inconsistencies when assembling the data. When drawing the parts that I cannot see, I depend on my imagination. Imagination is one of the attractions of drawing, quite apart from the activity of surveying. I fill the gap between my errors and reality through the imaginary landscapes that seem to express themselves in these locations. For example, a rubber basin, flowerbeds, a sun-dried chili pepper, an unused ladder, or a stray cat on the roof of a house.

Kim: As the range of means for publishing as individuals increases, many people are recording aforementioned microscopic elements. Records created through such phenomena could be used as historical sources.

Kwon: It seems that there is an environment in which you can collect, organise, and give meaning to data in your own way. Thanks to that, the city’s appearance, which was not thought to be functional until now, is gradually being documented. The characteristic of this voluntary research and publishing project is that the history of creator is behind it. The records of daily lives are warm that cannot be seen in professional reports. If people look back these records 50 or 100 years later, it will be more interesting to see the city life from the past in a vivid view.

Kim: As a sequel, you are preparing the book named Tower Villa Project. What kind of story do you hope to tell through this book?

Kwon: Previously, the gap between reality and drawing was filled with a little imagination in Villa Sash, but Tower Villa Project relies solely on that imaginative power to design the tower. The tower, which built Korea’s multi-family houses in chronological order, from the past to the present, combines various references borrowed from the buildings observed in daily life. Tower Villa Project is the consequence of a more profound inertia experienced by the architects who have been trained to produce output upon receiving input. Perhaps the desire that cannot be sated through construction is expressed in the form of paper architecture. I want to expose the essential ambivalence of the word ‘villa’, which appears in Korea, through an architectural method. Specifically, this ambivalence can be contrasted with ‘Classic Western Architecture’ and the ‘Vernacular of Korean Modern Architecture’, as clearly demonstrated in modern Korean cities.