The Korean Catholic Martyrs’ Museum, finished in 1967 under the design direction of architect Lee Hitai, is a building that was finished in meticulous fashion with a contemporary architectural interpretation of Korean traditional architectural aesthetics. The noticeable protrusion of the eaves and the elegant roof lines are always visually pleasing.

The Museum has played its role as the most important place that stands as witness to the history of Catholic Church in Korea. Throughout its existence, it has undergone a number of remodeling constructions to upgrade its facilities and exhibition spaces. As the number of visitors surpassed 300,000, it came to the point that a fundamental reorganisation of the original museum was an pressing matter.

When I began the renovation project in 2018, the first things I inspected were the limitations and the latent possibilities of the existing museum. Due to the lack in exhibition space, the collections could not be fully represented or exhibited, and special exhibitions had to be held in the permanent exhibition hall. In line with the exponential growth in the number of visitors, circulation had become increasingly congested. Moreover, in comparison to the original design, the ceiling height had been lowered to a noticeable degree in order to secure space to house the HVAC system and firefighting equipment. The dark-tone of the finishing material within the interior spaces also largely diminished the more voluminous experience of sense of space originally held by the museum.

The more I looked into the structure’s present conditions, the greater the number of things requiring new solutions. However, this did not mean that I could simply enlarge or expand the building; rather, I had to resolve all aspects within the scope of the given volume. What was fortunate, however, was that the museum’s original framework structure was still intact; for us this formed a latent possibility, and we believed that we could begin our work from that point. 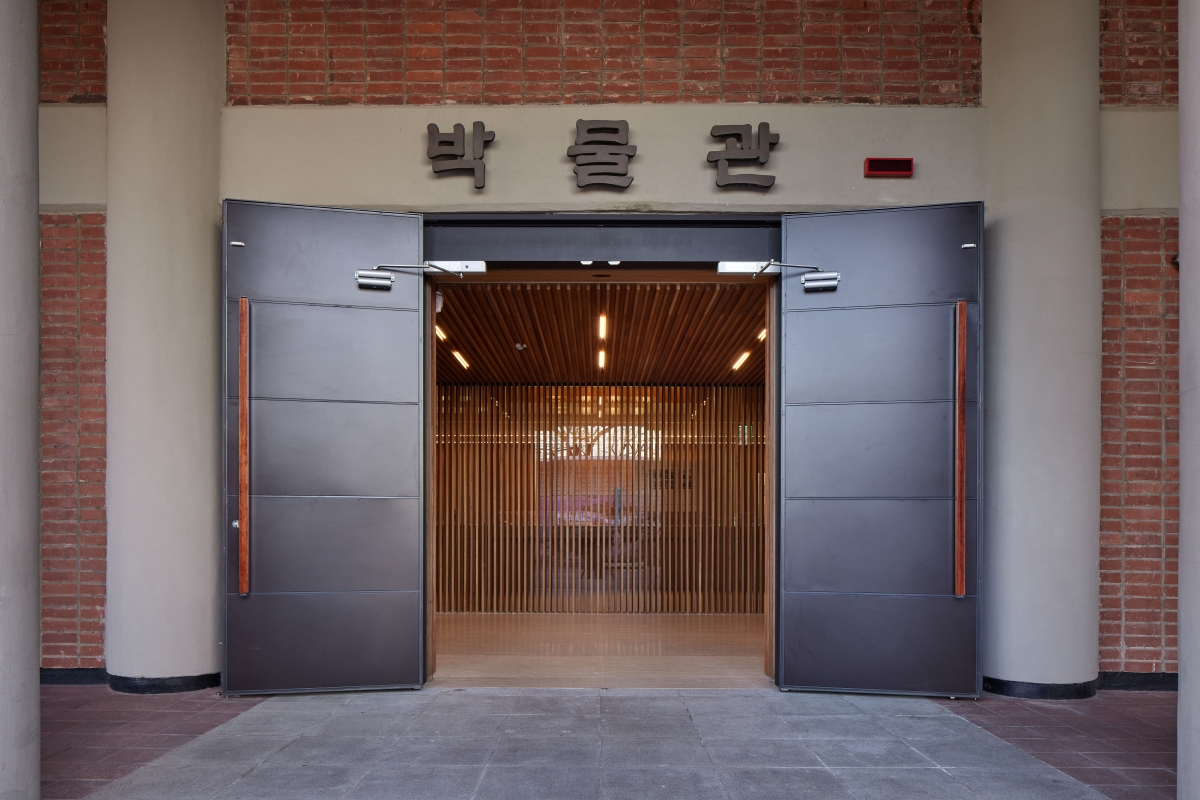 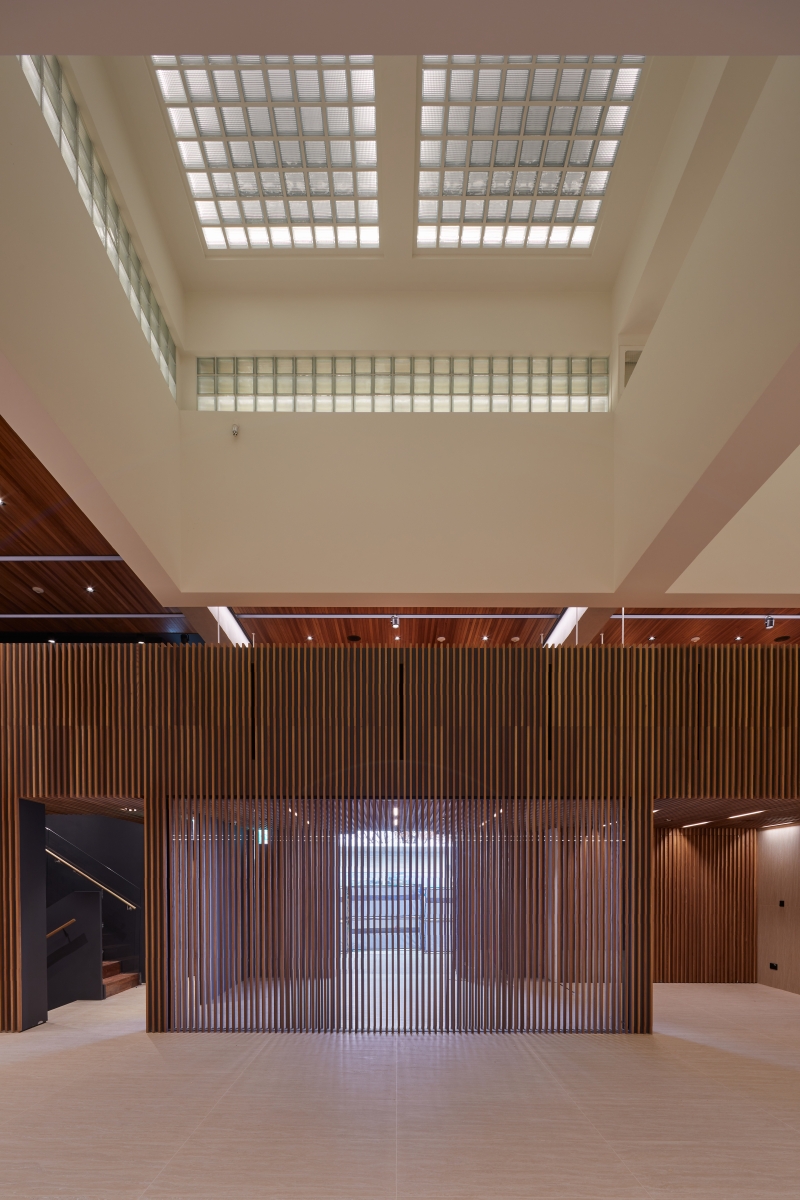 First, we began by reducing what we could. We made an arrangement with the museum office to take out the collections that bore no relation to the museum. We removed the staircase that had been added 10 years ago, in order to secure a new large space. As a consequence, the exhibition space was doubled by securing the space originally occupied by partitions and staircases.

However, securing this additional exhibition space area was not enough: we also wanted to improve the quality of the exhibition space. While reviewing the floor design plan of 1967, we discovered that a significant ceiling height could be secured by opening up the original ceiling. As the ceiling space was filled with the facilities for the running of HVAC, humidity management, and fire-prevention equipment, we had to devise a special facility system to that would make the most of this ceiling space.

We were able to secure the ceiling space by rearranging the ventilation and other facilities along the vertical wall. A large volume was created by removing the ceiling and exposing the structural framework. The framework’s pattern breathed new life into this space; the long-hidden skylight revealed itself brightly like an miracle casting its light throughout the space.

Exploiting the ceiling height, we decided to hang a mid-floor bridge that would encircle the exhibition space. The circulating bridge not only created an additional exhibition space but became an elegant spatial device in and of itself.

In the basement exhibition space, we removed the unnecessary partitions, staircases, and the suffocating level of the ceiling. The ceiling’s framework structure, which was exposed for the first time, added a new sense of rhythm to the space. The most welcome new addition was the fact that we now had a separate, wide, tall, and well-lit special exhibition hall.

The inner concrete framework in the original construction of the museum in 1967, which had long been obscured, was revealed to the world for the first time through this renovation project. The museum’s framework was not merely a support structure; rather, it had the potential to become part of the exhibition space itself. The structural framework, finally exposed to new eyes after 50 years, added a vibrant and beautiful aspect to the exhibition space. 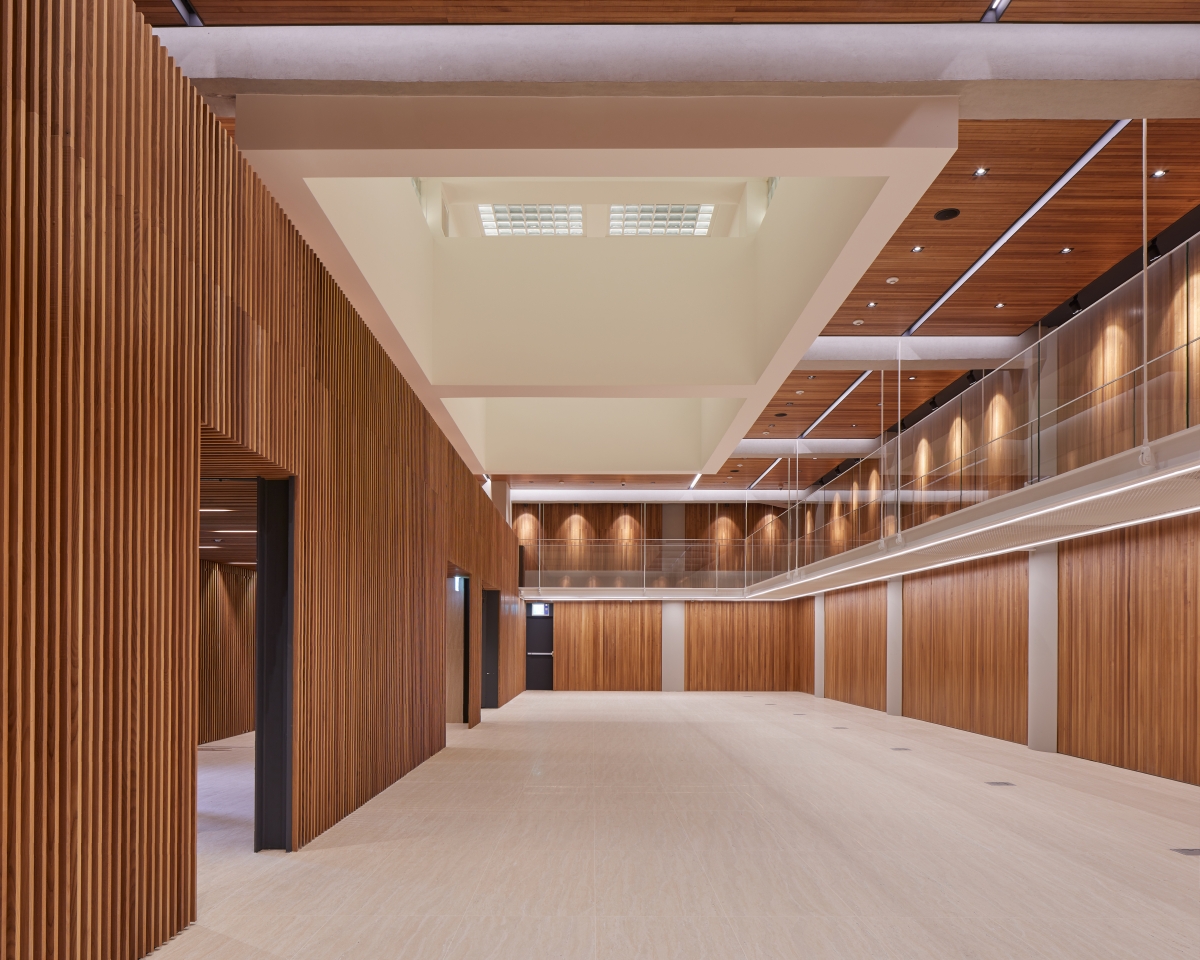 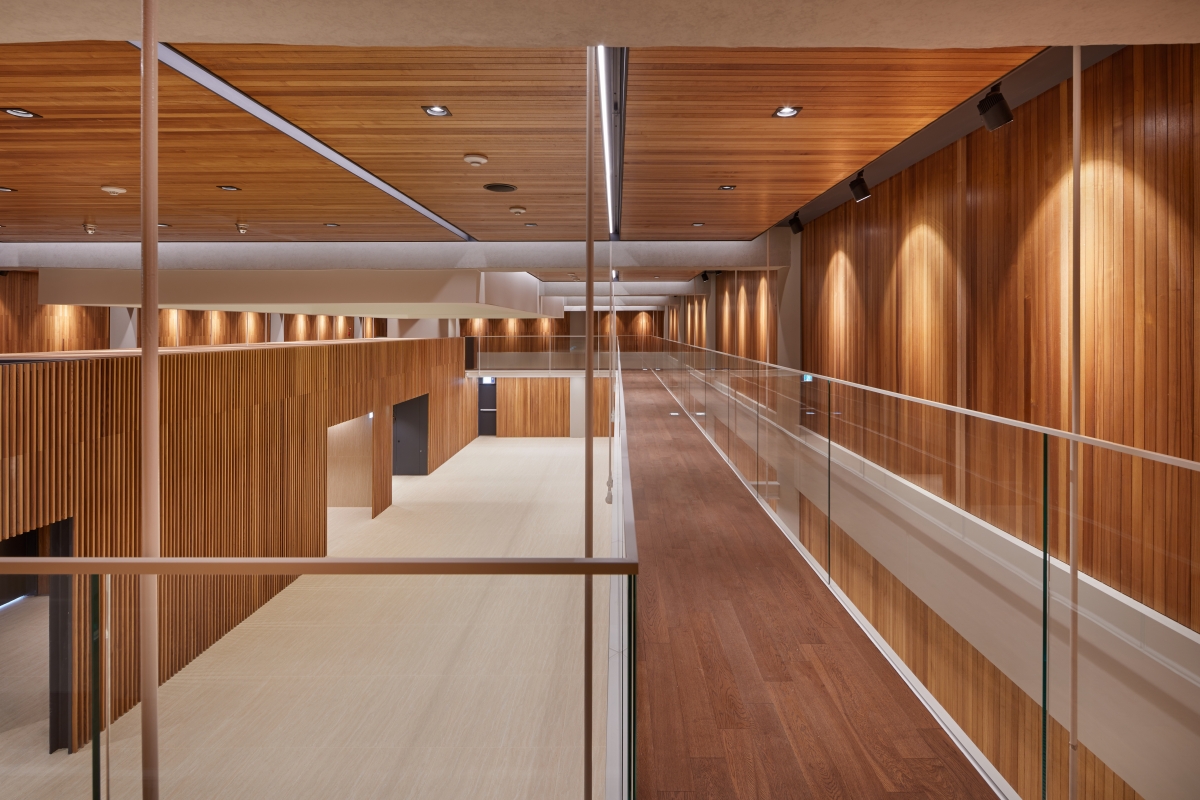 We achieved our desired spatial scale by emptying and expanding the structure. However, this emptied-out, wide space demanded to be filled with content. The museum’s content is largely governed by its exhibitions, but the narrative of this architectural space also now serves as a core content feature.

Upon entering the Korean Catholic Martyrs’ Museum, one steps into a welcoming entrance space. Across the reception desk, behind the wooden louver, the museum’s exhibition space can be seen at a distance. As one passes through the entrance space into the exhibition space, one encounters a wide space with a tall ceiling. A large skylight shines light down from the center of the ceiling, overwhelming the visitor with its beauty. This light descending the heavens could be interpreted as an image of the divine calling to martyrdom, filling the entire space.

Warmth-inducing carbonized wood was used in a spatial framework composed of columns and beams as well as fillers in between. The vibrant rhythm of the framework and the warm wooden texture create a nuanced spatial experience. The contrast created between taut metal tension rods and extremely thin and long wooden elements brings about an atmosphere of tension and solemnity. The precious stigma attached to devotion ranging from a carefully handwritten letter to a timeworn bible exhibited in this space stand as testaments to the history of the martyrs.

Towards the end of the permanent exhibition hall, there is a staircase that leads up to the circulating bridge. It is a stairway to heaven. Just as martyrdom is a leap of faith, the staircase leading towards the skies communicates a kind of spatial leap. At the top of the stairs, one encounters a track-like bridge that encircles the walls of the permanent exhibition hall. The bridge hanging on the roof floats in the air and offers the sensation of being lifted from the ground. The visitors experience in this space both the real and the supernatural at once. The act of walking on a path suspended in the air is the most significant experience staged by the museum.

As the visitors look down from above at the collections in the permanent exhibition hall, they have a chance to reflect on the history of the martyrs, and by following this orbital path they can mediate upon the meaning of martyrdom. Using the staircase and the circulating bridge as means, the pilgrimage is composed of ascending, passing, and circulating, enhancing the temporal and spatial character of this journey.

Having seen all the exhibitions, the visitor is then led to the newly-built exit located under a canopy. The warm wooden wall envelops the final space with its gentle atmosphere. Upon opening the doors, one is led to the museum’s external corridor where one can enjoy the full panorama of the holy site below. As one passes along the corridor, one winds back to the present; the Jeoldusan Martyrs’ Shrine (Jeoldusan) peak covered with pine trees, the glistening Han river, and the stoutly-standing statue of Saint Andrew Kim Taegon come into view. The present holy site comes into view and the history of its martyrs experienced in the museum merge between these times and spaces. 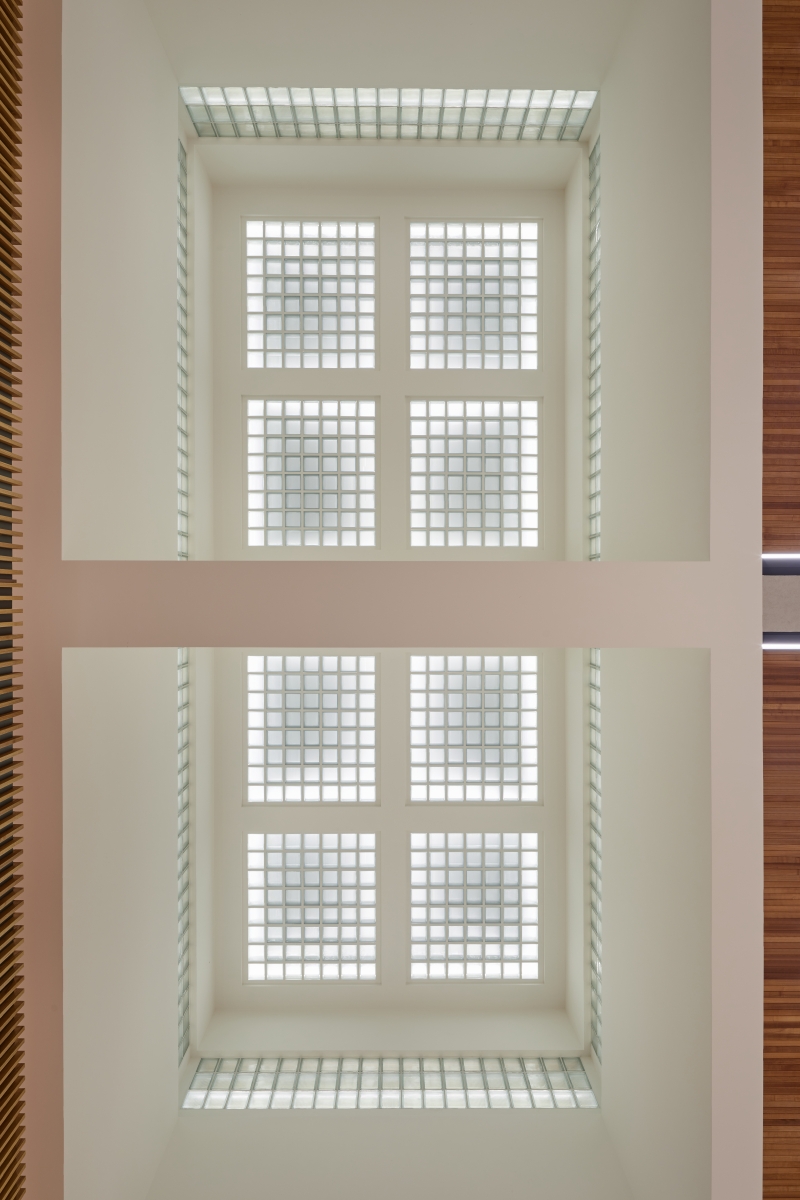 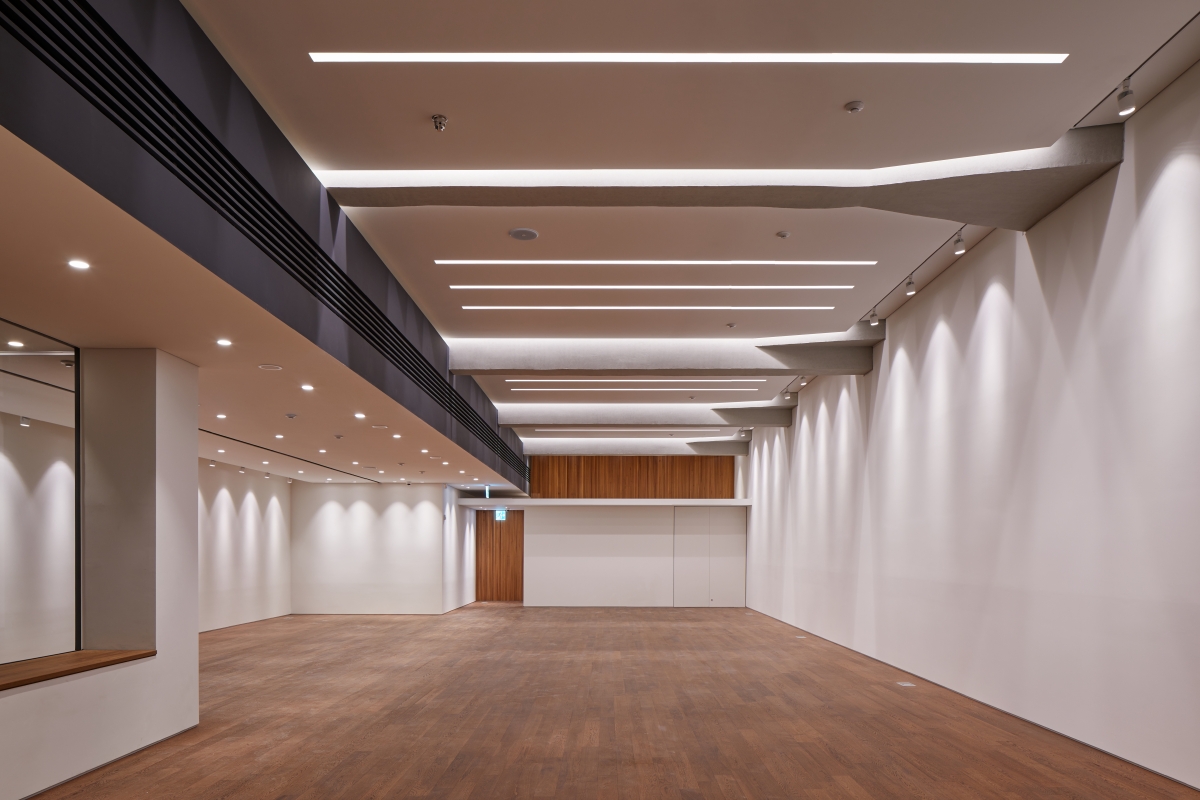 A Space That Has Become Time

My first acquaintance with the holy site of Jeoldusan was in 1992 when I was surveying its surroundings to work on its masterplan. The holy site was not only cut off from Hapjeong-dong, due to the Gangbyeon Expressway that cuts across horizontally, but also vertically dissected by the Dangsan Railway Bridge. As in the history of Catholic martyrdom, the Jeoldusan holy site was also beset by many trials and tribulations. Rather than working on the masterplan, it was more urgent to restore Jeoldusan’s dignity as a holy site. I proposed to Seoul Metropolitan City the idea of sending the Gangbyeon Expressway underground and building a park above. With the help from numerous people, the design was fortunately accepted, and the holy site was able to restore a portion of its original appearance.

I was able to continue pick up this relationship with the Jeoldusan holy site 26 years later in Fall 2018, when I received the difficult and demanding task of renovating the Korean Catholic Martyrs’ Museum . I used the newly-discovered framework structure as the starting point for my design. The staircase towards heaven, the floating bridge, the brilliance of the light shining through the skylight, the rhythm of the framework structure exposed for the first time to the world, the wide and bright exhibition hall below … this new space came to us like a blessing.

The old and the new were drawn together to convey the history and narratives of martyrdom. History became space, and that space became a time, a story, and an event.