Dan Dan Dan House is located in an industrial area in Hamamatsu, Japan. The architect, Tsukasa Okada, intended the house to be private and not overlooked by surrounding factory buildings while at the same time retaining open indoor space. So the ‘families could maintain their distance while also remaining aware of each other’s presence’, he positioned the living room with a tatami mat in the centre of the house and installed translucent polycarbonate panels on the surrounding walls.

Choi Eunhwa (Choi): The Dan Dan Dan House is a house, but it is located in an industrial district. Unlike when designing ordinary houses in a residential district, there must have been certain elements that had to be considered in a different way. While taking account of the surrounding context, what were the elements you considered to be most important?

Tsukasa Okada (Tsukasa): Hamamatsu is the birthplace and home of many car companies and music equipment companies, such as Honda, Suzuki, Yamaha and Kawai. This project is located in an industrial area in a small district away from the city centre. It is slightly distanced from the residential area in the district. Most of the surrounding buildings are parts manufacturers for car companies. Their buildings are often taken the shape of large cubes with clerestories. Considering that one feature of the site is that it tends to be noisy because of proximity of the factories, it is important one retains an openness within the interior space as daily life cannot be as open to the outside of the building. The building had to be mostly closed off from the external environment. The reason why polycarbonate panels and the clerestory were chosen was that these features are able to maximize openness and luminosity within the closed internal spaces. 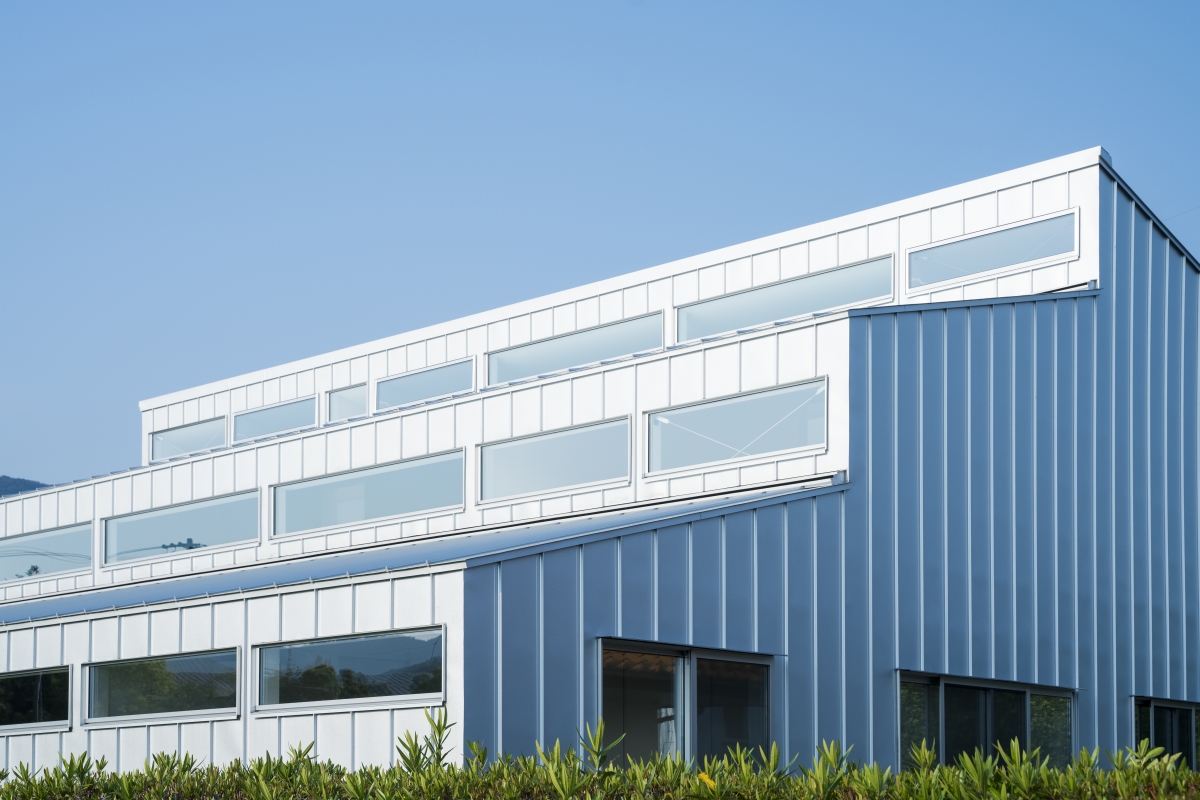 Choi: Seven people live in the building: a husband, wife, four of their children, and the mother of the husband. What did the client specifically ask for? And how did you architecturally respond to those requests?

Tsukasa: There are mainly two things required by the client: ensuring the privacy of each group and at the same time devising a communicative space between the two groups. The mother of the husband possibly needs to be looked after by her son’s family in the future. This determined where her space should be: near the entrance on the ground floor. The family needs more space than she requires since they have four children, and this is why they are allocated a portion of the house that has two stories. The core of the building, and the centre of the ground floor which is the main circulation flow of the occupants, was the best place for the common living room to support communication between residents.

Choi: It is impressive that the living room is a tatami room. What kind of value, known to Japanese contemporary architecture, does a tatami room have?

Tsukasa: A tatami room in modern Japanese society is often excluded from the main part of building. It tends to be used as a guest room or just an extra room. We think a tatami room should be more highly respected since it is a highly functional material that has an excellent humidity adjustment performance.

Choi: The tatami room is an empty space without a specific function or programme. When designing this home, how did you hope it would be used?​

Tsukasa: In this project, a tatami room is given to be the most important part in the house. It has six entrances and a spiral staircase, acting as a hub for the building to enable the overlapping flows between residents. The use of a tatami mat as a soft material helps to improve communication between residents—a certain cosiness makes users stay and rest longer in the living room. Usually, it is place to relaxation or a children’s playground, but sometimes it is used as party room. When their guests come round for a gathering or party, the door on the guest room side will be open to enable access to those spaces connecting each other. 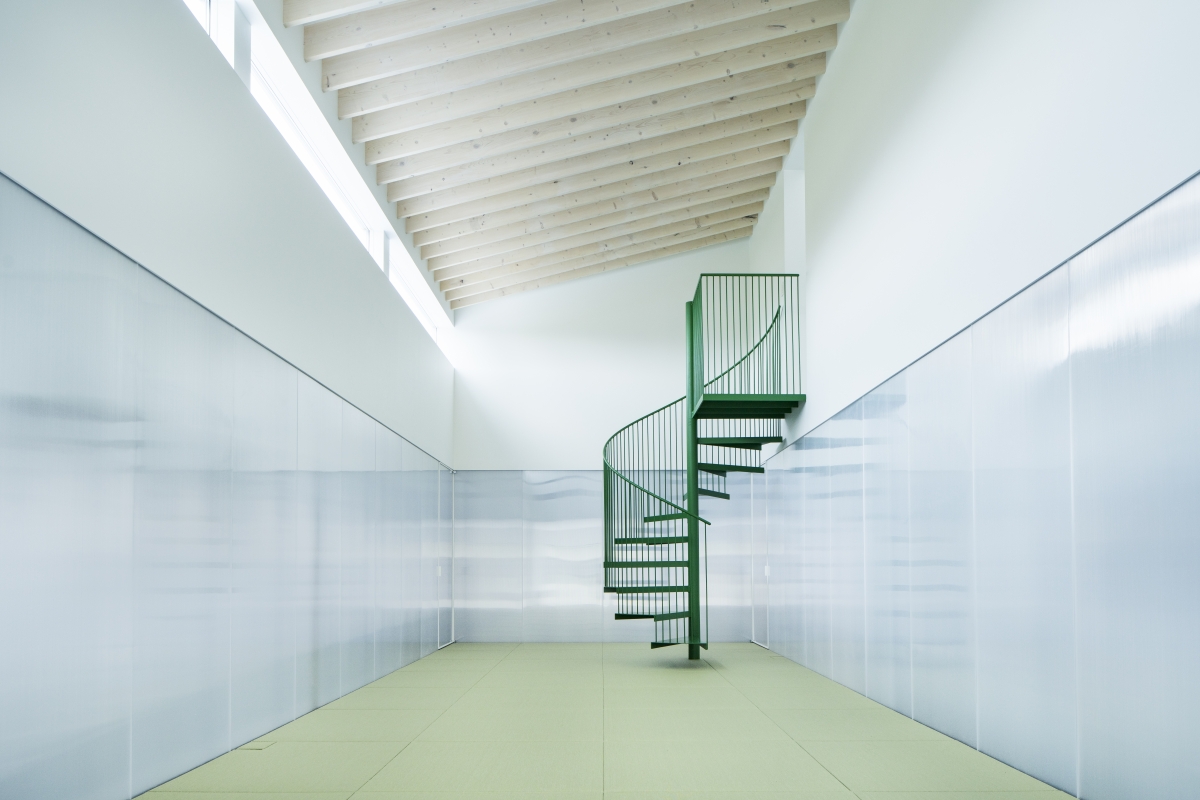 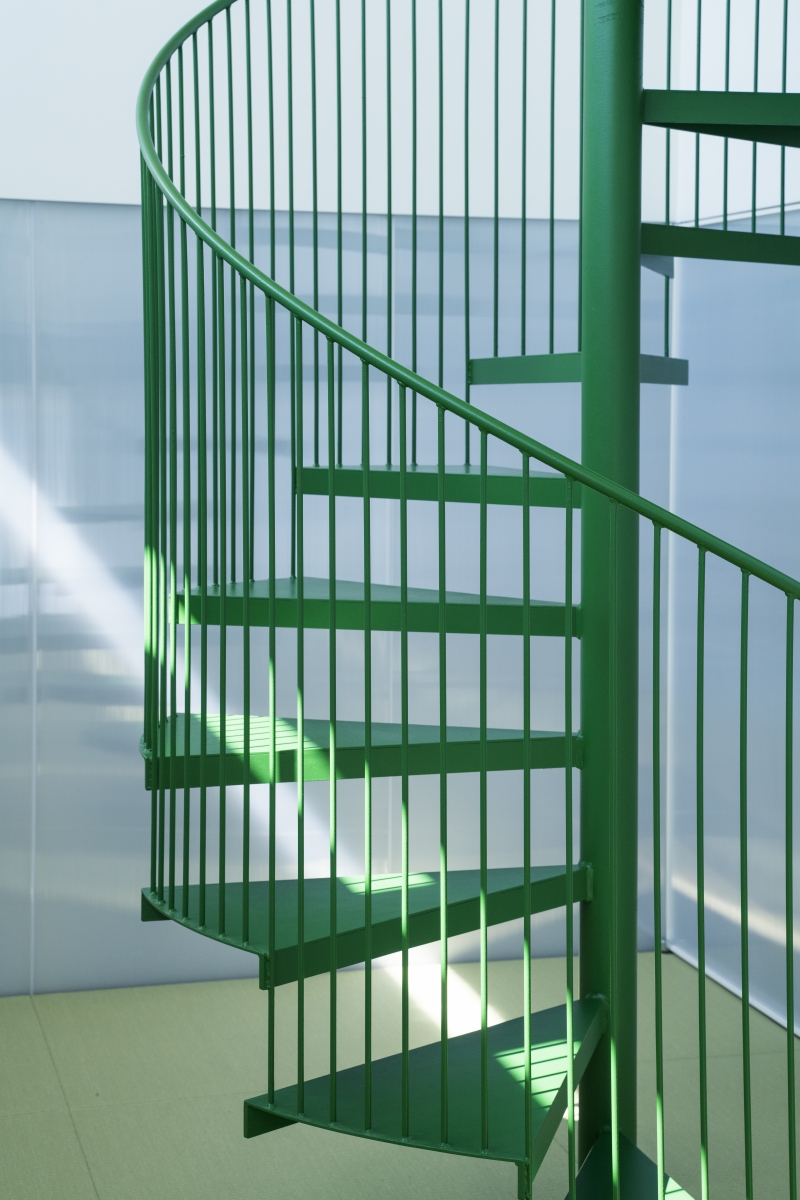 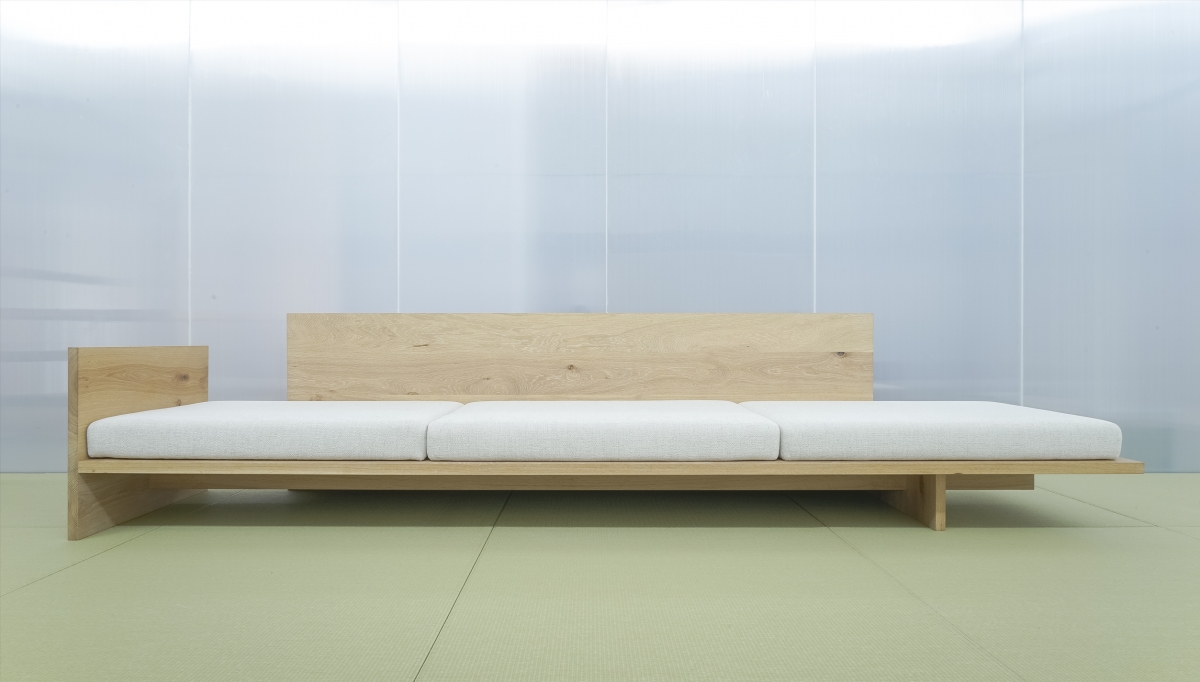 Choi: The combination of tatami room straw, polycarbonate panels, and the green spiral staircase feels heterogeneous. What made you collect these materials?

Tsukasa: The combination of materials is determined based upon their function in order to amplify the character of the building. It is equally important to give duality in the character of the space. Material is crucial because it helps to enhance the quality of the space. The materials must have function. For instance, the tatami mat makes the users comfortable and the space feel malleable. It can be a sitting area, a place to lie down, a dining space and a children’s playground. The translucent polycarbonate panels allow residents to feel as if there is someone behind them. It helps to improve visibility between the two groups occupying the space. I wanted to design the necessary distance between the families living in the duplex house.

Choi: The exterior material, polycarbonate panel, was used as a wall in indoor space.

Tsukasa: The tatami room in this project uses translucent polycarbonate material instead of an opaque sliding door that is a commonly used in a traditional tatami room. The polycarbonate panels are specifically designed for outdoor use, and it usually requires many bulky supporting structures. Although it was the ideal material in terms of optical effect, with regards to the construction detailing it had to be well considered in order to make most of the necessarily invisible structures. The fixed panels are inserted in the frame on the floor and the upper wall. This allows the structure not to rely upon vertical frames. You can only see a thin line on the frame from the living room side since the frames of the door uses L-shaped steel that exposes the minimum amount on one side. The surface of the panels became highly flattened because of the detailing above. Polycarbonate panels usually give a more industrial impression, and so therefore it is important that the wall does not have heavy or bulky structure so that it is less industrial and more elegant.

Choi: The walls made of polycarbonate are planned not to be entirely open; some are fixed, others can open. Even the opening type varies between sliding and hinged. Where did this difference originate?

Tsukasa: The door type was determined depending on the character behind the panels. The hinged door is installed on the traffic route while the others are fixed. As an exception, the doors on the guest room side are folding to allow for the connection of spaces on both sides.

Tsukasa: We simply could not find any sofa that maximised the functional aspects of the living room. That is why the sofa was bespoke. The tatami room is the assumed living room. Considering its position in the home, if there was no furniture in the living room the room would be more likely used as a traffic hub of the building. In this context, the existence of the sofa could spontaneously turn the space into place in which to stay and relax. It also enriches the life of the room by giving greater variation, which encourages occupants to stay. The seat height of the sofa has been kept low, at 300mm, which makes the ceiling height physically higher in order to enhance openness within the interior space.​ 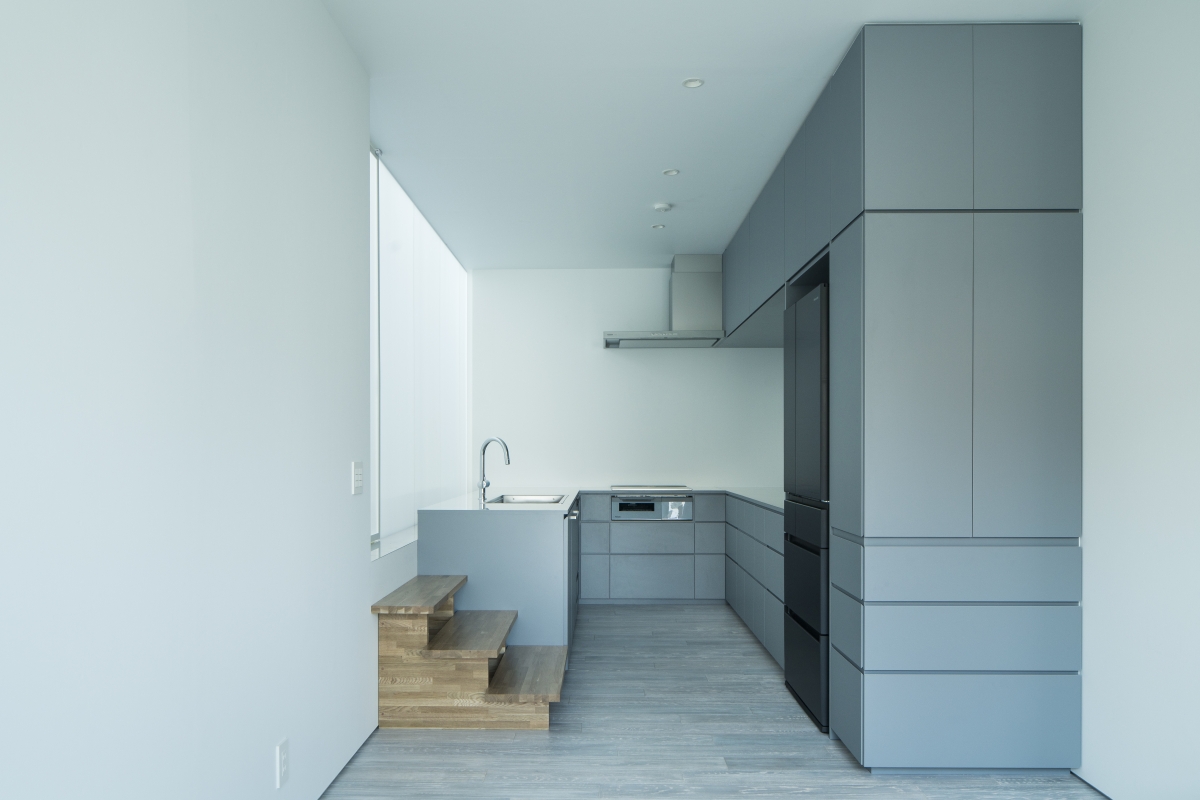 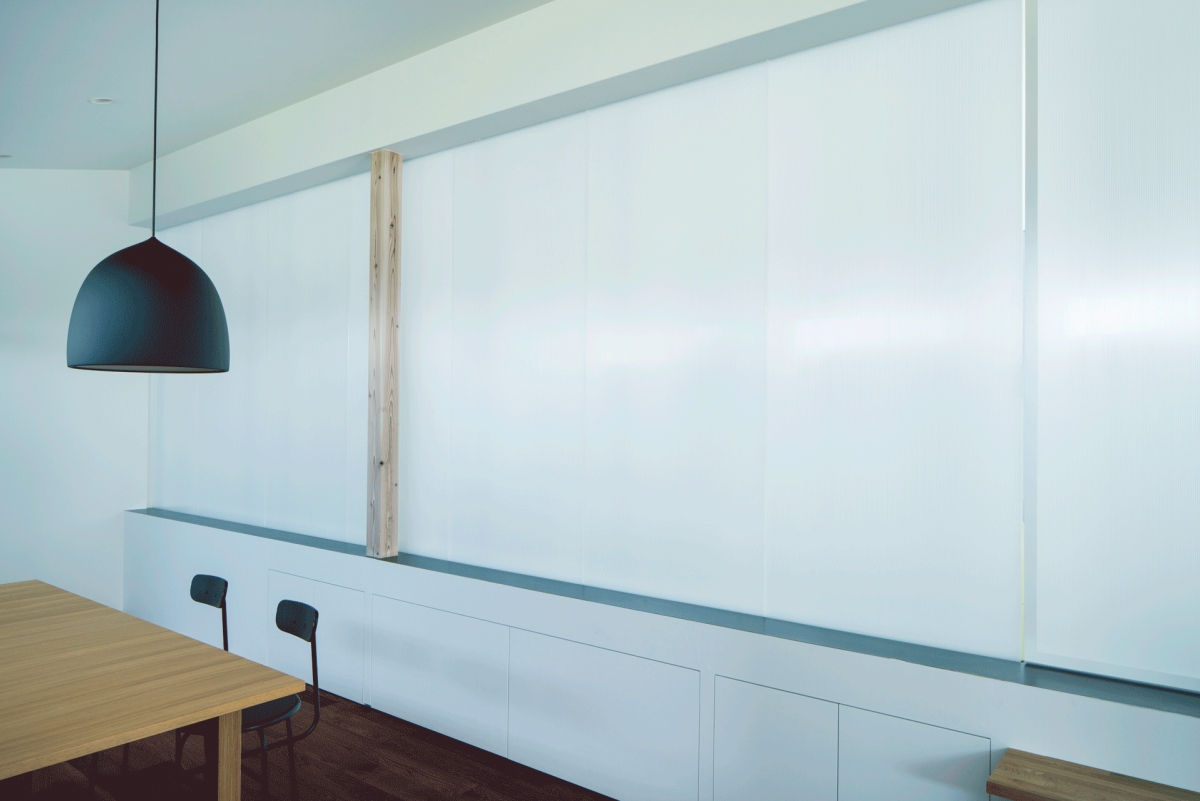 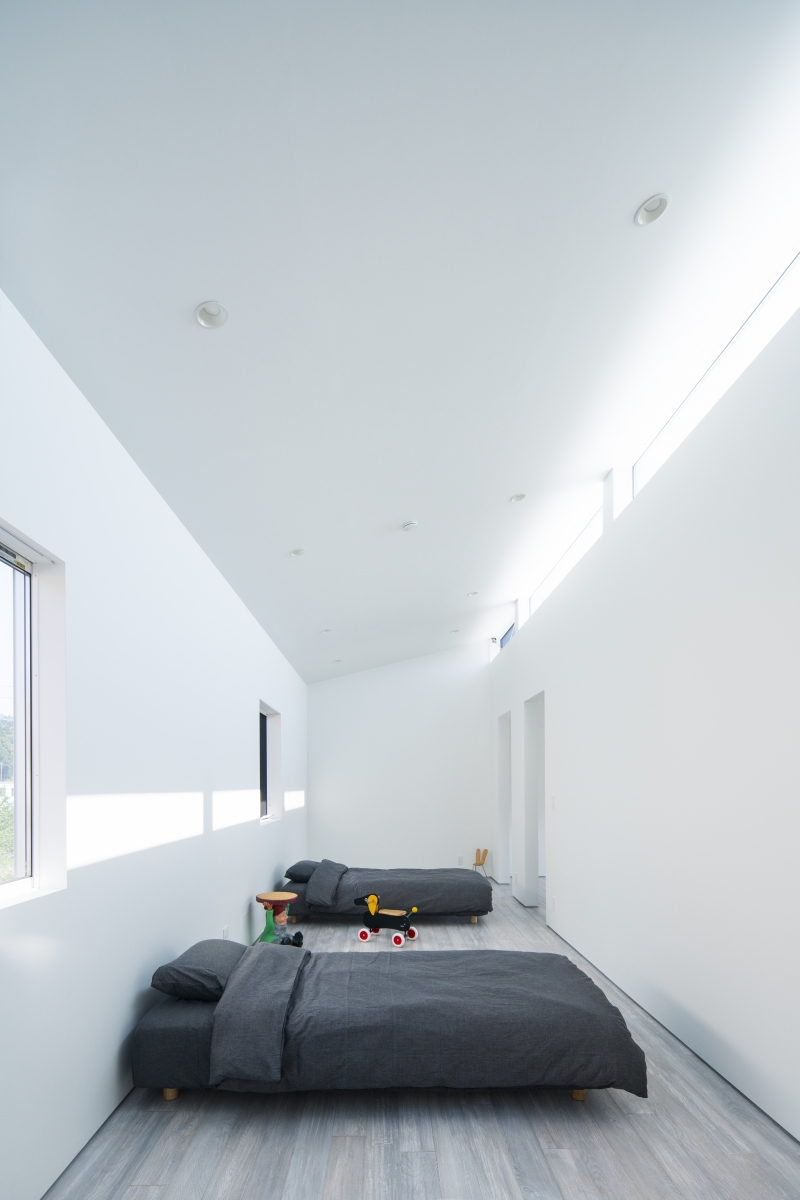