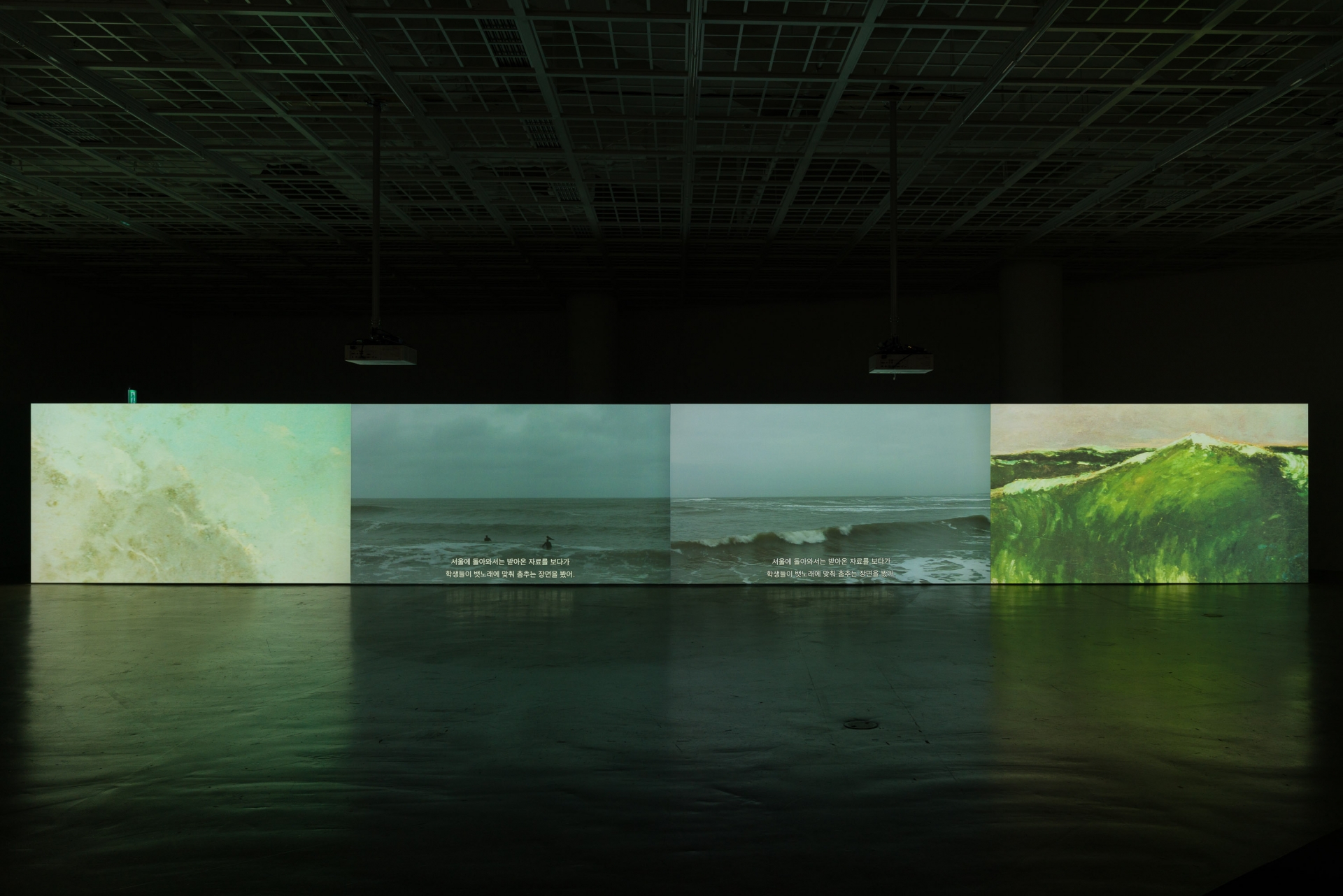 A narrative flows through images of the sea. Two people exchange letters, and the narrative focuses on their contents. They are talking about the ‘waves that would have crested 150 years ago’ in an oil painting by Gustave Courbet, the flow of now knowing where the ‘1000-year-old water settled under the sea’, and about ‘Seung-hee Choi’, a dancer who travelled across the waters during the Japanese colonial era. In this way, the movements of different rhythms, cycles, flows and time periods are superimposed and spectators are wrapped up within the wider atmosphere. This is ‘Mind Stream’, the solo exhibition of Hwayeon Nam, on show at the Art Sonje Center until 2 May.

According to the Art Sonje Center, ‘the exhibition is based upon the artist’s research into the dancer Seung-hee Choi between 2012 and the present, and the journey of reflection prompted by this research’. This interview was conducted to gain greater understanding of the artist’s thoughts about the exhibition, and due to the spread of COVID-19 it took place over telephone following a preliminary questionnaire.

Lee Sungje (Lee): You have presented your work on Seung-hee Choi over several years. What caused you to take an interest in this person?

Hwayeon Nam (Nam): Before I began researching her, I knew a great deal about this cultural figure. Her tragic life history and renowned turbulent periods were well known, and even now they remain widely documented. However, I wanted to know more about her actual work actual artwork. The first time I dealt with her in my work was when I participated in the 2012 Festival Bo:m. At that time, I paid attention to the relationship enacted between performance and the archive. I think performance archives are always incomplete regardless of how I approach them. Still, I endeavoured to reverse this premise, wondering whether an archive could exist as a performance itself by ‘existing in time’ or as a kind of ‘unfolding in time’. At the time I made an intentional effort not to focus on the conflicted character of Seung-hee Choi, but it seems that this was always a burden she had to face.

Lee: The Mind Stream (2014), exhibited at the time, depicts the dance notations of Choi using only a few photos of and a critic’s brief texts about her performance. It was an interesting challenge to attempt to reconstruct this three-dimensional performance using absent notions and flat records. This feels similar to an attempt to restore a building using only photographs and writings.

Nam: In a short article left by a Japanese critic, there was mention of ‘two people dancing to Tchaikovsky’s Andante Cantabile’. Since specific truths about the original works are not sufficient enough for anyone to speak confidently, there is room for errors or detours to intervene as the records are converted into the prerequisites for creation. I would not have been able to approach in this way if I had been a researcher dealing with records as empirical data. It is almost impossible to verbalize the developmental phase of an artwork.

Lee: The museum uses terms like ‘reconstruction’ and ‘interpretation’ to explain the exhibition. These emerge from a different context from the empirical nature of the work, which is expressed by ‘restoration’ in the sense mentioned in the previous question.

Nam: It is not about restoration. I liked the mention in the preliminary questionnaire: ‘As many time periods intertwine, I received an impression of something new unfolding, not of an archive simply about Choi or the artist’s works’. The fact that they existed in such an enmeshed state was intentional, particularly for the exhibition on the third floor. All the works on the third floor are titled after Choi’s work, except for one.

Lee: To work on Choi over such a long period, it seems as if there must have been other motivations besides the fact of the incompleteness of the record. Was there a fascination with the character of the artist, or a yearning to better understand the character?

Nam: The records about her and her works seem to have been both the object and medium for me. The beginning would be in my curiosity, never in yearning. On the one hand, it seemed that my use of the archive moved between the object and the medium, and eventually acted as a reflector. Any other force besides the imperfection of the record could be a conflict between two individuals, artists, and time and form. There were many questions during my work and research process.

Lee: What questions did you bring to the archive?

Nam: What comes to mind right now is her pro-Japanese activities, which are well-known. (As I researched this) I thought about what it would have been like to live and work from various angles while making compromises, and pondered my own artistic ambitions and personal conflicts.

Lee: As I walk around the exhibition, questions emerge about the relationship between performance and the archive: the collecting and researching of one’s materials, a performance that is re-enacted based on the stage, videos and still images recording the performance, and the act of archiving performance records in an accurate and faithful way. In other words, one will see a performance in the narrative flow of the show leading through preparation, performance, recording and archiving. What is performance to you?

Nam: For me, performance doesn’t necessarily go through the body but is a series of moments in events, the inflexion points of time, and the paths between them. For example, when my personal records and works were placed on the third floor, there is a sense of time and the physical body that has been interwoven in a strange way with the records of Choi. In other words, two artistic subjects, two works branching from one title, and two overlaid times layers. In this state, it is difficult to tell where the archive and the performance lies or ends, and I think the audience can also pass over the performative moments depending on how they move and what they encounter.

Lee: Mind Stream (2020) and Larger than Life (2019 – 2020) are installed on the second floor of the gallery. If one watches the video work Larger than Life, one’s attention is directed to the lighting of the installation Mind Stream as it turns on and off.

Nam: There is a moment when the sound work installed in the corridor can be heard, at a high volume, while watching the video. I intended to create a moment when the two works would meet and merge, and to ensure the audience can acknowledge that moment. Mind Stream was first created in 2014, and it was developed in a different way to that of 2020, which is also the title of this exhibition. The space-time created here is both the exhibition and a work in itself, but the significance of ‘flow’, of movement that is not stationary, is critical to me. So I wanted the works on the second and third floors to be in a liquid state, large and small, with all the works connected to each other. I think that this is informed by the appearance of the seas in Larger than Life. Everything is mixed, including real seas, a sea drawn in a realist style, the sea traversed by Choi, the sea as an object, the sea as experienced by the body, and the sea as a crucible in which huge cosmic forces act upon each other.

Lee: The English title is ‘Larger than Life’.

Nam: I gave the title in English first. It’s larger than its real size, larger than life-size. Something which exceeds reality.

Lee: In this work, there are images and stories featuring the sea and waves. The Night of Chilseok: Archive (2020)expresses the revolution of the moon. Each of these elements has a rhythm that feels singular but is also party of a repeated performance. However, these emerge from the natural world and have different rhythms and textures to that of the city, in which daily life develops for so many of us.

Nam: It seems that natural rhythms frequently appear in my works. I think these are movements of enormous scope, which often go unnoticed and which have been repeated over a long time, and I admire this. I mean, it is on the scale of time, which moves endlessly and indifferently, and gives a different perspective. The indifferent and repetitive movement of time contains everything, which can become something like a comfort.

Lee: In Study (2020), two performers dance, their bodies communing with one another. The performance ends with the passage of time when the two of them step together. I thought worldly affairs would be like this. We revolve together when our cycles are harmonised, and then we are going into different orbits according to our own rhythm. You met Choi in 2012, and are moving away from her in 2020. The feeling of meeting and splitting up may be different. What kind of person was she for you?

Nam: It doesn’t feel that clearly defined. I feel like I met her accidentally and have unintentionally gone through a long period of familiarisation. It’s hard to say that I know her, but I understand her better than before. It's hard now to understand what she was to me. She is a significant figure for me, though, and I want to define her as something other than a figure.​ 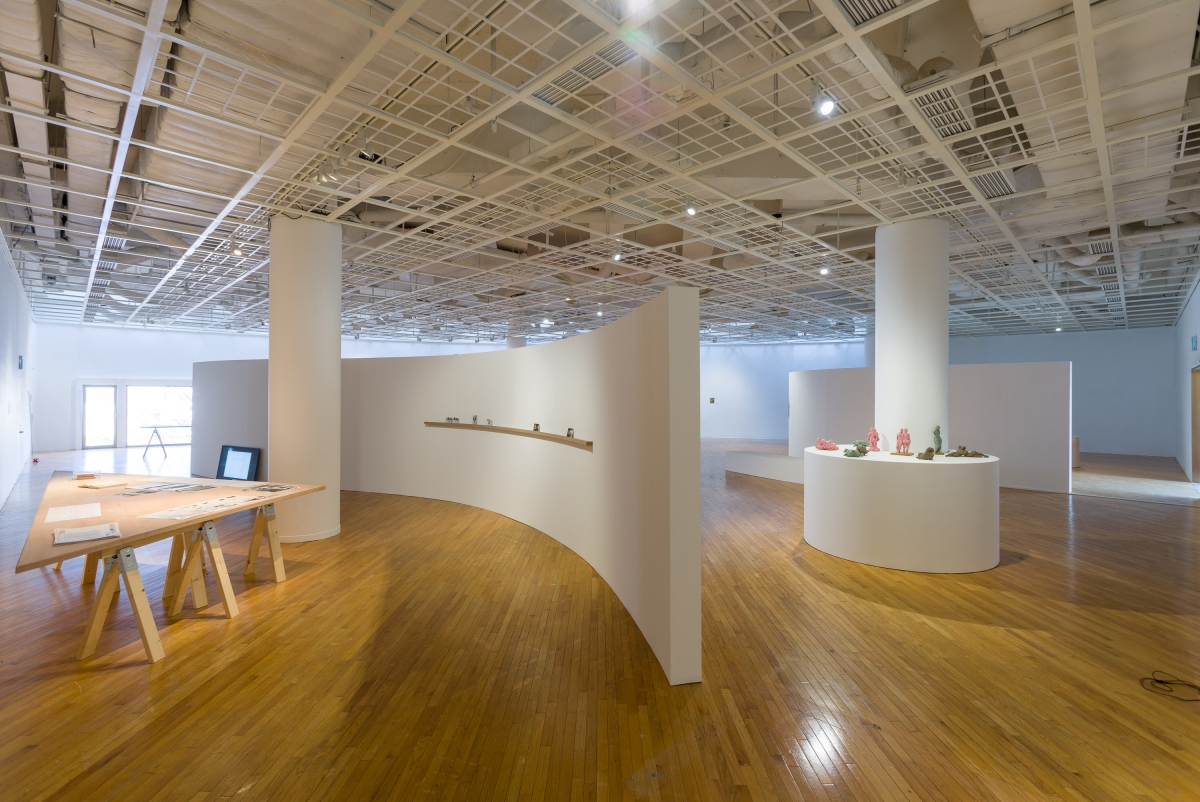 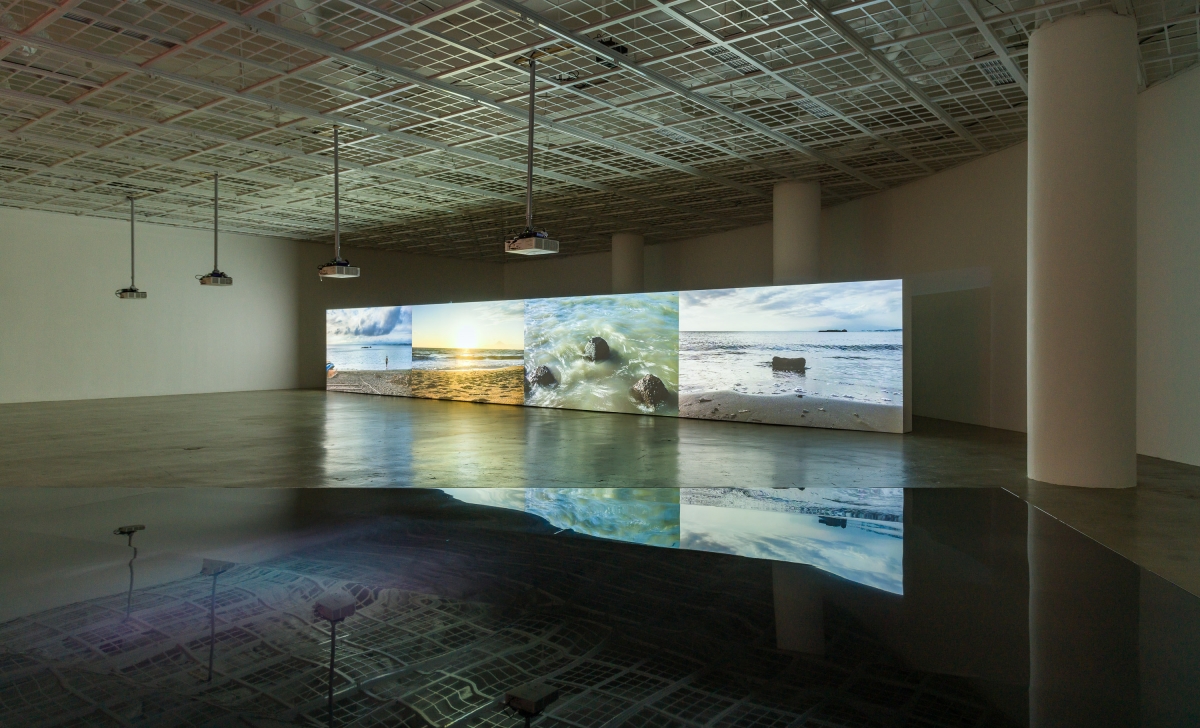