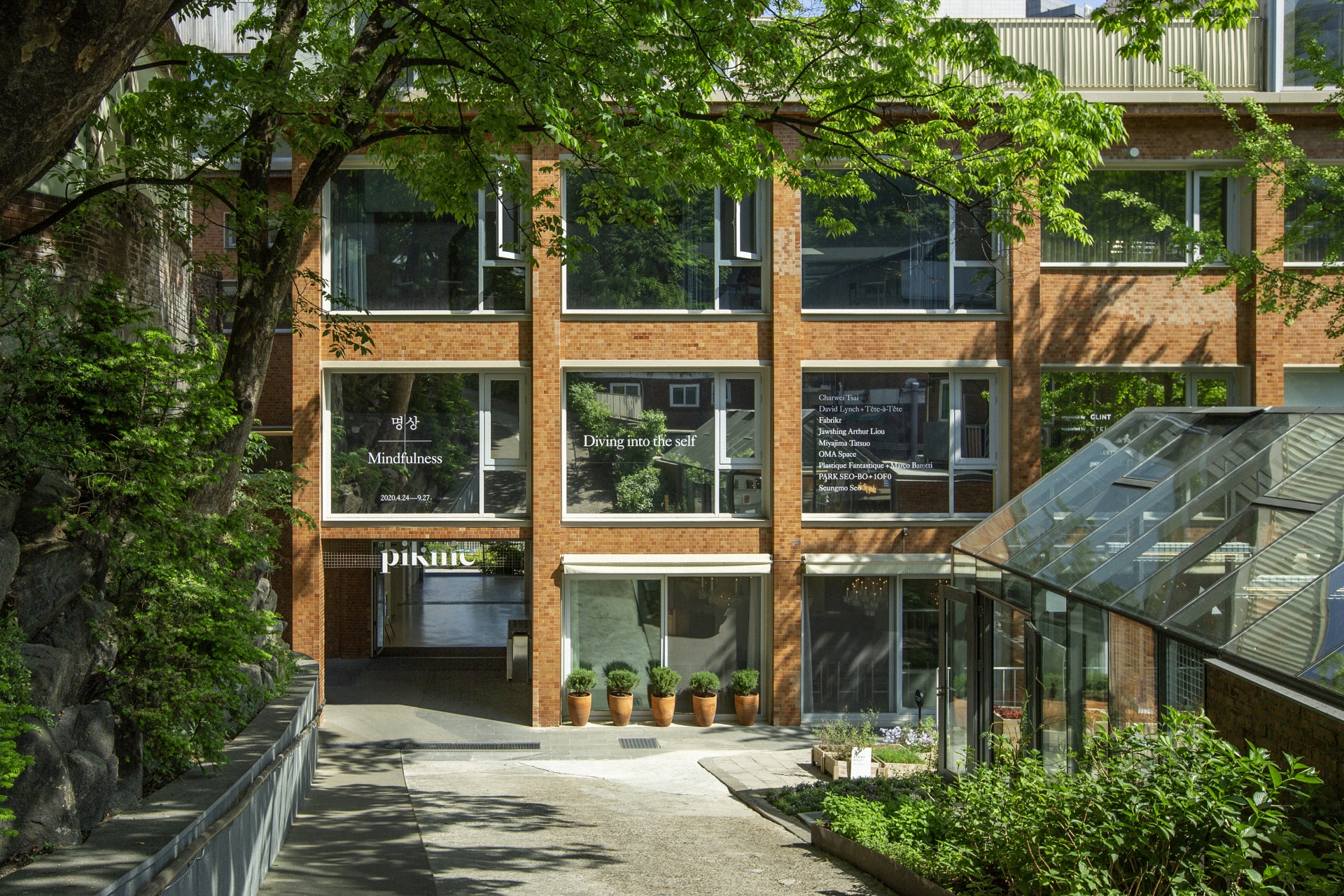 Piknic, which since opening in May 2018 has achieved wide popularity for its refreshing exhibition programme, has returned again with the new title ‘Mindfulness’. Kim Bumsang, the Principal at GLINT who manages Piknic, has continued to devise provocative and sensuous exhibitions. Aligning with its title, this exhibition aims to slow things down and let the audience form a deep engagement with the art works on show. We had the chance to hear the story behind the exhibition from him.

Park Semi (Park): Since the opening of Piknic, following exhibitions such as ‘Ryuichi Sakamoto: LIFE, LIFE’, ‘Jasper Morrison: THINGNESS’, and ‘Peter Pabst: WHITE RED PINK GREEN’, all expressing the singular universe of each artist in a different way, this exhibition aims to collect various artists and works under the theme of ‘mindfulness’. Compared to your previous exhibitions, there is a greater sense of deliberateness in the exhibition design. What was the reason for coming up with this exhibition?
Kim Bumsang (Kim): I always wanted to hold an exhibition that would emphasise ‘how to show what to show’ rather than lining up artists and works, and I think I have succeeded. In the case of Ryuichi Sakamoto or Jasper Morrison, not a classic artists, I would consult with the artist directly to create various compositions that would shine light on their work and thoughts. The aspects that we discussed in ‘LIFE, LIFE’, the collaboration with Alva Noto or movie music, were proposed by us, and in ‘THINGNESS’ we benchmarked the London shop and reconstructed it on a larger scale. In the same way, the rooftop lounge, sponsored by Bitra, was created as a space for visitors to experience Jasper Morrison and to prioritise emotional responses rather than individual works, from the beginning to the end.
Meditation Mindfulness is an extension of that. Meditation is one of the topics of key interest since the early 1930s, and in recent years I noticed its influence grow among people. Then, noting people's explosive interest in the Wellness Fair, which was held as a South by Southwest (SXSW) auxiliary event, there was a swell of interest prior to this exhibition. I thought it would be possible because I was interested in ambient music or works that expressed an east-asian world view in a lyrical way. And compared to earlier exhibitions that shed light on certain figures, I thought the theme could be conveyed more freely through the choice and arrangement of planners.
Park: The moment you suggested that the exhibition focuses ‘primarily on the exhibition design or its designer’ was particularly interesting. What differentiates your way of drawing together artists and their work from other more conventional approaches?
Kim: It is also an aspect that always concerns me (laugh). Frankly speaking, there is no clear process. First, do enough research. Regardless of genre or artist, artists, musicians, chefs... And when a faint outline comes up, it creates a specific overall configuration from then on; inductive rather than deductive, made later. This is a different approach to most art galleries who make and communicate their plans based on themes and artist lists first. Except for what is possible and impossible, some of the things that are noted first are the works, and we also work on the combination of them as if we were making a work. From the perspective of the artist, he or she is often unhappy or surprised to see the final exhibition. It is tremendously inefficient, but draws on the expertise of great staff.
Park: Aside from the works that has previously been on show, such as ‘Bardo’ (Charwei Tsai) and ‘Five Opposing Circles’ (Tatsuo Miyajima), there are also new works such as ‘1 of 0’ (Park Seobo + 1 of 0) and ‘Slow Walk’ (OMA Space) in this exhibition. I presume the discussions between the exhibition designer and the artists regarding the ways in which these artworks should be placed in terms of direction and manner must have been quite important?
Kim: For the works that have been shown before, many are often reconfigured to fit the new exhibition aims during the design process. For example, ‘Slow Walking’ was a large-scale interactive work that uses Google's Jacquard technology and artists. For the purpose of ‘Mindfulness’, however, during the discussion phase with the artist, the artwork was reconfigured to appear in a simpler way to highlight its texture. ‘1 of 0’ is a collaborative artwork created by Park Seobo and 1 of 0. During the initial design phase, I was thinking of Mark Rothko and Philip Johnson’s ‘Rothko Chapel’, but then contemplating how to show Park Seo-bo's work anew, it seems that more interesting results have emerged.​ 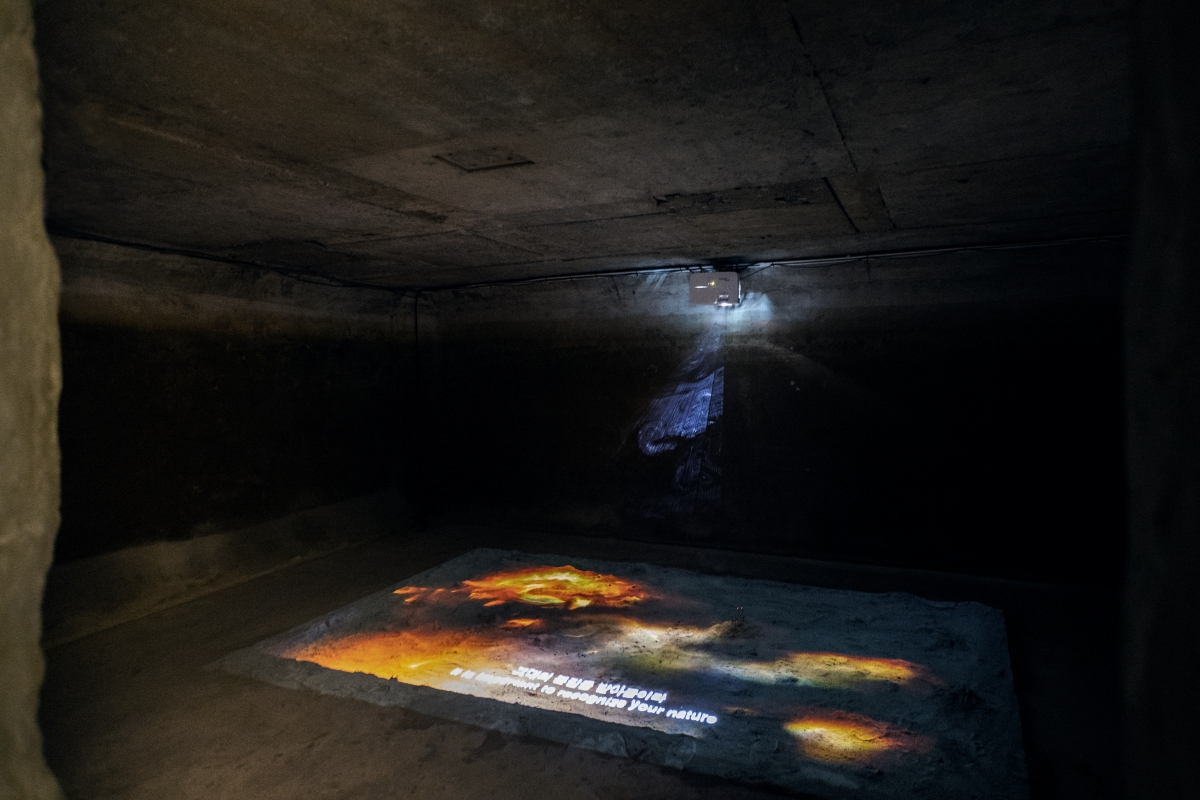 Park: This might be a big question, but I’d like to hear your thoughts on the power of mindfulness, the power of art, and the connecting point between mindfulness and art.
Kim: Creative and expressive activities are impossible in the face of fear or anger. That's because all the attention, and capacity for concentration, is lost. Most of them are illusions made up of past regrets, future worries, and sorrow for others. Meditation helps me get out of here and look at myself now. I also saw this as the starting point for creativity. I thought inspiration and intuition could be better embodied in this transparent consciousness. Artists and creators are people who can clearly perceive and make use of that potential creativity within them. I hoped that the audience would also be able to step closer towards a world of pure perception sought by mindfulness through these works.
Park: Recently, there have been many exhibitions that invite the audience to participate and directly experience the artworks. I think this is being done at an unprecedented level in the case of ‘Mindfulness’ (laugh). For example, not only is the audience greeted with an aroma as soon as one steps into the exhibition hall, one is then asked to take off one’s shoes as they meet ‘Slow Walk’, has one’s body pressed down by balloons in ‘Breathing Volume’ (Plastique Fantastique + Marco Barotti), and is asked to experience absolute darkness in ‘Space’ (Fabrikr). None of these artworks leave the audience untouched and make them experience the exhibition through all of the senses, sight, smell, and touch, in a controlled way. Even photographs are prohibited (laugh).
Kim: When I developed an exhibition on Pina Bausch’s stage art, I used to say, ‘I wanted to liberate the limited time art properties of performing arts in the form of exhibitions’. Space and time interact, but I think new art, new sensory experiences, are born in their attempt to overcome limitations. It is similar to the way Kandinsky tried to draw jazz. It is not a simple combination concept between visual media and theatre, but a birth of something new when one experiences in a deeper way the essence of each field.
Because the artworks were by themselves high quality, and since it was important to experience them in an order due to their context, I decided to make the movement through the linear. Spaces like department stores and shopping malls result from researching a colossal amount of data on human traffic and behaviour. While it may not be as detailed as that, I tried to be conscious of time and space as much as possible when designing this exhibition.
I’ve been also thinking a lot about the properties of photographs in the exhibition hall. It was a strange thing to take photos in an exhibition hall at least until the 2000s. Then all of a sudden, I think it is now fair to say that exhibitions tend to invite people to take photos. To be honest, in the exhibition ‘Peter Pabst’, there was no so-called ‘instagrammable’ moment. Against my intentions, I was critiqued for degrading Pina Bausch, or that I had merely created a large photo studio. I don’t think that the success and failure of an exhibition depends on whether it is ‘instagrammable’ or not, rather, I think it is the opposite that makes an exhibition stand out. Regardless, since the theme of the exhibition is mindfulness, I wanted the audience to focus solely on the experience and so banned all photographs.​ 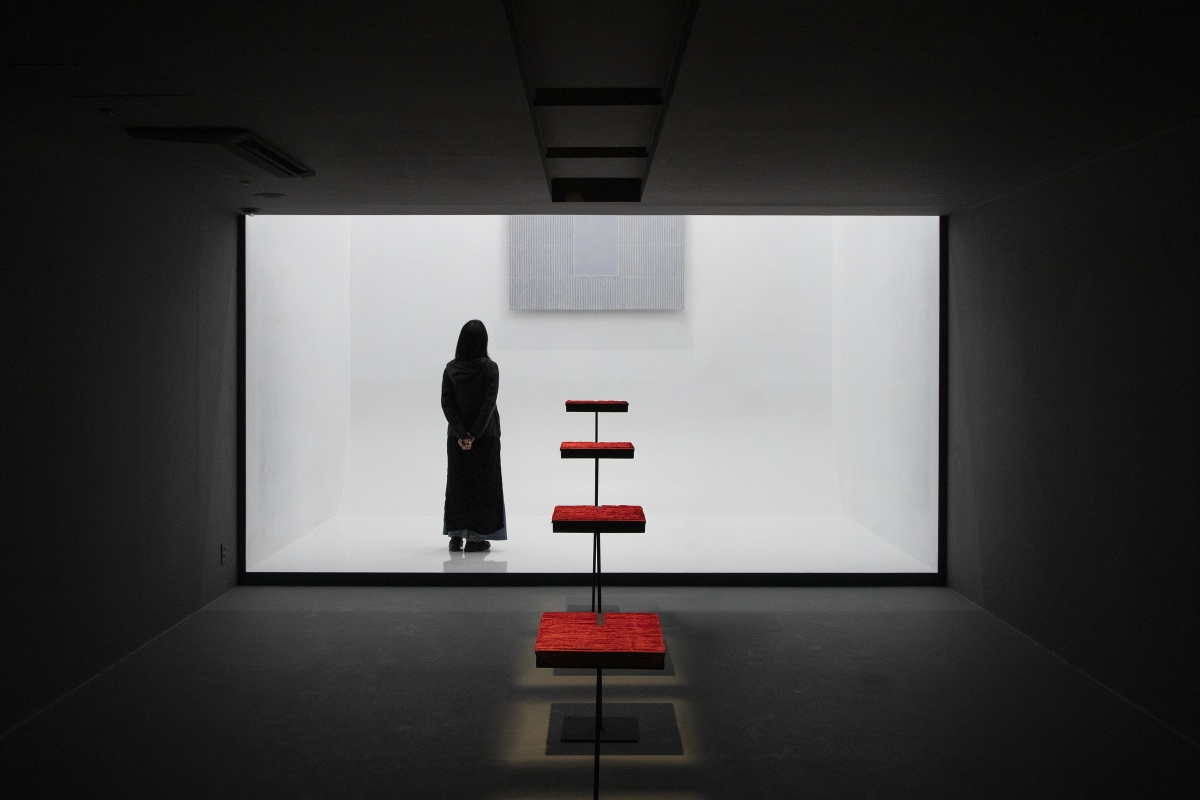 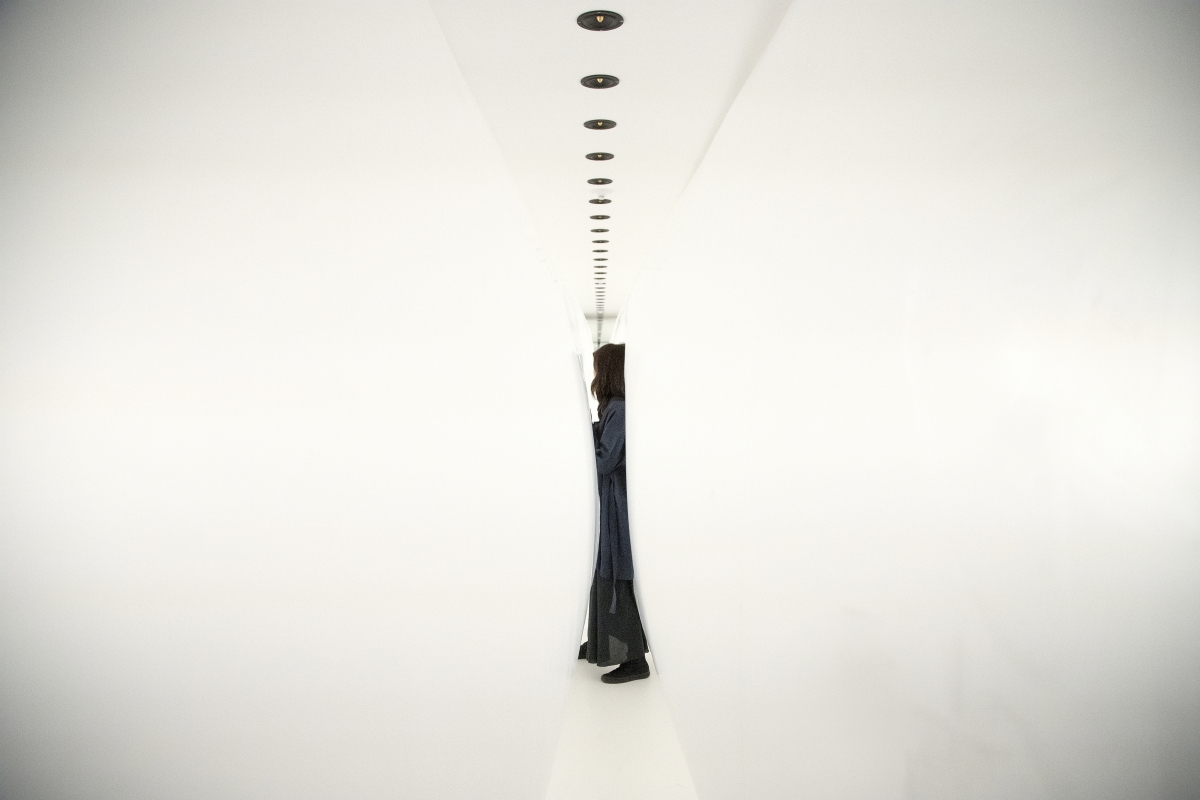 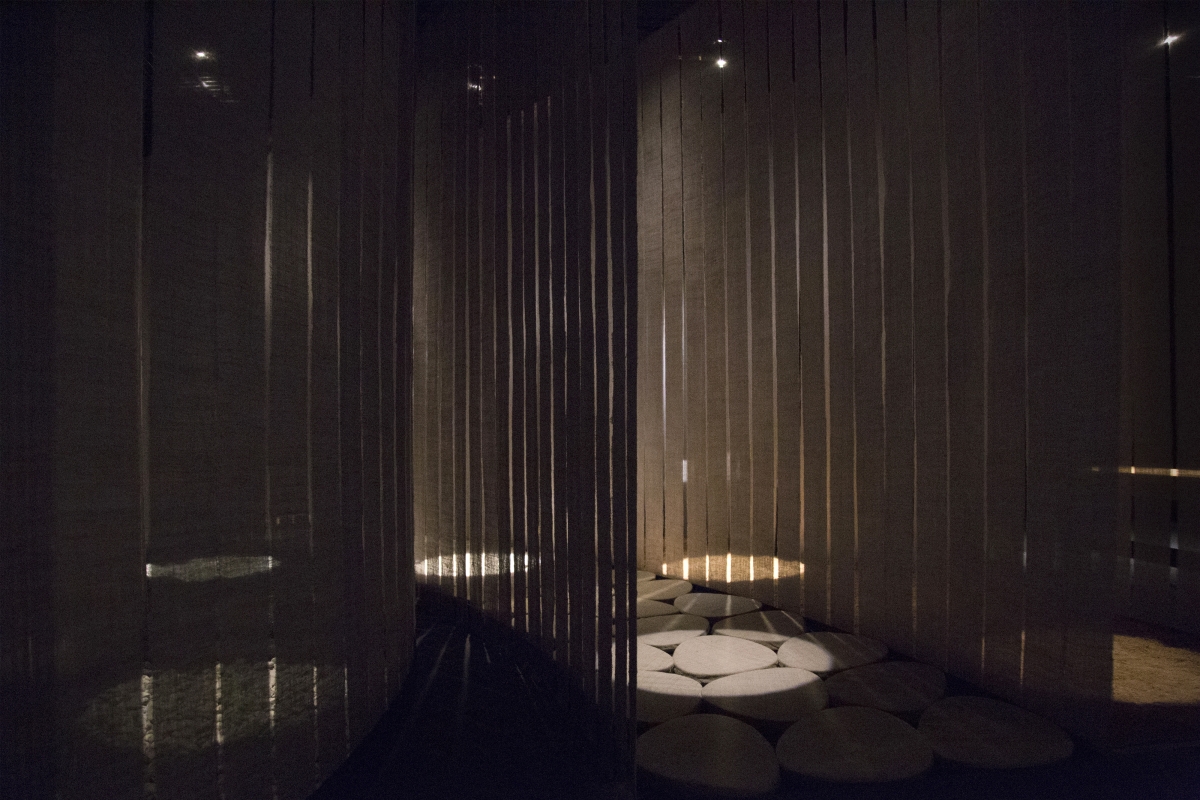 Park: The works based on space are especially eye-catching. Not only are there works like ‘1 of 0’, ‘Breathing Volume’, and ‘Space’, but there is also the tea house and water space designed by Samuso Hyojadong on the rooftop. This space allows the audience to reflect on the exhibition and slowly return to reality. A more provocative and proactive exhibition design seems to invite the audience to experience an exhibition of another dimension entirely.
Kim: I hope to curate a wide range of exhibitions, following different, bold models. Experience through space is one of these approaches. When we enter a well-designed building, we say things like ‘I can hear the wind clearly here’, or ‘I can observe the various hues in the sky from here’. That space is itself an artwork that can present a more profound moment of inspiration than a generic art installation. Because ‘Mindfulness’ was mostly designed in a dark space to help the audience to focus, I wanted to provide a good landscape and a quiet pause for the audience members who managed to reach the rooftop. I requested such a space from the architect Seo Seungmo.
Park: In terms of its themes and form, ‘Mindfulness’ is an exhibition that is presented in the wake of the Covid-19 outbreak. Considering how disease (infection) is something that will continue to exist in our contemporary age, I wonder if you have any thoughts on how curation and exhibition design after Covid-19 might respond to potential future outbreaks.
Kim: I couldn't think too deeply about it. But before discussing non-face-to-face art and its possibilities, I think we should think about how we can maintain some elements of this essential physical interaction because we think meeting people in beneficial spaces, taking a walk in nature, experiencing works of art and talking about them with others are among the happiest and most beautiful times that mankind has ever created. I think it's good to be able to see content easily on YouTube, but it's a whole different thing to be able to feel the air move through a landscape or see a live performance and participate in creating that atmosphere. 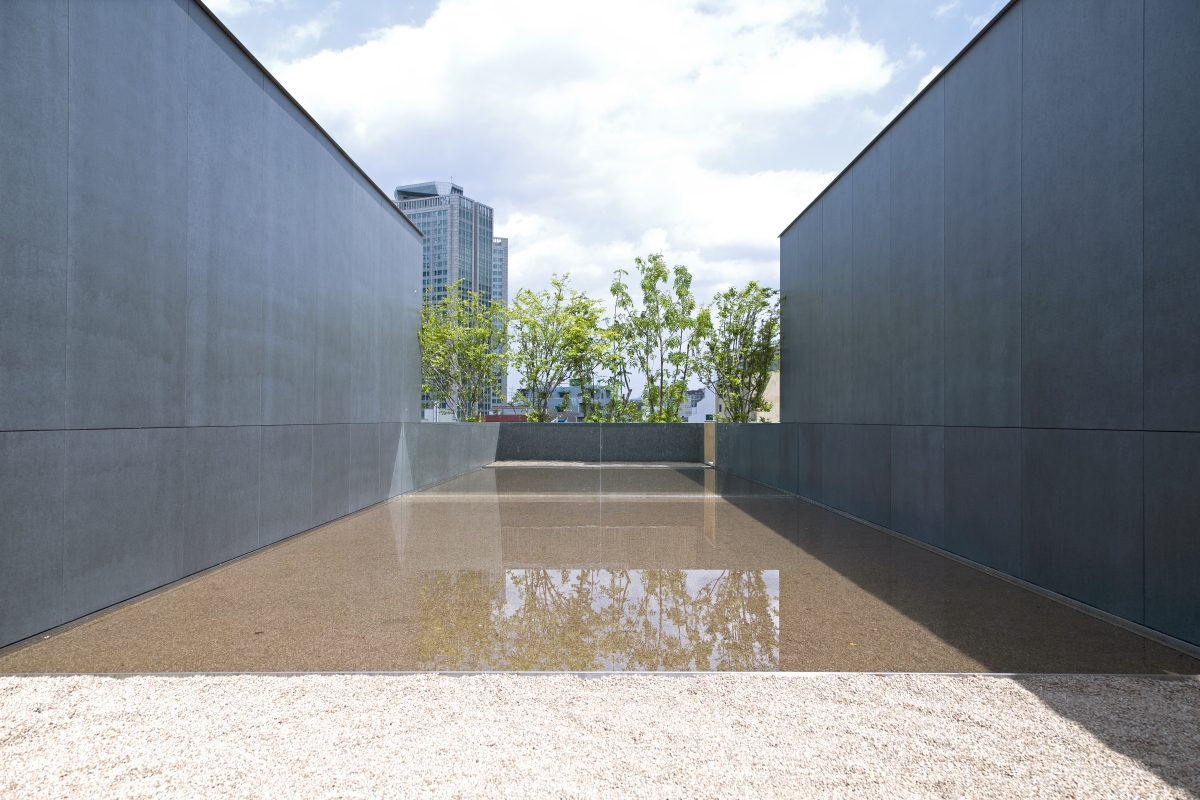