Designing urban housing begins with the task of inquiring after the kind of spatial experiences to which the resident will be exposed, and querying how the existing living conditions may be differentiated from the status quo and reinterpreted in such a space. In the case of Light Hollow, this inquiry began with the consideration of whether a sustainable livability might be maintained by bringing to light personal values in the old city centre. It is particularly problematic here, where tangible slumification is taking place, unlike in other residential spaces where the functional cycle of developments intended for single family homes repeats. Here, ‘personal values’ means the intimate experiential values derived from the responses of the resident according to variations in light, sound and nature over time. Areas replete with such personal values must be realised as areas of flux, in which residents can actively modulate their living space with the passing of time and dismantle walls as physical boundaries.

The floor plan of Light Hollow has been planned according to a square division of 9 parts resembling the Chinese character 井. Where the previous project 9×9 Experimental House (2013) featured a spatial composition derived from a floor plan in which 9 heterogenous realms were directed towards a central space, this residential project first divided the floor plan into ‘floating floors’, deferring to a section plan with an organisation of varied hierarchies. This spatial composition necessitated a steel structure, with the structural materials for these sections all minimised to 180×180mm.

The divided floors each then became wall-less rooms or large platforms serving as staircases. As the functionally defined realms and the undefined variable areas overlap, the floor seems to flow and connect as if floating. Such areas coalesce into one, creating several voids throughout the section and the floorplan. Residents will find their gaze travels and traversse multi-dimensionally across these voids, as the design intends to continuously incite conversations with the gaze. The resident’s eye latches on to the experience of the external landscape, represented as a mosaic through the elevation’s minimal outlets, and, at a certain moment, a scenic landscape of the old city centre will emerge in full.

Several limitations presented themselves on the approximately 152m2 large sloping site. To the north there was the issue of privacy, as a multiple housing residence faced the site with only a 6m frontal road between them. Similarly, all three other sides of the site were surrounded by buildings, posing another external variable for the design with the challenge of assuring privacy. A freestanding wall was installed with louvers, with a minimal outlet on the façade as a response to this complex surrounding context. The slightly conservative façade obscures the multi-dimensional organisation within, while the space intended to open up and expand upon the internal space.

This expansion is reinforced by the elevated windows that open fittingly to the south and the west, and the 井 configuration of the skylight, and this device permits the house to retain a sky marked by the passing of the four seasons. The streams of light which infiltrate the project through these numerous windows composes a ‘light hollow’ settling in a recess composed of cross sections of varying depths. One can turn an ear to the tranquility unique to this place by following the trajectories of light falling into the base of this hollow.

Light Hollow is an extension of the aforementioned 9×9 Experimental House. The prior project was based on the concept of exploring the fundamental experience of living through a space in which the user could actively define areas and dismantle internal and external spatial boundaries, as opposed to areas of action defined by furniture. Meanwhile, this project maintains commonly defined areas in the residential projects and overlaps them with variable areas that can be defined by the user as one lives within the space, threading them together as a single sequence. It was possible to take note of the unique qualities of the changing external environment through this sequence, and to seek out a novel approach to life through the experience of actively modulating one’s personal space through the active gaze of residents.

The realisation of such a concept was only possible through the understanding and empathy of the client, as is the case in all architectural projects of such a high level of completion. The client accepted the suggestion of nominating a Project Manager system to comprehensively manage the entire process from design to construction by the architect. As a result, over the course of a year in which construction and field design simultaneously took place, this allowed for a three year time-frame for completion overall, and as the project developed it became a chance for the client and architect to observe and record the potential for the space to flexibly develop into an urban residence in the old city centre while staying true to its unique environment.

Light Hollow is, in this sense, another experimental project, in which the physical construction of the project does not signify the completion of the project, but rather another point of departure for continued completion, with the possibility for residents to make active interventions in the project as life takes place within. 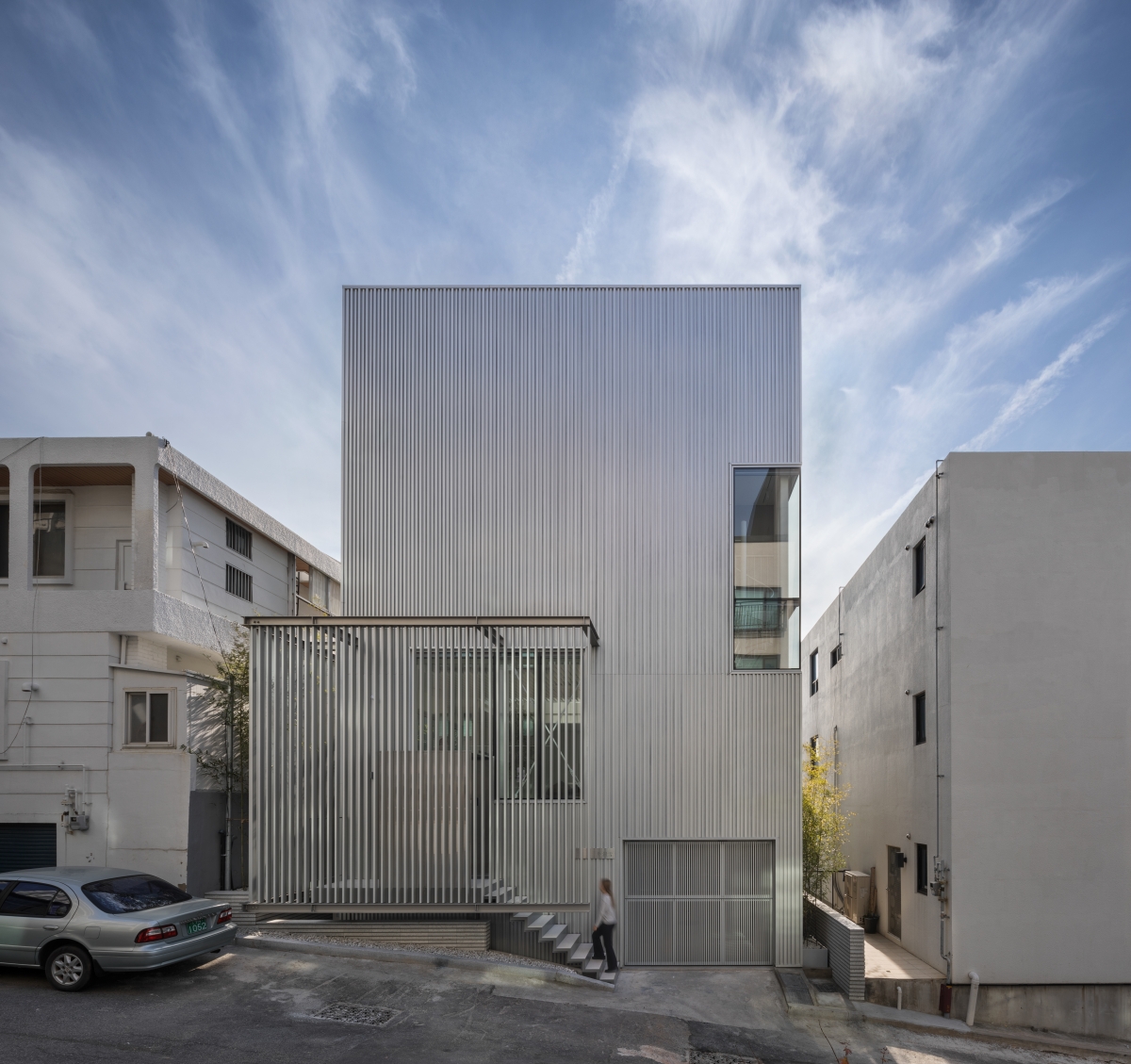 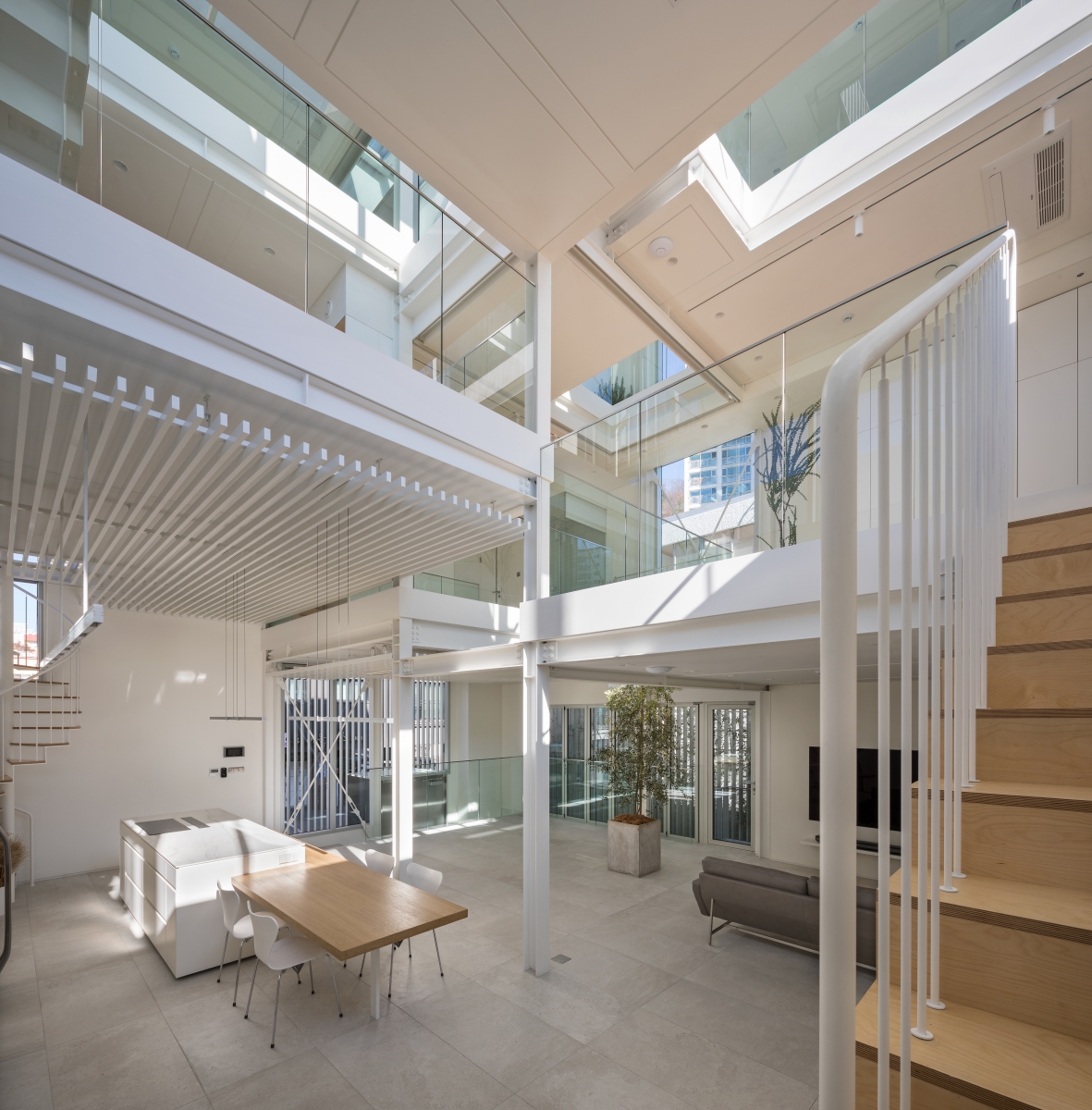 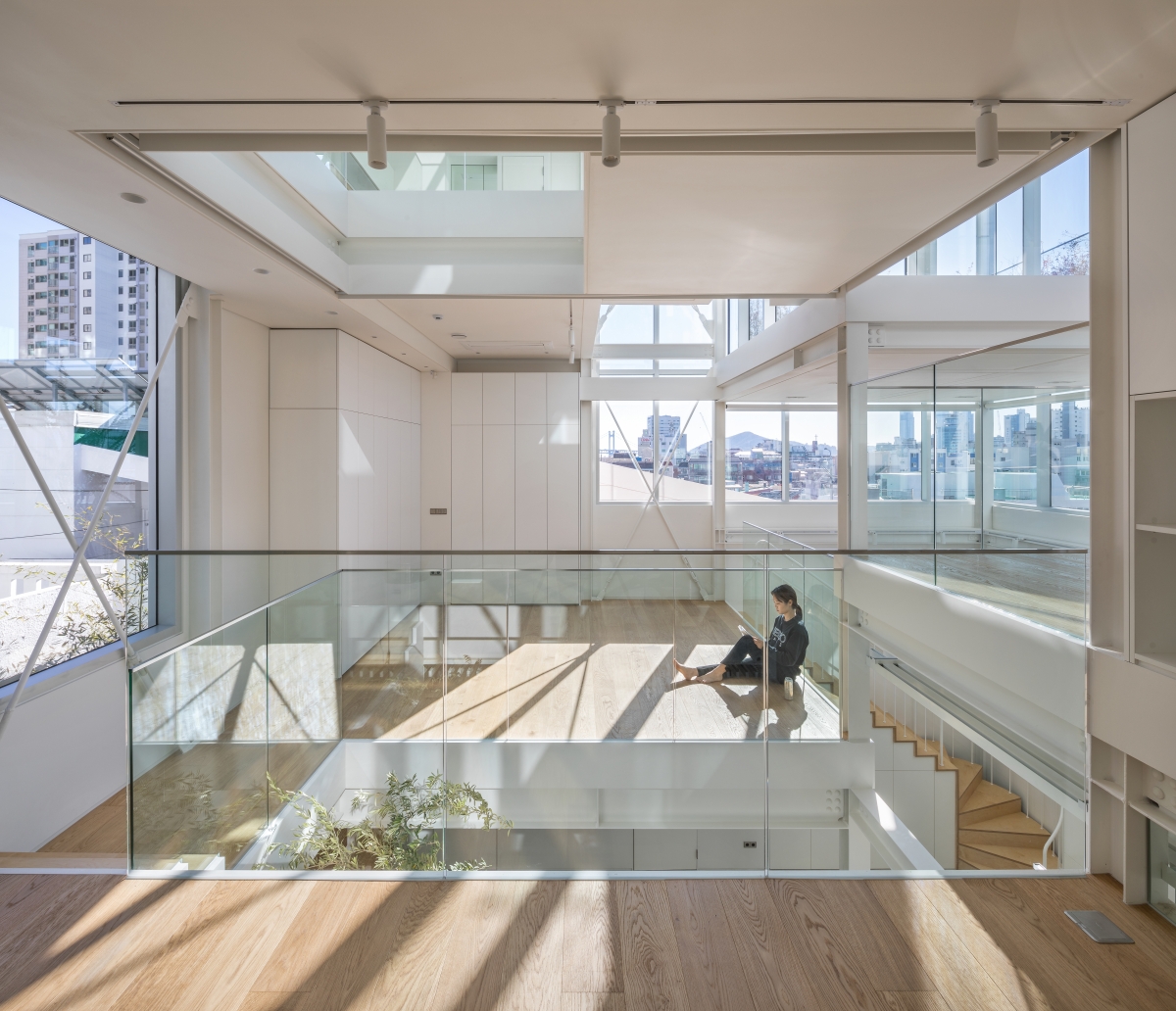 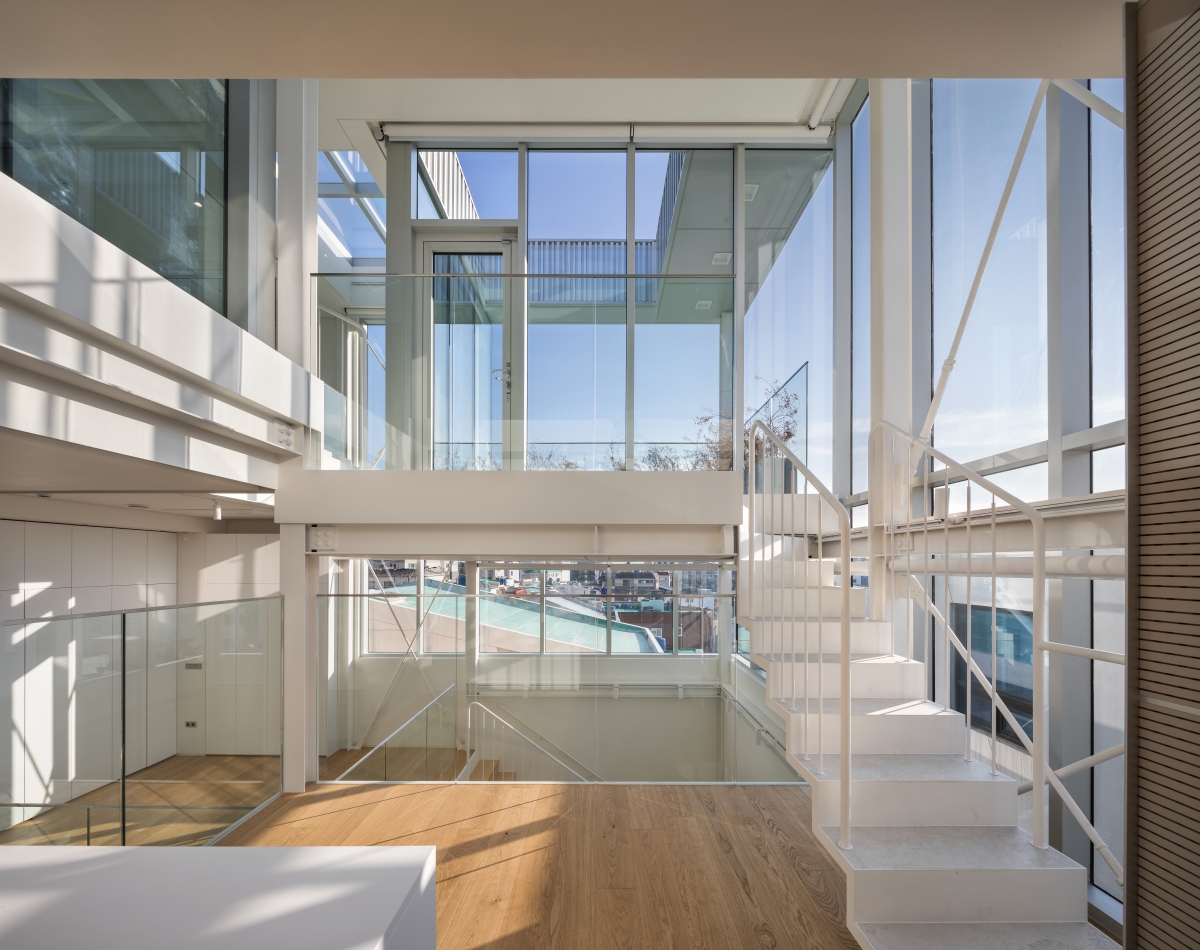 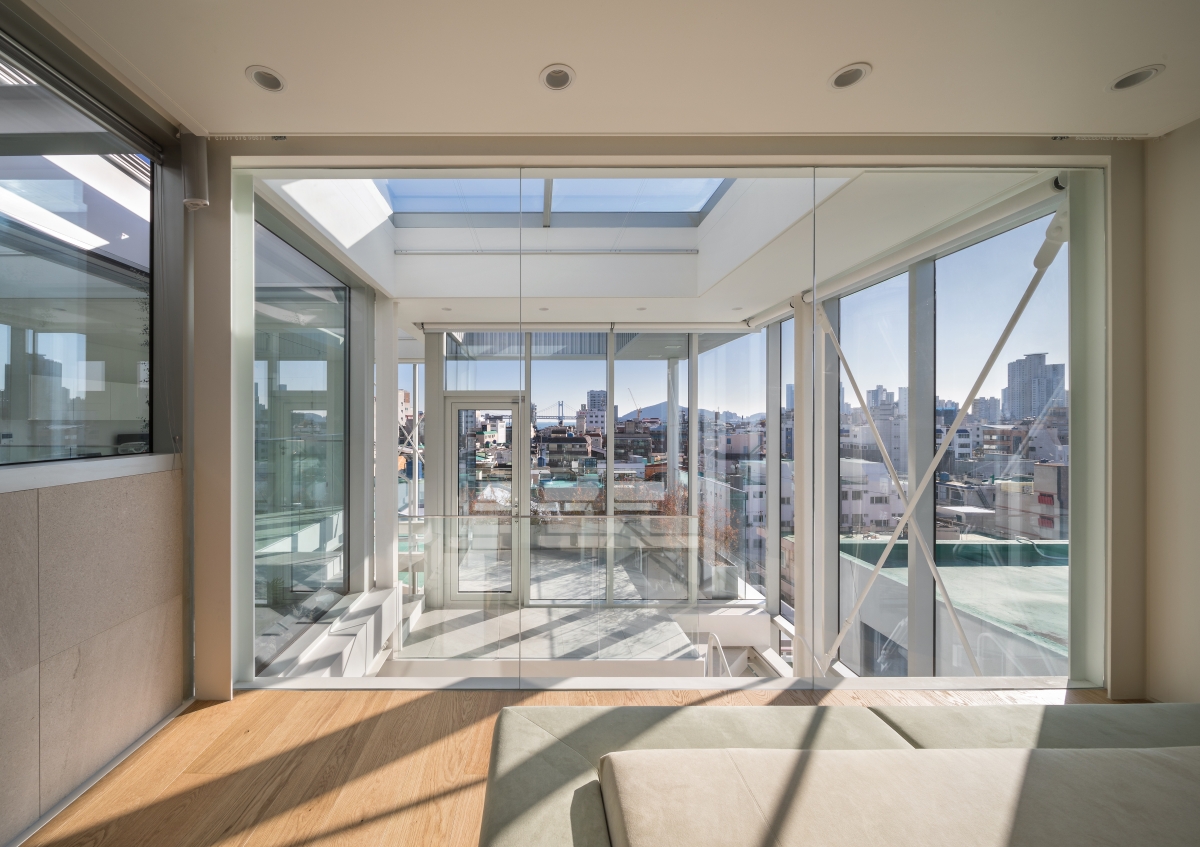 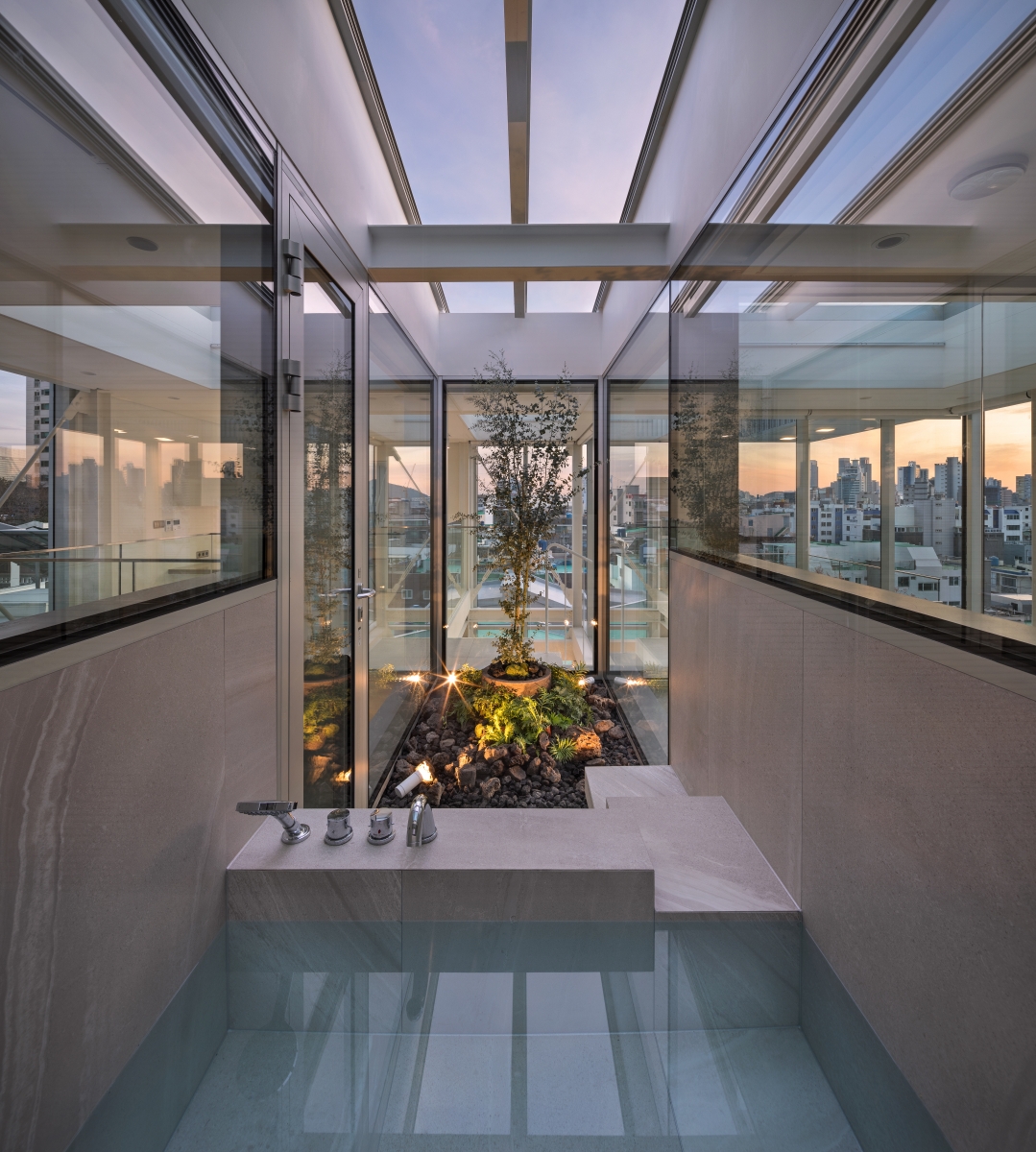 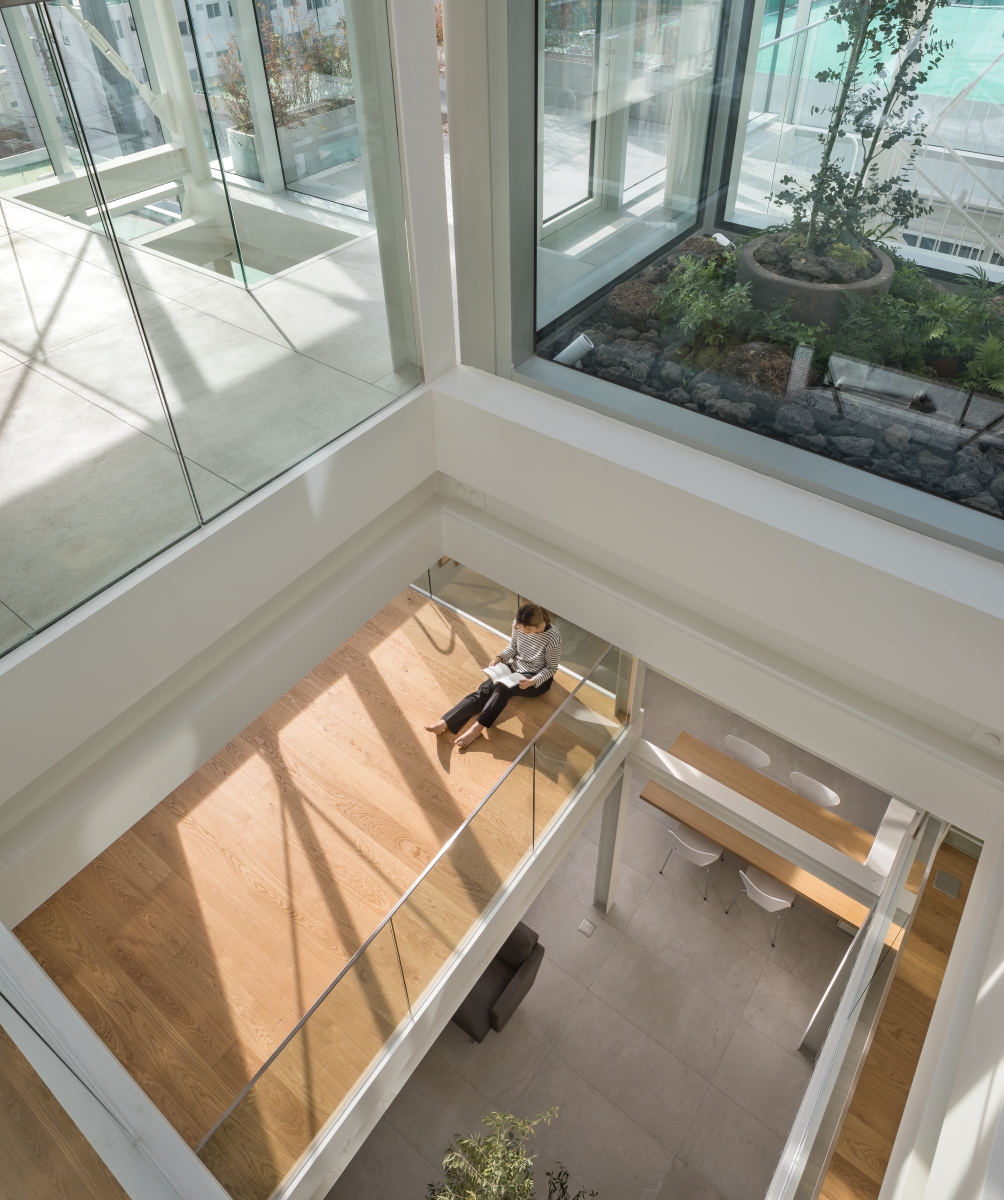 Younghan Chung
Younghan Chung graduated from the department of architecture at Hanyang University Graduate School. He has experimented with a diverse range of architectural projects since opening his architecture firm in 2002. From 2013 onwards, he has been in charge of the the direction of the long-term themed exhibition ‘Minimal House’, and in 2016 he was selected as an invited artist for the Korean modern architecture international exhibition, ‘Fragments of New Housing Language’, organised by the Ministry of Culture, Education and Sports and hosted at the National University of Singapore. His representative project, Poroscape (2012) in Insa-dong was awarded the 2013 Seoul Architectural Work Award and 6×6 House (2014) was awarded the Kim Swoo Geun Preview Award in 2014. More recently, Five Trees (2015) was simultaneously awarded the KIA Award (The Best 7 Architecture of the Year Exhibition) in 2015 and the Busandaun Architecture Awards, 2016. In 2018, Floating Cubes (2018) was awarded a prize in the Architectural Design – Residential Architecture category, hosted by Architecture MasterPrize.
No.628 March 2020 architecture urban housing living condition personal value Busan 9×9 Experimental House steel structure light hollow Younghan Chung Architects
LIST
bookmark_border
favorite_border
57