A Solo Forest Dwelling
A farmhouse, on a site of an area of 670㎡, sits atop a steep slope at a height of 60m from the access road. The client wanted a house in which to live with his parents so he could move to this remote, tranquil town. He approached us to fulfill the design of a new house in which he might live alone as neighbour to the existing farmhouse, within the confines of the lot owned by his parents.
This house had to feature a kitchen and storage space on the first floor, and a room that connected to the existing farming house on second floor. In other words, he wanted to use the first floor as an open, shared space, and the second floor as a private space.
Before the client met us, he drew up a floor plan to sketch out the arrangement and size, also studying and compiling data to do with various eco-friendly materials and facilities. By examining these findings, he conceived of his desired construction technique ,in partnership with us. Most significantly, we contributed to the detailed drawings, developing six alternatives, sharing a model and 3D modeling data with the client – even though it is a small house.
In light of the planned spatial arrangement, we set upon devising a new building for the client inside the right side of the existing building. The building could be connected to his parents’ home via the kitchen and multi-use room. However, this was close to the perimeter of the lot and because of the outside path the area available to the first floor was only 20㎡​, and so we designed 1m of the second floor as a cantilever structure to expand the space and manufactured furniture that adapted to the curved shaping of the walls to improve its practicality. At this same stage, we also opened up the possibility of a panoramic view within the space.​ 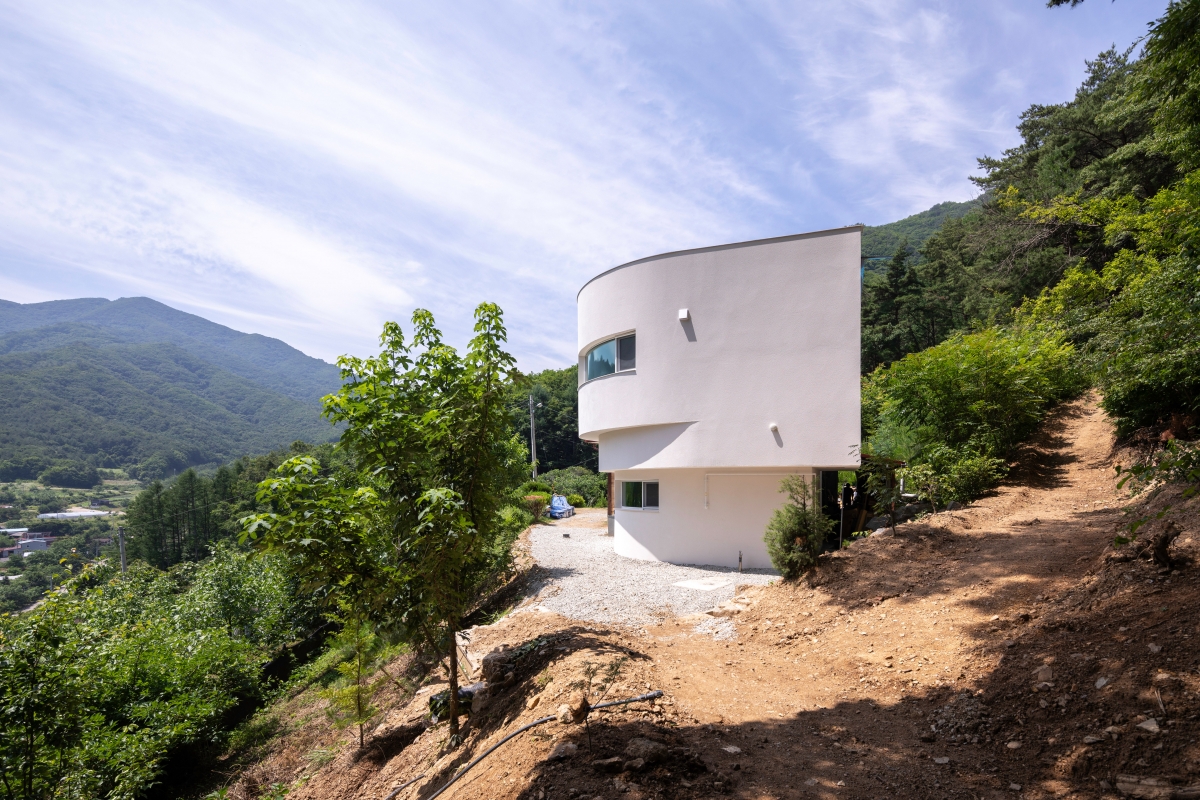 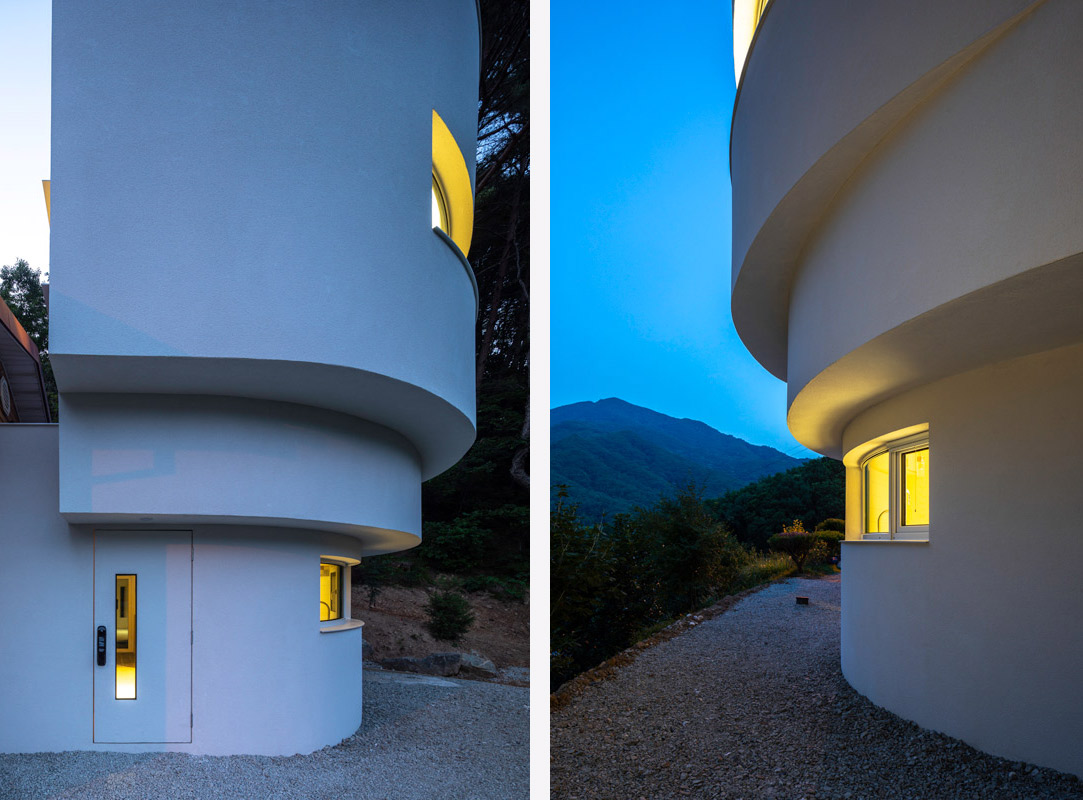 Because this house is located in the middle of the mountain, a simple construction technique was required and we had difficulty selecting the right construction company. Although the construction scale was small, we wanted a competent construction company in the capital rather than a local construction company. Finally, we met a manager of a construction company through the introduction of an acquaintance; we are still really grateful to him even after long the construction work has been completed. Selecting the wrong construction company can result in poor outcomes, even if a design is nicely worked out. Construction lasted eleven weeks. We stayed in lodgings close to the construction site, because of the mountainous location, and brought in the best technicians for each construction phase or process. As a result, the completed details were of a very high quality.
For the foundations of the building, we finished the floor using reinforced concrete and applied a light weight wood framing system to the walls and the roof. After that, the roof was finished with zinc and the outer walls were finished with monocouche to neaten up the curved surface of the outer walls. When planning the internal spaces, we decided to create different atmospheres, because the first floor and the second floor have different characteristics. In the shared kitchen we laid porcelain tiles on the first floor, making them easy for the client to clean, while the walls were finished with birch.
The kitchen furniture along the curved wall is made of birch so people can gaze at the outside view in front of the sink. When you go up the stairs lined with the birch walls, after taking off your shoes, you reach the spaces on the second floor. This space was finished with diatomite, which is an eco-friendly material. We installed windows in primary positions in all directions so that the occupants can look down the yard or out over the distant mountains. 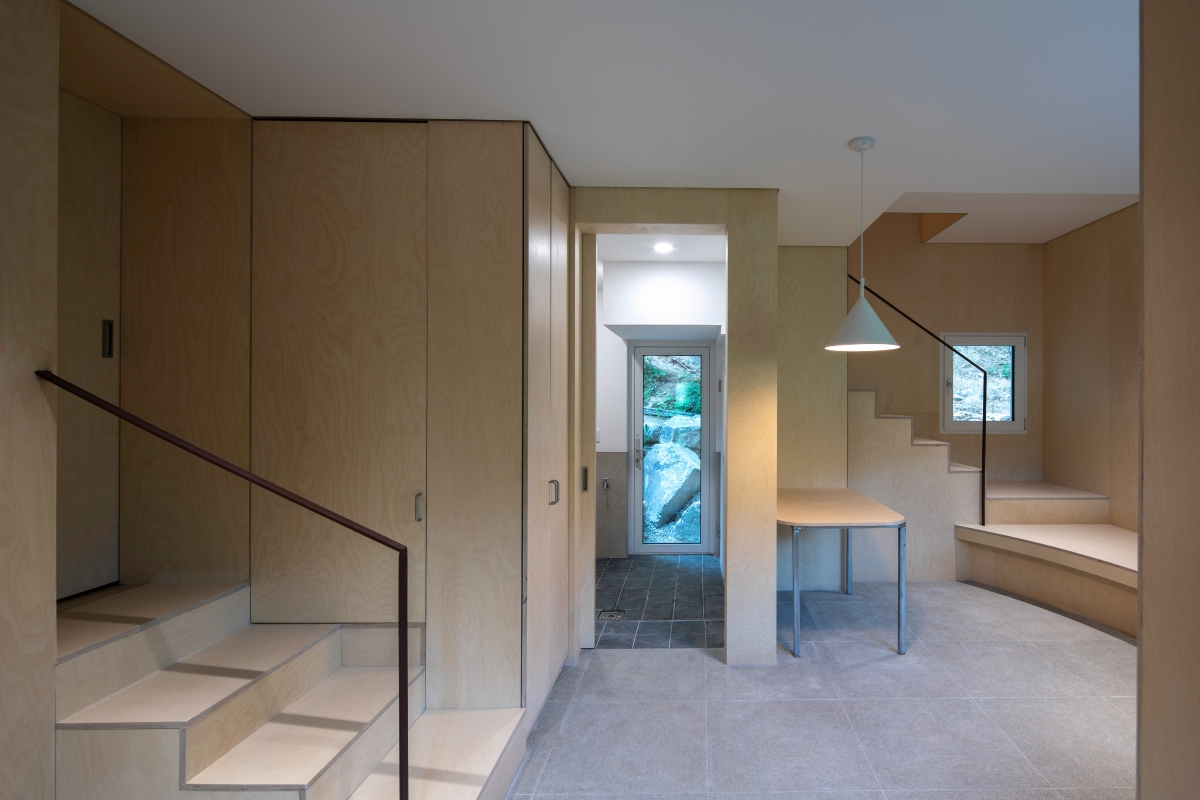 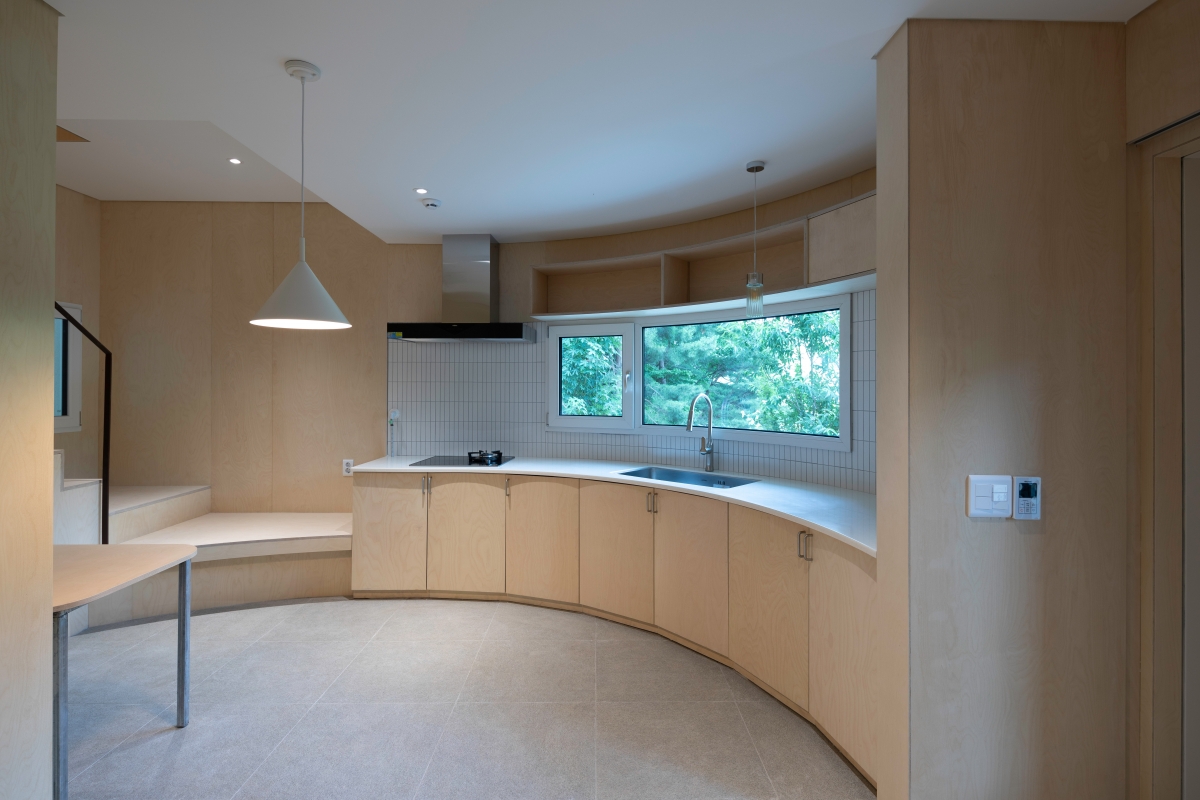 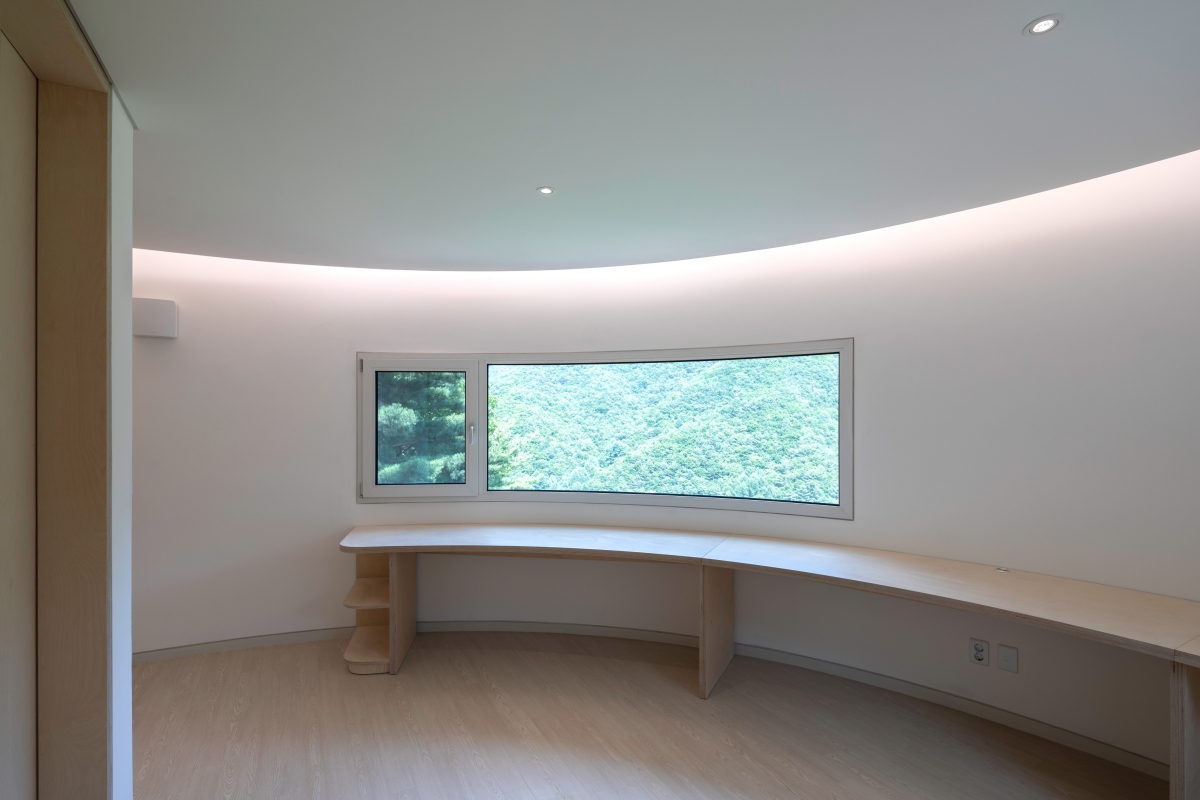 The clearing here in the middle of the mountain is surrounded by the mountain range, and in addition to the spectacular fall foliage, the winter snowy scenes are incredibly beautiful. You can see the surrounding landscape from inside the house and enjoy moments of meditation in nature. The outer walls that coil softly towards the surroundings seem to expand and draw themselves into the forest. On the contrary, the external view, seen through the curved glass inside the house, makes you gaze out into many faces of the forest. 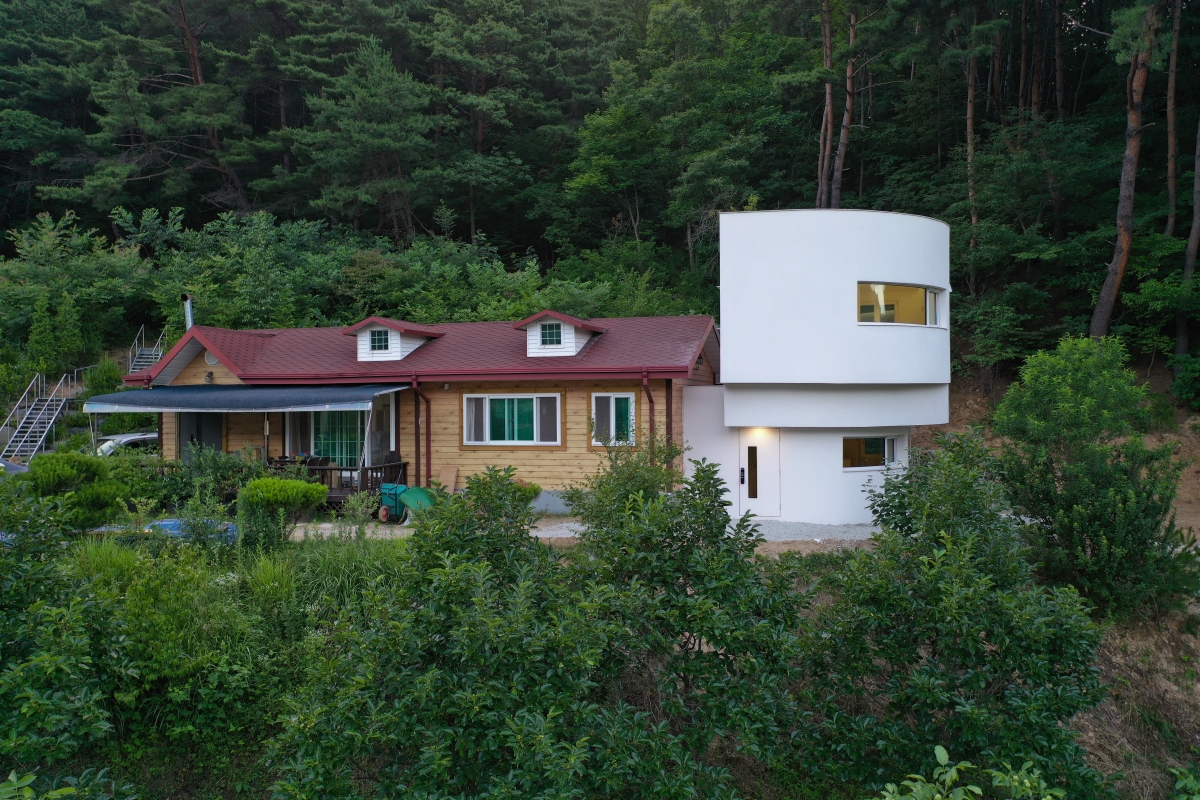 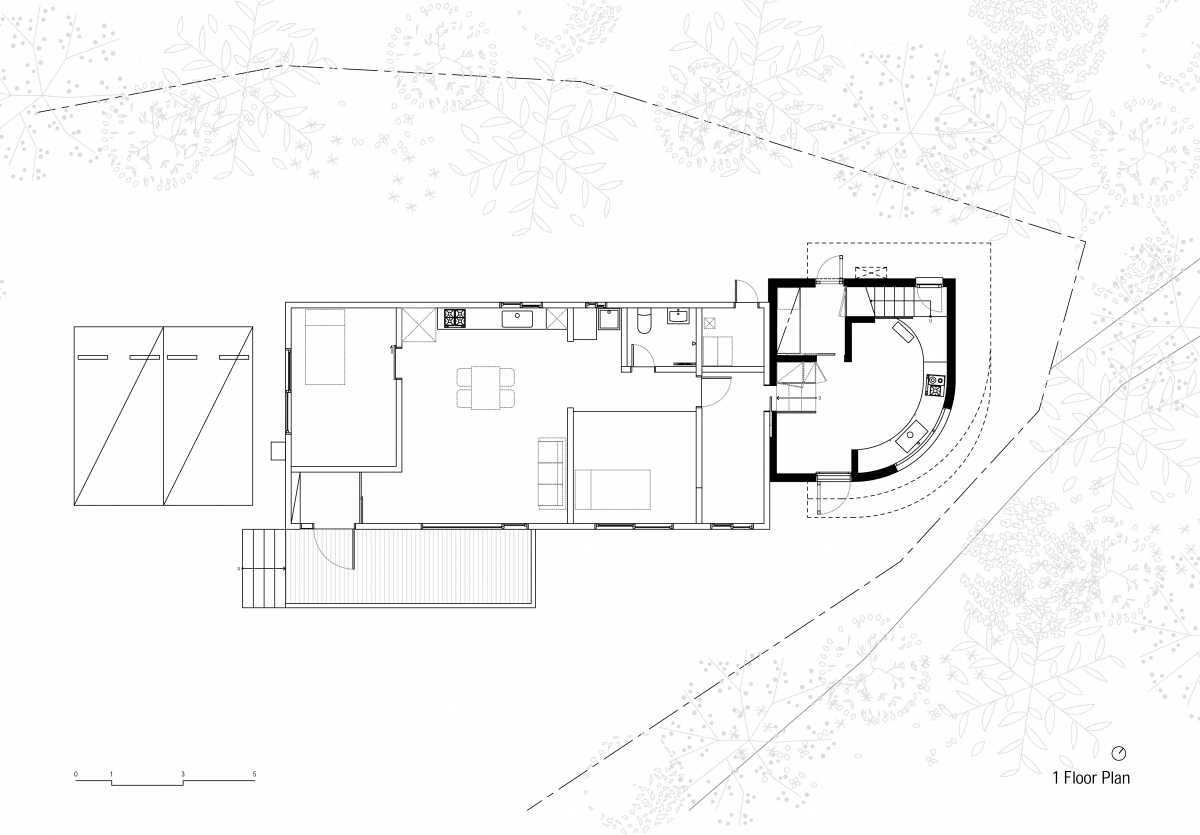 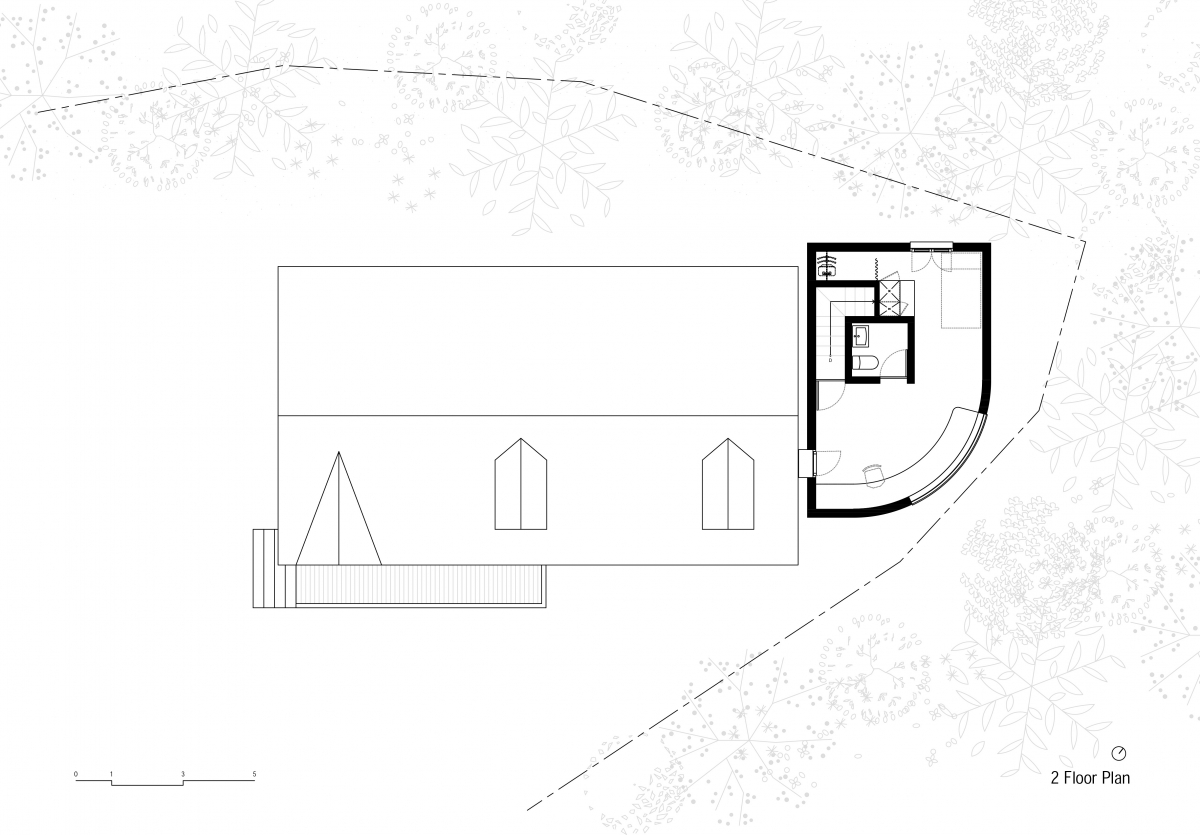 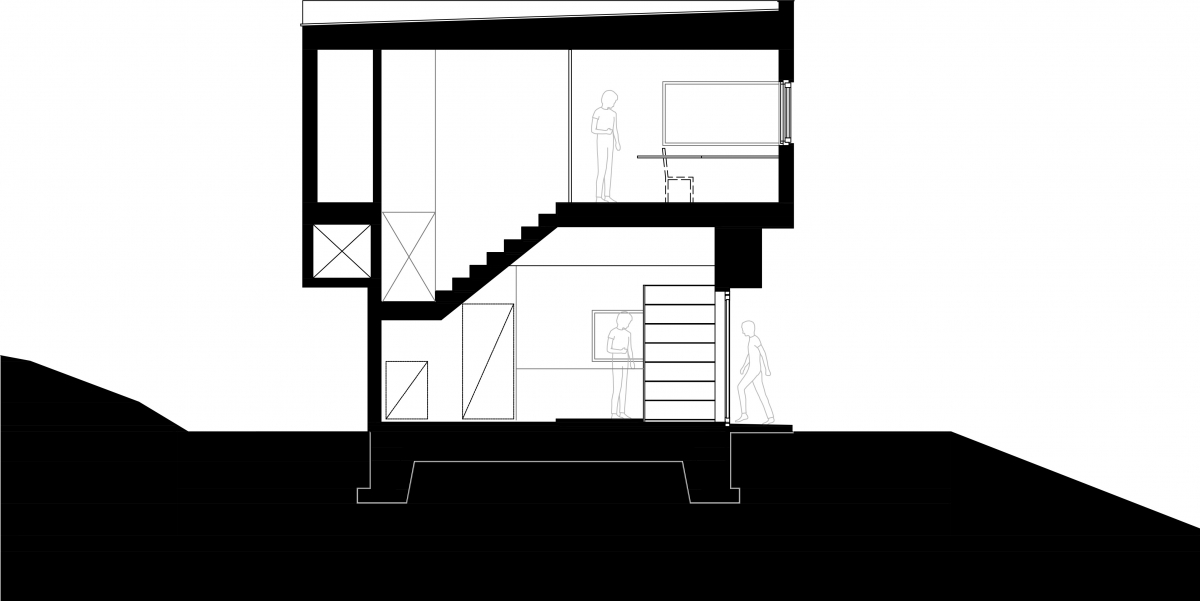 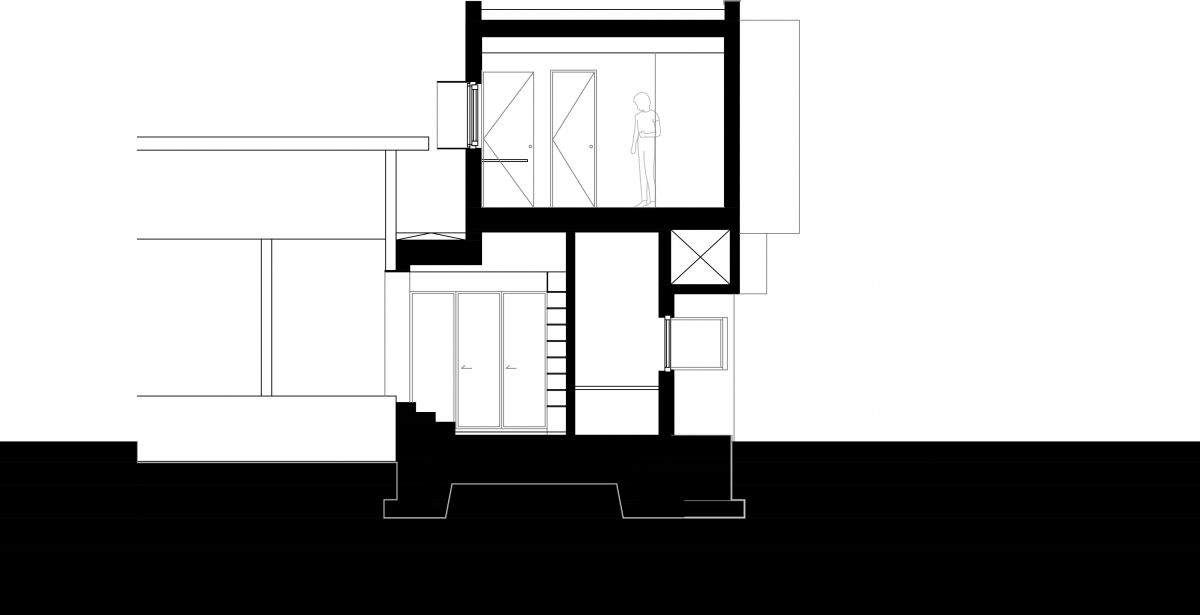 Kim Youngbae
Kim Youngbae graduated from Daejeon University with a Bachelor’s degree in Architectural Engineering. He practiced as an architect under the instructions of Jongho Yi and Euijung Woo at studio METAA and founded his own office in 2017. His major works include One House, Control office and public toilets in Cheongna Central Lake Park.
Lee Jeonghwan
Lee Jeonghwan completed his bachelor’s degree in Architectural Engineering at Seoul National University of Technology, and received the master’s degree in Urban Architecture from Sungkyunkwan University. He joined Drawing Works in 2019 after practicing at Kimwon Architecture for 10 years in. His major works include the 100th Anniversary Memorial Hall of Gyeonggi Girls' High School, Sinri Shrine, Stork Rock, and Taebaek Mountain Literature Museum.
single house residence mountain forest dwelling farmhouse curved wall cantilever manufactured furniture
LIST
bookmark_border
favorite_border
47