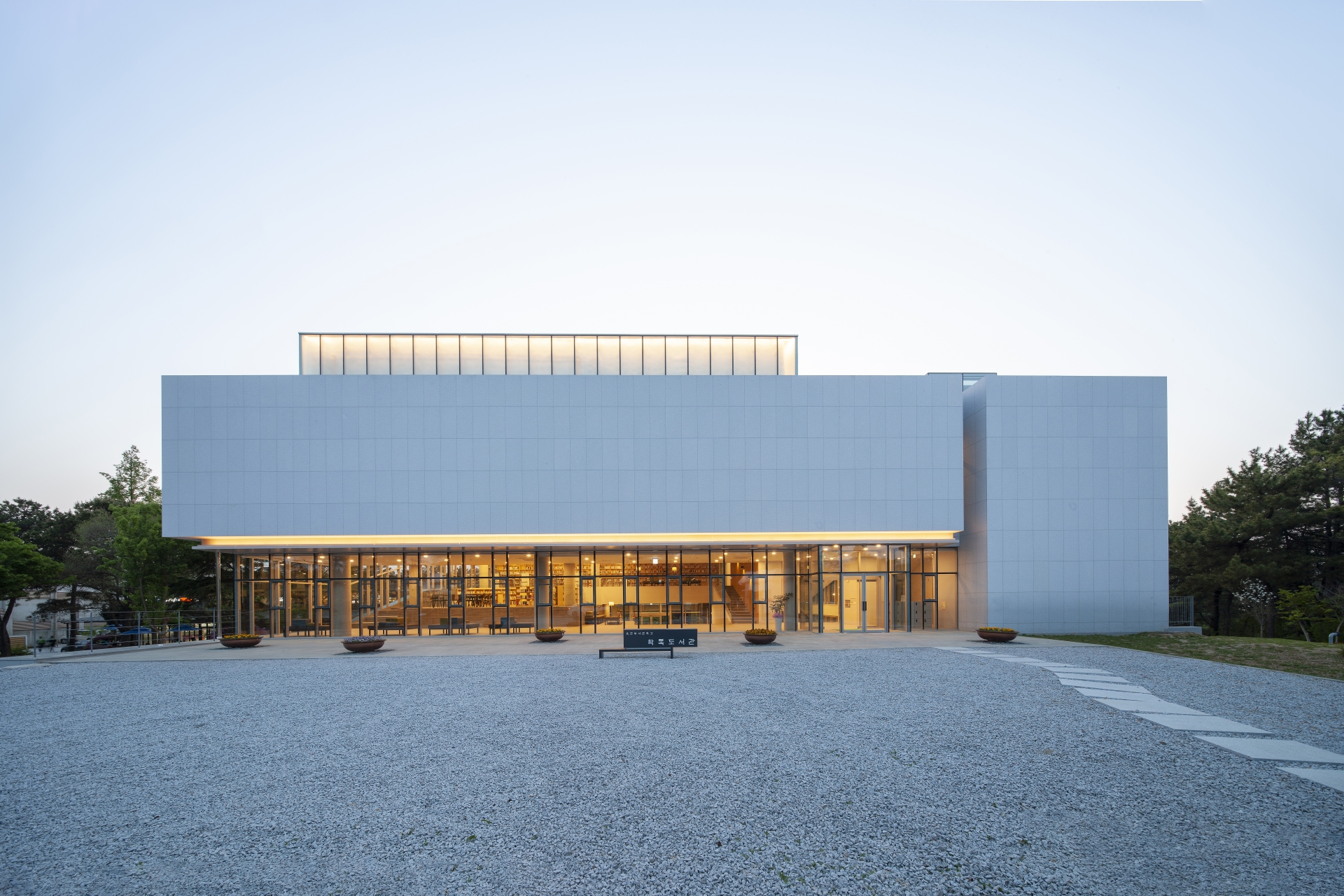 The Library of Light and Modernity

The Hakrok Library began with the suggestion that a civilian enterprise should donate an architectural project to a military educational institution. Having discussed the possible programme, a final decision was reached to build a library. This was the result of a paradigm shift, by which an educational institution, with the goal of cultivating military officials, was chosen to privilege intellectual competence as well as methods of reinforcing military might. Moreover, the donor decided to personally commission and specify a constructed library coupled with an agreeable surrounding environment, rather than take the easy route of simply providing the funds to build a library. It was at this point that I was commissioned by the donor to design the project.

It is said that Michelangelo conceptualised the maxim of ‘mounting high towards wisdom and clarity from the underworld of ignorance and the obscure’, while designing the Laurentian Library in Firenze. Upon entering the first floor, one can see that the entrance in which light is restricted opens up into a long and bright rectangular reading area upon mounting along the stairs. As such, the Laurentian Library reveals Renaissance inspirations not only in the symbolism of the library, but also in its means of spatial composition.

One desire while carrying out the Hakrok Library was to achieve a modern reinterpretation of Michelangelo’s concept of a library. More specifically, the project gained inspiration from first exploring how to establish a relationship between ‘light’ and its internal spaces in a modern library whose role has expanded to become a complex cultural space in contrast to that in the epoch of Michelangelo.

The site upon which a variety of tree species have established their homes, such as the flourishing Metasequoia, was an opportune site upon which the new architectural project could harmonise with natural scenery. The site level differed about 2.4m at the front and the rear, with with accessibility becoming an important element at the front and rear. It was as if there was the possibility of establishing a multi-dimensional spatial structure using the topography. As a result of using these conditions, a continuing spatial structure was envisioned, which would mount and entwine the skip floor around the symbolic central space flooded with light. With serene natural light falling from the circular ceiling at the centre of the building, horizontal ceilings were inserted in the walls to allow more a dynamic natural light effect. These sources of light would blend together to create a sense of change in the interior. The central hall, lying at the centre of such chance, would become not only a vertical space of light traveling down from the ceiling, but also a space of circulation established by the diagonal flow, and a space in which it would be possible to visually experience the surrounding natural scenery.

From the viewpoint of the programme, from the first floor cafeteria, moving through the central hall, the open reading space and the leisure area would continue into the somber reading spaces and the stair reading spaces, following up the sky stairs made of semi-transparent glass, to experience the cine-library and exit by the rooftop garden, finally meeting with the vast natural scenery; concluding this story of space.

While the interior of the Hakrok Library has a spatial composition established through the layering of different flowing elements of light, circulation, and line of sight, the form of its exterior aimed to directly convey the story of this flow, established through the meeting of the architectural section and topography. The oblique sense of dynamism in the skip floor form of the Southern side became a façade, while the northern side fully discloses itself on the façade through the scene of the first floor cafeteria, the form of the skip floor and the reading area meeting together. On the other hand, the transparent lower floors and the floating horizontal volume contrast on the eastern and western sides. By adding a sense of depth at the entrance, the design directs one’s line of sight towards the project’s interior. A semi-transparent glass volume has been placed upon the transparent lower floors and the floating intermediary floors. This concludes the entire formal composition. The semi-transparent glass volume on the upper floors symbolises the ‘light’ of the library, generating the image of a ‘cultural lighthouse’ which lights up the local community when the lights illuminates the evening hours.

The Hakrok Library arrived at its present state after many difficulties throughout construction. However, I would not say that the project culminates at its current state of completed construction. External to its architecture, the Hakrok Library has the potential to influence the culture of the national (or social) institution of the military and the local community. All sorts of military personnel will pass through this library, from the official military candidates who have just entered to be commissioned to the military officials who will enter into residency for training in different units throughout the country. With the accumulation and dissemination of such experiences, I hope that military society will also benefit from a positive impact by establishing a sense of awareness that good cultural facilities can be established in the units, and that as a consequence an individual unit’s overall welfare and cultural life might be improved. I hope this becomes a larger project. Also, I hope that it will extend its domain as a facility that shares its riches with the local community lacking in access to comparable cultural facilities. 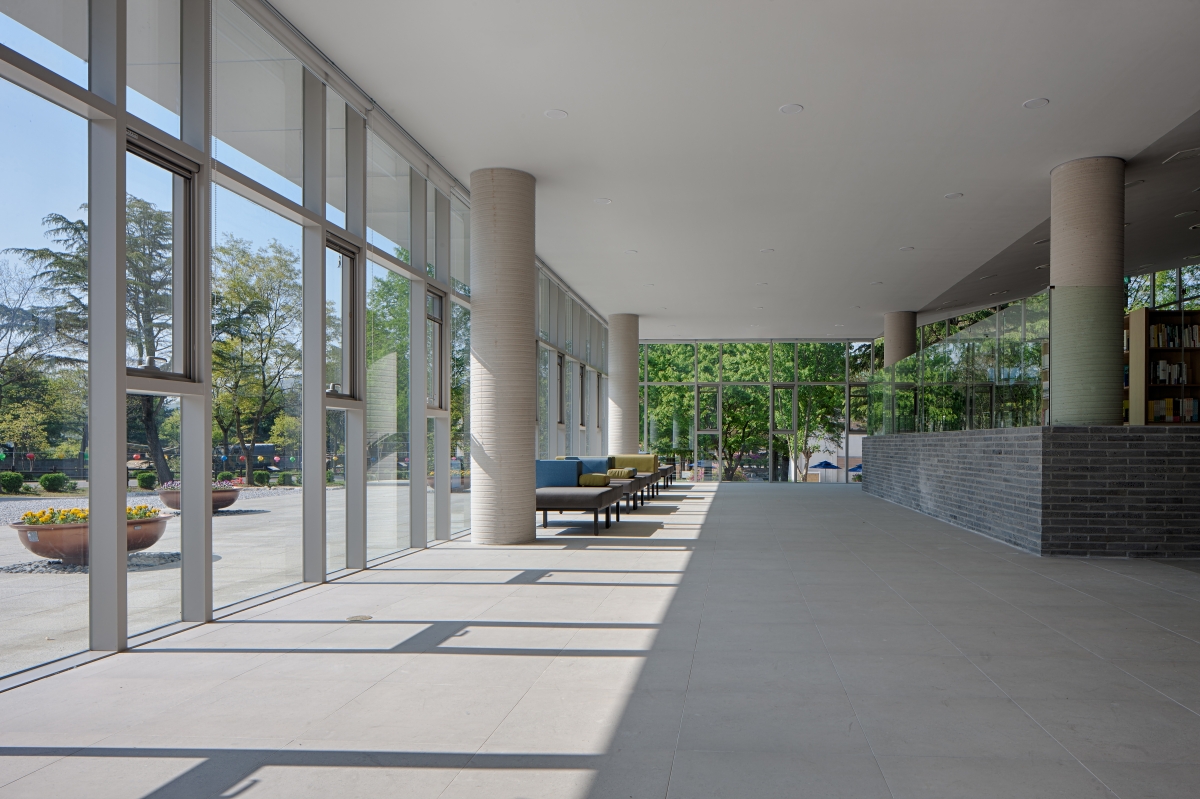 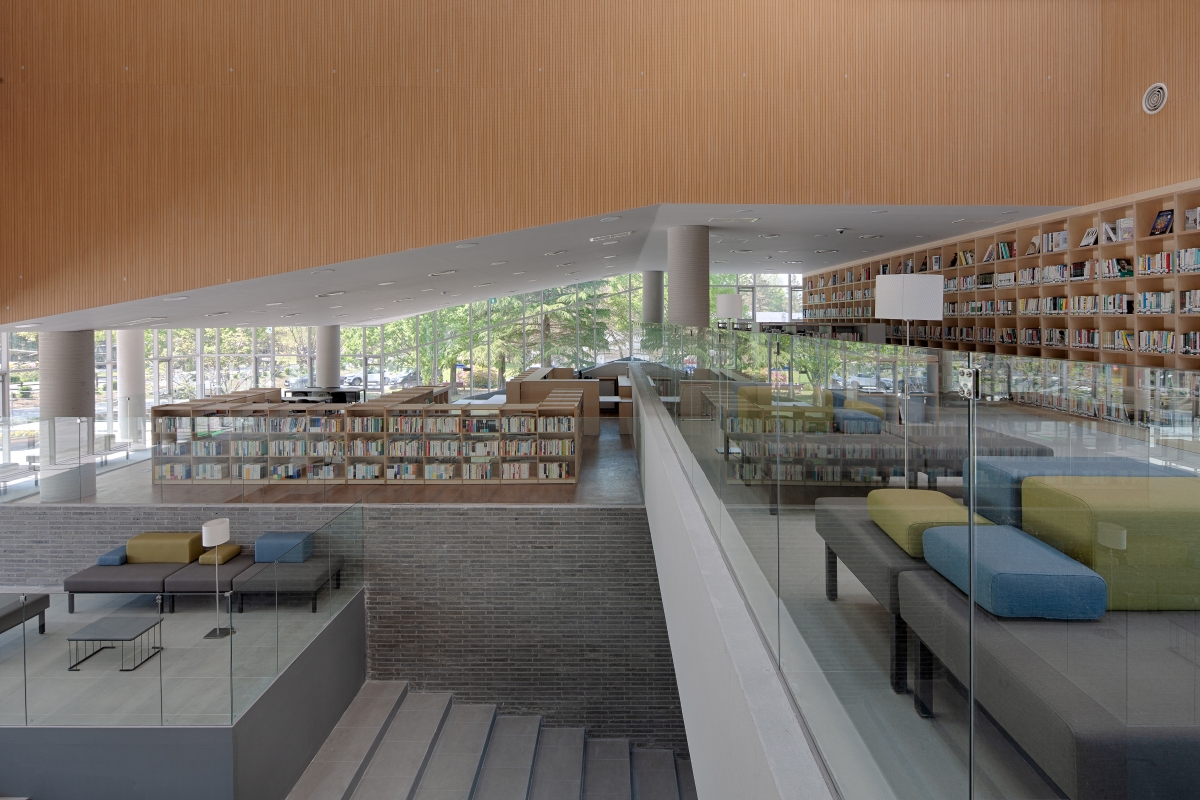 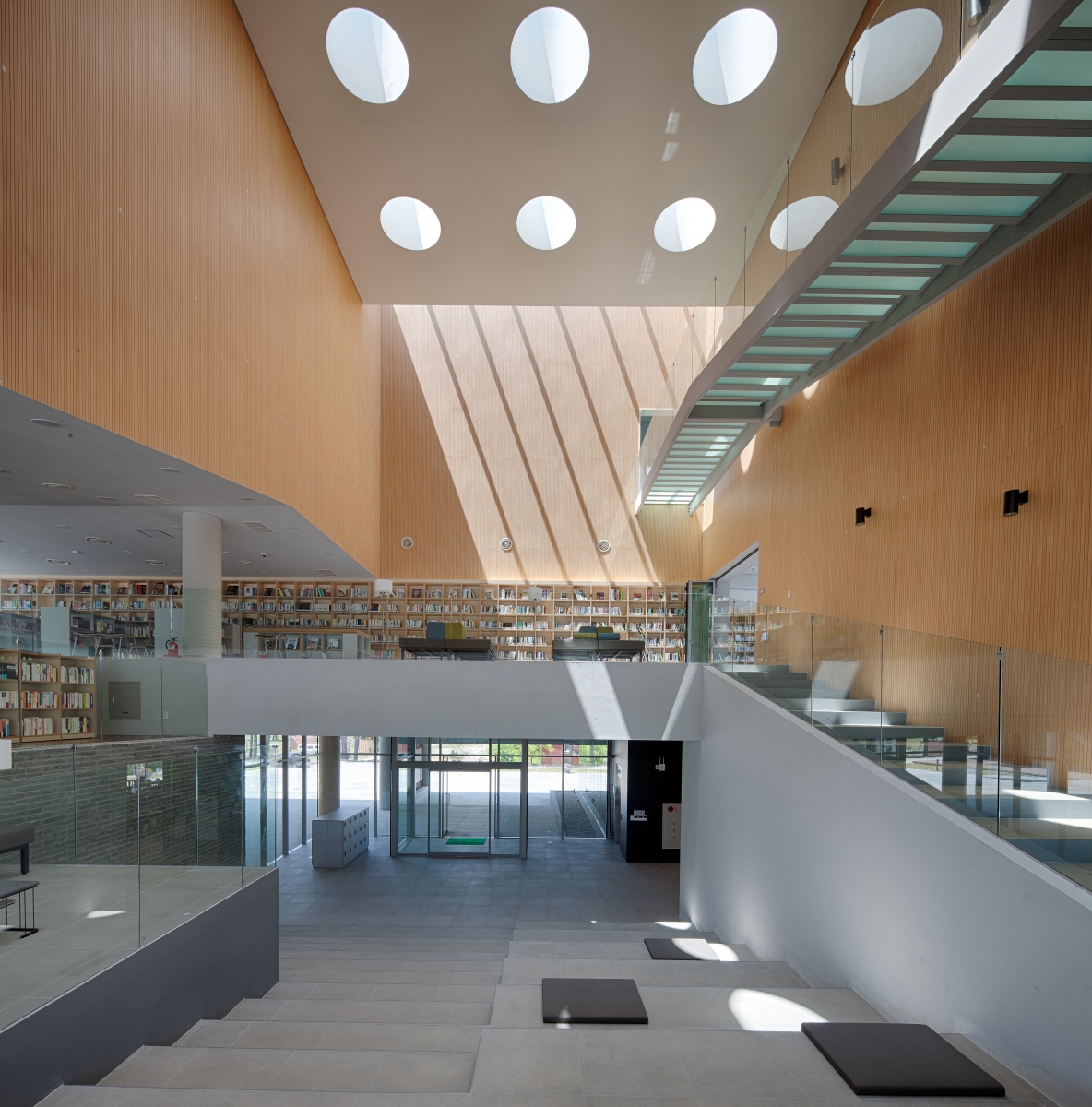 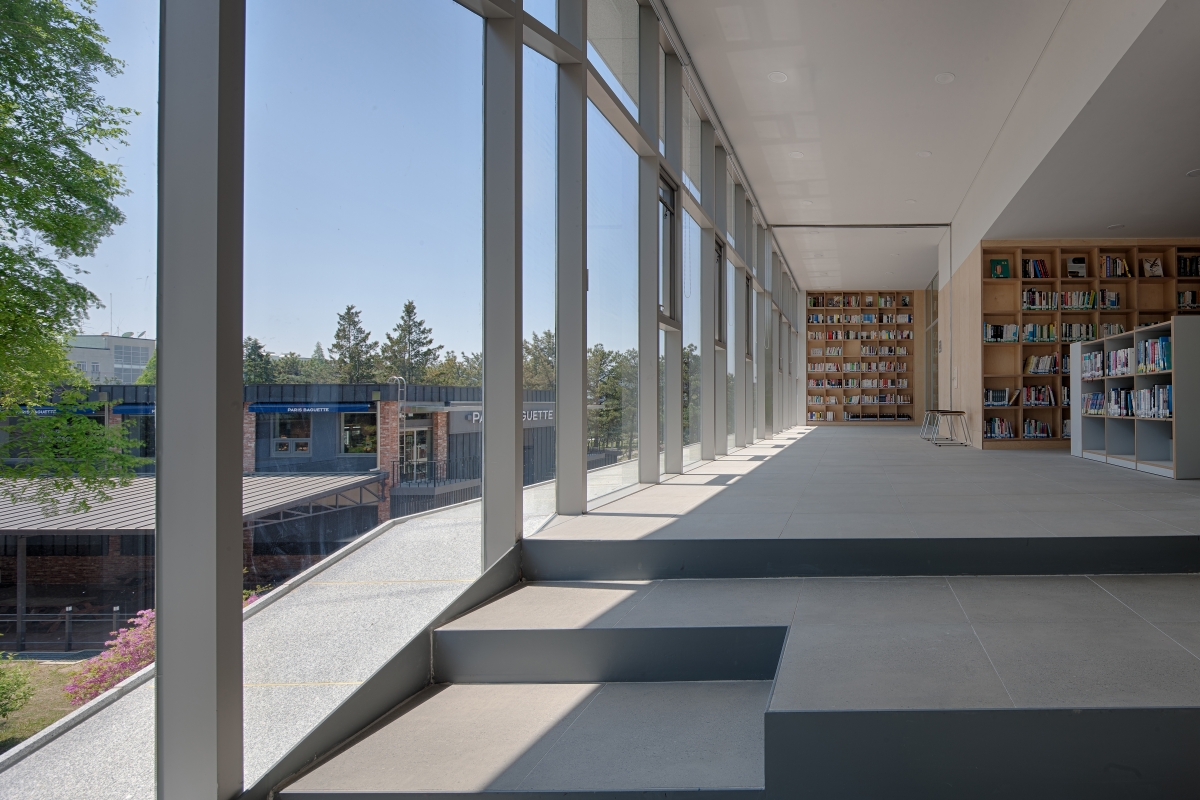 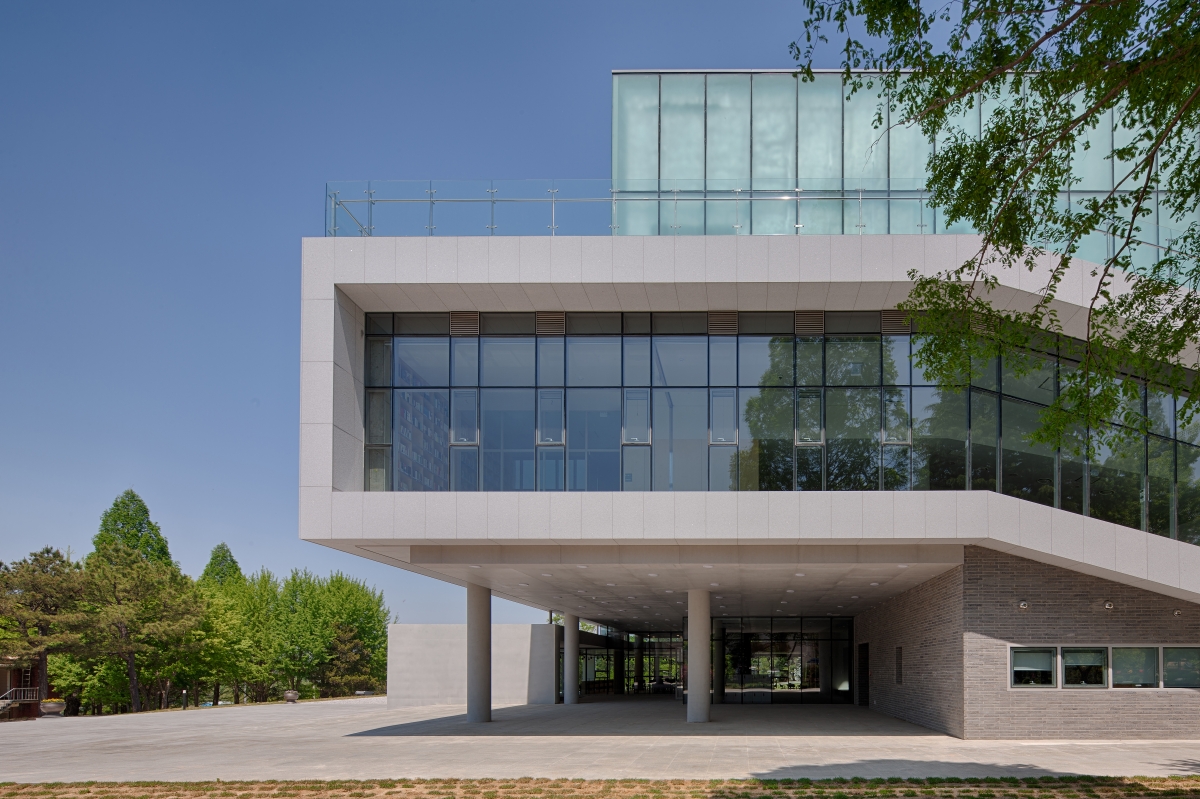 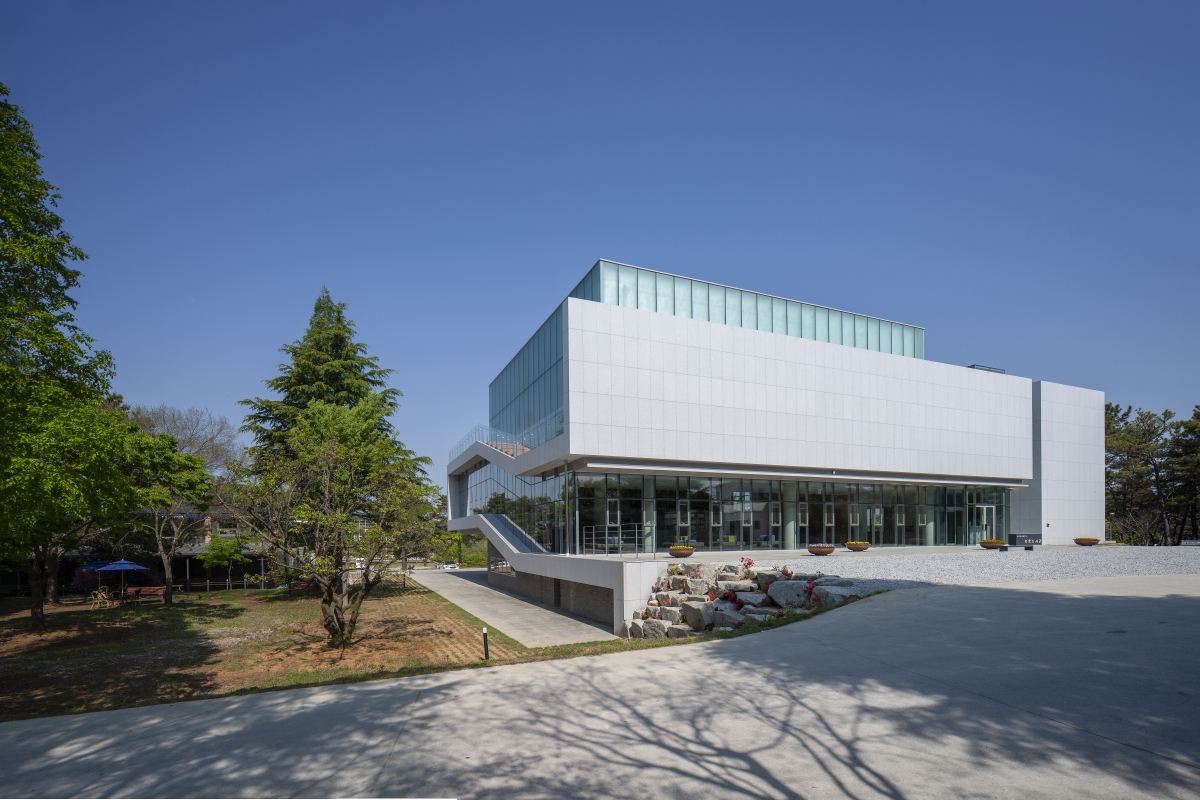 Lee Sangdae
Lee Sangdae studied architectural design and theory at Yonsei University and Ecole Nationale Superieure d’Architecture de Paris-Belleville. After working at Hanul Architects & Engineers and KUNWON Architects Planners Engineers, he is now practicing as the principal of Spaceyeon Architects. After serving as a Public Architect in Youngju city, he is now serving as a Public Architect in Seoul Metropolitan Government and also teaching architectural design at Yonsei University. Based on his interest in architectural space with natural light, he is designing various projects in public and private domain. He won the Excellent Award in the Korea Remodeling Association Award, the Main Prize in the Korean Rural Architecture Competition, and the Highly Commended Award in the Seoul Architecture Prize.
No.623 October 2019 architecture Hakrok Library Spaceyeon Architects Spaceyeon Lee Sangdae library cine-library Non-Commissioned Officer Academy light well
LIST
bookmark_border
favorite_border
51