Hongje-dong has a relatively large elderly population. In front of the existing houses, the elderly used to sit on the benches and spend some time together. The newly planned Hongje Community Center was intended to serve as a community space for these seniors, as well as a public facility for the local residents.
The building was extruded from the simple square shape, and the upper mass was slightly skewed towards the west. As a result, the second floor balcony was naturally created on top of the lower mass that is pushed to the east side, and the canopy was formed by the upper mass that protrudes to the west side. Under the canopy there is a wooden deck, which is connected to the open space located on the west side of the building. This is a public terrace where people can gather and take a rest. This will create a similar scene from the past, when the elderly used to sit around in front of the houses before the community center was built. 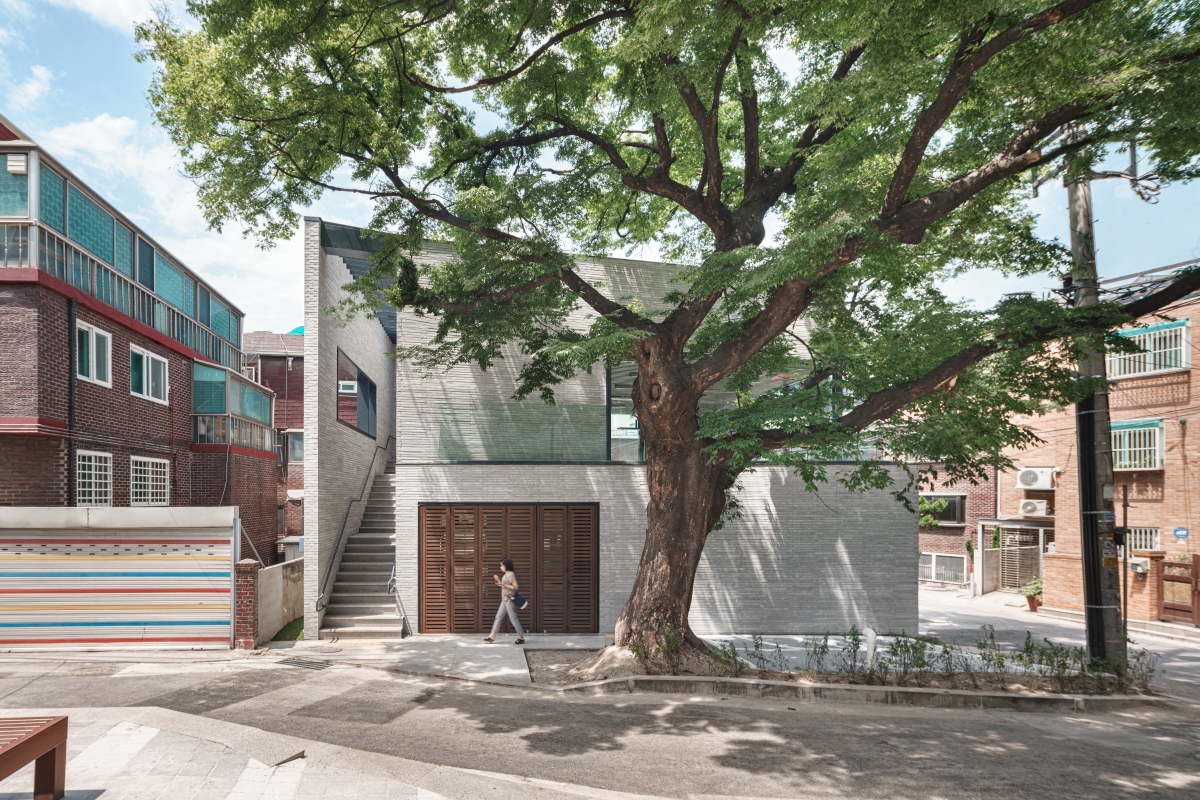 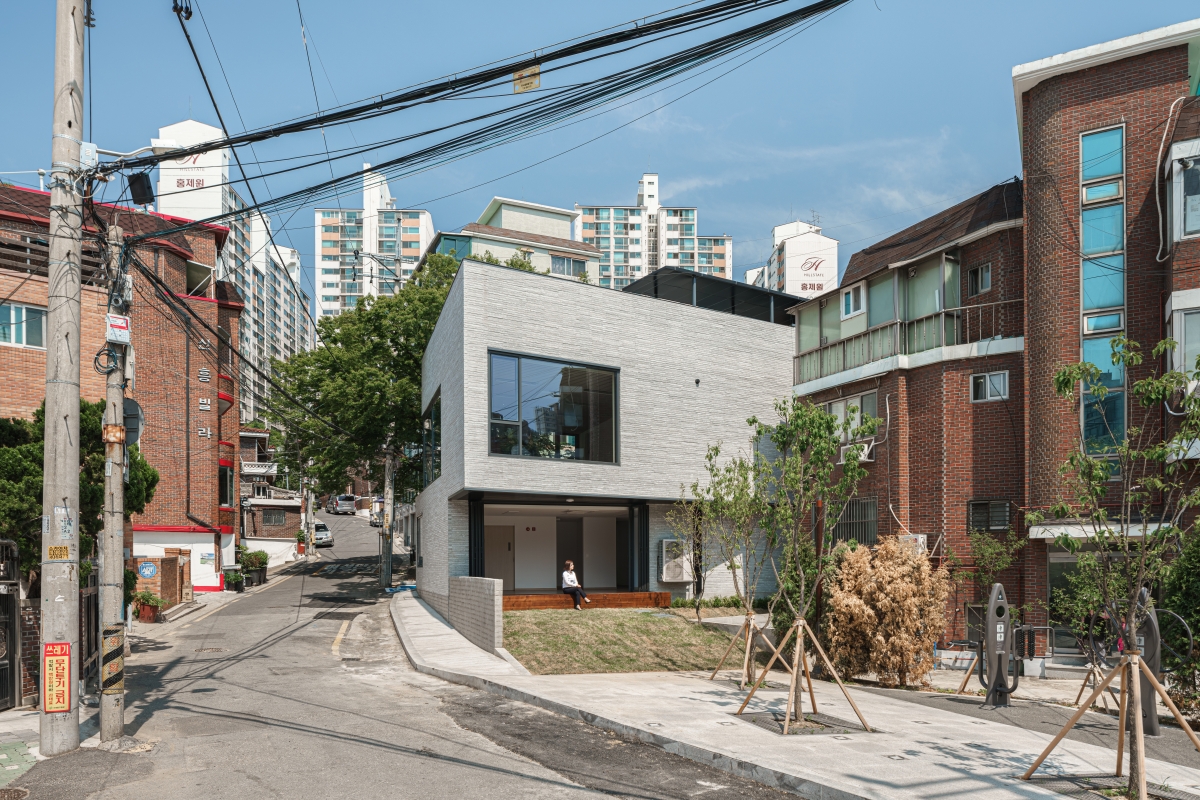 The existing houses had old roof tiles made of cement. In order to maintain the materiality of the existing buildings, concrete bricks were used as a main cladding material. The large corner window across the east and north side articulates the massing pushed toward the west more clearly. The wooden louver door at the main entrance can be fully opened as needed, or closed when the first floor is not being used. This satisfies both functionality and aesthetics. On the left side of the main entrance, there is a vertical stairs towards the second floor, where the versatile pattern of shadows are created by the sunlight passing through the skylight with the metal louvers.
The first floor is designated for the elderly. The entrance to the men's room, located on the south, consists of two large sliding doors. When the door is closed, it serves as a wall, and when fully opened, the living room and the men’s room are opened as one space. The living room is connected to the west terrace via the folding door. When the folding door is fully opened, the boundary between the inside and outside diminishes. The second floor is planned as residents’ public facility, which can either be used as a café or hold various events such lectures, physical activities, etc. The white louver installed on the ceiling of the second floor complements the simplicity of the large open windows on all three sides of the room.
The Hongje Community Center will provide a space where the local residents can gather to form a community and relax, and will be able to host events and bring vitality to the area. 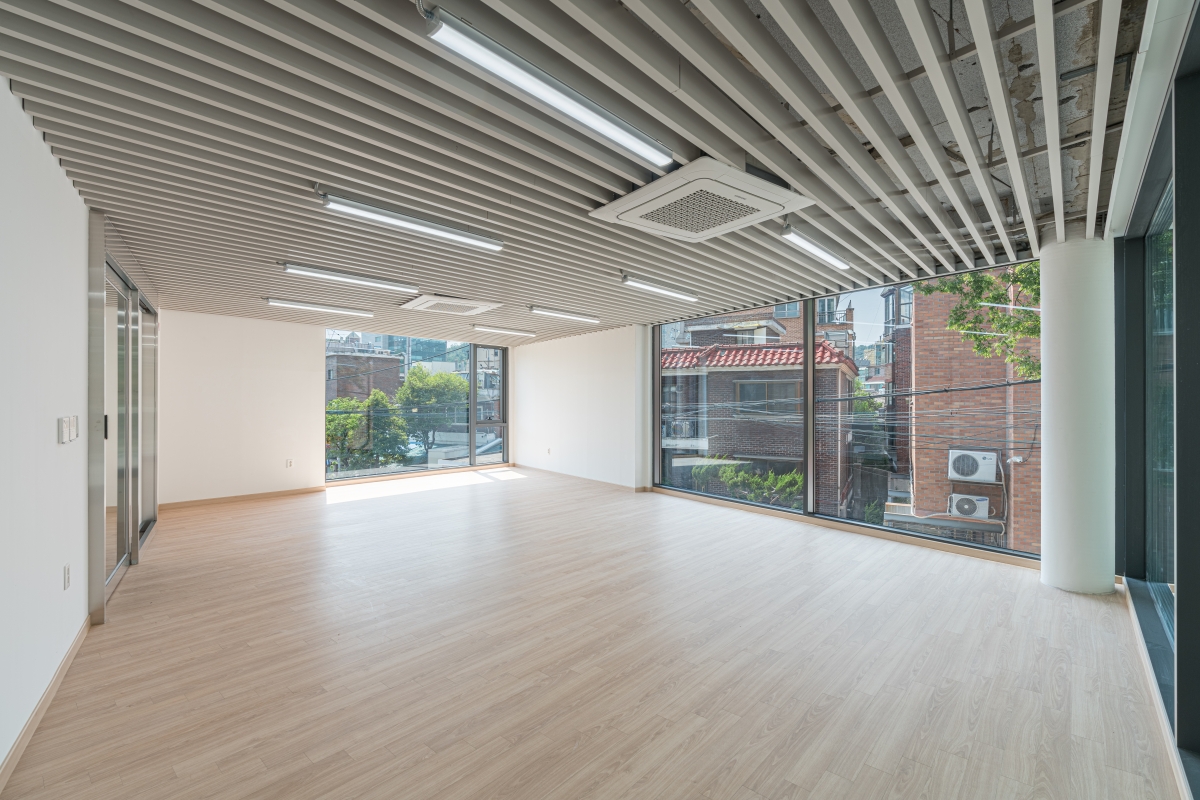 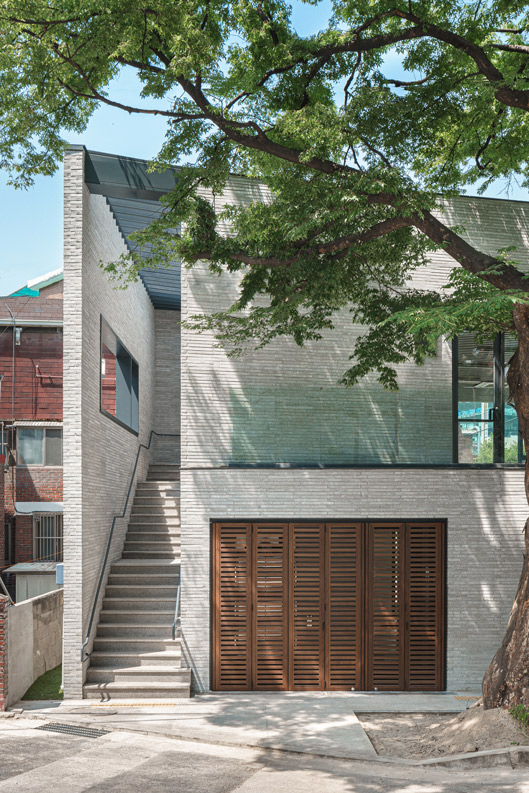 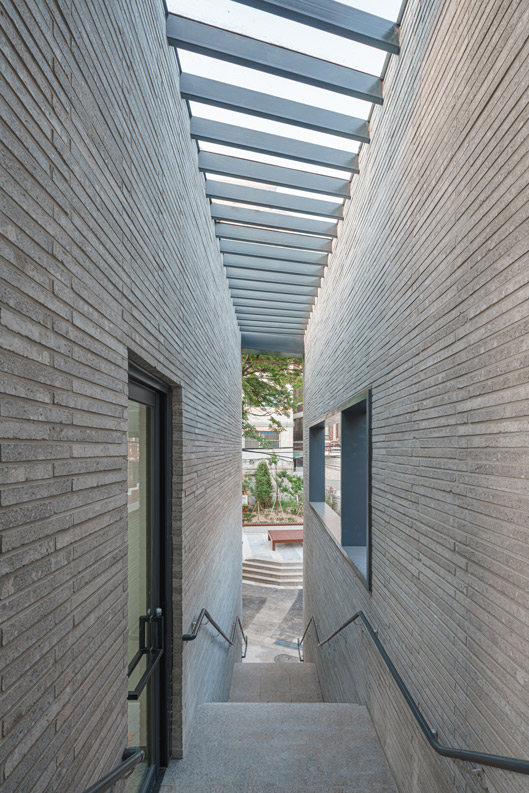 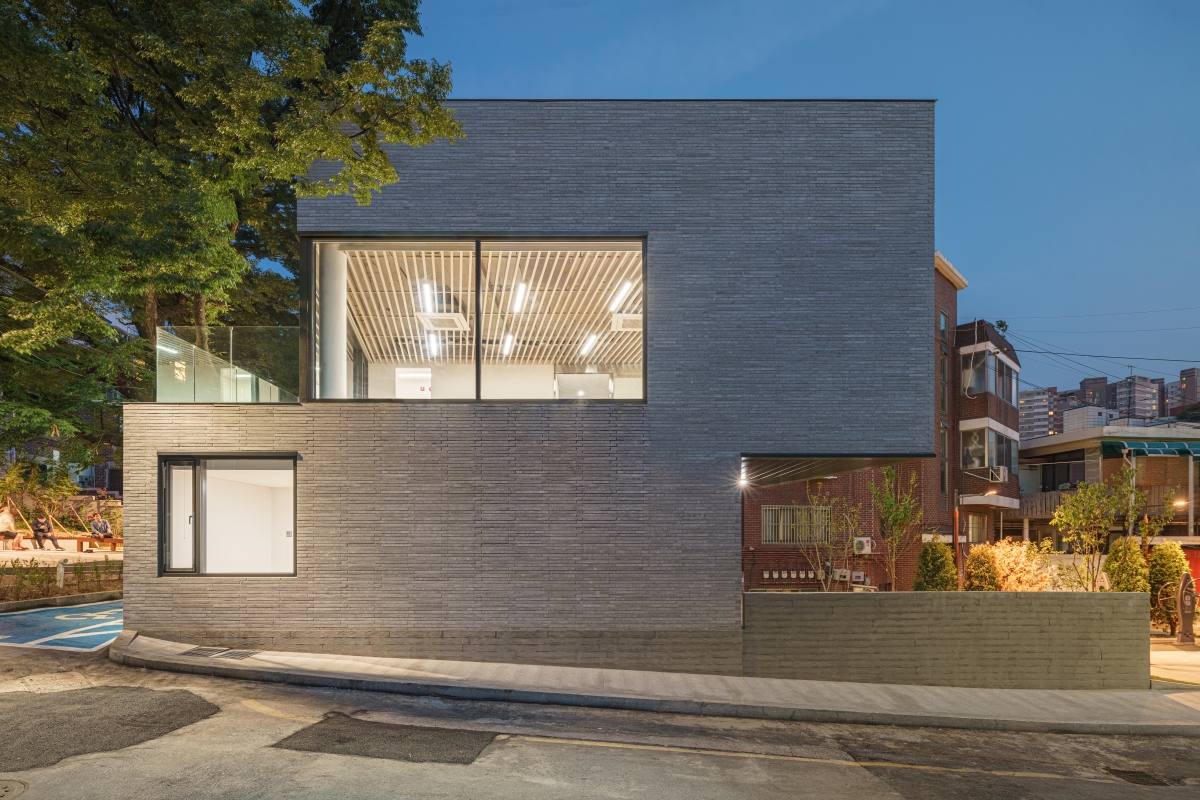 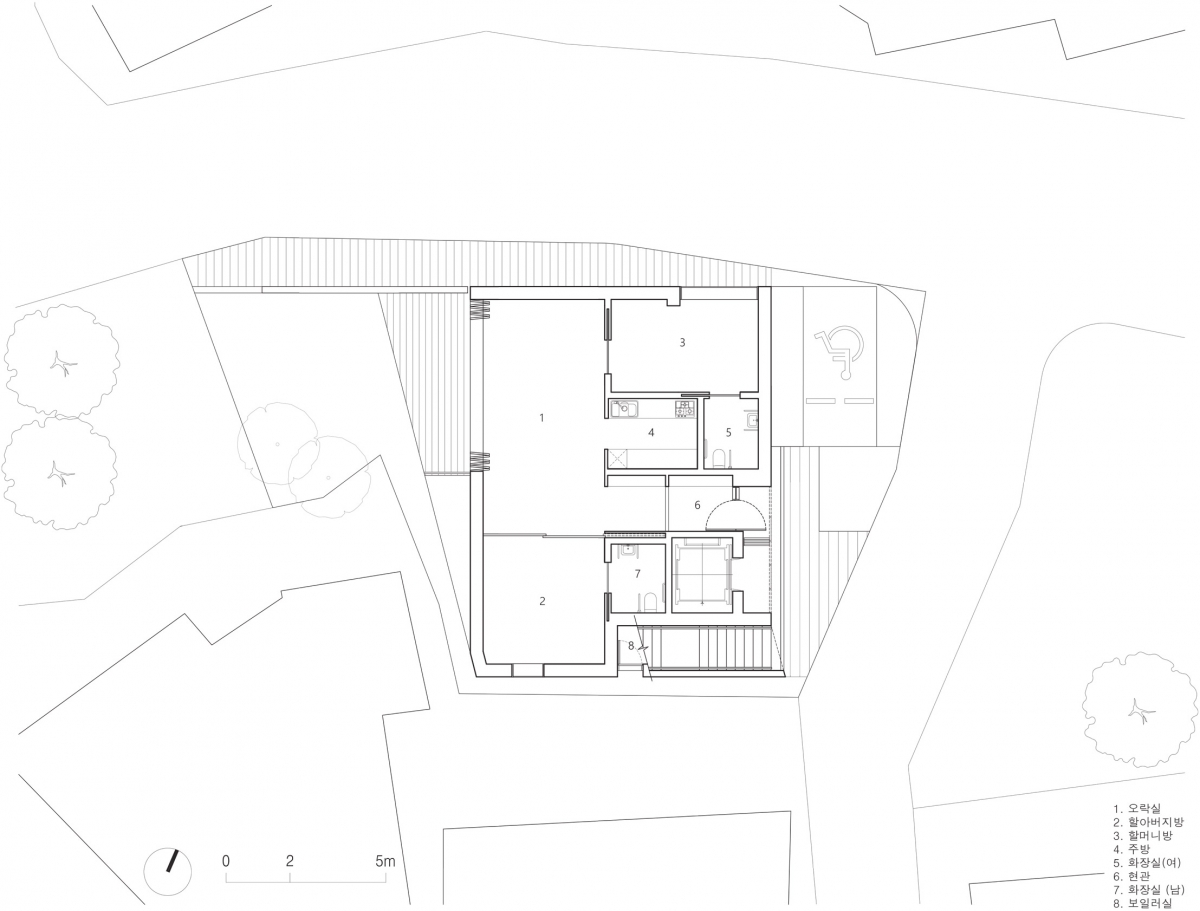 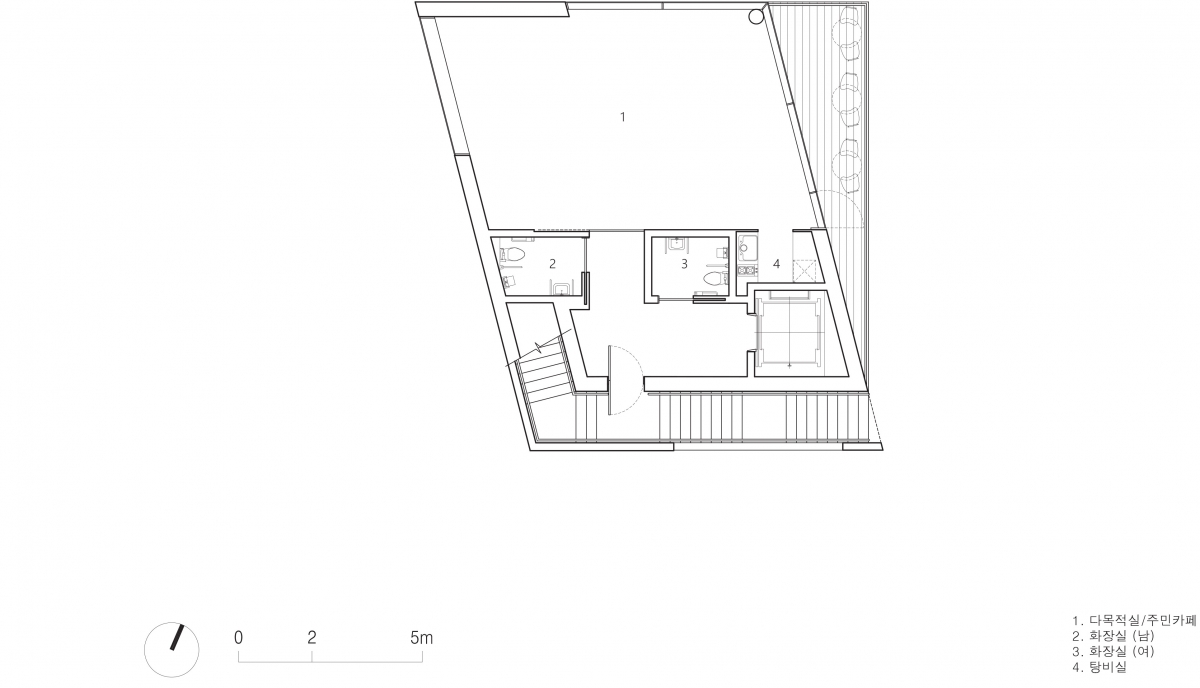 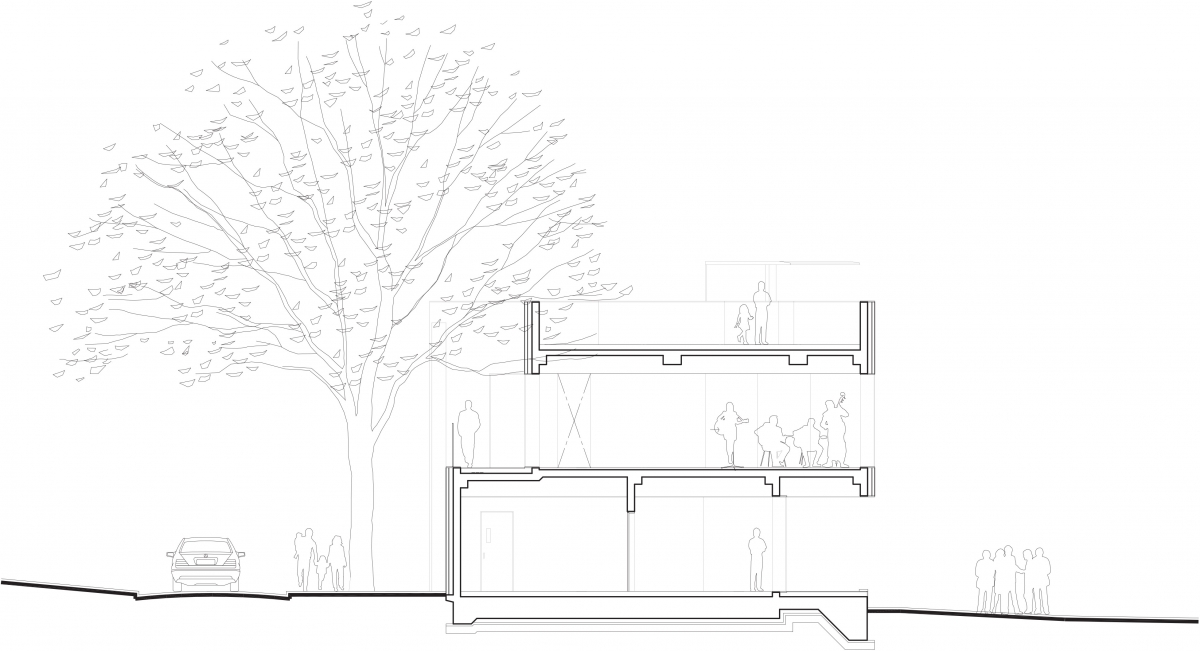 Chung Whan Park
Greg Chung Whan Park is a principal of Simplex Architecture as well as a professor at Hongik University. He received his Master of Architecture from Harvard University in 2011 and holds a Bachelor of Science in Architectural Engineering from Seoul National University. He began his professional career working at Mass Studies in Seoul, where he gained experience in a wide range of projects. He continued his career at Richard Meier & Partners and Asymptote Architecture, leading the design effort on Seamarq Hotel, Vitrvm Residential Towers, and ZIL Tower as a Project Architect. He is a registered architect in New York and a member of the American Institute of Architects as well as a LEED accredited professional, and Public Architect of Seoul Metropolitan Government.
Sanghun Song
Sanghun Song is a principal of Simplex Architecture. He received his Bachelor of Architecture from University of Seoul. He has held primary roles on a wide range of projects including Pangyo Nature Center, Crystal County Club House in various firms in Seoul, Korea, as a Project Architect. He is interested in a wide range of design field including Urban Design, Architecture, and Landscape Architecture.
Hongje Community Center community senior facility balcony canopy louver public terrace public space
LIST
bookmark_border
favorite_border
25