A House for Cohabitation

MoYeoGa means a house in which to live together, but it also means ‘to gather’ in Gyeongsang-do dialect. In reality, 30 members of 8 families here gathered to discuss the project with their architect, select the final site, and to determine the house design.

It first began with two families. Oh Sinwook joined forces with an old acquaintance, who dreamt of a house for living together and had long been an occupant in collective housing for cooperative childcare. More members joined one by one to eventually make up eight households.

It was not easy to match up each other’s needs at the beginning. Some were worried about leaving their apartments and others were reluctant to share their terrace with others. The residents gathered to deliver their opinions on living together and tried to address each other’s complaints, and as a result even the share in space was adjusted.

It occurred to me that, aside from the difficulty in the process behind constructing this house, there would be a lot of problems after beyond occupation, such as maintenance and cleaning as they don’t have a caretaker. However, MoYeoGa’s residents said that there is no difficulty in tackling the cleaning and fixing as and when necessary. It felt like a natural and open process, of note particularly when the construction site manager who visited with me conversed with the residents on details of the building. Showing a book about community life to me, one of the interviewed residents revealed that the merits of community described in the book seemed exaggerated at first, but now it had come to be experienced as a reality. Someone told me about a noise complaint that had arisen regarding a resident who plays the drums. However, it had become acceptable once they were living everyday face to face, in the same space.

MoYeoGa’s architect has managed to put two contrasting ideas in one project: to have one’s own space and to live together. The opinions of the families and individuals were reflected in the design and a natural network has found realization in their efforts. As a result, people are creating a community, and have become gradually accepting of each other.

To create a new type of multifamily housing different from the existing apartment houses, architects must focus on the relationship between the exclusive area and non-exclusive one. Here, they blur the boundary between the two areas and insert intermediate or transitional spaces. They adjust the closing of the exclusive area itself or alleviate it at various connection points. They have also planned a special meeting space. The focus is on how much remains closed or open, so that people can encounter these shifts at a natural pace. 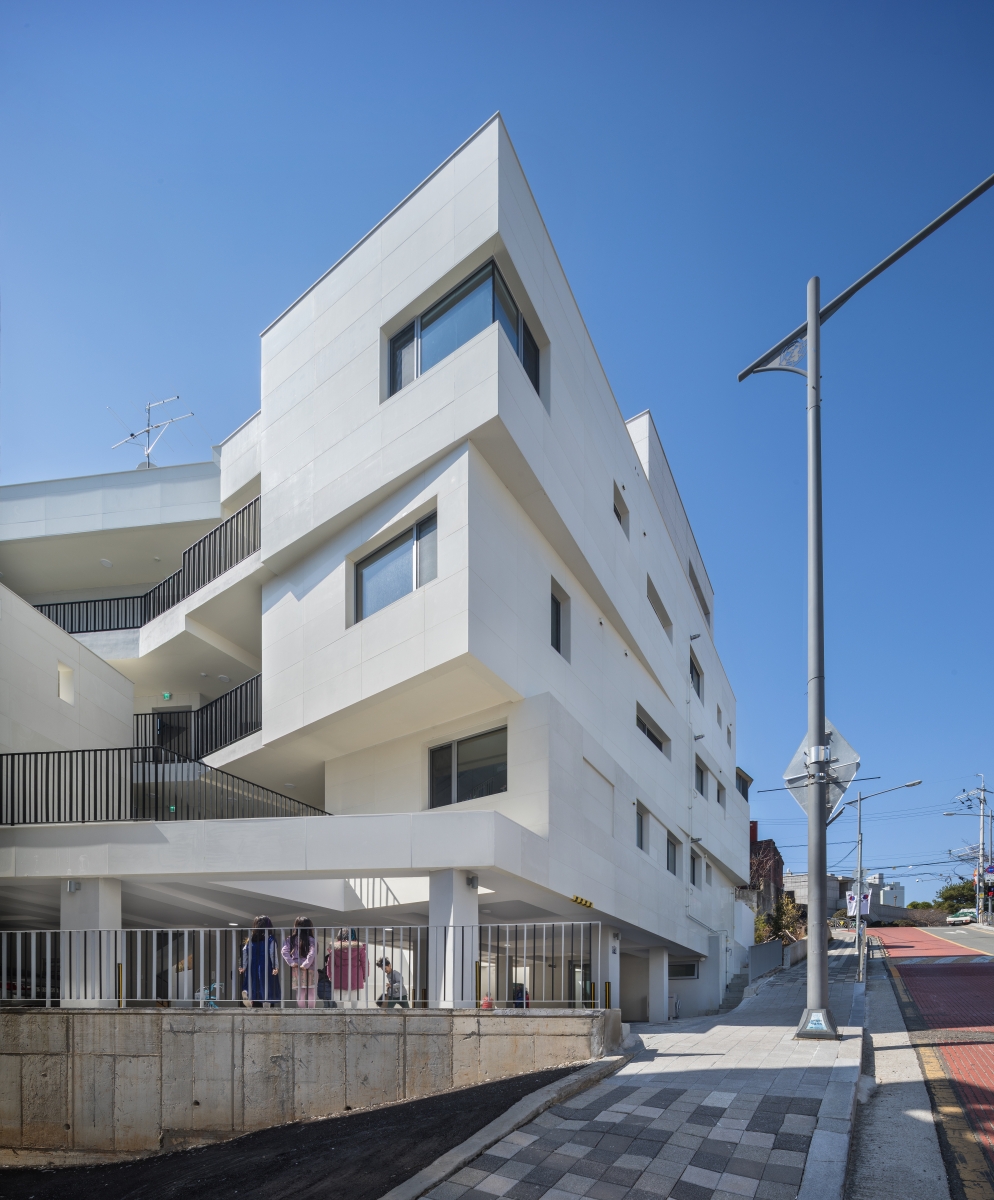 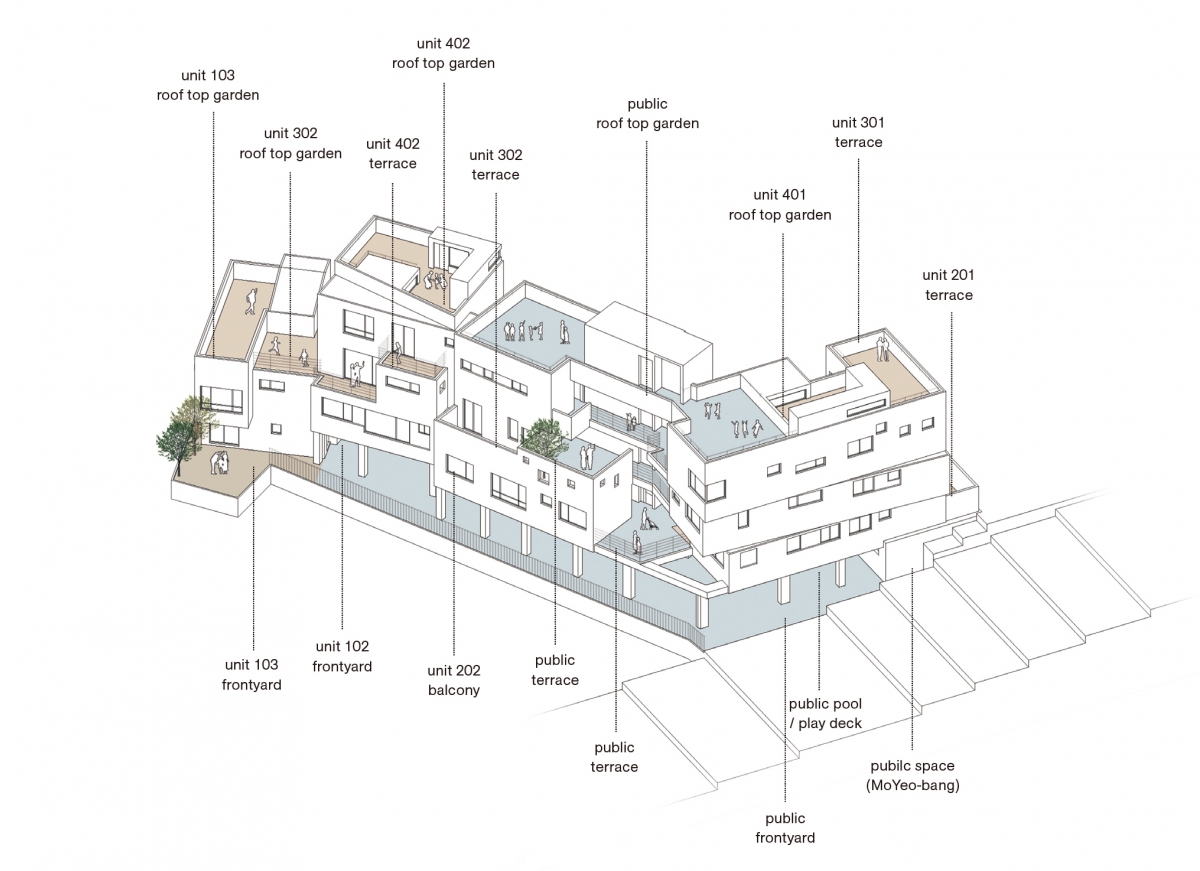 MoYeoGa’s architect was devoted to applying his experience to the project rather than embarking on a new adventure. His approach in MoYeoGa is similar to that of previous projects such as InterWhite (covered in SPACE issue 579). In this project, the stair landing was widened to adjust the stairs to fit in the irregularlyshaped site. The stair landing is wide enough for two people to sit and have a chat. At that time, the architect said that he wanted to make this residual space useful in some small way. It is a corridor and a passageway with another function after this subtle change, and this idea was expanded upon in MoYeoGa. Shifting each unit little by little, he made part of the corridor lying between two units more spacious, while the wall inside the unit is not straight, providing a different purpose here and there.

Making something different by subtly shifting the wall; introducing this change and additional use to the typical function of a hallway; this is how MoYeoGa has been designed part and whole, and how the units and common spaces have been planned.

Architect Oh created two boundaries in the unit. The first is through windows and openings, some of them offering views through the windows or opening towards a private garden, and others towards a shared garden or passage leading to another unit. The windows are always open towards a certain direction, sometimes open to a direction with no infringement of privacy, and sometimes towards a neighbouring unit, and the boundary can open or close selectively.

The second boundary is the public space and outdoor space of each unit, which is connected to the rooftop, garden, or to the entranceway of other unit. Some parts have been altered due to the different angles of connection, and some parts have been expanded so as to accommodate a small garden in between. A garden for a tree was added according to request, and a storage unit for fishing tools was placed in the free space in front of the house as recreation space.

The public space was known as the second boundary because it was an extension of the private space, not a self-contained, special space. An extra space for meetings has been provided on the first floor, but MoYeoGa’s defining essence lies with the fact that the private space has been extended to encourage residents to meet each other. A part of the alley has been transformed into a private space to help orchestrate such encounters, and the subtle coordination of the space means some parts have remained private and while others are shared, as if we shared everyday life by gathering around the low wooden bench as in days past. If there is a difference worth marking out, it would be the first boundary established to provide for those who are not accustomed to such a close-knit lifestyle, to help them slowly adapt to the community.

It can’t be compared to the apartment house, but the private unit itself can be made closed by adjusting its first boundary. It may be opened towards the second boundary. One comes across others a few times each day, however, more often than not people encounter each other at the second boundary, which seems a bit more private as opposed to confronting each other in unfamiliar spaces; in other words, from within one’s own space one faces others who are in their space. On the way to work or when taking the garbage out they encounter their neighbours and say hello. Then they may choose to gather at one house and drink beer together. Children also make regular contact. When a child visits another house to play with a friend and the parents call the friend’s parents to say that they will have dinner together, this often leads to an invitation to dinner too. It may also create contact points by taking turns caring a child whose parents are working at night. As such, the first boundary is opened. They visit another home through the terrace in the private space, not via the entrance.

Oh has interviewed the residents in groups and individually, reflecting on their demands faithfully; a tree, a wide entrance hall, private garden space, and a window with a view to children’s room from the living room. After the design proposal was completed, families gathered to choose their own house, and it took only two hours. It wouldn’t have been that easy, but it was claimed by many that it was easier than expected as the requirements of each member are well reflected in each unit.

The project leaves something to be desired. The architect designed MoYeoGa imagining what could happen in a certain space based on his experience of building another house, and borrowed a morphological vocabulary that would signal his name as an architect. The mass at the front along the road is the result of referring back to Inter-White. As the angle was set differently on each floor, a gap has occurred between the window and the wall due to the structure between the third and fourth floors at the rear. Even though this may be a minor issue, which also seems like it could gave an alteration made during the construction process, it appears to me to have been a discrepancy between the architect’s desire and natural architecture.

I pay my tributes and give my praise to the success of this project, but I would like to consider whether if Oh Sinwook cannot escape from what he has achieved so far by being recognised as a promising architect. I think this is an important point for Oh Sinwook in his journey as an architect. I hope he can break out of this prescriptive frame and take it one step further. 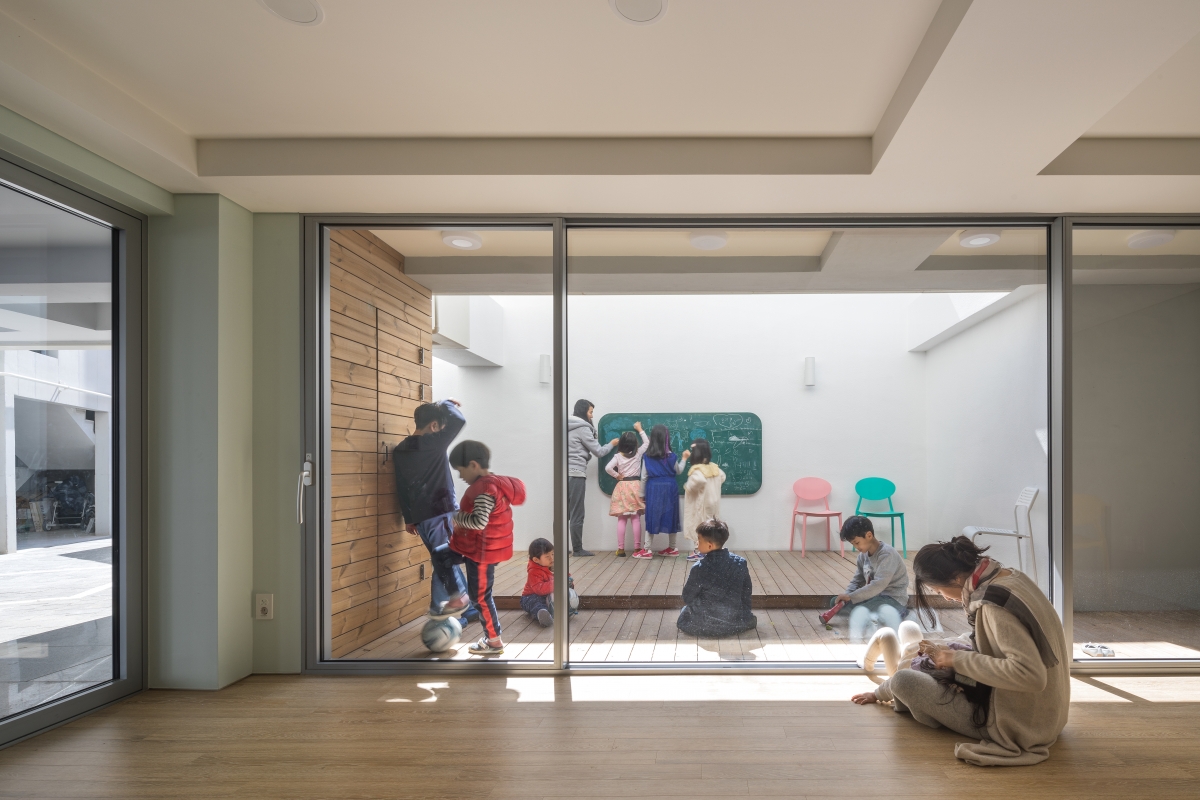 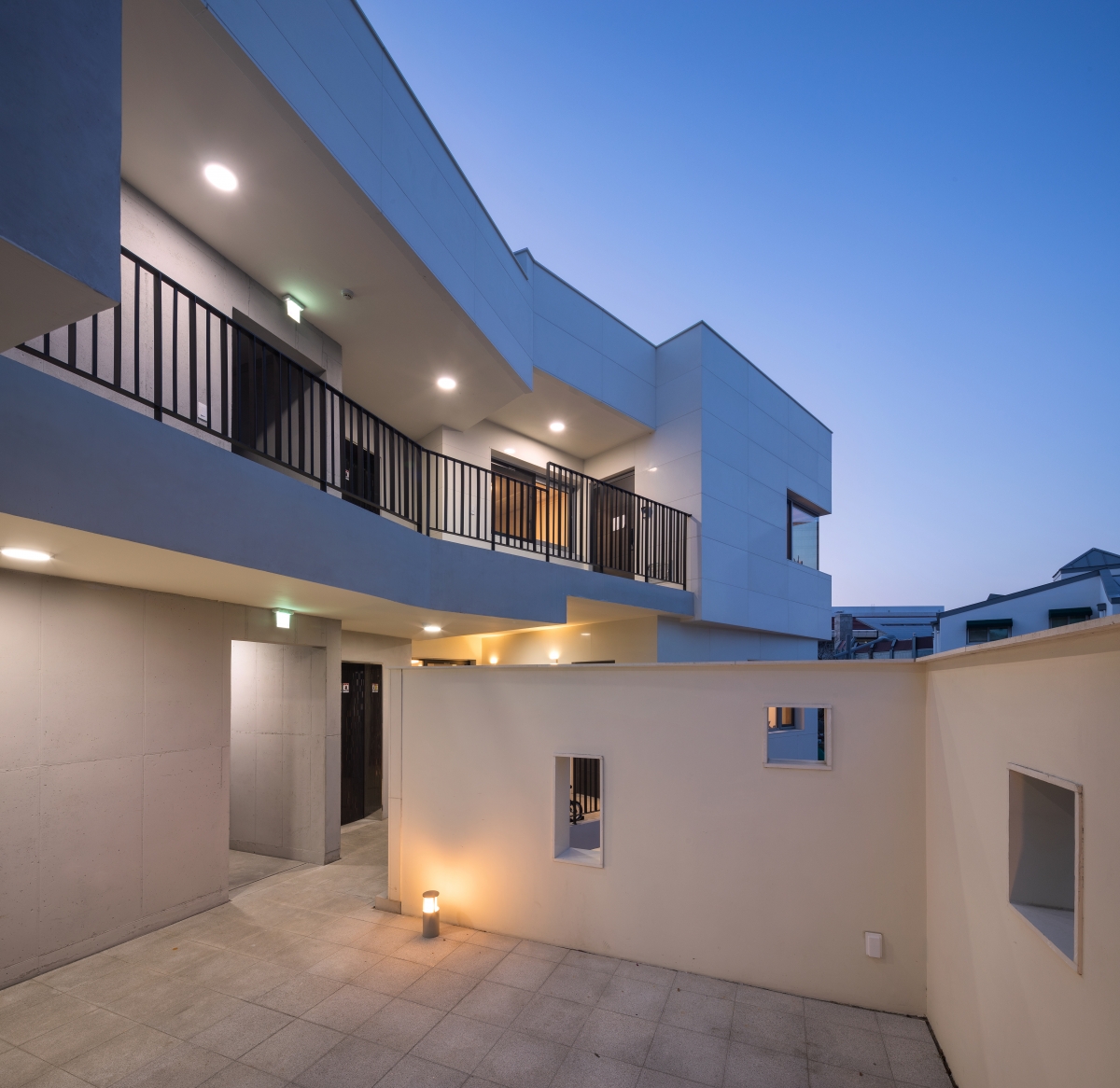 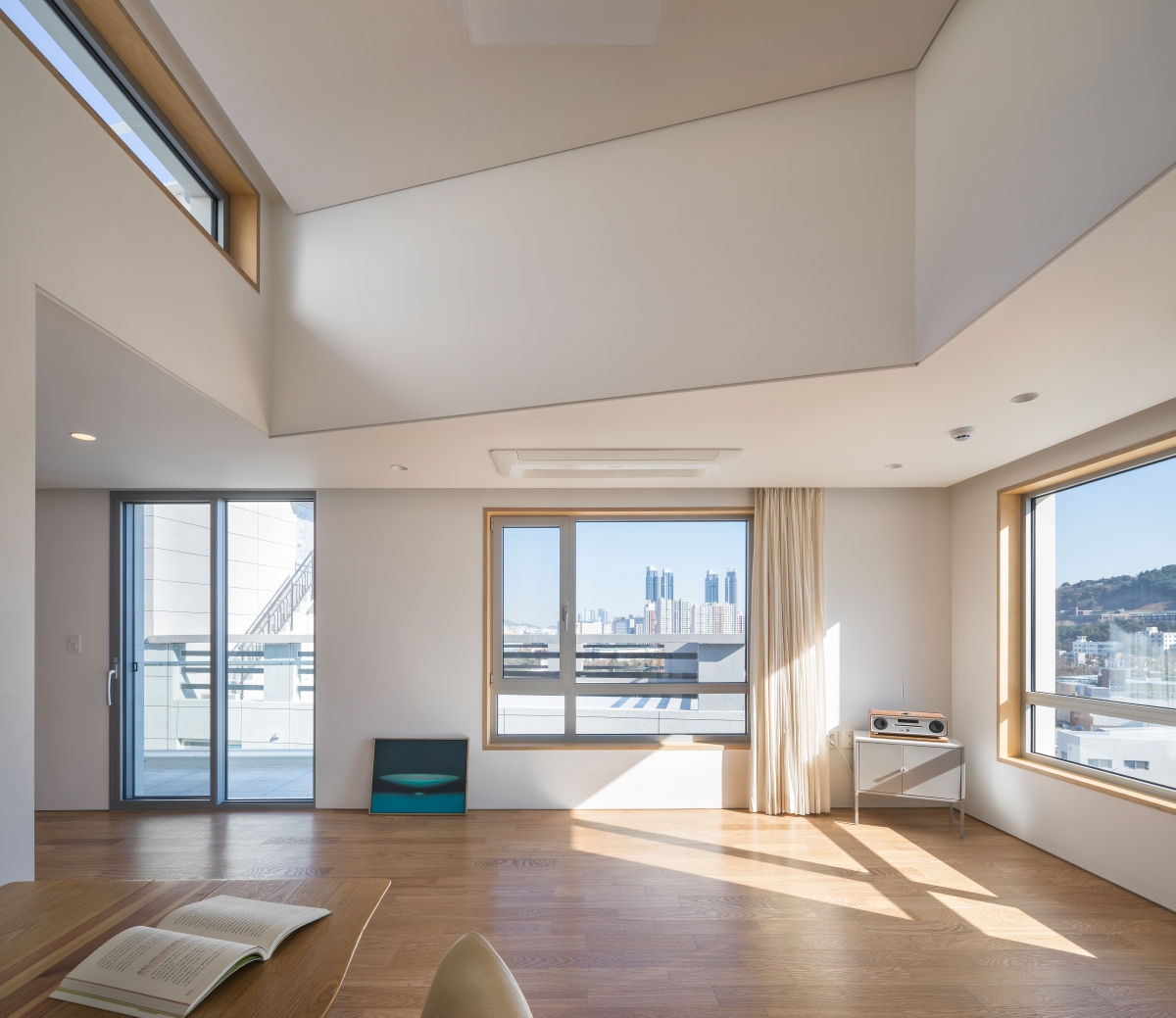 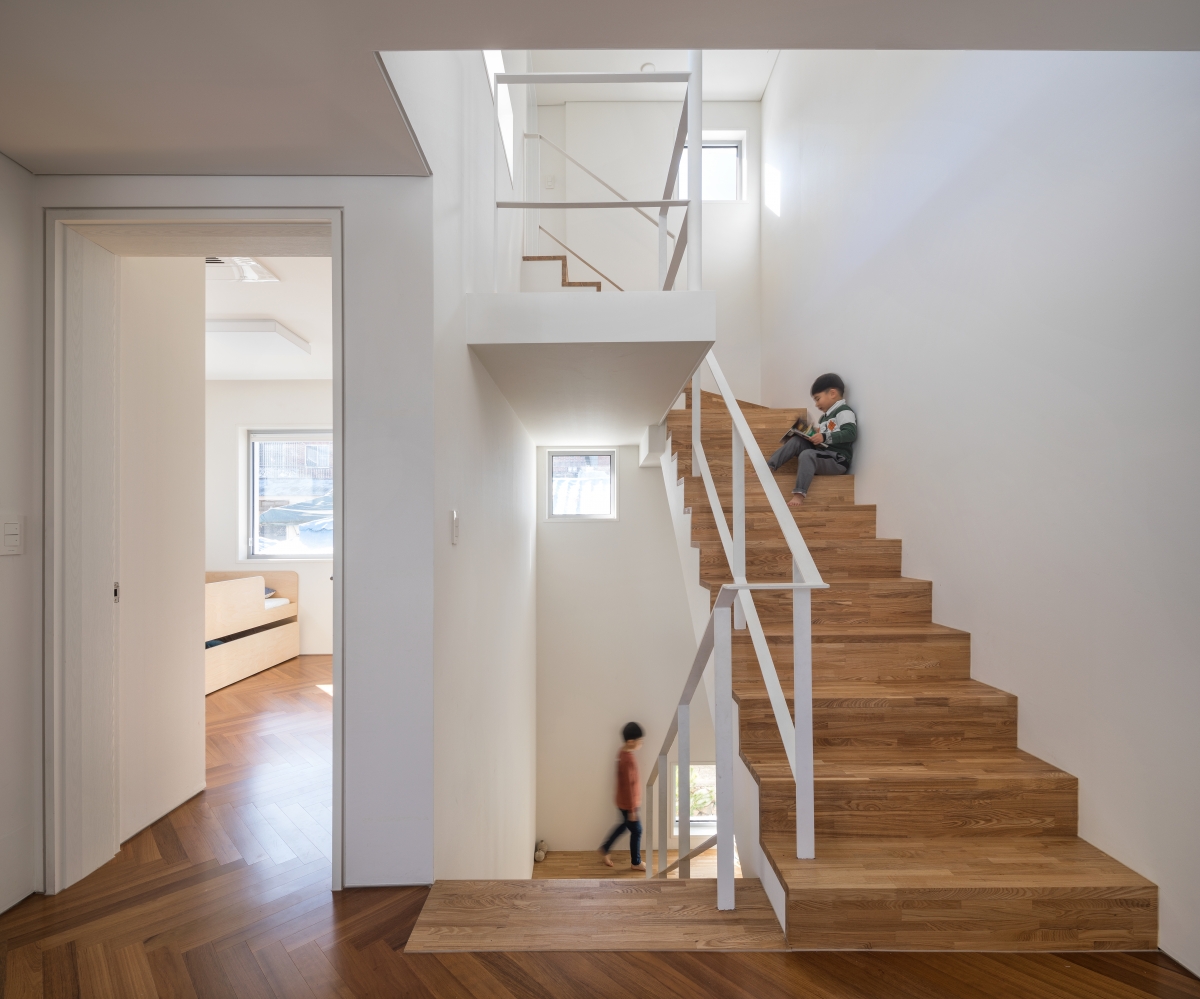 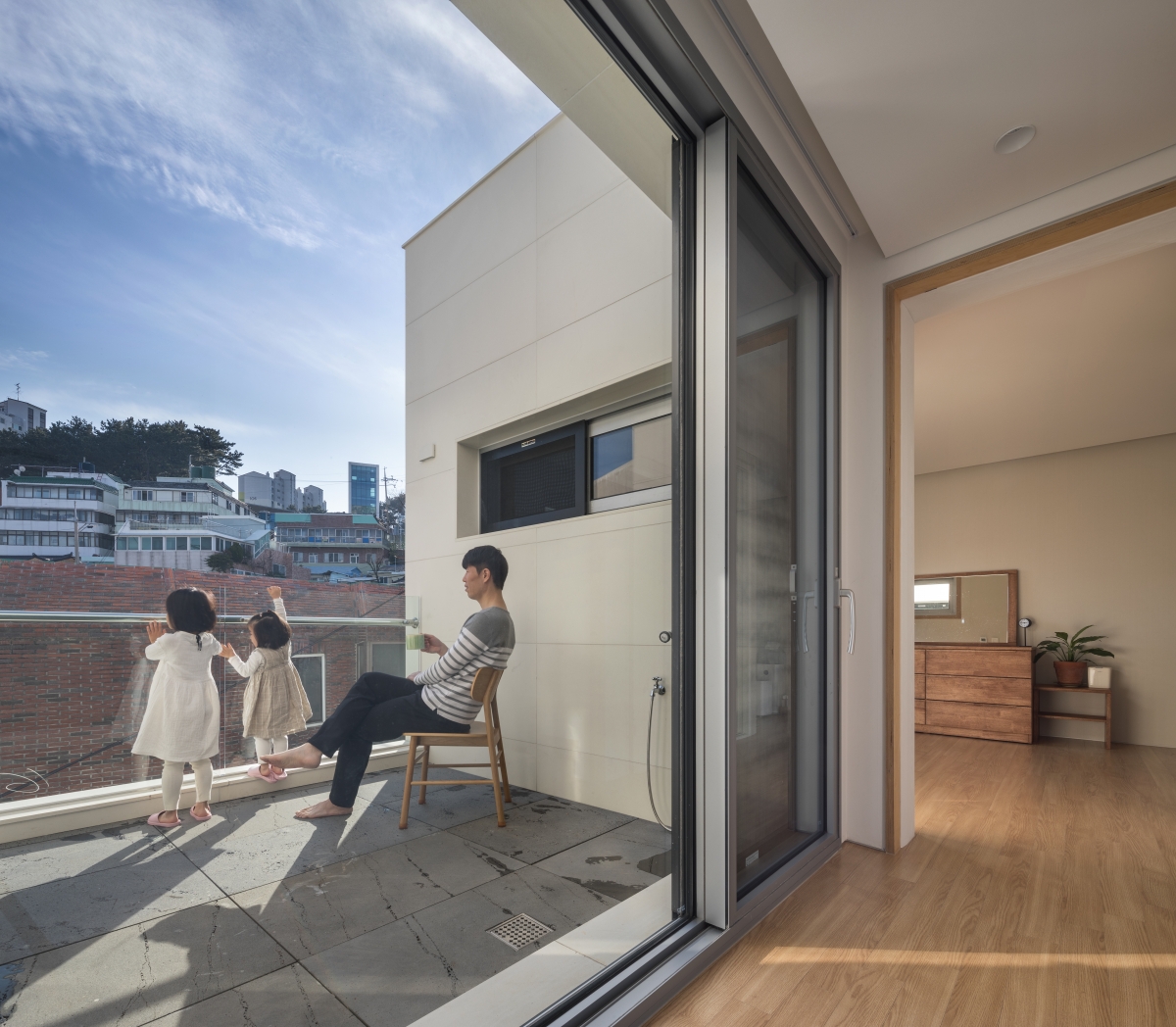 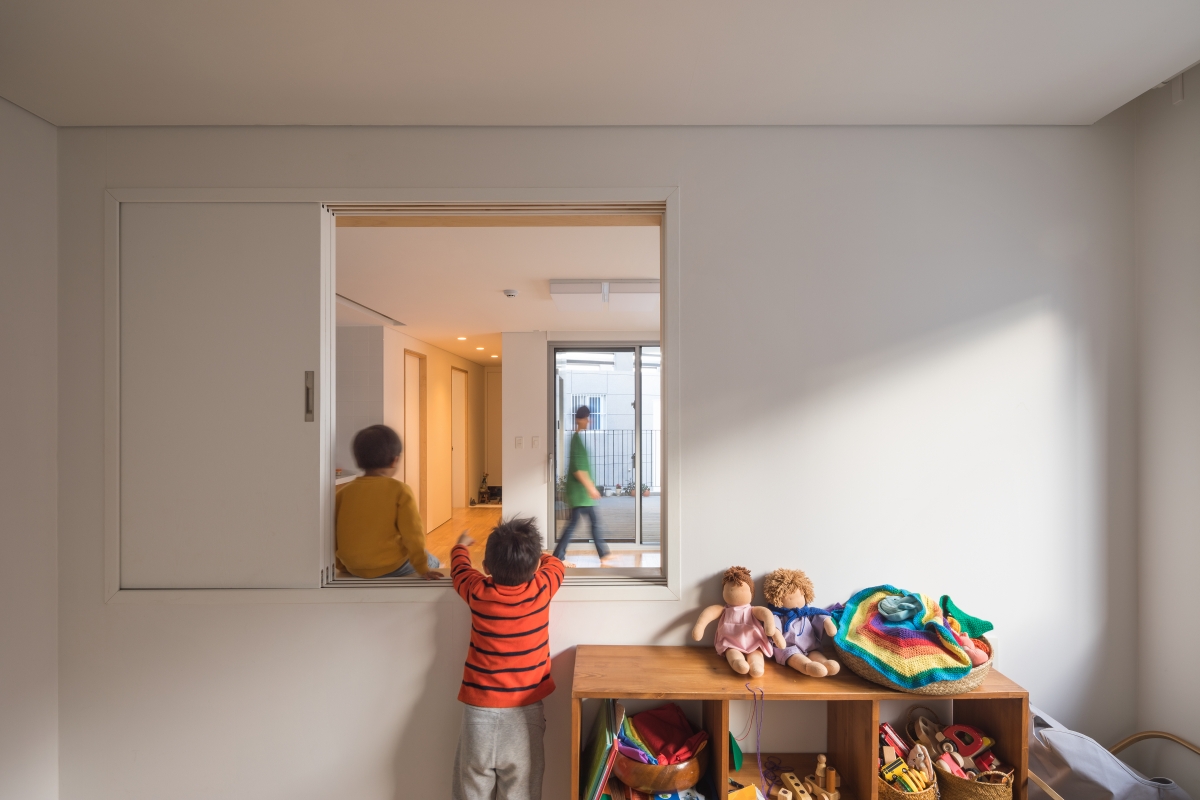 Oh Sinwook
Oh Sinwook, graduated from Dong-A University in the Department of Architecture and earned a doctorate in his thesis, Study on the Meaning and Effect of Schema in Architectural Design Process. He has been working on a variety of projects under the theme of ‘spacery and the future ahead, the new spectrum of white’, and experimented with the relationship between nature and the surrounding city through ‘Exploration of line’. Recently, through the work of MorningDew, Vicolo, Yellowknife and J-Sujeong, the government has expressed the importance of implementing the private regeneration practice of city. He is a chief of Architects Group RAUM and adjunct professor at Dong-A University. He is working as a public architect in Busan, and 2015 Rising Architecture Award and 2017 Korea Architecture and Culture Awards.
No.621 August 2019 MoYeoGa Oh Sinwook Architects Group RAUM Busan multifamily housing unit exclusive area pubilc space boundary Lim Sunghun
LIST
bookmark_border
favorite_border
113 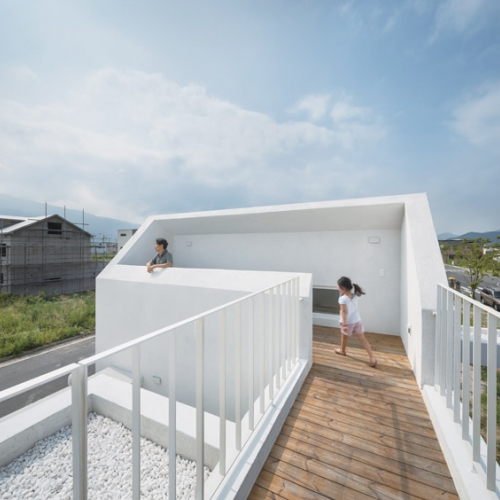