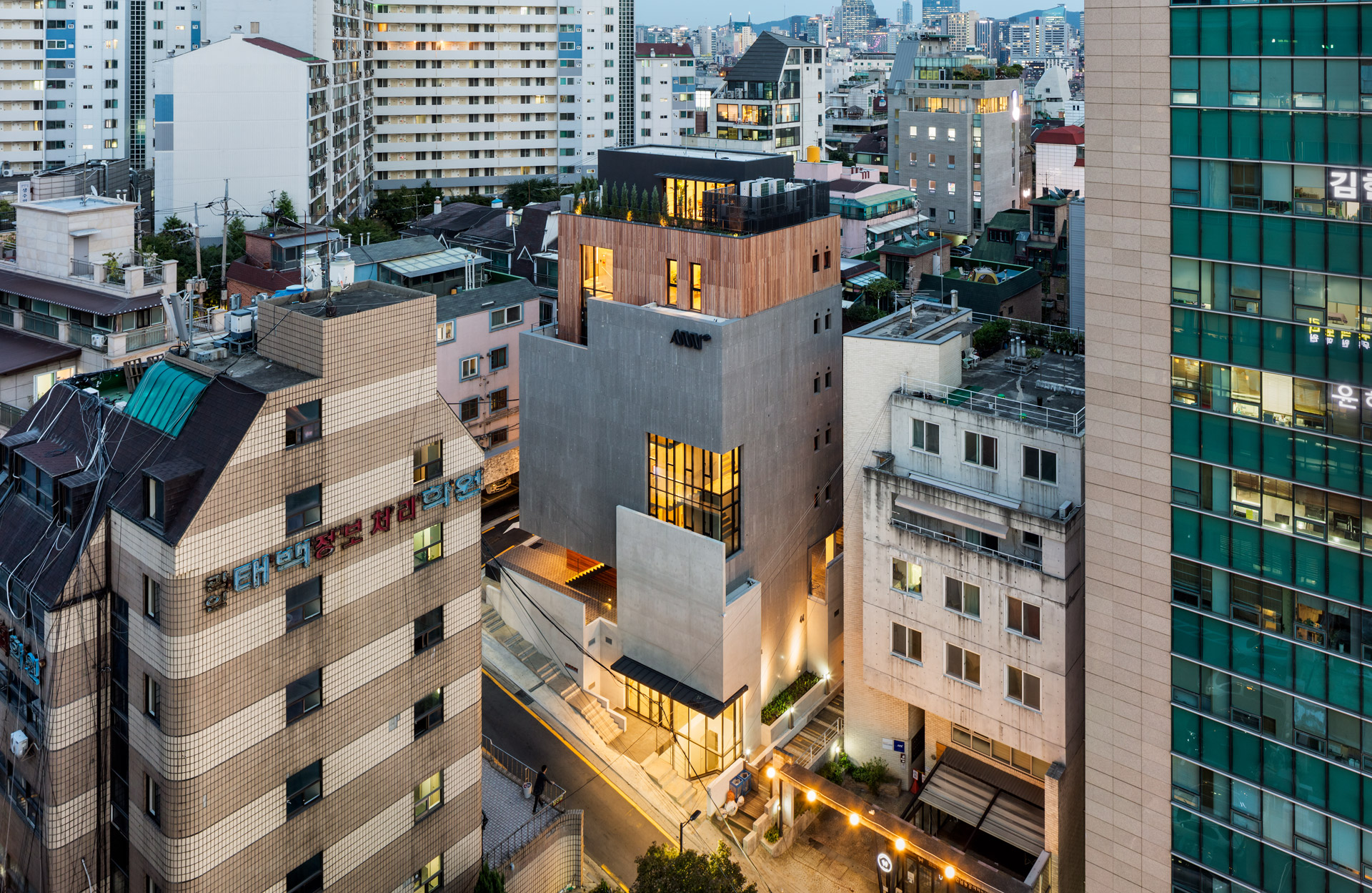 The Living Facility in an Alleyway Neighbourhood
Artificial Land
The first thing that that caught my eye on the site was the people cautiously making their way down the steep, sloping street. As the inner streets were designed as straight grids without consideration of the terrain, cars and pedestrians all have to endure these challenging slopes. The plan has been to resolve this problem before erecting the building.
To develop the site, retaining walls needed to be emplaced. Numerous planes were used instead of closed chunks. The intention was to integrate the walls with the building, thereby dissolving boundaries. Gaps were made in between the emplaced planes to open up the building to the city, and a pedestrian stairway was constructed on the adjacent sloping street.
Thick Ground
The programme for small-scale rental buildings generally known as neighborhood facilities is extremely simple. Moreover, because the user is not defined, the spatial requirement is not specific. As reaping maximum rental profit is favoured on this expensive plot of land, what approach should an architect take here?
Maximizing the contact area with the city was thought to be the solution. Given the 7 metre elevation difference to the adjacent road, it became a stepping stone to thicken the foundation of the area where the building and the city meet. The parking lot entrance was placed on the gradual portion of the sloped street and the lower part was connected to the basement floor of the building. People can access the building directly from the two basement floors and the two ground floors. By creating a thick ground, the vibrancy of the city streets and the free flow of pedestrians can permeate the building at various levels.
Deep Skin
Because the building’s height is relatively high, considering the width of the road, its density had to be balanced. However, it was unreasonable to create a robust outer space within the allowed building coverage ratio of the confined site. Instead, efforts to avoid making the building seem like a single colossal mass were central to the overall enterprise. Each of the various materials including stone, wood, concrete, and metal, were subdivided into modules. Glass windows were indented as much as possible to create contrast with the thick stone exterior wall. These independent planes with different size and texture divide and overlap as the user moves, adding depth to the skin of the building.
Delayed Movement
Pathways were intentionally created in the gaps between the planes. The straight stairway that starts on the basement floor spirals up at the ground floor and is ironed out again at the upper floors, which is used as an office space. This design was meant to respond to the legal limits and to change the tempo of experience by altering the direction of movement.
A glimpse of the distant city scenery viewed from the entry terrace on the first floor and the stairway becomes complete at the upper terrace and roof-top garden. The space between planes delays movement and offers an outdoor experience while also providing a view towards the city. We look forward to seeing this building of multiple levels, which views the city from a highly dense street, take possession of its value. 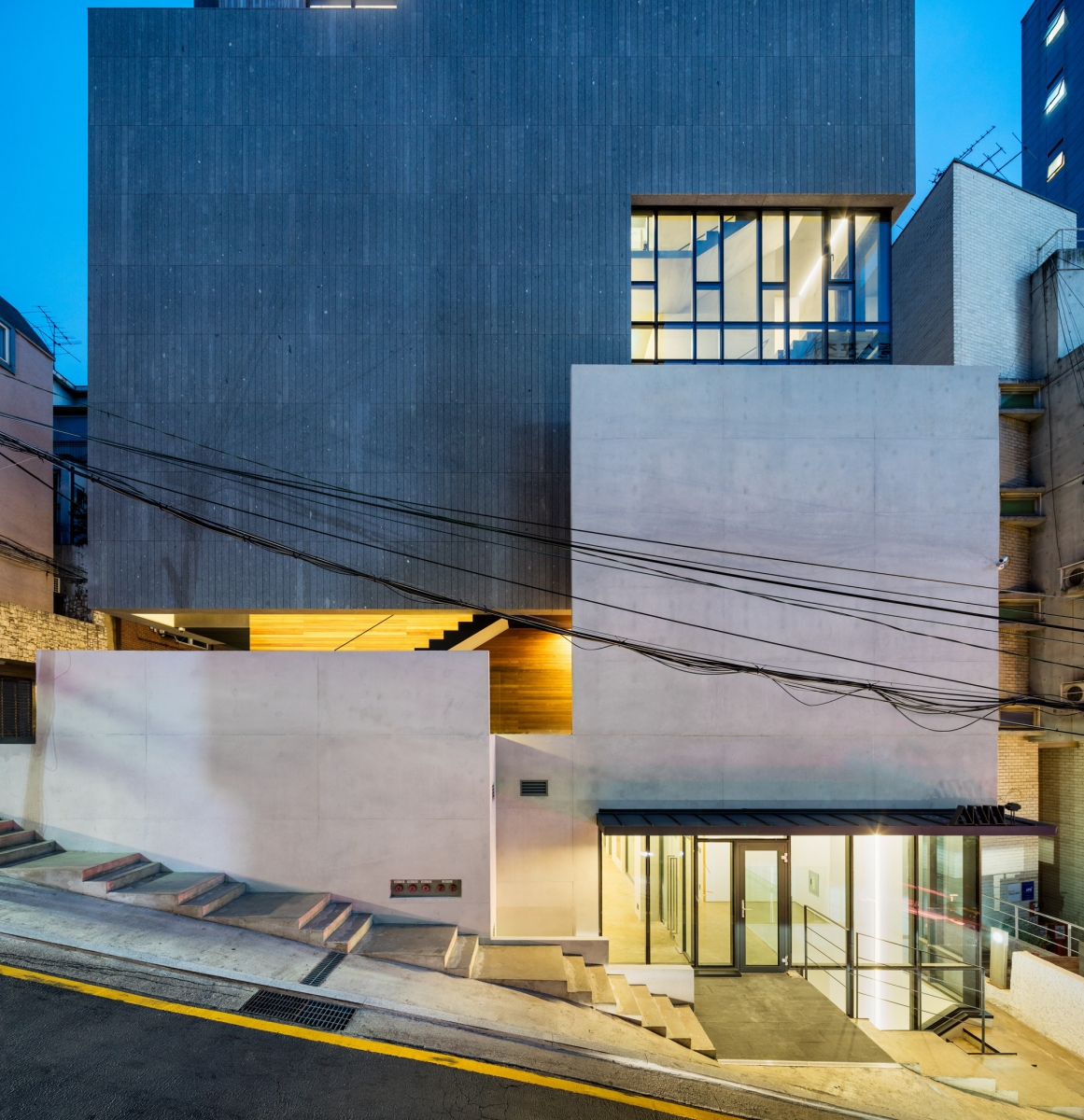 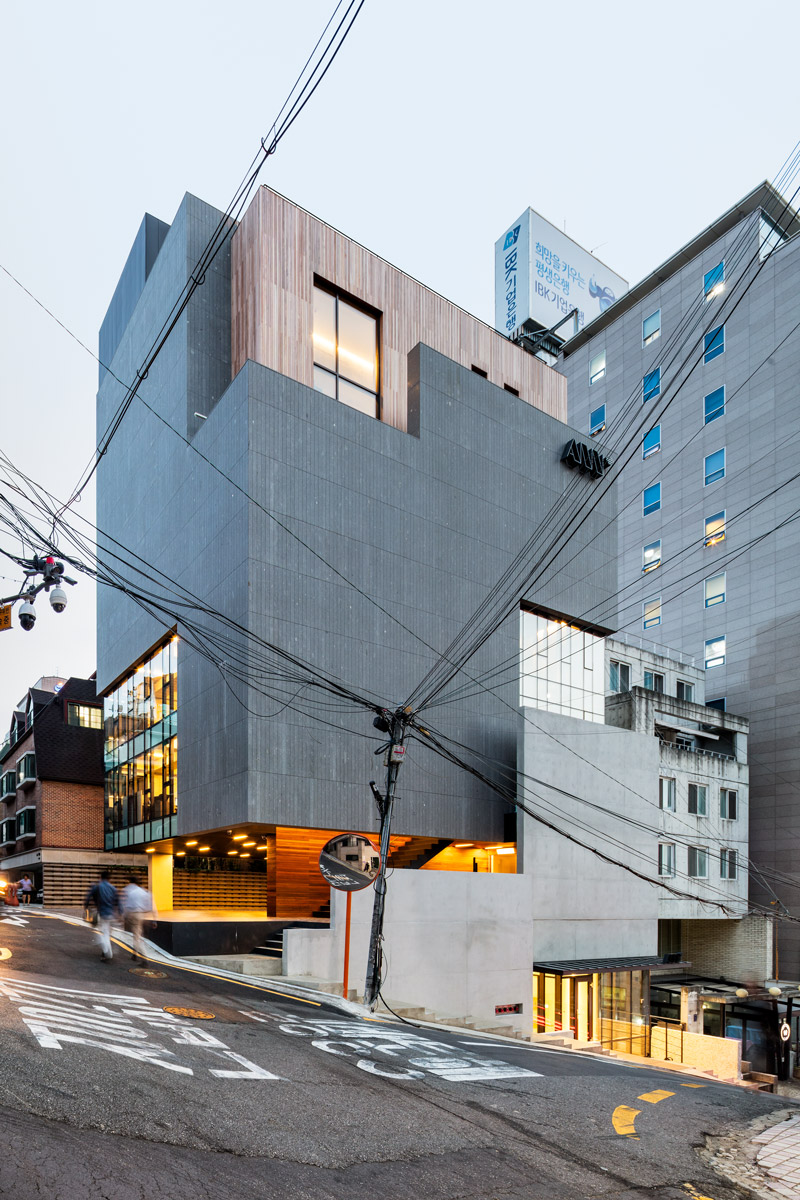 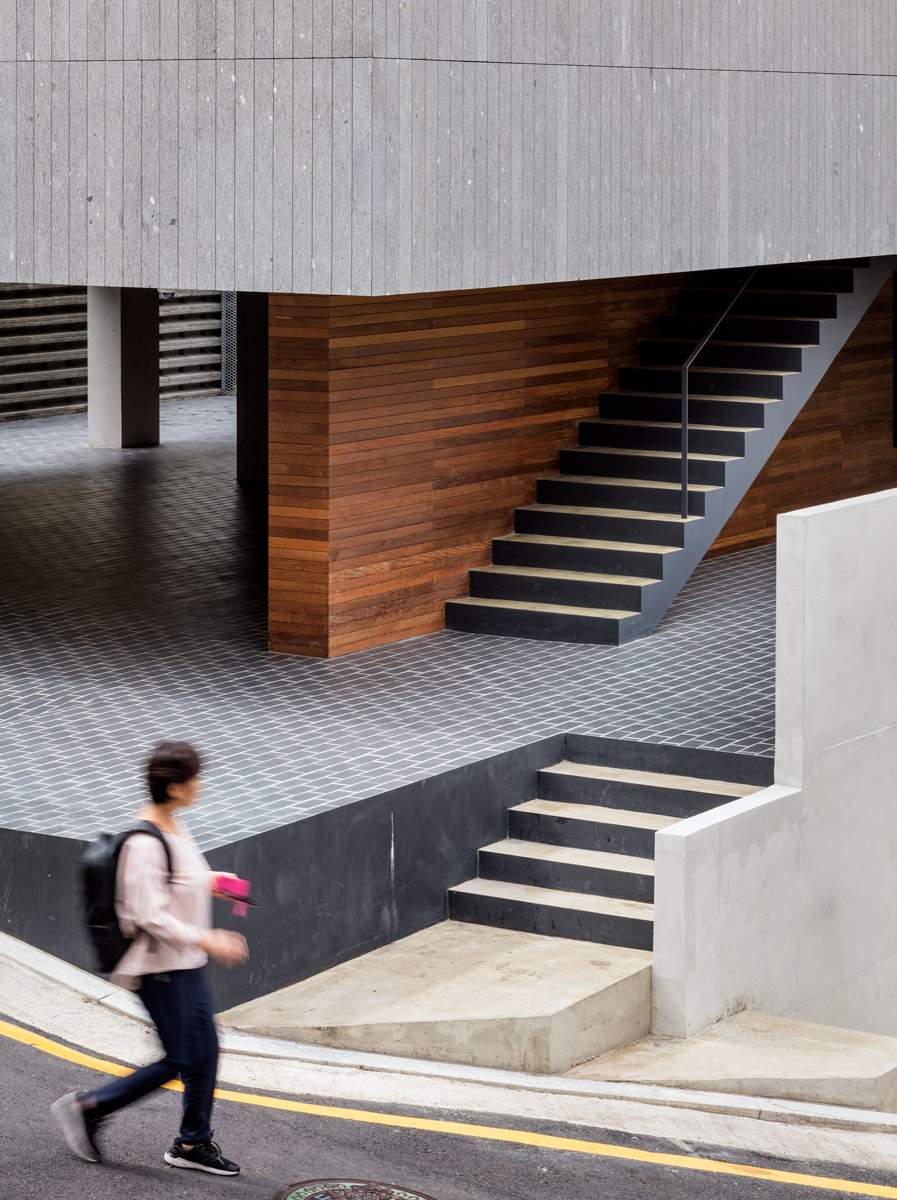 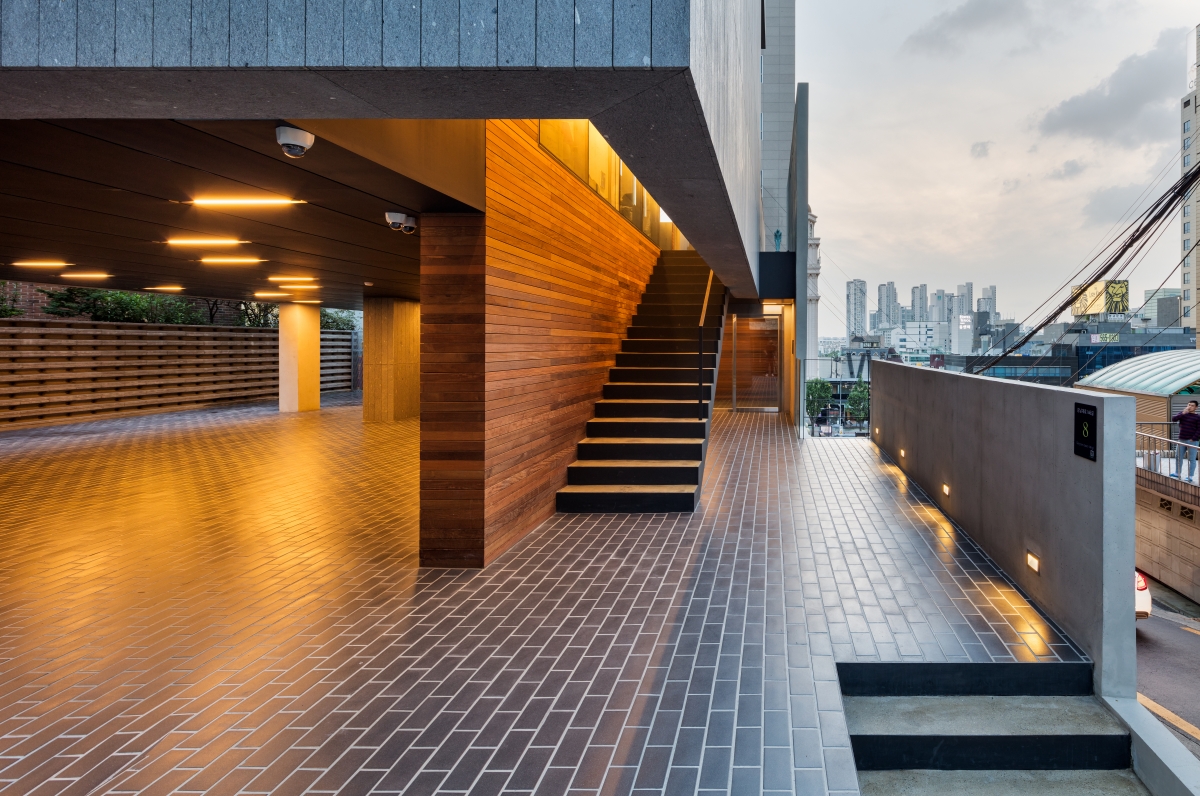 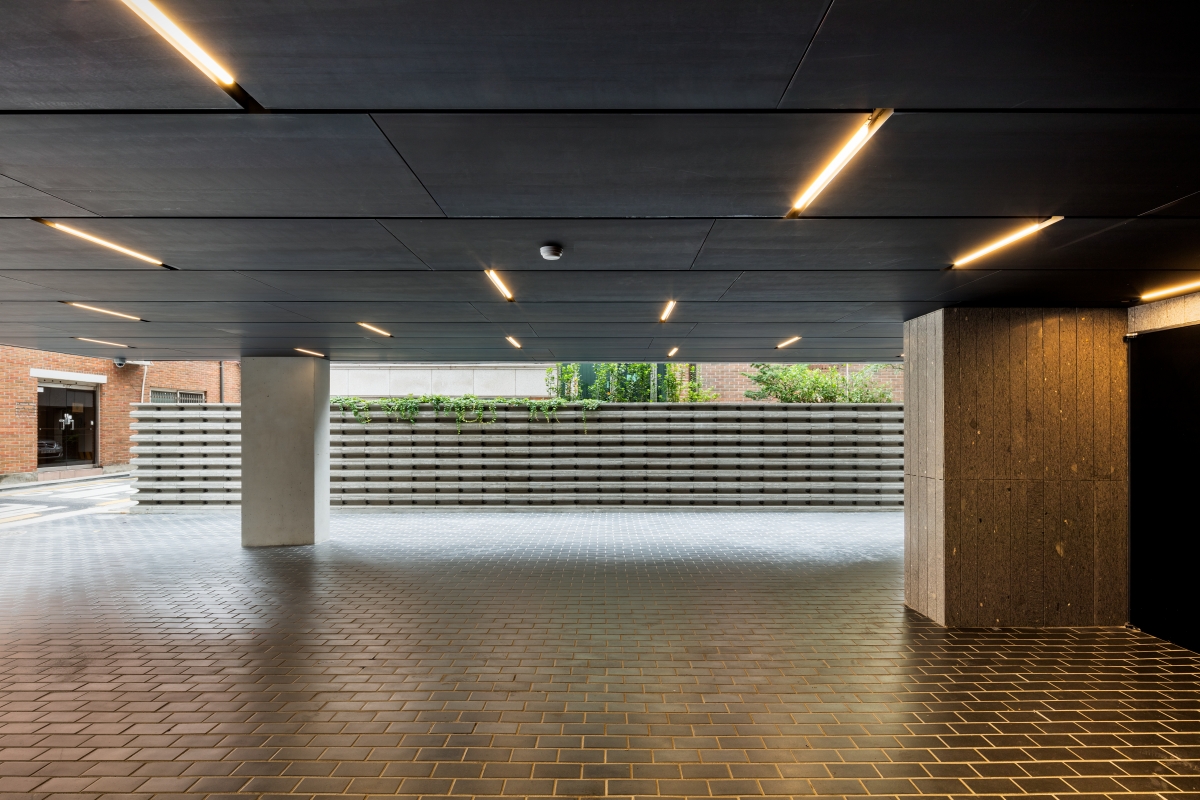 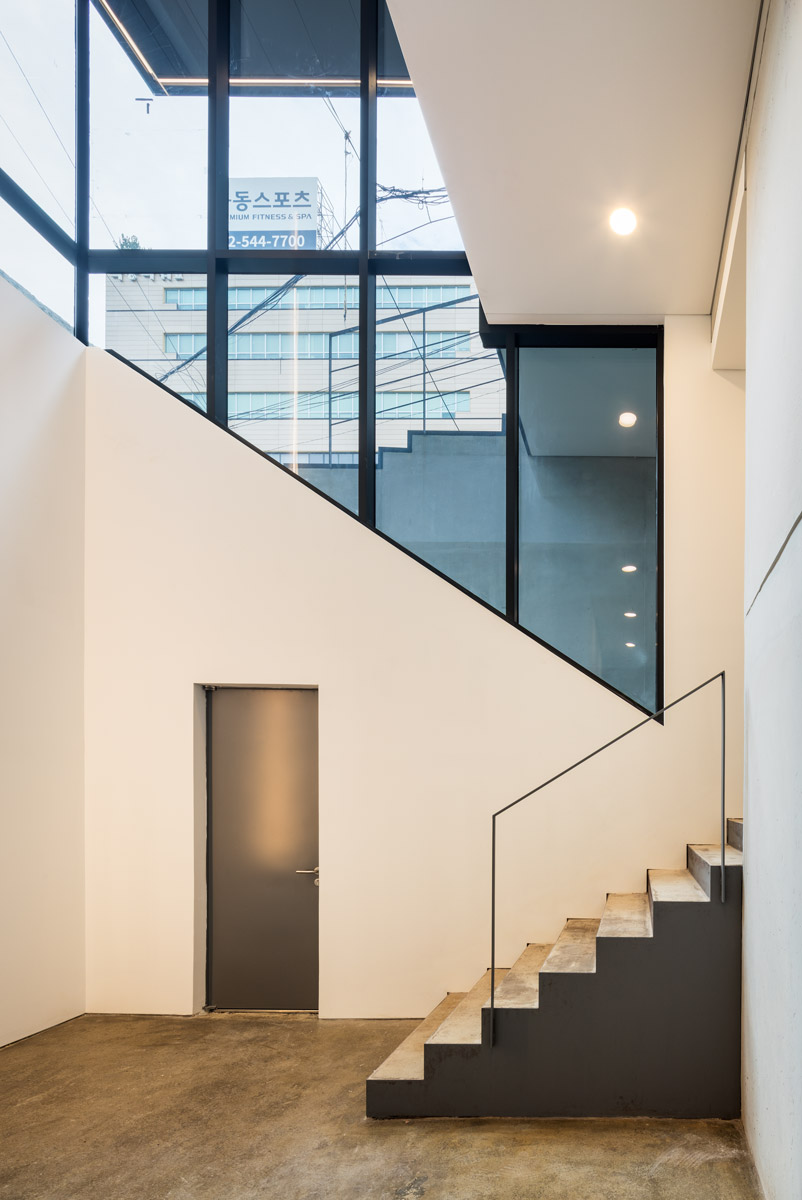 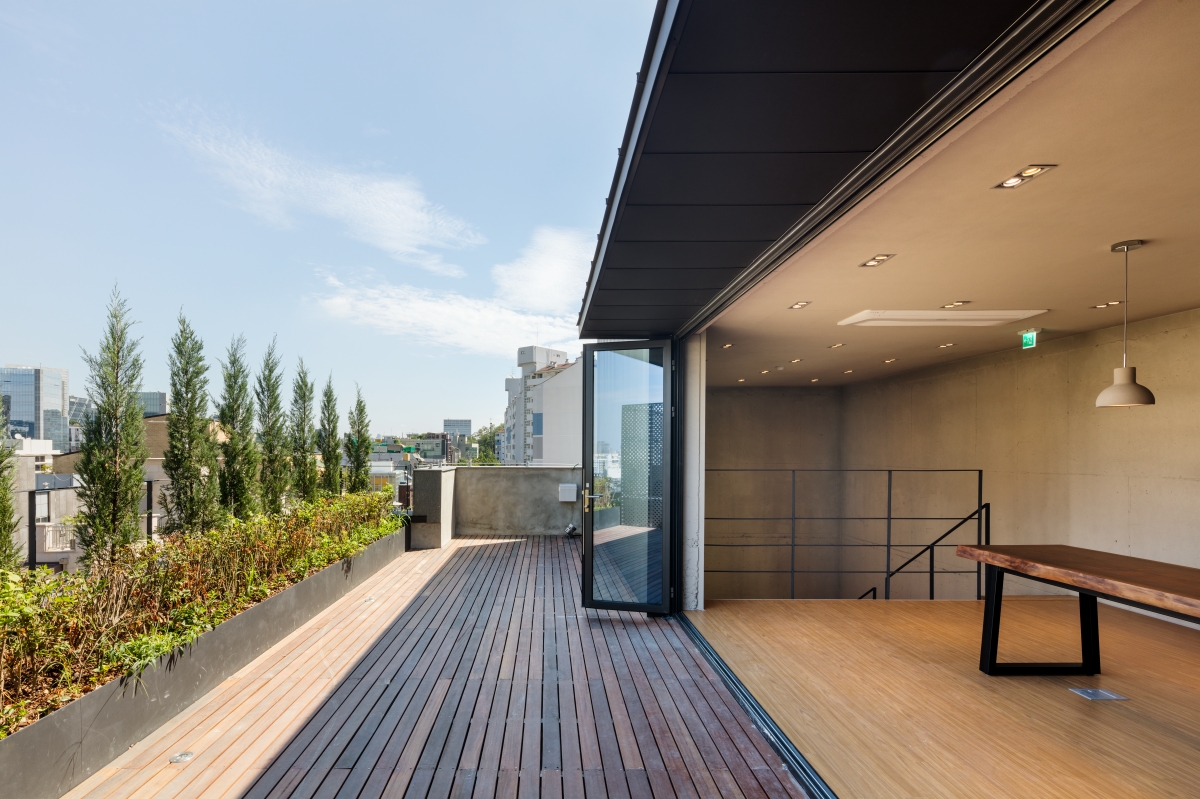 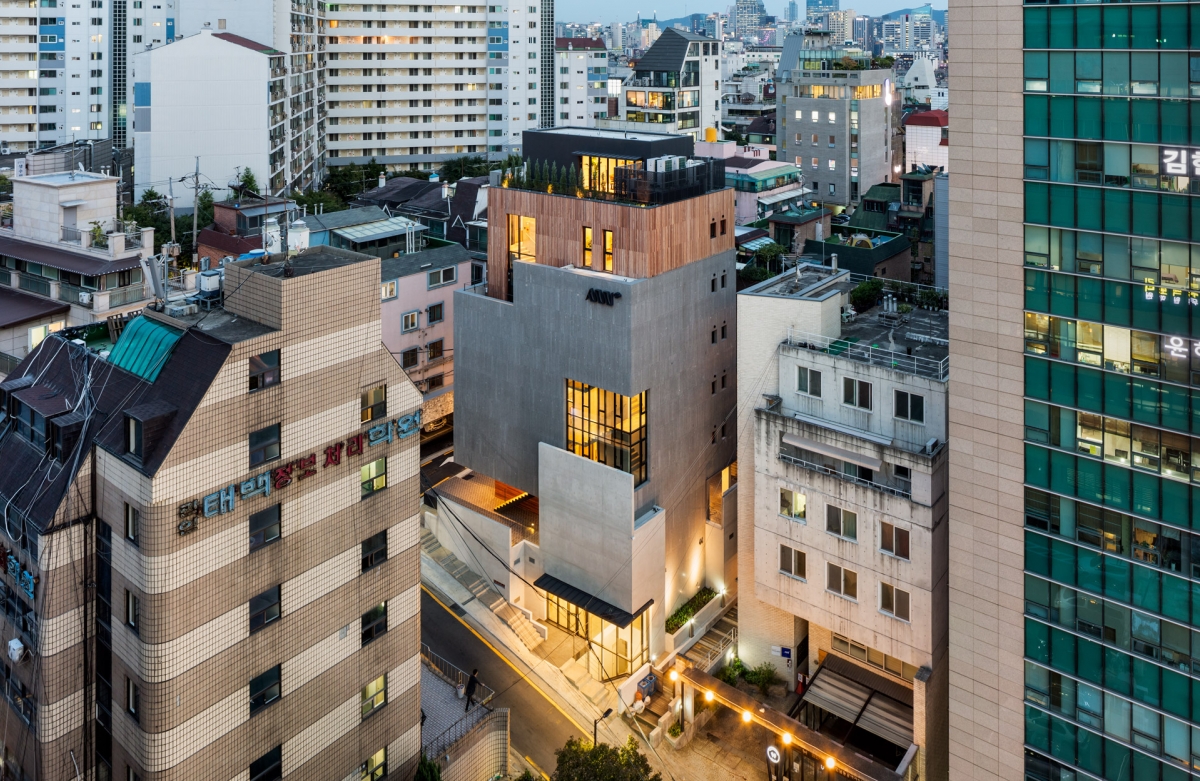