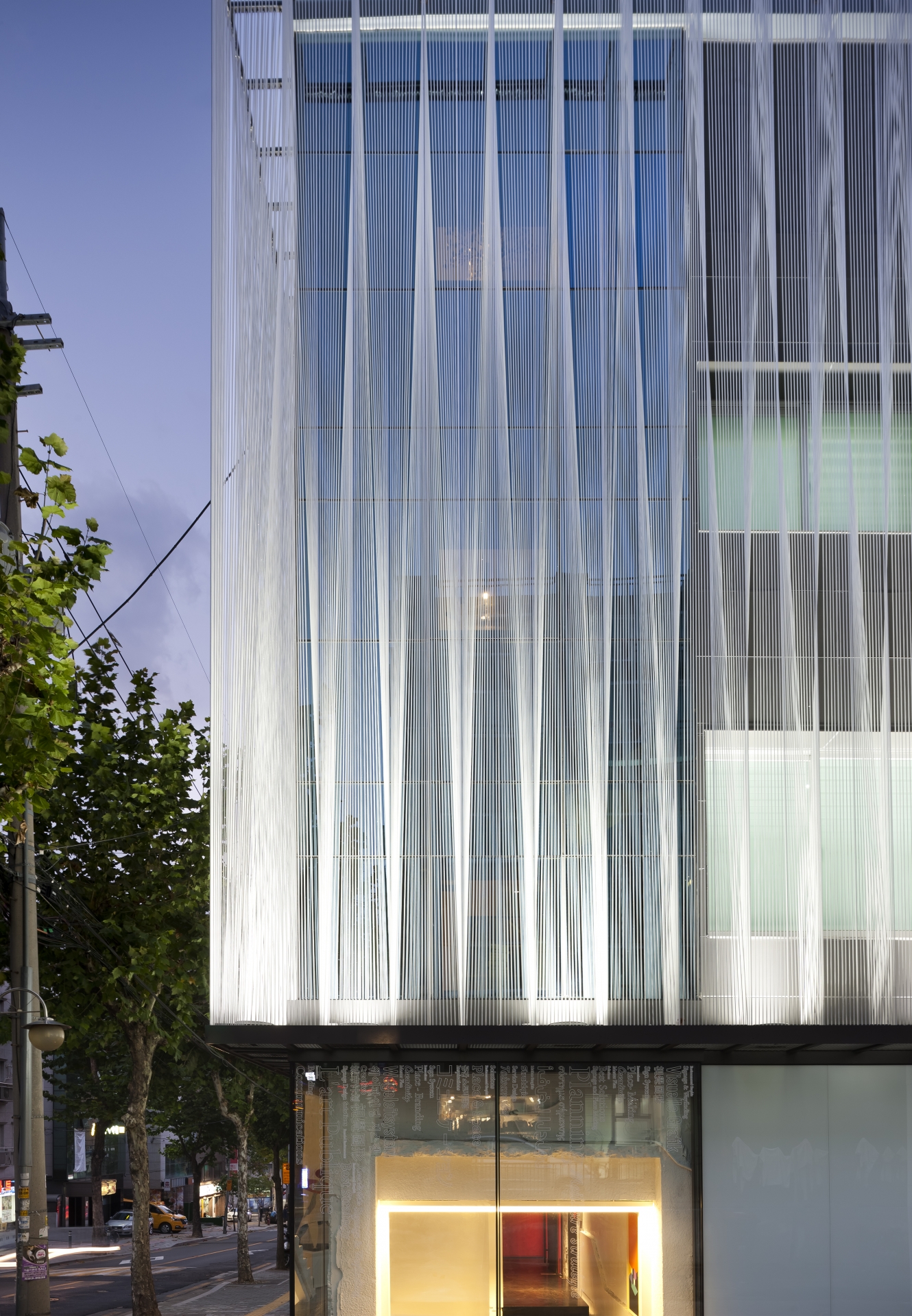 YiEUM Partners, an environmental design company, purchased a four-storey building originally built in 1979 as a bathhouse to become its new office space. The building is located at the end of the opposite side of Bangbaejungang-ro, which used to be famous for Bangbae café street, and it borders a two-way two-lane road.
On our first visit to the site upon receiving the renovation order, the building looked like a typical building, erected with low-quality glass curtain wall, but it was a fake decorative curtain wall that was used to hide the external tiled wall of the past bathhouse. The external layer was added simply to hide the traces of alterations made to bathhouse over its lifetime and multiple owners.

The building’s owner wanted to flaunt the building’s identity as a design company to the wider streetscape, and to redesign the dark and humid basement space, which was mainly used as a storeroom, and the generic lobby floor, which was a shared space for visitors and staff. The image demanded by the building owner was explored through an approach that resembles installation art. The building’s owner was also a professional in spatial branding, and as such the project offered intriguing possibilities for cooperation. As the renovated building was to be used until its plans for future reconstruction, we came up with a lighter façade function that would resemble a stage curtain drawn before a play or a panel on a construction yard, evoking a sense of curiosity. As the project progressed, the external layer design evolved into a layer (stack) that acts as a catalyst, making the building’s interior space and the street outdoors interact in an empathetic manner. Another point of note was how a company, as a private realm, can create space in the public realm. Regarding this, the memories and traces left by this building as a bathhouse provided a clue to the answer. A bathhouse is a very intriguing place, where a public facility used by the masses fuses with the idea of a highly private, intimate space. It is a strange public space, where people, outside of their homes, come together to remove their clothes and engage in private conversations with one another while relaxing in a hot tub. We wanted to reinterpret the memory of the bathhouse as a kind of a sign and tried to engage with the realms of the public and private. 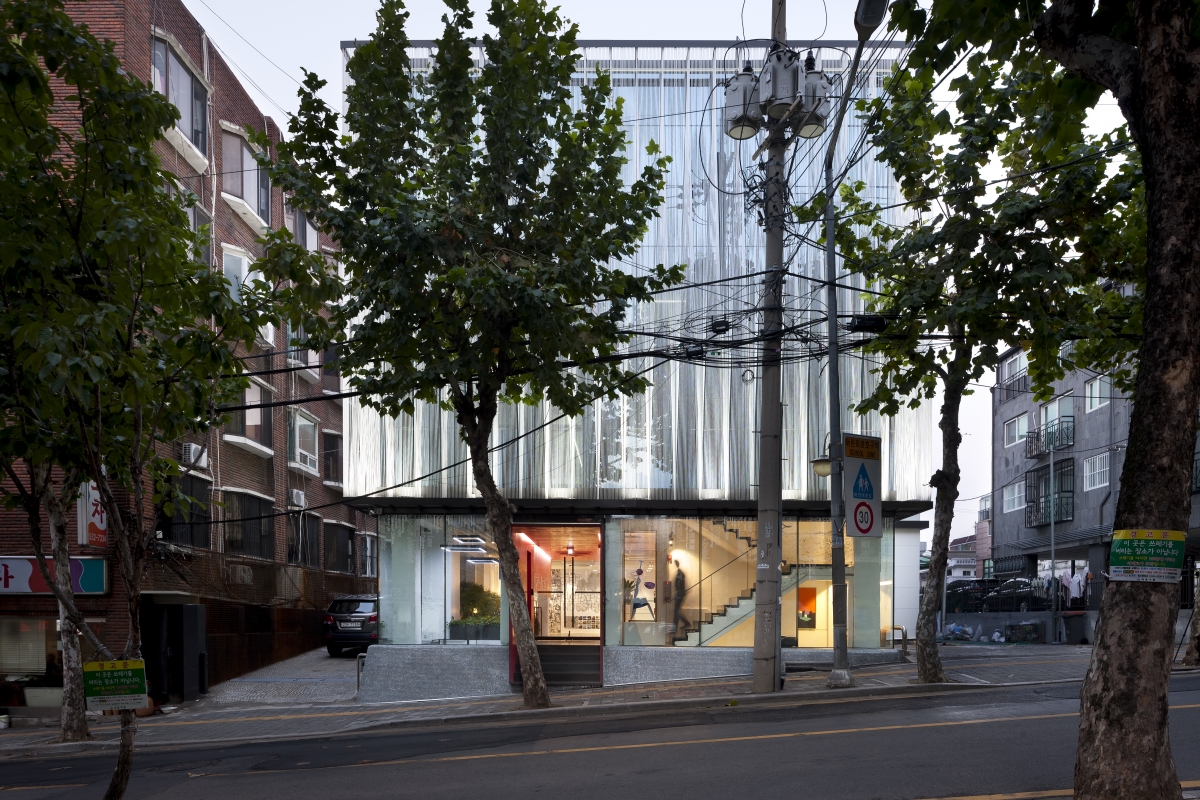 We decided to keep the original glass curtain wall due to an issue regarding removal costs. Because of this, the aim to attach an additional structural body for external use became an issue. We had to consider numerous alternatives to realise the idea of a curtain or a blind, and eventually we came up with the idea of an outer skin made of parachute ropes to minimise the wind load. It was an adventure to apply a rope 8mm thick in diameter to the building’s exterior. By using computer simulations, we first designed how the ropes would be connected on the upper parapet to the canopy. We wanted them to look like they were moving independently when seen from the streets, and also wanted to make sure that the ropes would not move with the wind by manipulating their tensile force. The white ropes that cover the external layer, with a total length of 15.7km, preserve the effect of the original curtain. The building has a bold sense of identity, one that shifts according to the time of day and the low-lying night lights when viewed from street-level.
Layer – Space
At the time of purchase, the building was a common neighbourhood facility with its street entrance adjacent to the main space on the first floor. We were essentially perfoming a renovation project, but we also wanted to expand our practice and look beyond the building itself. We contemplated the spatial sequence, which was horizontally overlapped by the deep alleyways running alongside the opposite building, the building’s exterior, the staircase hall, and the main space. In order to expand the spatial experience of the visitor as he/she enters the lobby, which functions as the reception as well as an exhibition space for the company, we designed a void between the staircase hall of the lobby and the main space by removing a part of the slab. The space expanded and is now vertically connected by the lobby and the basement floor, acting as a shared space for the staff and visitors. Ultimately, the outer layer of the rope screen, glass curtain wall, tile wall, staircase hall, void, and exhibition space were divided and a compressed stack was created. A guadrangle tubing penetrates the layers and it makes visitor’s spatial experience various. The quadrangle tubing protrudes a little from the building, veiled by the curtain, to become an entrance for curious minds.
Bathhouse

As a result of the many changes weathered by the building, all that was left of the previous bathhouse was the trace of its original plumbing. However, the neighbourhood residents who had lived here for a long time still have a clear memory of the bathhouse. Memory of the bathhouse was physically revived under the sign of a mosaic tile, and the tile was applied to the building stylobate and the entire wall of the newly constructed external sunken space. The mosaic stylobate, that is formed at an angle within and outside the entire building, acts as a public table and a bench for the staff and passers-by, and provides a vibrant atmosphere on the street. For example, according to the passers-by, the external sunken space, which was built as a separate entrance to the basement floor by request of the building’s owner, resembles a cistern. It became a dry bath that embraces light.​​ 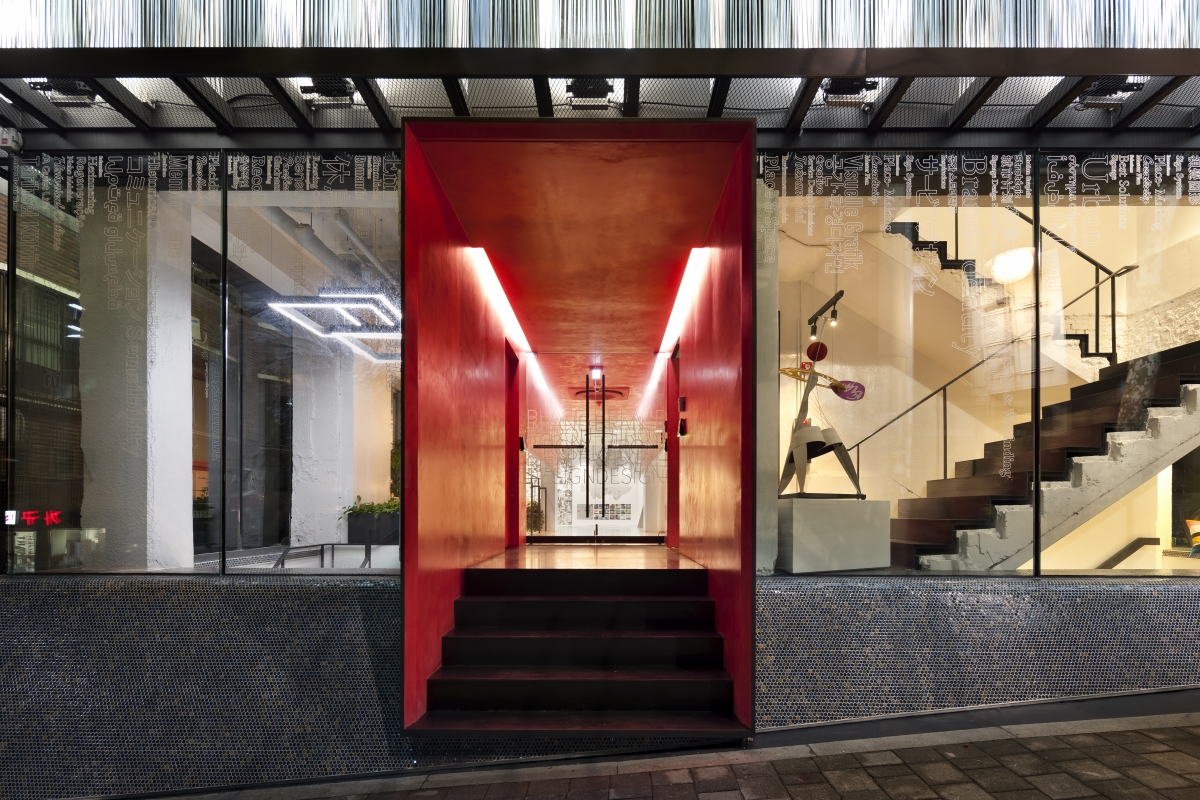 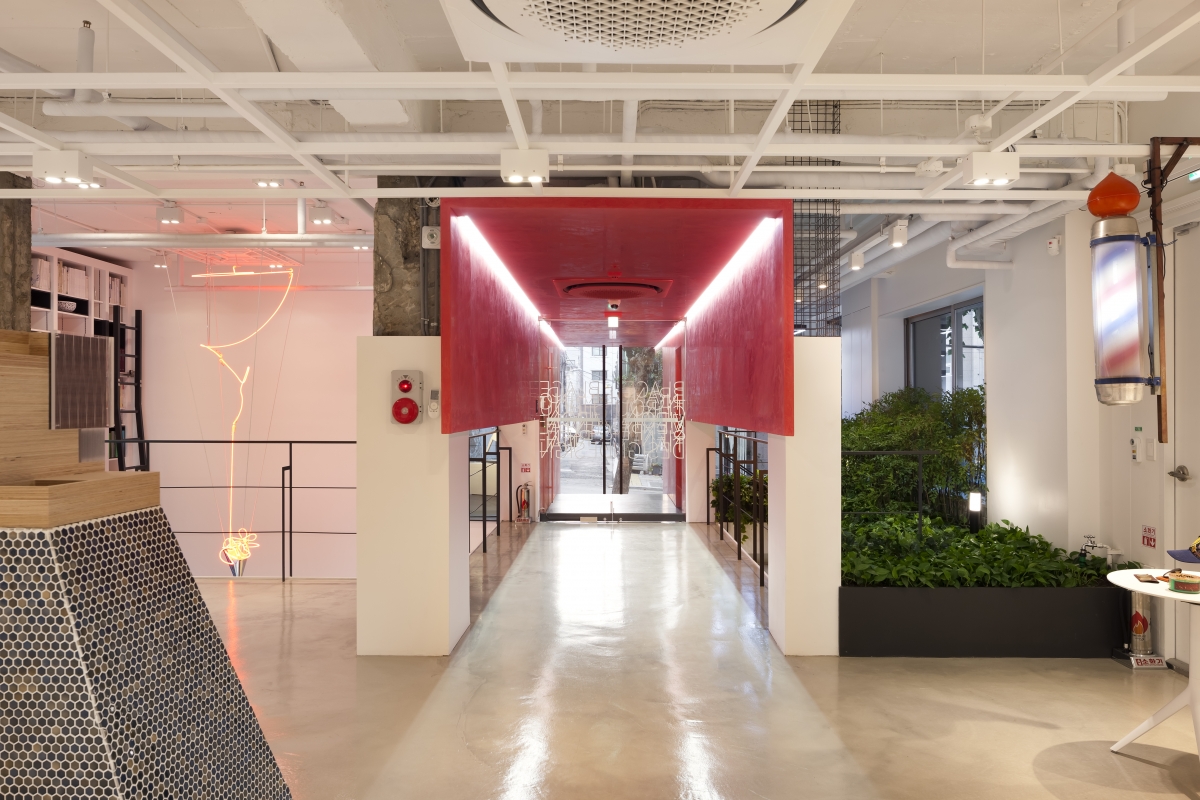 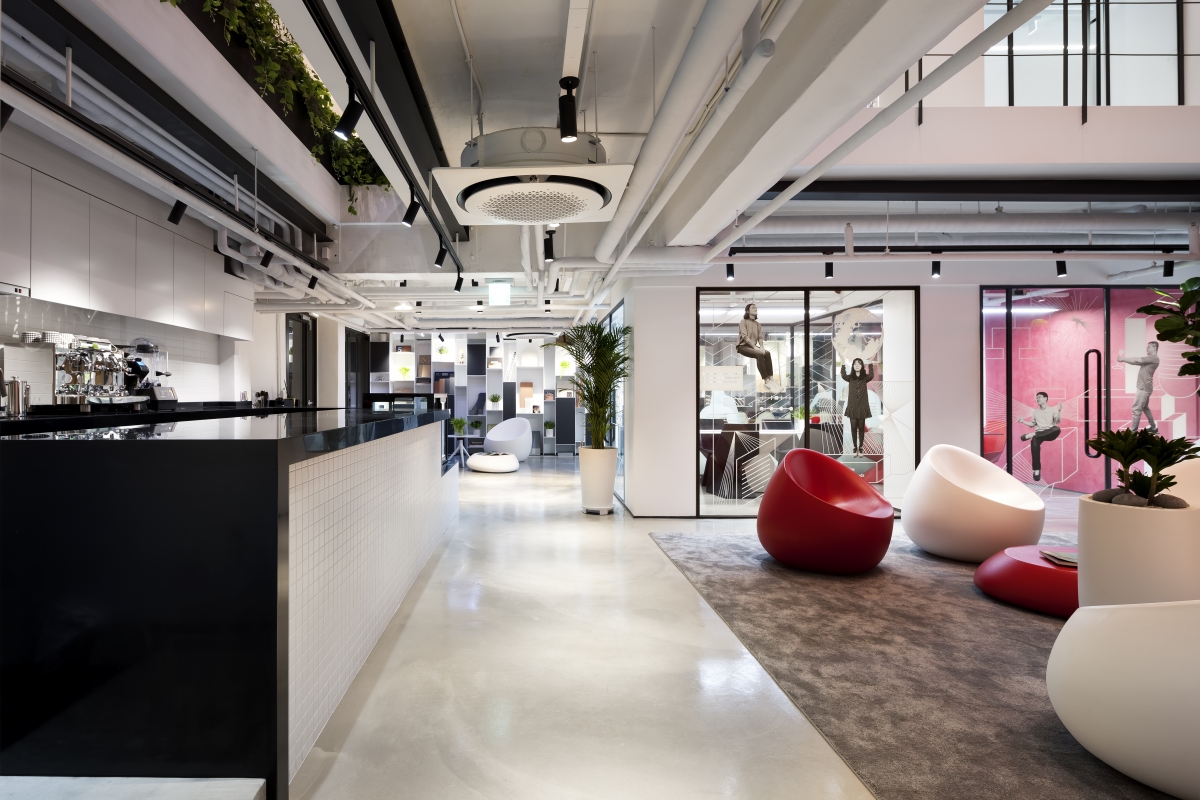 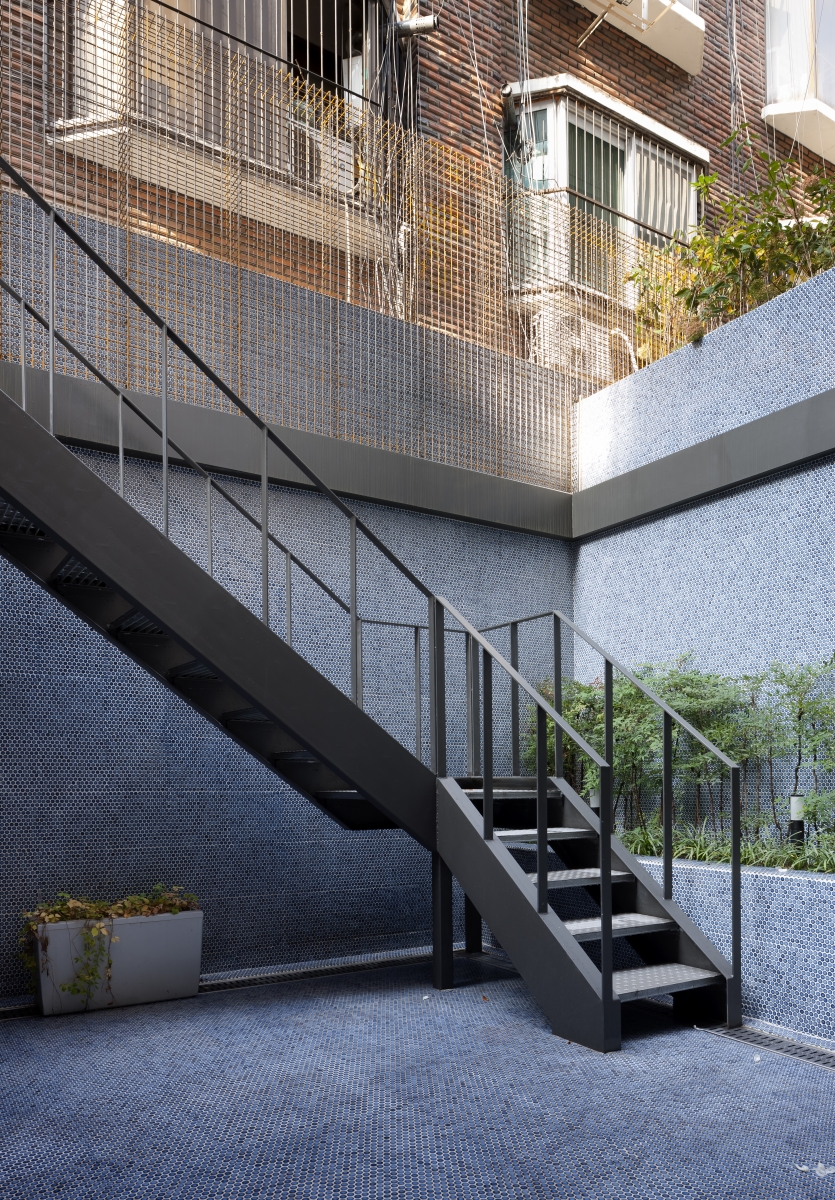 Hur Sun
Hur Sun is the founding partner and a chartered British architect. He started training at Tai Soo Kim Partners in 1995. He later studied at the AA School in London before joining Ian Ritchie Architects. He carried out numerous projects in U.K and Europe; which were exhibited at the British pavilion in the 2004 Venice Architecture Biennale. After returning to Korea in 2007, he joined SAMOO Architects & Engineers for global projects and finally established urban ark architects in 2017.

Yim Sungwoo
Yim Sungwoo is the founding partner of urban ark architects and a registered Korean architect. He was awarded M.Arch from the Graduate School of Konkuk University. After graduation, he joined HAEAHN Architecture and had accumulated working experience in cultural, business and commercial facilities. Since the establishment of urban ark architects he has been working on a variety of spectrums, from architectural design to urbanism such as YiEUM office, mixed use commercial facility in Tehran, Iran etc., starting with the competition winning project, Daegu Gomo station Regeneration.
Kim Hyunsoo
Kim Hyunsoo started his professional career at Design camp moonpark dmp and had accumulated professional capability in cultural & business facilities. He established urban ark architects with Yim Sungwoo, a graduate school classmate. He won the competition for the Korean Empire historical cultural trail, which is part of the regeneration project in Jeong-dong, Seoul, and has worked on a number of projects including Taejuheon (Korean traditional house-Hanok), Townhouse in Jeju. He is interested in various fields including object design.
No.615 February 2019 architecture YiEUM renovation bathhouse layer parachute ropes urban ark architects
LIST
bookmark_border
favorite_border
183