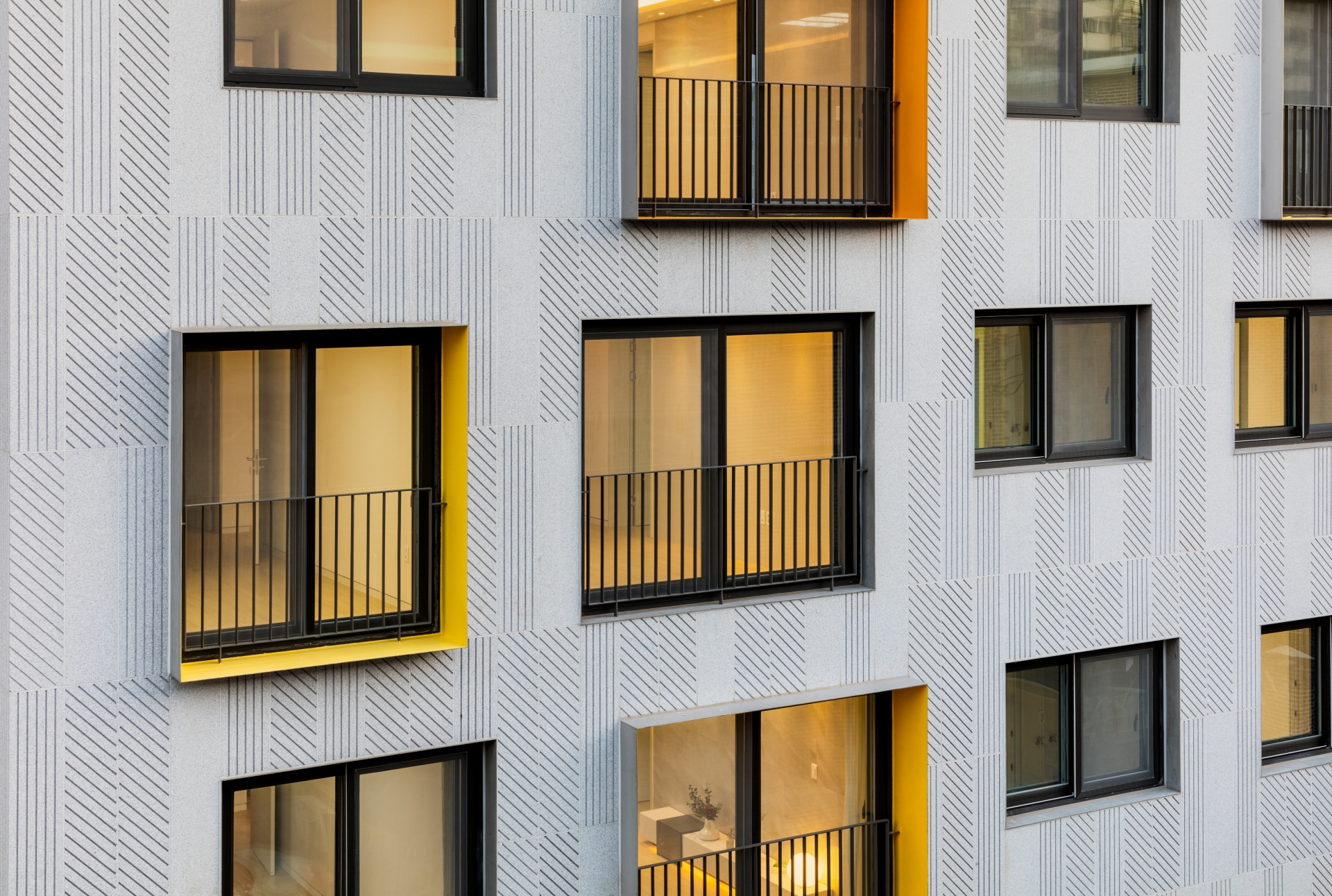 An Apartment Alon: A Conversation with a Road​

Yellow Foot is a solo small apartment complex in Seocho-dong. The project is located in the area of multi-generational and neighbourhood living facilities between the Bang-Bang intersection in Seocho-gu and the Gyeongbu Expressway. Once entering in the area, one is met by a scene that epitomises the typical back road, composed of multi-generational and neighborhood living facilities, which have been formed according to the irrational plans and licensing practices of architects in an effort to correspond with the profits of developers. This is how the rapid urbanization process of Seoul unfolds. 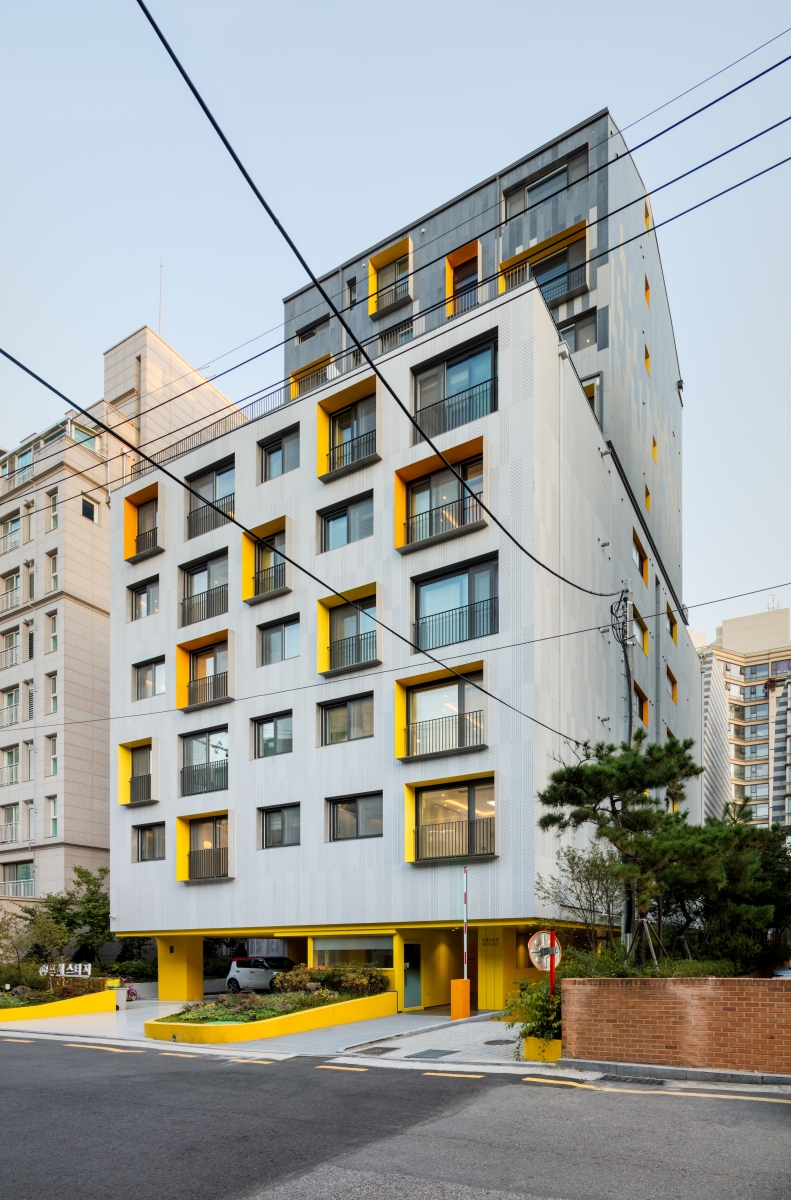 The Universality of a Neighbourhood Landscape
There is occasional criticism that the landscape of the street as seen in Korea’s urban organisation is universal and monotonous, but every time I hear these words, I sometimes wonder in what aspect it seemed to be so. Paradoxically, it is difficult to find similarities between buildings, thanks to the fact that each building has its own plans in each lot so that it is difficult to read a common architectural vocabulary or design that covers an area.
Nevertheless, if the roads of these areas, in which the multi-family and neighbourhood living facilities of Seoul are clustered, present people with a universal and stereotypical impression, what is the cause of this? There is a common law in the area, the universality of the building mass, which is formed by searching for the maximum floor ratio area therein, and the uniformity due to the limited construction ability, to which the standardised material is added. The landscape of the streets has a universality determined by the invisible hand according to the combination of the construction industry, technology, economic value and utility surrounding it.
The Necessity of the Road and Communication
There is a consistent attitude in most of the buildings of areas that share these scenes. It is an indifference to the road, neighbourhood and the local landscape. Most of the buildings have their own attitudes to how the building will meet the road and treat the road as a public service because they only consider the value of the building as a private facility on each plot. This only contains anxiety about the building itself. As a result, individual buildings are separated from their neighbours and roads encircle them like isolated small islands.
It is not only found in the neighbourhoods of the town Yellow Foot, but also in other multi-generational and neighbourhood living quarters of Seoul. Considering that 40 – 50% of Seoul’s population still lives in these residential-type areas, it is essential to question whether these large-scale complex apartment buildings, but also those shaded areas, improve our quality of life. If we want to live in a good urban environment, are not only must the buildings be appropriate to their plots but also to the public spaces, urban landscapes and roads created by the buildings, all of which should be improved. To do this, communication between the road and the building is essential.
A Step Forward for Communication
Yellow Foot is a self-contained apartment block designed for sale by a developer. Therefore, there were practical limitations when applying the opinions of the public. It was a project that could exist only if the economic value was guaranteed through the number of households and the number of rooms considering the shape, size, and regulations of a given land, and maximizing the building-to-land ratio. There was a need to pave the way for clients to achieve their desired business goals, while at the same time offering better architectural alternatives to the surrounding neighbourhoods and to roads.
It tries to converse with the road through a bold attempt at elevation, mass, and ground on silenced and closed side streets. The elevation finds a range of possible variations even within the planar constraints, and has a three-dimensional elevation attentive to change and order, providing a landscape on the roadside. The mass of the proposed building has two chunks, which take into consideration the right to have sunlight and the internal regulations of the Seocho-gu Office. Heavy low-floor masses of 2 – 6 layers cover upper masses of 7–10 layers and correspond to the human scale of the earth as if it is a six-story building. The ground surface of the pilotti structure of the parking lot maximises the legal landscape area so that the landscape surrounds the parking lot and extends as if it is clasping to the road. There is a plan for the building to directly mediate between the private and the public area as a transitional space.
Through this a series of architectural approaches, Yellow Foot forms a boundary open to the neighbourhood, unlike the surrounding buildings, and at the same time attempts to penetrate the roadside through nature. It is a privately owned facility, but with an open attitude to the public sphere, it takes a small step to revitalise the desolate landscape of the area.​ 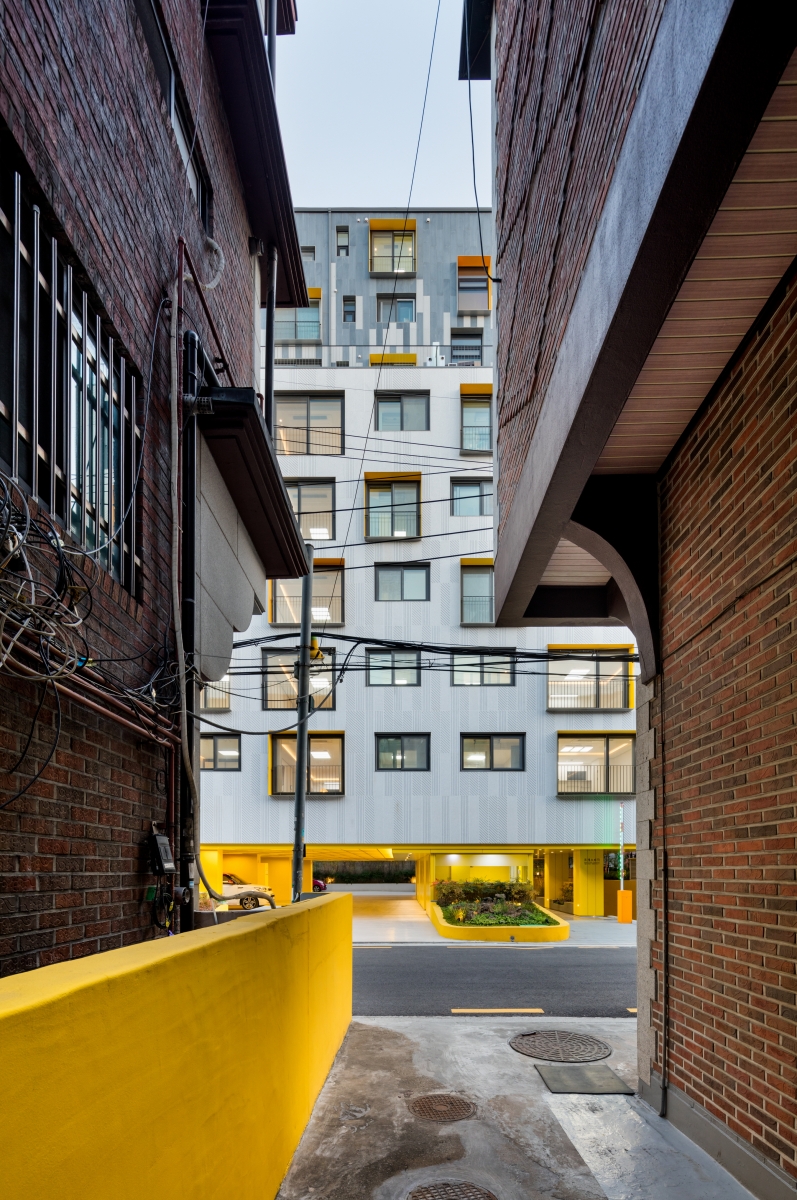 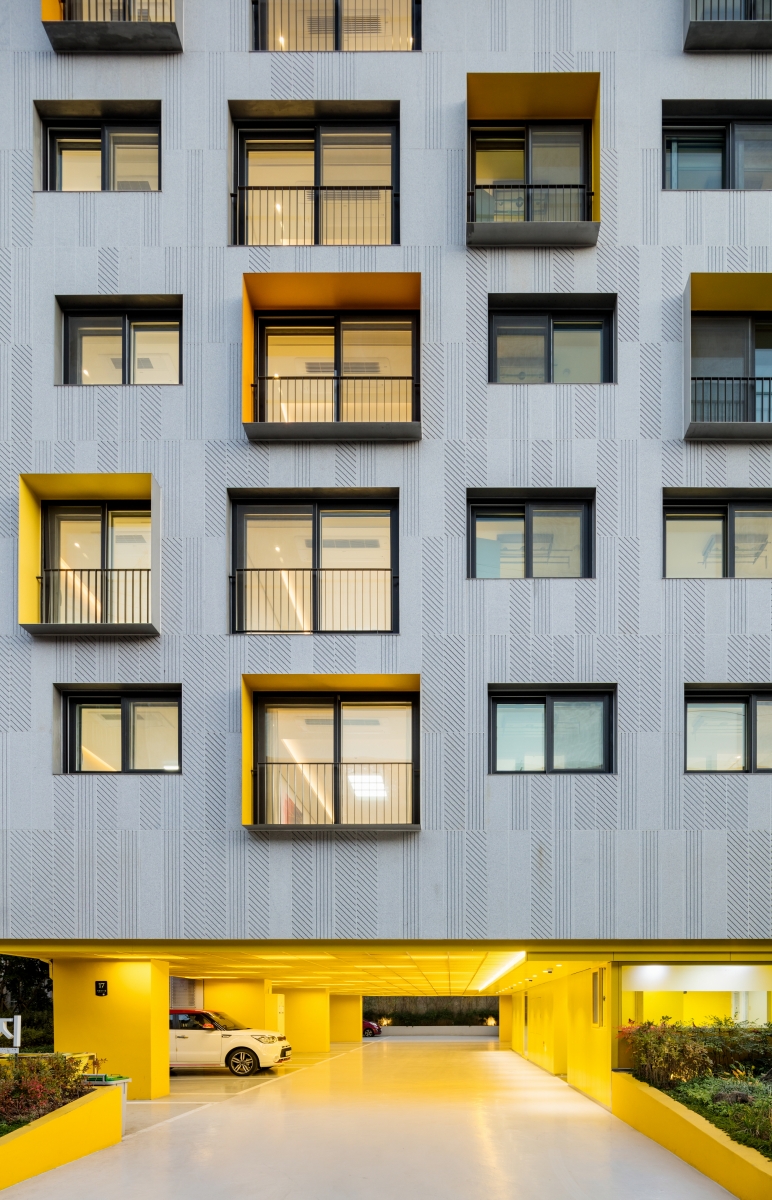 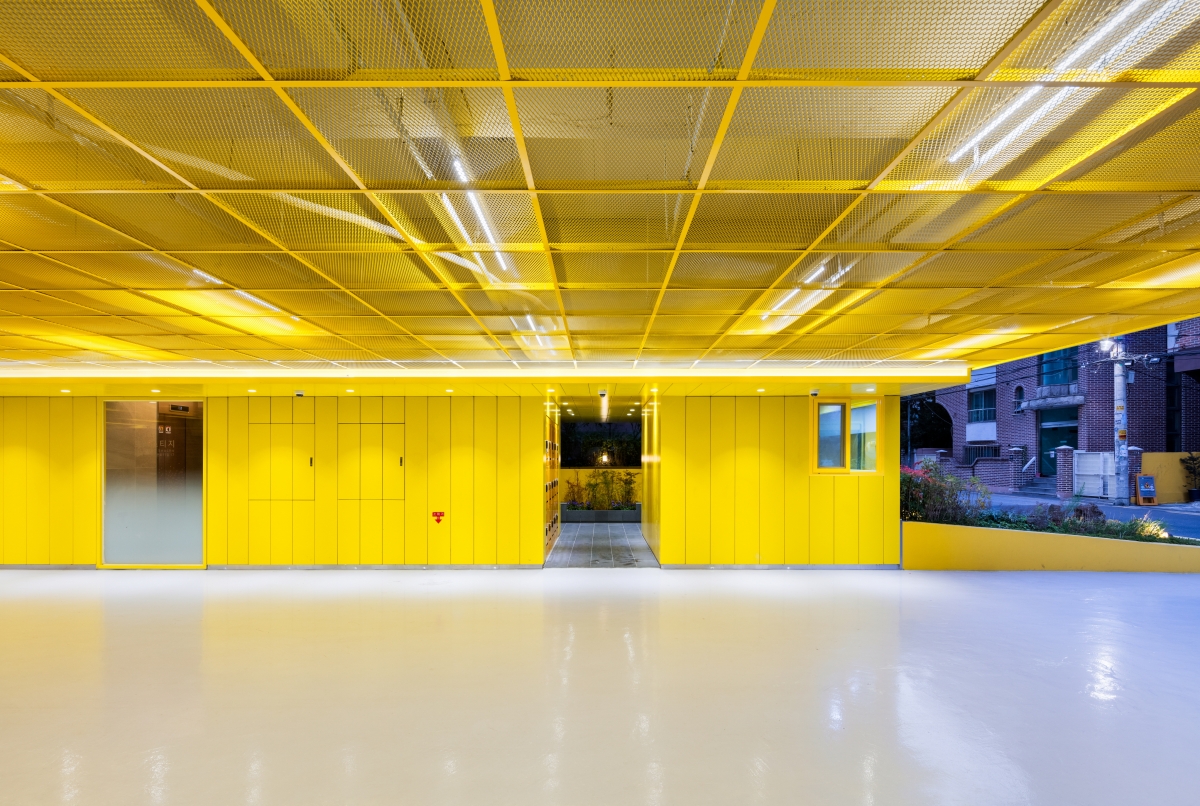 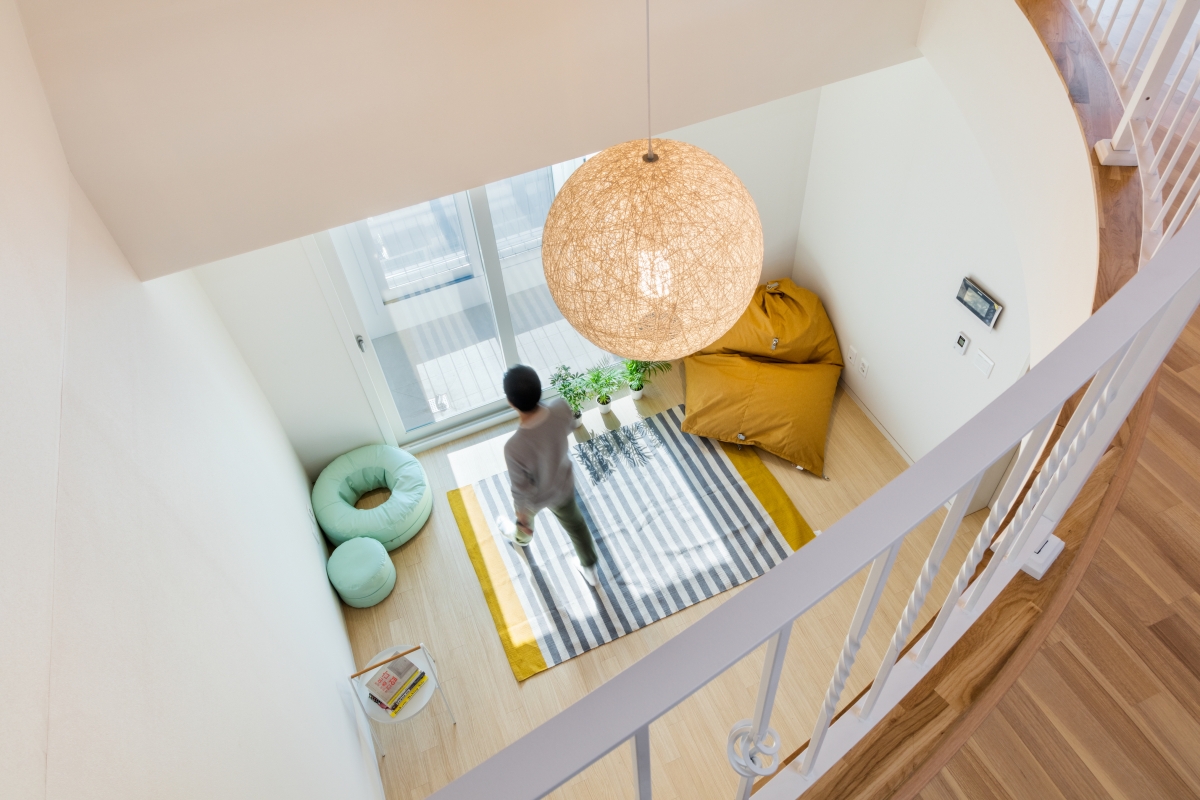 wood, gypsum board with paint, tile

Nam Jungmin
Nam Jungmin is an architect and educator. He is currently teaching as a professor at Seoul National University of Science & Technology and conducting design research as a founding principal of OA-Lab. Previous to his own practice, he has gained his architecture education at Harvard University, Graduate School of Design, graduating with the Letter of Commendation and experienced his professional practice at KVA, OMA and Safdie Architects. He received numerous awards, including Harvard GSD’s Thesis Award Finalist, 2015 AIA International Regions’ Honor Award for Architecture, BSA/AIA’s Housing Competition 1st Prize, and 2018 Korean Young Architect Awards.
No.613 December 2018 architecture apartment seocho-dong road conversation
LIST
bookmark_border
favorite_border
33