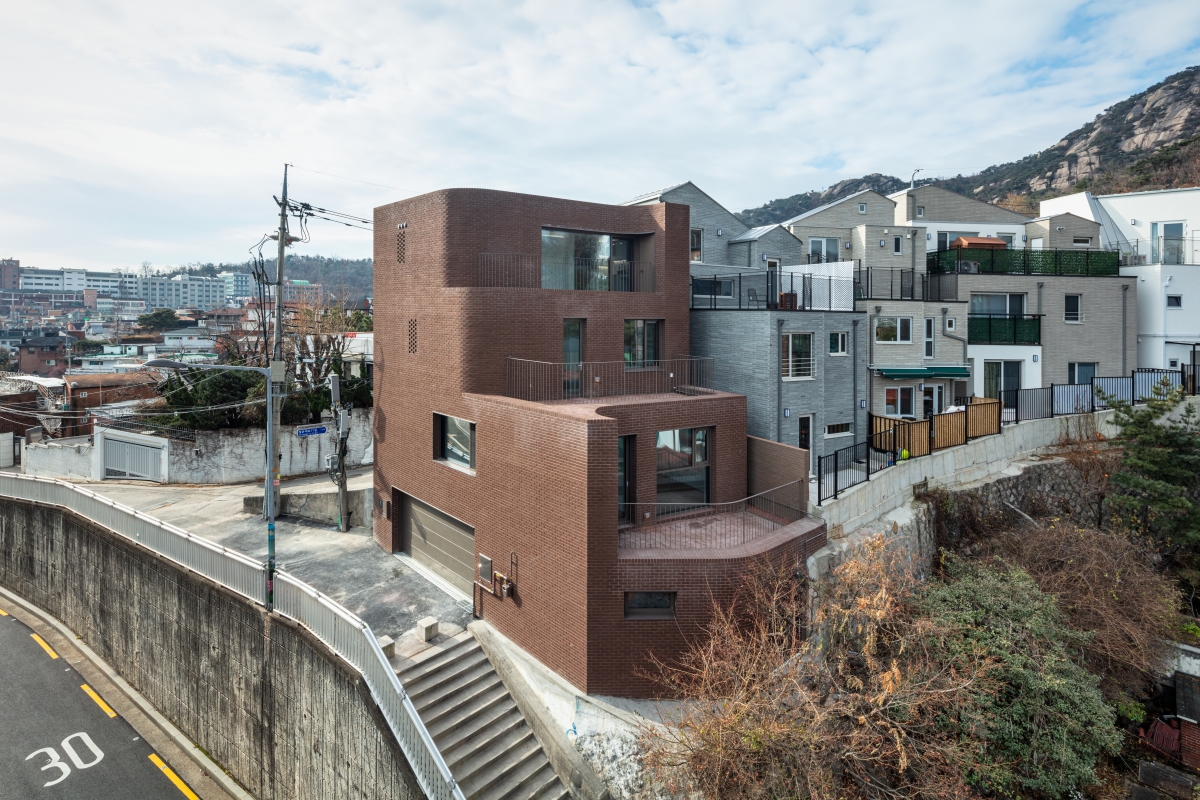 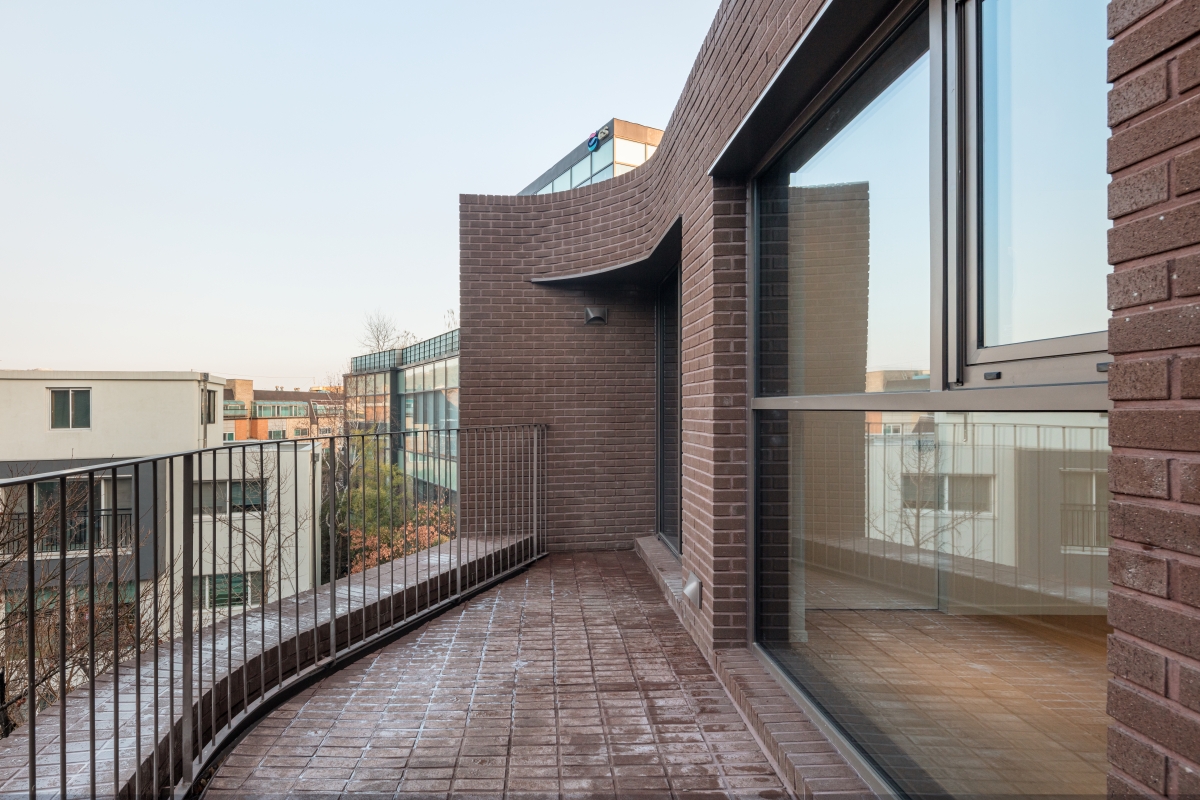 The Borderline Between Nature and the City

Ogindan Dandan is located in a relatively sequestered residential area in Seochon, where the number of cafés and restaurants gradually decreases. In the neighbouring area, one finds mid-to-low-rise residential buildings such as single houses and multihouseholdhouses clustered together along the foot of the mountain, thereby revealing the topography of Seoul with its sharp changes in height. The building’s site rests on a steep retaining wall, which was created when the ridge leading from the foot of Inwangsan Mountain was interrupted and bisected by the road. On the opposite of the eastern main road, the GS Namchon Leadership Center stands tall, boasting of its large mass and scale and thereby overwhelming the surroundings. The site is located at the end of the village, with a clear view of Inwangsan Mountain and Bukaksan Mountain to the north, while overlooking Namsan Mountain and downtown Seoul to the south. It is a place where you can capture the scenery of the mountains in their entirety while living in Seoul. It is also a place in reach of a stroll to the foot of the mountain. In other words, it is well-placed for those who wish to live close to nature without leaving the heart of the city.

At first, Ogindan Dandan appeared to be a closed and hermetic structure. This is due to its appearance which seems to block the inside from the outside as if a rampart were circumvallated to protect privacy. The house is surrounded on all sides with brown bricks, and an elevation facing the main road – thereby exposed to the outside – only has the necessary number of windows and doors as if they were the windows made on the rampart. In addition, the main entrance facing the south alley has been adjusted to the height of the two stories, giving a sense of scale and space that is different to other houses. Rather than creating a sense of openness, a foyer of great height has been crafted in a crevice between brick producing a deep shadow, thereby adding a weighty impression as if it were a rampart. By the virtue of this, Ogindan Dandan has succeeded in protecting the residents’ privacy from being exposed to the GS Namchon Leadership Center and possible views from the roadside. Although it is only a threestoreybuilding, it sits on the steep topography that continues from the mountain, stands shoulder-to-shoulder with the GS Namchon Leadership Center on the opposite side, and has curved forms that express a stately presence compared to its size. Due to this presence, Ogindan Dandan appeared to have become a landmark that marks the beginning and end of the village. Whoever visits this village can recognise it by looking at Ogindan Dandan from a distance. An interesting situation has been staged, in which a single house has become a landmark in the village.

A Northward Direction Open to Nature

Ogindan Dandan looks large from the outside, but I entered the house expecting the inside to be narrow. Surprisingly, it did not feel small, and this was due to the large window that captures the scenery of the north side. When I turned my head after entering the house through the foyer, a view of the foot of the mountain seen through the northern window unfolds into a full panorama. This scenery opens out on each level of the house, enriching the space. The aforementioned characteristics of the site’s location play a role in this. At the beginning of the design phase, the architect suggested to the client that they could set the northward direction as the main orientation. It was a natural result that took advantage of the locational characteristics of the site in order to capture the surrounding scenery and protect privacy while positioning the stairs by taking account of the limits on heights from the north (‘Limits on Heights of Buildings for Solar Access’). Given the location, it was a well-defined solution, but it was also a rather unusual proposal in Korea, where houses tend to face south. The client readily accepted the architect’s daring proposal, and the result has been vividly realised on site, of a value felt when I visited it in person. The light coming from the northward direction is not as dark as I expected. It is not as bright as the one from the southward direction, it does not cast a shadow, and it is not so hot. But rather, it is a pleasant light that illuminates the interior uniformly, all year round. 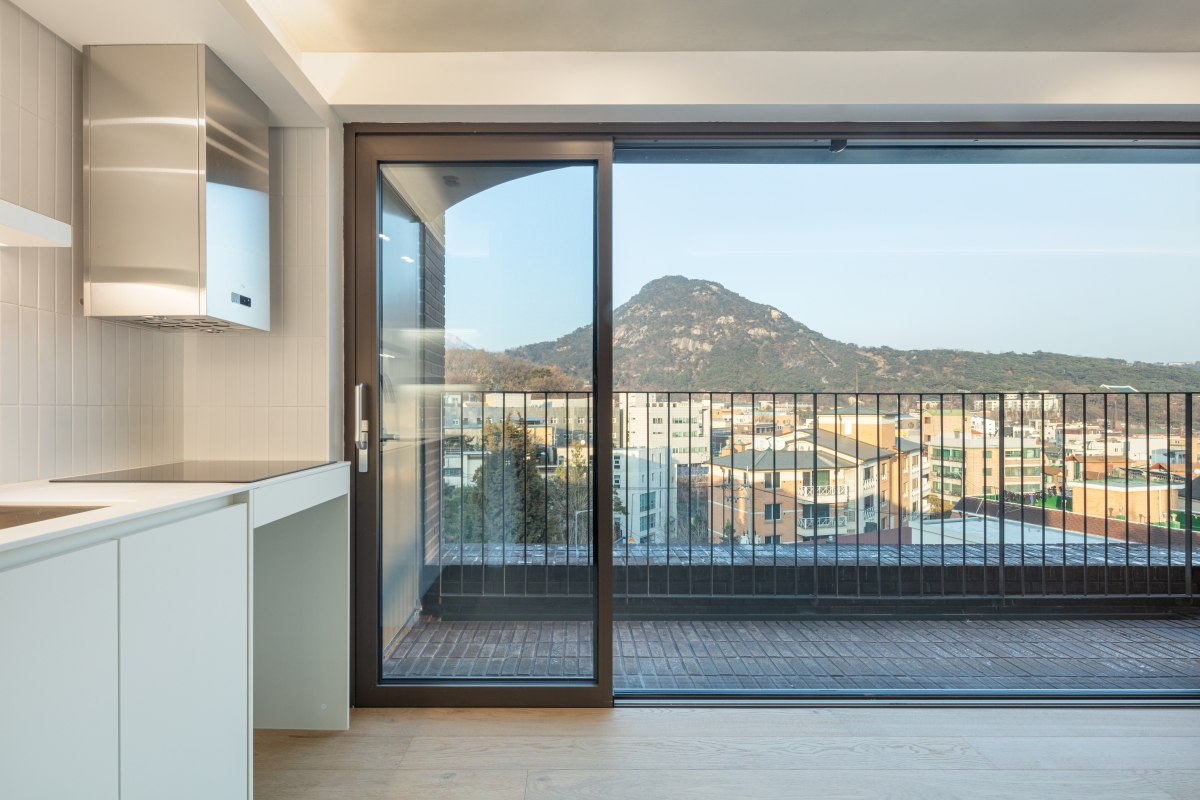 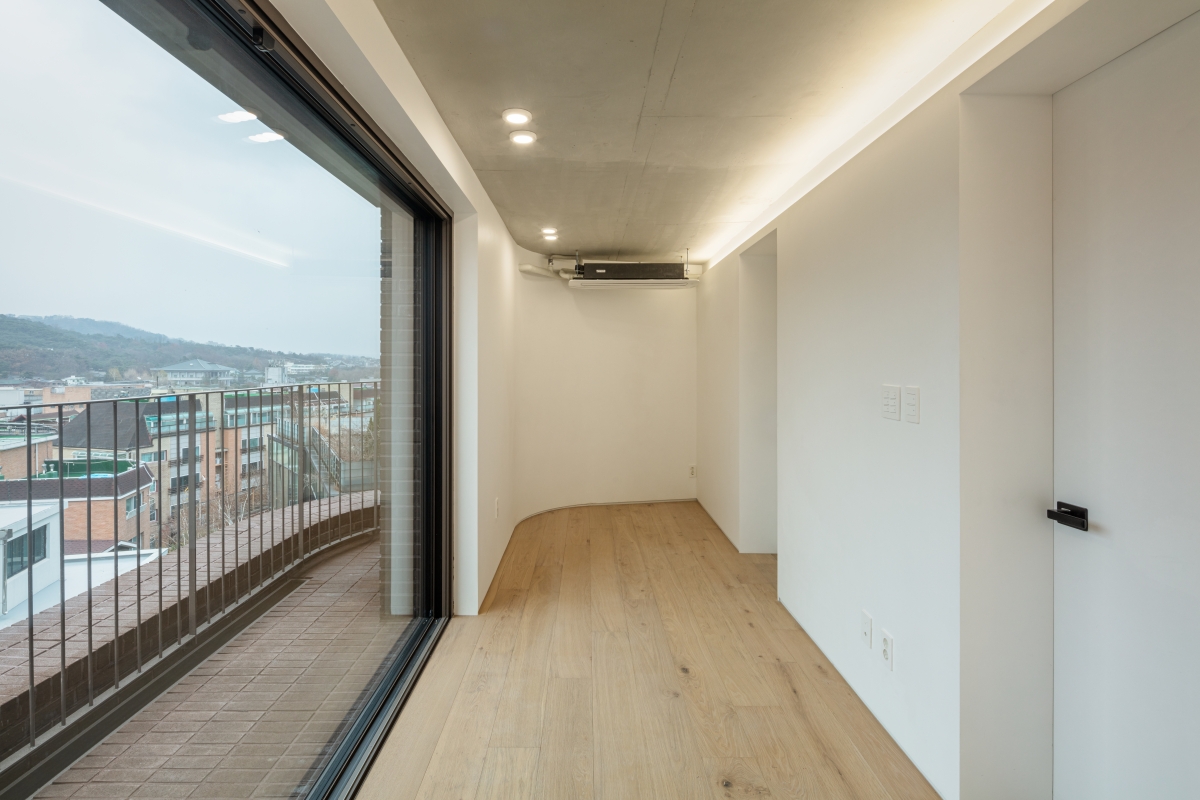 Ogindan Dandan is a house in which each of the family members need space for their personal life, with the parents living on the first floor and the grown-up sisters living on the second and third floors. Therefore, from the design phase, the space was arranged to display different characteristics on each floor by reflecting the individuality of the residents, and terraces with slightly different forms were placed on each floor. As a result, the family was able to have their own space entitled ‘dan’ (platform) while living together in a single house. Such a terrace configuration emphasises the form of the building – which consists of platforms – and the interior space is extended to the terrace, making the interior feel more spacious. Although stairs, bathrooms, and other necessary rooms are tightly positioned on each floor, the terraces present a sense of having extra space. These terraces, evenly distributed on each floor, capture the identity of the platformed building as well as the individually expanded lives of the residents.

A New Type of Single House in Seoul

In Seoul, a single house is a kind of housing that is falling into disuse. In the 1980s, single houses accounted for more than 70% of Seoul’s housing, but now they have fallen significantly, even failing to reach 10% of all residential property. Unable to withstand the changes to the commercialised housing market centred on convenience and real estate value, these houses were replaced by multi-household houses or neighbourhood living facilities or even demolished in favour of large-scale redevelopment. However, even in apartment-dominated Seoul, 35% of the total population still live in mid-to-low-rise residential buildings. Given these facts, the presence of a newly built single house, which carefully considered the urban landscape and lifestyles on a different scale to that of the typical apartment, has great implications. Ogindan Dandan demonstrates that single houses are still a valid housing type for the city. This became a new type of housing, in which its exterior appears as a multihouseholdhouse or a neighbourhood living facility that has maintained its viability in the apartment-oriented residential culture, while its interior is designed to be a single house. A careful examination of the floor plans of Ogindan Dandan reveals that the plans can be changed and transformed to suit the specific living patterns of the residents, like a typical single house. If the walls are partially re-structured, the building can become a multiunithouse, a multi-household house, or even an office. It has the flexibility to accommodate various changes, in terms of the use of the building, that can occur in the future. This can become an alternative to a single house so that such structures might survive in Seoul, where density plays a critical role. 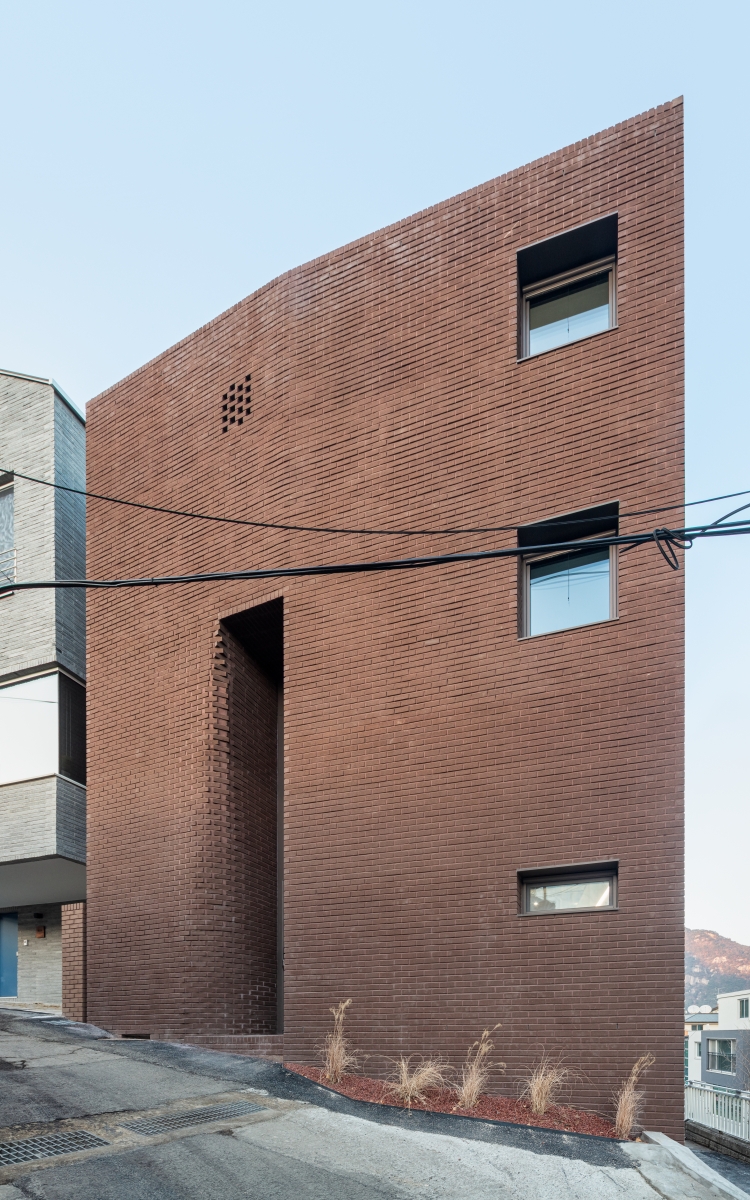 Lim Seungmo
Lim Seungmo established the SML in 2017 after his working experience in Chang-jo Architects and MASS STUDIES. He crosses various fields such as environmental facilities, furniture, sculpture, interior design and architecture under the motto, ‘Form follows possibility.’ He received the interior design prize at 2017 American Architecture Prize, and was selected as the 14 emerging designers by the Interior Design Magazine in 2018. His recent project, SOSEUM won the Popular Choice Winner at the 2022 Architizer A+Awards.
Nam Jungmin
Nam Jungmin is an architect and educator. He is currently teaching as a professor at Korea University and conducting design research as a founding principal in OA-Lab. Believing design should engage with society and everyday life, he tries to build a bridge between academic design-research and practice, through which he believes that he can contribute architectural culture and society. He has received numerous awards, including 2015 AIA International Regions’ Honor Award for Architecture, BSA/AIA’s Housing Competition 1st Prize, and 2018 Korean Young Architects Awards.
No.658 September 2022 Ogindan Dandan SML Lim Seungmo Nam Jungmin Ogin-dong urban-type single house elevation brick terrace flexibility
LIST
bookmark_border
favorite_border
0