The Uncanny Valley and the Burrow: MOM-HOUSE 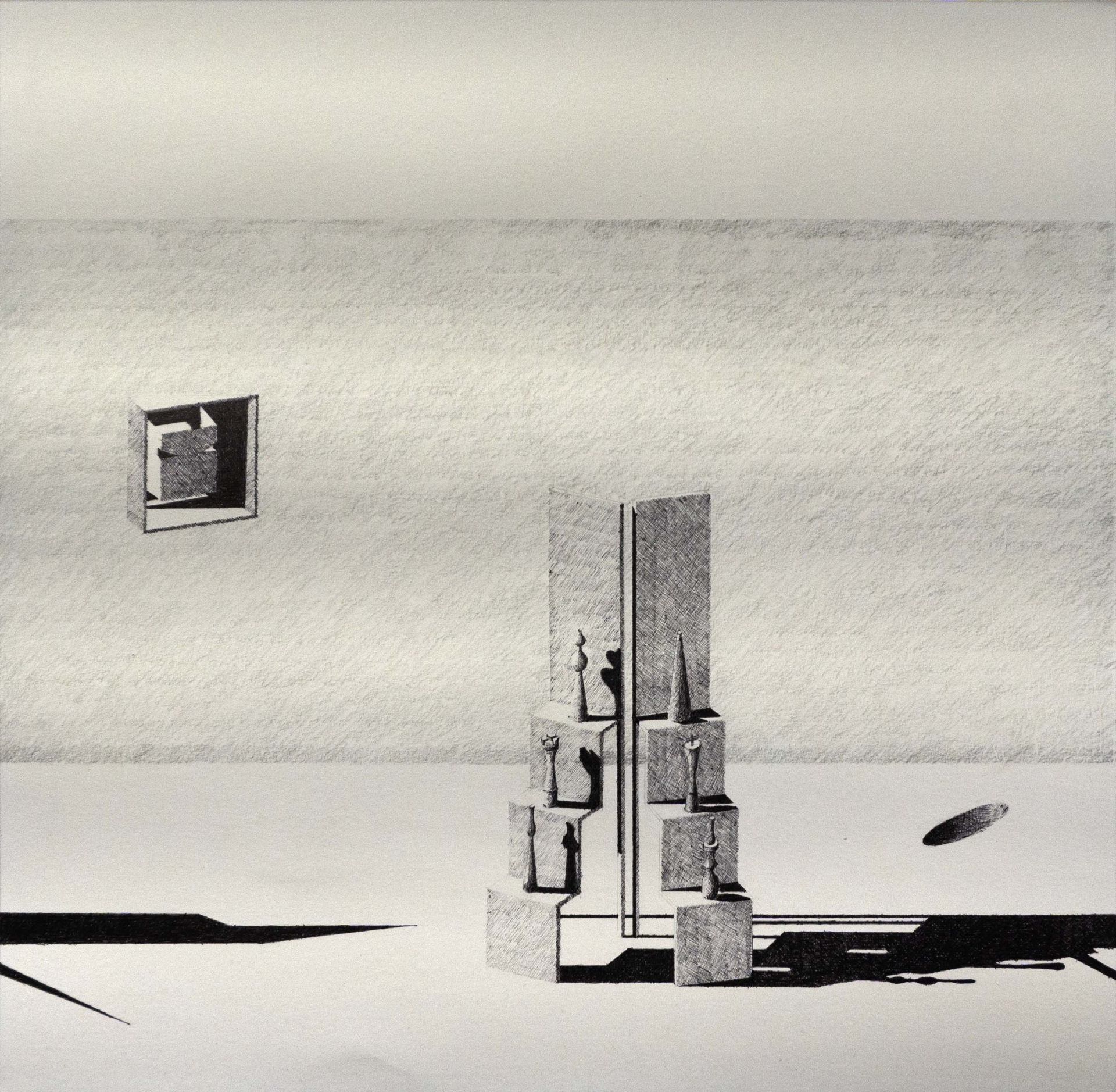 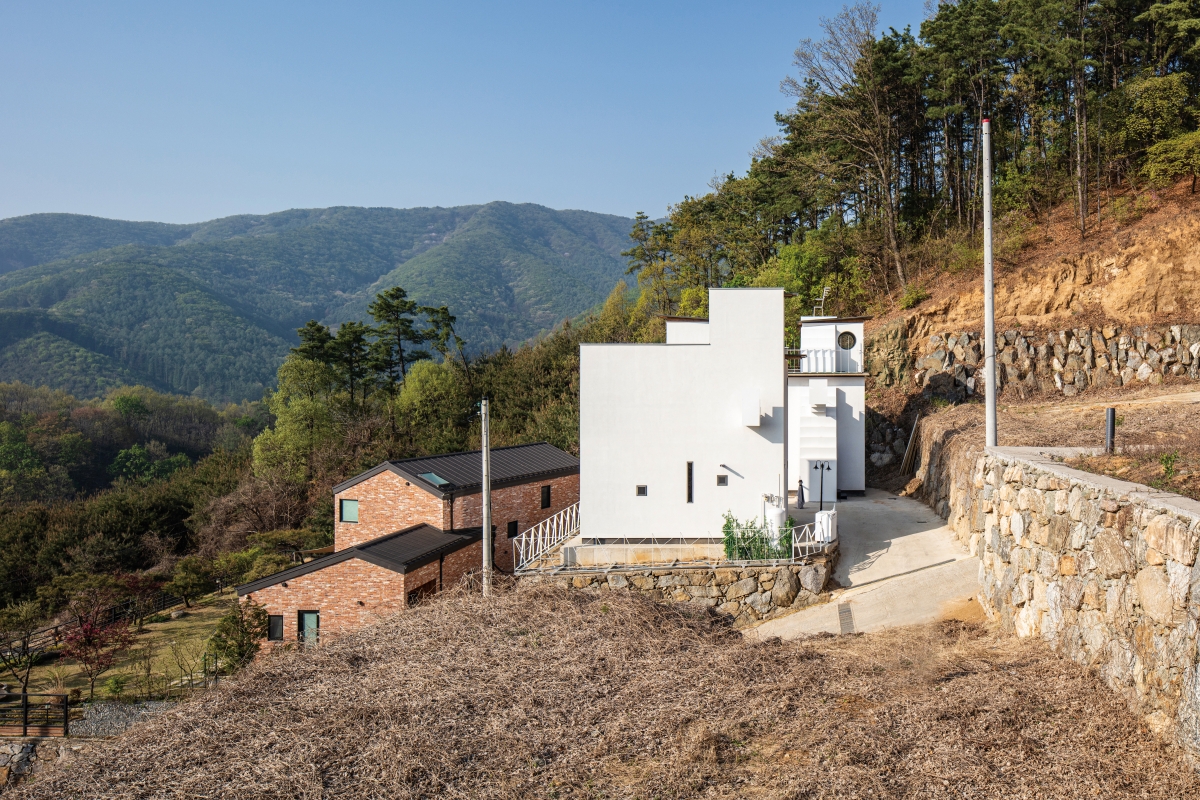 An Uncanny and Lucid Story

Stained in White With regards to the MOM-house, which develops a rhythm that runs in parallel to a house facing the same plot, the architect noted, ‘the functions and performance of life will be left for a while in the hope that a new story writes itself as in a form of an original experience’. Pondering the remark, it appears to tell us about some kind of automated storyteller functioning unconsciously so as to explore the untapped potential of the house and not the story of the residents or the house itself. It is perhaps to speak up a ‘unique voice’ about where we live. The difference might be that this gestures towards resistance in order to carve out a subtler reading of the meaning. Instead of the predictable ‘home (sign)’, the architect seems to consider ‘what is the house animated by?’, a question that acts as the main plot springing out of a semantic network of meaning. This is why the story behind the MOM-house is somewhat unfamiliar. Looking around this area, situated between two houses of white outer skins on a terraced site, it comes to us as a dialogue between two characters in a story, not just as buildings. They say the protagonists build up a story through ‘episodes’ in the background (time and space). The distinctive nature of architectural stories lies in their ability to absorb all three elements of a story: character, episode, background (causal structure between scale and funtion, complexity). The MOM-house dreamed of ‘story-generator status’, an existence that would draw out new stories and not just the stories of the residents. Perhaps, one thing that you don’t want to miss when taking in the MOM-house is its rebellious attitude and existential approach. 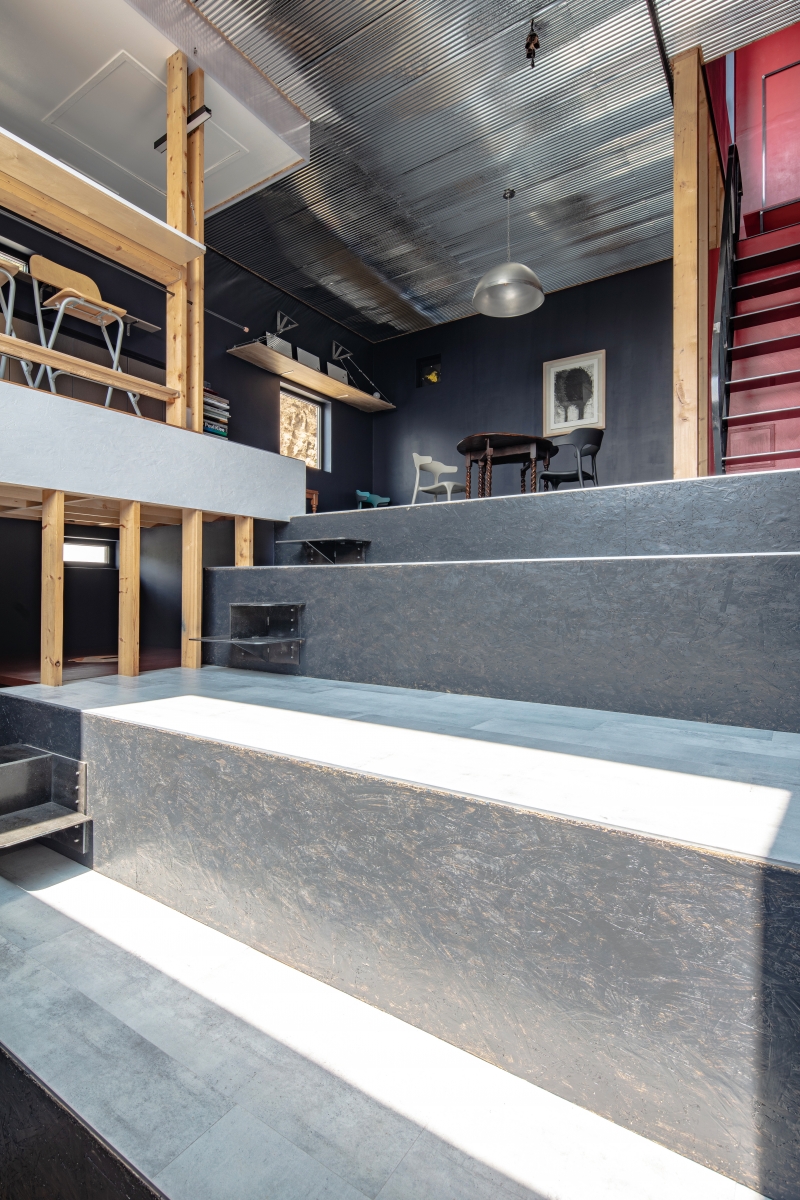 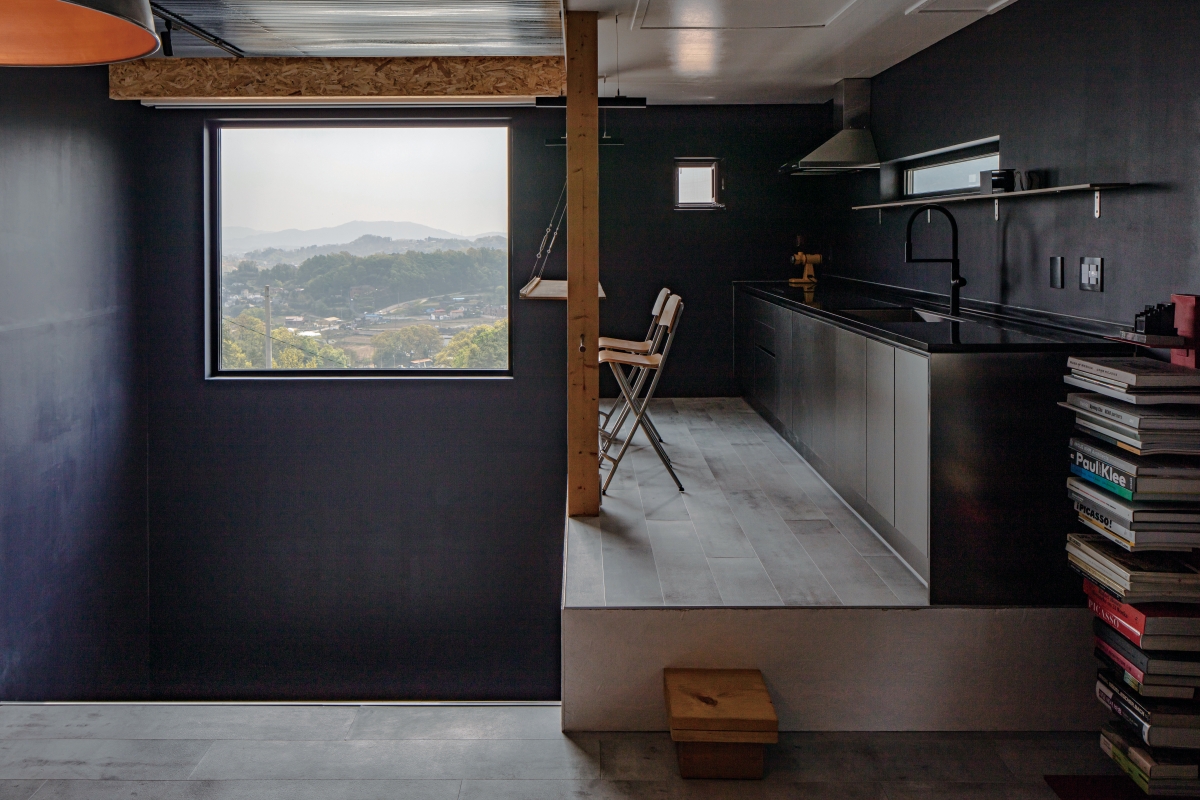 A bold move made by the rebellious MOM-house was the formation of a monumental stair structure that glides up to create a vertical-horizontal tension diagonally in 38㎡ ​ constraints. The strange and obscure strain of this structure, which captivates the imagination as entering the MOMhouse (rarely referred to as a house), is the brute force that emerges from the ‘empty verticality’ brought about by the stair structure surrounded by a black wall. The stair structure, stated the architects, ‘was necessary in the construction of ʻhigh rises to combine the walls and floors’ʼ, and has become the backbone of the MOM-house, a ‘voided center’ that repels continuous discontinuous potential energy. The entire floating perception and neural network are engulfed in a black hole. The upper part of the stairwell, including the raised living room and the floating kitchen, is empty enough, but precisely because it allows you to experience all kinds of auras, moods, and senses of space that cannot be captured. Although offset by the diagonals, the strange energy substance lurking in the whole is thought to be the ‘differential vertical force’. The variation in section thickness of the black metal stairs that support the the blunt wooden stairs, as well as the slightly offset vertical steps, correspond to the colour texture and the sense of quality. The observation tower at the top, distinguished vertically in bright red, completely separates me from MOMhouse and the world, when I welcome others on a slender black chair without a rack. If the horizontal is for diversification, then the vertical creates new fields and places through differentiation. This is because it breaks down and transforms the perceptual field of things into a static state. Is this neither horizontal nor tilt vertical force? If ‘novel’ relies on the horizontal combination of metonymy, ‘poetry’ relies on the vertical jump of metaphor. Thanks to a vertical force that severed existence and set off the events in Cairo, MOM-house can now stand in the world as an independent soul. This is because the vertical line faces the object at a ‘right angle’. The second main aspect that makes MOMhouse appear to be an ‘uncanny valley’ is a giant window that sits flat on top of a black wall. It is not simply a visual frame for enjoying the outside scenery, but two roles that create an interior atmosphere by absorbing sufficient light. First, the sensitivity of each colour combination applied to the entire MOM-house is scaled up as expected. The black wall that absorbs thoughts, the mirrored ceiling that reflects the joy of life, the gray floor that calms the mind, and the red wall of the observation deck that welcomes others, the sunlight that penetrates every moment— all makes the whole a bright, unfamiliar place. The second is the strange sense of space echoing up the tall stairs. Observing it from the living room, the huge stairway has become a cliff that seemingly has no end, and the eyes that peered out at the world from the window fall upon a dark world. The dark descending energy that devours any visual ‘pleasure’ like a monster transforms a vibrant vertical into a heavy gravitational field and confronts the absence and existence, imagination and reality, and the image of life and death with physical (tactility) rather than mentality. What’s more frightening is that it might be looking at me, and there might be something (undertone) in the abyss beneath the stairs which is also black. The assemblage of this descending gravitational field and energetic light rays veers away from MOM-house like a sweet seesaw game of staring and gazing. 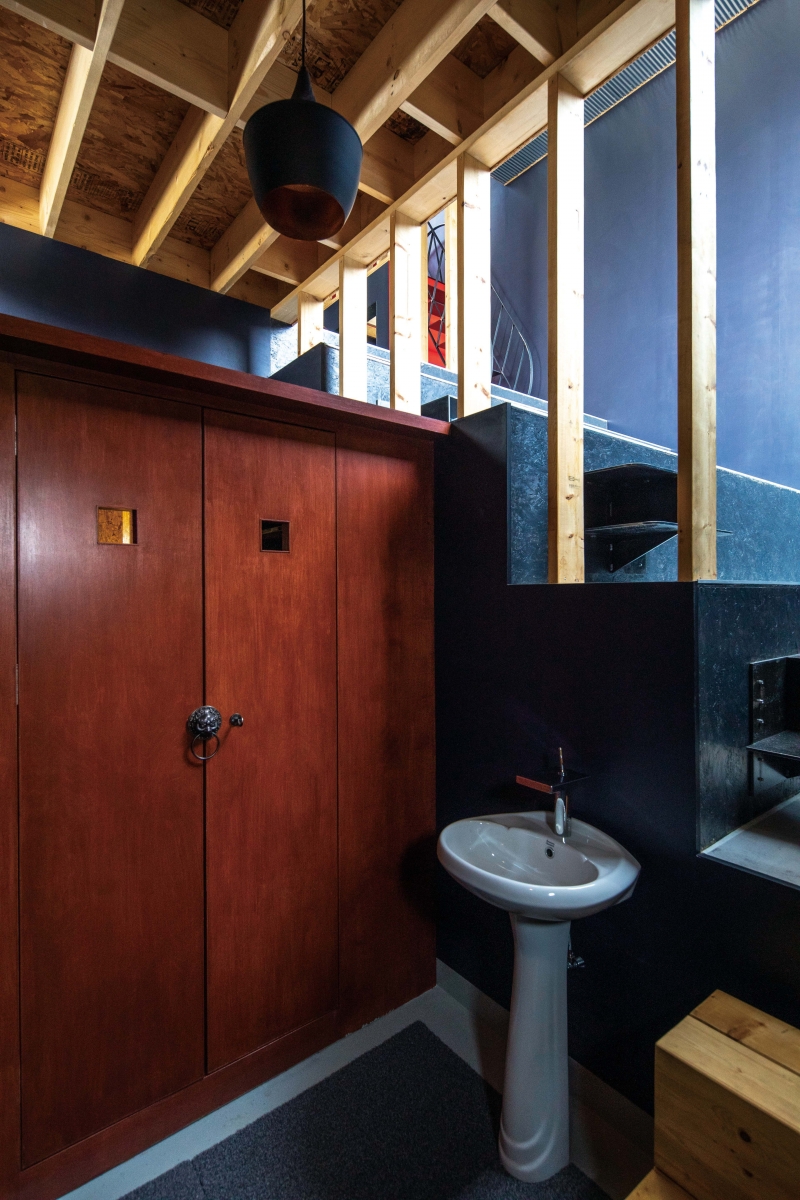 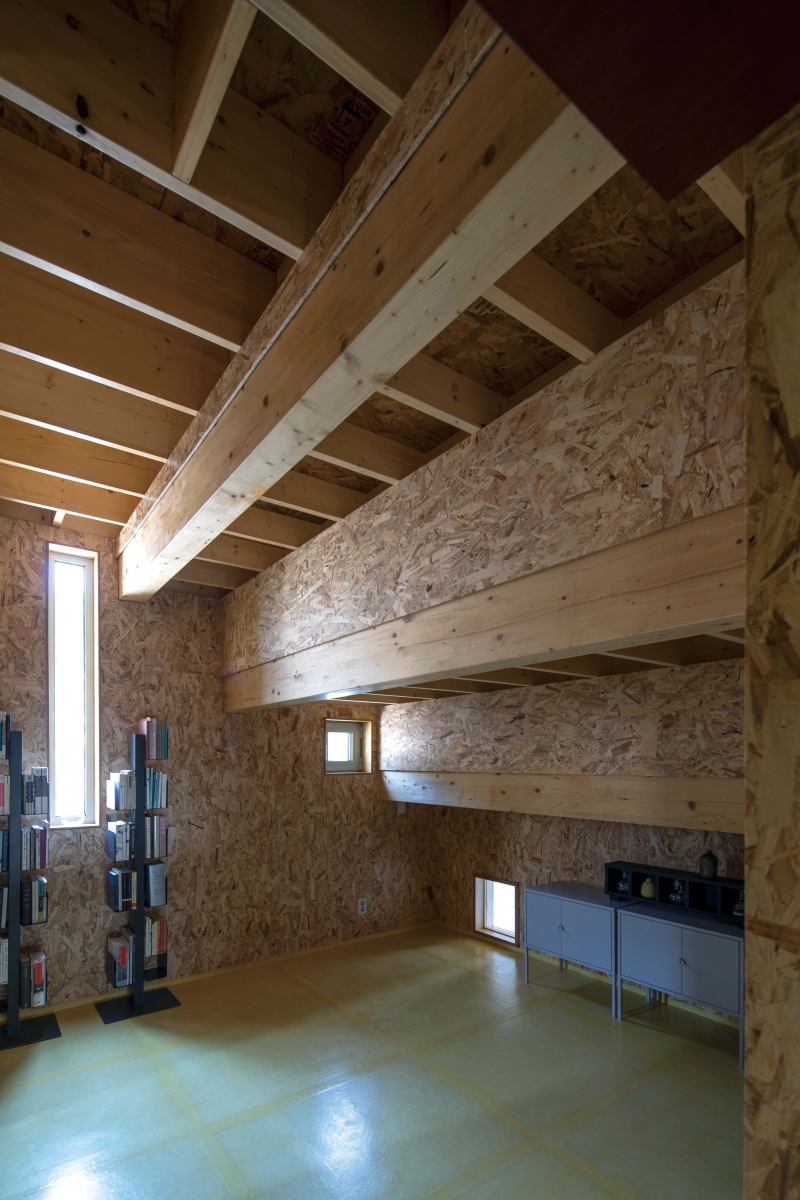 The Acrobatic That the Place and Space Dream of

If the stairs, connected by a long take and the second-floor space, are a field for ‘sensory manifestation’, the private room on the left side of the entrance is an organ tooled towards ‘bodily maintenance and rest’. Rubbing mahogany leads you into the burrow with an occult sense of mystery. The long, narrow interior space is made to float, playing on the sympathetic angle of the material, which is combined with a natural wall (OSB plywood) and a yellow traditional carpet. The edges lit by the light embrace the body, and the small square window with a hole in the room turns into a brazier, which naturally warms up the conversation between me and myself. The firm and light-weight wooden structure, including the exposed ceiling space, reminds us of the true nature of the MOM-house and reminds us of flesh and blood made of soil and sunlight, and dreams of a ‘tectonic as a story’ instead of matter and space. The bedroom in the burrow, as unfamiliar as the ‘uncanny valley’, permits coexistence between the stairs structure, the spine of the MOM-house, and which may have completed this spatial narrative. The ceiling above the bed is filled with a ‘heavy vertical rhythm’ that brings the MOM-house to life over time. This is part of the MOM-house, but it is also the entire MOM-house that materialises the ‘uncanny valley’ and ‘burrow’. Perhaps the possibility of becoming a story generator is hidden here. Encountering such an object and realising what such an encounter means are the ‘one and only moments when you can meet an object (others) that might not be me and dream of a new world’. Judith Butler described Franz Kafka’s ‘burrow’ as an expression of human vulnerability and dependence on others, but MOM-house allows you to sail extensively through uncanny valleys all day long. Sometimes they lay anchor in a spot and dream of a new journey. The MOM-house, which aims to create the acrobatic that the place and sapce dream of, is a place where people face the hospitality of everyday life in its entirety. 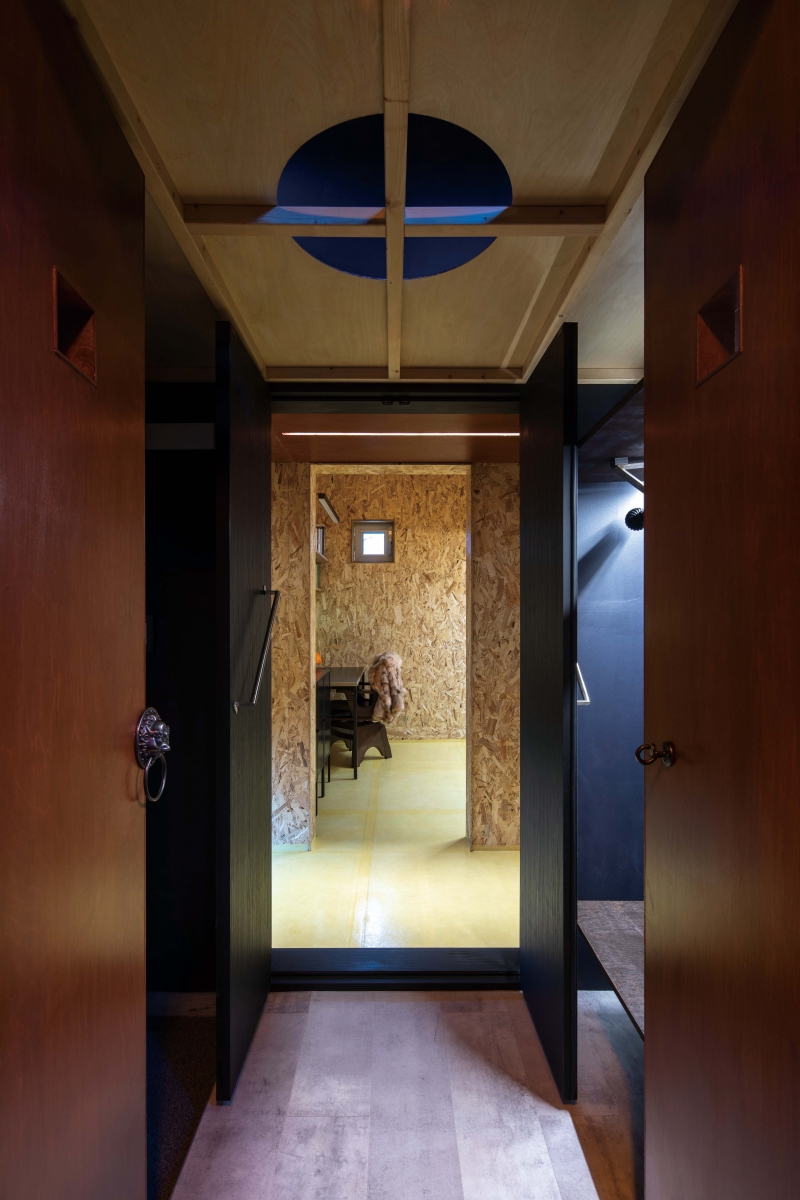 oriented strand board, painting on gypsum board, S

Na In-Hye
Na In-Hye is a researcher cum architect in empty forest architecture, who works on both architectural practice and research. Ze has dedicated zirself to performing the architectsʼ social role and cultural practice through architecture. Ze is also an adjunct professor of Gachon University.
Park Youngtae
Park Youngtae graduated from Hongik University with a major in Industrial Design, and received a masterʼs degree in spatial design and a doctorate in architectural design from the graduate school. He practiced architecture and spatial design as a designer and design director at JAD planning Co., Ltd. He is currently a professor of Interior Architecture Design at Dongyang Mirae University and a member of the Editorial Board of the Architectural Critics Association. He co-authored Architectural Concert (2012) and Culture Reading through Design (2014).
No.658 September 2022 MOM-house empty forest architecture Na In-Hye Park Youngtae Gachon University Dongyang Mirae University Architectural Critics Association The uncanny valley and the burrow uncanny burrow Adolf Loos John Hejduk Judith Butler Franz Kafka
LIST
bookmark_border
favorite_border
0