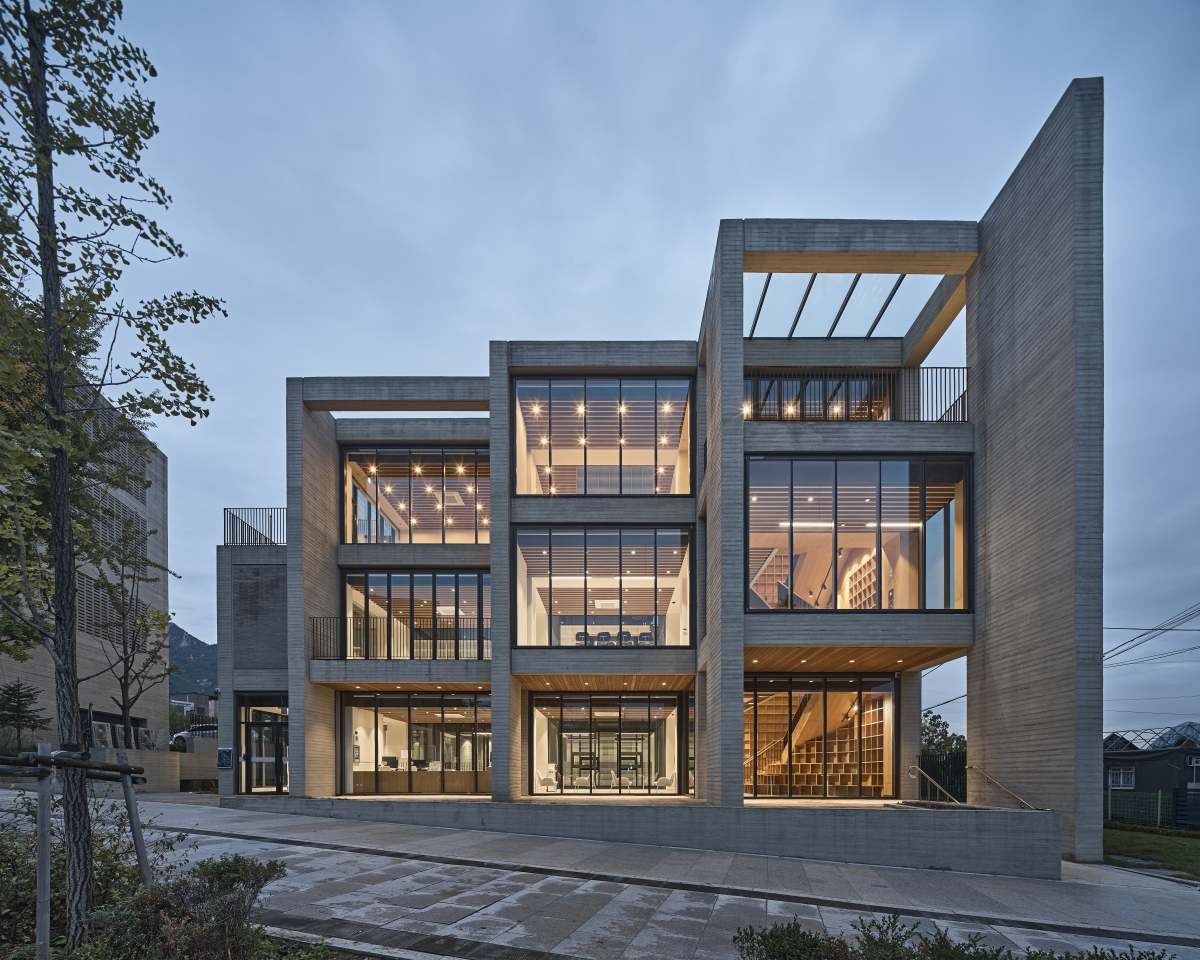 On the way to Bukhansan National Park in Dobong-gu, Seoul, set against the beautiful natural landscape, the site is located at the point at which the urban and rural meet—between a dense residential area and a restaurant district lined up to serve hikers on the northwest side and an apartment complex on the southeast side. As a consequence it is not only residents that move through this area but curious hikers of various ages who frequently pass by. As such, contemplation of the unexpected spatial possibilities created by space of transient movement or occupation is here made manifest, as well as of an internal space that will attend to library users and the connections to be forged between them. It was designed as a communication channel between the internal and external that would bring together various events in the city, and as a larchiveum (library archives museum) that will store, display, and empathise with the history of democratisation. In this way, it also stands in commemoration to the former member of the National Assembly Kim Geuntae, who left a profound mark on the development of Korean democracy.

Heteromorphous Terrain and the Grid

The site is composed of two pieces of land to resemble a snail. The design process behind planning a library in this context began by employing a simple grid rule. The grid system is applied to the structure of the building, the paving pattern of the flooring on both interior and exterior spaces. In addition, the grid applied to the heteromorphic site meets the site boundary and uncovers a new space. In this way, the architectural plan defines the spaces between the grids systematised throughout the site and lends character and material properties to each zone. The framing network is constructed by compromising to the different types of terrain found on site, and the spaces left between them have been engaged through a single construction method called ‘infill system’. The exterior façde is saturated with building materials and elements such as bricks, glass, wood, windows and doors. The interior completes the ‘filling’ with physical features such as bookshelves, desks, and walls, as well as various expressions and actions of library users. In this way, the combination of space, materials, and individuals filling the grid devise diverse interactions both inside and outside the building.

The Organisation of Space

The exterior construction method, which constituted the use of bricks, glass and wood in the concrete grid system, has also been applied throughout the interior. The spatial system created by the white walls and pillars has been enhanced by wooden louvers on the ceiling, bookshelves resembling white walls, and views of the landscape that complete the experience within the library. The staircase-type bookshelf, which, of the various spaces inside, grabs our attention, and comprises the primary circulation of visitors up through the building. At the same time, it was planned as a space in which experience and to interact with books and bookshelves, forming the ‘spatial identity’ of the library. This space, where more active communication between the building and the user occurs through sitting, touching, and experiencing beyond the act of standing on the floor, fuses each floor space with its collection and layout in one. The ‘Kim Geuntae Memorial Bookshelves’, located on the library’s west side with three open floors, extend high into a part of the structure that is hard to reach. The high space, a void within the buidling, contains not only books but also the spirit and thoughts of the deceased and sends, through the interplay of light and shadow, the flow of time into the library. The commemorative bookshelves, that converge at different points when viewed from each floor, have become a landmark that suddenly remind us that the place in which we stand is the Kim Geuntae Memorial Library. Meanwhile, the gallery on the north side has both vertical and horizontal continuity that circles and communicates with the reading space. This space, which captures and reveals the various traces along the path to democratisation left by the late legislator, works as a single background, like a sheet of white drawing paper.

Both ends of the two buildings are connected by a bridge-type passageway to create a space that works as one on a site consisting of two lots. The remaining external space naturally forms a courtyard between the two areas, creating multiple layers and depths while embracing views of the exterior inside the building. The spatial structure, which circles the courtyard and alternates inside and outside, continually affirms the self, the other, and one another.

The site adjacent to Bukhansan National Park is a viewing point from which one can see both Dobongsan Mountain and Bukhansan Mountain to the west and Suraksan Mountain to the east. With the natural landscape as a background, there are three-dimensional external spaces to host various cultural events throughout the library, creating moments of communication, both large and small, sometimes toward nature and sometimes toward the city. When the open roof garden accommodates a large number of people with Bukhansan National Park as the background, it creates a sense of communion with the surrounding natural realm. The external space ‘Chumoru (memorial space)’ on the second floor connects the library and the gallery, and cannot be seen at the west end of the library. At the end of the façade, which increasingly conceals itself without revealing its culmination, there is space for rest like a pavilion of traditional architecture, stimulating the curiosity of passersby and communicating with the city.

The rigid yet somewhat blunt face of the outside of the Kim Geuntae Memorial Library, the hidden side of the materials, and the inner coexistence open to accept and communicate with the surroundings, commemorate and preserve the noble sacrifice of many who aspired to achieve the democracy we enjoy today and the warmth of will that lies within. 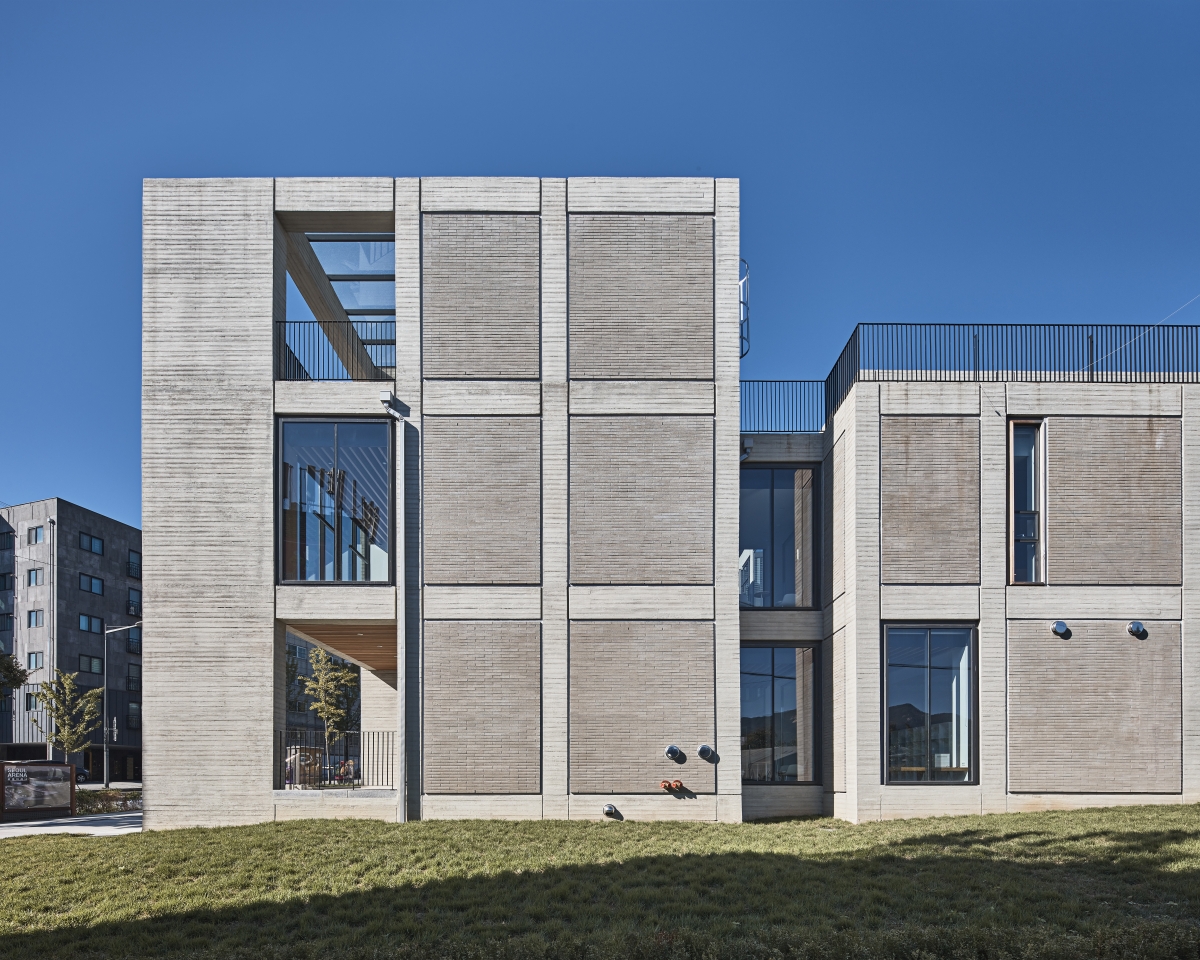 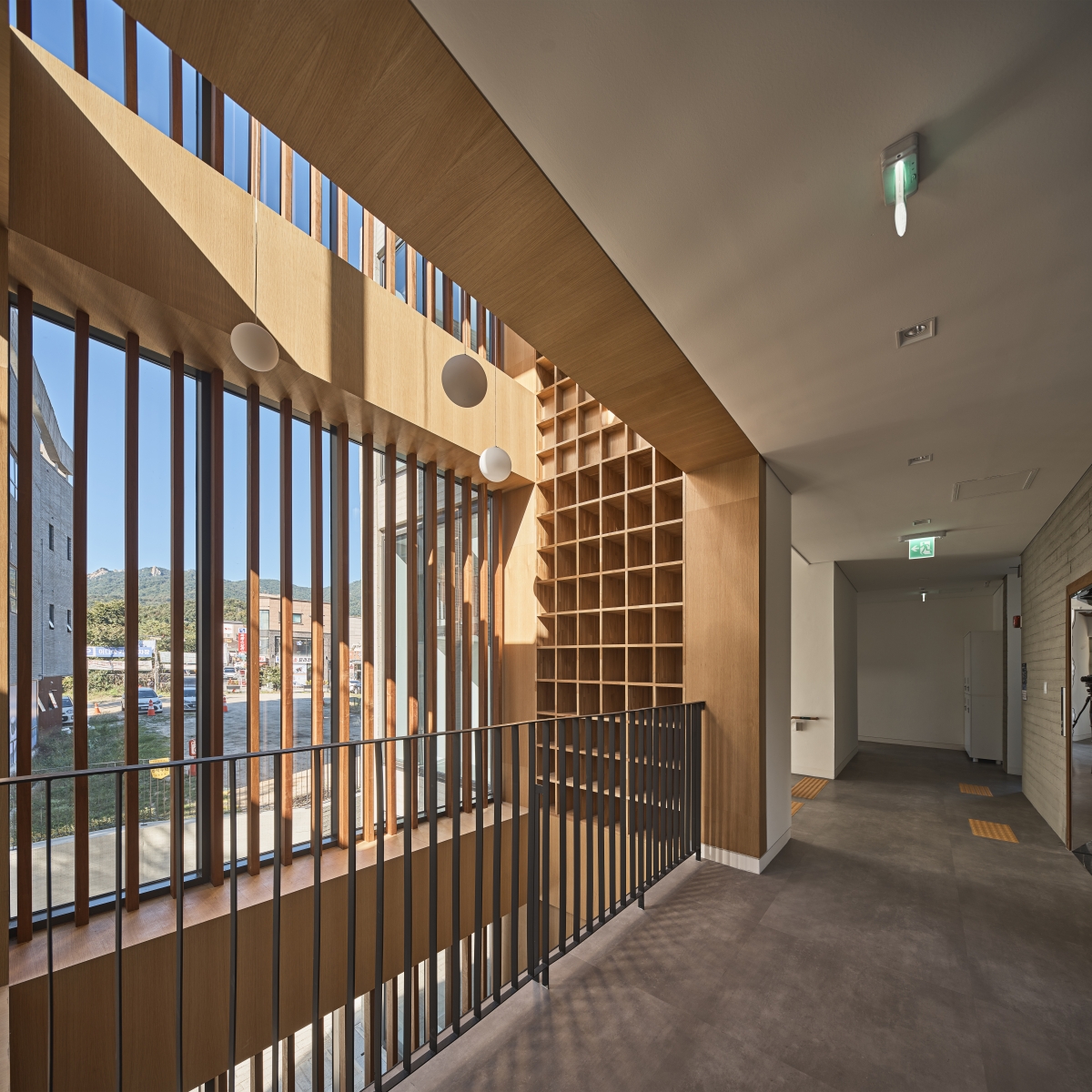 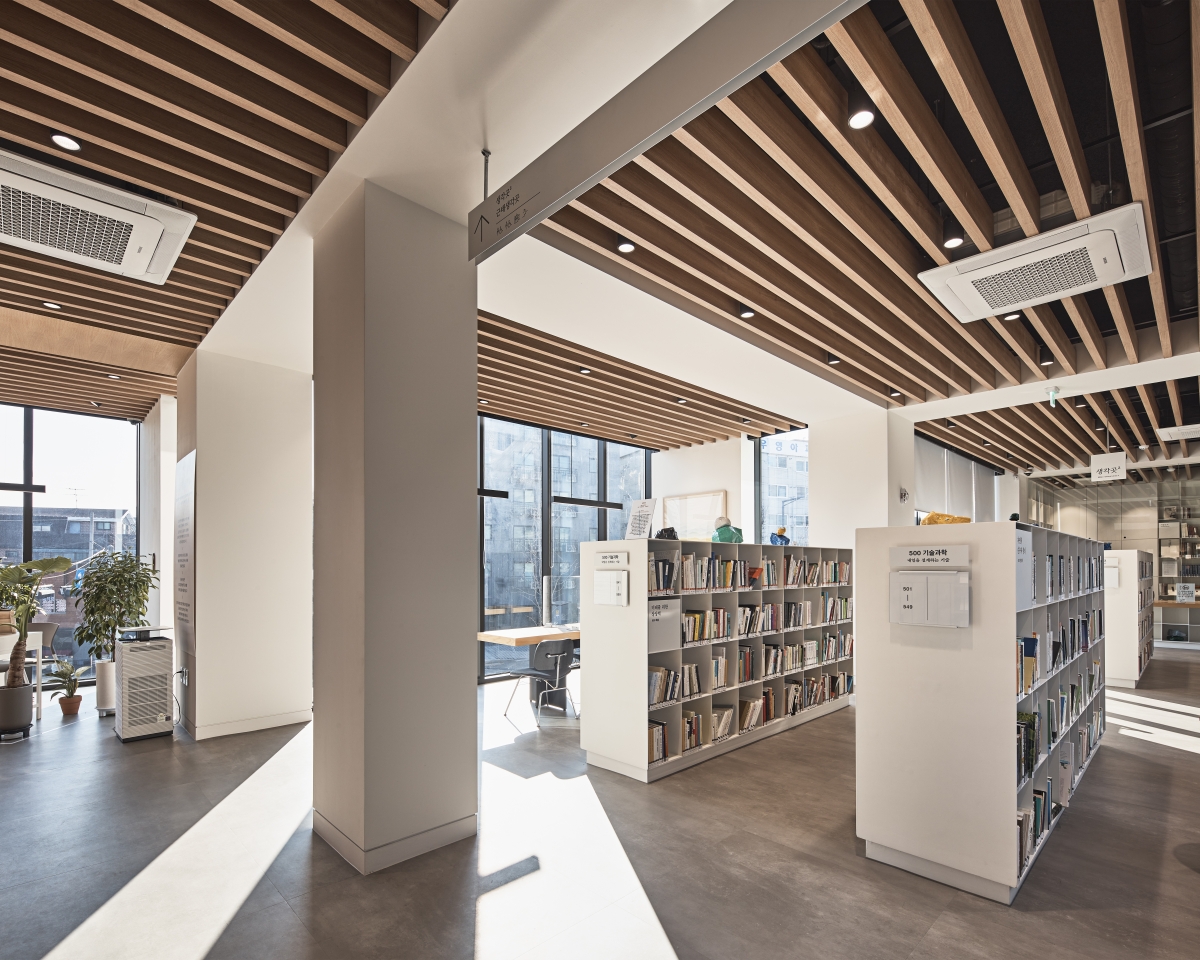 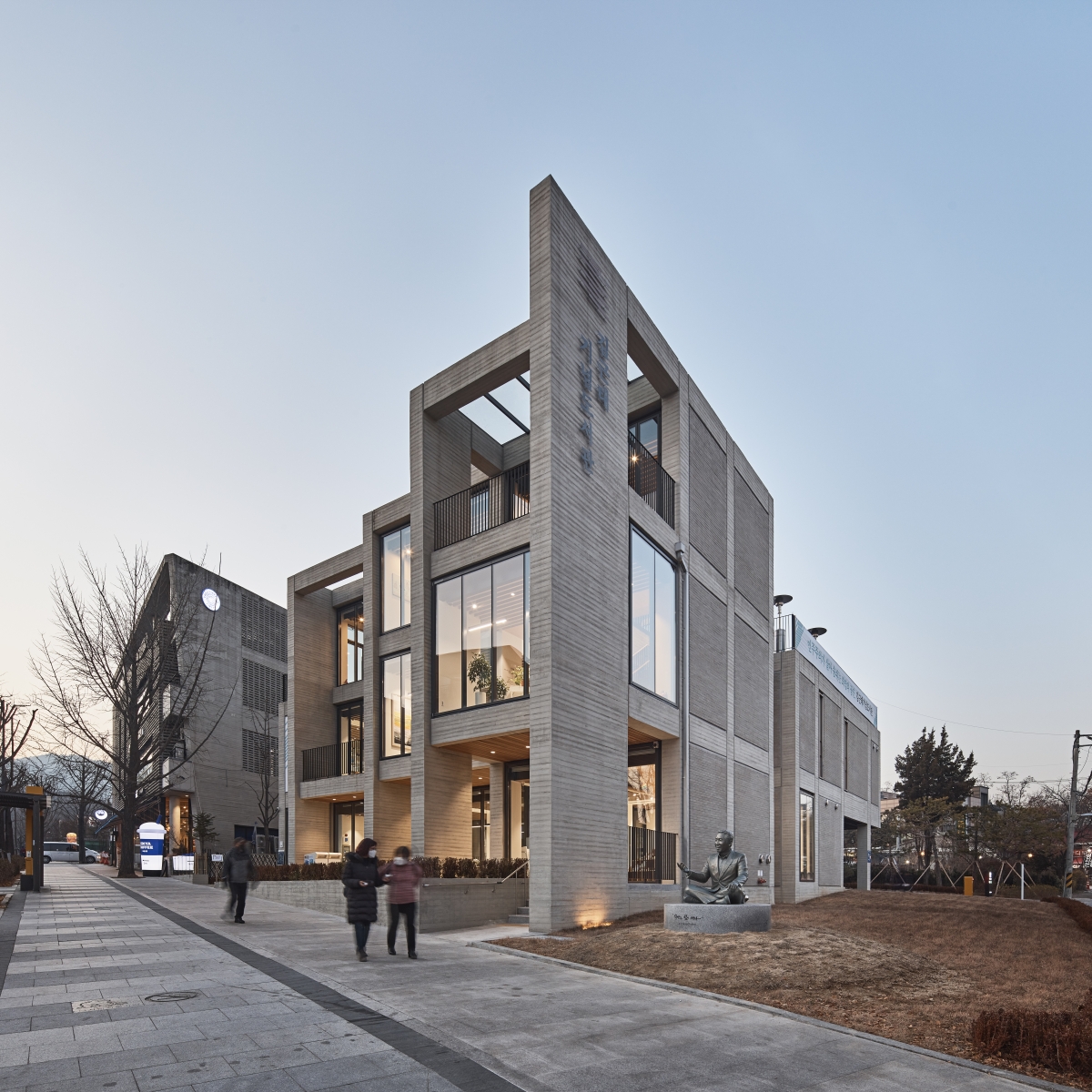 Hong Kyuseon
Hong Kyuseon graduated from Korea University and Columbia Graduate School of Architecture with the highest degree honor. After working with Grimshaw Architects and SOM in New York, he opened his own practice Yeoneu Architects in 2016. He has been teaching as a professor at Hongik University since 2015, paying attention to the boundaries of architecture and the various possibilities created between them.
No.657 August 2022 Kim Geuntae Memorial Library Hong Kyuseon Yeoneu Architects Dobongsan Mountain Dobong-gu library gallery museum archive larchiveum competition boundary grid grid system infill
LIST
bookmark_border
favorite_border
0