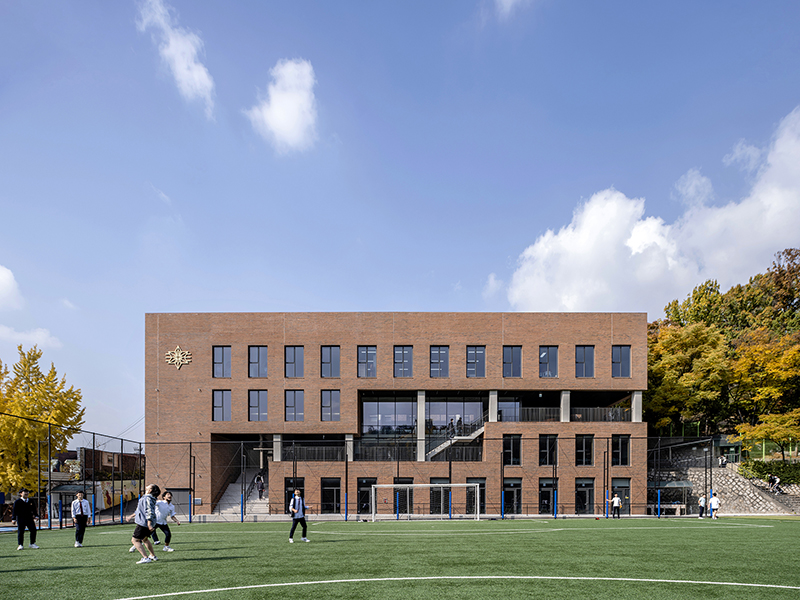 Dongsung Middle and High School is a Catholic school with a history that stretches back over 115 years. Established as the elementary school Soeui School in 1907, it relocated to a newly constructed site in Hyehwa-dong in 1929 and has continued to exert its influence over the region. Dongsung Middle and High School is similar to the university campus typically found in Korea, with seven buildings set close together on a sloping site a step in from Daehak-ro. The Venus Hall of Dongsung High School is situated in the deepest part of this campus, on a narrow sliver of land between the main building of the high school and the schoolyard.
Concrete Wall
The site on which the Venus Hall was originally built accommodated an extra- curricular activities hall with clubrooms and study rooms. The concrete building, finished in tawdry white paint and so set apart from its red brick neighbours, comes across as a hastily built storage facility. It settled into its context like a heavy set wall, with only a dark 4m wide alleyway distancing it from the high school main building. Students in the classrooms facing this building were forced to look out at this white wall all day long, and to walk all the way around the building to get to the schoolyard. The principal of Dongsung High School, a priest, wanted to demolish this ugly building and to build a new building in the same spot which would better serve the clubrooms and diverse extracurricular classrooms. While it was also to secure more space and to improve the school’s aesthetic, this was pursued with a passion for the creation of a space of rest in which students would be able to escape from the stuffy atmosphere of a high school classroom and an open space for free leisure activities. 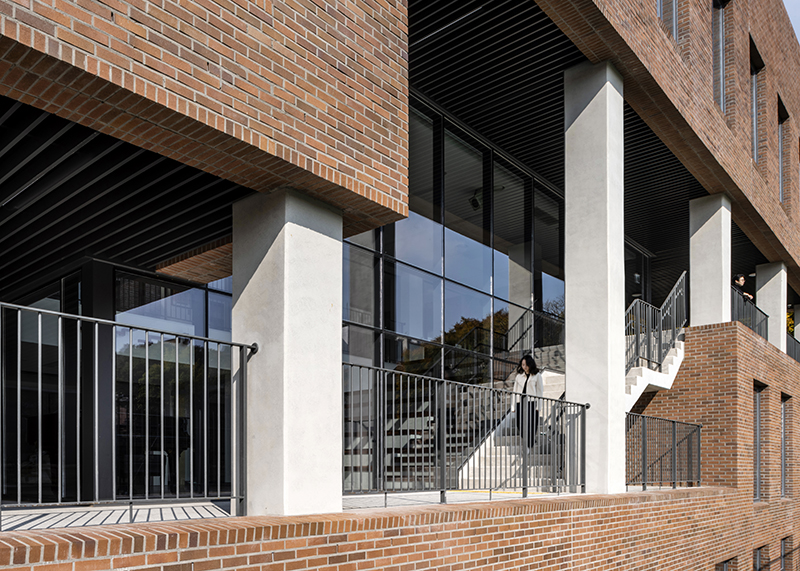 Demolishing Walls to Create an Open Space
Upon first visiting the site in the autumn of 2019, after receiving the commission for the project, the scenery that stood as backdrop to the schoolyard from the existing concrete building was extremely striking. The dense Hyehwa-dong residential area and the spacious gardens surrounded by the Sungshin campus of the Catholic University of Korea created a cozy and serene impression with its red- tinged trees. The condition of ‘facing the most beautiful scenery yet existing as the most closed concrete mass’, particularly when standing between many campus buildings, naturally established the problem as one to be resolved. The most important design objective was to create a leisure space which would secure a greater volume on the same spot with an open view towards the yard, as well as creating greater circulation from the main building to the schoolyard so that the new project would not become another obstacle.
Consecutive Voids, Connection Through Voids
The majority of Korean school architecture has been created through the standard drawings and specifications distributed nationally throughout the 1960s and 1970s. Single lots are composed of uniform plans made up of classrooms and lined corridors, simply stacked upon each other in closed plans with no voids. The only place from which it would be possible to see the sky and breathe in the fresh air – given these are the spaces of a school in which students spend all day – was the schoolyard. The attempt to create a freer space by dismantling these standard plans began by the bold decision to empty out the mass. By establishing dimensional circulation, proceeding from the second and third floors of the high school main building to the Venus Hall, and from the Venus Hall to the schoolyard, a horizontal void was created by emptying out the part in which this circulation would flow from within an oblong box form volume. The emptied out space was connected to each part of the Venus Hall, forming the path towards the schoolyard. While the Venus Hall would become a destination, it was more important that it could become a medium of communication or connection for students to naturally pass by, and to loiter as they pass to and fro. The uniform circulation system of the main building, composed only of classrooms and corridors, would become expansive and free as it passes into the Venus Hall. 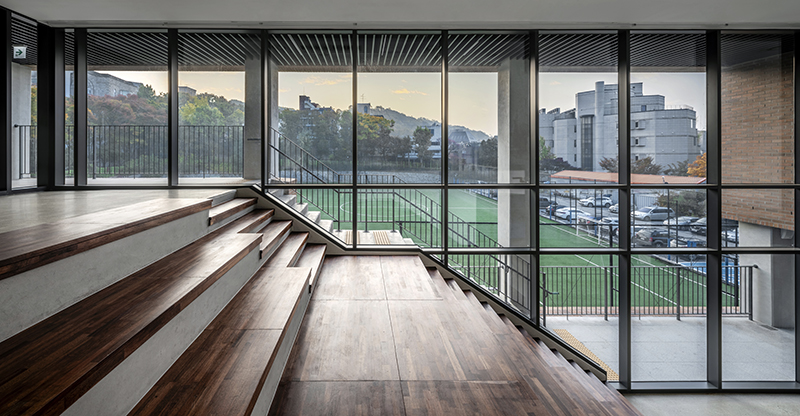 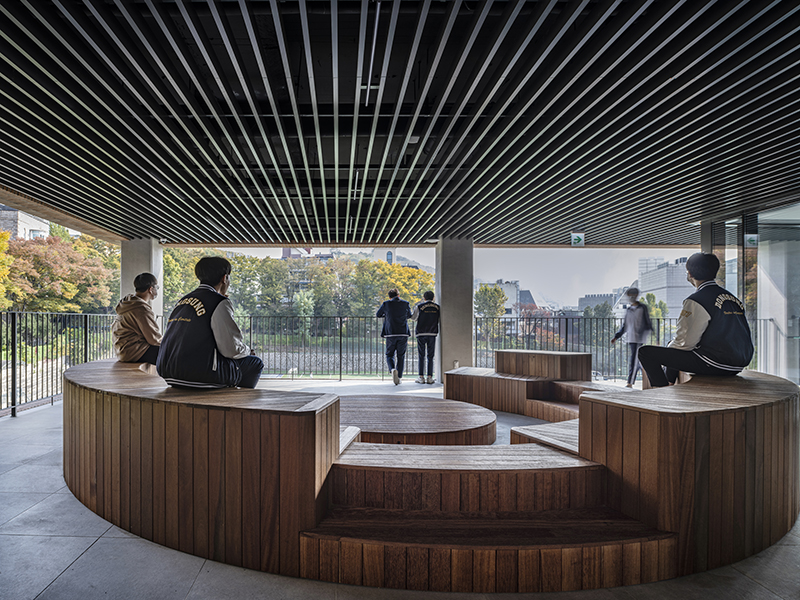 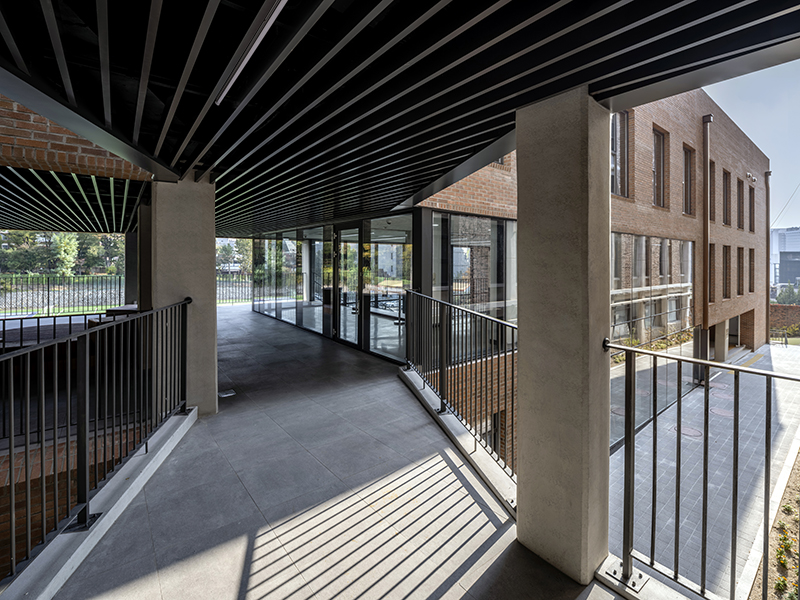 The Terrace and Multi-Function Lounge
The emptied space would not only become a space enabling easier flow but also an open space for unspecified acts. The terrace serves as a resting place for students to loiter during lunch time or, after school, as seating to watch football games taking place in the schoolyard, and an observation deck to view the scenery that opens out towards the schoolyard. Between the first floor and second floor terrace, a space wrapped within a light glass curtain wall called the multi- function lounge was created, as a place for diverse cultural events like small concerts or lectures. The stair-shaped space at the height of two levels extends its original form to the outside, becoming a stairway that connects to the first floor and second floor terrace and possessing an aspect entirely open towards the schoolyard. The multi-function lounge had not been included in the original scope of project by the school, and yet it became the most important cultural space in the Venus Hall created by sacrificing several clubrooms.
Vivid Scenery from Within a Crevice
The Daehak-ro district unit plans note that anything beyond a certain proportion of the façade should be made in red brick to create a certain continuity in the horizontal scenery. As all of the other buildings within the Dongsung Middle and High School campus are red brick, there was no hesitation in the selection of the façade material. The front of the building, as seen from the yard, appears to be a heavy box form with a mass split horizontally. We hoped that these split crevices, and the vivid scenes of students passing through the crevices, would be exposed to the outside so that they could become protagonists in this dramatic scenery. To emphasise the emptied-out cracks, the project needed to appear as heavy as possible, and it had to look simple so that it would not attract attention. The majority of schools in Korea have long horizontal windows with ledges above a certain height for safety reasons, as well as with light and ventilation. On the other hand, the Venus Hall was fitted with vertical long windows to emphasise the look of a weighty brick mass, arranged with matching repeating patterns on the width of the windows and the width of the walls between the windows. The 2.6m high windows which reach from the floor to the ceiling actually added to a sense of openness, adding an opportunity for the walls between the windows to be used in diverse ways. The back of the Venus Hall, at 4m away from the main building of the high school, is another crevice space. The valley, like the in between road of the existing building, was opened out through the first floor terrace and out to the schoolyard. A glimpse of the main building reflected like a mirror on the curtain wall creates the illusion of the space having expanded. Moreover, the red brick façade of the two buildings facing each other, with over 50 years difference, has become a space that alludes to the historical layers of Dongsung High School accumulated over more than a century. 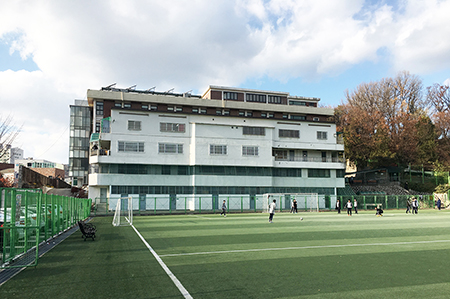 Before the construction of Venus Hall  ©Kim Jihoon​ 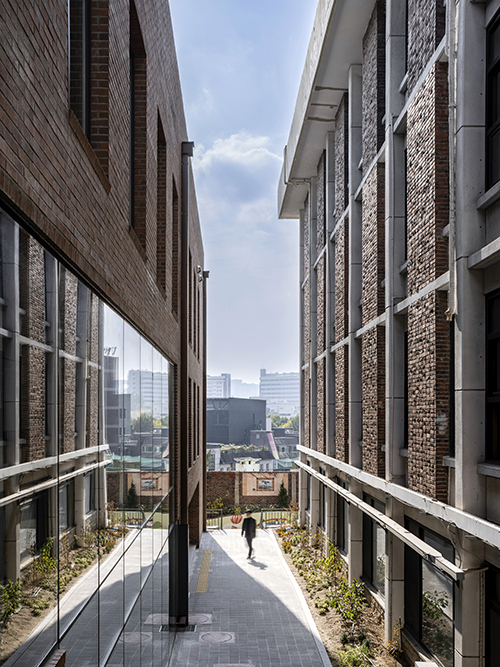