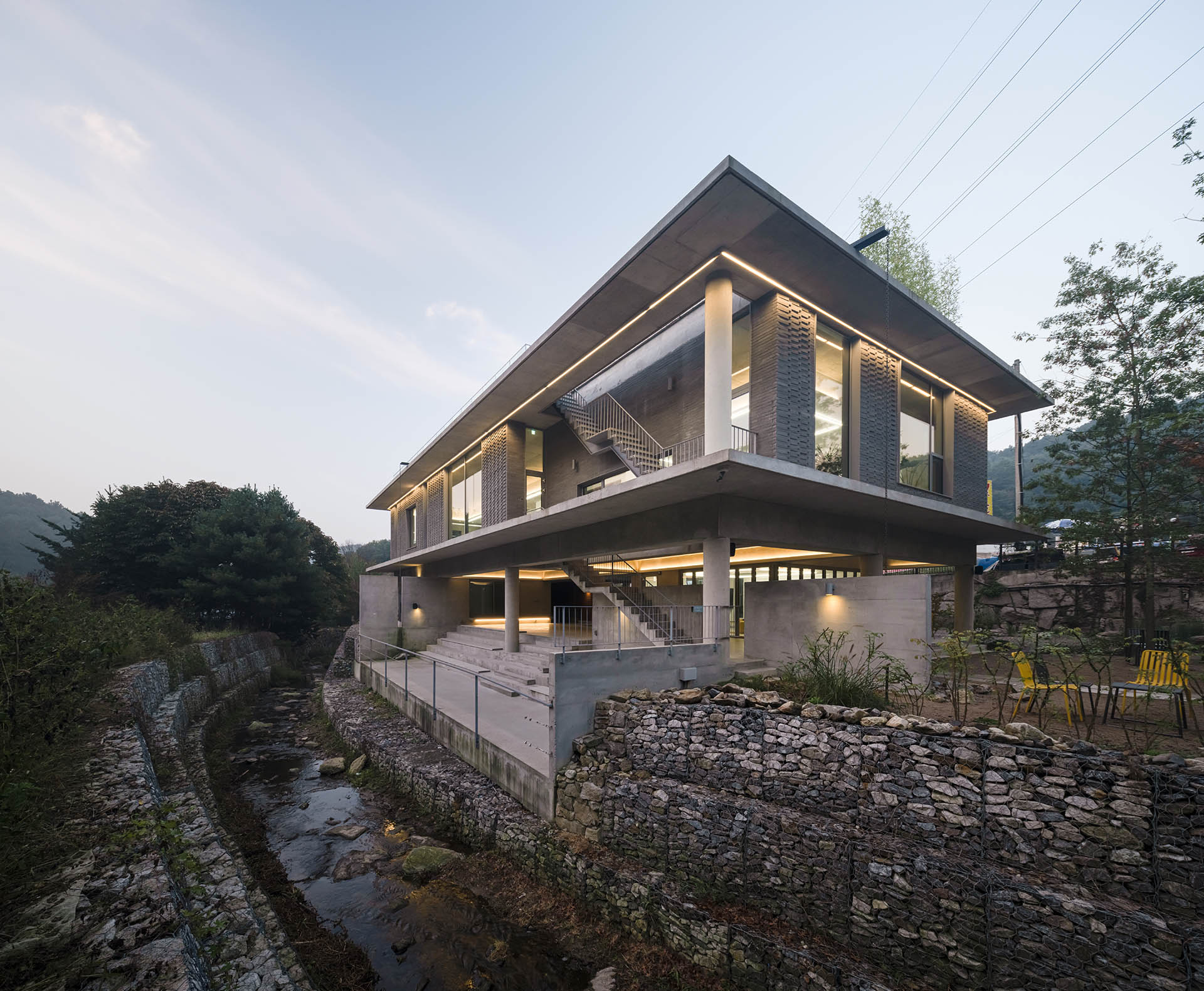 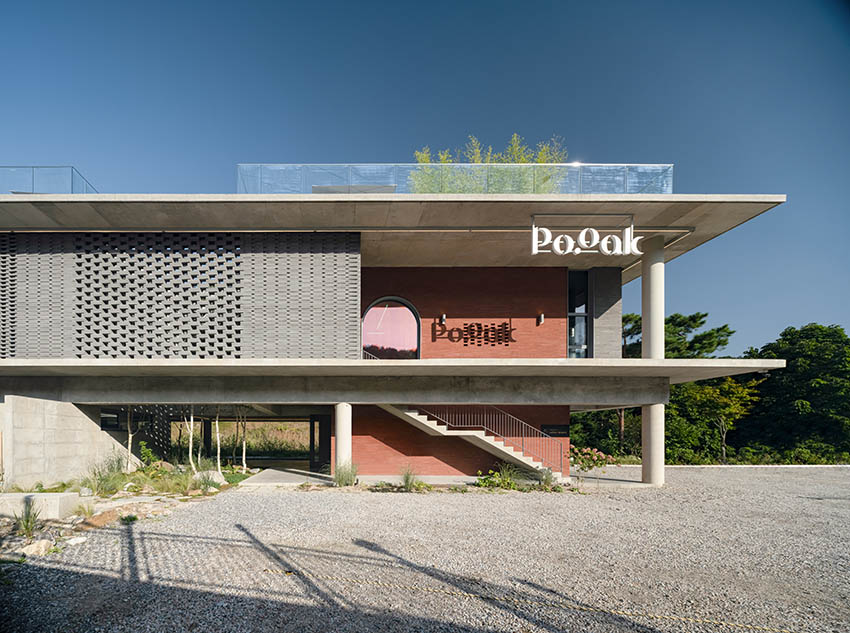 The site is located between the Gomori Reservoir and the Korea National Arboretum, the foremost tourist destinations in Pocheon, Gyeonggi-do. There are many cafés here, as many as one every 100m. Our task was to create the most impressive and memorable spaces between these nearby cafés. I had imagined a site open to the reservoir or next to a forest near the mountain, but it was not to be. The site was about 3m lower than its surroundings, and it was challenging to secure any recognition with every kind of restaurant crowding this area. The 3m retaining wall that can be seen from the site was made by pouring concrete randomly on the stone embankment. The only hopeful aspect was that there was a narrow stream running along the east of the site, with the mountains behind it. Even though the mountain has a transmission tower, it has been partially damaged by developers. 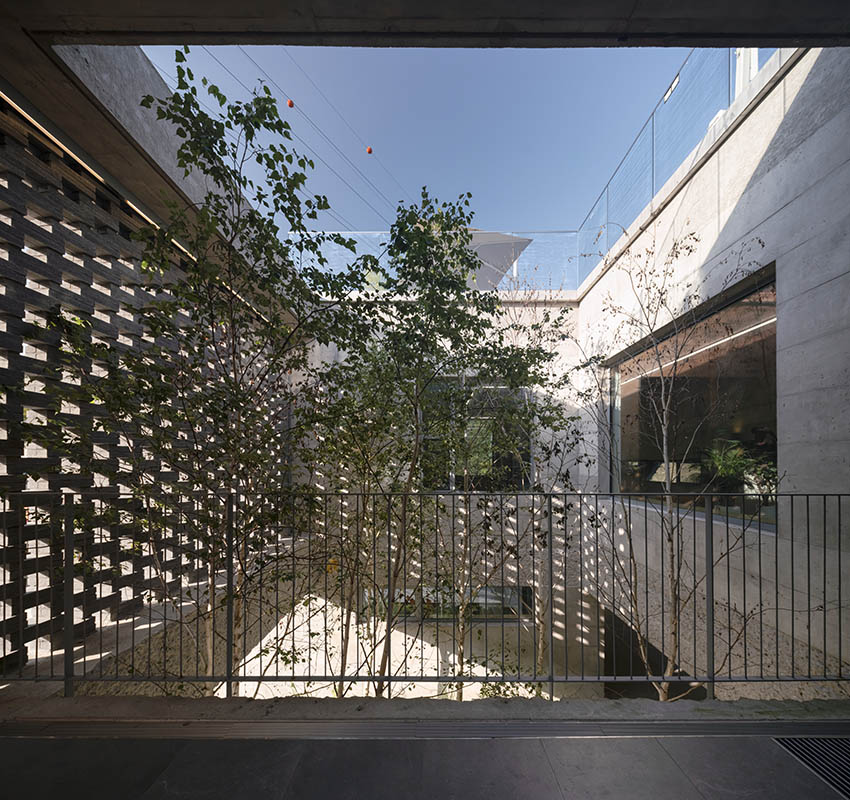 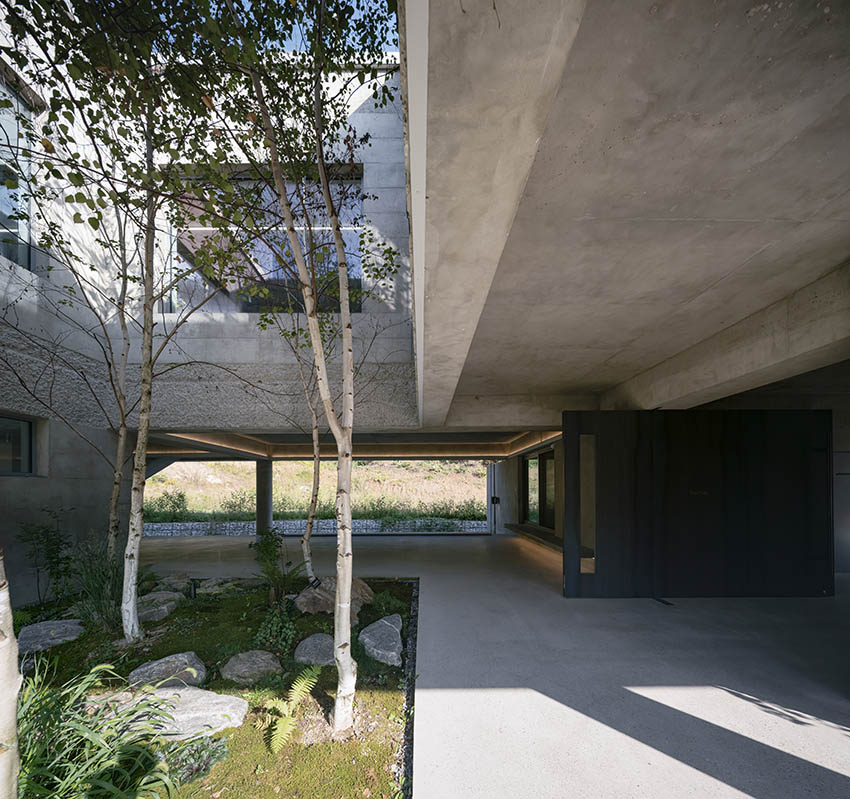 The Selective Adoption and Optimisation of Nature
First, we considered how best to enhance the natural elements while also obscuring the aspects that harm this natural panorama. The first solution was to raise the café and create a vast piloti external space on the first floor. In this way, even though the size of the garden on the site is relatively small, it could have become a wide outdoor rest area in connection with the piloti, and could also be connected to a space in which you can relax while listening to the sound of water by creating a terraced stand on the riverside. Thanks to the superstructure of the piloti, the nearby restaurants and the transmission tower would be out of sight. The second solution was to reorganise this somewhat messy landscape by introducing fake walls and extended slabs. The café on the second floor faces the mountain behind, and the extended floor slab serves to cover the lower part of the cut mountain. We thought that the fake wall could be a device to rouse curiosity for the landscape behind it by properly covering and opening it rather than seeking to conceal. The third was to create a background architecture. Concrete is the most basic and straightforward material. In the piloti space on the first floor, the floor, walls, and ceiling were all planned using exposed concrete, which made the garden and the mountain behind the site stand out even more. The mountain’s green, which was modestly covered by exposed concrete, was highlighted amongst the more monotonous and dry properties herein, and the middle of the concrete space would be improved. The café on the second floor also embraces the mountain scenery with its neat exposed concrete surface.
Sequences Configured Through Concealment
The site is hidden from the access road, and we wanted it to be an attraction that is well concealed rather than one which throws itself open. If one enters from the main road and turns a corner along the narrow road, the building catches one’s eye. It has two horizontal bands and a huge mass filled with bricks that floats in between, which has become a relatively closed elevation to obscure the view of the restaurants on the access road. However, we tried to excite further curiosity by allowing for glimmers of light and landscaping to be seen through small gaps inserted throughout. When one enters the building, one must enter the piloti on the first floor or go up to the café on the second floor. Entering the piloti space on the first floor, a massive door made of hot rolled steel plates partially blocks the appearance of the courtyard and slowly reveals it through the gaps. We described the space from this point into the garden as ‘hidden nature’. The courtyard, which is replete with birch trees, stones and moss, adds light and shadow to create a dramatic atmosphere with light and shadow. Facing the courtyard and turning to the right, a terraced stand is located, which forms a restful space devised using a giant concrete block. The narrow stream is somewhat insufficient in terms of its striking visual potential, but the sound of flowing water is pleasant. Entering the rear of the building through the piloti space, one discovers an oak garden. Although small, it is a circular trail and a place for rest immersed in nature. If you go back to the entrance and go up the stairs to the second floor, you will face the courtyard again. While this lower level emphasises encounters with moss and stones, the upper level is another landscape composed of the leaves and branches of trees. If one goes around the courtyard and opens a large iron door with a height of 3.2m, one will face the interior space of exposed concrete at a height of 4m. 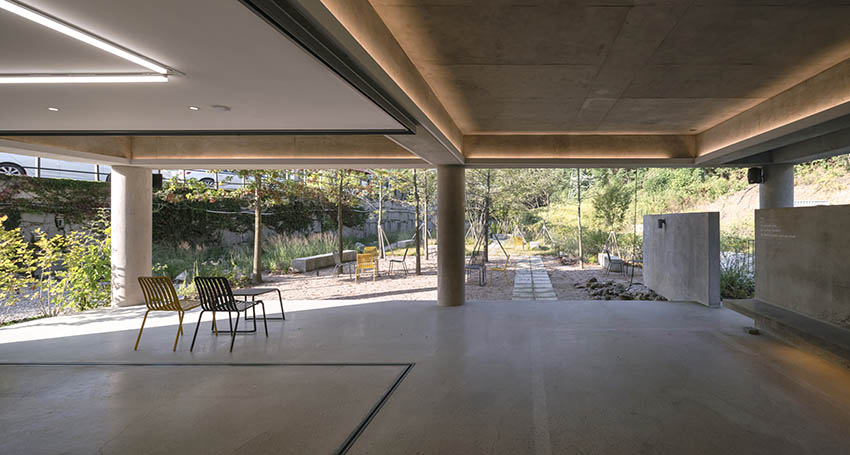 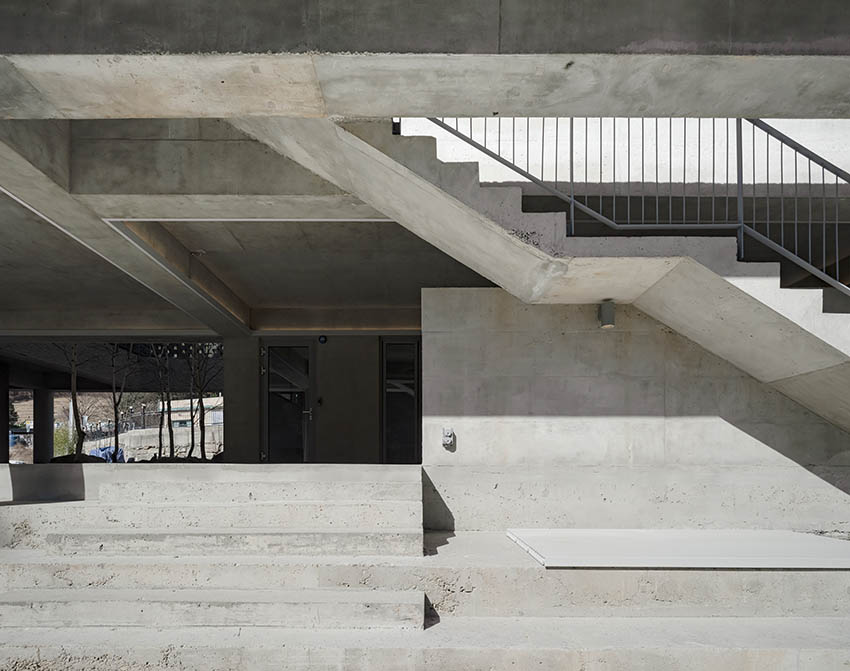 Floating Horizontal Bands
The exterior of the building is simple. As mentioned earlier, it was filled with brick between two horizontal bands and made to appear to float. The two horizontal bands were intended to be seen as extensions of the floor and ceiling surfaces on the second floor. The floor of second floor follows the general column-beam structure, but its roof structure is designed as an upper beam so that the ceiling surface appears to be extended to the outside. The two bands are the frame supporting this understated design. The space between the frames is composed of dark concrete bricks, and a pattern of shadows is created through various stacking methods. When facing a landscape covered from the inside, we stacked bricks diagonally and emptied some of them to filter into the landscape. We used plywood for the formwork of the exposed concrete, but only horizontal joints were left to insist upon its horizontality. It is common to divide plywood (2.4m × 1.2m) in half to use it, but by dividing it into three pieces, we created 400mm-spaced horizontal bands. A horizontal line repeating every 400mm became the baseline for our benches, windows and doors. The narrowed horizontal lines escaped the colossal concrete mass and felt like a stacked structure, giving a more precise and meticulous impression.
It was in the summer of 2018 when the owner couple first visited us. The duration of the project was delayed as the stream that had invaded the site boundaries was moved to its original location following receiving permission, and so construction was completed in 2021. This extra time was spent refining and developing the design. When I first met the owner, he said he wanted to build a café and present it to his wife, who has taken care of his mother for a long time. At that time, we were unknown architects without a fully completed project, and the only thing we could have faith in on a site whose strengths were not clear was to solve its issues architecturally. Nevertheless, it was transformed into a beautiful space with the support and boundless trust of the owner couple, as well as the help of various experts, including landscaping, signage, furniture, and construction companies. As with the café’s name, we hope this place will be remembered for many years to come as a place to luxuriate in a ‘Po.oak (big hug)’. 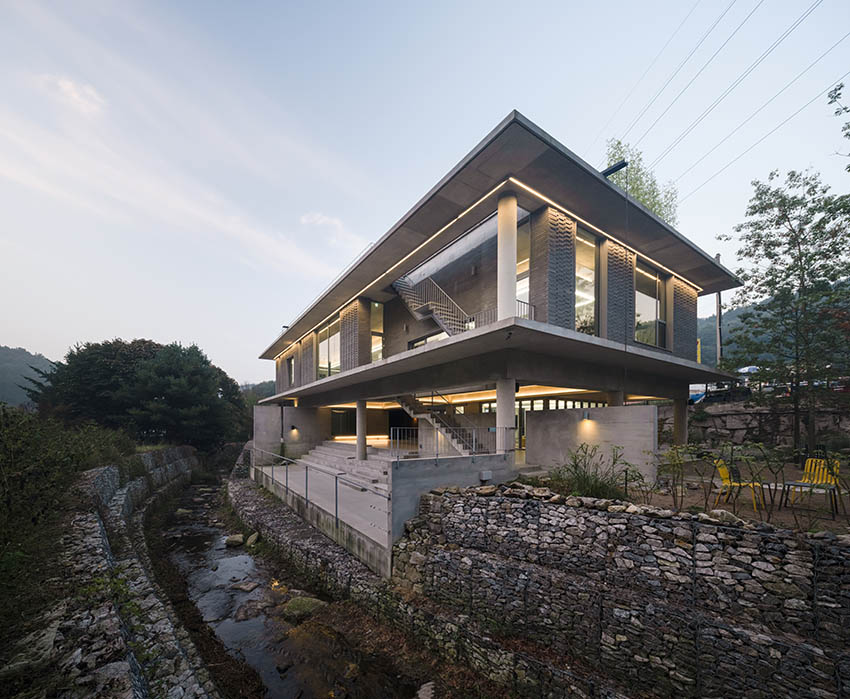 Kim Eunjin, Kim Sangeun
Kim Eunjin and Kim Sangeun are co-principals of SN Architecture. Working as public architects, they have conducted many projects related to Life Social Overhead Capital, and are designing their 8th daycare center due to their interest in children’s spaces. Their representative works are Buam Daycare Center, HaeAhJun, Inwang Guard Post Forest Retreat, Po.oak, among others. They have been awarded the up-and-coming architects of the 2019 Korean Architecture Awards, the grand prize for the 2021 Korean Remodeling Awards, the grand prize for the 2021 Korea Wood Design Award and the KIA Award 2021.
No.653 April 2022 architecture cafe PO.OAK Pocheon SN Architecture Kim Eunjin Kim Sangeun
LIST
bookmark_border
favorite_border
2