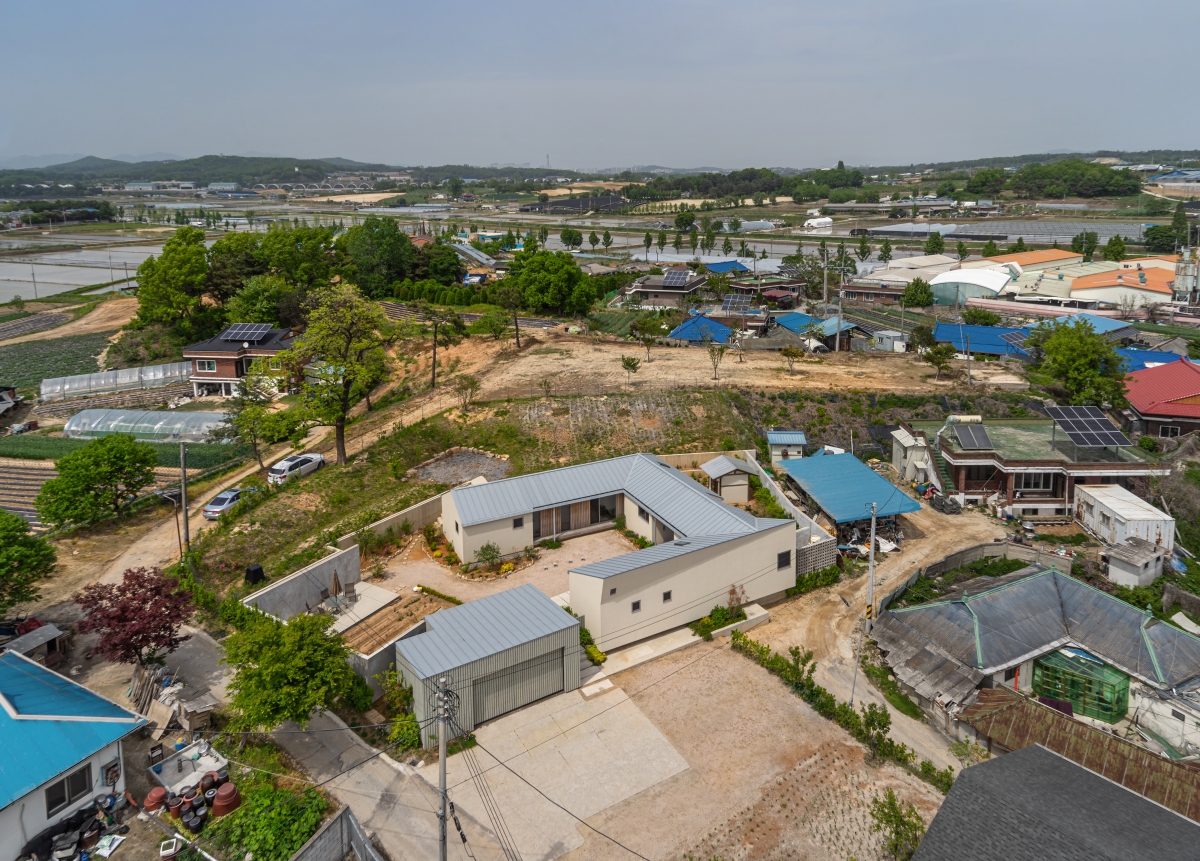 A house with memories of the town and family​

Contemplation of Icheon Manwhajae began in spring 2017, when I received a mail from a client who was a professor facing retirement in two years’ time. Having lived away from home for 47 years since his graduation from college, his studies abroad, his professorship overseas, and his career at Handong Global University since his return to Korea, he planned to return to his hometown with his spouse. Naturally, I came to hear his memories of his hometown. With the newly-paved road as its boundary, the town was composed in a large triangular shape, and his previous home was located at the center of this triangle with a low hill at the background. The client narrated his memories of the oak tree hill that has now been repurposed as farmland, the reservoir, and the town landscape with its row of Himalayan cedars growing along the main road. The 200-year-old town building, which was also the largest building in the neighbourhood in terms of scale, was a very important site of memory for the client. He cautiously revealed his inner wish to restore the now-derelict town landscape and the aged town building. A project to revivify an old house, one that used to be occupied by many family members and neighbours, into a residential space for two people necessitates the bold process of exposing its inner workings. We sought to reenact the loose spatial structure of the old courtyard with low-density architecture and minimal installation while contemplating how it might best blend into the town landscape. In consideration of our budget, we concluded that the best approach in revitalising the 200-year-old building was by adapting it according to contemporary construction methods. The reception building that stretched in the east-west direction was disassembled as the wood had decomposed beyond recovery, and in its place a study of two small rooms and a parking lot were formed, with the main entrance as the border. With its wooden surface, the garage was distinguished from the stucco finishes of the main building and the study building. The hybrid character of the house, from its layout to its details, was pursued not only as a practical solution but also as a means of distinguishing the building from the wider social fabric. 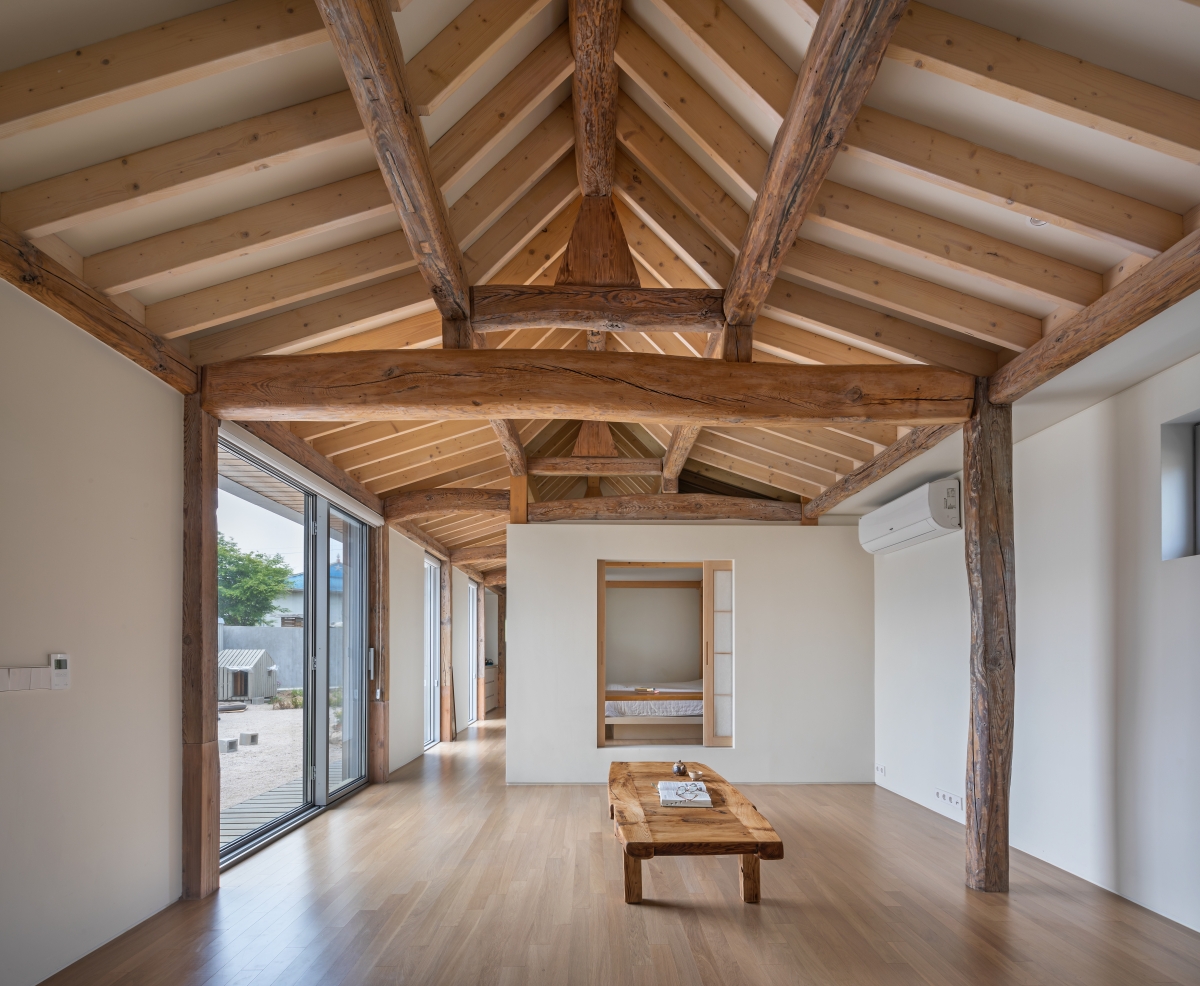 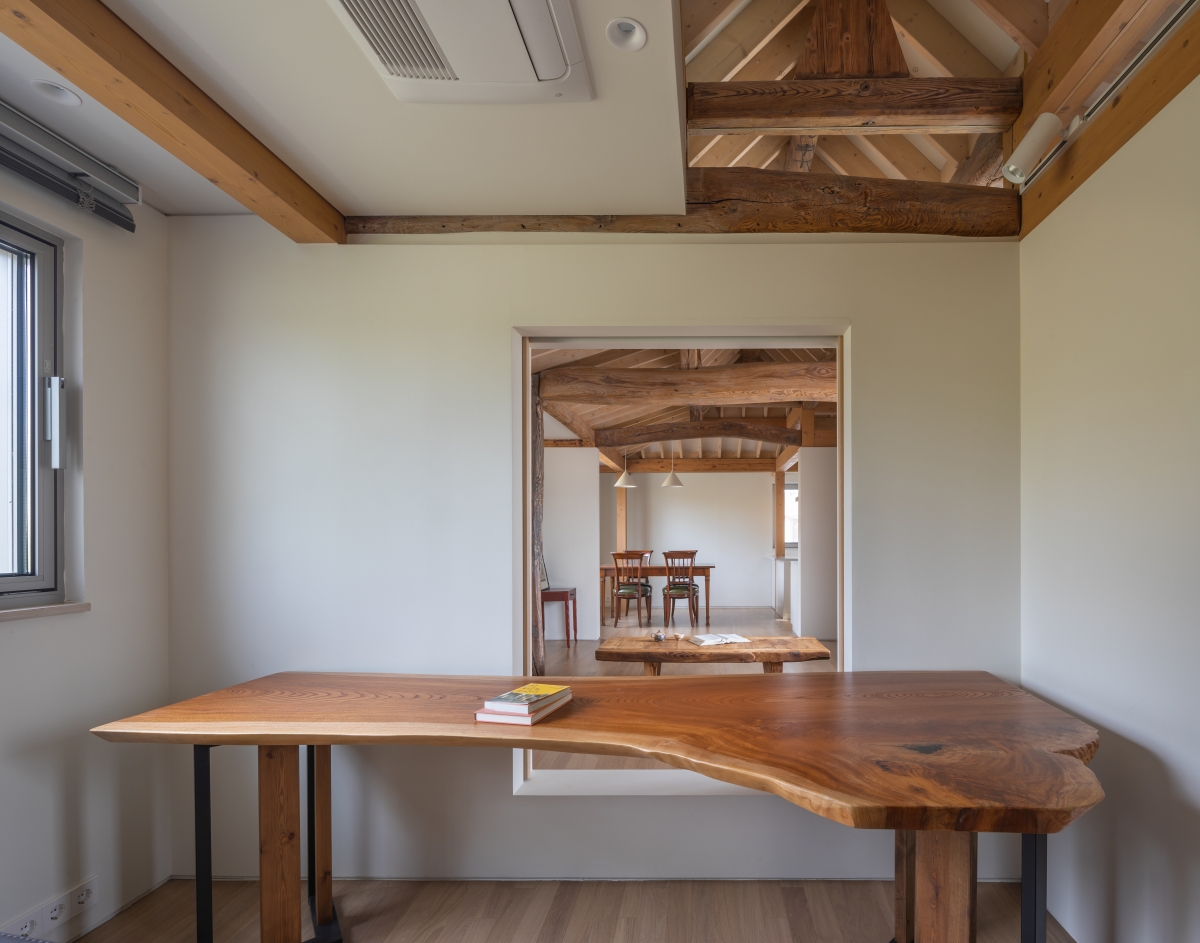 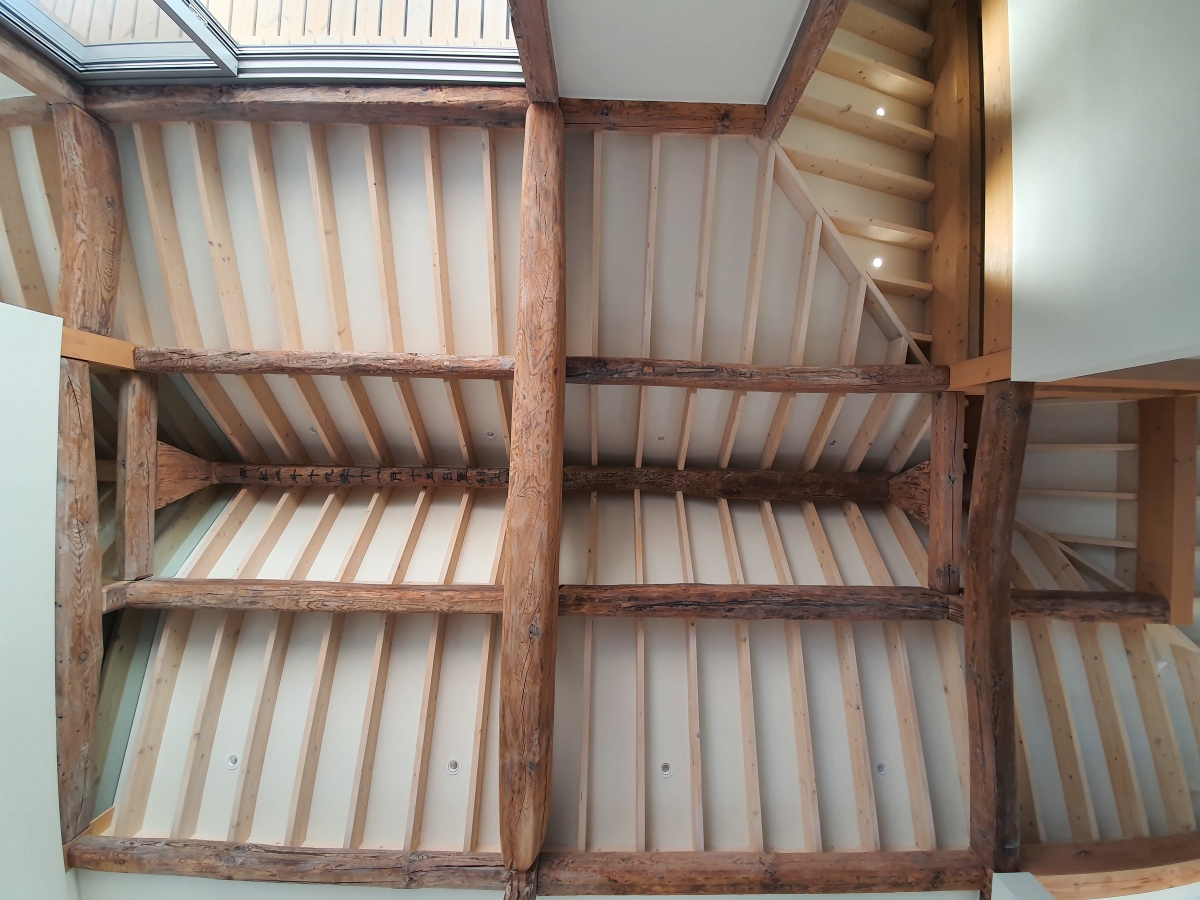 Contemporary Revitalisation of a 200-Year-Old Hanok

While we could not be sure of the exact construction date as the Sangryangmun was missing, the main building was nonetheless estimated to be more than 200-years-old according to the client’s analysis. While the module of a hanok is generally irregular, there is a strict regularity in the column module of the Icheon Manhwajae main building. This is also the case for the module of House of Chusa (Chusa Gotaek) at Yesan- gun, and it is assumed that this formalisation was influenced by Neo-Confucianism in the late Joseon Dynasty. The house reflects its class well, one that embodies its owner’s philosophy. Due to a lack of maintenance over a prolonged period, a large proportion of the rafters seemed beyond repair or restoration. By testing, we found out that only 40% of the original materials used in the columns and beams was reusable. We suggested to the client a somewhat multi-perspectival proposal that would set economical feasibility and value within the context of conservation and restoration of an old hanok into consideration. The combination of addressing the outer layer through contemporary construction methods and attending to the columns and beams of the hanok that could be restored, the house could develop a typos of its own. After adding serial numbers to each of the members after dismantling the main building, so that we could remember their exact positions, we tried to resituate them in spots as close as possible to their original positions while adding connecting parts wherever necessary to patch over the damage. The irrecoverable columns and beams were replaced with glulam, and a light-frame construction system cladding was applied to the outer layer. The boundary between the two methods was set through the exposed rafters of the interior, and the ambiguous connection between these and the irregularly-formed beams was mediated by a beam plate. (written by Cho Namho / edited by Bang Yukyung) 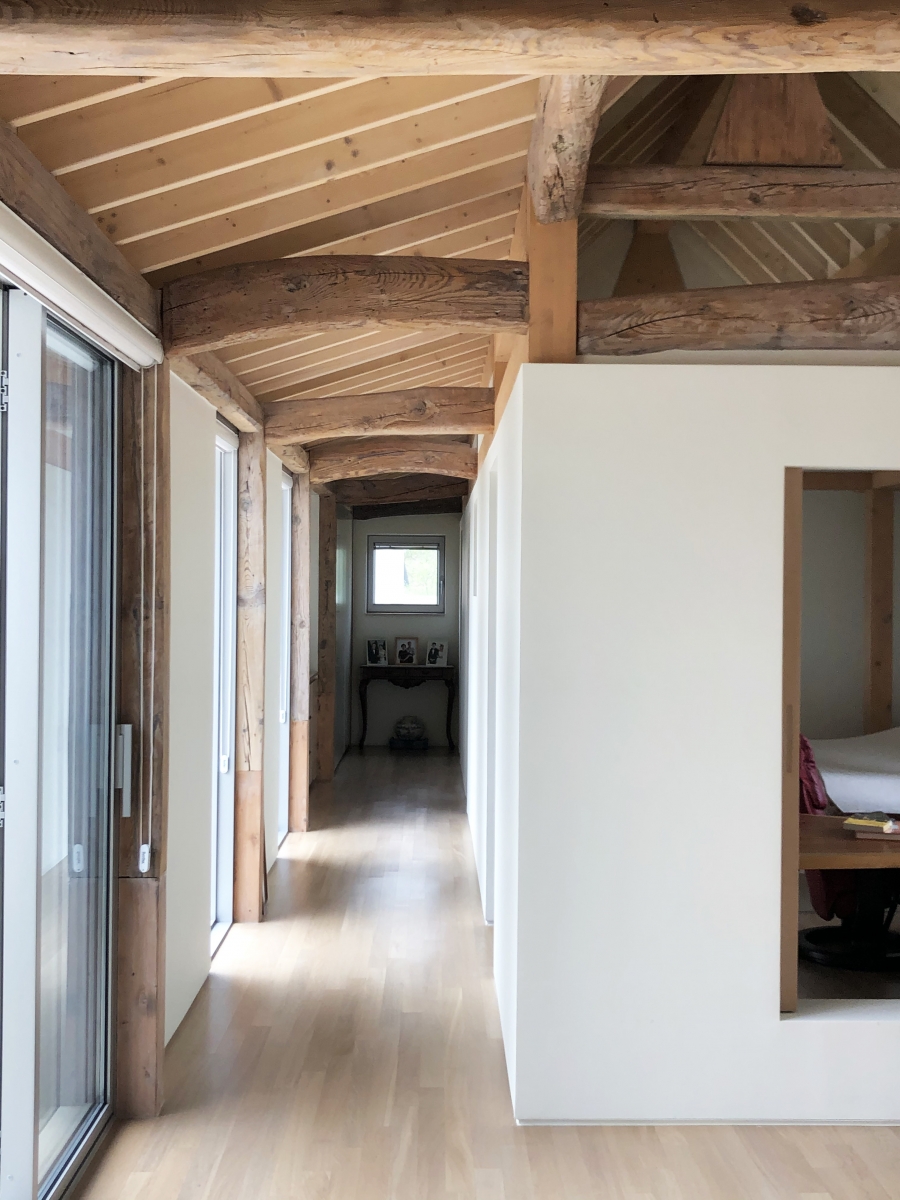 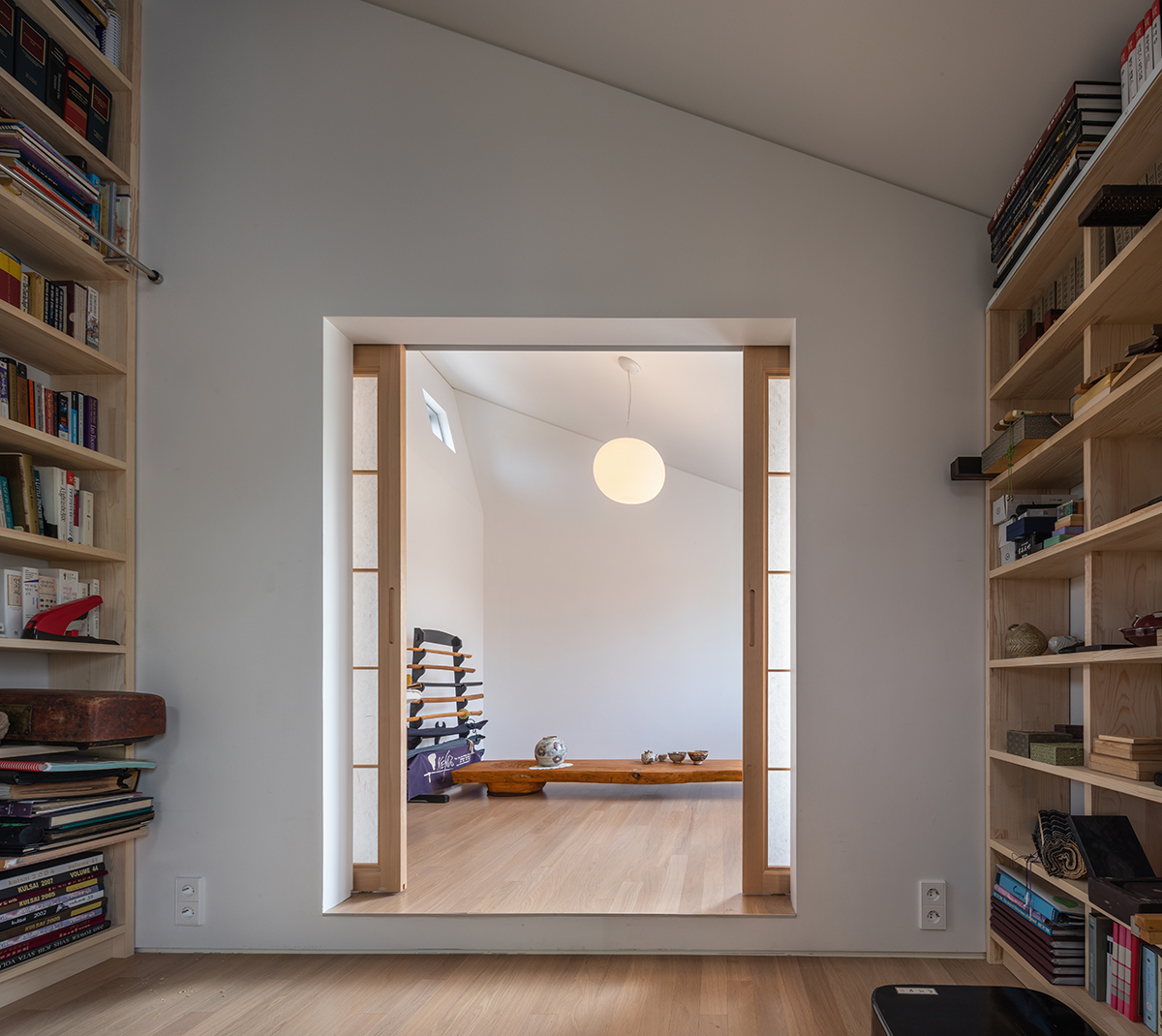 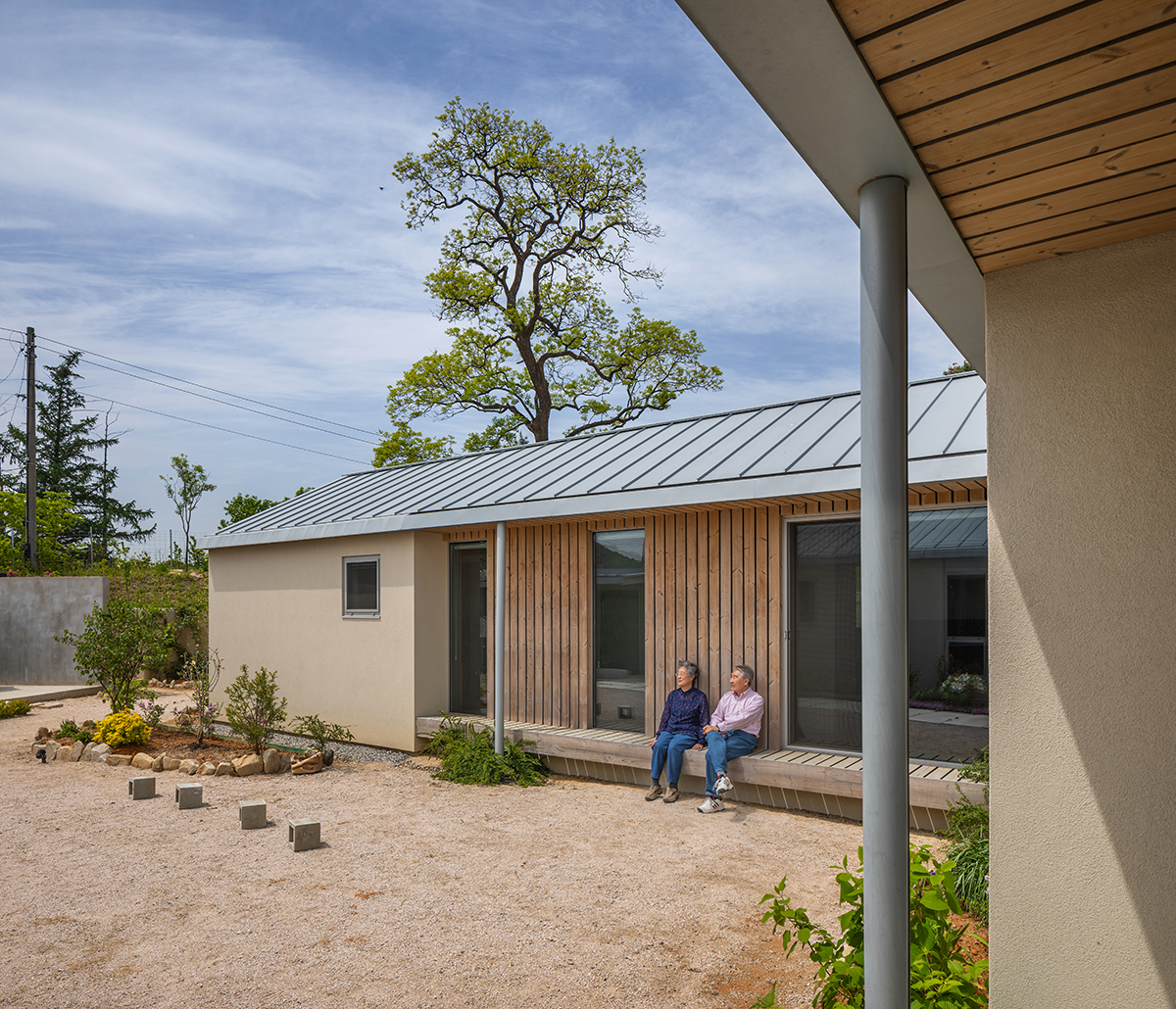 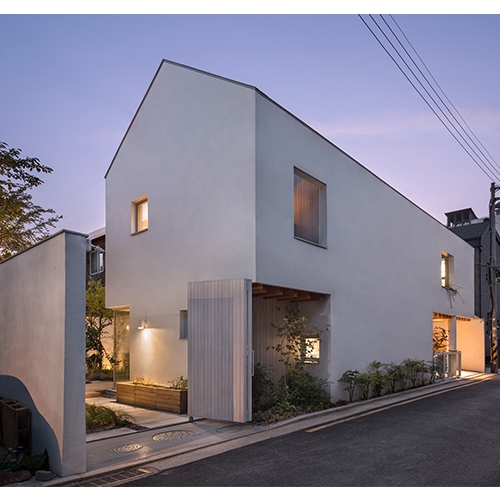