The gesture of hanging fabric, curtains or drapes has long held special significance. It highlights one’s status or honours a space through the act of enveloping or shrouding, and it also raises the expectations of an observer concerning the area or object covered by a curtain. In this project, the curtain, represented by the envelope is a figurative device as well as a tool through which to distinguish the building from its surrounding atmosphere. By capturing the ever-changing nature of light and ways in which the space shifts accordingly, the gentle curves of the glass grant the building to its own particular character. When covering the building with this curtain, its height was raised by three-stories towards the 10m-wide road, by one-story when facing the 6m-wide road, and by two-stories at the sliced corner. The various levels of this curtain, hiding or exposing the interior, were determined based on the size of the nearby buildings.

In much the same way La Chiesa di San Carlo alle Quattro Fontane in Rome, designed by Francesco Borromini provides meaningful respite in an urban context through its sculptures and fountains, buildings on the Myeongdong intersection, known for its high land prices, wield new promise in their provision of places of rest for citizens. Located at the junction between Myeongdong 8ga-gil and Myeongdong 10-gil, this building was appointed for expansion and renovation in 2018. At that time, the client wanted to increase the influx of people and to provide financial information and various services by creating a building that would manifest a corporate identity at the centre of the commercial district. Located at the corner of the street, the main entrance to the building is surrounded by concave glass walls and mirror-finished ceilings, which also features landscaping and benches, staging a living room in the city in which people pause and take a rest at any time. Another entrance has been inserted into the two glass boxes, and this mass takes the shape of an independent volume due to the continuous mullions at the corners, the curved elevations on the upper reaches, and the way in which the shapes are segmented and treated. 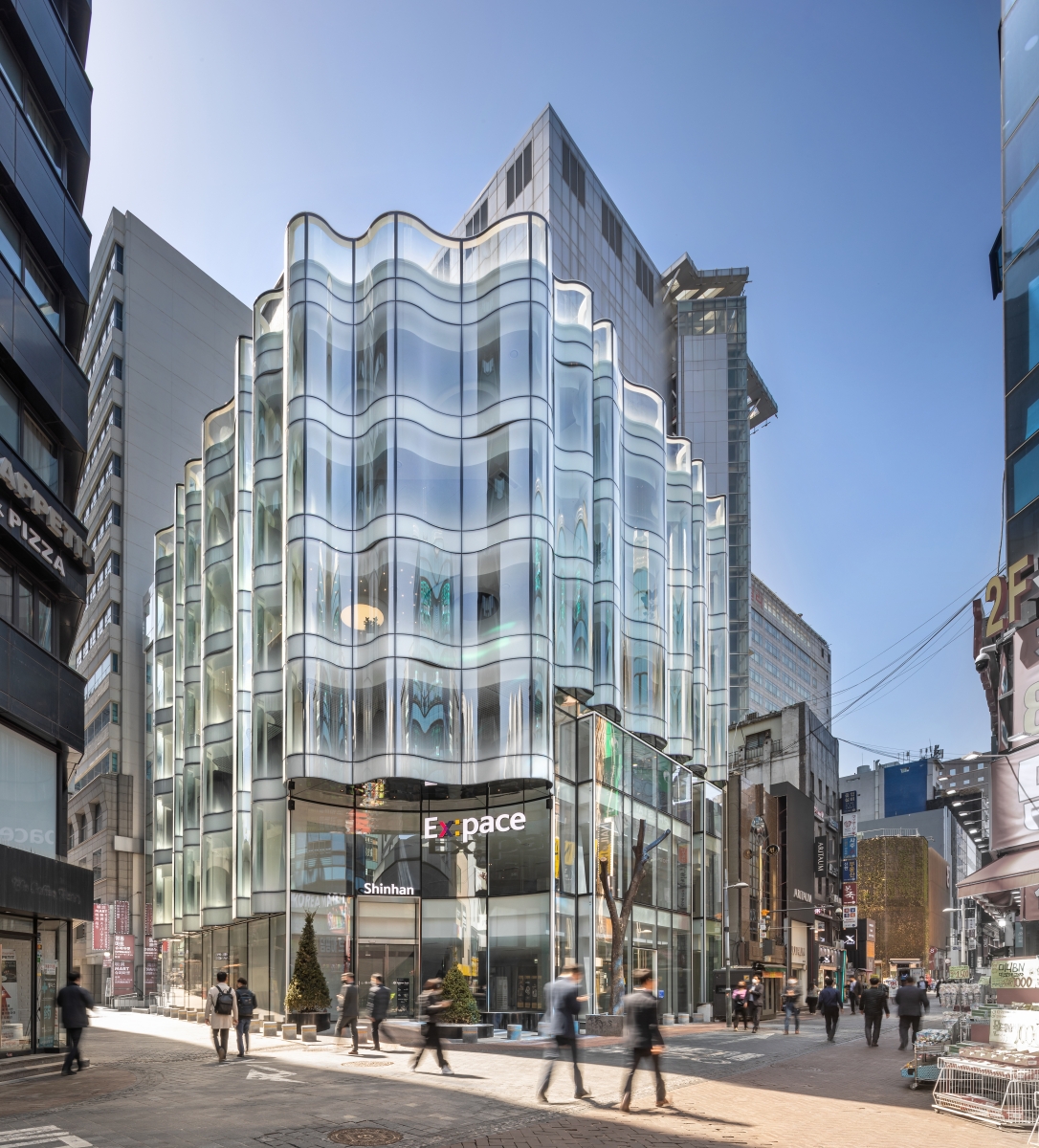 When designing corrugated elevations, we paid attention to the ways in which curtains and cotton fabric sway, and to the soft and warm texture of the fabric. Rather than adopting a kinetic façade, which changes its shape as a part of the fluctuation in elevation, this revealed a ‘controlled complexity’ by capturing the beauty of the fabric at the moment of movement. This controlled complexity creates a building of intricate images by repeatedly installing modules composed of several curved types, but this also prompts the observer to remember the subject as a metaphor and a symbol rather than as a specific form. This façade, which is perceived as a shape that constantly changes while walking along the street, is coated with ceramic dot frits that gradually change in diameter. Dot frits shield the interior and exterior of the building and also add a texture like a soft cotton cloth casting light and shadow on a solid, cold glass surface. 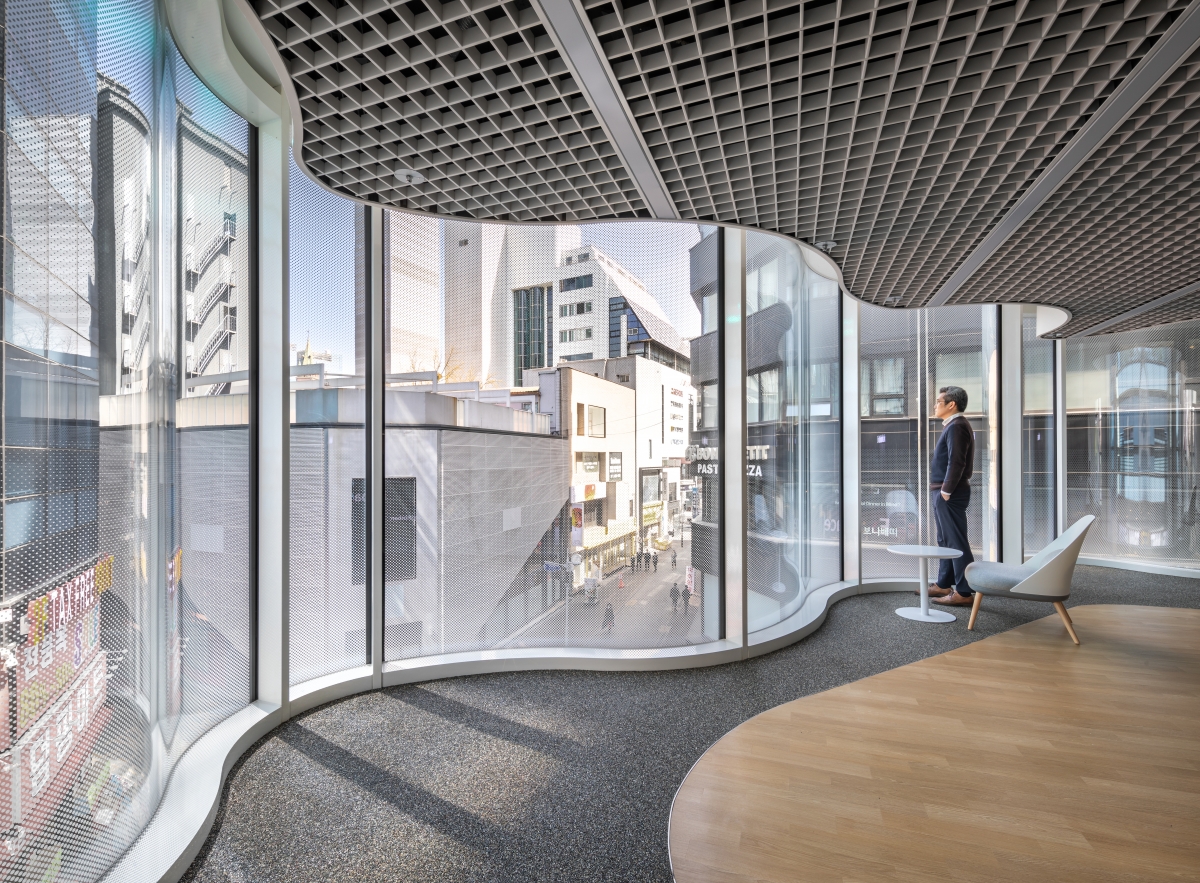 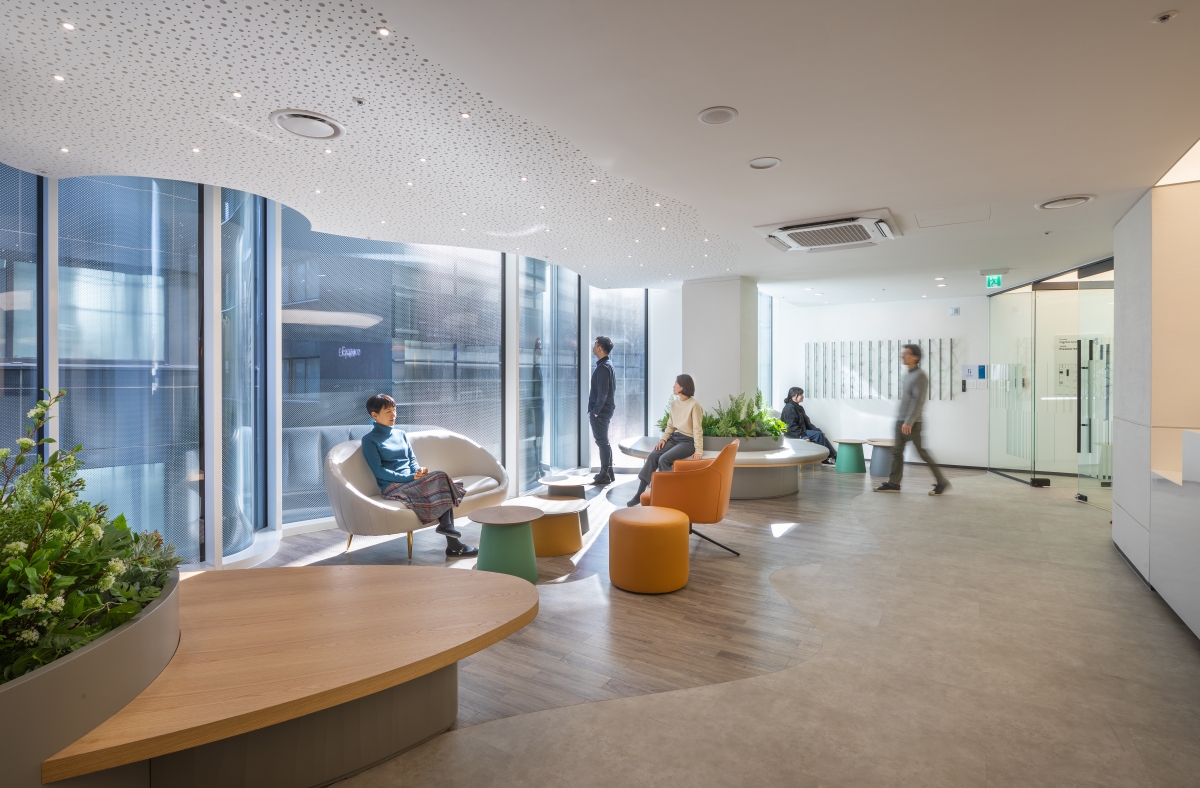 The façade of the building, composed of a 41.52mm-thick insulating structure, possesses multiple layers, such as double glazing and argon gas, Low-E coating to block radiant heat, and dot frits for shading. After undergoing mock-up tests including reflection values and projection, a glass curtain of various layers was manufactured and constructed of 320 curved-glass modules of 14 types. For modules and mullions, a dual clamp method that binds the parts together with those made using 3D printing was employed, and for transoms as horizontal members, which bear the weight of curved members, introduced a built-up method that assembles a CNC-processed steel plates by welding. Also, in order to best exhibit the neat and clean curved surfaces, all the structures that support the elevations were designed in a hidden bar type, and the space between glasses has been filled with caulking. The curtain wall frame that supports the two-dimensional curved glass modules is made of high-strength steel so as to reduce the cross-sectional dimensions of each member as much as possible, and the steel mullions that are 45mm-wide and of 150mm-length are manufactured by bending due to the nature of materials that are difficult to extrude. However, it was not easy to implement gentle waving glass elevations in reality. The steel formwork was manufactured to improve the accuracy of connecting the curtain wall frame to the framework, but there were cases in which they exceeded permissable error. Although it took a lot of effort, the construction proceeded by reworking the pre-fabricated double-steel brackets and putting two structural elements together. Before initiating construction at the site in Myeongdong, we developed a two-story-high 1:1 mock-up model and conducted performance tests on the structural stability, airtightness, and watertightness against wind loads. 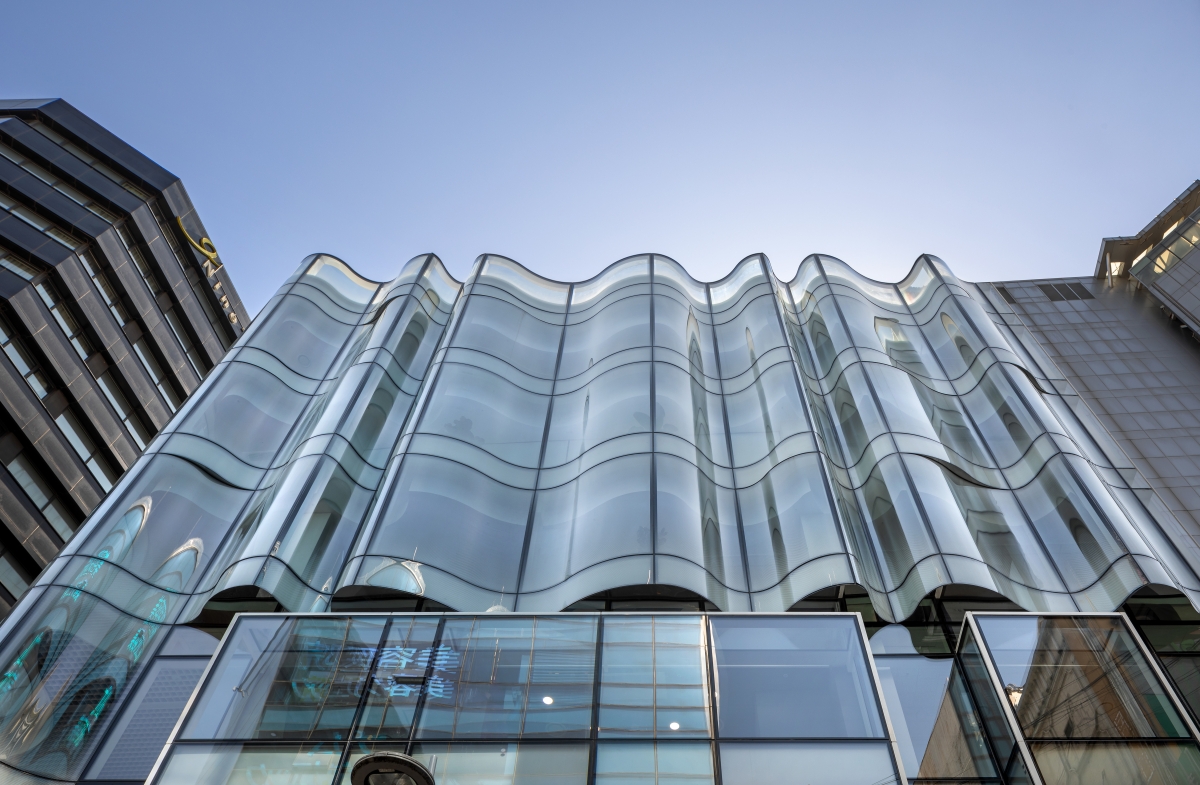 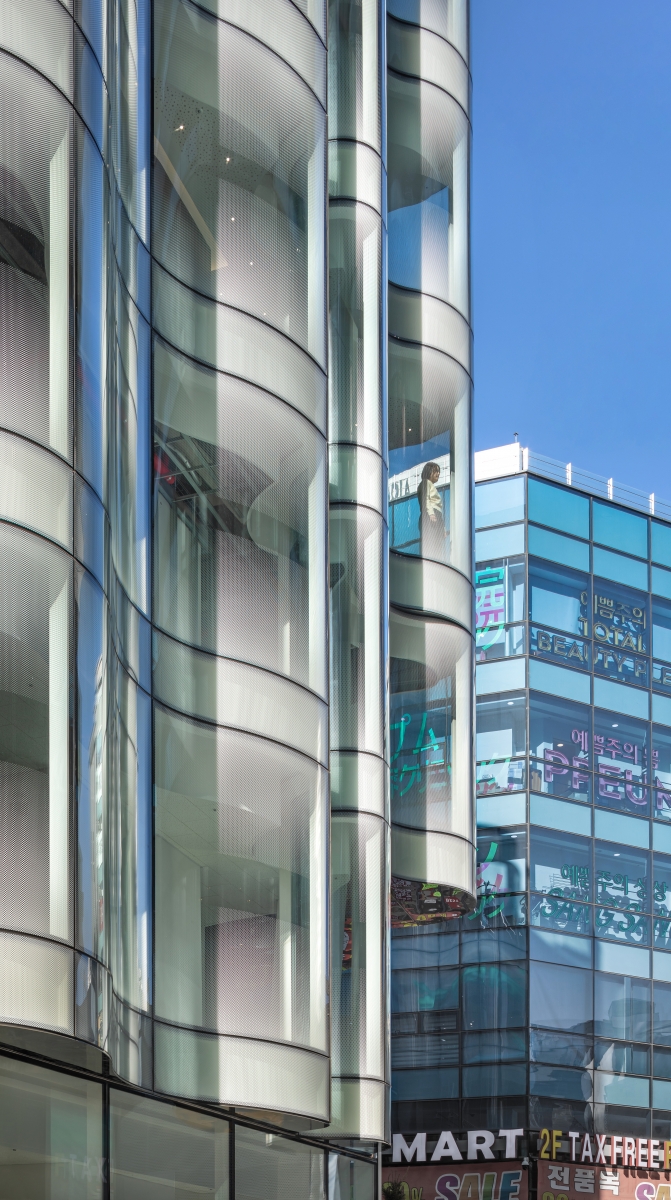 If you look up at the glass module from beneath, you can find a cross-section that has not yet been seen in elevations. The super mirrored stainless steel that is the finish on the bottom of the module reveals surfaces with reflective properties and devises variation across the building’s exterior. When modules of the same curvature are vertically interlocked, this material creates shallow shadows of different widths of modules within a depth of 15cm. The length of the transom that supports the elevation also changes accordinglye to 50mm or 100mm. The super mirrored stainless steel is exposed in larger areas at the corner of the building. It is attached under the canopy of the main entrance, which shows a wavelength of up to 76cm-wide, and this reflective material creates an elegant ceiling of the space for a public contribution.

When we first designed the elevation, the landscape lighting was designed to be different from the common night view of the commercial districts nearby. During the process of designing impressions and scenes that would be distinct from those of the surrounding buildings, we paid considerable attention to not only the pedestrians but also the users of the building. A light source was installed at the bottom of the spandrel to stage the light to appear as if it spreading upward along the glass surface. This method of construction reduces glare, preventing pedestrians and occupants from directly facing the light sources. For easy replacement and maintenance of lighting, a curved steel tray and slit are placed at the bottom of the spandrel. If you look closely at the glass surface, there are white dot frits attached to it, and these dot frits create a gradation effect that spreads light out from the lower part of the spandrel.​ (written by Kang Seunghyun, Kim Kijun / edited by Kim Yeram)