A Home for Hometown ‘Returners’

Hometown: A House and Gallery Devoted to Literature

Nowadays, many plan for their retirement and later years. Some of us plan to turn back to our personal history and spend the rest of our lives in our hometown. This house project began when the owner’s family, whose livelihood is based in Ulsan, decided to return to the husband’s hometown. They wanted to contribute to the local community by conducting meaningful activities as they return and nest in their new home in the old town.

Nevertheless, the owner, who is used to living in the city, felt that country life had become unfamiliar. Above all, he was anxious about the safety of his family. He prioritized the privacy of the structure at the beginning of the project, which would not allow passers-by an easy glimpse inside or the possibility of entering the house. The owner’s wife, on the other hand, enjoys socializing and would love to be able to invite people over for dinner. The owner dedicates his leisure time to writing poetry, and he needs his own space to invite literary friends over for discussion. If the house is no longer in use, he wants to convert the house into the gallery for literature as a cultural facility. He wanted the house to be a closed yet open structure, which would serve as a rural haven but also a centre for literature in which he and his friends could spend time together. 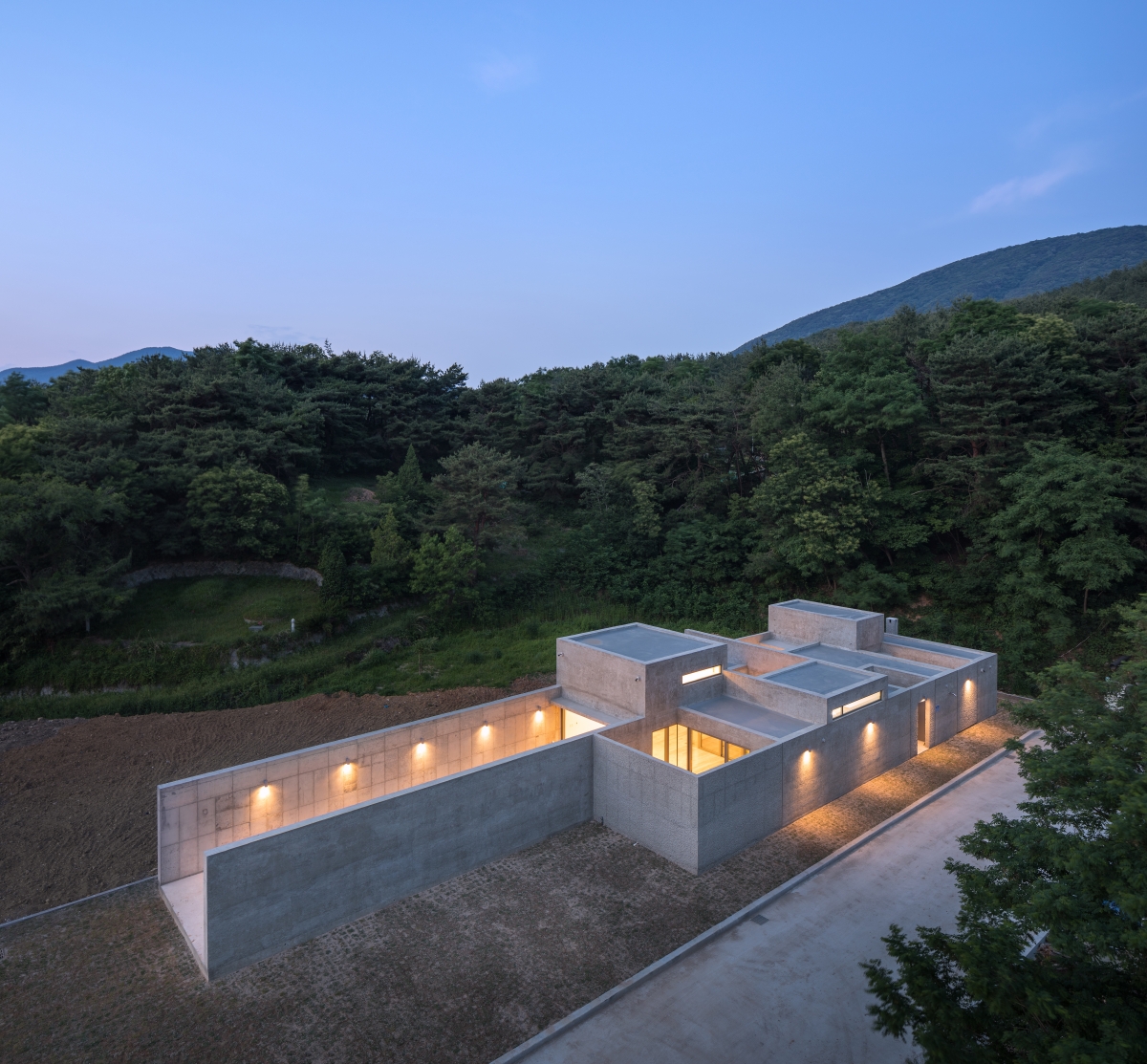 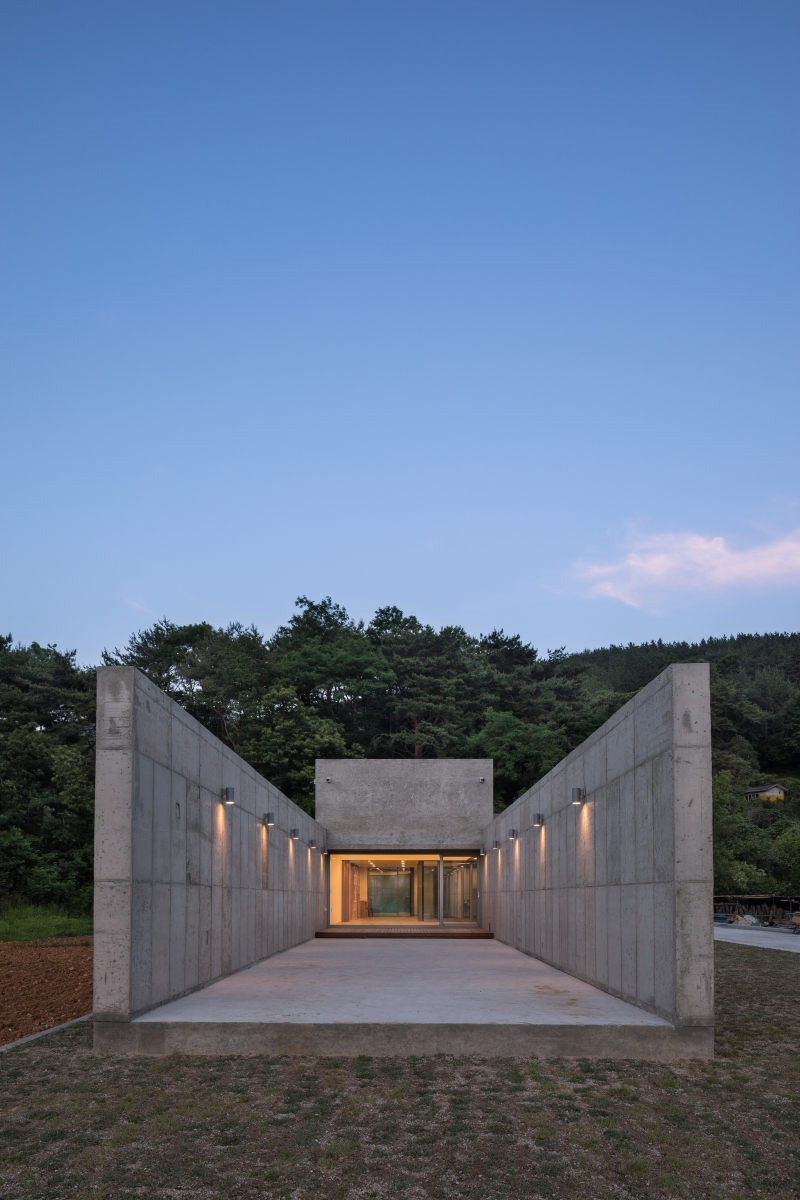 The owner almost gave up the project several times because of his safety concerns. As a consequence, the tight enclosure of the building was advised to address this issue. The land’s orientation wasn’t ideal, as there are high mountains to the East and the South and farmland to the West. Therefore, the house inevitably sits in a westerly direction. Reflecting upon the long aspect towards the West, the outdoor space is enclosed by 18m-long-walls. The space can be used for a party with house guests or as a venue for public events after it is converted into a literary center. It may be blocked from sight, hiding an open space inside to accommodate a handful of people. In any case, the high walls surrounding the outdoor space next to the kitchen have been designed to filter the sunlight from the West.

Upon entering the house, one senses an open space that is completely different from what one encounters outside the house. The rooms are not partitioned except for the bedroom. The only division is crafted by the outdoor spaces inserted in between. Behind the entrance, inside the living room, a fireplace is enclosed by the outdoor space (the red clay room). The shadow cast across the chipped wall guides visitors into the house. This interweaving of outdoor and indoor spaces is designed to encourage a crossing of sunlight above. Visitors can enjoy the bands of light and their changes throughout the day, at any place inside the house, and a long open interior space with several closed outdoor spaces juxtaposed, facing in one direction, contributes to this openness. The building does not have walls and columns to complete the space as a whole, which is supported by reversed beams. Rooms, however, are partitioned by collapsible walls if necessary, yet they are open to the closed outdoor space. The living room, kitchen and the bedroom have a high ceiling to maximize the feeling of openness, along with high windows so that mountains and the sky view are clearly seen from the inside. If the house lost the door to the bedroom, the interior space will be fully integrated and also include a hall to accommodate visitors when it is converted into the literary centre. 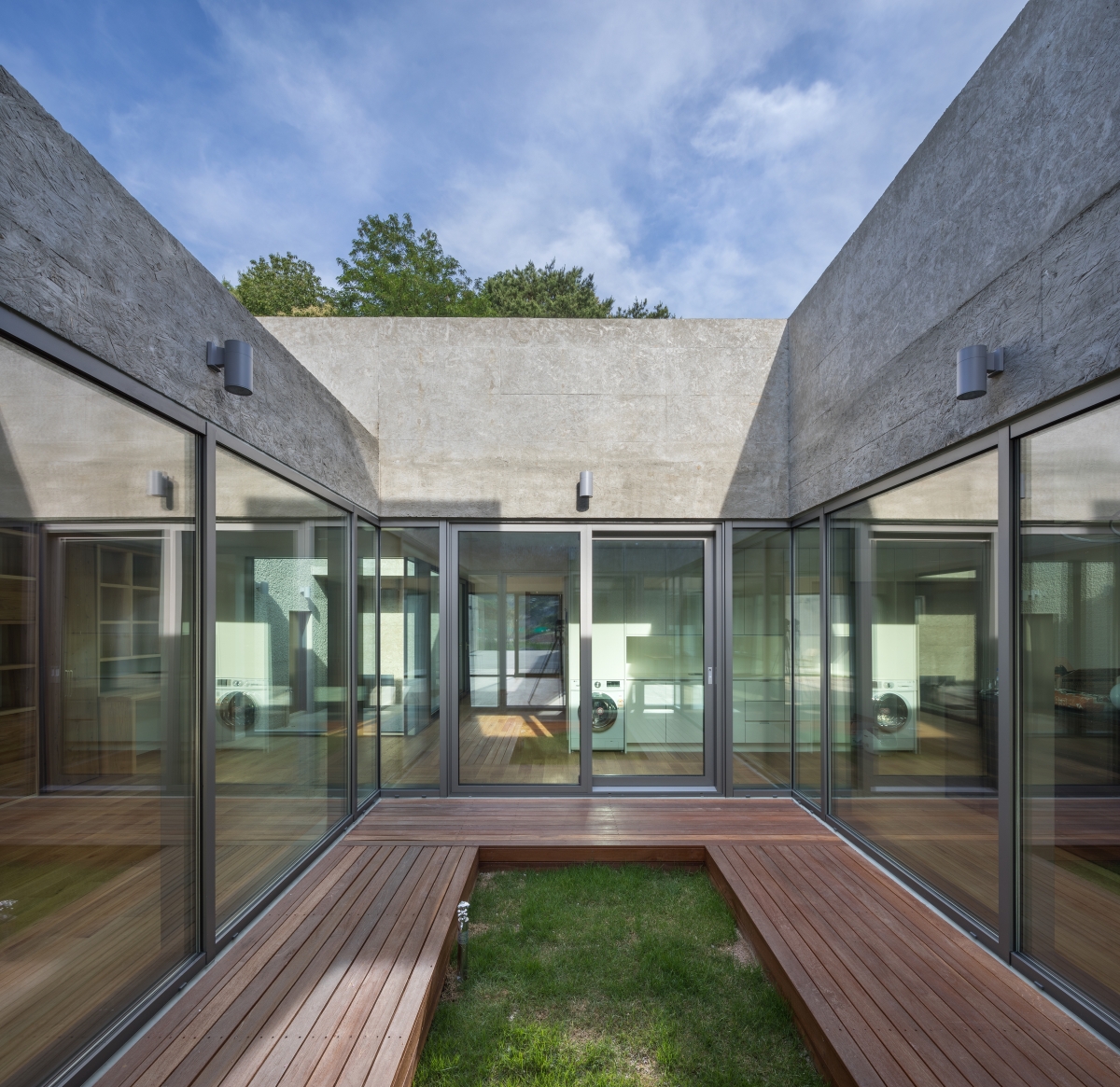 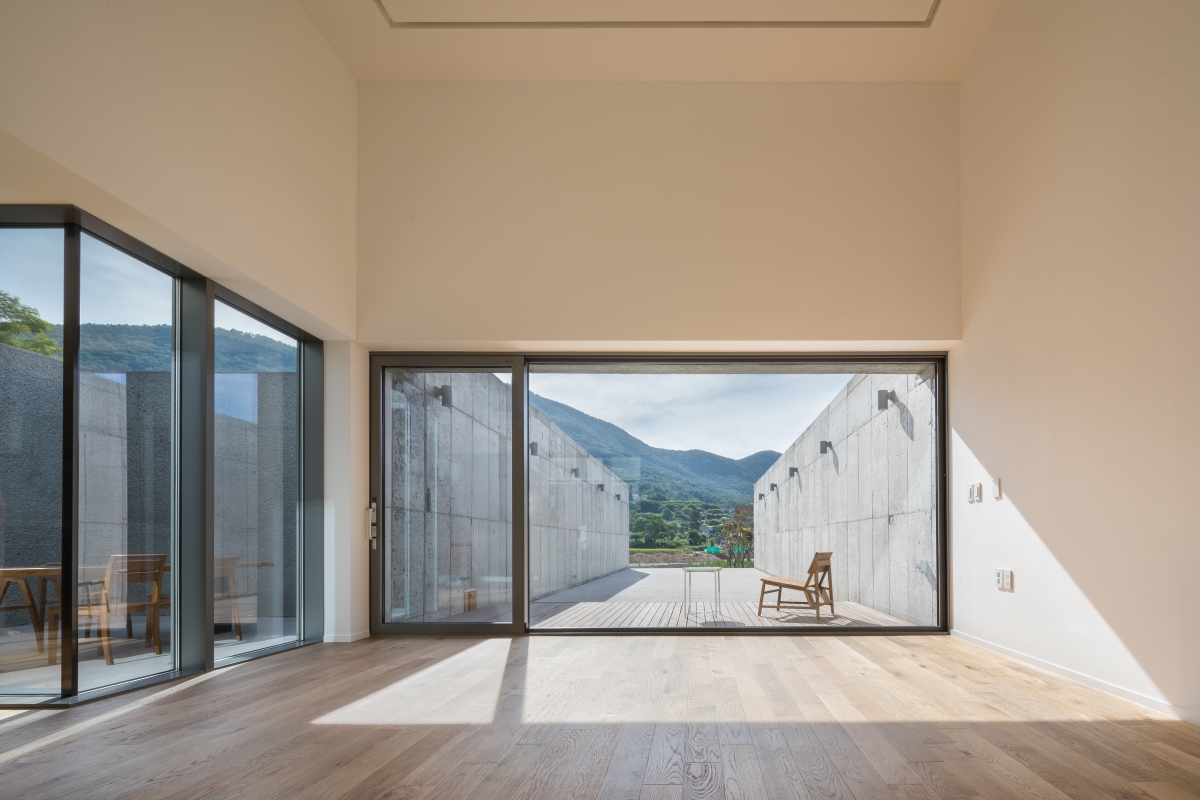 To reflect the farmlands and mountains near the site, create the impression of straw or bark on the concrete surface. Thus, the method conceived was to make the concrete surface appear more natural using OSB plywood. Due to the characteristics of this material, it swells off the surface once the wood chips are soaked in water. As such, OSB boards were attached to the concrete casts and left in the rain, as intended, to take the chips off the surface. The walls that make up the closed outdoor space are designed to look as rough as possible so that they reveal the changes and textures of light inside and outside.

The chipping method was therefore adopted. The methodology reveals the touch of the worker's hands, as even a slight slant in the work leaves traces of an oblique stroke. Therefore, the equipment was angled at 90° sharp to represent the rough texture of the surface just as it is in nature. The flooring of the outdoor spaces, where the fireplace (Agungi) is located, is in contrast to the chipped concrete wall, showing the different texture of light. To this end, small pebbles typically used for planting are used to fill the floor. 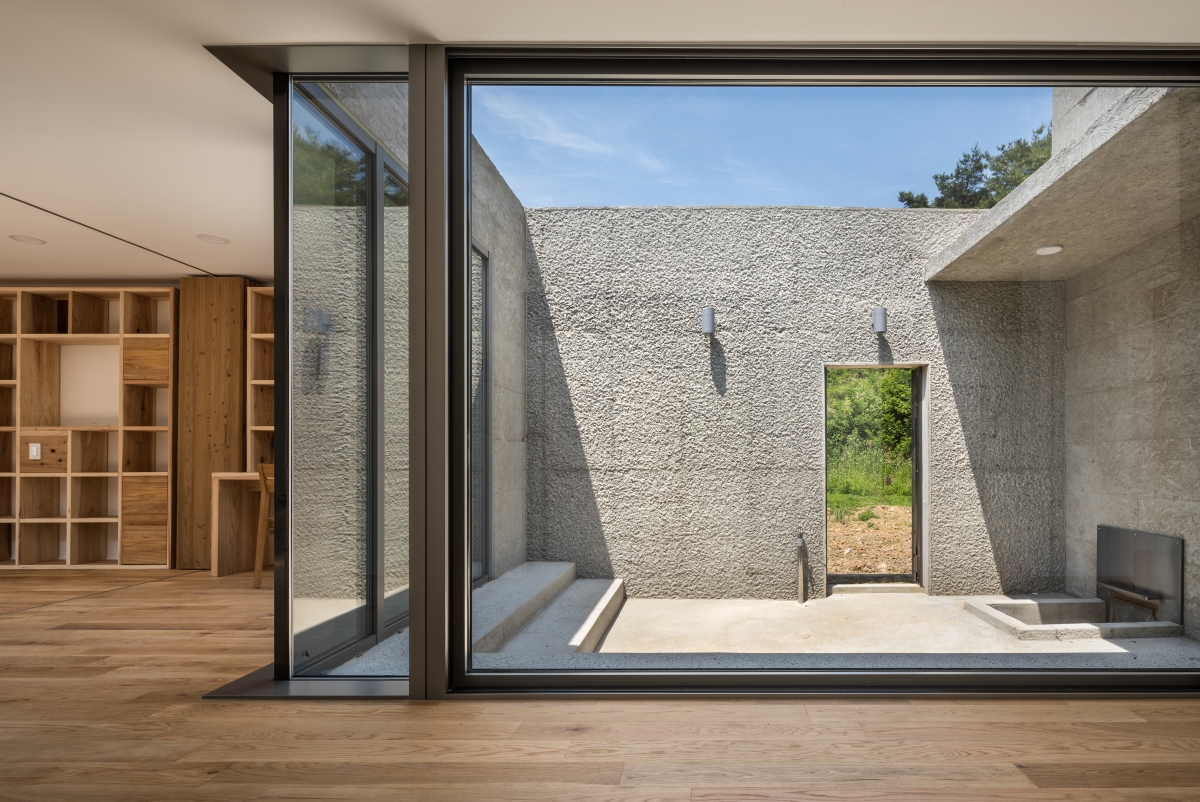 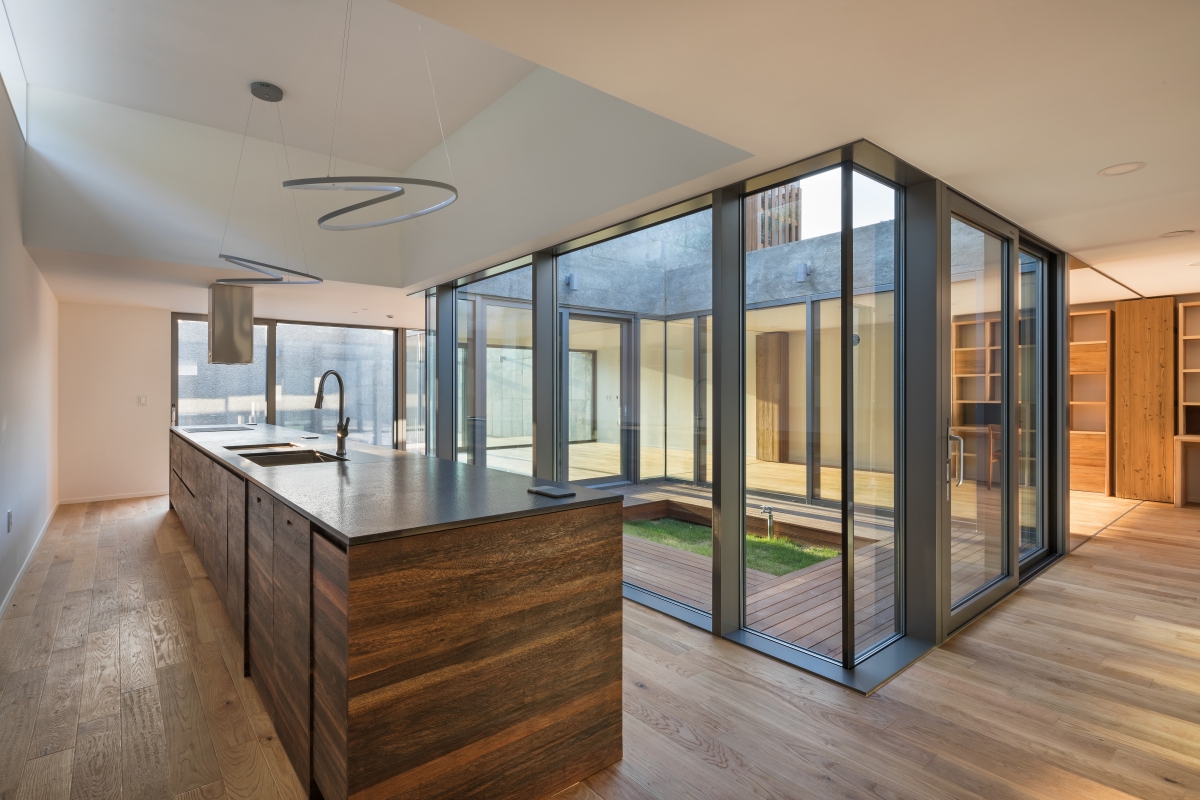 Many people do eventually come back to the city shortly after having migrated back to their hometown. This project has helped us question what makes returners go back to the city and what kind of space will improve the quality of their lives. I sincerely hope that the closed yet open house can help them sustain a lifeline in their hometowns.​

Jung Woongsik
Jung Woongsik graduated from Ulsan University and currently serves as a representative architect of On Architecture History Office and a professor at Ulsan University's Graduate School of Design and Building Convergence University. Through a search for the value and potential of local architecture, various models are presented and alternatives are proposed to establish relationships between people, people and regions. It has won a number of awards including the Korea Architects Association Award (2019), the Korea National Association of Architects Award (2016), the Korea Architecture and Culture Prize (2015), and the Ulsan Architecture Prize (2016.2017.2018).​
No.623 October 2019 architecture Close House Open House On architects Inc. Hometown House Gallery concrete
LIST
bookmark_border
favorite_border
26