The Architectural Universe for a Family in a New Town

Woojuwon, located in the Misa Gangbyeon Town in Hanam, is a commercial housing project for a family of three, a young couple with a daughter in preschool. Named by combining one syllable from the names of each family member, this house seems to have become the one and only universe for this family. It is built in a commercial housing block in a new housing site development district. While most residences expose only one façade, woojuwon reveals more than two sides along the edge of the block. This is because it stands at the corner at which two roads cross. The client asked me to plan a neighbourhood living facility on the first floor, residential units for rent throughout, and the client’s house on the upper floor.

Woojuwon takes the appearance of a mass derived from the site’s shape with an additional gable that can accommodate an attic. Meanwhile, part of the top floor is defined by a flat roof that is not affected by a slanting line that limits the building’s height in order to secure sufficient daylight. The complex mass required a certain order. We decided to create it by providing a new direction in a situation in which we could not divide the building into a recognisable form, or could not add a new mass. Steel plate was the right solution to this strategy. Bent Steel plate can enhance the verticality of a building as it has no vertical joints. The material was able to the solve complexity of a mass defined by the numerous angles that delineate the site. It can hide the outdoor fans of air conditioners as well as the pipes outside, and it rarely cracks which makes it easy to maintain the building. Passing the glass curtain wall on the first floor, the vertical patterning that begins on the second floor and extends to the end of the roof has slightly different widths. We designed this difference to express the depth of the changing shadows according to the direction of light. A criticism that is commonly leveled against bricks and stones is prompted by the selection of exterior materials. It seems to me like I would be imitating certain materials if I applied the language of masonry materials and piled them up one by one from the ground to the middle floors rather than to the first floor. I thought there was no justifying the use of decorative brick and stone material, except the first floor façade and the fourth floor terrace where I had to consider pedestrian eye level and the quality of life for the family. 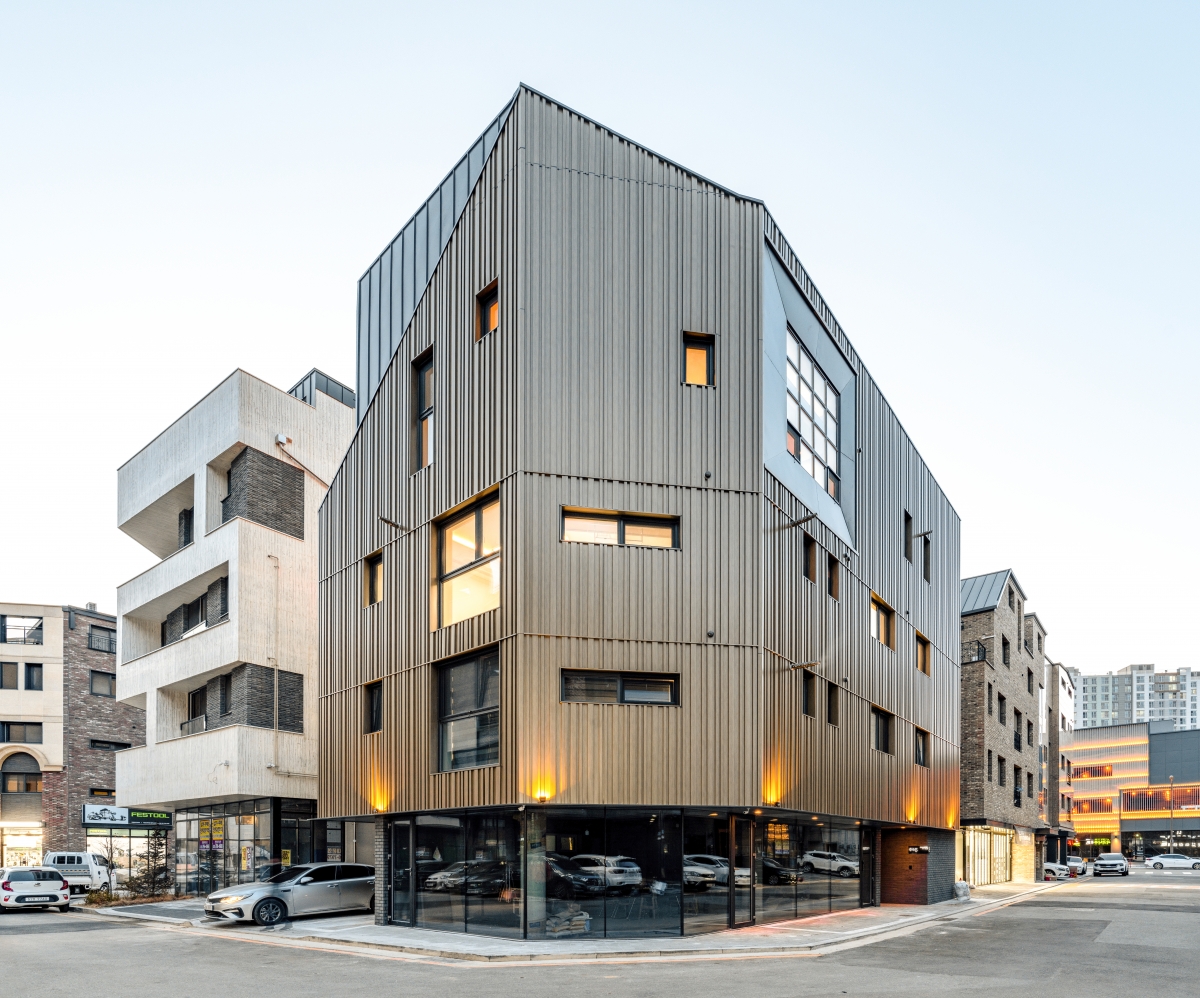 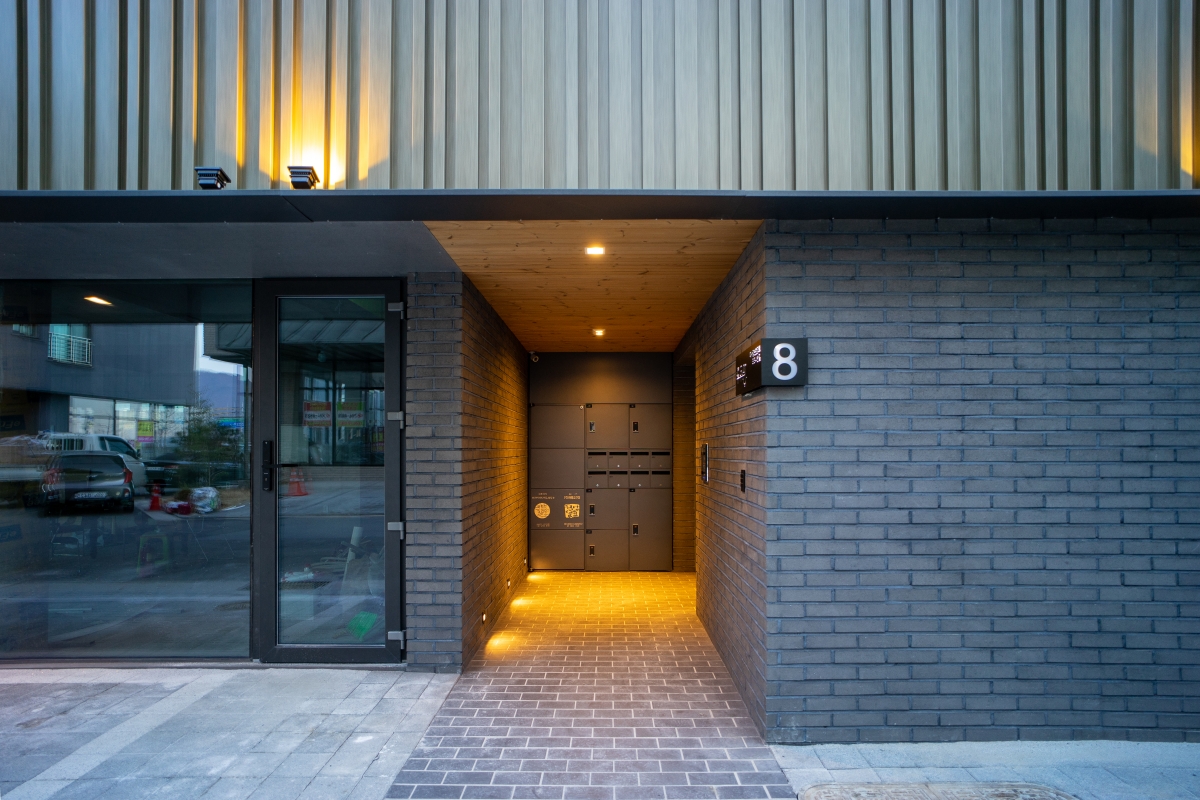 Security was a matter of grave concern to this couple, who were used to living in apartment buildings. They did not feel the same sense of security could be achieved by installing CCTV alone, used as there were to a security office and parking control system. To relieve anxiety about the boundary that lies around their house, I used grey brick tiles for the outer wall and floor on the first floor of woojuwon. I intended to create a sense of psychological stability on their approach to home by using relatively small grey bricks similar to the exterior materials. For the same reason, I selected hot rolled steel of the same tone and dark grey granite in the elevator hall, stairs, and corridor. In this way, the means of entering the house from the neighbourhood becomes an act of tracing one’s steps along the fence of the house which retains a finishing material similar to that of the interior.

The second and third floors of this building are residential spaces for four rental households and have two types of floor plan. The first type is a southwest-facing arrangement, which casts light deep into the house, while the other type features a wide living room window that allows visitors to look at the mountains and the Han River. In order to achieve equity between different plans, we considered the axis in each household. The client’s family occupies the entire space of fourth floor and attic. From the earliest stages of design, they wanted to allocate a lot of space to their energetic child. Two staircases connect the attic and living room to meet this requirement; one of them is between the child’s bedroom and the shared bathroom on the fourth floor, and the other is beyond the couple’s dressing room on the opposite side. The client has noted to me that their child often moves around the attic and living room connected by these two staircases, like a satellite that keeps orbiting several times a day. The child’s bedroom has a high ceiling as it emerges from the slant line that limits the building’s height in order to secure daylight, and it can be connected vertically to the attic. I considered how the child, as he grows, would use this space in three dimensions in the future. 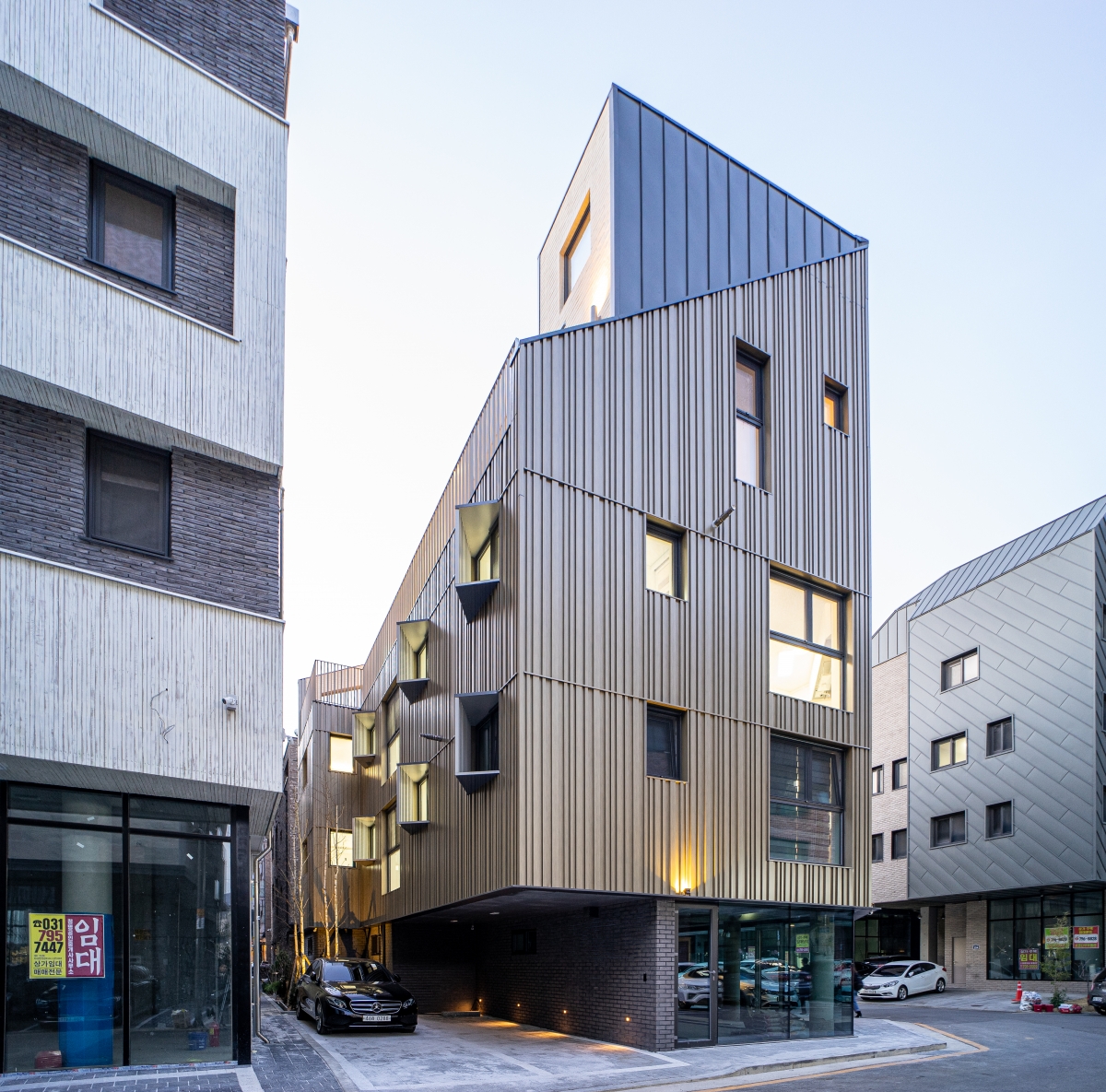