A Space for a Narrative Promenade: The Opening of the Hermès Hyundai Pangyo Store

On Chilseok, the seventh July of the lunar calendar – also known as Qixi in China and Tanabata in Japan – the Herdsman and the Weaver meet, but the next day they part and shed tears of joy and sorrow. Tears became raindrops and fell on the Milky Way, and it is said that it soon turned to heavy rain. Inspired by this tale, the exterior of Hermès Hyundai Pangyo Store now shines with ceramic cylinder modules across its wall in the five colours of the Milky Way, reminiscent of scattering tears. Hermès Hyundai Pangyo is a 537m² store designed by RDAI (artistic director, Denis Montel) an architectural agency that has collaborated with Hermès for more than 40 years, and opened on Oct. 7, 2022. Denis Montel, who was in charge of the design, explained the opportunity presented by this focus on the tale: ʻWhenever we start a project, we collect documents related to the city or country; and one of our staffs found the fairytale of the Herdsman and the Weaver’. The first floor of the store is composed of a classical geometric structure arranged symmetrically around the entrance to express ‘the separation of two lovers and a world divided in two’. The interior space was created through ‘close collaboration with craftsmen and artists who work on traditional materials such as lacquer and the finest textured silk’. They grappled with creating harmony between different materials such as terrazzo flooring, carpet, Korean wallpaper, and the ceramic wall. Denis Montel noted, ‘Department stores are designed to create a strong feeling to attract customer’s attention, but we focused on finding connections with the cultural background of the region. […] ʻI hope the Hermès Hyundai Pangyo Store goes beyond consumption and becomes a space in which visitors can enjoy a leisurely stroll’. Looking into the show window, one notices that the silk panels woven by the traditional Korean weaving method have been hung in layers between the interior space and the glass. Beyond these panels, which combine warm and cold colours like the sunset on the eve of Chilseok, one glimpses fashion jewellery collections, perfume and beauty products on the left side of the entrance, home collections and horse-riding equipment on the right. Entering the interior through the terrazzo stone floor at the entrance with the Ex-libris logo, the symbol of Hermès, curved walls of various colours ranging from clear skies to thunderstorms have been finished with a champagne-coloured lacquer to divide the space. Beyond that, on the left, is a curved surface wrapped in traditional textured fine silk, and on the right, a straight cherry wood wall showcases the universe collection.Choi Jae-eun, who presented steppingstone works made using melting barbed wire in the Demilitarized Zone (DMZ) at the 2016 Venice Biennale, also participated in this opening. The work was completed with the artist’s performance of carefully stacking glass plates with trimmed corners on both show windows of the storeʼs exterior, signalling the storeʼs opening. The physical properties of glass through which light is transmitted meet the artist’s aesthetics, maximising the refined nature of the space. Choi’s installation, Hermès, Crosses Pangyo, will be on show until the end of Jan. 2023. 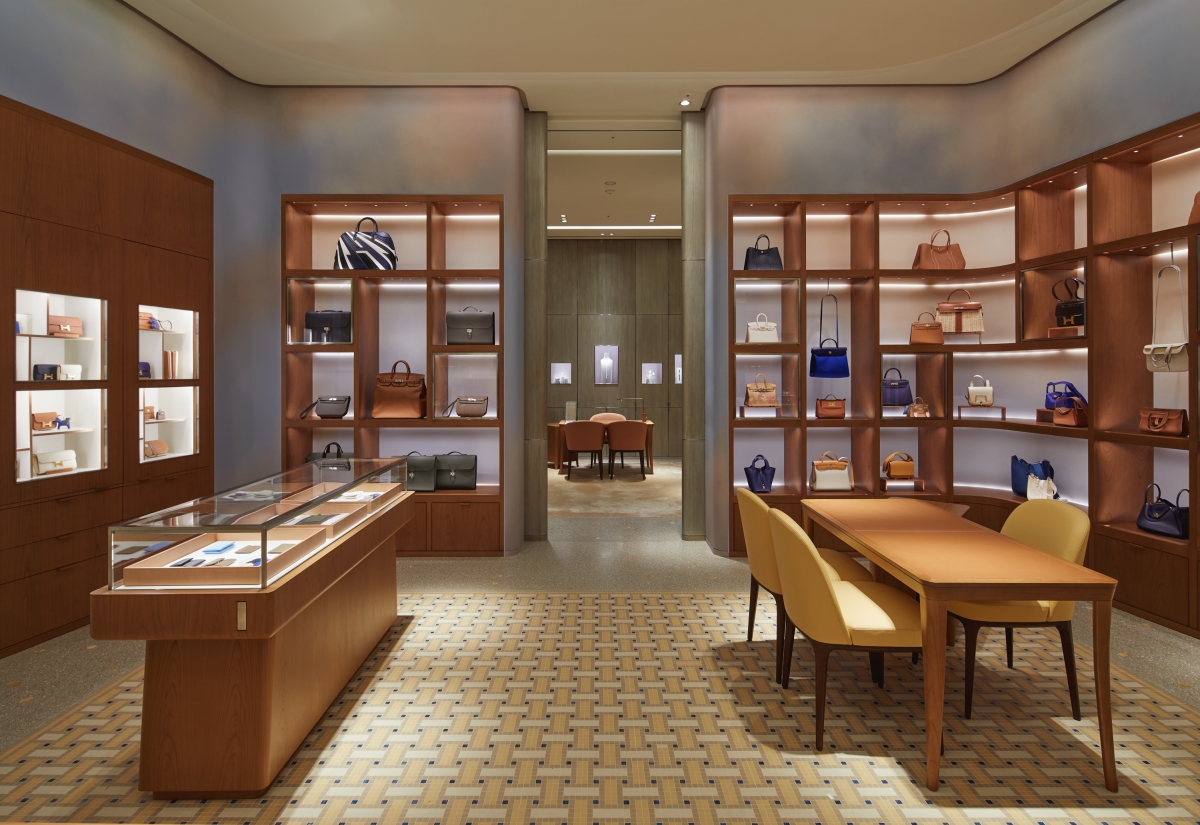