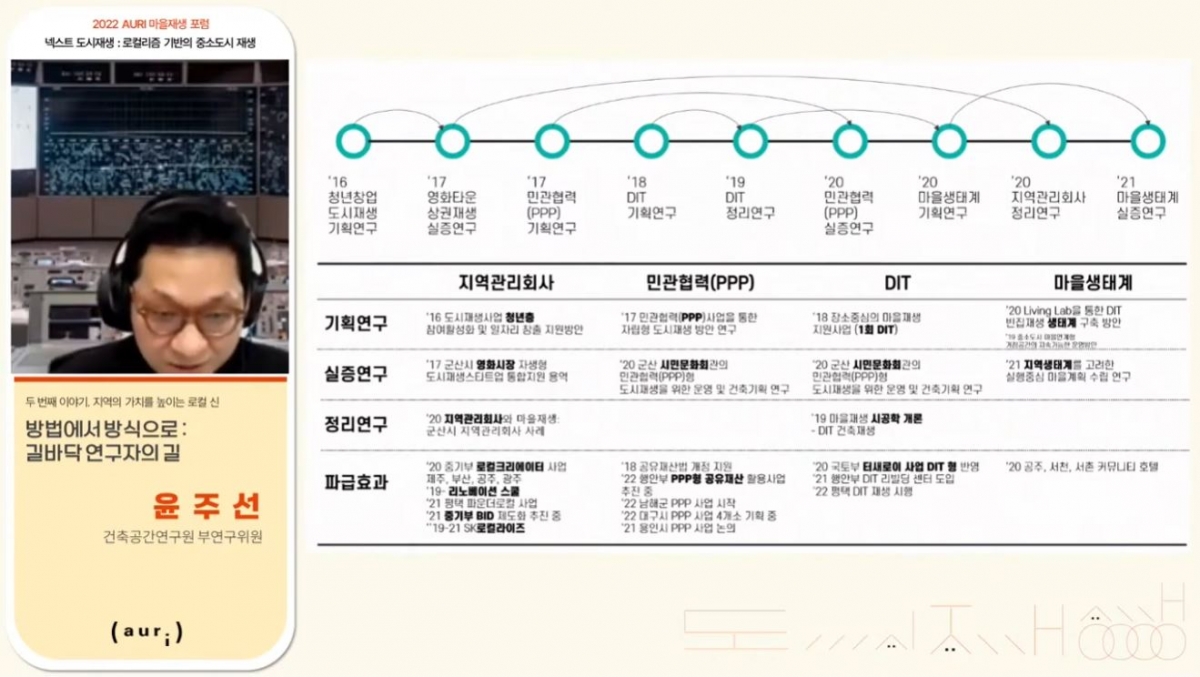 On Jan. 27, the village regeneration forum ‘The Next Urban Regeneration Revitalization Plan: Localism-based Regeneration of Small and Medium-Sized Cities’ hosted by the Architecture & Urban Research Institute (hereinafter auri) was broadcast live online. This seminar was prepared to explore proposed directions for small and medium-sized cities in the provinces that are in danger of population decline and extinction. Themes were divided between local players who change the region, local scenes that increase the value of the region, and the localism of a sustainable ecosystem in the region. Park Juro (principal, Romor), who was the first speaker, introduced the anchor company, citing Yangyang’s surfer’s beach and Jeju haenyeo’s kitchen as key examples. If there is such an anchor company, it was suggested that it would serve as the foundation for urban regeneration as it can both support small and medium-sized enterprises in the region and create new jobs. Lee Changgil (principal, Gaehangro project) announced an Open Sea project that will coexist with regional elements based on local resources. Open Sea Road is located in the old city centre of Incheon, defined by its many long-established stores, and Lee Chang-gil wanted to revampe them and forge a collaboration between Open sea Beer, a local liquor, and the old stores. This was to be a way of promoting both the product and the long-established stores by using the elderly owners as models for beer promotional posters. In this regard, Yoon Zoosun (associate research fellow, auri) pointed out that the field of urban regeneration these days is based on regional specialisation, but that the research often does not reflect this. He said the traditional means of categorising best practices, creating guidelines, and disseminating them across the country, is no different from creating a franchise, rendering it unsuitable for use. In addition, he proposed methods such as accommodating the diversity of its users by focusing on a research team rather than just one researcher, and improving the system to flexibly respond to unexpected situations occurring in the field. Seo Soojeong (senior research fellow, auri) presented a localism-based revitalisation direction for small and medium-sized cities. He pointed out the tasks that need improvement for regeneration, such as a system for establishing a regeneration plan and a method of receiving government subsidies. The research added, in which we saw the decline of the original downtown of small and medium-sized cities as the same living area, forming a network between them, and to propose an improvement plan that provides a way for the region to live within the local government and receive support accordingly. In addition, Jang Minyoung (director of community rehabilitation center, auri) focused on local migration and the experimental settlement of young people, while Kim (principal, MYSC) focused on diversification and collaboration in urban regeneration: startups, impact investment, and social innovation. The seminar material can be viewed on the Auri official website and the video has been uploaded on the Auri official YouTube page.