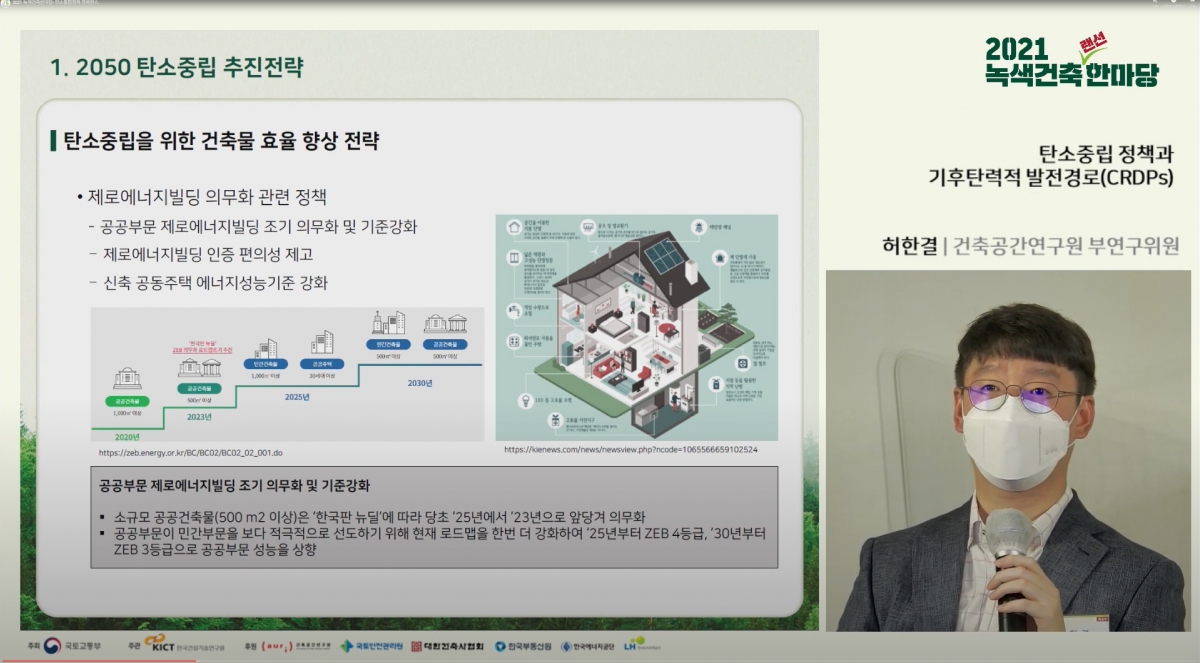 As part of the 2021 Green Building Festival, the Carbon Neutral Policy Conference was held on 29 September. Hosted by the Ministry of Land, Infrastructure and Transport (MOLIT) and organised by Architecture & Urban Research Institute (auri), the seminar, which was held at COEX in Samseong-dong, Seoul, was broadcast live online. Heo Hankyeol (researcher, auri), who made his first presentation on the theme of climate-resilient development pathways, explained that 1.5°C warming is a certainty compared to projections pre-industrialisation, not only reducing greenhouse gas emissions but also adjusting to scheduled climate change. In addition, it introduced the concept of a ‘climate-elastic development path’ that would satisfy both sustainable development goals and the Paris Agreement, as well as achieve greater equality and well-being. As a way of responding to climate change using climate-elastic development paths, urban plans that consider both mitigation and adaptation, such as improving urban structures and introducing green infrastructure, were also mentioned. Heo stressed that there are countless climate elastic development paths, and the results are still unclear, so further research is necessary to establish paths suited to the unique situations in each country and region. Lee Haksung (professor, Chungbuk National University) then presented on the theme of Japan’s Carbon Neutral Building Policy Trend, while Park Jonghun (researcher, auri) presented on the plan to Reduce the Heat Island of Building Small Green Areas for Carbon Neutralisation. Small-scale green areas serve as a carbon absorption source and as a reduction source in the city through parks, street green areas, building green areas, and rooftop green areas. Park explained, in a study of Seoul and Texas, the shape and size of green areas and where they should be located to reduce the heat island effect and its overall effect and cold island range. Finally, Ji Seokhwan (researcher, auri) presented on the carbon neutral policy issue of local green building construction plans, detailing a number of policy consistency issues and the insufficient interrogation and representation of regional characteristics.